On May 6 I posted a piece on racism and human genetics, making the point that while some early human geneticists promoted eugenics (this doesn’t happen any more), there were other geneticists who explicitly opposed it. I wrote it to counter an article by Lea Davis in Scientific American (of course), who claimed that white supremacy is baked into the structure of human genetics and that the field still carries the burden of white supremacy. Anyone actually studying human genetics in a university knows that Davis’s accusations are not true.

Here’s a short excerpt from my article that gives the tone of my piece, which is critical but not, I think, uncivil:

Beyond that, we have the multiple Kendi-an accusatons that all human geneticists are complicit in racism and white supremacy. A few samples [from Davis’s piece]:

How do we teach and talk about this incredibly problematic history? Despite the many scholarly texts available, there is rarely an open and frank acknowledgement that the very foundations of our field were rooted in the false and dangerous beliefs of biological race and human racial hierarchies. Today, there is an effort to distance modern genetics from the harms of eugenics. This shameful aspect of our shared history is often separated from the primary curriculum for human genetics trainees, relegated to classes in “ELSI” (ethical, legal and social issues), which are usually electives—or, worse, just one day of training. In large part, we are failing to disclose this startling racist legacy to young scientists entering the field; a sad irony for a discipline devoted to human inheritance. Our failure to acknowledge the racist origins of modern genetics also has repercussions in our (in)ability to attract and retain members of underrepresented communities in genetics and other STEM training programs. Thus, as time marches on, the knowledge of our harmful racist history is fading while the culture of whiteness continues to dominate.

No, there is an effort to teach people about the history of our field. But that should not include the accusation that STEM is racist, for every school I know of is trying to “diversify” STEM as hard as we can. The issue is a “pipeline problem”: few minority candidates have reached the Ph.D. stage. That itself reflects older racism, but not racism imbuing human genetics, for scientists are pretty much anti-racists.

Further, the “very foundations of our field were not rooted in racism”. Yes, some famous geneticists believed that, but by no means all. Was the monk Gregor Mendel a racist? Were the re-discoverers of Mendelism, Hugo DeVries, Carl Correns and Erich von Tschermak, determined to imbue the field with racism? Not that I know of. How about the popularizers of modern genetics: people like T. H. Morgan, Theodosius Dobzhansky, Alfred Sturtevant, Calvin Bridges, Sewall Wright, and J. B. S. Haldane? Nope. You can mention Ronald Fisher in support of racism, but his eugenics was based on poverty, not race, and at any rate never got purchase. No, our field is not founded on racism.

And I gave several articles by famous geneticists of the 20th century who opposed eugenics.

The article certainly provides an opportunity to debate Davis’s claims versus my own, but when someone tried to do that, a ruckus ensued. Here’s a comment that a reader made on my post this morning on “social constructs” (click on the screenshot to go to the comment): 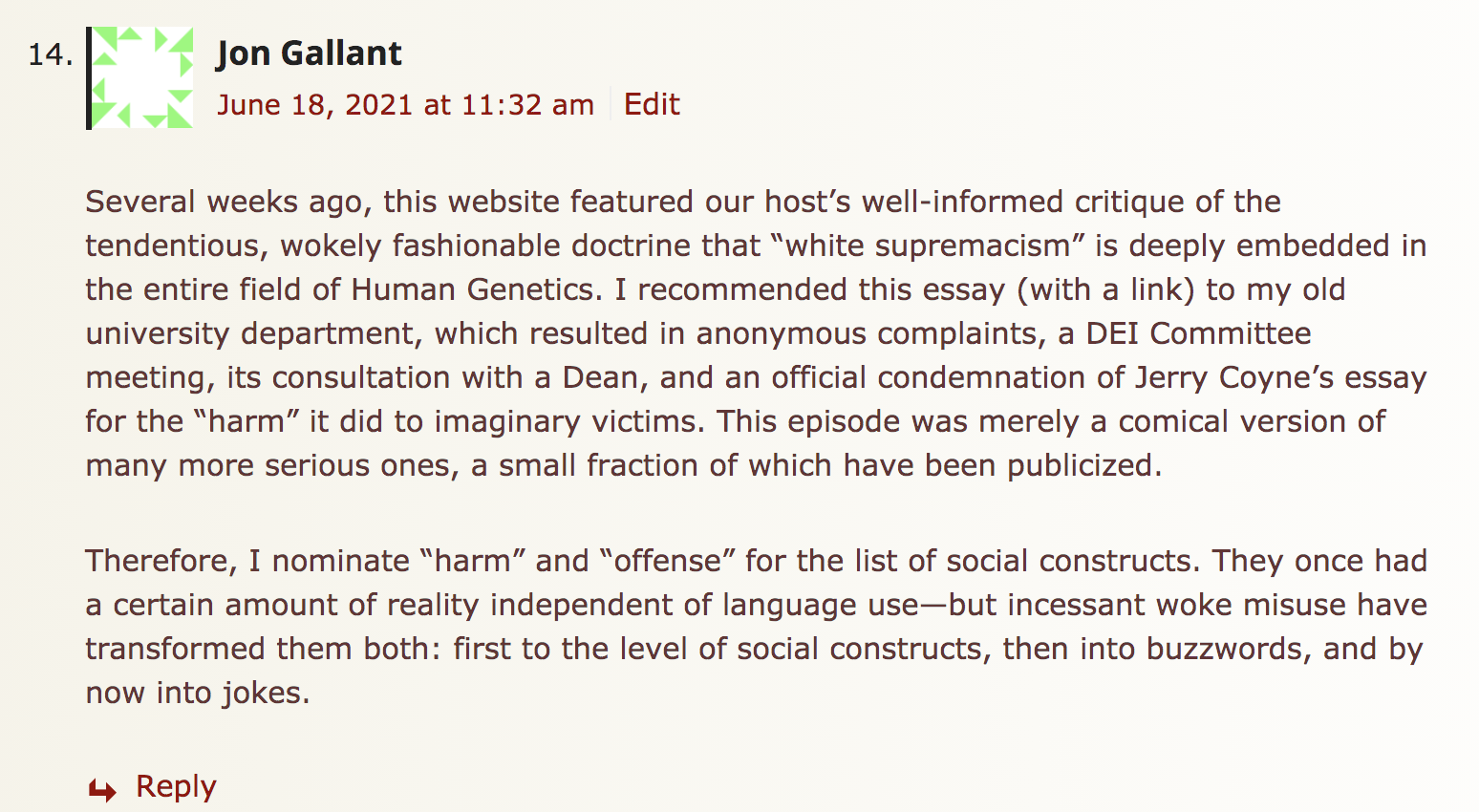 I have been officially condemned! Well, I’m not going to defend myself here; you can read my piece for yourself and judge for yourself. I further deny that it could cause “harm” to anyone who didn’t already have psychological issues, and I assert that a robust debate on these issues is exactly what this benighted university (I don’t know which one) needs but is trying to prevent.

Shame on that department, and shame on that university! For their actions are inimical to the very purpose of the university: to say your piece, adduce what facts you have, and let students hash out the issues in class or even in their own brains.