All geneticists know, and knew decades ago, that we had a shameful period in our history, particularly human genetics. (This was not predominant, but a blind alley.) Some geneticists, like Galton and Davenport, were explicit “negative eugenicists”, urging sterilization or discouraged breeding of the “inferior”, including not only those who were deemed mentally deficient or of lower class but also those of other races. This history has been reemphasized recently with the rise of anti-racism, and it’s good that we’re constantly cognizant of our past history and its racist (and classist) underpinnings. In fact, this history is already widely taught, but there’s no harm in learning about it—as we should learn the entire history of our field.

What bothers me, though, is the complete neglect of the movement against eugenics that was widespread in America, a history exemplified by articles like these (I’ll try to find links online later). This, too, is part of our history: 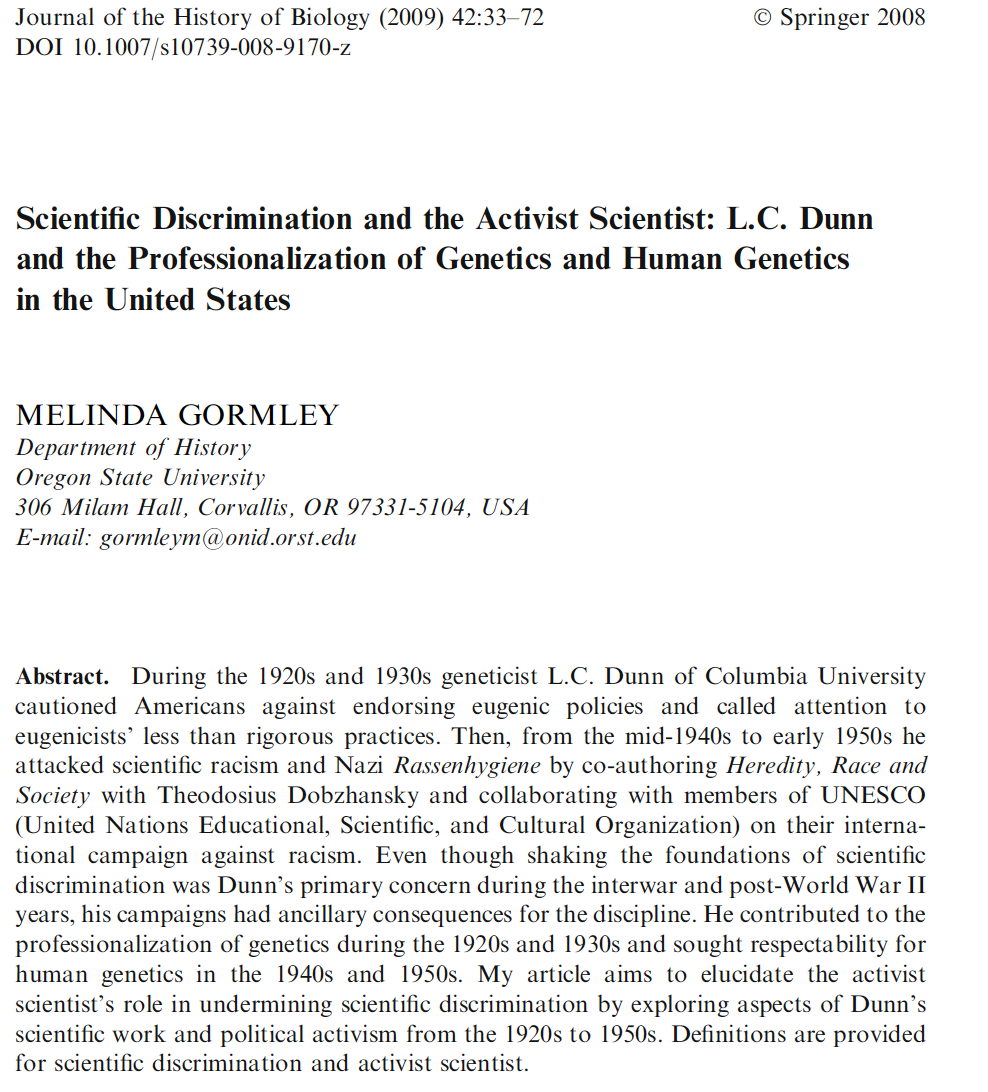 and this, the Presidential Address at the American Society of Human Genetics in 1961

You never see this pushback mentioned in the histrionic accusations, like the one below by Lea Davis in the increasingly woke Scientific American, that human genetics in America and the UK not only has a racist past (partly true) but also a racist, white-supremacist present (not true). Lea K. Davis is an Assistant Professor of Medicine at Vanderbilt Medical Center.

Now it’s true that in a few places prisoners have been offered completely voluntary sterilization in return for lighter sentences, but this rarely happens. And it’s execrable. But the accusation that human genetics is ridden with racism and complicit with white supremacy is simply false. These are performative accusations, like those John McWhorter mentioned yesterday.

Davis makes a number of overheated statements and at least one contradictory one. The latter involves the existence of “races”. As I’ve written ad infinitum, there are no discrete and easily distinguishable populations that can be classified as “races”, but we do have populations, distinguished by genetic ancestry, that can, if you use many genes, be almost absolutely identified as to self-identified ethnicity as well as geographical location.

Davis argues that “race” is a social construct, a misleading statement that needs considerable explanation, which she neglects to provide.

Together, could we dispel the myth of biological race? Again, we cannot do this alone, as most of us are ill-equipped to confront the rhetorical science misinformation bombarding society on a daily basis. Engaging experts in strategic science communication, along-side of social scientists and geneticists, is mission critical to meaningfully de-biologizing race.

Let’s ditch the loaded term “race” and just use “ancestry” or “ethnicity”, recognizing that there is substantial genetic information in one’s genome that not only tells you what your self-identified race is with substantial accuracy, but also gives you a good idea of your ancestry and geographic origins. “Race” may be a social construct, but “genetic differentiation of populations” is not.  And Davis makes the mistake of saying that “race” (let’s use “ethnicity”) is something completely different from ancestry:

Others routinely, if naïvely, perpetuate the scientifically inappropriate conflation of race and ancestry. The trouble is that most human geneticists know very little about race. Scholars in sociology, anthropology, critical race theory, gender studies, etc. who have a far more sophisticated understanding of the origins of race and racism, have so much to teach us.

She’s dead wrong here. I’d rather talk about “race” (“ethnicity”) with people like John Novembre or Graham Coop, well known human geneticists, than with critical race theorists or gender studies people, who have no training in genetics, an ideological commitment, and, I’d aver, lack a “far more sophisticated understanding of the origins of race.” Ancestry has everything to do with “race” (read “ethnicity”: it’s differential ancestry that results in geographic populations being genetically different!

But the contradiction is when Davis claims that clinical studies of genes that map near disease genes have largely been conducted on white populations—a form of racism. I don’t think it’s really racism, because white populations are what’s largely available to clinicians (at least locally, as they draw participant from their local universities in Europe and the US), but I’ll grant her that we need to do such studies in people of different ethnicities. But if race is a social construct, on what basis can we do “ethnicity-based” genetic analysis of disease propensity? If ethnicity or race are social constructs that have nothing to do with biology, working on one group is as good as another. That’s not the case, of course: groups differ in their genes and their propensity to get different diseases (cultural differences surely also play a role). You need to IDENTIFY ethnicity to do such work!

Note how she throws in the accusation of explicit and systemic racism for this concentration on focal populations:

Lack of diversity in available genetic data is not an accident; it is an inevitable consequence of systemic racism in biomedical research. The difficulty in recruiting non-European populations into genetic research today is a direct result of our history of white centering, gatekeeping by white academics and decades of human rights abuses suffered at the hands of white researchers. White centering is still so embedded in human genetics that even though we recognize these problems, millions of dollars are being invested in programs to capitalize on Eurocentric genetic scores and tests that are primarily effective for people of European descent, potentially leaving communities of color behind in precision medicine advancements.

If we are to do these tests, we must label people by their ethnicities, for we’ll otherwise have no data. In fact, this is being done right now, so Davis is exaggerating.  She simply must recognize a finite number of ethnicities to do this work, for otherwise it’s of no value. (Furthermore, to have full representation, studies should be done in Africa, but white doctors attempting to collect African data are at risk of being accused of racism and colonialism.

Beyond that, we have the multiple Kendi-an accusatons that all human geneticists are complicit in racism and white supremacy. A few samples:

How do we teach and talk about this incredibly problematic history? Despite the many scholarly texts available, there is rarely an open and frank acknowledgement that the very foundations of our field were rooted in the false and dangerous beliefs of biological race and human racial hierarchies. Today, there is an effort to distance modern genetics from the harms of eugenics. This shameful aspect of our shared history is often separated from the primary curriculum for human genetics trainees, relegated to classes in “ELSI” (ethical, legal and social issues), which are usually electives—or, worse, just one day of training. In large part, we are failing to disclose this startling racist legacy to young scientists entering the field; a sad irony for a discipline devoted to human inheritance. Our failure to acknowledge the racist origins of modern genetics also has repercussions in our (in)ability to attract and retain members of underrepresented communities in genetics and other STEM training programs. Thus, as time marches on, the knowledge of our harmful racist history is fading while the culture of whiteness continues to dominate.

No, there is an effort to teach people about the history of our field. But that should not include the accusation that STEM is racist, for every school I know of is trying to “diversify” STEM as hard as we can. The issue is a “pipeline problem”: few minority candidates have reached the Ph.D. stage. That itself reflects older racism, but not racism imbuing human genetics, for scientists are pretty much anti-racists.

Further, the “very foundations of our field were not rooted in racism”. Yes, some famous geneticists believed that, but by no means all. Was the monk Gregor Mendel a racist? Were the re-discoverers of Mendelism, Hugo DeVries, Carl Correns and Erich von Tschermak, determined to imbue the field with racism? Not that I know of. How about the popularizers of modern genetics: people like T. H. Morgan, Theodosius Dobzhansky, Alfred Sturtevant, Calvin Bridges, Sewall Wright, and J. B. S. Haldane? Nope. You can mention Ronald Fisher in support of racism, but his eugenics was based on poverty, not race, and at any rate never got purchase. No, our field is not founded on racism.

And here’s how we’re still racist:

When we identify white supremacy as the paramount problem in our field’s history, it becomes clear that it is still our problem today. Lack of diversity in available genetic data is not an accident; it is an inevitable consequence of systemic racism in biomedical research.

and this; note the reference to structural violence and our complete complicity (my emphasis). The last sentence might has well come from the pen of Ibram Kendi:

Human genetics is a science that I love, a science to which I have devoted my life, and a science that I believe could be a powerful force against racist ideas in medicine and society. But this potential can only be reached if we are willing to reckon with our role, collectively and individually, past and present, in upholding white supremacy and structural violence in science and academia. As educator and author Catrice M. Jackson has observed, “If you don’t have an antiracism plan, you plan to be racist.”

It is ludicrous to claim that if we don’t have an antiracism plan, we plan be racist. Colleges are already doing their best to get women and minorities into STEM by various programs. That is our antiracism plan, and Davis cannot ask more. Society needs a plan that widens the pipeline, allowing equal opportunity for all to pursue their interests, but this has nothing to do with the supposed ongoing racism in human genetics.

An antiracism plan will require challenging everything from the speed to the priorities of human genetics research, but if we are serious about reducing health disparities through precision medicine we must push back on the culture of whiteness in medicine and research. We can begin by explaining that equitable translation of genetic medicine will be a slow process because of the inequity that our field has already created. Efforts to increase diversity among scientists are desperately needed, and unless we are committed to dismantling inherently racist structures and ideas in science, we will never achieve real equity.

We can empower ourselves and each other to acknowledge our own complicity and call on our funding institutions, our professional societies and our departments to make antiracist action a priority in our daily research practices. The long-overdue awakening emerging in American consciousness is incongruent with business as usual in our field, and it is past time to call in the revolution. Human genetics needs an antiracism plan now, otherwise, we must admit we plan to be racist.

I reject her claim that I’m complicit in racism, even though I’m a fly geneticist. Is Davis unaware of what is being done now? I find it hard to believe her claims, for she raising as a new challenge what is largely a problem already being rectified. As for the “calling in the revolution”, that’s like “sending in the clowns”: “Don’t bother, they’re here.”

As for human genetics being inhabited by figures in pointy hats and white robes, Davis is dead wrong. Genetics was not founded on white supremacy, and although we had racists and bigoted episodes that had some serious consequences, they are largely gone, nor do I see them returning. We are not engaged now in propping up white supremacy.