Is there anybody who doesn’t like Stephen Fry? He’s so genial, so learned, so witty, so open and honest, and so disarming that I can’t imagine not feeling affection for him. But he’s left Twitter from time to time because of nasty remarks, and I suspect that many religionists don’t like his atheism nor homophobes his homosexuality. But screw them; he’s great!

In this week’s New York Times Magazine, there’s a very good interview with Fry by David Marchese (click on screenshot). Every bit is worth reading, especially if you want to know what a polymath is like (Fry not only absorbs material like a sponge, but also has a compulsion to tell people what he learned). 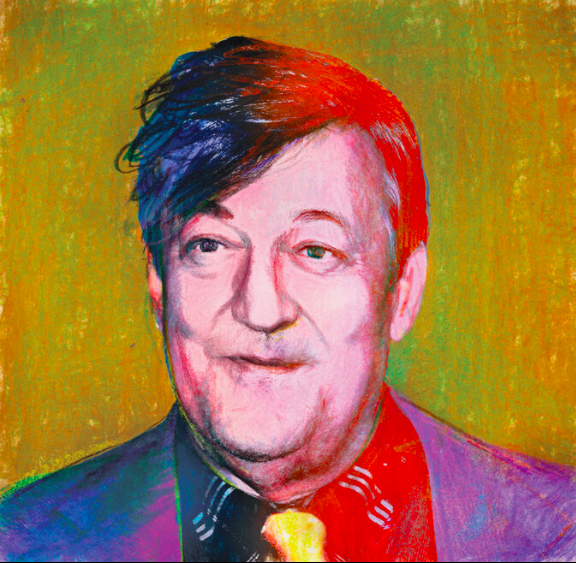 There are tons of good and revealing things here: his view on the need for humor, his 15-year period of celibacy, an almost-unprintable story of Gore Vidal at the Savoy Hotel in London, and his view on free will. I’ll give just three quotes, one of which is actually pro-woke. Marchese did a great job on this interview; his questions are in bold and Fry’s answers in plain type.

Do you ever wonder where your old friend Christopher Hitchens would fit into things now?

I do. I loved him. He was adorable company, but I was also quite scared of him. He was a much tougher figure than I. He didn’t mind being disliked. He didn’t mind being howled down even. He seemed to enjoy it. I can quite imagine Hitchens being on the same platform with a Ben Shapiro perhaps. But I can’t imagine him having come out on the side of Trump. Hitchens just had a style that suited America despite his Britishness. It was the swagger. I miss that the culture doesn’t have enough of these sorts of people. Toward the last year of his life, I would visit another one of them, Gore Vidal, in Los Angeles, where he had his house; it was so overgrown in the garden that it was dark inside. He would retell stories of his great rows with Norman Mailer and Susan Sontag and William Buckley. Their arguments could be mordant and full of venom, but they weren’t as unhappy as so many debates now. There was a kind of joy and pleasure in the fight. [Be sure to read Fry’s Gore Vidal story!]

Ben Shapiro? I would like to think that Hitchens deserves a worthier opponent. And so does Marchese:

You mentioned Ben Shapiro.I’m not sure that people would agree that he’s quite the right comparison for Christopher Hitchens.

I mean, yes, I find Ben Shapiro abrasive. This anti-woke nonsense that he — a lot of it is disingenuous at best and malevolently blind at worst.There are people who have been denied any say in the way the world goes or even allowed a voice in expressing their experience, their stories, their lives, and it’s great that this is slowly being put right. It’s a shame that people of my background so often take it in a moaning way, as if it’s an assault on our gender and race.

He has a point, but I don’t think Fry fully realizes the excesses of wokeness. What would he say about Kimono Wednesdays being picketed at Boston’s Museum of Fine Art, for instance? Or the demonization of the n-word to the point that you’re in trouble if you say a Chinese word that sounds like it? Or the accusation that yoga and lattes are aspects of white supremacy?

But let’s move on to free will.

You said earlier you’ve been reading philosophy. Is there a particular idea that you’re tickled by lately?

I suppose the real biggie is free will. I find it interesting that no one really talks about it: I would say that 98 percent of all philosophers would agree with me that essentially free will is a myth. It doesn’t exist. That ought to be shocking news on the front of every newspaper. I’m not saying we don’t look both ways before we cross the road; we decide not to leave it to luck as to whether a car is going to hit us. Nor am I saying that we don’t have responsibility for our actions: We have agency over the body in which our minds and consciousness dwell. But we can’t choose our brains, we can’t choose our genes, we can’t choose our parents. There’s so much. I mean, look at the acts of a sociopath, which are performed with absolute will in the sense that he means to do what he’s doing, but he’s doing it because he has desires and impulses which he didn’t choose to have. Nobody elects to be a sociopath. The difference between us and them is one of degree. That certainly interests me. But, generally speaking, I suppose ethics is the most interesting. You do wonder if there are enoughpeople in the world thinking about the consequences of A.I. and technology.

Well, yes, lots of us talk about free will. But Fry, it seems, is misinformed, for he doesn’t seem to grasp the Dennettian view (common on this site) that we already have plenty of free will—the only kind worth wanting. Actually, Fry is of course is talking about determinism and contracausal free will here, and I suppose his emphasis on its being in the newspapers reflect the failure of the general public to fully grasp determinism, even though many commenters think that few people accept contracausal free will.

But don’t kvetch at me—Fry said it! Go tell him on Twitter that we really do have free will!

And read the rest of the interview; it’s a pure joy.

I met Fry only once: at the Hay Festival on the border of Wales and England, where I struck up a brief acquaintanceship with Tom Stoppard. I joined Stoppard at the table where he was having a smoke, and couldn’t resist the temptation to bum a smoke from the great playwright. Fry was sitting there, too, but didn’t know me, so I just basked in the Big Man’s greatness. It’s the closest I’ve ever been to such a table full of talent!