The theme of today’s post is threats to amphibians. 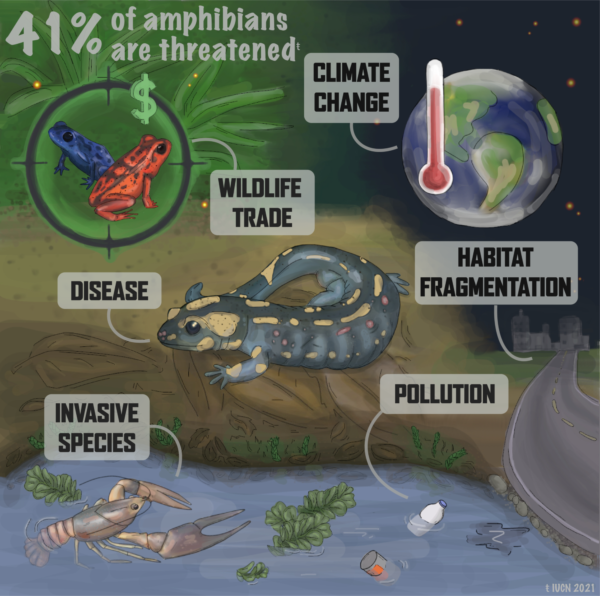 In the above graphic, “41%” of amphibians are threatened”, may seem improbably precise, since threatened species are usually identified by the realization that some species is under threat, which then gets the species added to the IUCN’s Red List, an authoritative compilation. But the Zoological Society of London‘s Institute of Zoology has for a decade been implementing a “Sampled Red List Index“, which, instead of seeking out threatened species, assesses a large, random, sample of an entire higher taxon, thus giving a valid estimate of the proportion threatened. (I worked on the reptile SRLI, which assessed 1500 species).

One major threat to amphibians has been the global spread of the chytrid fungus, Batrachochytrium dendrobatidis, which infects amphibians and can wipe out whole populations and species. Chris Petersen, of Department of Defense Partners in Amphibian and Reptile Conservation, sent me links to the following reports on surveys and assessments that have been conducted concerning the chytrid threat to amphibians inhabiting military lands.

Report 1: Do Frogs Get Their Kicks on Route 66?

Report 2: From the Mountains to the Prairies Seasonal Bd Responses Differ by Latitude and Longitude at a Continental Scale

I especially liked the first survey, a transcontinental transect study from California to Virginia; it found chytrid at all but one location.

This and the second study were coauthored by, among others, my colleagues Rob Lovich and Mike Lannoo; Rob has previously treated WEIT readers to World Snake Day, and Mike has authored or coauthored several major works on amphibian conservation, including the monumental Amphibian Declines: The Conservation of United States Species. (The titles of these two reports also show the authors’ knowledge of song lyrics!)

We’ll finish off today’s installment with the non threatened Wood Frog (Rana sylvatica), which is widespread in North America. A northern species, a number of relict populations have survived in mountains south of the main range, left behind as the species followed the retreating glaciers north. This fellow’s from the main range in northern Minnesota, near Lake Superior.