Six days ago I reported that the incoming University of Chicago Undergraduate Student Government (USG) issued a statement in conjunction with the anti-Semitic organization Students for Justice in Palestine. This is an official position of the U of C’s student government (click on document to enlarge or to see it in situ). 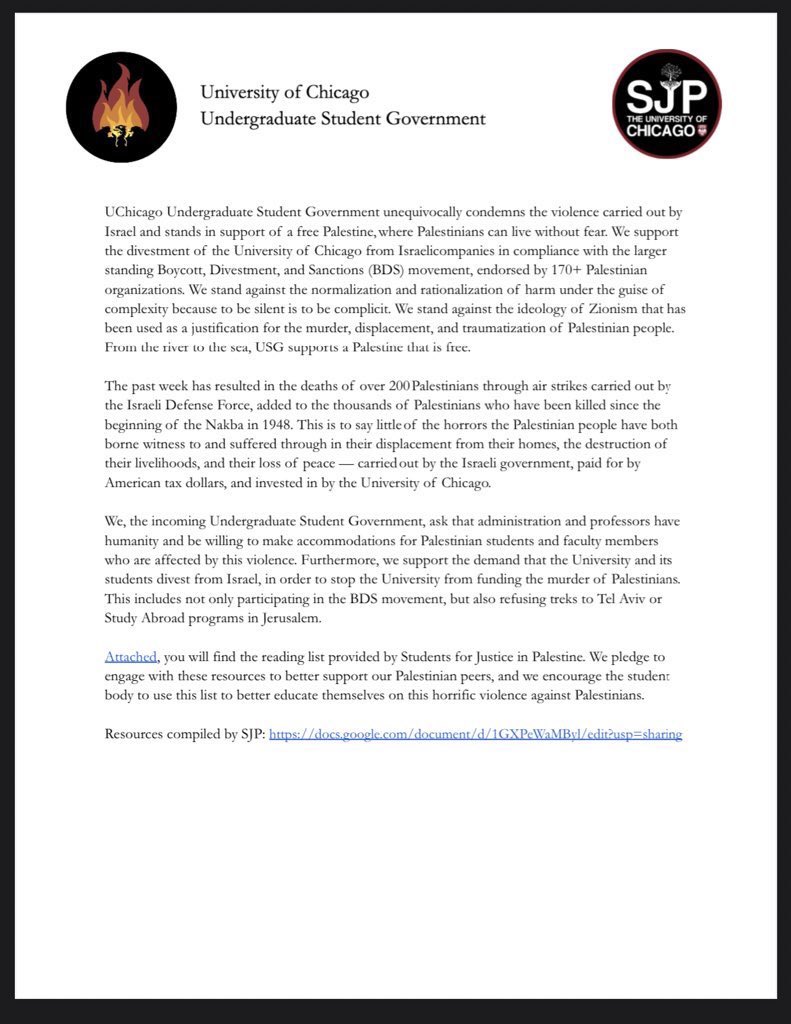 The support for BDS and anti-Zionism I see as manifestations of anti-Semitism, and, as I wrote yesterday about a Scientific American op-ed, this statement, leaving out the malfeasance of Palestine itself, is grossly misleading, if not an arrant lie. And of course saying “From the river to the sea, USG supports a Palestine that is free” is precisely the student government’s calling for the elimination of Israel.

The University of Chicago is, as per its Kalven Principle, politically and ideologically neutral (not always in practice, though), so as I wrote in my last article:

In a response issued yesterday by President Zimmer and Provost Lee, “Campus discourse and international conflict,” the University administration affirms its neutrality in this issue but condemns bigotry on all sides, which is in accordance with the Kalven Report, one of our founding principles that affirms official University neutrality on moral, ideological, and political issues.

Now the student government, which is an elected body and not an official unit of the university, can bloody well make all the statements it wants. I’m not going to report them or say that they’re violating University principles. But the statement above made me feel, for the first time in 35 years, that I’m surrounded by students who would damn me just for being a Jew who supports the existence of Israel (i.e., a “Zionist”).  I’m not of course a religious Jew but a secular Jew from a religiously Jewish background, and at any rate nobody deserves to be criticized solely for their ethnicity.

When Jewish students and student organizations like Hillel objected to this resolution, the student government decided to vote on this statement again as well as decide whether to apologize to Jewish students for it. As our campus newspaper, The Chicago Maroon, reported two days ago, this attempted retraction and the apology, both failed. The statement above stands, and I am an apostate. The student government at the University of Chicago officially professes anti-Semitism. Let this be known to the donors and parents of prospective students!

The vote was made by email, and the results will not be made public. Now that is pure cowardice! Even the votes of American congresspeople are public, and don’t students deserve to know how their representatives voted?

This is a shameful resolution, though it violates no University regulations. It shows that our student body is just as wokey, au courant, and ignorant about current affairs as are the editors of Scientific American.