Well, the latest scientific journal or magazine to go to hell in a handbasket is Scientific American, which under the editorial guidance of Laura Helmuth has published a putrid piece of pure pro-Palestinian propaganda. It’s an op-ed piece apparently written by a group of Palestinian BDS activists (one author wishes to be anonymous). purveying the usual distortions, omissions, and outright lies.  If there were a counter piece refuting those lies (there is below, but not at Sci Am), it would be somewhat better, but not much. Instead, the op-ed is linked to a Google Document petition (surely not posted by Sci Am) that you can sign in solidarity with Palestine.

First of all, a science magazine has no business taking an ideological stand like this, particularly one replete with lies and distortions. What was Scientific American thinking? Do they fancy themselves to be Mother Jones? Read for yourself. 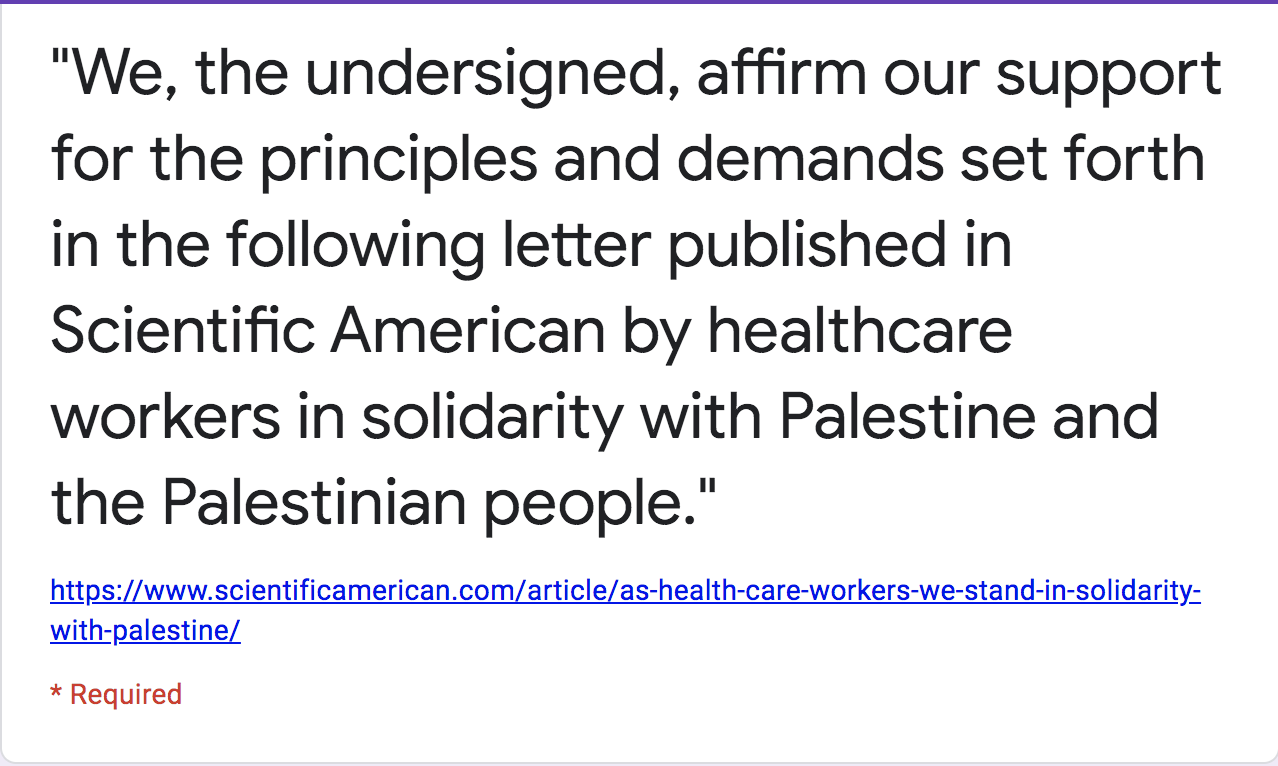 The article has the usual palaver, but its biggest distortion is accusing Israel of war crimes and targeting civilians, when the truth is precisely the opposite: during the recent skirmish, the Palestinians fired 4,360 rockets deliberately targeting civilians, while Israel avoided civilian killing to the best of its ability while trying to disable Hamas. Israel issues warnings before attacking; does Palestine do that? No, because their aim is to kill civilians without warning. How come nobody, least of all these authors, mention that?

The article decries the “disproportionality” of deaths, when many Palestinian dead (perhaps more than half) were Hamas fighters, and the op-ed seems almost regretful that more Israelis did not die (the “disproportionality” argument makes little sense when one side has an Iron Dome and the other side fires rockets and has no defense). There is no mention of Palestinian war crimes, which include not just the targeting of civilians but the use of human shields that guarantee civilian deaths.

The article blames Israel for not supplying healthcare, including COVID vaccines,  to the Palestinians. But in fact the Oslo Agreement specifies that responsibility for healthcare in the Palestinian Territories resides solely with the Palestinian Authority, and that specifically includes vaccinations. (It also doesn’t mention that Israel did supply a lot of COVID vaccine to Palestine, even to its leaders.) The article supports the BDS movement, a thinly veiled attempt to eliminate the state of Israel. The article indicts Israel for being an apartheid state, when in fact the Palestinian Territories are FAR more of an “apartheid state” than is Israel, for Palestine oppresses gays, atheists, apostates, and women, and forbids Jews to live in the Territories or buy property there (the latter is a capital crime). Plenty of Arabs, of course, live in Israel.

The article doesn’t mention the infamous Palestinian “pay for slay” program, in which the families of terrorists who kill Israeli Jews, civilians or soldiers, get ample financial rewards while in prison, and get jobs when they get out. (Here’s a recent example.) How godawful is that? Well, we don’t bring up things like that when we’re defending Palestine.

The Scientific American op-ed is so outstandingly stupid that one can only wonder what the editors of the magazine were thinking when they published it. Did they not do any fact-checking? Or are they abysmally ignorant of what has and is happening in the Israel/Palestine conflict? Why did they “take sides” by publishing the first political op-ed I’ve seen in the magazine (granted, I may have missed some). This angers me because the lies are as invidious as Trump’s claims that the election was “stolen.”

Well, I won’t go on, for the Scientific American screed is fully taken apart by the article below from CAMERA (Committee for Accuracy in Middle East Reporting and Analysis). And yes, by indicting Israel for “war crimes” while completely ignoring the crimes of Hamas and lying to or misleading readers, the op-ed becomes a totally one-sided propaganda piece. Read it for yourself, and then read the article below. It’s a good thing I don’t read Sci. Am.; dreck like this gets called to my attention by readers. I don’t think calling the Sci Am op-ed “shilling for terrorists” to be too far off the mark.

The article also refutes the op-ed’s claim that Israel has “decimated” the Palestinian healthcare system, which in fact is better than ever. (And it would be a very good system if Palestine would start spending money on healthcare instead of offensive rockets, and had it accepted one of Israel’s many offers for a two-state solution.) Do the authors mention that every year thousands of Palestinians, including Hamas leaders and their relatives, are treated in Israeli hospitals as a gesture of good will? No, of course not.

An op-ed so woefully ignorant or biased doesn’t belong in any respectable venue, much less in Scientific American. But I guess we can expect more to come. If you have any respect for the truth, you might ponder if you want to continue subscribing.