Nine days ago I wrote about a published op-ed in Scientific American in which eight healthcare workers took out after Israel, not only blaming that nation for the war and all the deaths of Palestinians, but also for its failure to provide healthcare and vaccinations to Palestinians, as well as for various other deeds. The problem was that most of the accusations were either distortions or outright lies that should have been caught by any knowledgeable editor. Further, the authors failed to call out Hamas and its supporters for any misdeeds, including firing the rockets that started the last conflict. As I wrote at the time:

It’s an op-ed piece apparently written by a group of Palestinian BDS activists (one author wishes to be anonymous). purveying the usual distortions, omissions, and outright lies.  If there were a counter piece refuting those lies (there is below, but not at Sci Am), it would be somewhat better, but not much. Instead, the op-ed is linked to a Google Document petition (surely not posted by Sci Am) that you can sign in solidarity with Palestine.

(Because I consider the BDS movement to be based on anti-Semitism, this is why I’ve given this post the title I did. If you want to argue that the op-ed wasn’t anti-Semitic, or that BDS isn’t, please do so in the comments.)

I also beefed about Scientific American‘s entering the fray by publishing not only an overtly political/ideological article, but a distorted one. There was no fact-checking on the part of the magazine, and there should have been given its obvious lies. Most important, scientific magazines should not be in the business of publishing such editorials, whether they be anti- or pro-Israel. My original critique is below (click on screenshot), and I noted that a better job of dismantling the op-ed’s claims was done in an article by CAMERA, the Committee for Accuracy in Middle East Reporting and Analysis (there’s an update at the top of that link).

And if you click on the screenshot to the Sci. Am original op-ed piece, you now find that it’s no longer there. It’s been replaced by this terse statement:

“This article fell outside the scope of Scientific American and has been removed.”

This is what you see (look below the photo): 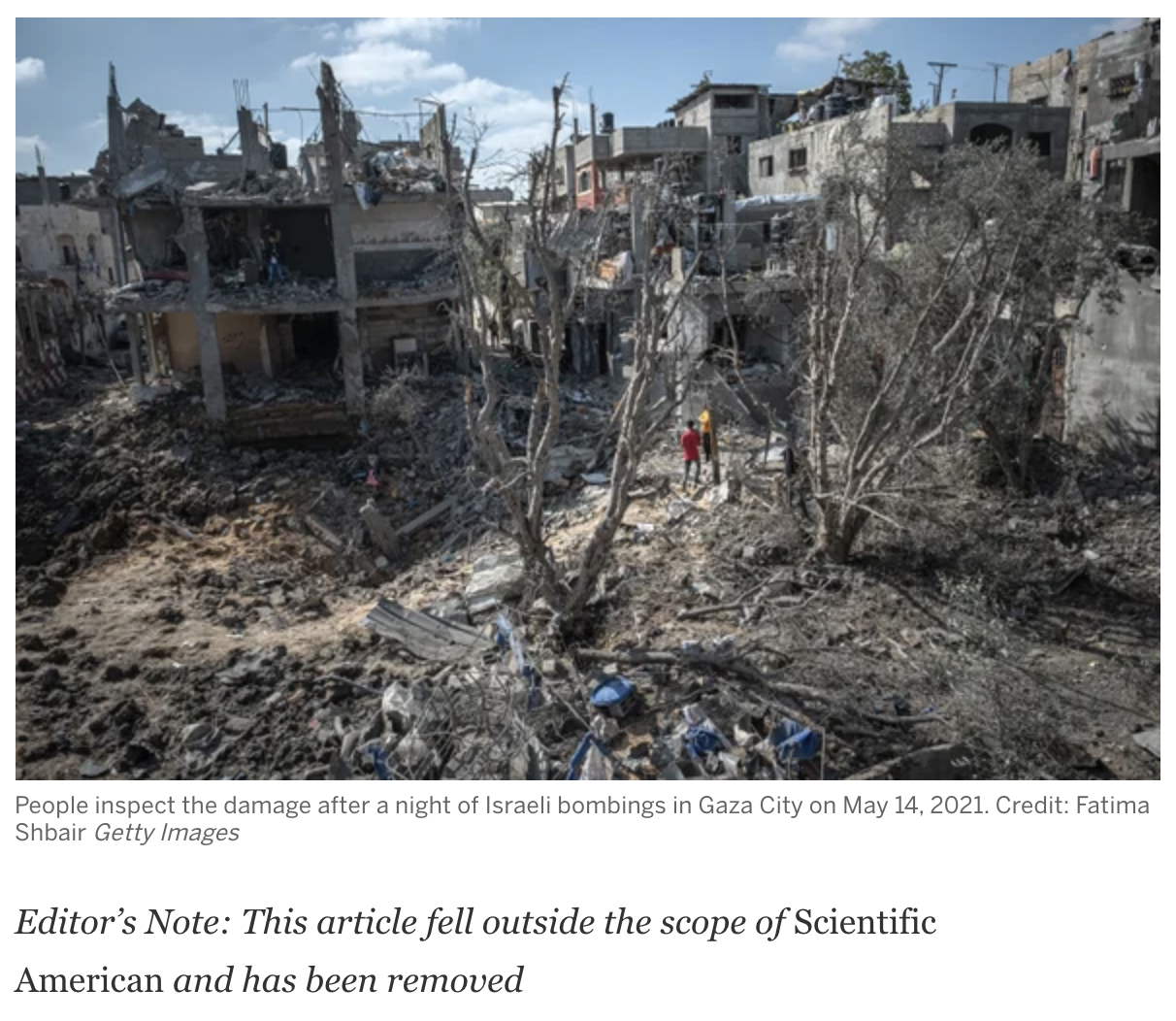 Sadly, the article wasn’t archived, at least not that I know of, but you can get some meaty quotes, and a summary, from the CAMERA post, whose update now notes that the op-ed has been removed. (UPDATE: in the first comment below, reader Mark found an archived version of the op-ed here.)

Well, I’m glad that the editors had the savvy to deep-six the article given that it was full of lies and outside the magazine’s ambit, but perhaps they should have moved it to a place where it could still be read. In general I’m opposed to simply erasing articles without archiving them, as it erases history. One might, however, justify the removal not on the grounds of erasing an invidious piece, but because the piece was full of lies, ergo it shouldn’t be considered decent journalism of any stripe.

My only remaining question is why on earth was this published in the first place?  Yes, we know that many popular-science as well as professional scientific magazines and journals are going woke, but this piece was beyond the pale. And of course its distortions and lies aren’t mentioned as a reason for its removal; only that the article “fell outside the scope of Scientific American.” Still, kudos to editor Laura Helmuth for approving what was done. But it’s too much to hope that other editors or science magazines will follow her lead.

The petition is still up, though, but it was not sponsored by Scientific American and the magazine bears no responsibility for that.