A new article in the Guardian provides a useful summary—though not much new information—about how publishing companies are beginning to refuse to publish books, or are pressured to refuse them, that are written by the Unsavory, with that group generally determined not by the older editors but by younger workers at publishing houses. Click on the screenshot to read: 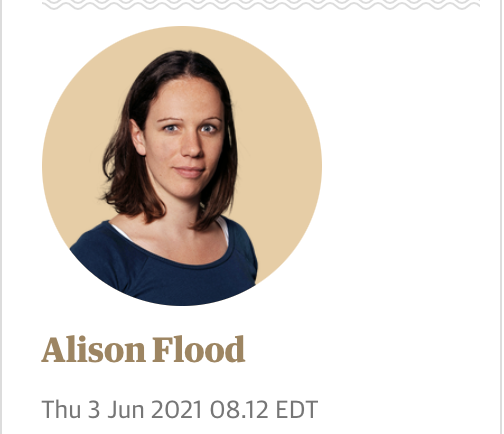 Here are some canceled books, books published over staff objection, or authors who refused to publish with companies that put out books by the Unsavory.  I don’t by any means agree that all these books should have been published, but in general I think that a good publisher will put out a range of topics and views, some of which they don’t agree with. There is no right of “free speech” when it comes to publishing manuscripts, but in general if a book is interesting and will stimulate discussion, and will sell at least reasonably well, it should be published. Many publishers put out books they know won’t recoup the advances as a public service, hoping that the big best sellers will compensate for the losses.

Here are a few quotes from the article that I found intriguing:

First, how the system usually works, as described by an anonymous junior editor:

“Editors have the privilege of predominantly working on books that they have chosen – if they’re doing their job properly, they should feel confident in their acquisition. Assistant editors and editorial assistants don’t often have that privilege,” she says. “There’s a difference between working on a book that you think is a bit rubbish and working on a book that you find repulsive, that makes you angry, or genuinely upsets you. This framing of ‘young people should work on books that they hate’ seems so stupid and reductive to me. Do we just have to wait for all the people making dodgy editorial decisions with no integrity to retire?”

Another junior staffer said they were “slightly bemused by the fact that freedom of speech is so often being equated with the right to a book contract”, adding: “Those in senior positions are forgetting that there is surely a duty of care to their staff that must be considered when asking them to work on books by authors with views that might potentially directly oppose their identity and existence”.

My response would be that, as a junior editor, you always have the right to point out what you consider offensive to your boss. But your boss makes the decision, and if you are so hurt by the “violence” of a proposed book, you should work for another publisher.

And some changes about what is considered offensive:

The truth is, publishers have always walked this tightrope. “Publishers, while knowing that controversy sells, have always exercised the right to reject problematic books,” says Rupert Heath of Dean Street Press, pointing to “innumerable cases of publishers refusing to publish a book, from Schuster with Sheer, to HarperCollins cancelling Chris Patten’s contract over his book’s anti-China line in 1998, at a time when Murdoch was seeking a deal in China. In a recent episode of her podcast, bookcareers.com founder Suzanne Collier recalled working in a junior sales role on David Hamilton’s 1995 controversial photography book, The Age of Innocence. Collier and other staff raised concerns with management over the age of girls included in the book, but the book was still published.

But social media means concerned voices can be louder, and can find strength in numbers through petitions and open letters. “This has always been around, but I believe it’s grown in visibility,” Collier says.

Heath agrees: “The big difference we see now is in publishing staff, in many cases relatively junior staff, trying to dictate company policy, using their influence to block the publication of books already commissioned by their own firms – this is something, as far as I know, without long-term precedent in publishing history.”

The Pence memoir, Heath believes, “will be an important test case – if it is withdrawn, it could open the floodgates for similar action. And in the wake of BLM, #MeToo and other recent, empowering social movements, publishing executives may increasingly feel it behoves them to fall into line with the wishes of their staff.”

Much as I don’t want to read Pence’s memoirs, and won’t, I think they should be published for the historical record. After all, they’re still publishing Mein Kampf, even in Germany, for similar reasons. It would be sad if senior editors started capitulating to their offended or woke staff, for that would lead to the homogenization of literature ( most publishing staff are liberals).

30 thoughts on “On the trend to “depublish” books”