Thanks for the response to my importuning you for photos: I got several sets, one of which is below. But don’t neglect sending in your good photos, as I always have a need for more.

This set comes from reader David Campbell, whose captions are indented. Click on his photos to enlarge them.

A few photos for the hopper.  As usual, a diverse lot.

Great Egret (Ardea alba) photographed at St. Marks National Wildlife Refuge.  The bird is gliding within one half of one wingspan above the water, a condition known as ground effect.  This reduces the drag on the wing because the fixed surface (in this case the water) breaks up the wingtip vortices.  Less drag increases glide efficiency.  If the bird gets close enough to the surface of the water on a calm day, you can actually see the ripples where the vortices meet the water.  This egret did not oblige. 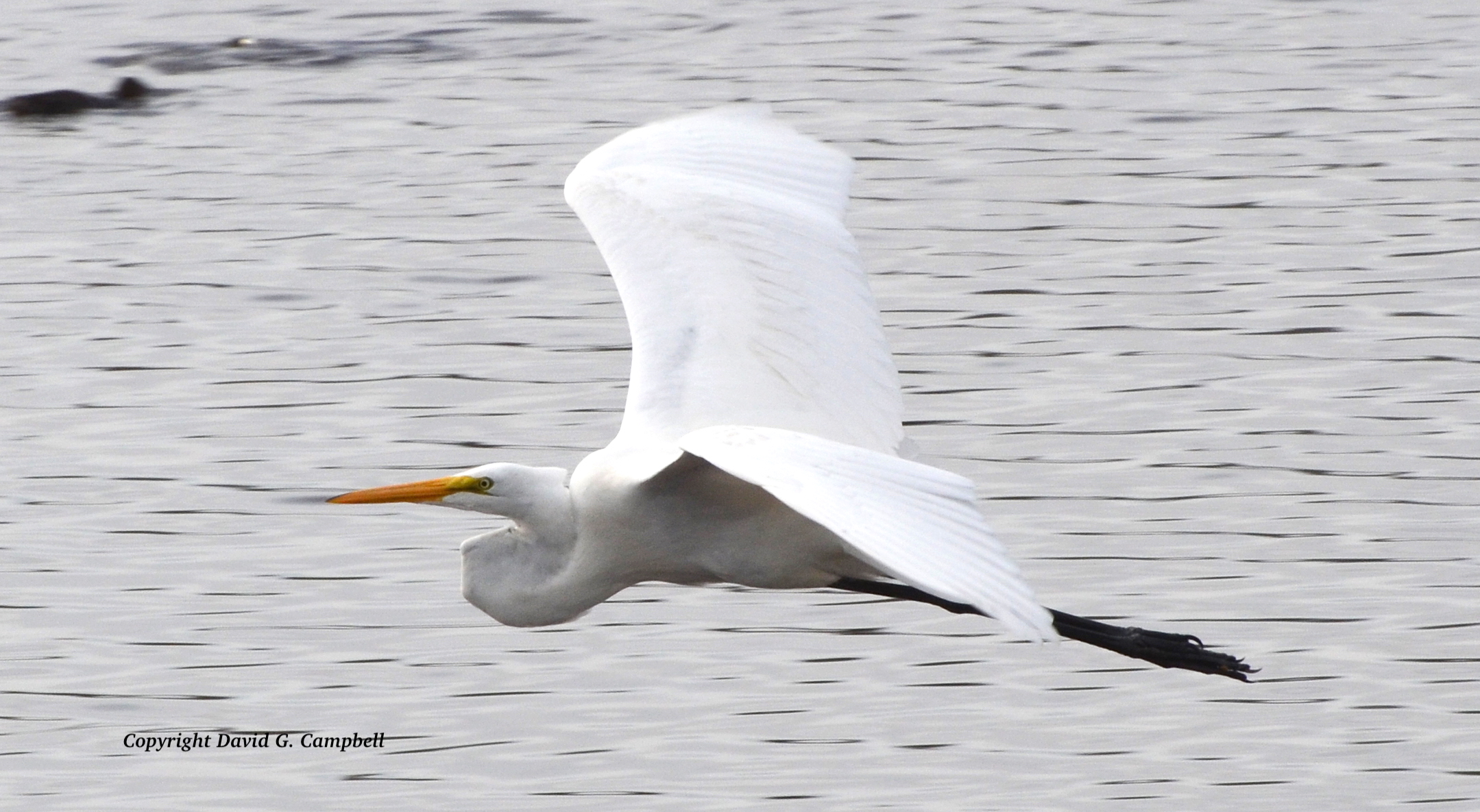 Spotted Sunfish (Lepomis punctatus).  Male coming into breeding color photographed in Silver Glen Springs in the Ocala National Forest.  Spotted Sunfish are among the most common of the Lepomis in the St Johns River drainage and the most approachable.  If a swimmer is  motionless and patient the fish will swim up within inches and hover.  Look closely and you can see the teeth in the lower jaw and a leech attached to the fin rays. 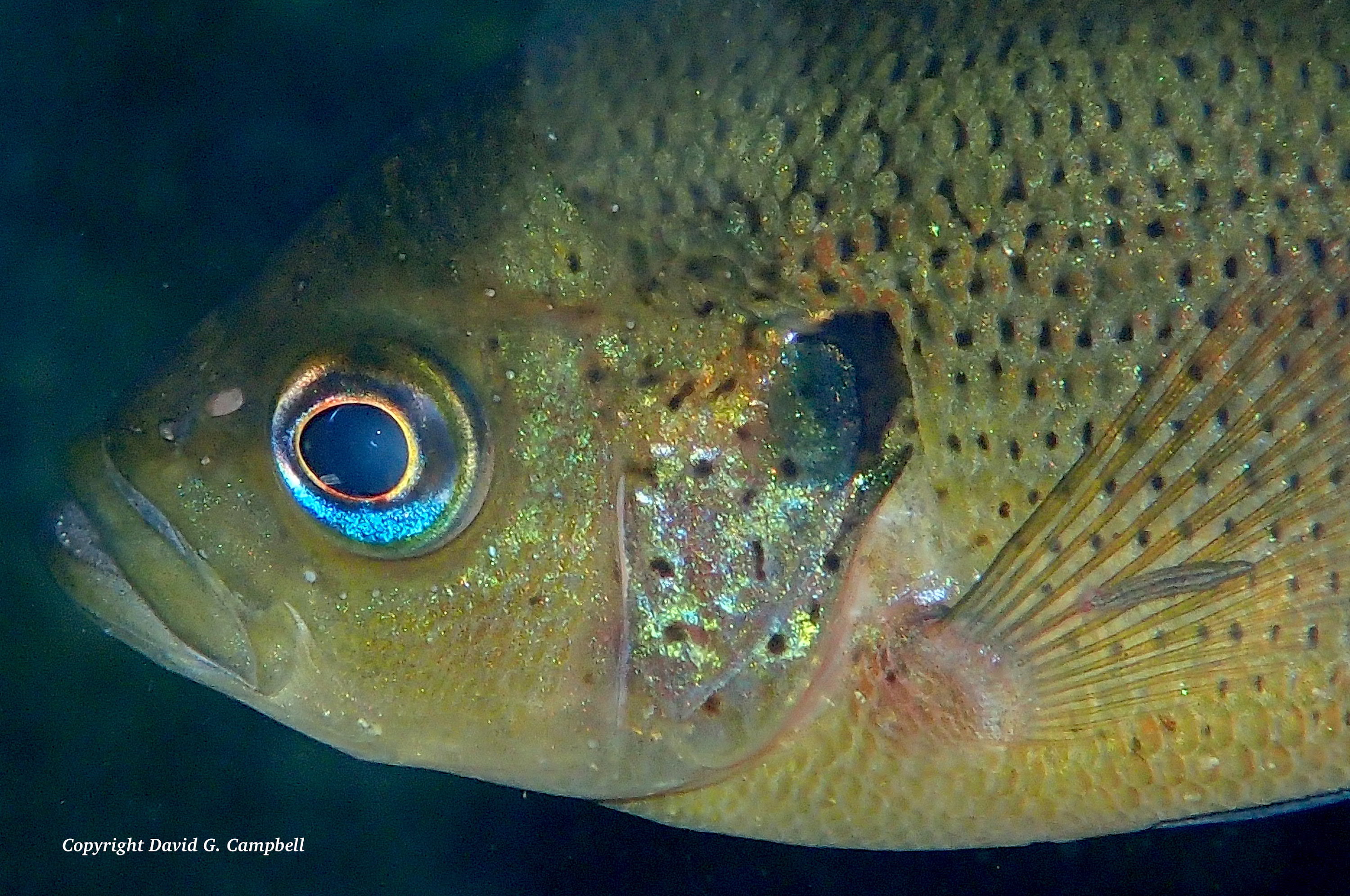 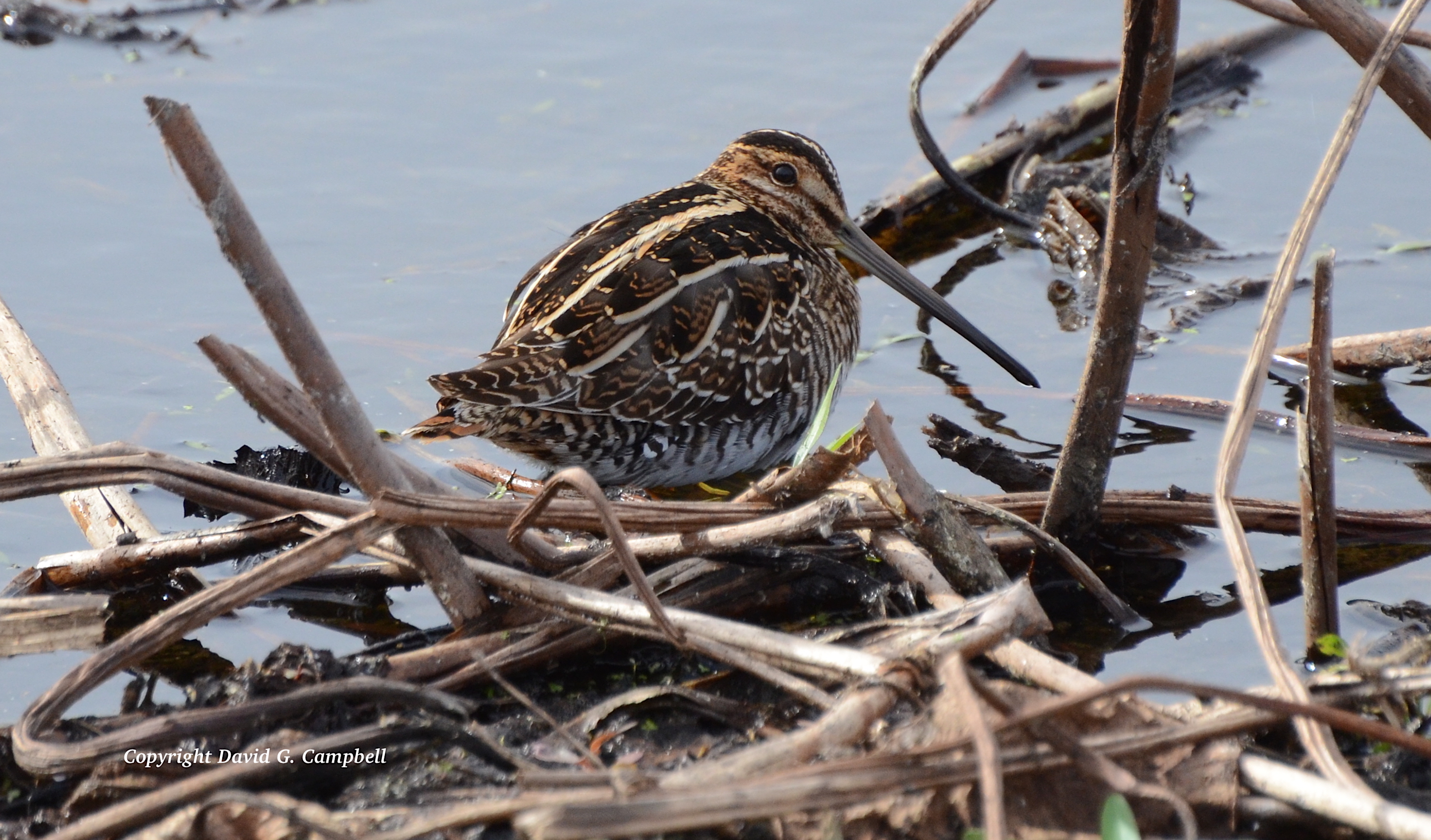 Horned Spanworm (Nematocampa sp.  Probably N. resista.). This larva dropped down from an oak canopy on a silk thread.  The dorsal threads can be extended until straight. 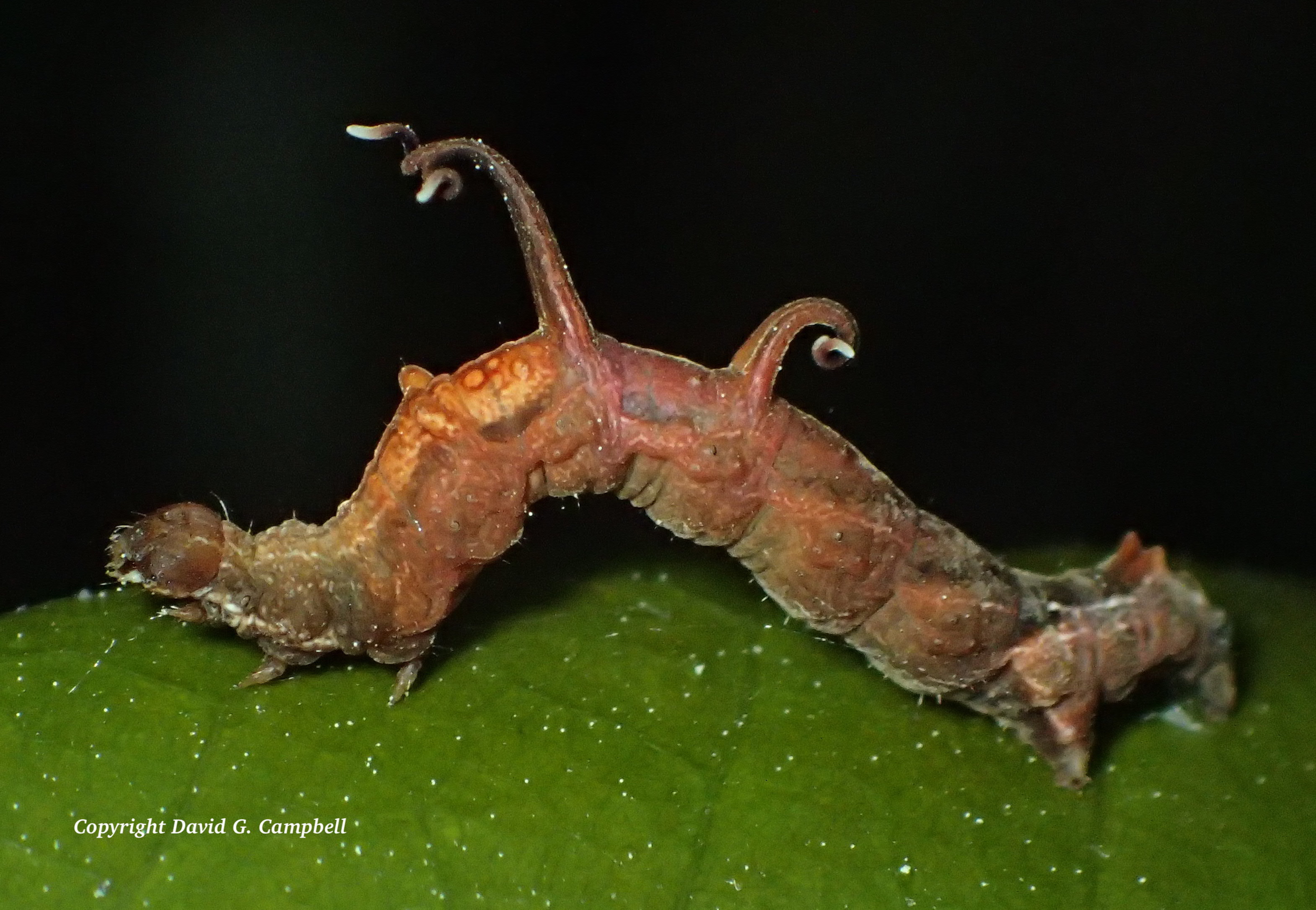 Eastern Garter Snake (Thamnophis sirtalis).  This is a quartet of photos showing how a nonvenomous snake can intimidate perceived threats by changing its appearance to look like a venomous snake.  When grabbed, garter snakes respond by biting and smearing musky feces on the attacker.  The experience is both unpleasant and memorable.  When threatened they try to flee.  When cornered, like many other snakes, they vibrate their tails, inflate the body to look larger and fatter, and flatten the head to make it wider and more triangular while elevating the front third of the body in an S shaped coil.  It is a pretty impressive mimic of a small viper.

This is a close up of the front part of the snake. 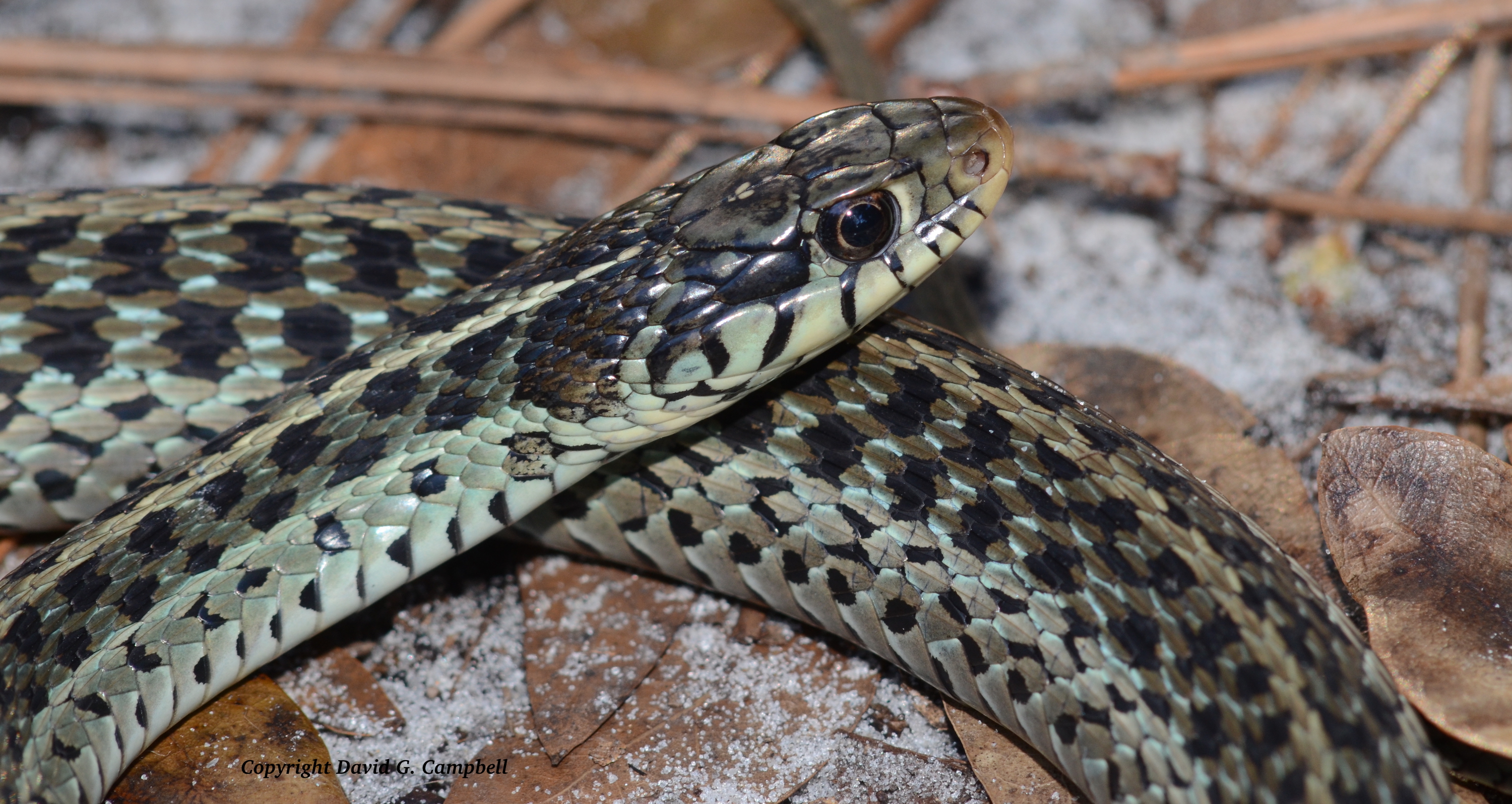 The first photo shows a normal eastern garter snake as it would look minding its own business. 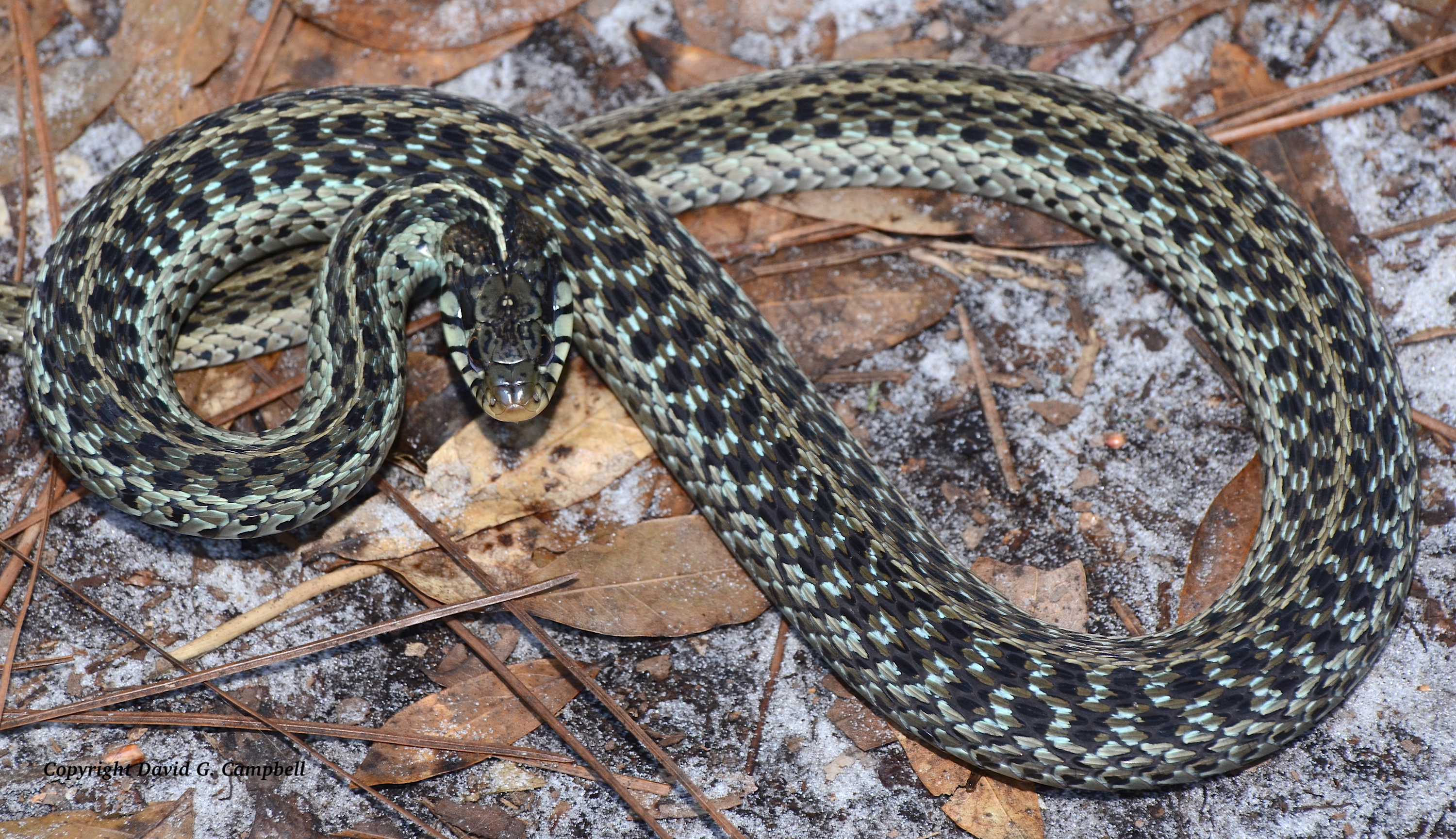 The second shows a snake that is in almost full defensive posture with inflated body and flattened head. 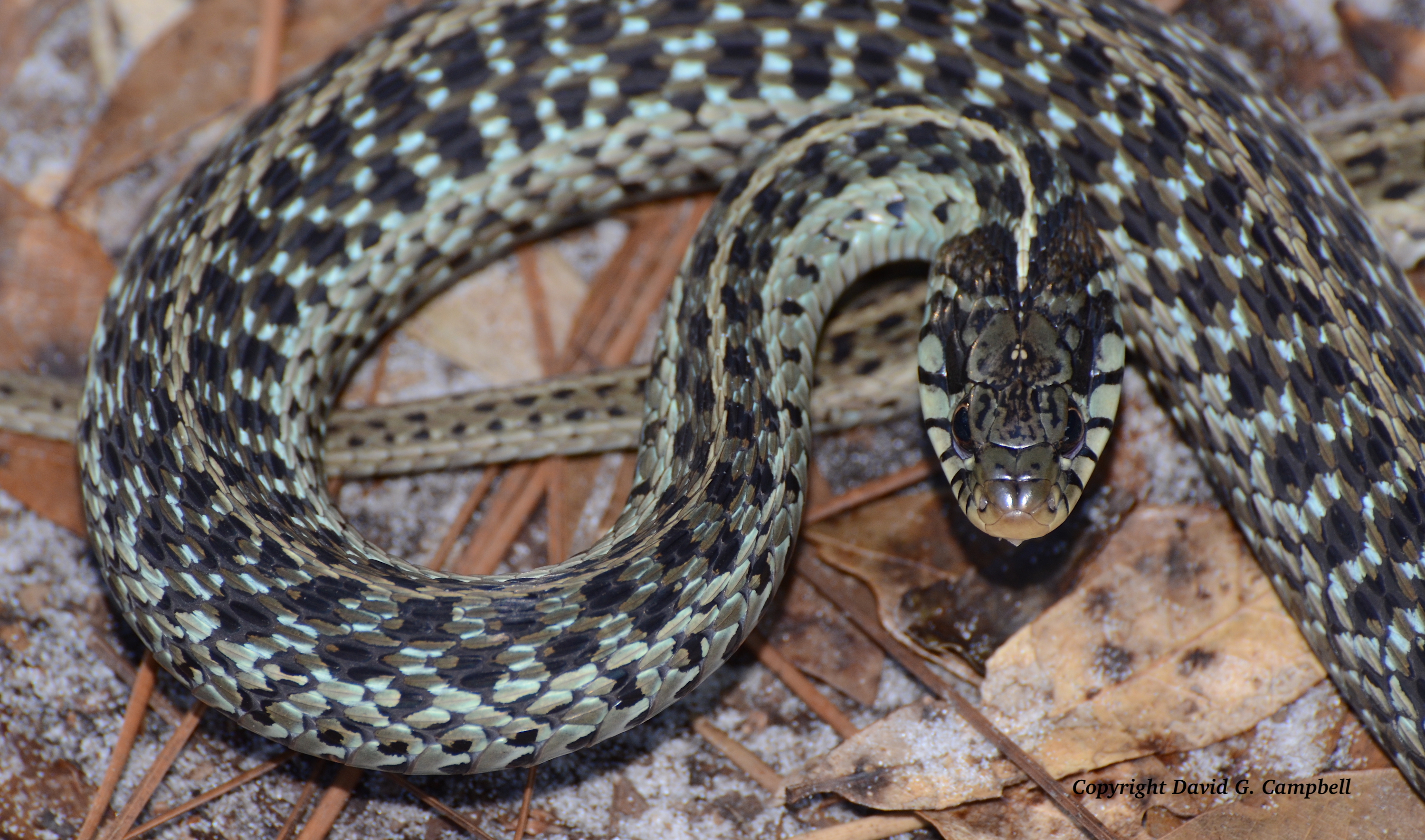 The fourth photo shows a snake in full defensive threat posture with head elevated for a strike. 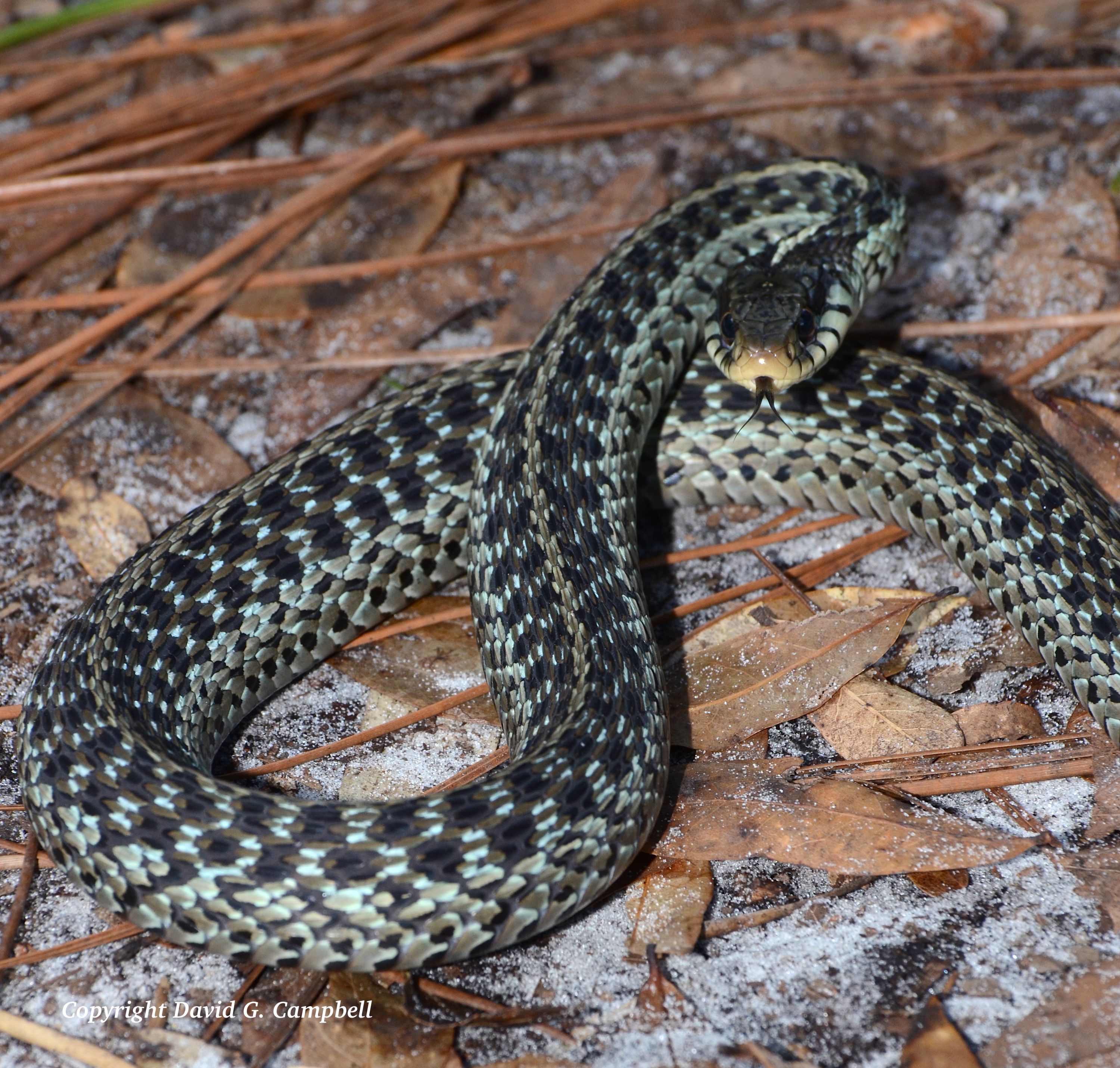 Florida Softshell Turtle (Apalone ferox).  The trash can lid with legs and an attitude.  This is one of the largest freshwater turtles in the United States, with large females having carapace lengths approaching 40 cm long.  They spend most of their time under water except when basking or seeking mates/laying eggs.  They have very long necks and extended nostrils, allowing them to sit on the bottom waiting for food but still reach up to the surface to breathe.  The neck is long enough that the turtle can bite a careless human grabbing the shell behind the middle of both sides.  Turtle rescuers grab (VERY carefully) the front edge and rear edge of the shell to transport softshells. 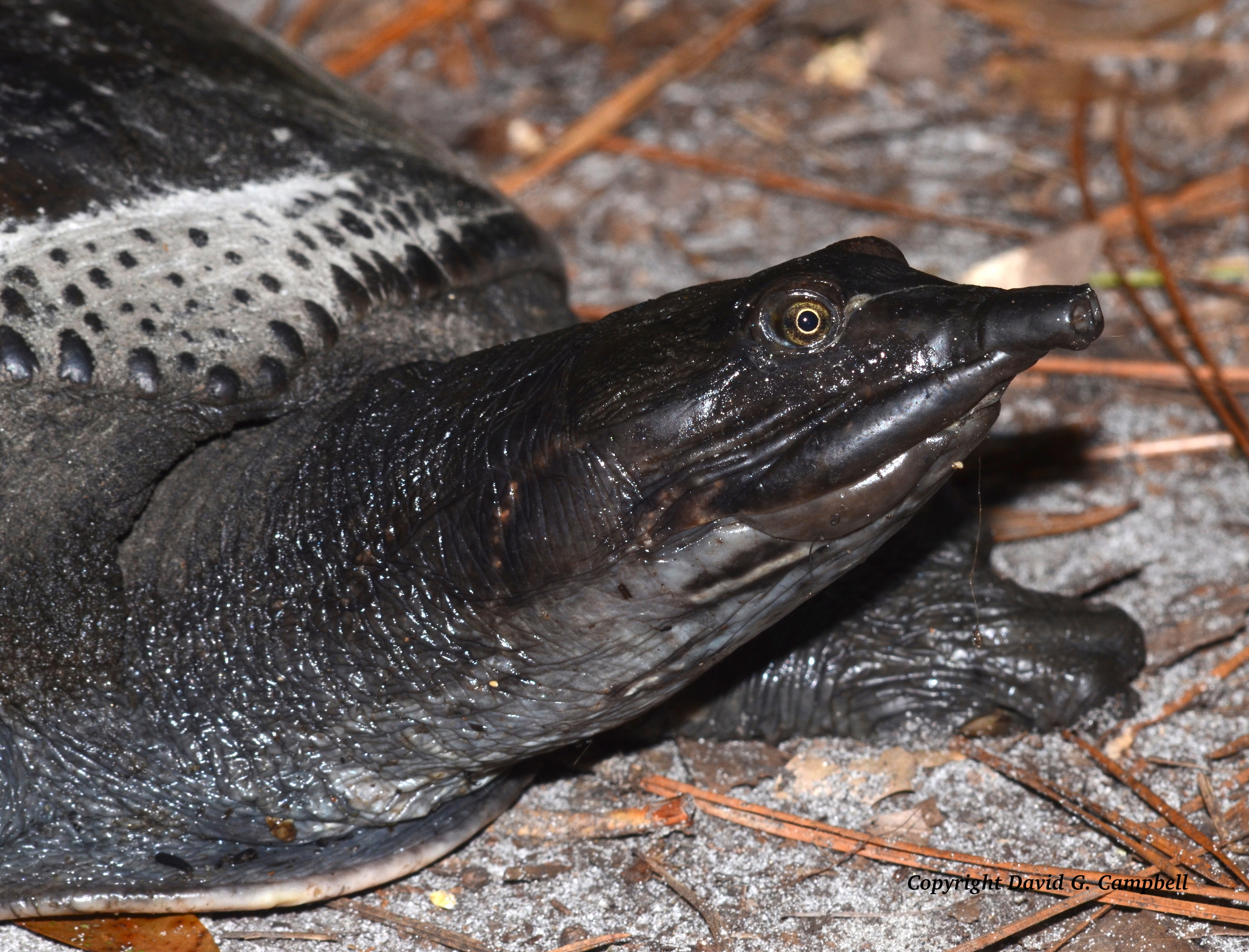 Eastern Coral Snake (Micrurus fulvius).  I found this little beauty crawling next to my house.  Coral snakes are elapids, related to cobras, with short fixed fangs and primarily neurotoxic venom.  We used to see them a lot more frequently, but drought and a large feral cat colony down the road have decimated populations of lizards and snakes that coral snakes feed on.  These are shy snakes that tend to be very nervous.  When threatened many (but not this one) curl the end of the tail into a small ball and wave it around, supposedly mimicking a head, while burying the real head under a coil of snake.  Several species of nonvenomous snakes mimic coral snakes, but their banding patterns are a bit different.  The late Dr. Roger Conant suggested thinking of a traffic light.  Red means stop, yellow means caution (except around here where a yellow light means floor it).  If the danger colors touch, it’s a coral snake.  In North America. 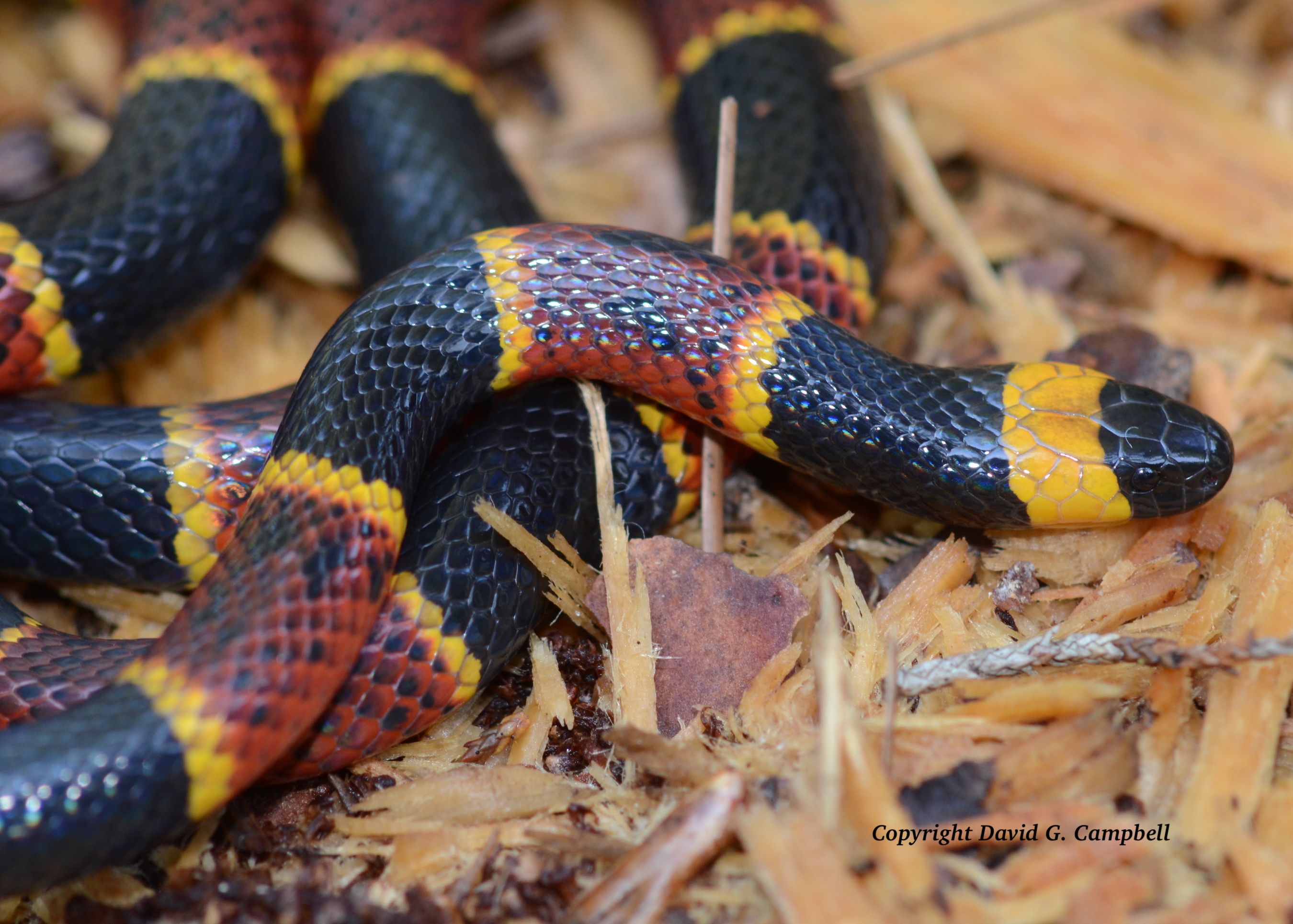 Clouded Leopard (Neofelis nebulosa) This is not “wild” life but the picture shows one of my favorite cats in a beautiful pose.  It was photographed at the Central Florida Zoo in Sanford, Florida. 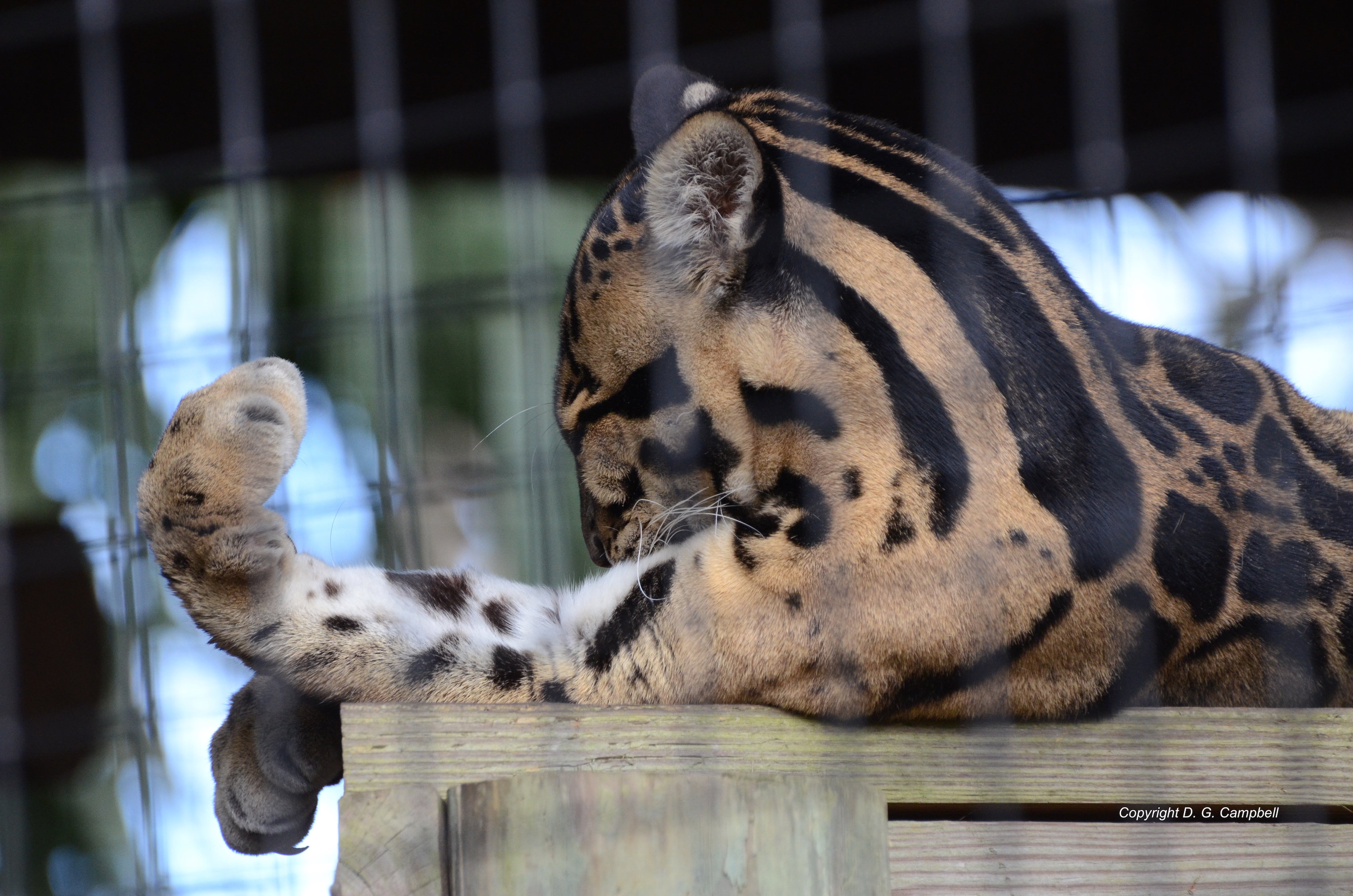