As far as I can determine, New York Times political columnist Thomas Edsall is a classical centrist liberal. Nevertheless, like many of us, he’s worried that wokeness among Democrats, rife in the misnamed “progressive” wing of the Party, could spell disaster in our attempts to court centrist Americans. This is the subject of his weekly column in the Times (click on the screenshot to read): 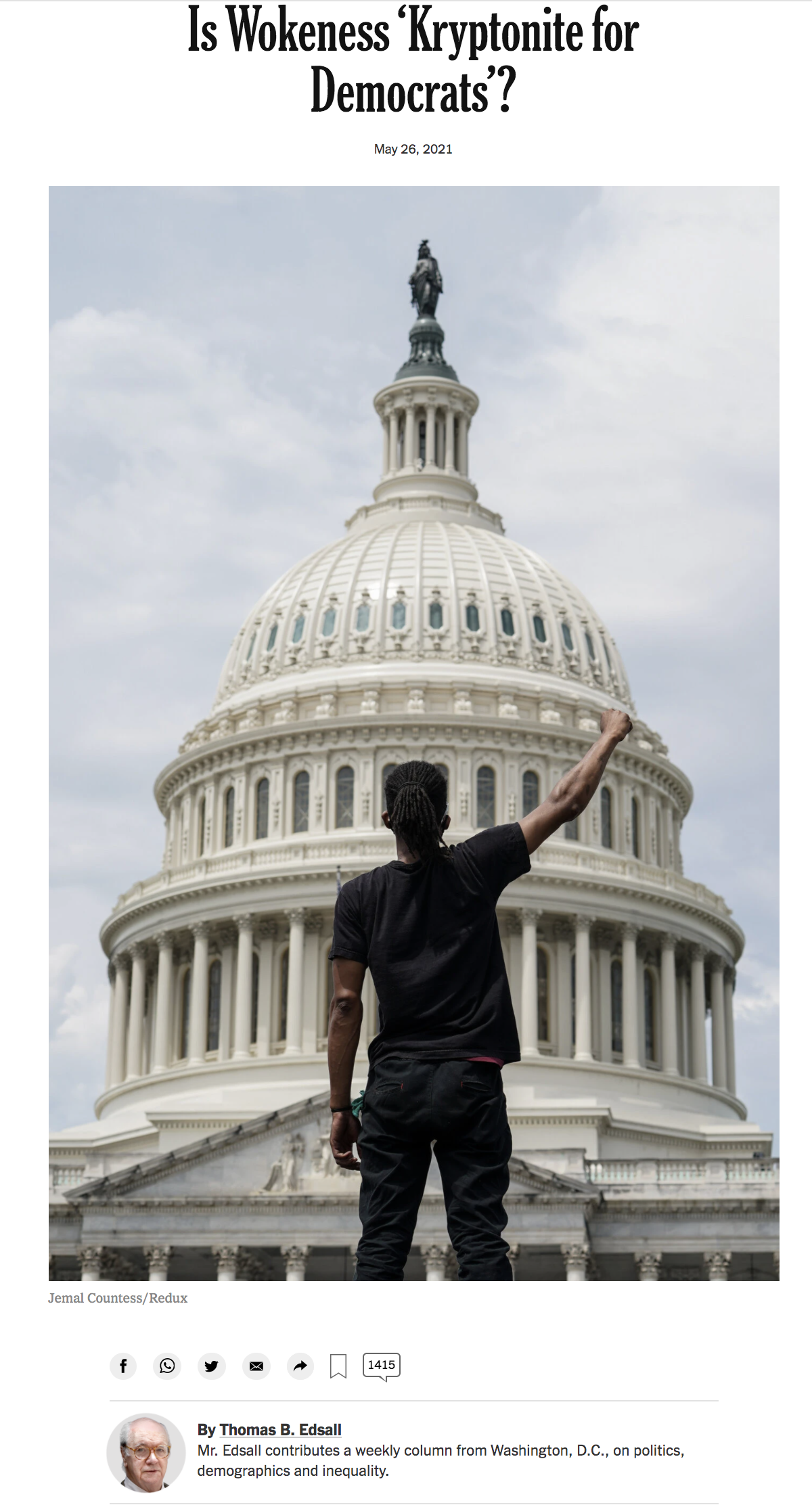 First, some statistics showing where Americans sit on several issues that are “big” for progressives (all quotes are from Edsall unless indicated otherwise):

Now of course some of the “wokeness” is in a good cause. Transgender people need to be not just respected, but given, as far as possible, full equal rights under the law. Police violence, racist or not, needs a closer inspection. And more people than ever are living in fear that what they say publicly could lead to their eternal damnation (pushback is of course useful and legal, but things have gone way too far).

Before I show some of the statements collected by Edsall to support his thesis, here’s one in support of wokeness that deserves consideration:

Elizabeth Rose, a law student, argued, for example, in “In Defense of Cancel Culture” last year that “for all the condemnations on cancel culture as an un-American speech suppressing monster, I would argue that cancel culture is incredibly American.”

is essentially a boycott. It’s refusing to participate or support those that promote racist, homophobic, sexist, transphobic, or otherwise ignorant behavior. Protest is at the heart of this country and it shouldn’t be limited in the name of making already powerful people feel safer to spew ideas that are not tolerable in today’s society. Because exposure by millions is so easy now with social media, celebrities, rich, powerful, connected, and beautiful, can no longer get away with disrespecting human dignity. They are not being held to a higher standard for being a public figure, they are being held to the bare minimum.

The problem is not that one should not push back against statements you consider injurious or bigoted. The problem is twofold. First, the pushback is not just counter-speech, but an attempt to ruin the lives of those who say things you don’t like. It is, in other words, a lack of empathy and civility—the assumption.  More important, much of the wokeness that irritates people like me—and probably many centrists—is that it is performative: it doesn’t aim to improve social problems but, apparently, to highlight the virtue of the critic. This includes things like the demonstrations against “Kimono Wednesdays” at Boston’s Museum of Fine Arts, the attack on a professor who used a Japanese phrase that sounded like the “n word” but was a common Chinese filler sound, the overreaction to supposed racial slights that weren’t really racial, like the one at Smith College, the demonization of “whiteness” that’s an essential part of much anti-racist training (training that’s proved to be largely ineffective), and (a non-performative example) the dismantling of standardized testing on the grounds that it reveals gaps between racial groups. If these things strike me as overreactions, and often risible, then they will strike people more centrist than I as even more ridiculous.

Note, too, that the Right engages in much of this bad behavior, as Nadine Strossen points out:

Nadine Strossen, professor emerita at New York Law School and former president of the American Civil Liberties Union, wrote by email that she considers herself

a “bleeding-heart liberal” but even more important to me are the classic liberal values that are under siege from all sectors of the political spectrum, left to right, including: freedom of speech, thought and association; academic freedom; due process; and personal privacy.

As I always emphasize, the behavior of the Right is nearly always way more odious than that of the Left, but my interest is keeping Democrats in power, and to do that, as Edsall’s quotes attest, we need to dial down the more ludicrous forms of wokeness. Do you want Republicans to recapture the House and Senate in 2022?

In an article in March, “Why Attacking ‘Cancel Culture’ And ‘Woke’ People Is Becoming the G.O.P.’s New Political Strategy,” Perry Bacon Jr., formerly a senior writer at FiveThirtyEight and now a Washington Post columnist, described the ways that policies the Democratic left argued for provided political opportunities to the Republican Party:

First and perhaps most important, focusing on cancel culture and woke people is a fairly easy strategy for the G.O.P. to execute, because in many ways it’s just a repackaging of the party’s long-standing backlash approach. For decades, Republicans have used somewhat vague terms (“dog whistles”) to tap into and foment resentment against traditionally marginalized groups like Black Americans who are pushing for more rights and freedoms. This resentment is then used to woo voters (mostly white) wary of cultural, demographic and racial change.

Among the reasons Republicans will continue to adopt an “anti-woke posture,” Bacon writes, is that it

gives conservative activists and Republican officials a way to excuse extreme behavior in the past and potentially rationalize such behavior in the future. Republicans are trying to recast the removal of Trump’s accounts from Facebook and Twitter as a narrative of liberal tech companies silencing a prominent conservative, instead of those platforms punishing Trump for using them to “incite violence and encourage overturning the election results.”

or try to overturn election results in future elections, as seems entirely possible, the party is likely to justify that behavior in part by suggesting the Democrats are just too extreme and woke to be allowed to control the government. The argument would be that Democrats would eliminate police departments and allow crime to surge if they have more power, so they must be stopped at all costs. Polls suggest a huge bloc of G.O.P. voters is already open to such apocalyptic rhetoric.

We’ve already discussed James Carville’s outspoken criticism of Wokeness in an interview at The Atlantic, but here are three other critics. First, Jon Haidt:

Jonathan Haidt, a social psychologist at N.Y.U., argued in an email that the policies the Democratic Party’s left wing is pushing are an anchor weighing down the party’s prospects:

Wokeness is kryptonite for the Democrats. Most people hate it, other than the progressive activists. If you just look at Americans’ policy preferences, Dems should be winning big majorities. But we have strong negative partisanship, and when people are faced with a party that seems to want to defund the police and rename schools, rather than open them, all while crime is rising and kids’ welfare is falling, the left flank of the party is just so easy for Republicans to run against.

And then Jonathan Rauch discusses why those opposed to more extreme wokeness don’t criticize it publicly. I think his reasons are quite good:

I asked Jonathan Rauch, a senior fellow at Brookings and the author of the new book “The Constitution of Knowledge: A Defense of Truth,” about the lack of pushback, and he suggested a series of factors. [JAC: I’ve put in bold the ones I consider most important.]

And Randall Kennedy (an African American):

Randall Kennedy, a law professor at Harvard and the author of the forthcoming book “Say It Loud! On Race, Law, History and Culture,” cited in an email a similar set “of reasons for the deficient response to threats against freedom of thought, expression and learning emanating from the left.”

“Woke” folk making wrongful demands march under the banner of “EQUALITY” which is a powerful and attractive emblem, especially in this George Floyd/Covid-19 moment when the scandalous inequities of our society are so heartbreakingly evident. On the campuses, many of the most vocal woke folk are students whom teachers and administrators want to mollify, comfort and impress. Many teachers and administrators seek desperately to be liked by students.

At the same time, Kennedy continued, many of the people demanding the diminution of what he sees as essential freedoms have learned how to package their insistence in effective ways. They have learned, Kennedy wrote, to deploy skillfully the language of “hurt” — as in “I don’t care what the speaker’s intentions were, what the speaker said has hurt my feelings and ought therefore to be prohibited.”

Because of this, Kennedy argued,

Authorities, particularly those at educational institutions, need to become much more skeptical and tough-minded when encountering the language of “hurt.” Otherwise, they will continue to offer incentives to those who deploy the specters of bigotry, privilege and trauma to further diminish vital academic, intellectual and aesthetic freedoms.

I would particularly emphasize the recurrent claims of “harm” or “danger”, claims that I often reject completely. Few of these clams involve actual harm; instead, nearly all involve having to encounter ideas you don’t like. And that is part of not just college education, but growing up in general. To call it “harm,” “danger,” or “injury” is ludicrous.

What’s the cure? Well, it’s to appeal to those who are open minded, and that excludes most Republicans. One of the few sensible courses of action I’ve seen is suggested by Diane Halpern, a psychology professor at Claremont McKenna College and former president of the American Psychological Association. (It would require a psychologist rather than a politician to make sensible suggestions, wouldn’t it?)

[Halpern] wrote in an email:

All social movements are a series of actions and reactions. For example, we can all agree that charges of sexual assault should be fair to all parties involved. But how does “fairness” get operationalized. The swing from policies that seem to favor the person being accused, then the reverse, then back again, and so on is mirrored in many other topics where people disagree. Action in one direction is followed by reaction in the other direction.

is to get people to find what they can agree upon and continue from that point. For example, most people will agree that they want humane treatment of migrants who are fleeing almost certain death in their home country, and we can agree that the United States cannot admit everyone who wants to live here. If conversations began with a shared set of goals, there will still be strong disagreements, but the tone will reduce some of the hostility both sides feel toward each other.

But, as Edsall notes, given the huge ideological gap between Republicans and Democrats, even this tactic may be futile. My suggestion would be the same one I give atheists who are sick of theocracy in America but don’t know what to do: “Speak up! There are many who feel like you, but are afraid to open their mouths. The more of us who express our feelings, regardless of how we’re demonized, the more the silent majority will stop being silent.”

This is one reason, I think, that religiosity has decreased so strongly in the last two decades, for that’s when people like Richard Dawkins, Sam Harris, Dan Dennett, and Christopher Hitchens started writing anti-theist books, empowering others to take up the cause. Now we need a similar spate of anti-Woke books, and by those on the Left. John McWhorter’s will be one of the first, though there are others by more conservative writers like Douglas Murray. Books like that one have good stuff in them, but are ignored by the Left simply because of the authors’ political leanings.