Various factors, including overwork, malaise, and my forgetfulness about bringing my camera to the pond; these have all stemmed the flow of duck pictures, but I’ll try to bring you up to date today. Things are going tolerably well at the pond but we have had some drama and difficulties.

Here is Dorothy with her nine babies. Remember, she had ten, but for reasons unknown to us she expelled one from her brood. That lone duck, known as “The Peepster” for his erstwhile peeping for mom, is shunned by all other ducks. But we take special care of him and he is growing well: in fact, he’s more advanced in development than are the other ducklings. You can see below that Dorothy’s kids are starting to grow their adult plumage, with feathers on their tails and on their tiny, stubby wings. 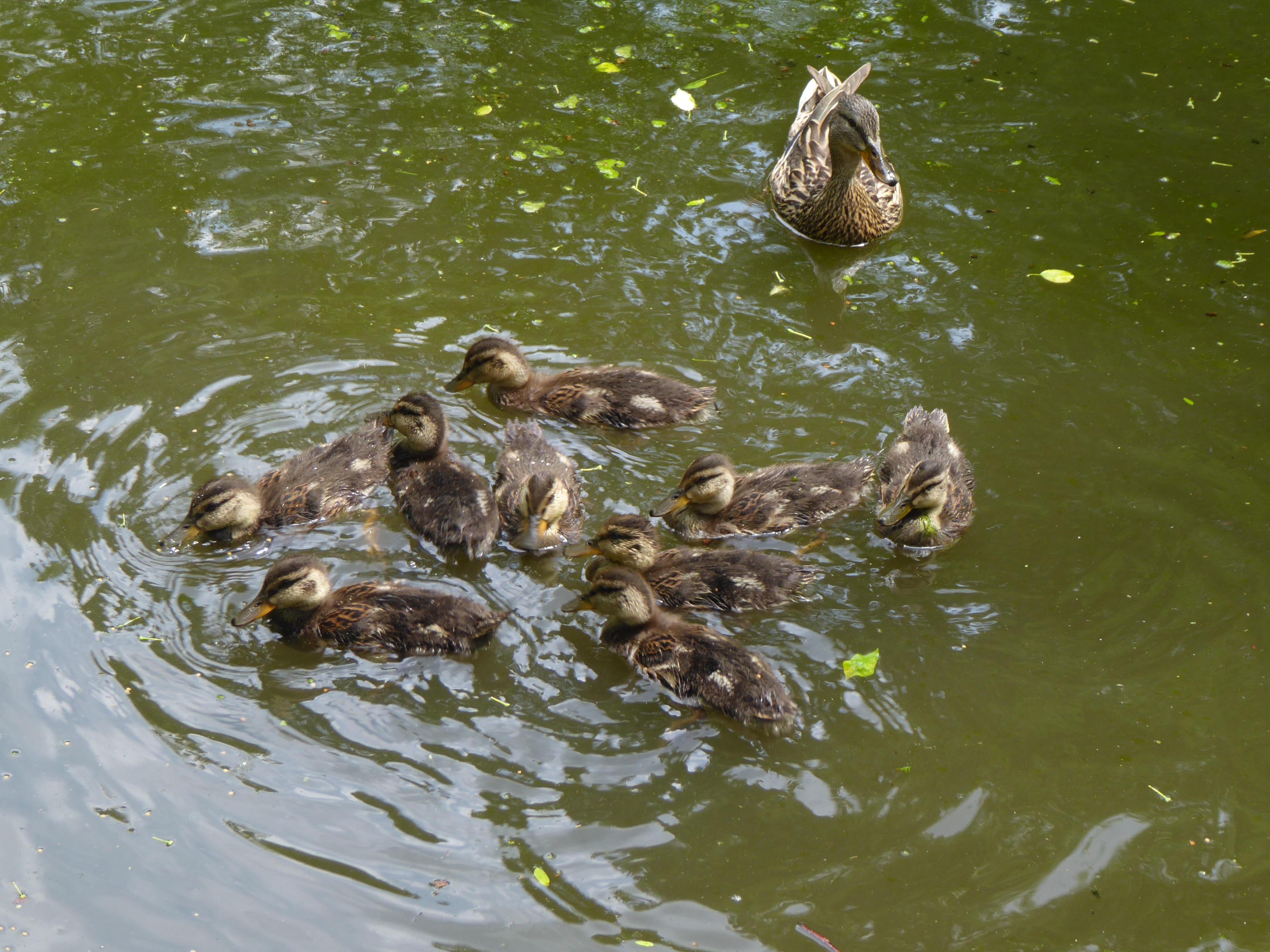 Because of one duckling murder, two unknown deaths, and two ducklings I got rehabbed at a wildlife sanctuary, Honey is down to four ducklings. Here’s her remaining brood. She tries to be with them, but a nasty drake flies in several times a day and chases her away.

The result is that her babies are without a mother most of the time. The upside is that they know each other and remain together, sleeping in a pile and eating together. I am sure that they, like the Peepster, will grow well and fledge. They are doing well, but feeding two broods and a singleton is not an easy task!  Here’s a rare moment of Honey with her brood. 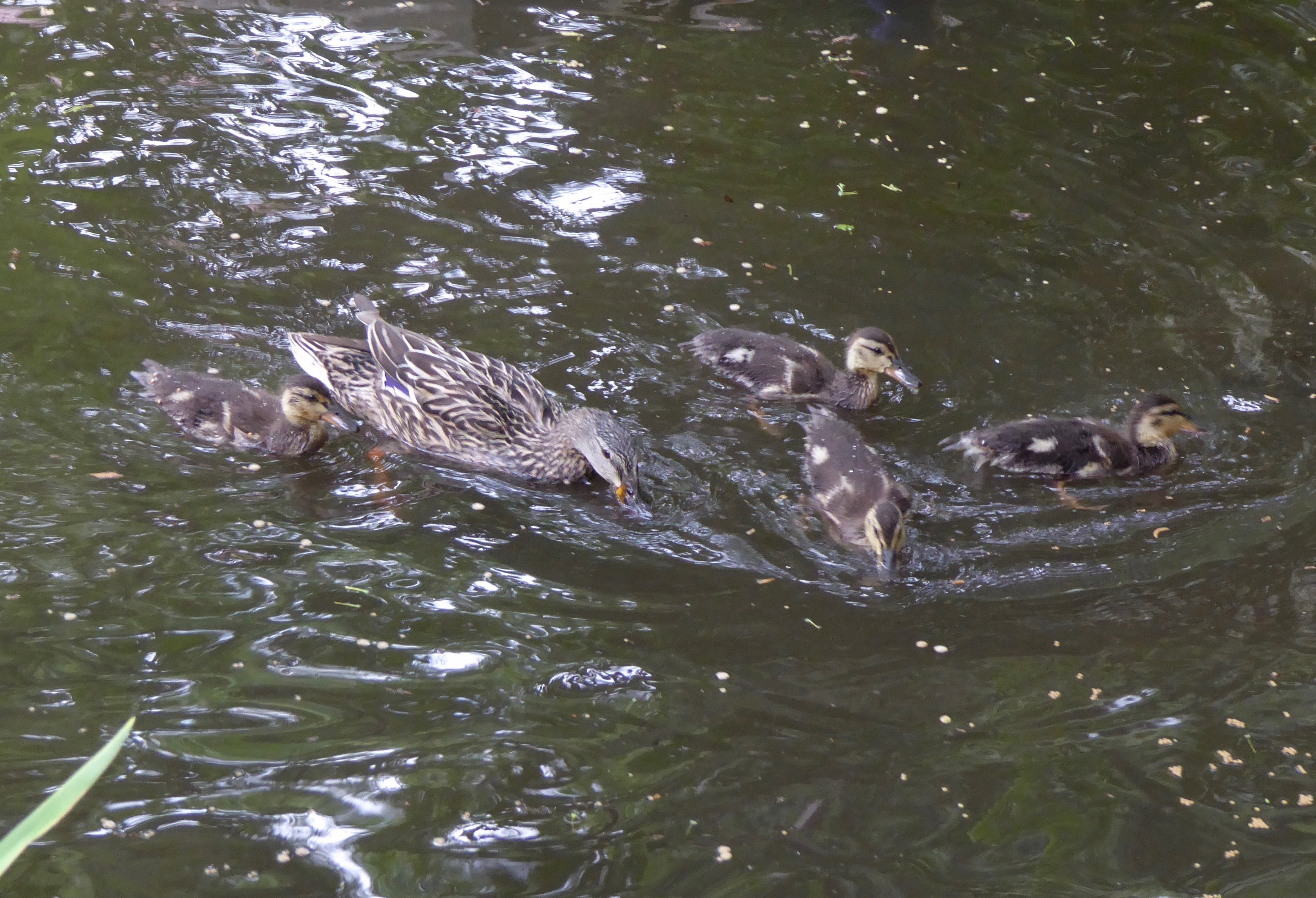 And here’s the sad, lonely Peepster. You can see that he’s entered the scruffy teenage phase, losing his down and getting feathers. But he’s also in excellent shape, though I do with I could find him a friend. 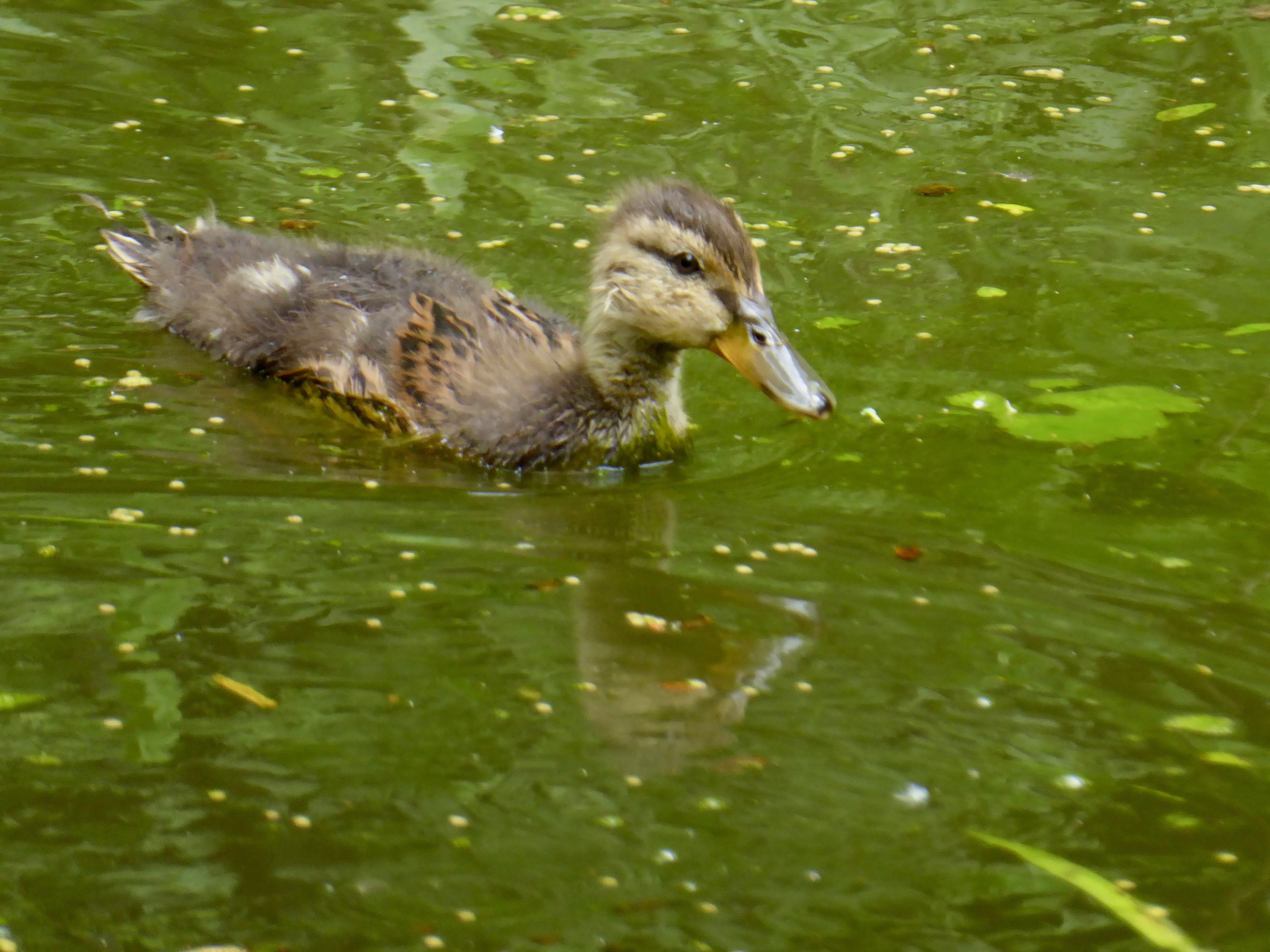 Another view of the Peepster by the pond ruler. At this point the pond is 2.2 feet deep (for some reason they measure feet in tenths rather than inches). 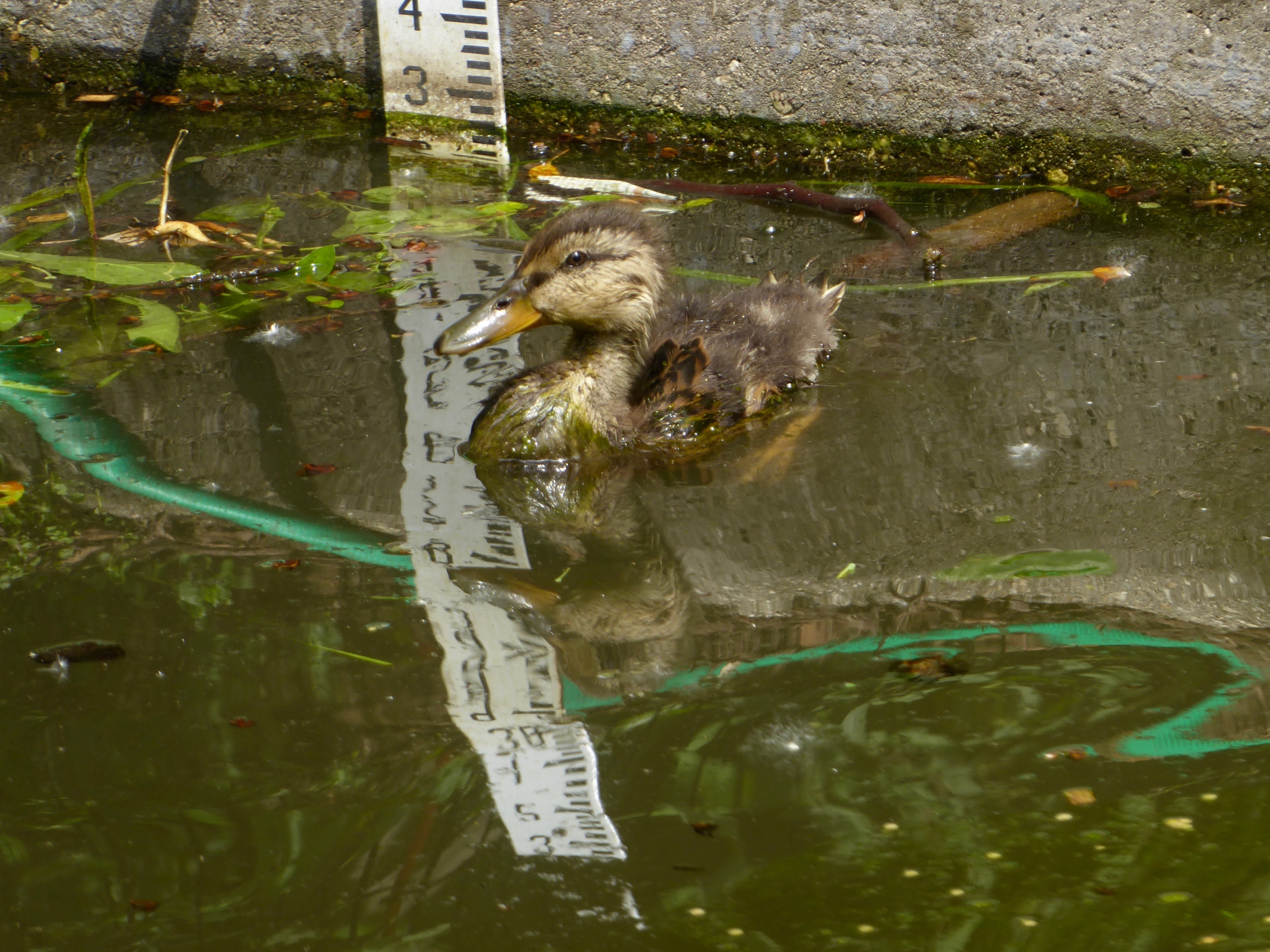 The Peepster wants to hang with Honey’s four, but they don’t like him much, so I often find him near them. They chase him away. Trying to feed them all when they’re like this is, well, trying. But I always succeed! 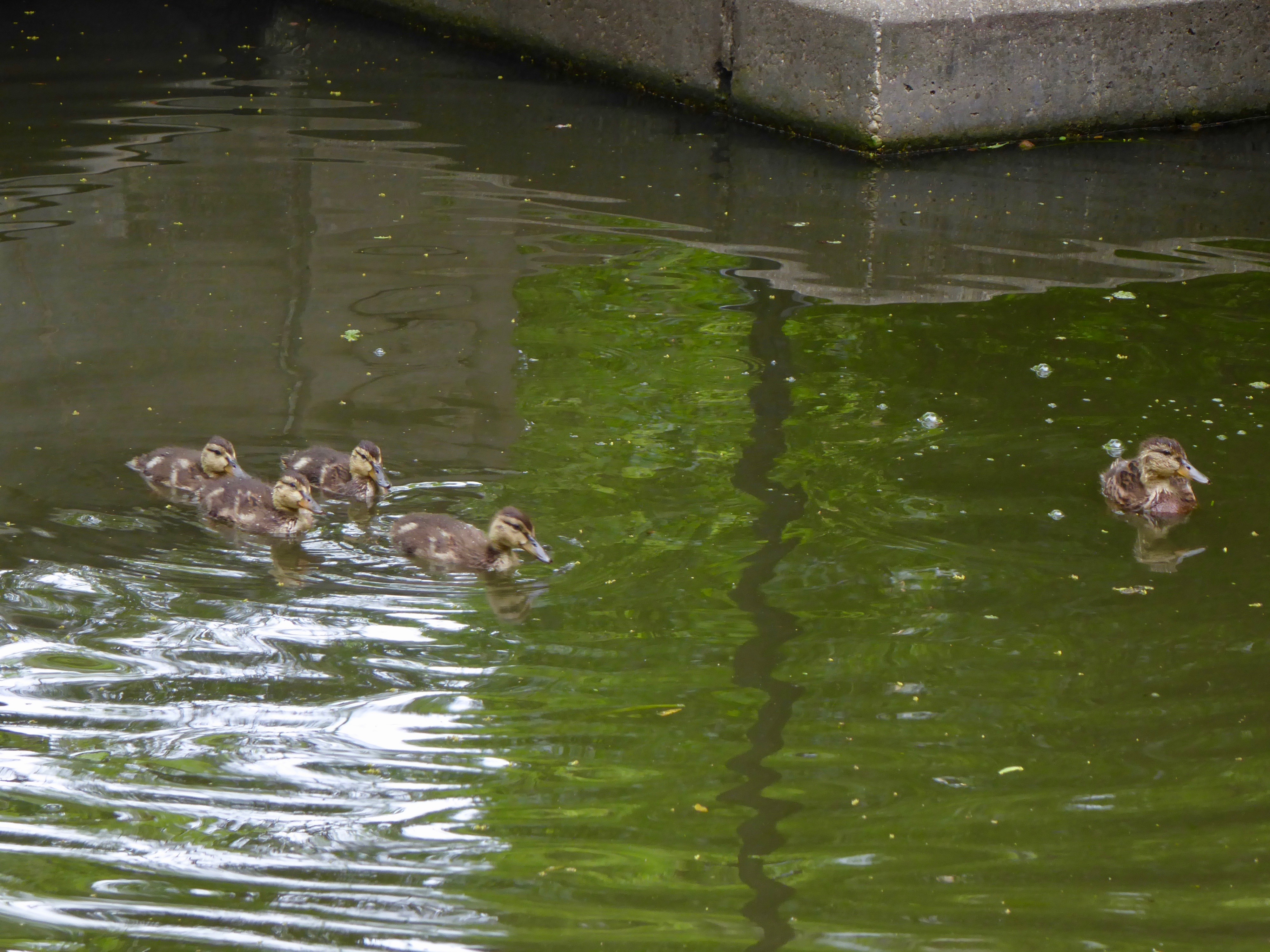 Here’s a video of Dorothy’s babies taken two days after they jumped down to the pond. You can see how eager they are to be with her! And see how fast they can swim! All videos by Jean Greenberg.

And a video of Dorothy’s brood from three days ago, foraging on the bank. How they’ve grown. I like the bit where one duckling flaps its tiny wings:

Dorothy on “duck plaza” napping with her brood: 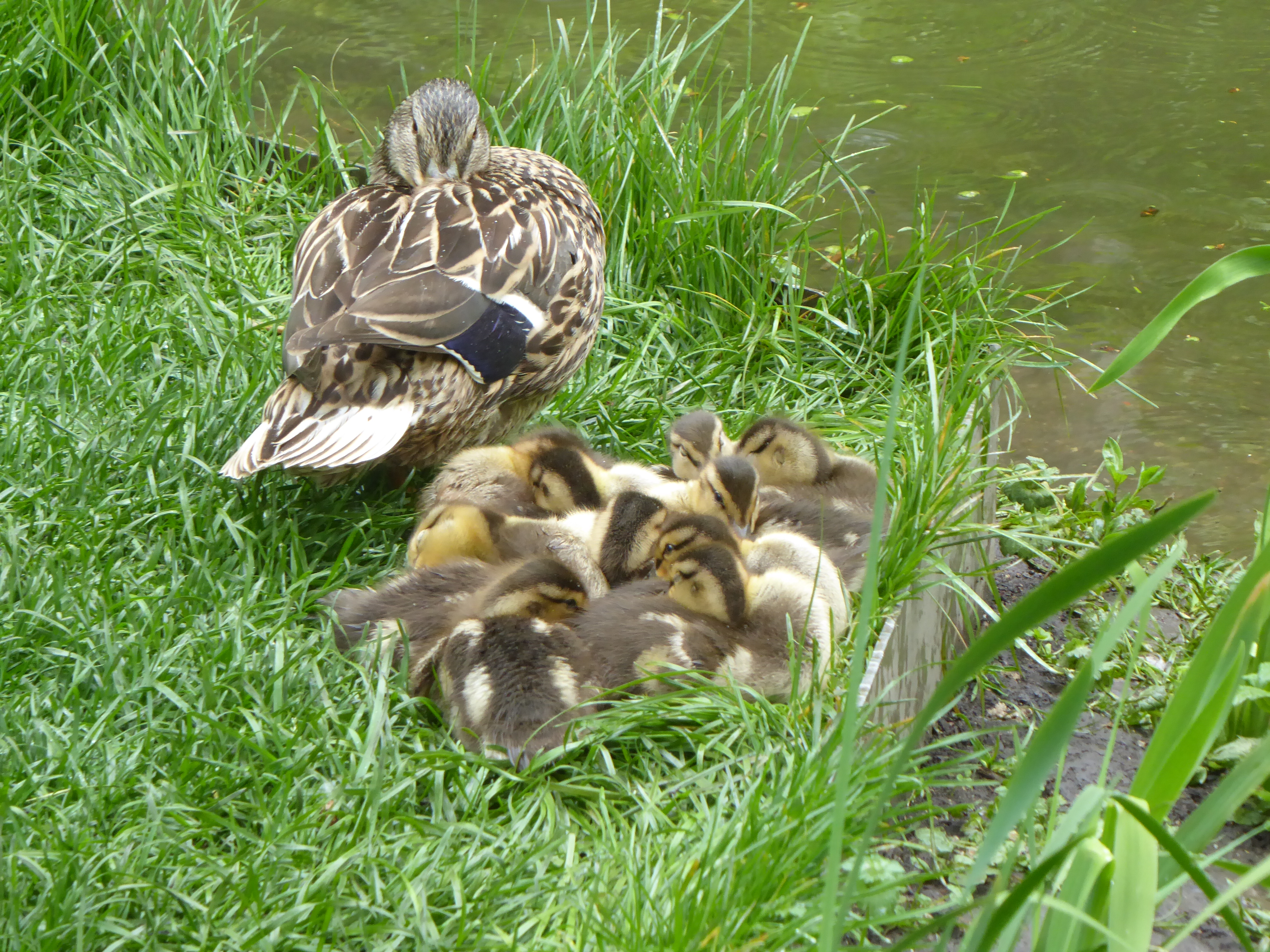 Rarely, both hens would tolerate each other and their respective broods on the bank. Dorothy’s brood is in the foreground. The fence is essential to keep people from disturbing the babies, who are easily spooked. 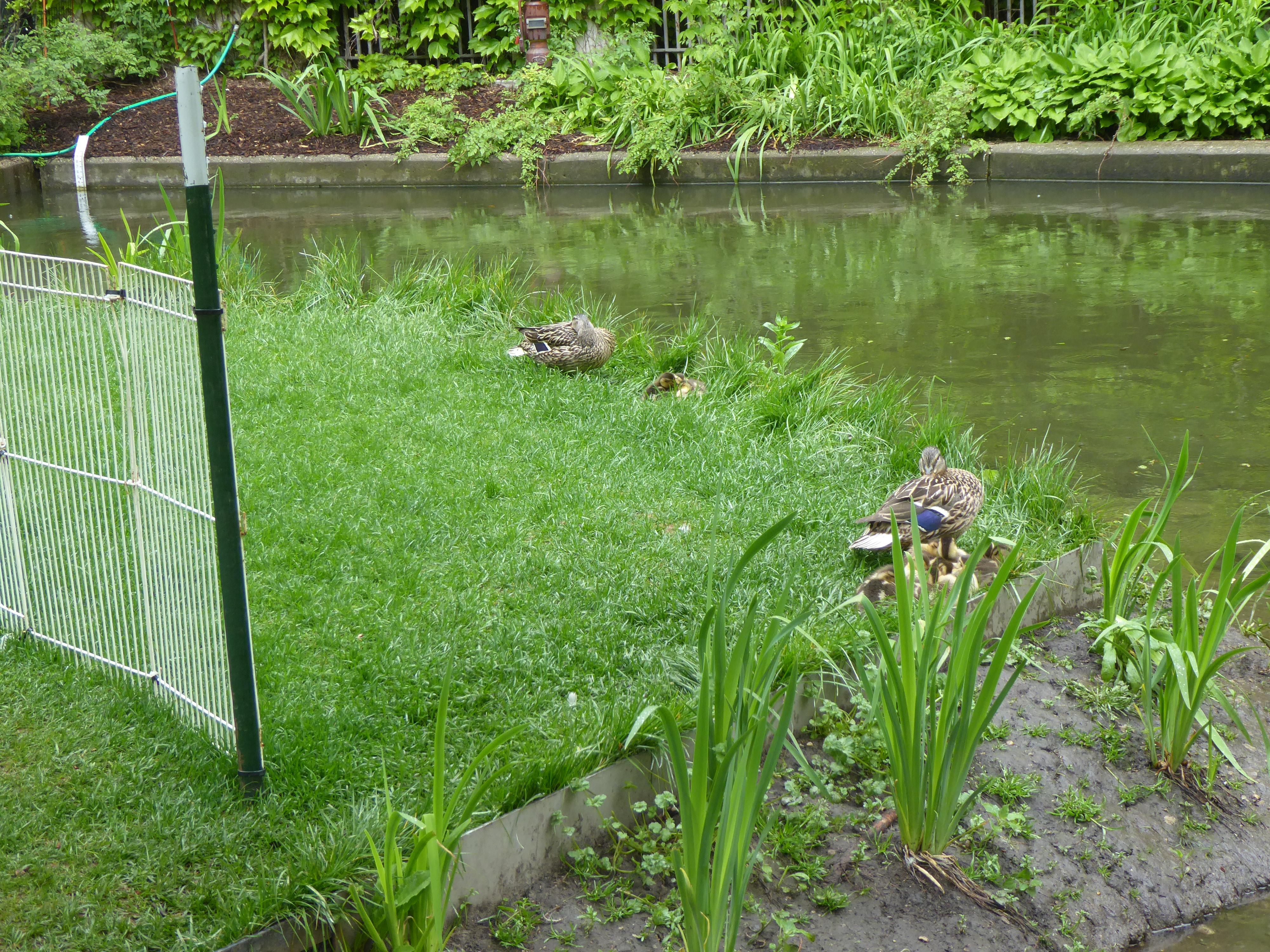 Here are Honey’s brood practicing their diving skills by the duck ramp, which was put up to allow the ducks to march out of the pond. They do use it, but sometimes, as in this video, it’s occluded by basking turtles.

Part of my pleasure as Duckmeister is to lecture to and answer questions about Botany Pond and its ducks from children of Chicago’s famous Laboratory School, which teaches kids from nursery school through 12th grade. (The school, affiliated with the University of Chicago, was founded by John Dewey in 1896.)

We usually get younger classes visiting the pond. Here I am yesterday talking to a class of 5- and 6-year olds. Notice how well behaved they are!  They love to watch and draw the ducks, and I love to tell them about the ducks.

The usual procedure is a short talk about ducks by me, followed by the children helping me feed them (sometimes feeding is difficult when the ducks are skittish). Then there’s my favorite part, the Q&A session. These are smart and inquisitive children, and they have many questions, including some that I can’t answer. One I had yesterday was: “How do they know how to fly?” My response, which may have been too subtle, was to ask the student, “How did you know how to walk?” But really, it’s the same principle. Kids don’t know they’ll be able to walk, and ducks don’t know they’ll be able to fly. It’s inborn: the result of evolved genes with perhaps a bit of learning. One day, a child gets up and takes a few steps, and a duckling flaps their wings and flies a few feet. 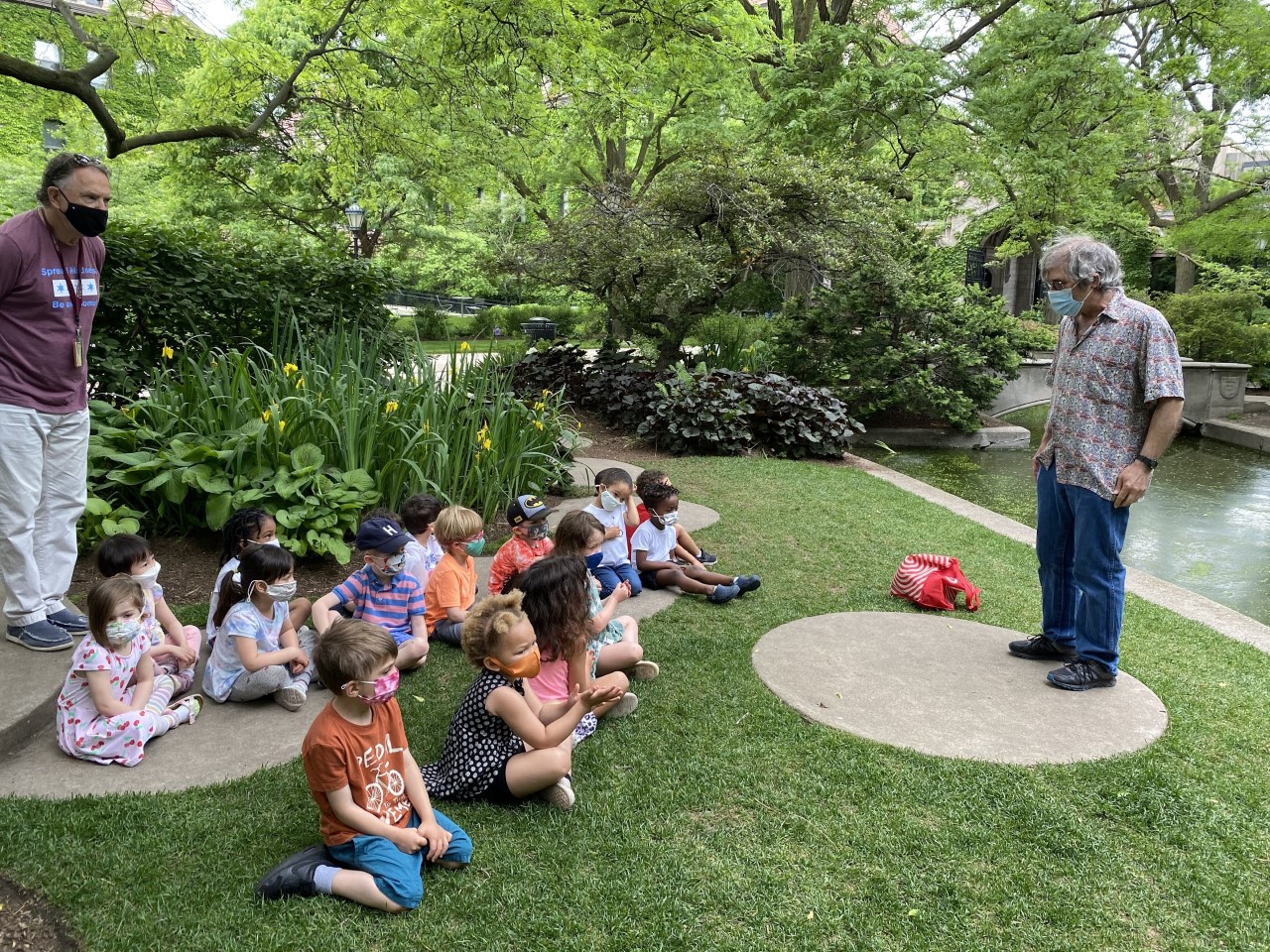 One young man showing excellent form feeding Dorothy’s brood. I told the kids to throw hard, as the kids are small and the ducks are some distance away. This is optimal form for duck-feeding. 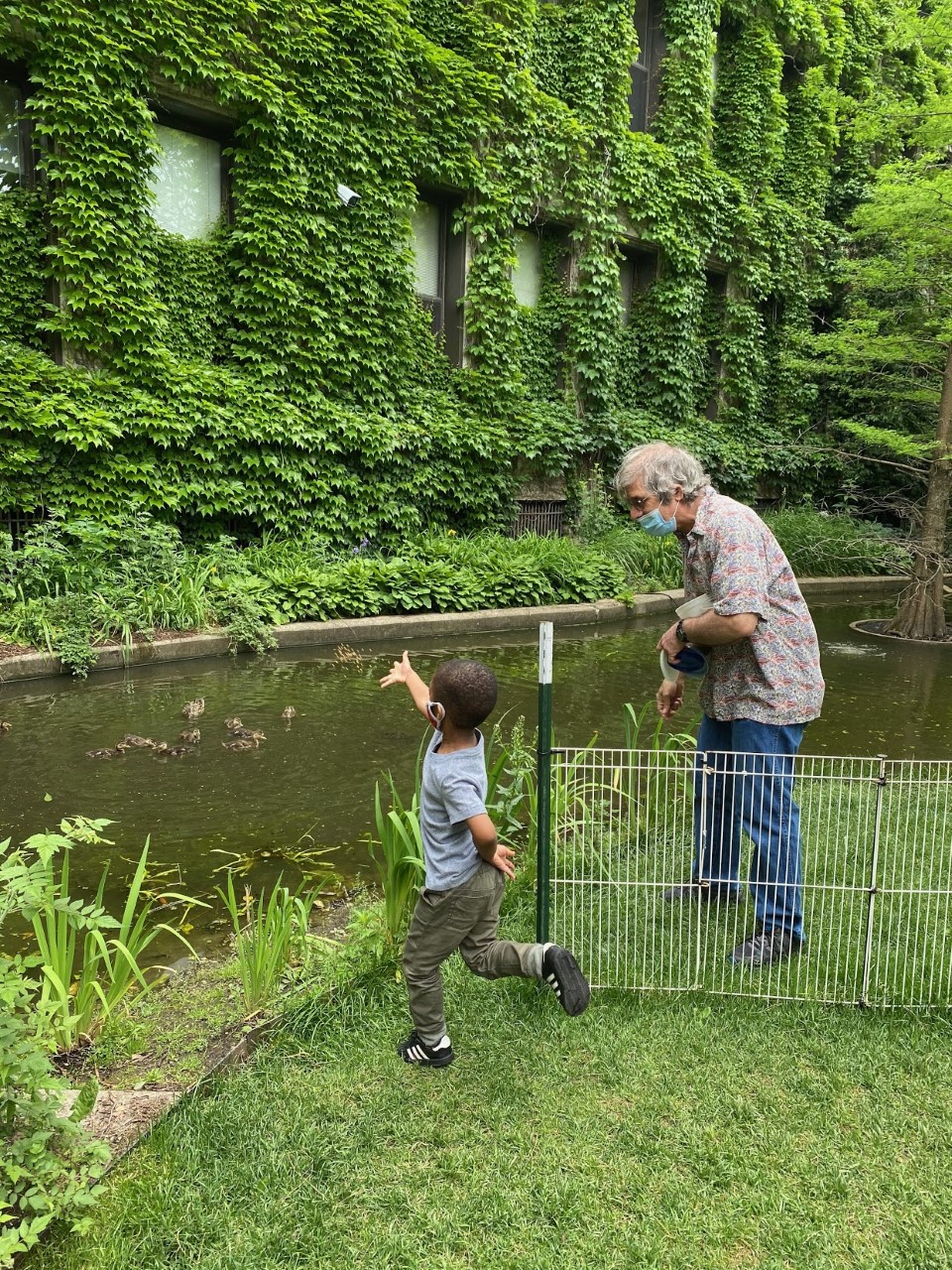 The ducks are now at the age when they celebrate the end of their afternoon meals by zooming around the pond and engaging in all sorts of aquatic antics: diving, racing, and, for Dorothy, flying a bit. Here are two videos showing those behaviors. Halfway through the video you can see Honey standing on the bank overlooking her brood of four.

Thanks to the Lab School for giving me permission to post the two photos of the Duck Lecture.