Ceiling Cat bless the bald pate of James Carville and the gray matter it conceals!  One thing you can count on with Carville is that he doesn’t mince words, and while you may not agree with him, you always know where he stands. In this new Vox interview, cited in Bari Weiss’s column I posted about earlier, Carville is worried about the Democratic Party and its message. If you say, as interviewer Sean Illing does, “Well, we won the Senate, the White House, and Congress, didn’t we?”, Carville will reply like this:

We won the White House against a world-historical buffoon. And we came within 42,000 votes of losing. We lost congressional seats. We didn’t pick up state legislatures. So let’s not have an argument about whether or not we’re off-key in our messaging. We are. And we’re off because there’s too much jargon and there’s too much esoterica and it turns people off. 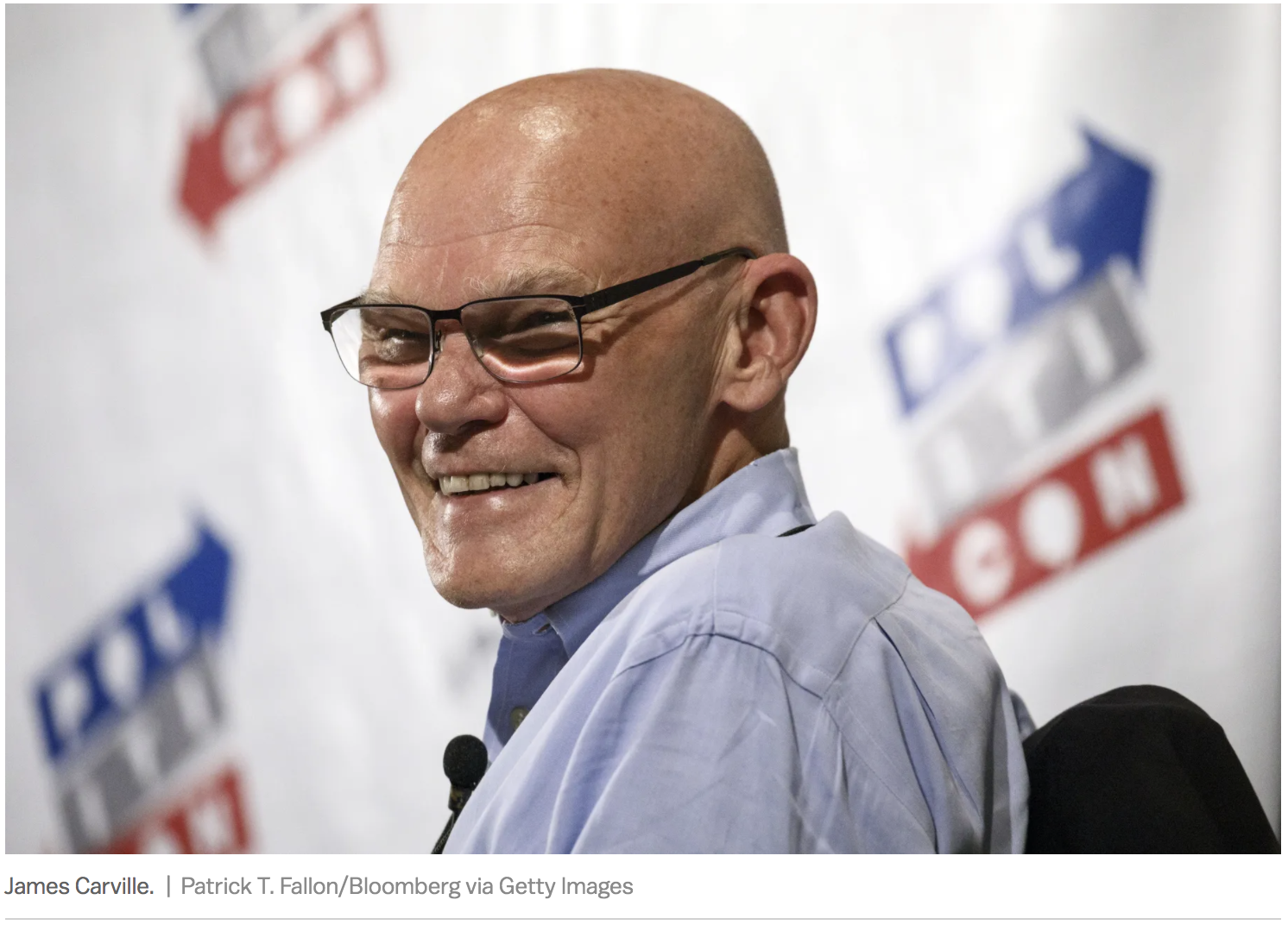 Carville is high on Biden and what he’s done, but he thinks that wokeness and academic-style jargon is turning off parts of the electorate that the Democrats need. A few of his examples:

Part of the issue is that Republicans are going to paint the Dems as cop-hating, fetus-destroying Stalinists no matter what they say or do. So, yeah, I agree that Democrats should be smart and not say dumb, alienating things, but I’m also not sure how much control they have over how they’re perceived by half the country, especially when that half lives in an alternate media reality.

Here’s the deal: No matter how you look at the map, the only way Democrats can hold power is to build on their coalition, and that will have to include more rural white voters from across the country. Democrats are never going to win a majority of these voters. That’s the reality. But the difference between getting beat 80 to 20 and 72 to 28 is all the difference in the world.

So they just have to lose by less — that’s all.

Note that the tweet about abolishing the cops comes from the odious and anti-Semitic Rashida Tlaib:

It wasn't an accident. Policing in our country is inherently & intentionally racist.

Daunte Wright was met with aggression & violence. I am done with those who condone government funded murder.

No more policing, incarceration, and militarization. It can't be reformed.

I don’t get the “lose by less” trope, for the Electoral College is basically an all-or-none affair, so if Democrats loss by less in Republican states (all but two states have a winner-take-all system), it makes no difference for the Presidency. Someone can enlighten me here.

Honestly, if we’re just talking about Biden, it’s very difficult to find something to complain about. And to me his biggest attribute is that he’s not into “faculty lounge” politics.

You ever get the sense that people in faculty lounges in fancy colleges use a different language than ordinary people? They come up with a word like “Latinx” that no one else uses. Or they use a phrase like “communities of color.” I don’t know anyone who speaks like that. I don’t know anyone who lives in a “community of color.” I know lots of white and Black and brown people and they all live in … neighborhoods.

There’s nothing inherently wrong with these phrases. But this is not how people talk. This is not how voters talk. And doing it anyway is a signal that you’re talking one language and the people you want to vote for you are speaking another language. This stuff is harmless in one sense, but in another sense it’s not.

There’s more, but you should read it for yourself. As for what Carville suggests, well, he’s mainly trying to raise the problem rather than solve it, but he does suggest some approaches. One involves livening up discourse about climate change: fewer boring stats and more slogans. And hit Republican miscreants as hard as they hit the Democrats (his example is to pay more attention to the Right storming the Capitol). As he says (my emphasis):

There’s a philosophy on the left right now, which says the Democrats should pass everything they possibly can, no matter the costs, and trust that the voters will reward them on the back end.

Where do you land on that?

First of all, the Democratic Party can’t be more liberal than Sen. Joe Manchin. That’s the fact. We don’t have the votes. But I’ll say this, two of the most consequential political events in recent memory happened on the same day in January: the insurrection at the US Capitol and the Democrats winning those two seats in Georgia. Can’t overstate that.

Hell, just imagine if it was a bunch of nonwhite people who stormed the Capitol. Imagine how Republicans would exploit that and make every news cycle about how the Dems are responsible for it. Every political debate would be about that. The Republicans would bludgeon the Democrats with it forever.

So whatever you think Republicans would do to us in that scenario, that’s exactly what the hell we need to do them.

Now I suspect a lot of readers will disagree about Carville’s diagnosis. The part about wokeness, though, resonates with me. The fact is that the vaunted “Blue Wave” just didn’t appear in the last elections, and the midterms in two years  historically represent a loss of power for the ruling party. We do have cause to worry and we should, as Carville notes, be speaking Yiddish rather than Hebrew.

55 thoughts on “James Carville is worried about the Democrats’ message”