I’ve always thought of “systemic racism” as meaning “racism that is formally ingrained and codified within a system”, like a college or a governmental department. . That is, there are policies or laws that are racist in such organizations. Now, though, I see that the term seems to be used as a substitute for pervasive or endemic racism. In other words, “systemic racism” now seems to have become a synonym for “racism,” with the “systemic” apparently adding no information except a highfalutin tone. Sometimes, though, as in the first contributor below, it’s taken to mean “unwritten practices by a group that have the effect of being racist.”

Over at her Substack site, Common Sense, Bari Weiss has a round-table column in which six people, whose names appear in the title below, try to explain what “systemic racism” means, at least to them.  I like this kind of post, as you get to see different points of view. The people she collects, while generally on the “anti-woke” side of things, are not all like that.

Click on the screenshot to read it. First, there’s an intro by Weiss:

One bit of [academic] jargon — much like “equity” and “social justice” — is the phrase “systemic racism.”

Is systemic racism merely legal discrimination? Or does it capture the legacy of slavery and segregation? Is it meant to describe ill-conceived policies, like the response to the crack epidemic? Or is it something far more expansive, sweeping up any kind of racial disparity as evidence of its existence?

It seems to me that these are exactly the reasons why we need to discuss this morally freighted and confusing phrase.

So today I invited a group of writers I admire and who challenge me to weigh in on the question: What is systemic racism? 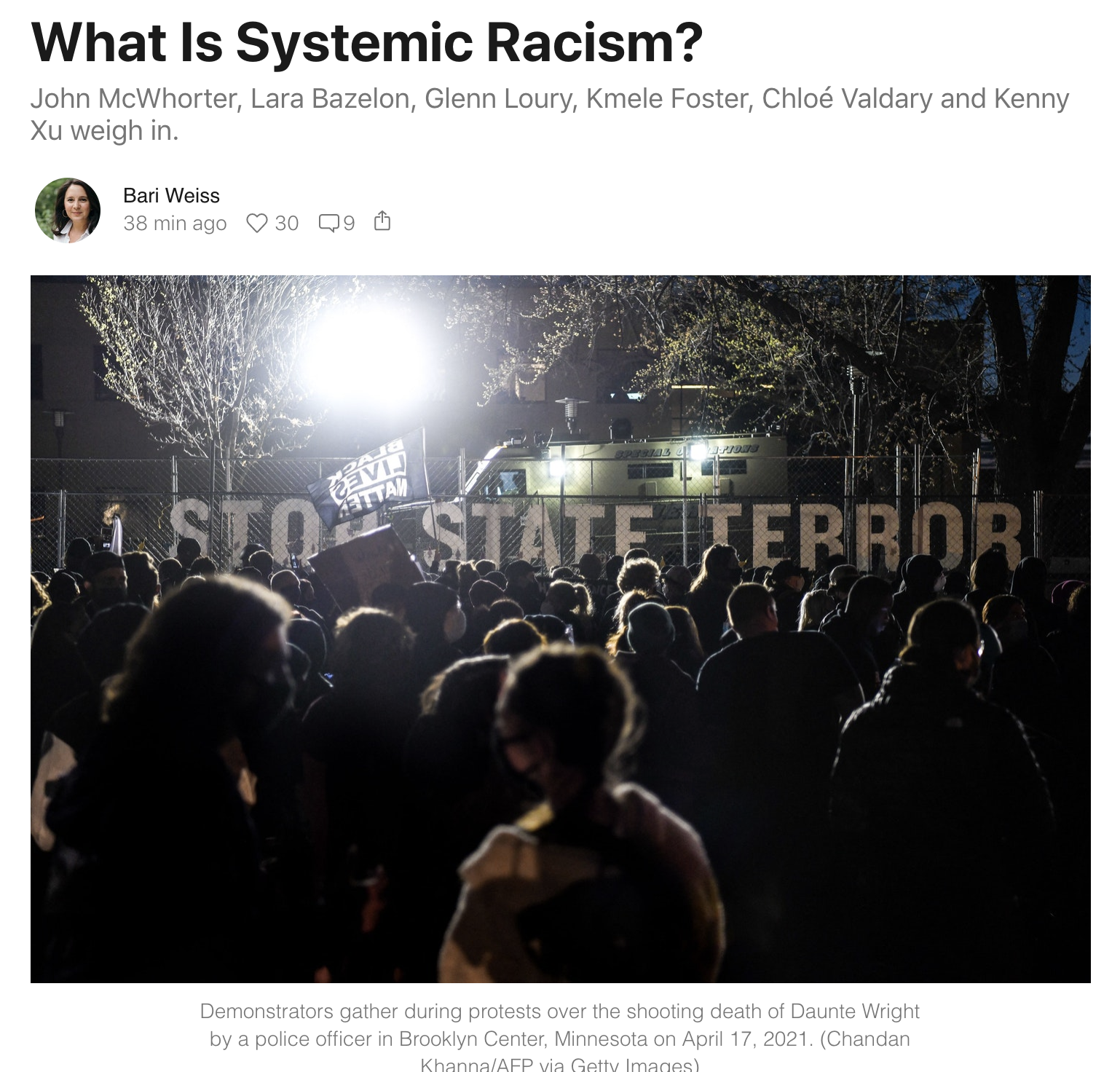 It turns out that it means different things to these six people, but only one meaning adhering to how I construed the term.

To Lara Bazelon, a professor of law at the University of San Francisco and head of the criminal and racial justice clinics, it is not anything enshrined in law, but a practice used consistently by the criminal-justice system in Louisiana, which allows a judge to double the maximum sentence of anyone convicted of a felony if they have a prior felony conviction. This got one of her clients, apparently innocent, 60 years without parole (his original felony, at 17, was for a drug sale). This invocation of the “double-time” law is used “overwhelmingly against Black people, many of them teenagers”. I believe her; the only question I have is whether, because blacks may well constitute most of those convicted, they are subject to the law on a per capita basis more often than whites. I suspect they are.

To Bazelon, then, “systemic racism” is not enshrined in law, but a common practice by an institution that is unfair towards black people.

Kmele Foster is co-host of the podcast “The Fifth Column, sees “system racism” as a blanket term for anything that results in inequity (outcomes disproportionately leaving out minority groups).  And, like others in the group (see below), he notes that one cannot truly say that inequality of outcomes reflects existing racism:

When invoked by activists or academics, the concept is deceptively matter-of-fact. If America’s laws and institutions tend to generate racially disparate outcomes, then, irrespective of intent, the country is “systemically racist.” This definition makes it easy to fold everything from the impact of Covid-19 to police-involved killings to standardized testing into the same politically charged and counterproductive framework.

Each of these issues has been contaminated by racial politics, but perhaps none more so than education.

In New York and San Francisco, concerns over “systemic racism” have led lawmakers to largely abandon their responsibility to actually fix chronically failing schools. What have they done instead? Degraded admissions standards for their best-performing magnet programs because there were too many Asian and white students. Launched campaigns to rename schools deemed to have offensive names. And, most disturbing of all, they’ve committed themselves to making public school campuses ideological battlegrounds —condemning the very idea of merit and insisting that black students should not be held to the same standards as their white peers.

It’s a perverse ratcheting down of expectations and a reflection of an ideological program more concerned with racial parity than meaningful progress.

Linguist John McWhorter again raises the clear fact that inequities of outcome do not necessarily reflect current racial progress. He agrees with Foster about how “systemic racism” is used: as an untested way to explain inequalities of outcome:

The idea behind the phrase is that inequities between whites and blacks on the societal level, such as in scholastic achievement, wages, wealth, quality of housing and health outcomes, are due to racist bias of some kind, exercising its influence in abstract but decisive ways. As such, the existence of these inequities represent a sort of “racism” that must be battled with the same urgency and even indignation that personal “prejudice” requires.

The problem is that sociology and social history are more complex than this interpretation of “systemic racism” allows.

. . . I find the term “systemic racism” to be the most nettlesome term in the English language at present.

As you might expect, McWhorter’s pal and fellow discussant Glenn Loury, an economist at Brown, agrees: “systemic racism” is a spectre invoked to explain inequities. But he goes further, making the controversial statement that equality of opportunity has already been attained by African Americans:

But acknowledging this complexity is too much nuance for those alleging “systemic racism.”

They ignore the following truth: that America has basically achieved equal opportunity in terms of race. We have chased away the Jim Crow bugaboo, not just with laws but also by widespread social customs, practices, and norms. When Democrats call a Georgia voter integrity law a resurgence of Jim Crow, it is nothing more than a lie. Everybody knows there is no real Jim Crow to be found anywhere in America.

. . . My deep suspicion is that these charges of “systemic racism” have proliferated and grown so hysterical because black people — with full citizenship and equal opportunity in the most dynamic country on Earth — are failing to measure up.  Violent crime is one dimension of this. The disorder and chaos in our family lives is another. Denouncing “systemic racism” and invoking “white supremacy,” and shouting “black lives matter,” while 8,000 black homicides a year go unmentioned — these are maneuvers of avoidance and blame-shifting.

That will not win him any friends among blacks! And is there really equality of opportunity if you’re behind in the race from the day you’re born?

Kenny Xu is identified as “the author of “An Inconvenient Minority: The Attack on Asian American Excellence and the Fight for Meritocracy,” forthcoming in July.”  Xu’s take on systemic racism is pretty much a hybrid of Bazolon’s and McWhorter + Loury’s: a habitual form of racial discrimination that results in inequity of outcomes and is not part of written policy. His example, however, is Harvard’s policy of discriminating against Asian-Americans, which, based on their scores, should constitute about 40% of Harvard’s undergraduate population when it actually constitutes less than half that. Although Harvard was found not guilty in court of discriminating against Asian students by lowering their “personality scores,” this case is going to a higher court, and I think it has merit. There is some rationale for affirmative action that might lower the Asian-American population at Harvard below that stemming from their academic credentials alone, but a more-than-50% cut seems grossly unfair.

Chloé Valery is identified as “the founder of Theory of Enchantment”, a “compassionate antiracism program” based on the teachings of Martin Luther King, Jr.  She takes “systemic racism” as I understood it, using as an example the Jim Crow laws of the post-bellum South as well as slavery.  She argues that racism reflected the “spiritual desiccation” of whites who compensated for their emptiness by grossly mistreating blacks. You can hear the echo of Dr. King in her words, which seem curiously disconnected from the question at hand, but are still eloquent:

Spiritual desiccation had taken over American life and this poverty drove white citizens to overcompensate by beating and murdering those who were different from them.

Perhaps for this reason alone, it is worth considering the limitations in using the metaphor of a mechanical “system” to describe racism, since racism becomes more likely when we are cold and mechanical, machine-like, numb to the conundrum of our own lives and those around us. If we want to combat the scourge of prejudice, we ought to commit to reversing this process, and take responsibility for the beauty of our own lives, both its tragedies and its joys.

My conclusion: we should completely ditch the term “systemic racism” because it is confusing and means different things to different people. You can always apply more accurate adjectives to be more specific, like “ingrained racism” for the Louisiana case. Or, not use “racism” at all in cases in which it’s a convenient but untested excuse for inequity of representation. I myself don’t use the term “systemic racism” because it is imprecise and can be understood in diverse ways.