And it’s another Three Bun Day, as I saw three Eastern Cottontails on my walk to work. They don’t live very long, but nor are they aware of their mortality.

Wine of the Day: This bottle from Domaine Hippolyte Reverdy may be the first Sancerre I’ve had (it’s a French appellation with most whites made from sauvignon blanc). It’s not a wine I look for, and can’t remember buying this one, though I have $30 written on the bottle, so that’s what I paid. Was it worth it? I don’t think so. It’s a decent specimen of sauvignon blanc, redolent of citrus and apple, but one can do better: equally good sauvignon blancs are available for $20 or less. You win some, you lose some. . .

Drunk with fettucine alfredo; a slight touch of sweetness would have improved the pairing. 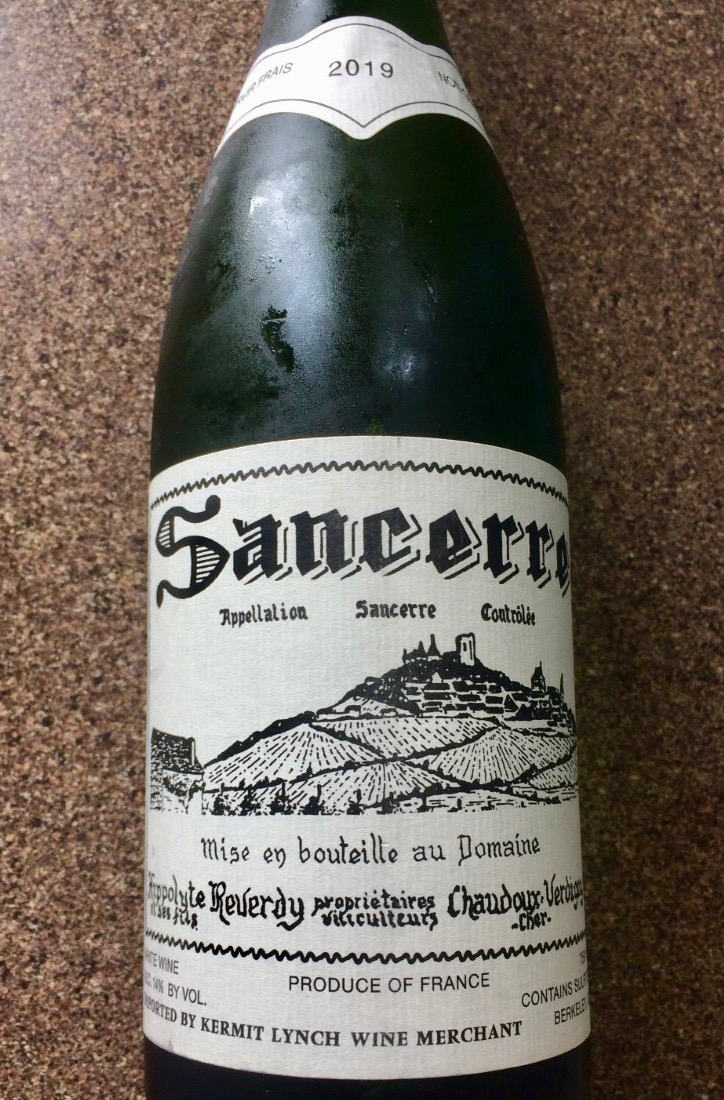 In an op-ed at the NYT, mercifully free of politics, Salman Rusdie’s thesis is “The stories we love make us who we are.” An exponent of magical realism, at least in his best book, Midnight’s Children, Rushdie says this:

This is the beauty of the wonder tale and its descendant, fiction: that one can simultaneously know that the story is a work of imagination, which is to say untrue, and believe it to contain profound truth. The boundary between the magical and the real, at such moments, ceases to exist.

In his paean to “wonder tales,” one of Rushdie’s favorite novels is also in my pantheon of the greats:

When, as a college student, I first read Günter Grass’s great novel “The Tin Drum,” I was unable to finish it. It languished on a shelf for fully 10 years before I gave it a second chance, whereupon it became one of my favorite novels of all time: one of the books I would say that I love. It is an interesting question to ask oneself: Which are the books that you truly love? Try it. The answer will tell you a lot about who you presently are.

Well, you can take issue with his thesis, but not with the claim that The Tin Drum is one of the best novels of our time.

A fossil fruit, 52 million years old, has been discovered , a tomatillo found in South America.  (h/t Nicole) It shows this:

Delicate fossil remains of tomatillos found in Patagonia, Argentina, show that this branch of the economically important family that also includes potatoes, peppers, tobacco, petunias and tomatoes existed 52 million years ago, long before the dates previously ascribed to these species, according to an international team of scientists.

According to the Guardian, the body of a missing Catalonian man was found inside the leg of a large dinosaur statue. What a way to go, too: a police spokesperson explained the tragedy this way:  “It looks as though he was trying to retrieve a mobile phone, which he’d dropped. It looks like he entered the statue head first and couldn’t get out.” (h/t: Matthew Cobb)

And another strange story, this time from the BBC: Criminal trapped by a photo of Stilton cheese!  Carl Stewart, 39, posted this photo on an encrypted messaging service, which was decryptic by the police: 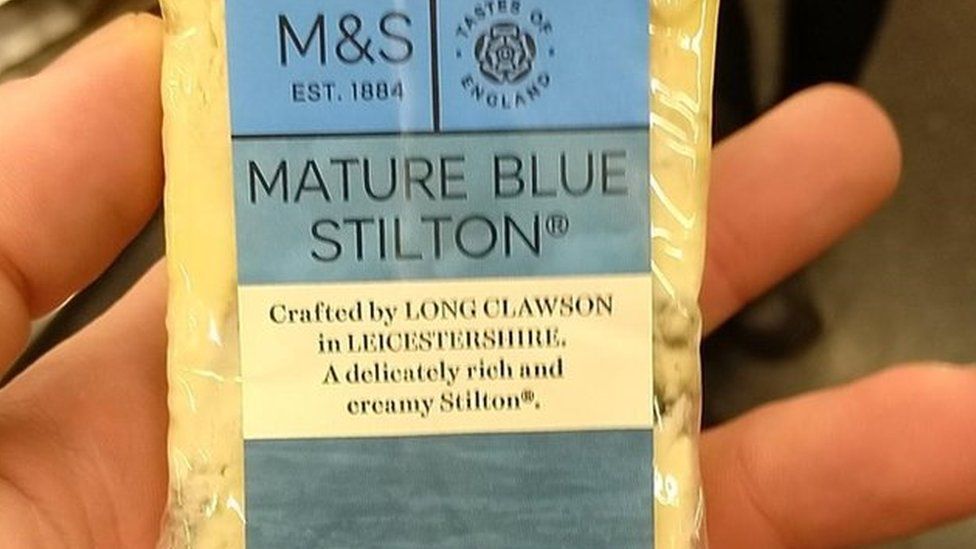 His finger and palm prints from the photos were sufficient to get him indicted for conspiracy to supply heroin, cocaine, ketamine and MDMA, as well as for transferring criminal property.  He’s now in jail for over 13 years because he broadcast his love of Stilton cheese! (h/t: Jez)

From the Times of Israel, Blake Ezra has a good piece about the distortions of the media (and by others, including celebrities) about the recent battles in the Middle East: “I’m fed up.” Ricky Gervais’s comment about Hollywood celebrities in the piece is appropriate.

Stuff that happened on May 25 includes:

Can you imagine the relief of those people who no longer had to eat annelids?

Wilde moved to France the day he was released from prison and never came back to Britain. Here’s his tomb in the Pere Lachaise Cemetery in Paris, photographed by me three years ago. A plexiglas barrier surrounds Jacob Epstein’s superb tomb, as people would cover the sculpture with lipstick by kissing it (you can see some kiss marks in the photo): 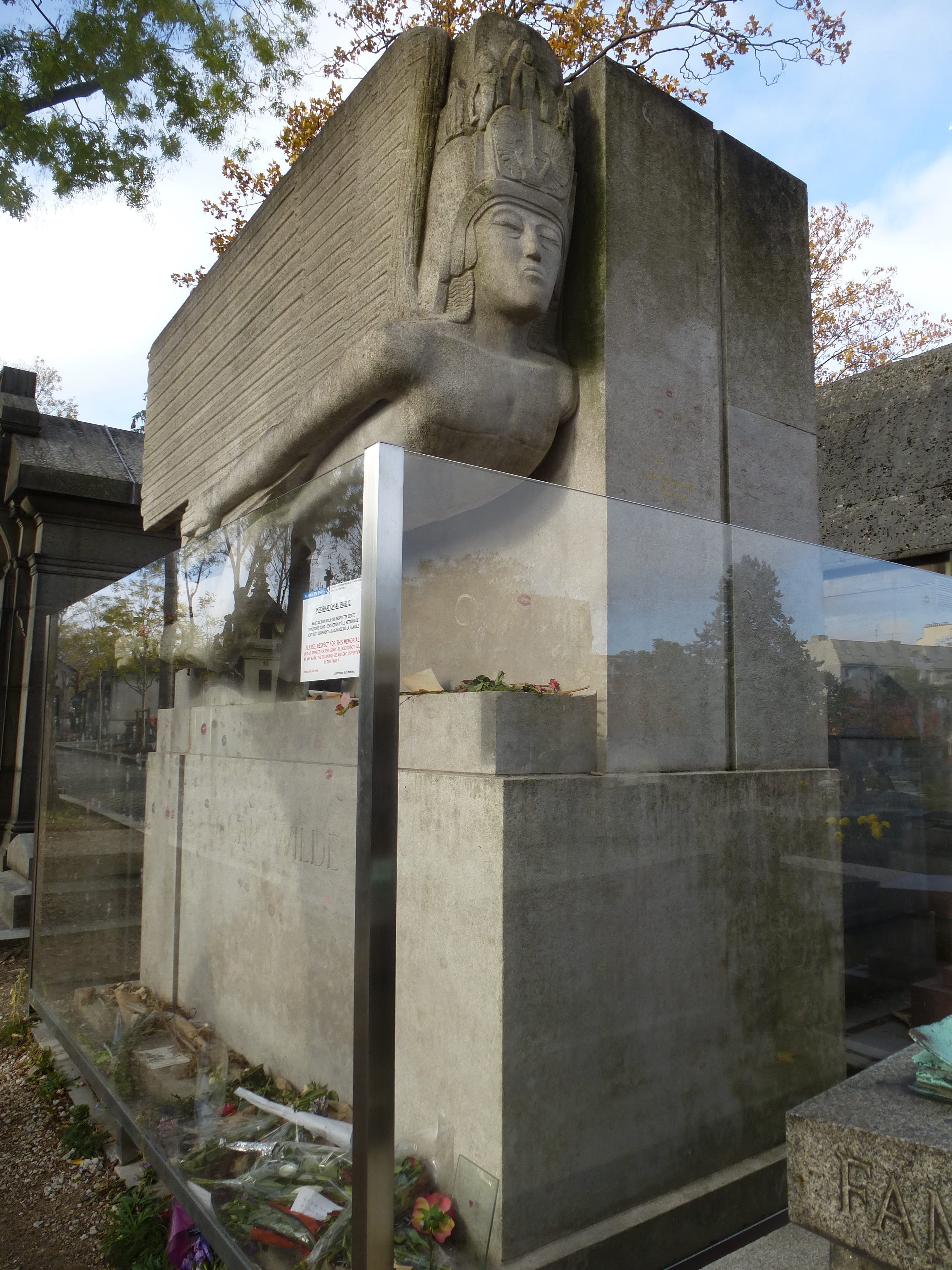 Here I am honoring Scopes at his gravesite in Paducah, Kentucky. The Discovery Institute excoriated me for publishing this picture, saying that I was honoring a man who taught eugenics and racism. But he didn’t: he taught human evolution for one day as a substitute teacher (the other stuff was in the textbook he used for that day, but didn’t teach): 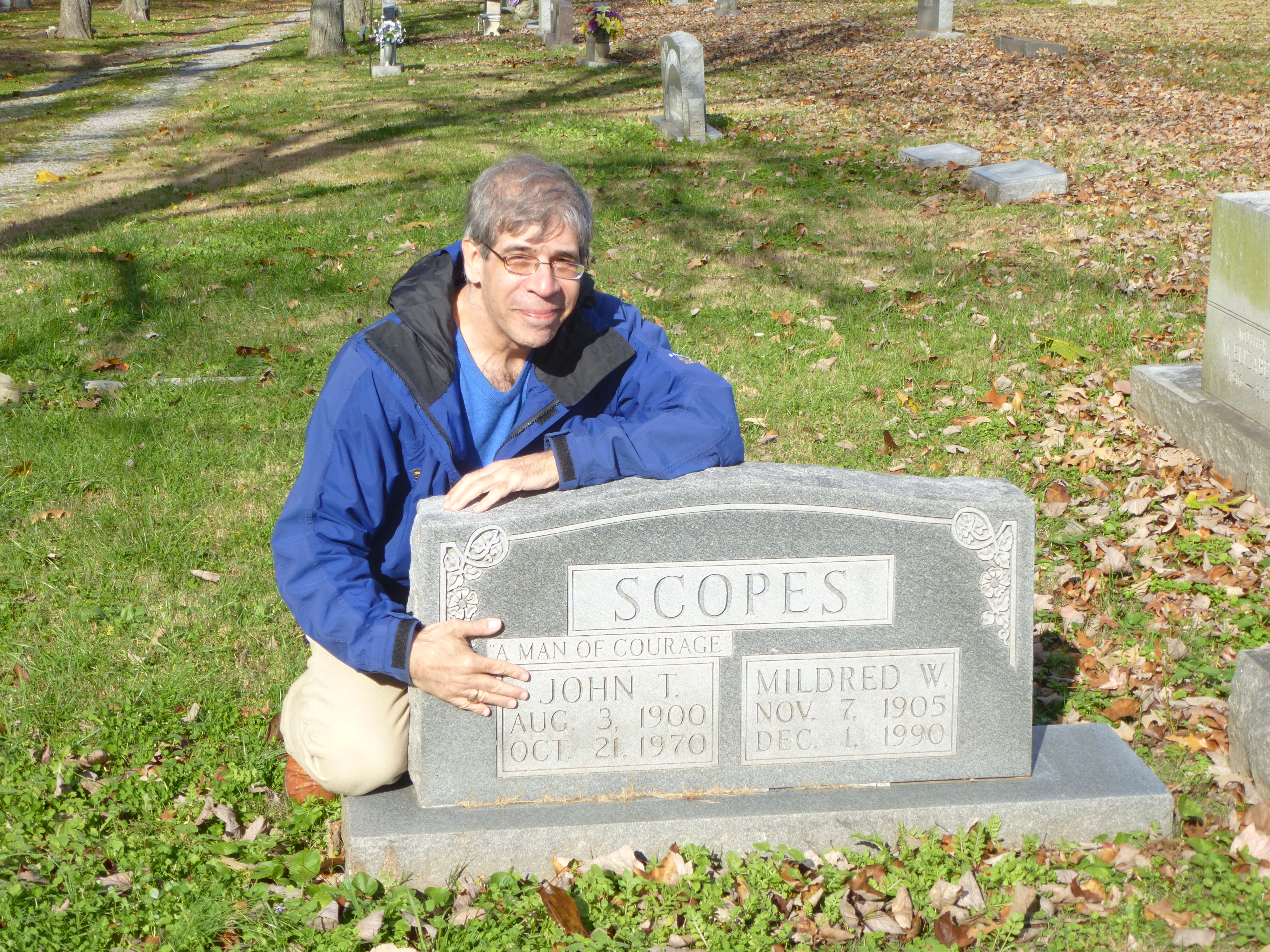 I went to Darjeeling in India largely to see Kanchenjunga from Tiger Hill, the prime viewing spot. For four days the mountain was invisible, socked in by clouds, and then, the day before we left, I climbed Tiger Hill with my camera and tripod an got a morning view of Kanchenjunga that looked like this:

Remember this? Well, a continuous chain of linked human hands wasn’t achieved, though 6.5 million people participated, but it was sort of successful. From Wikipedia:

In order to allow the maximum number of people to participate, the path linked major cities and meandered back and forth within the cities. Just as there were sections where the “line” was six to ten people deep, there were also undoubtedly many breaks in the chain. However, enough people participated that if an average of all the participants had been taken and spread evenly along the route standing four feet (1.2 m) apart, an unbroken chain across the 48 contiguous states would have been able to be formed.

Here’s Weihenmayer on the summit: 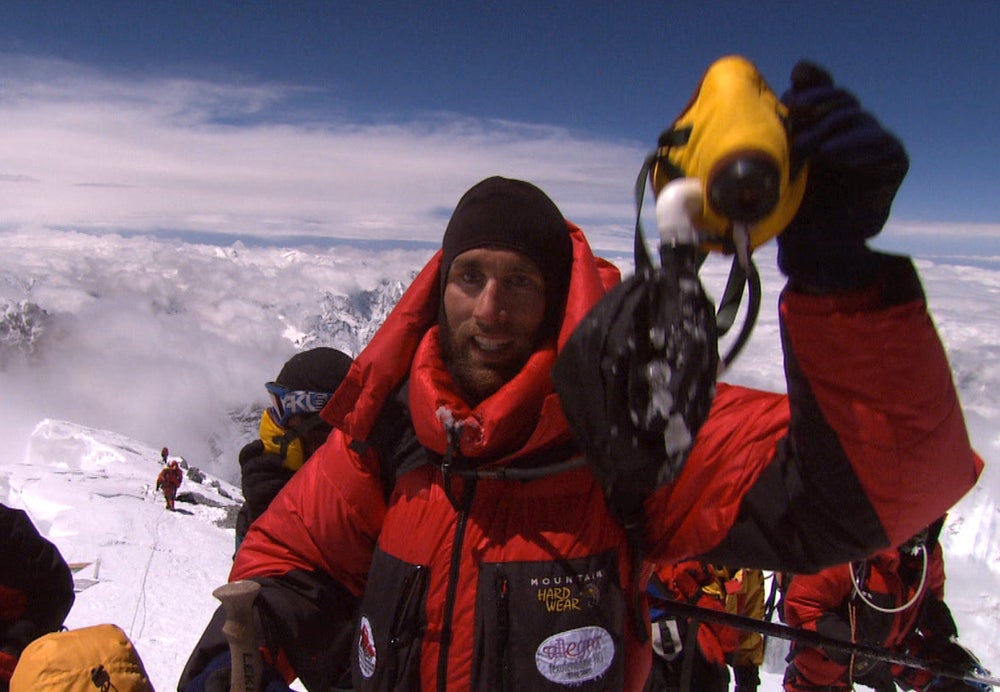 Robinson, a superb tap dancer, was invariably relegated to the “subservient black man” roles. Here he is doing a dance on a staircase:

Those who exited this life on May 25 were few, and include:

Capa was the only photographer to land with U.S. troops on Omaha Beach on D-Day. Here’s one of the eleven photos he took of the landing: 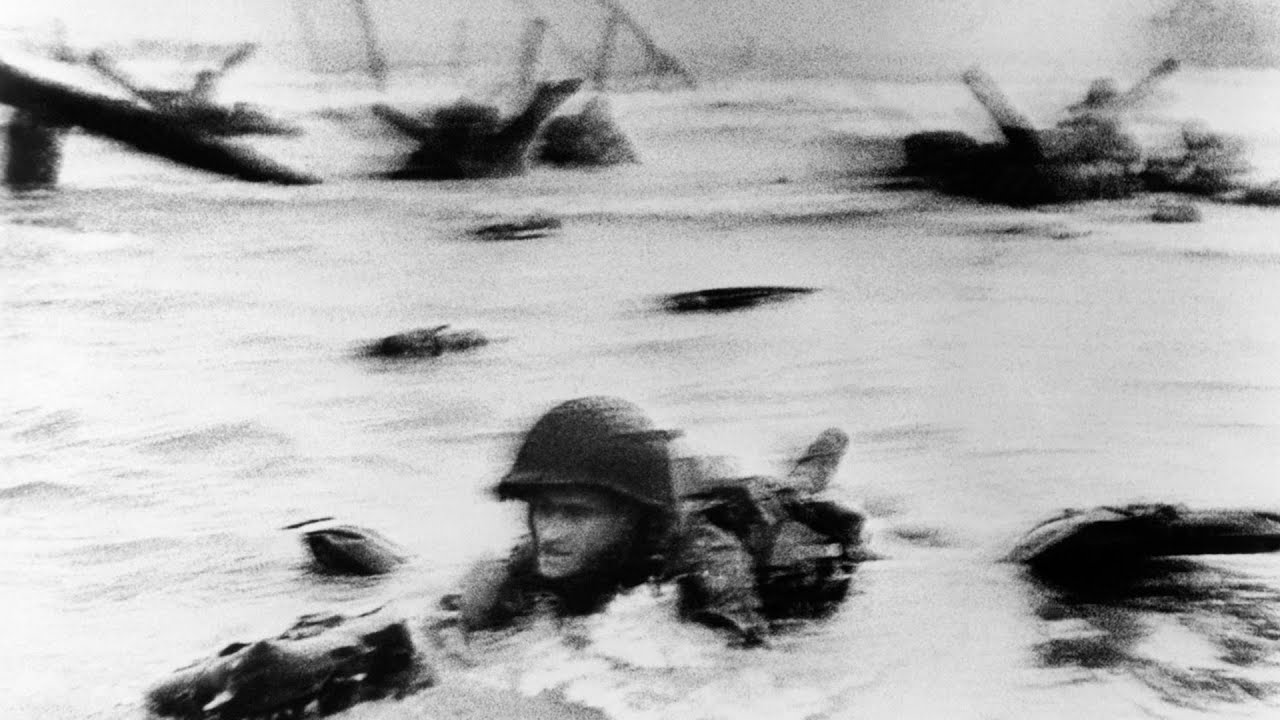 Author of The Man in the Gray Flannel Suit, Wilson was the father of biologist David Sloan Wilson.

Meanwhile in Dobrzyn, there is some joy this day, at least from Paulina:

Paulina: At last some good news from the world.
Hili: You must be joking again.
(Photo: Paulina R.) 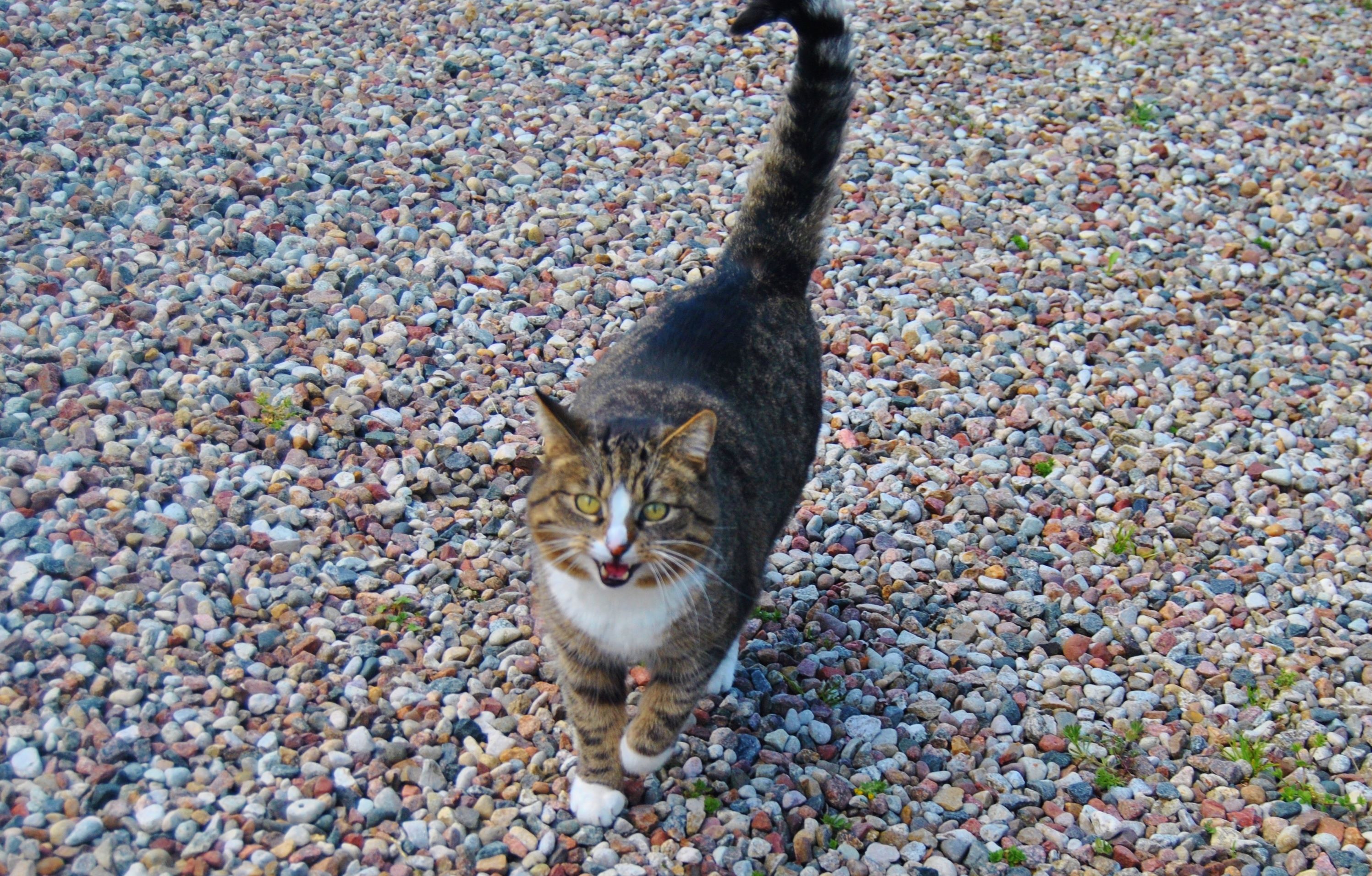 And Szaron’s hiding in the space where firewood is stored: 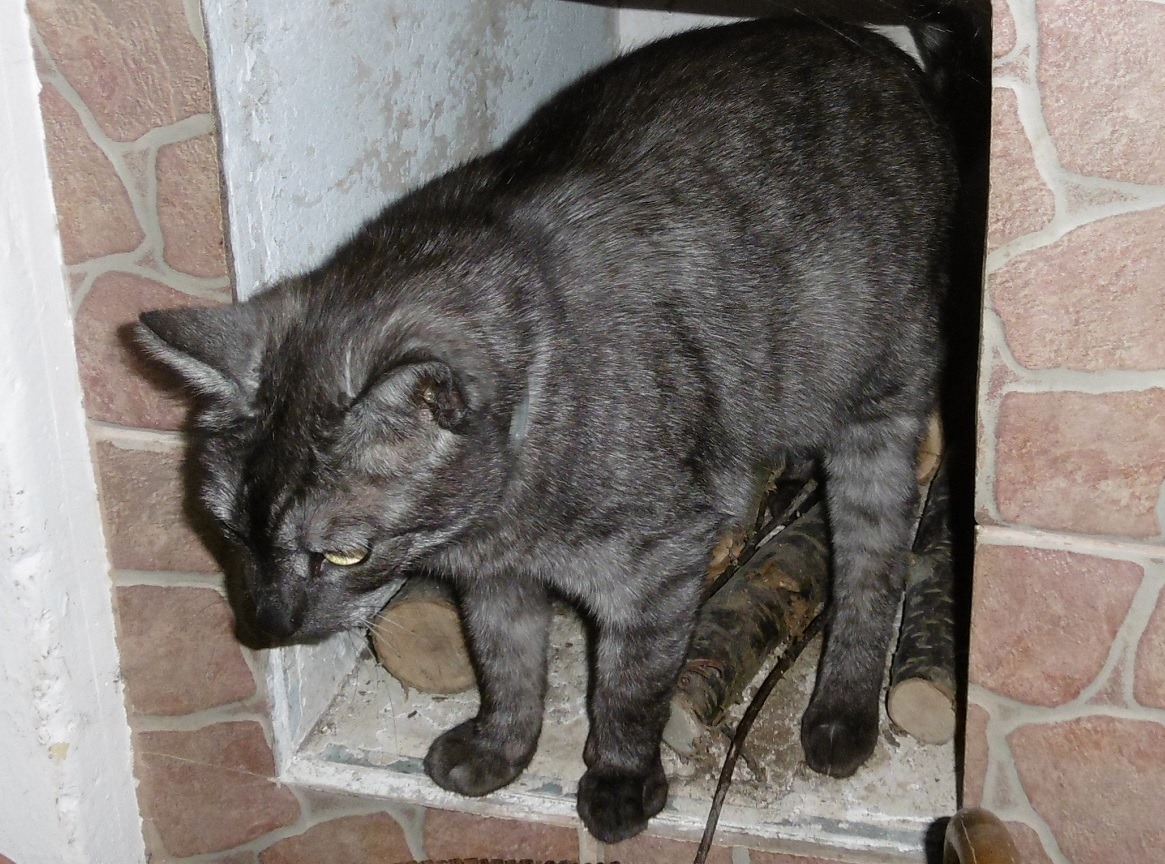 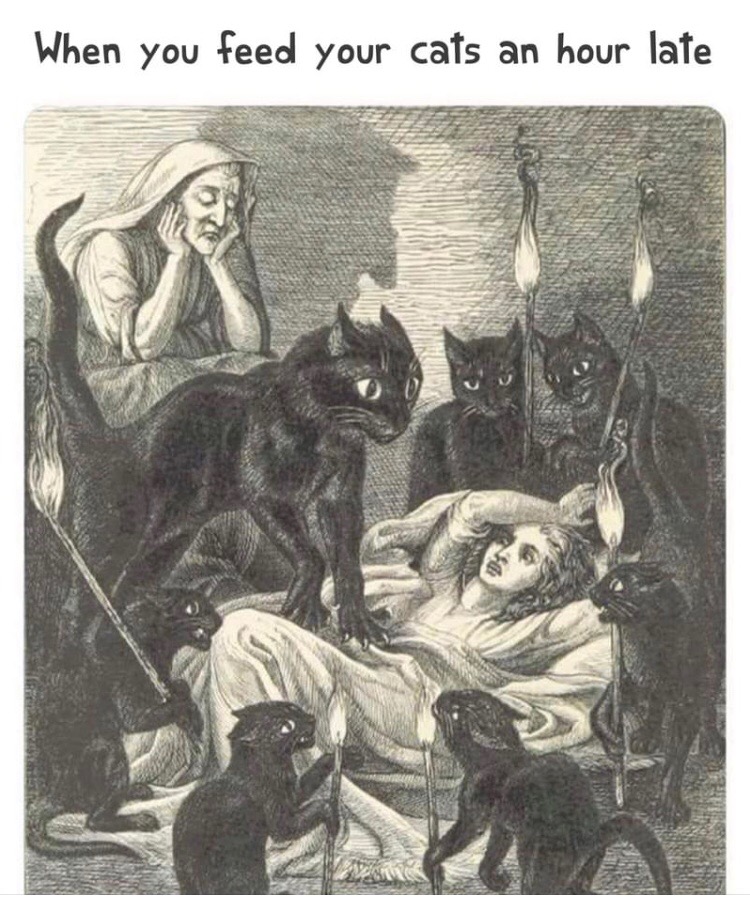 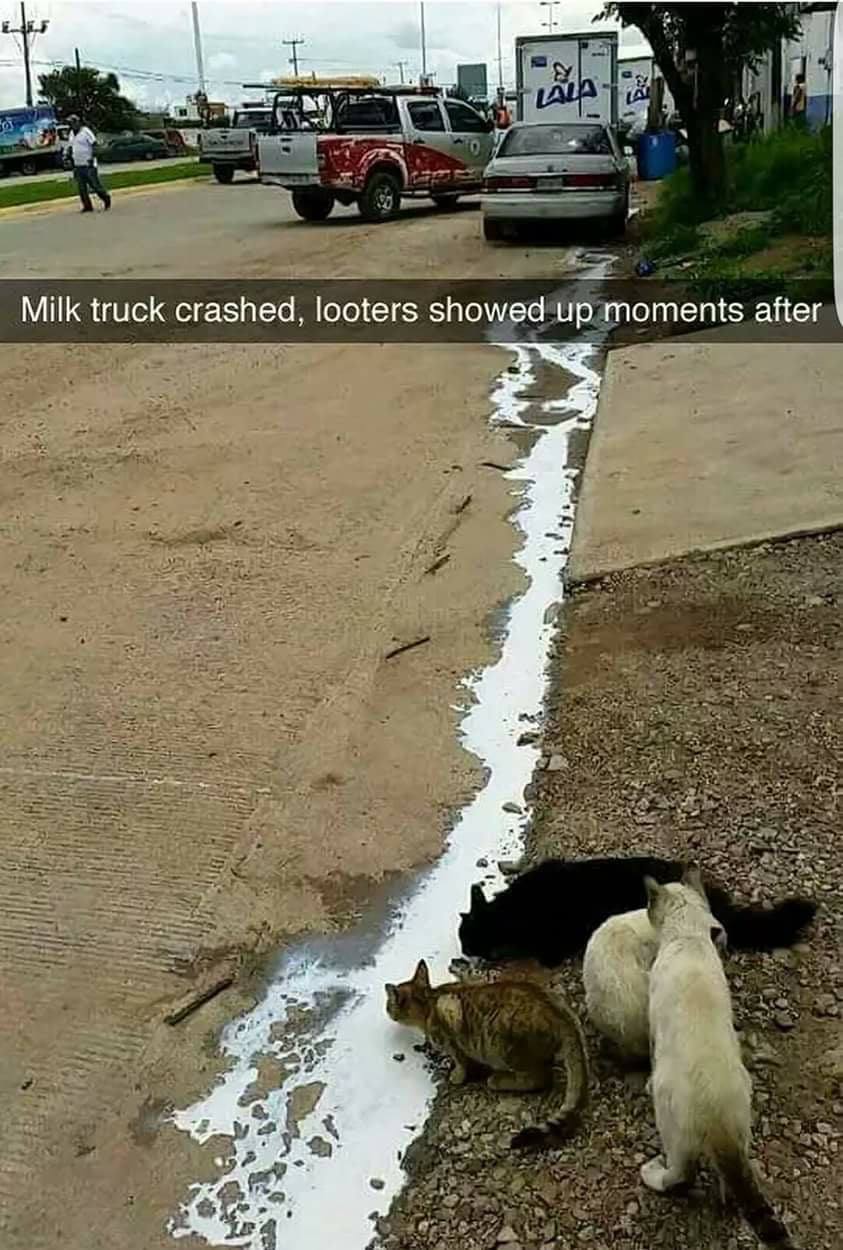 From Bruce, a grilled chicken: 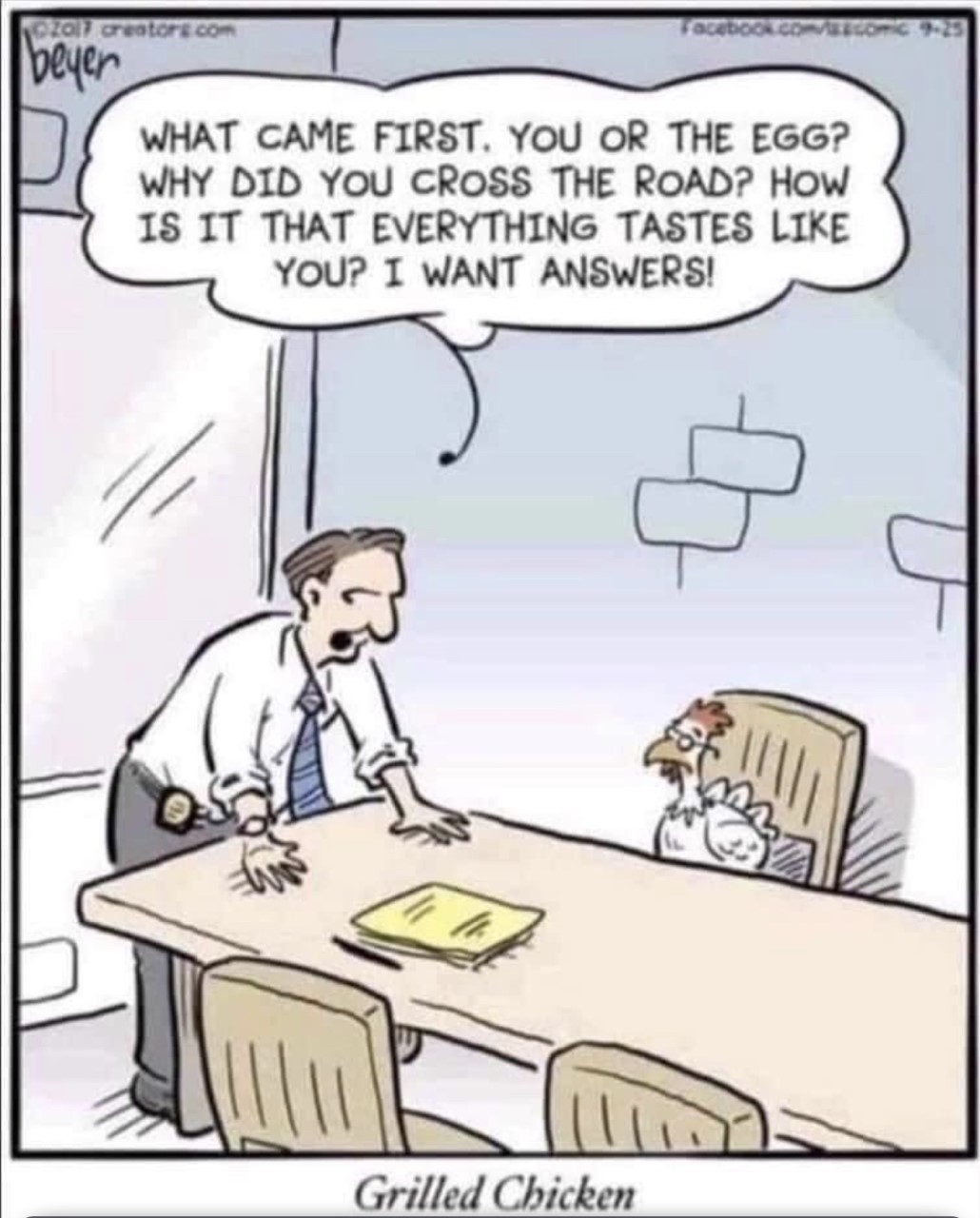 One of many odious tweets by a working BBC journalist. People are demanding she be fired, but I won’t join that mob.

Tala Halawa is a "digital journalist" for the @BBC.

Halawa directly influences and creates news content watched by many millions around the world.

In what world can someone like this work for a professional news outlet? pic.twitter.com/r2LIHmZfF2

She’s not that into you.. 😅 pic.twitter.com/YCVIswEJrB

Tweets from Matthew. Learn this trick, for some day it may save your life:

If you get lost at sea after a shipwreck, simply balance the sector on your nose and measure the angle between the sun and the horizon. Then you'll know where you are! From "Le grand & nouveau miroir ou flambeau de la mer" https://t.co/rYxQ8eYkhz pic.twitter.com/NKMlZp7B1f

While the familiar munching and slurping of the dinner table are innocuous enough to most, those with misophonia – literally a hatred of sound – can find them profoundly irritating, to the point that they become disgusted, anxious, angry and even violent.

Does anyone here have misphonia?

Research reveals why some find the sound of others eating so irritating https://t.co/G17YyywIsK

I didn’t know there was a Duck of the Day site. Fortunately, Matthew is following it:

Below: the average distance traveled by swifts was 570 km per day, but they often went much farther: the record was 830 km per day (roughly 500 miles) over nine days!

Swifts set new record for swiftness https://t.co/Yq5obgQyka The maximum recorded distance in the study was more than 500 miles per day over nine days.

Now THIS is a gorgeous beetle:

A failed prediction from Mechanix Illustrated: