This week’s New York Times has a decent essay (click on screenshot below) by John McWhorter on the history of the “n-word”, which he actually spells out repeatedly—34 times. The reason? He’s discussing three things: the origin of the word, its various morphs and meanings, and how it became a slur at the same time that once-unsayable words like “fuck” have become pretty mainstream. 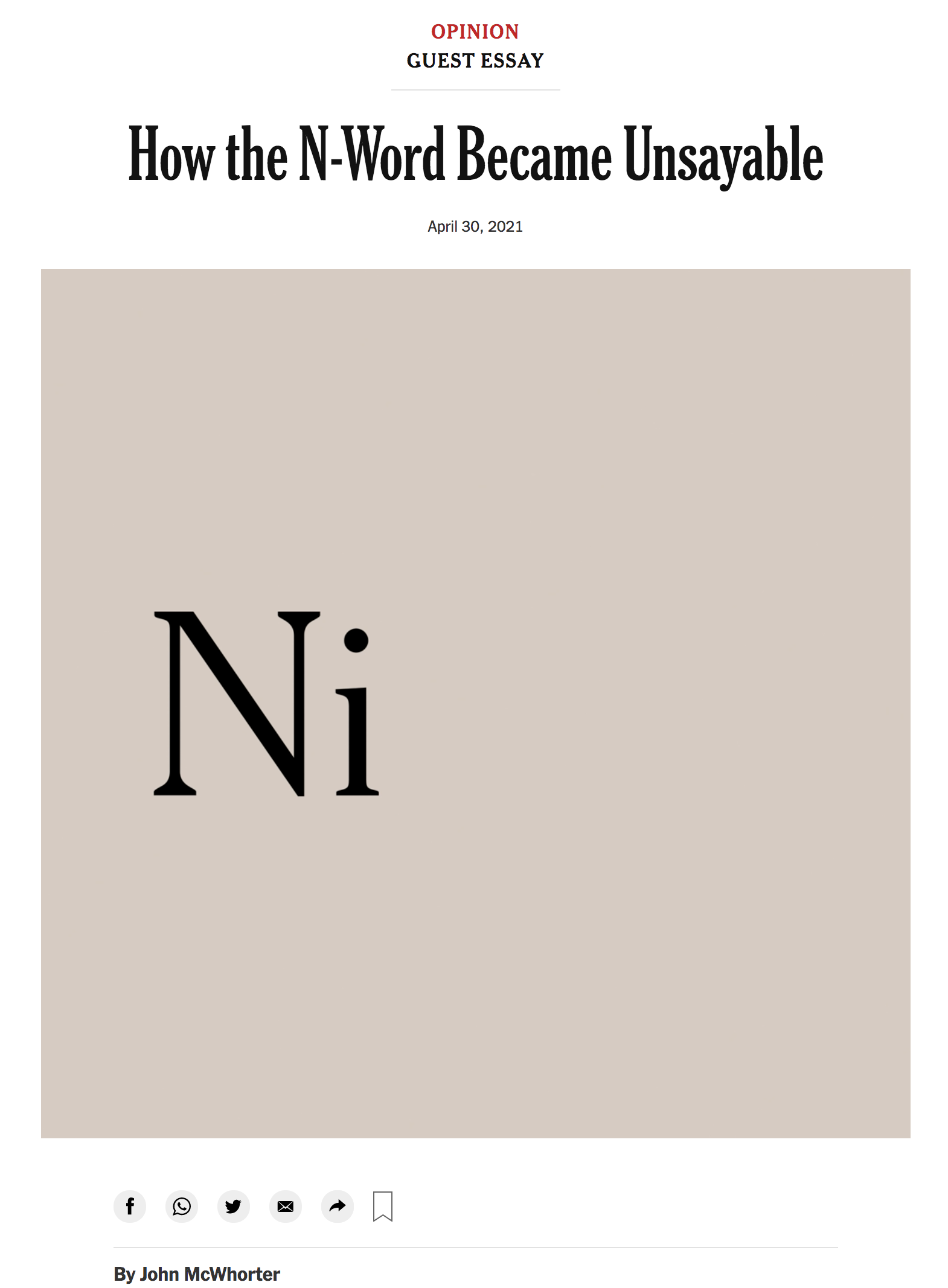 As McWhorter notes, the use of the n-word as a complete taboo has been in the air for some time, and was still used openly on “The Jeffersons” television show and on McWhorter’s own radio interviews. But when Christopher Darden refused to utter the word during the O. J. Simpson trial (remember that Detective Mark Fuhrman was accused of having used it), the true taboo period began, and of course is with us still. It’s even taboo to use it in a didactic fashion, or reading it as part of literature (see below).

This essay is not one of McWhorter’s best efforts, I thought, but is still well worth reading. I wasn’t as interested in the etymology of the word as how and when it became taboo, and in McWhorter’s main point, which he states succinctly:

Our spontaneous sense is that profanity consists of the classic four-letter words, while slurs are something separate. However, anthropological reality is that today, slurs have become our profanity: repellent to our senses, rendering even words that sound like them suspicious and eliciting not only censure but also punishment.

In other words, the n-word is the new “fuck”.

Another issue with McWhorter’s essay is that he offers no opinion on whether the word can be uttered didactically, as in a reading of Huckleberry Finn or in a classroom discussion. While McWhorter clearly feels it’s warranted in his essay (he spells it on in full over thirty times), this is an essay on etymology and the demonization of a word—not exactly the same thing as teaching a book that uses the word. I would have expected McWorter to give an opinion about using the word in full in other contexts, but he doesn’t.

But perhaps he was prevented from doing so. If you recall from earlier this year, NYT science writer Donald G. McNeil, Jr. was forced to resign because he used the word, and in a didactic context, on a trip with students to Peru. McNeil was simply trying to ascertain whether the word was actually used by another student, and was not using it as a racial slur.

It didn’t matter. As editor Dean Baquet emphasized in the NYT’s statement (my italics)

“We do not tolerate racist language regardless of intent.”

In other words, as the Daily Beast summarized its summary of the NYT staffers’ objections, which swayed Baquet from merely disciplining McNeil to eventually firing him:

But the company’s conclusion about McNeil’s intent was “irrelevant”, the irate staffers wrote in the letter, adding that the paper’s own harassment training “makes clear what matters is how an act makes the victims feel. . .

That would seem to settle the issue as far as the New York Times is concerned. It is the reaction that is important, not the intent of how the n-word is used.  Ergo the NYT should never, ever allow that word to be printed, for its usage in print will certainly offend some people. (Remember, too, that McNeil used the word verbally, in a question, and did not print it 34 times!).

I guess, though, that the paper has rethought its stance. Apparently intent DOES matter now, at least in the Times‘s explanation of why it decided to publish McWhorter’s piece including multiple instances of the n-word. Click on the screenshot below (the link appears in the header of McWhorter’s piece):

The NYT’s explanation (there’s more in the short piece):

McWhorter’s piece is about the word itself — its etymology, sound and spelling. Using asterisks or dashes to veil the word would render this discussion incomprehensible, as would using a phrase like “the N-word.” Employing that phrase as a stand-in would also make the essay hard to follow, since part of the article concerns the distinction between the use of “the N-word” and the slur itself. So we came to the conclusion that printing the word was the right solution.

McWhorter’s argument has implications that go well beyond linguistic curiosity. As he writes, “What a society considers profane reveals what it believes to be sacrosanct: The emerging taboo on slurs reveals the value our culture places — if not consistently — on respect for subgroups of people.”

Tracing the evolving use of this slur and the controversy it engenders — even within The Times — shows us how our society and what it respects have changed.

The first paragraph is bogus; I replaced every use of the full word in McWhorter’s essay with either “the n-word” or “n—-r”, and it did not make the essay any harder to read.

The second two paragraphs totally undercut editor Baquet’s earlier statement that “We do not tolerate racist language regardless of intent.” Well, apparently they do, at least in an erudite essay by a black linguist.

Don’t get me wrong: I think McWhorter’s essay was readable and enlightening, and the recent transposition between slurs and profanity is a good point. There was no reason for him to have to use the euphemism “the n-word” instead of spelling it out.  What I object to is the hypocrisy of the NYT in saying that they won’t publish any “racist language regardless of intent”, and then backing off in this essay. As Greg asked me when he sent me these links, “How does Dean Baquet live with himself?”

Update by Greg: Reason’s media critic Jacob Sullum has also noticed the Times’ apparent inconsistency, in a piece entitled “At The New York Times, Intent Does Not Matter When Someone Uses ‘the N-Word,’ Except When It Does”. He noted a number of recent mentions of the word in the Times:

Other recent contexts in which the Times thought printing nigger was acceptable include movie dialogue (March 2021), a Frederick Douglass quotation (February 2021), an essay about the 1921 Tulsa Race Massacre (December 2020), a David Dinkins obituary (November 2020), a review of Barack Obama’s book A Promised Land (November 2020), a news analysis comparing Donald Trump to George Wallace (July 2020), and an essay on police reform (June 2020). Yet the paper’s executive editor, in explaining why McNeil had to go, claimed “we do not tolerate racist language regardless of intent.” If there is any sensible or even consistent standard at work here, it is pretty hard to discern.

44 thoughts on “John McWhorter, the “n word”, and the odious hypocrisy of the New York Times”