I’m now in Johnson City, Texas, named after an uncle of Lyndon Baines Johnson, who of course made the city famous. His “Western White House” was here, and here is where he retired, died, and is buried. It’s a tiny town (population less than 2,000), but one redolent with history. Who can hear of the Pedernales River without thinking of LBJ?

I will spend tomorrow visiting his childhood haunts, the LBJ Visitor’s Center, and perhaps, if it’s open, I can drive through the grounds of LBJ’s Western White House (visitors are no longer allowed to tour the house itself).

This is Hill Country, more famous for chicken-fried steaks than BBQed brisket, and so I may spend a few days essaying the region’s famed dish.

But first my report from Taylor, Texas, the home of famed Louie Mueller BBQ. The restaurant is well aware of its renown; atop its webpage you see this:

As you’ll see, both assertions are correct, at least in my view.

Taylor has a population of 15,000, and, like Elgin, is a town where many B movies were filmed.

I checked into a cheap motel on Thursday and immediately went downtown just to locate Mueller’s, as I planned to visit it when it opened at 11 Friday morning. This Apotheosis of Smoke opens at 11 a.m. six days a week—this is religious Texas, and most places close on Sundays—and stays open until it runs out of barbecue. They told me yesterday that that’s usually around 3 p.m. 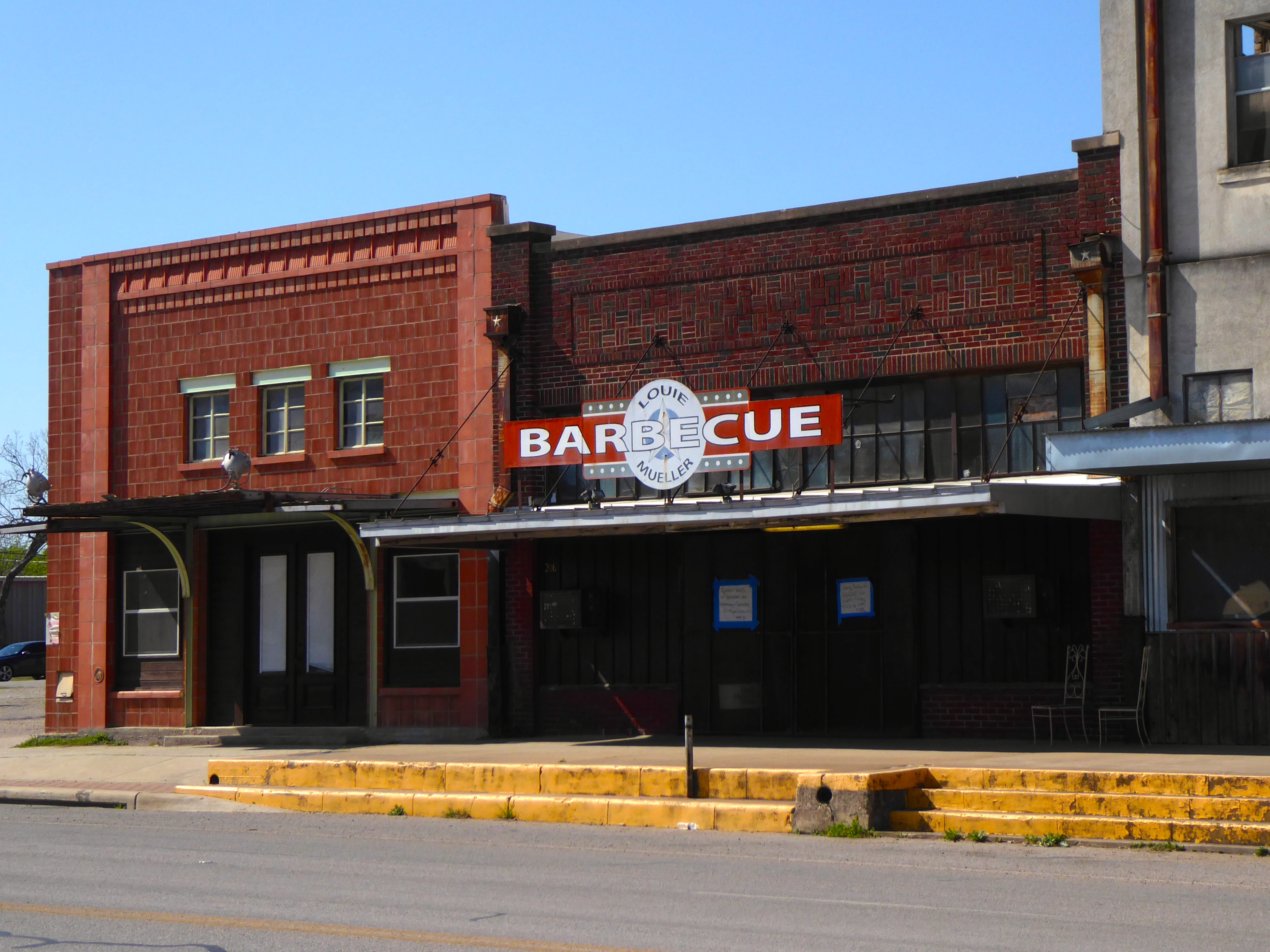 Sure enough, when I dropped by at 4 p.m. Thursday, this sign was on the door. But no mind: I was coming the next day anyway. 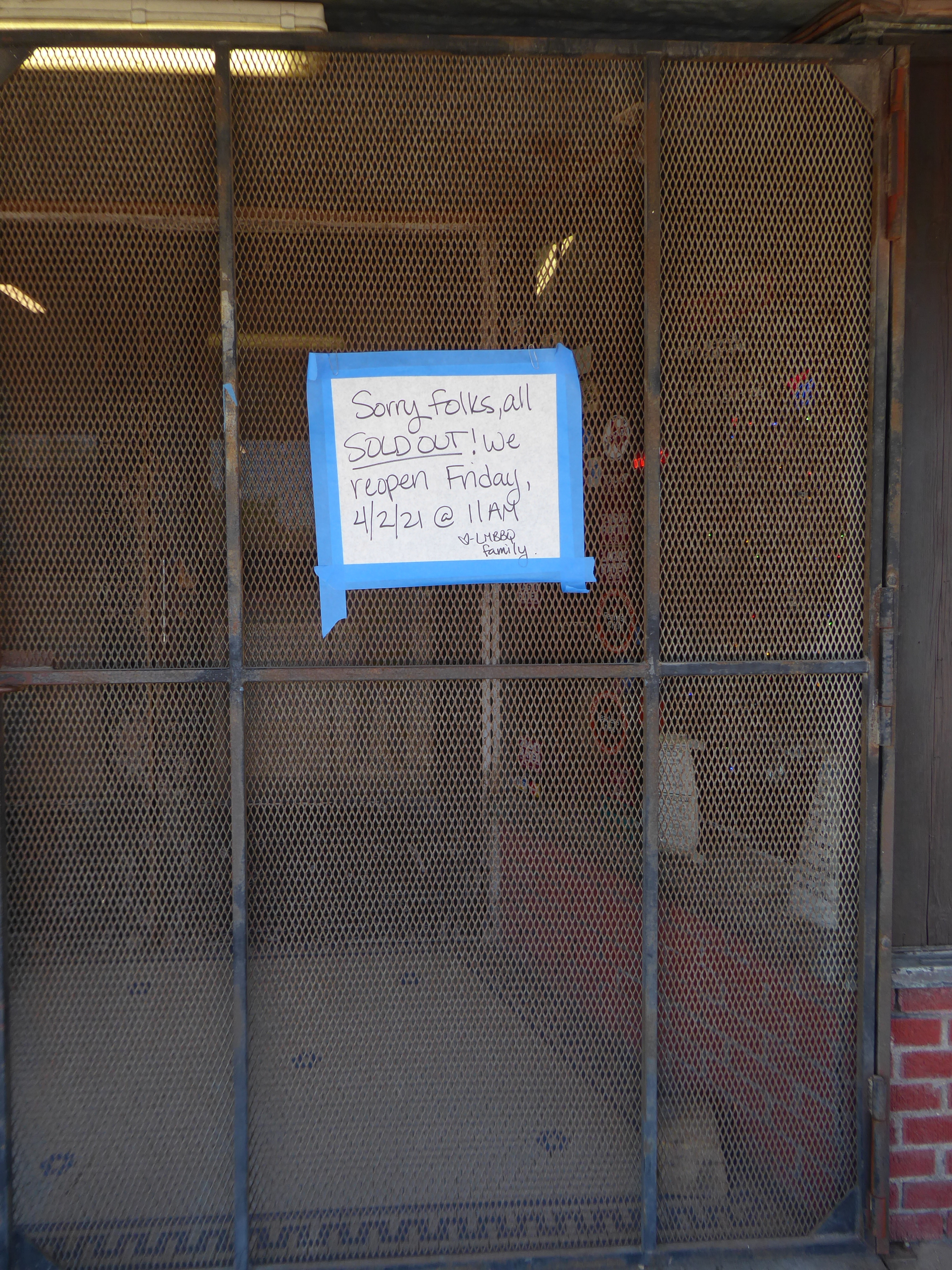 There was also this cheerful sign in another window: 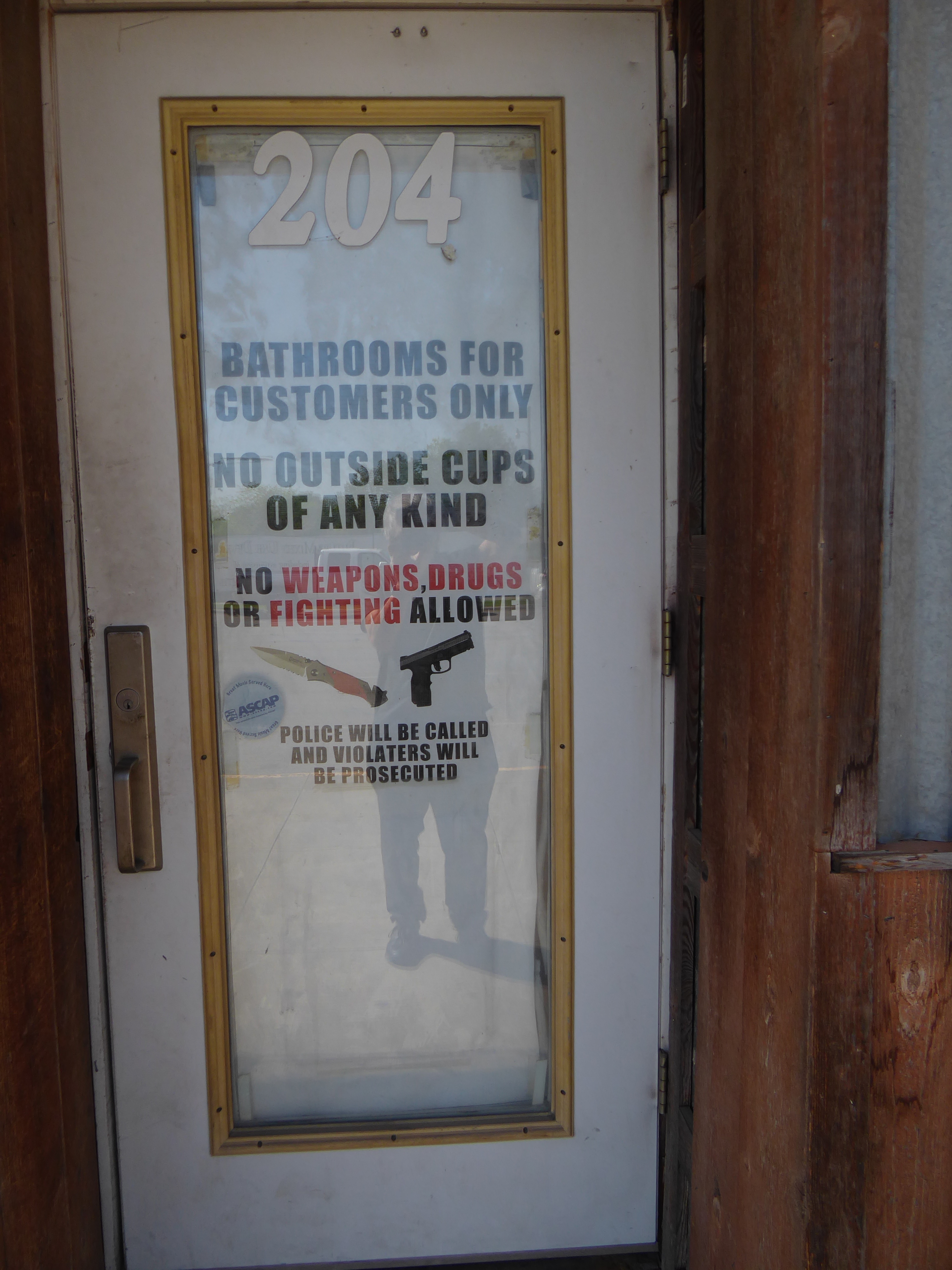 I had a ramble around downtown Taylor, which, like many dying Texas towns, consists of a central city (I couldn’t find the courthouse) with little streets lined with old buildings containing local shops. Taylor also had two pianos on the sidewalk for people to play as they will. This one even had sheet music, and bust my britches if one of the pieces of sheet music wasn’t “Behind Closed Doors” by Charlie Rich, one of my favorite country songs. 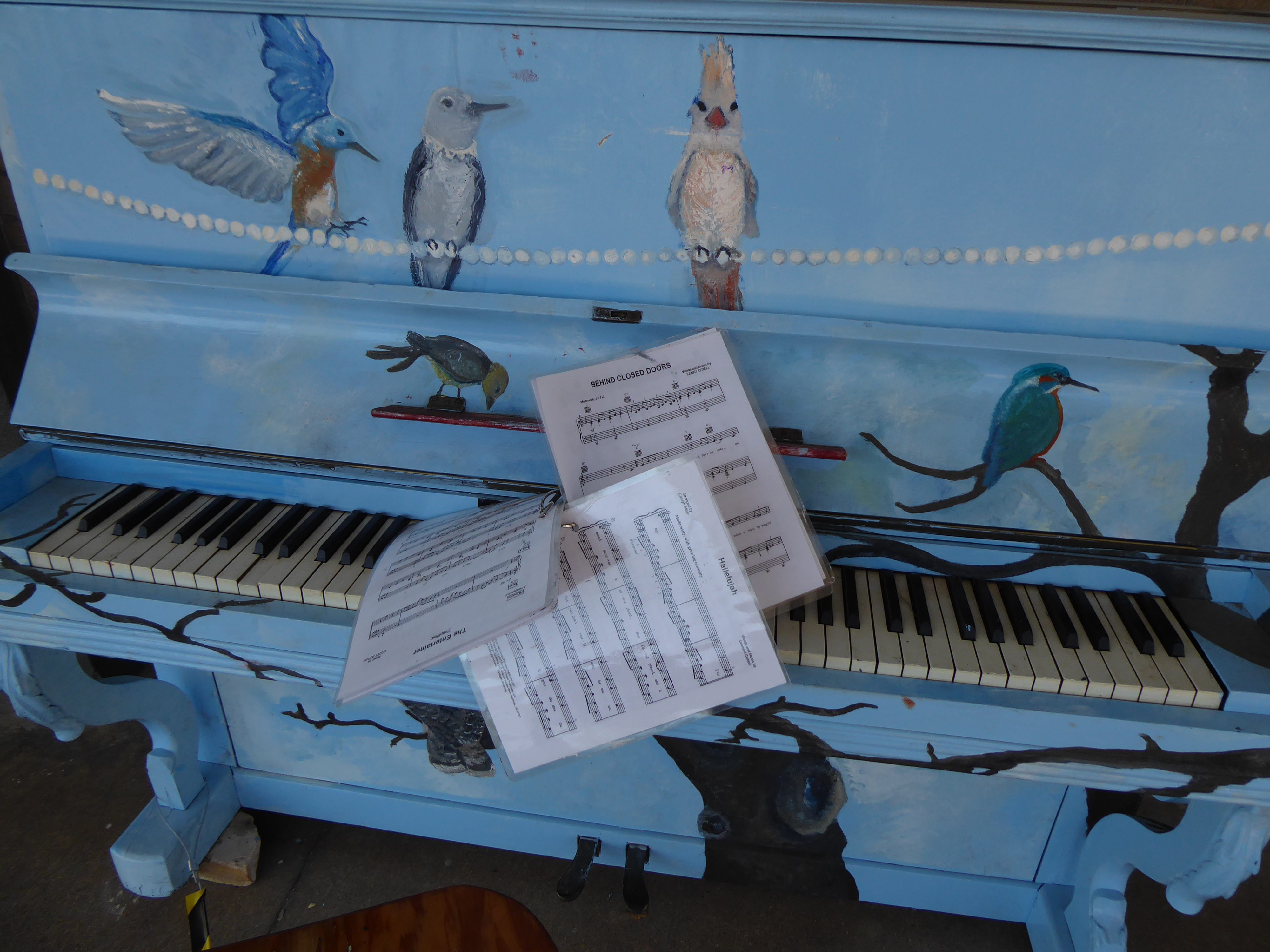 And here’s a statue of Bill Pickett, who was, as the plaque says, “The Father of Bulldogging.” What’s that, you wonder? It’s wrestling steers, which, as Wikipedia describes:

. . . is a rodeo event in which a horse-mounted rider chases a steer, drops from the horse to the steer, then wrestles the steer to the ground by grabbing its horns and pulling it off-balance so that it falls to the ground. The event carries a high risk of injury to the cowboy. 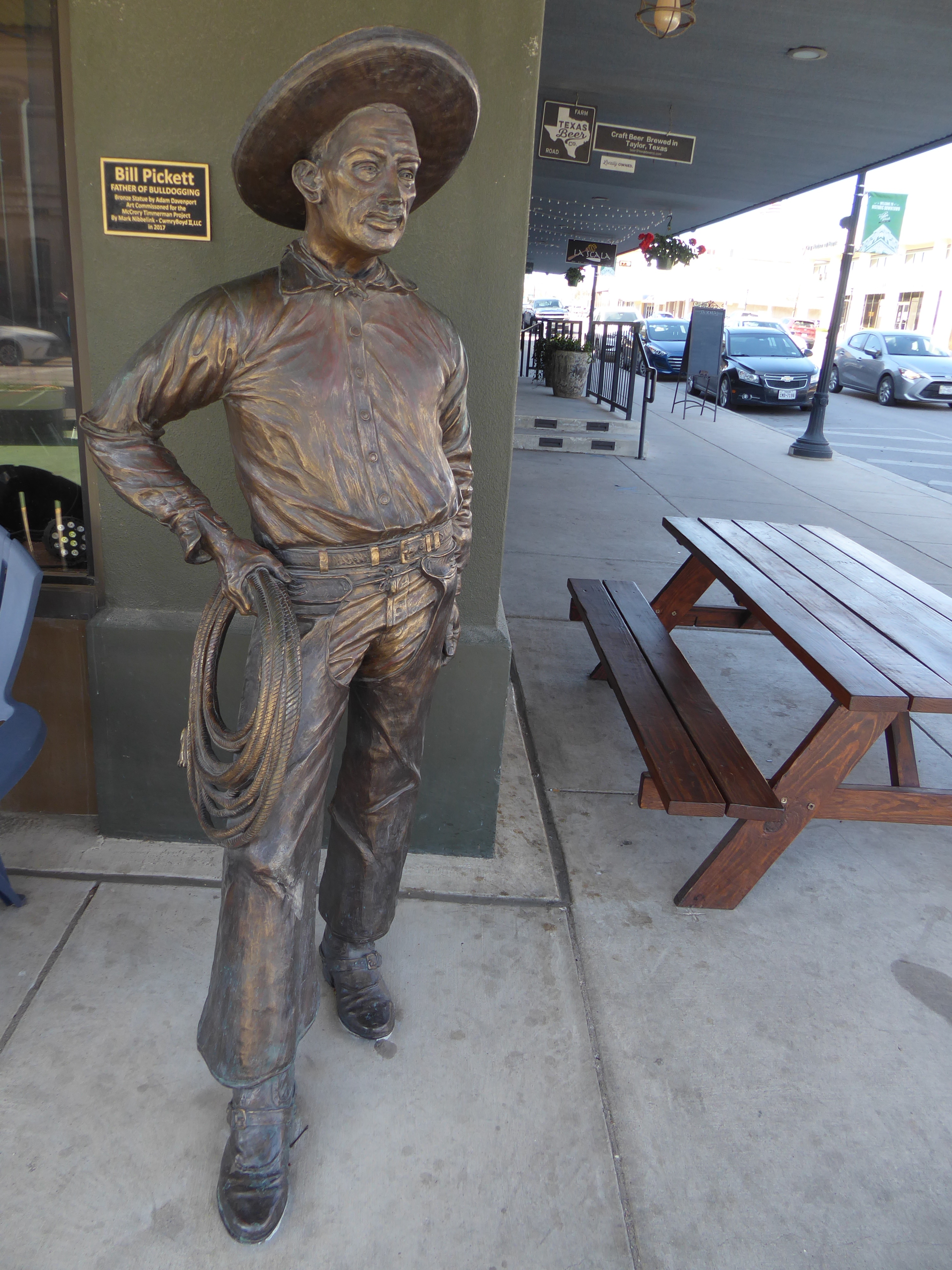 You can see a video of bulldogging here.  Pickett has a fascinating biography on Wikipedia. He was born in 1870, the son of a slave, and had African and Cherokee ancestry. He lived for a while in Taylor, and actually invented the sport of steer wrestling. 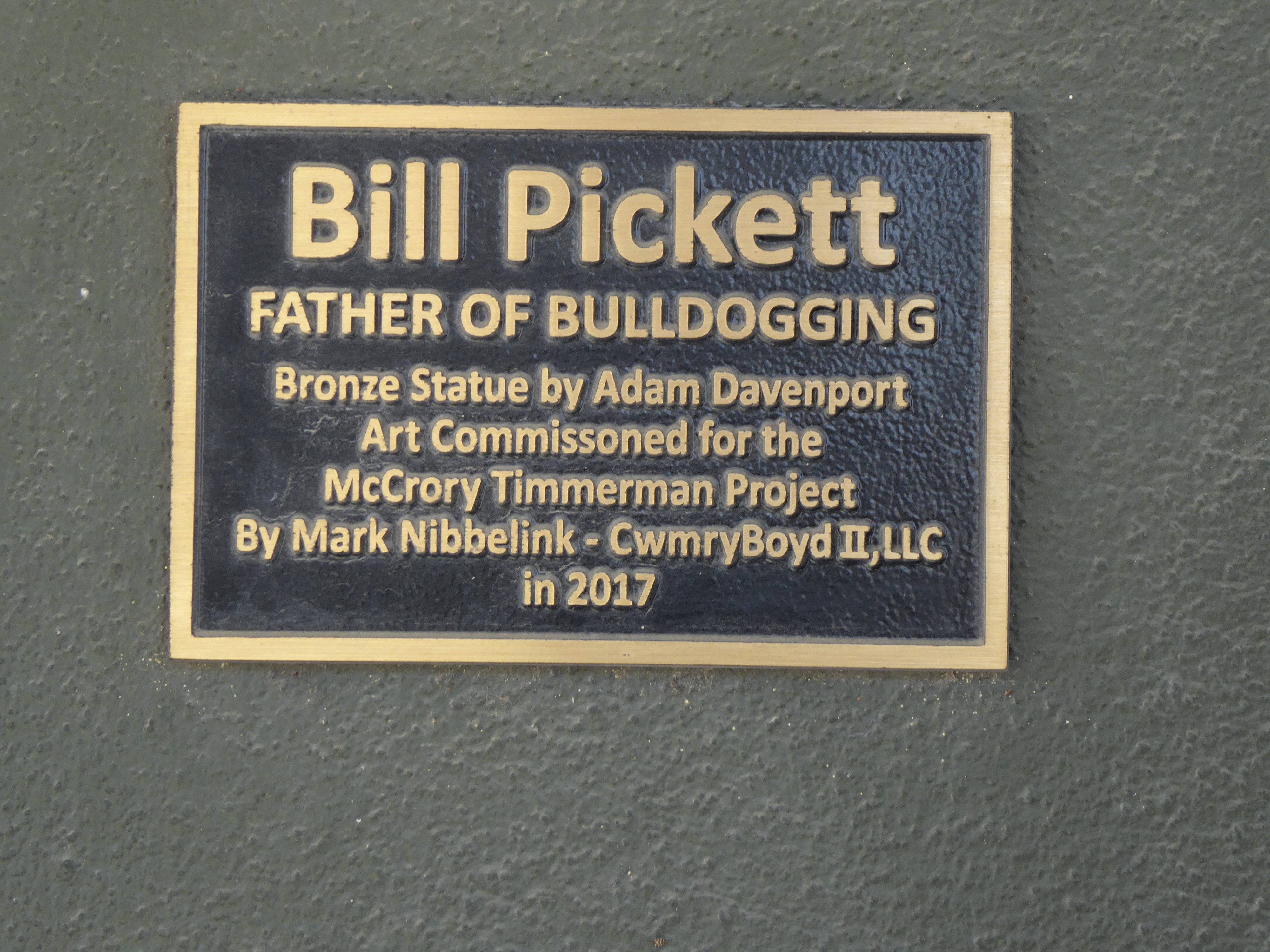 Taylor died in 1932 after being kicked in the head by a bronco. Here’s a photo of him, probably the model for the statue above: 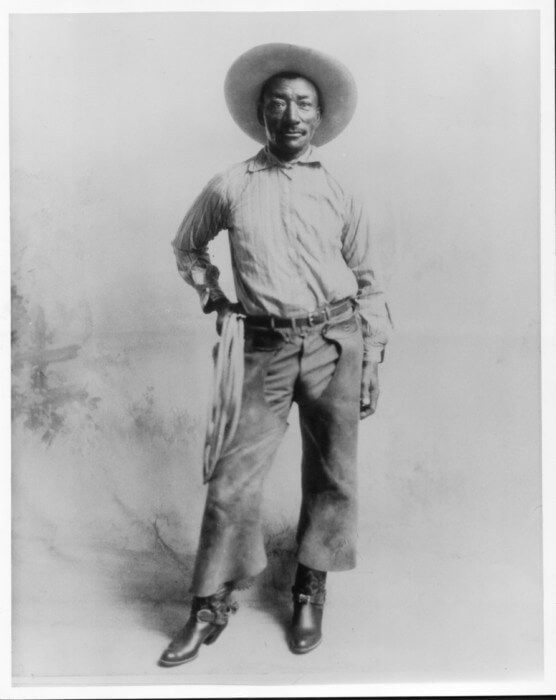 Here’s a defunct BBQ in town. This is what happens if you produce inferior brisket: 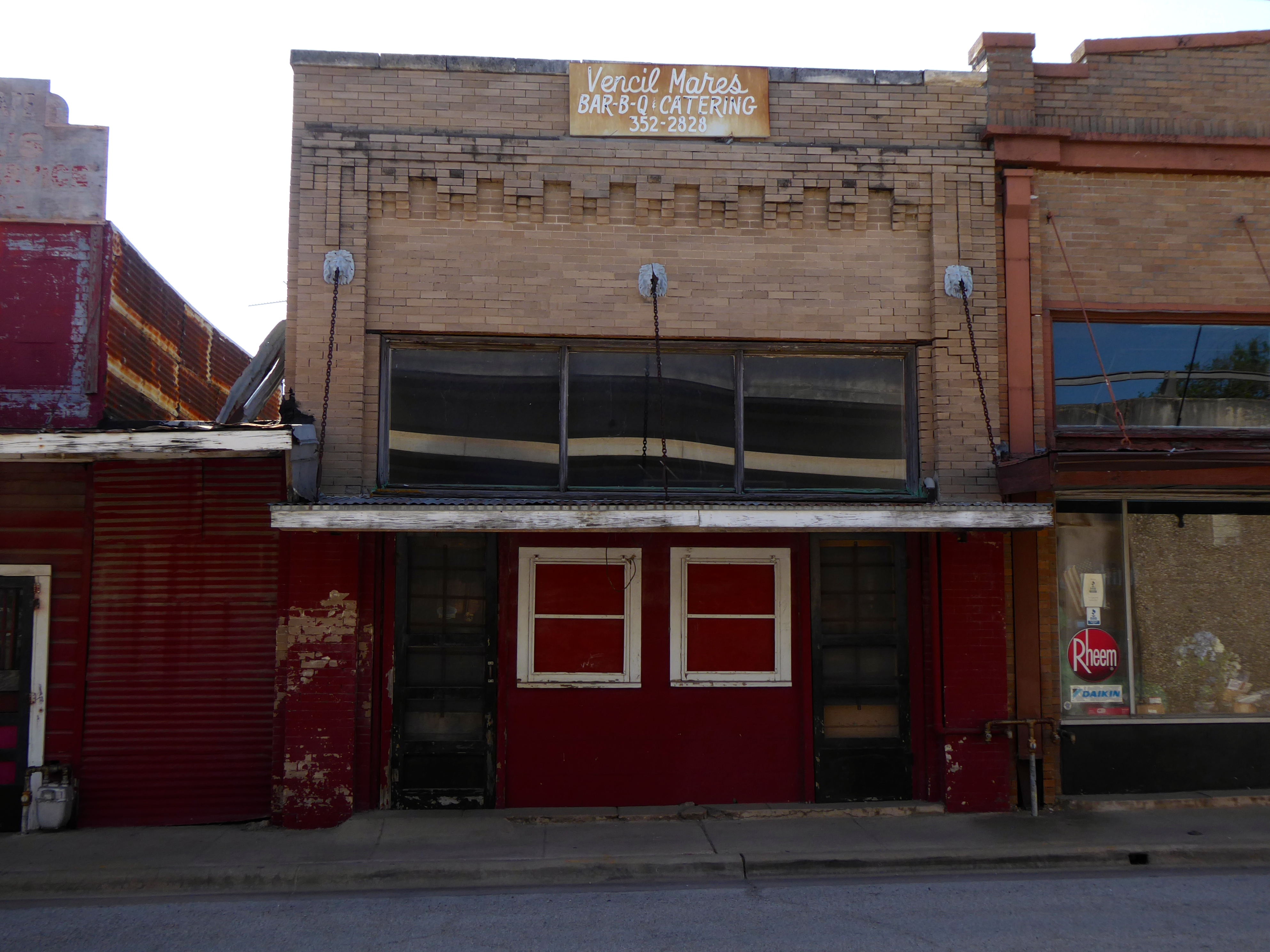 This was in a store nearby. Why, though, do ranchers want cedar stumps? 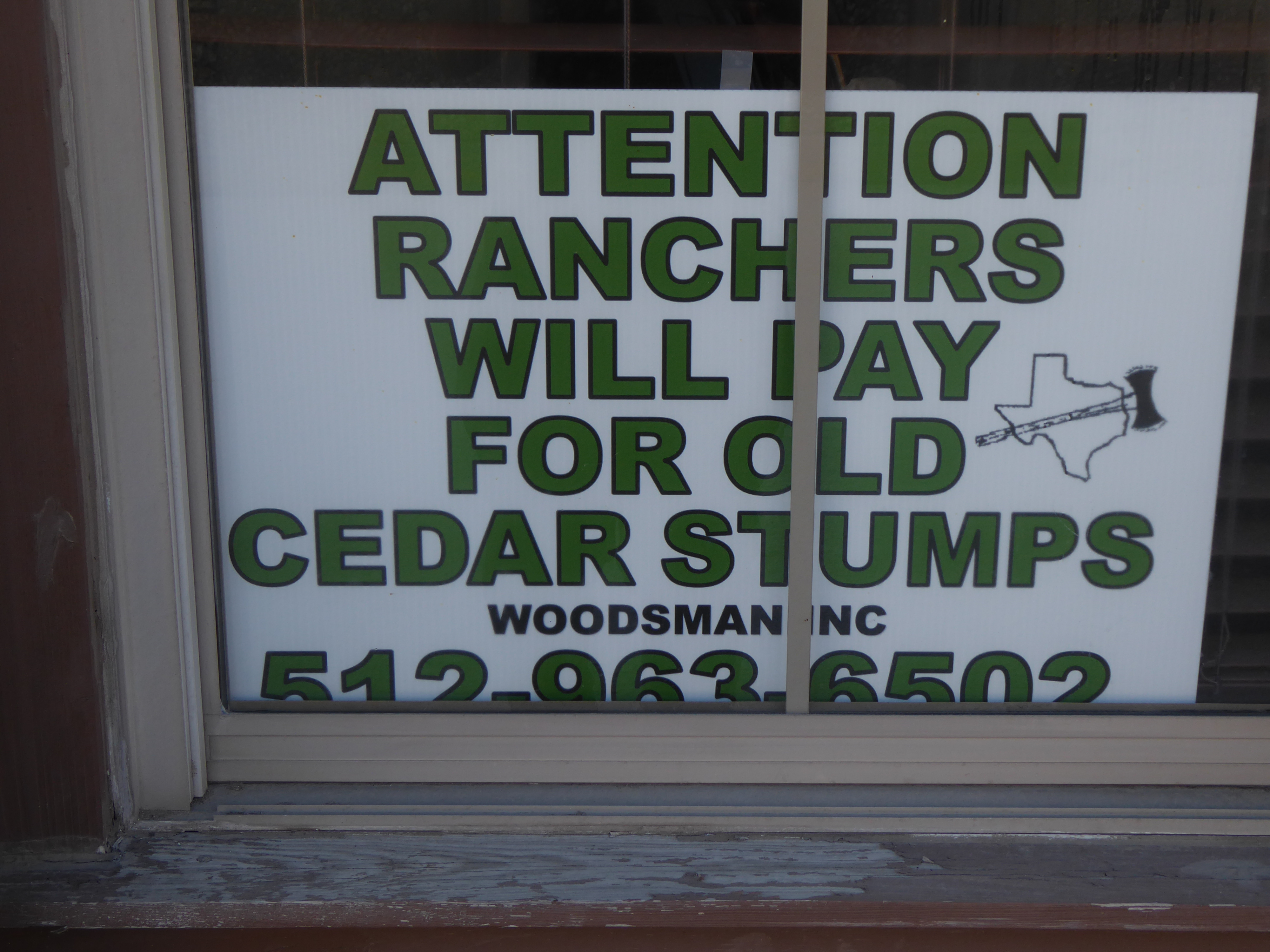 Elsewhere in town I found the Lucky Duck Cafe 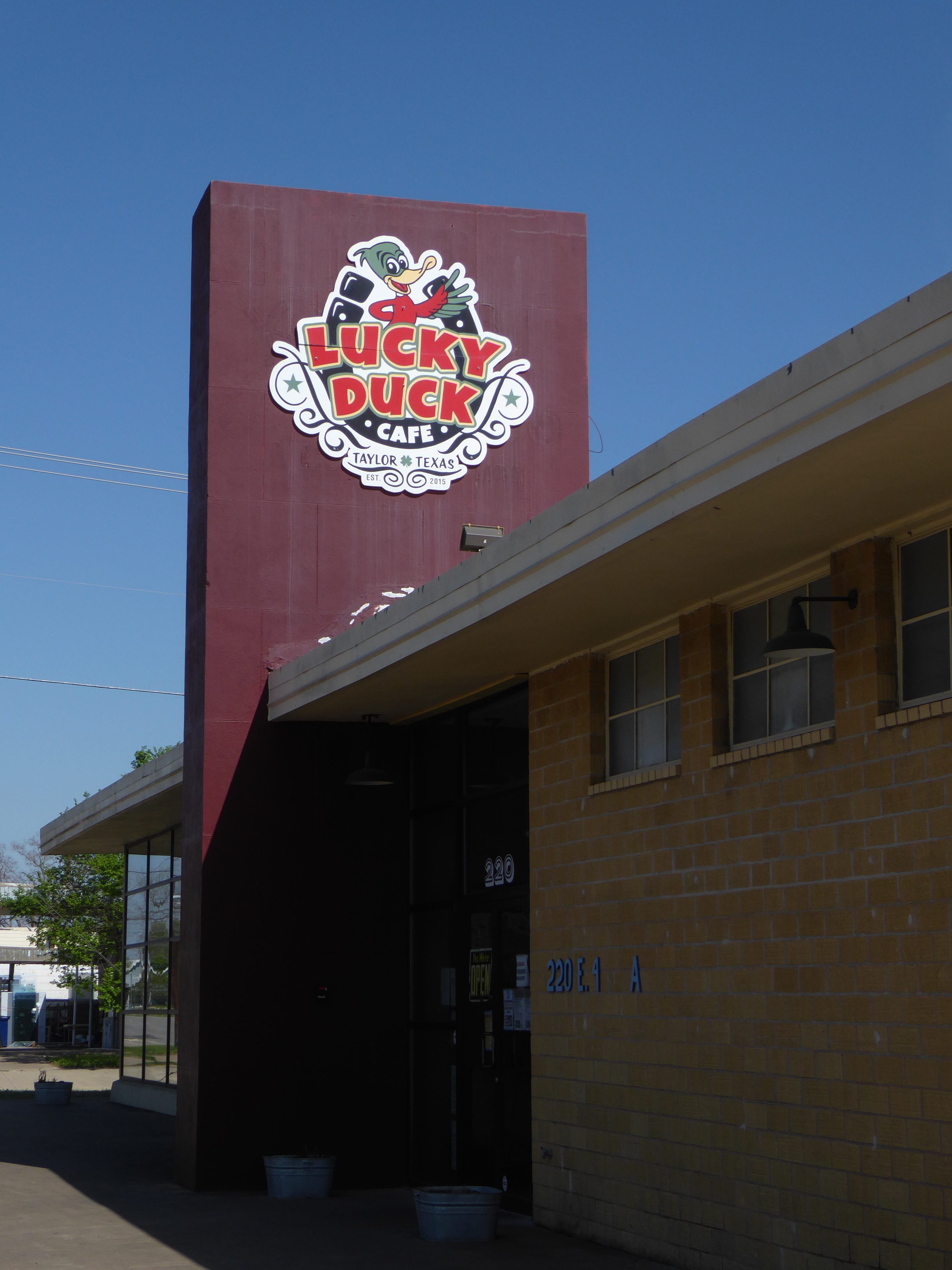 Jane and Michael Stern, whose many books about eating on the road got me hooked, have this to say about Mueller’s brisket:

Several years ago, Louie Mueller added a new, modern dining room that lacks the smoky patina of the old brick-walled restaurant; but no matter where you eat in this venerable BBQ, the flavor is historic. Here is a restaurant where beef is cooked and served the way pitmasters have been doing it for decades in this part of Texas. Step up to the counter behind which you have a view of the old smoke pits. Order your meat by the pound or plate. It is presented on a serving tray, which you carry to a table.

The brisket is a thing of beauty. It is sliced relatively thick, each individual slice halved by the ribbon of fat that runs through a brisket, separating the leaner, denser meat below from the more marbled stuff on top. This is the Platonic Ideal of Texas BBQ.

What’s the secret? There isn’t one. Wayne Mueller, Louie’s grandson, and now master of the BBQ domain, told us that no spices go into or onto his briskets other than salt and pepper. Add time and smoke to those two elements, plus a pitmaster who knows how to move the meat around in the pit to take maximum advantage of hot spots, cool spots, and drafts, and the result is beef that is impossibly juicy and huge-flavored.

Everybody knows about Louie Mueller’s reputation, and that’s why—aside from Franklin’s BBQ in Austin—it’s the most crowded BBQ joint I know of. There was a line of ten people at 10:45 when I arrived, and it was much longer by the time the doors opened. When I left at noon, the line was out the door. Many people were taking out huge orders for groups; perhaps some had come from nearby Austin.

I asked the woman at the counter if there was always a line, and she said yes, and it was much longer on Saturdays! I also inquired about when they put the briskets on to smoke, and she asked a man who I believe was Wayne Mueller, the grandson of Louie and the pitmaster. He said they start the smoking at 4 a.m., so they’ve been smoking for 7 hours when the restaurant opens. (They are cooked not with direct heat, but with smoke.) 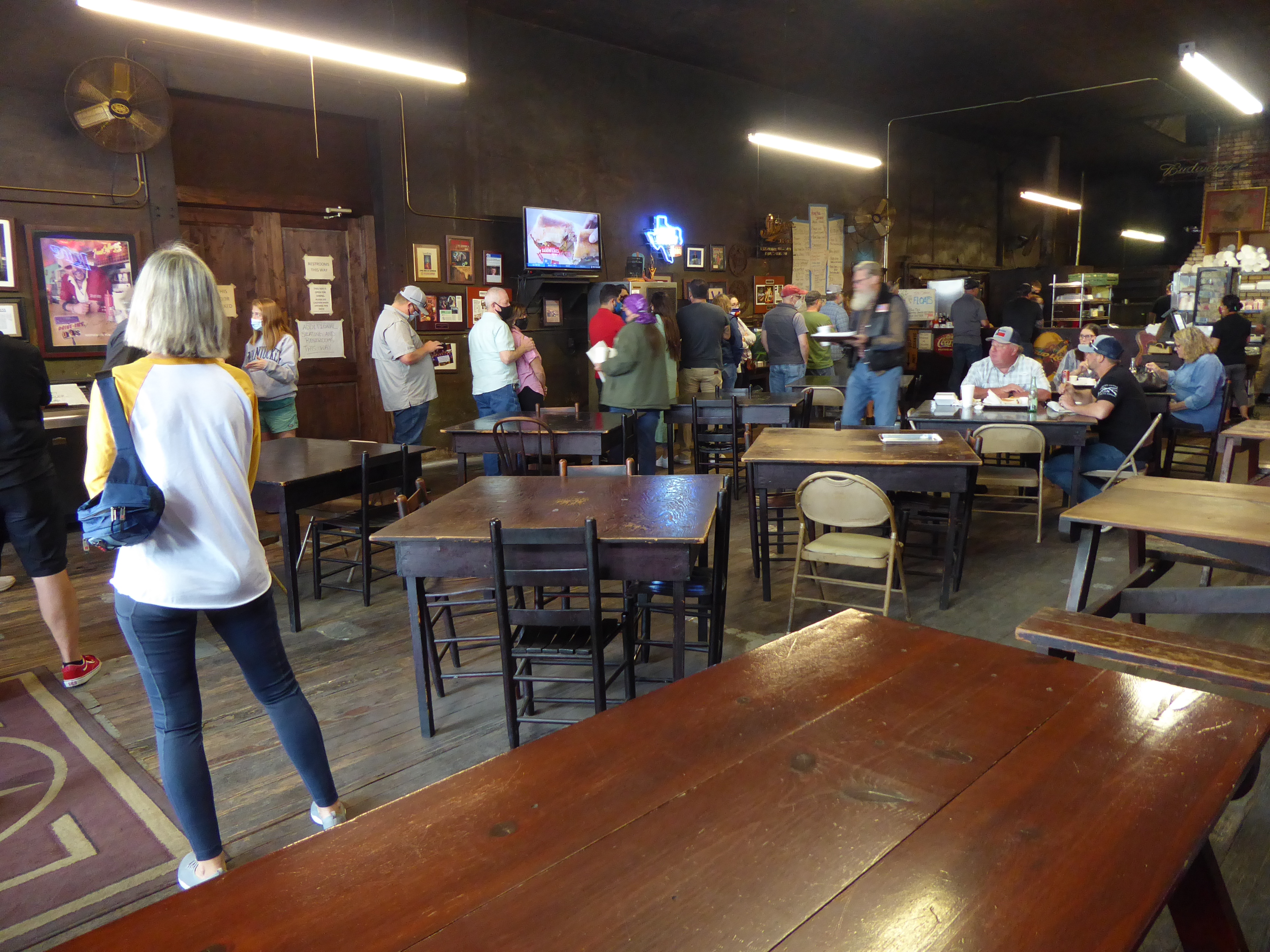 A Beard Foundation award (one of many encomia for this place) hangs on the wall. 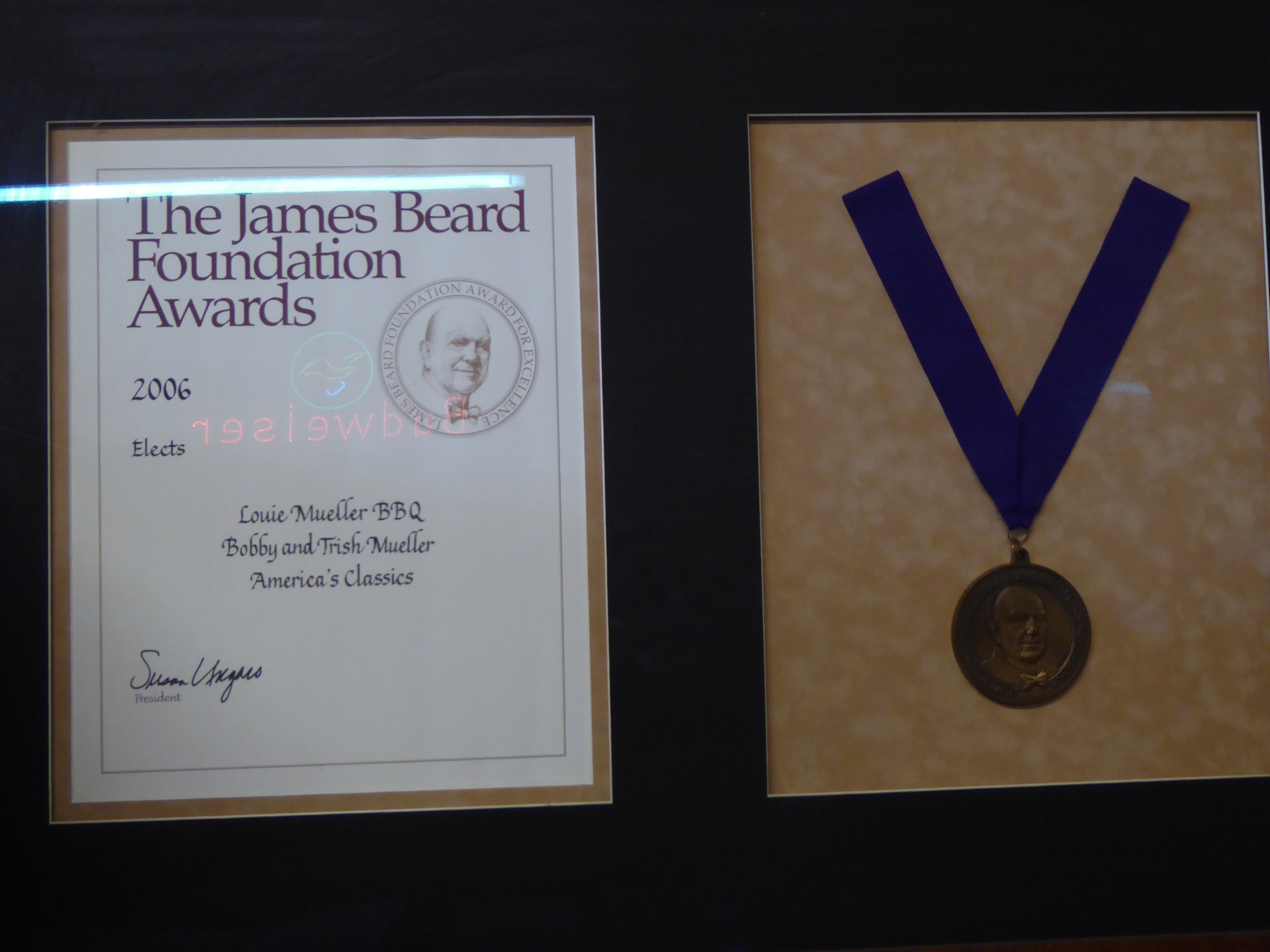 Below: the handwritten menu. They didn’t have BBQ plates, so after some exchange with the counter woman, I got three slices of juicy (i.e., fatty) brisket, a regular sausage, onions, pickles, and sides of potato salad and pinto beans, along with two slice of white bread and sweet tea. (Sound familiar?) That was about $23–expensive for a BBQ joint.

As you see, their brisket is $28 per pound, the most expensive I’ve seen yet (it usually ranges between $13 and $18 per pound).

But it was worth it. 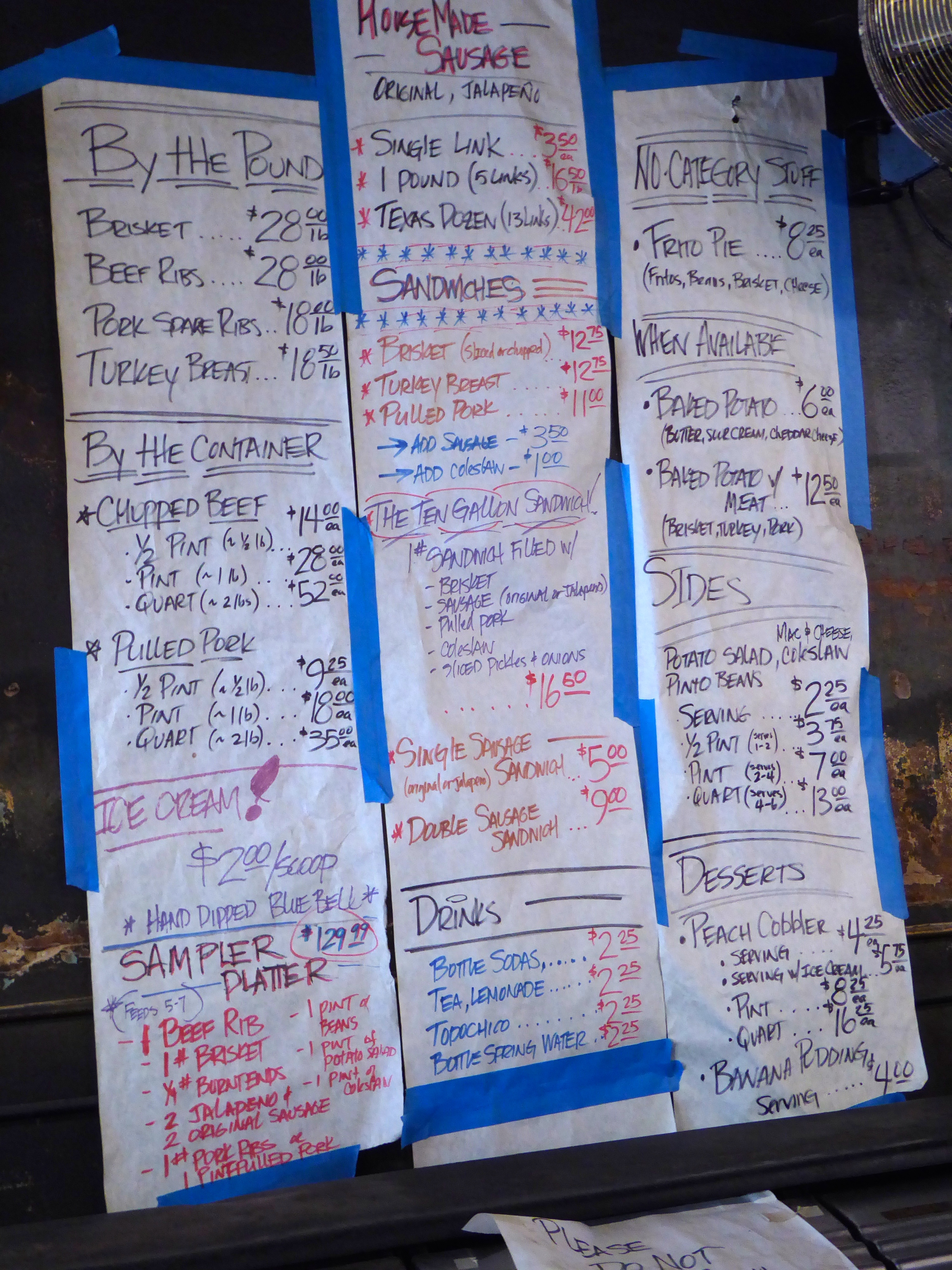 Here is my plate, and every item save the beans was the best examplar I’ve had in Texas. The potato salad was copious and creamy, and the sausage, in a natural casing, snapped when I bit into it and then released a flood of juice. It was fabulous: meaty, spicy, and smoky. It’s the best Texas smoked sausage I’ve had by far. 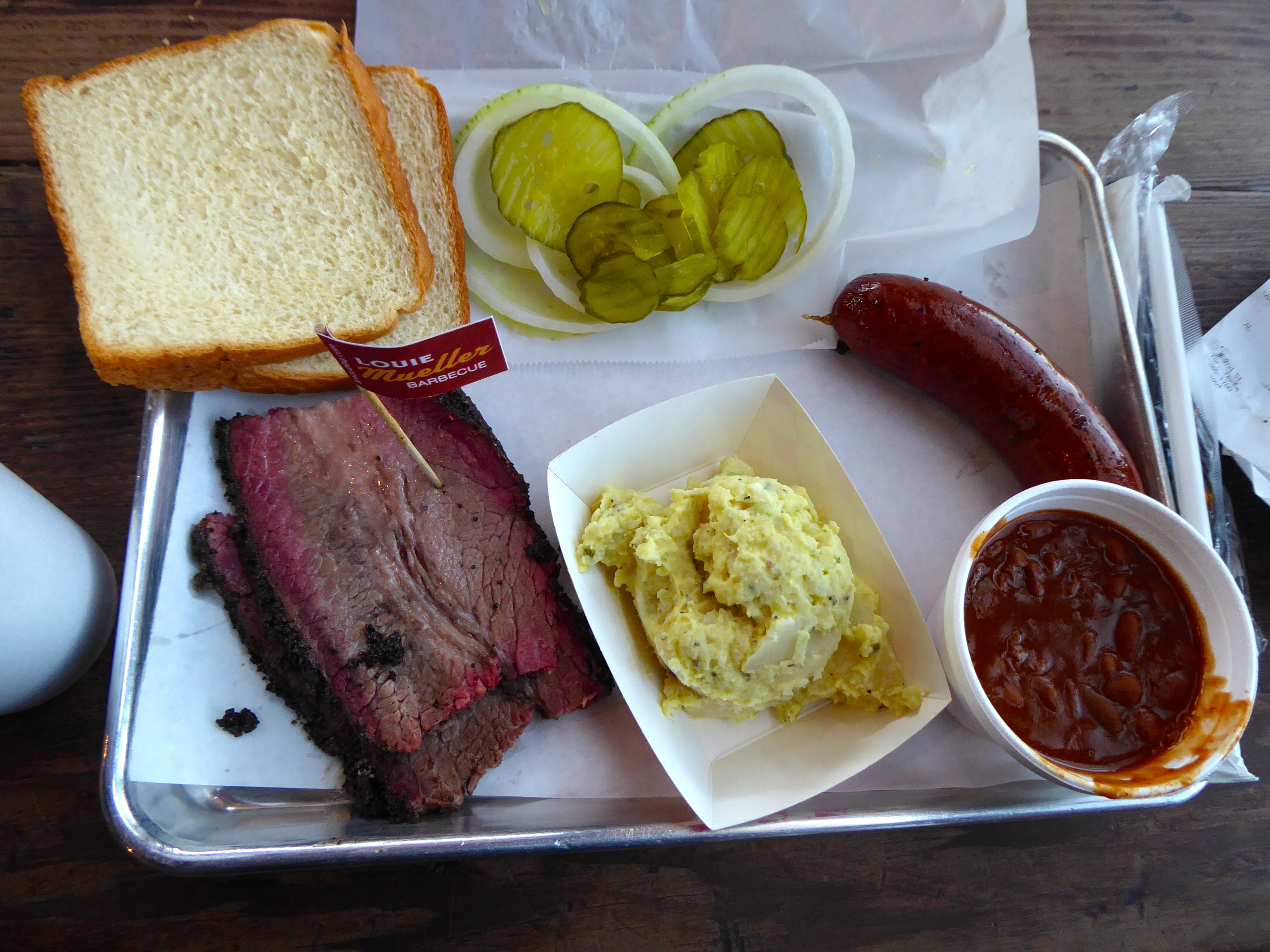 And oy, the brisket! Here’s a close-up view showing the char on the outside, the red “smoke layer,” and the meat itself, with the entire slice bisected by a ribbon of succulent fat. It was, well, ethereal. No sauce needed: the smoke, beef, and salt melded in a gastronomic epiphany. I sat there at the table and ate very slowly, savoring every bite.

I have had brisket all over Texas, including this trip, and BBQ all over America. And right now I can say that Louie Muller, as its website advertises, is the best BBQ brisket in Texas, ergo the best BBQ in America. I’ll add that I’ve never had a smoked sausage as good either, even at the famed Southside Market where I ate on Thursday.

Ladies and gentleman, brothers and sisters, and comrades, if you are near Austin, get yourself to Louie Mueller’s (preferably before noon and not on a Saturday) and be prepared to enjoy the best barbecue in America. (Right now the City Market in Luling, my old favorite, has slipped a notch to the #2 spot.) 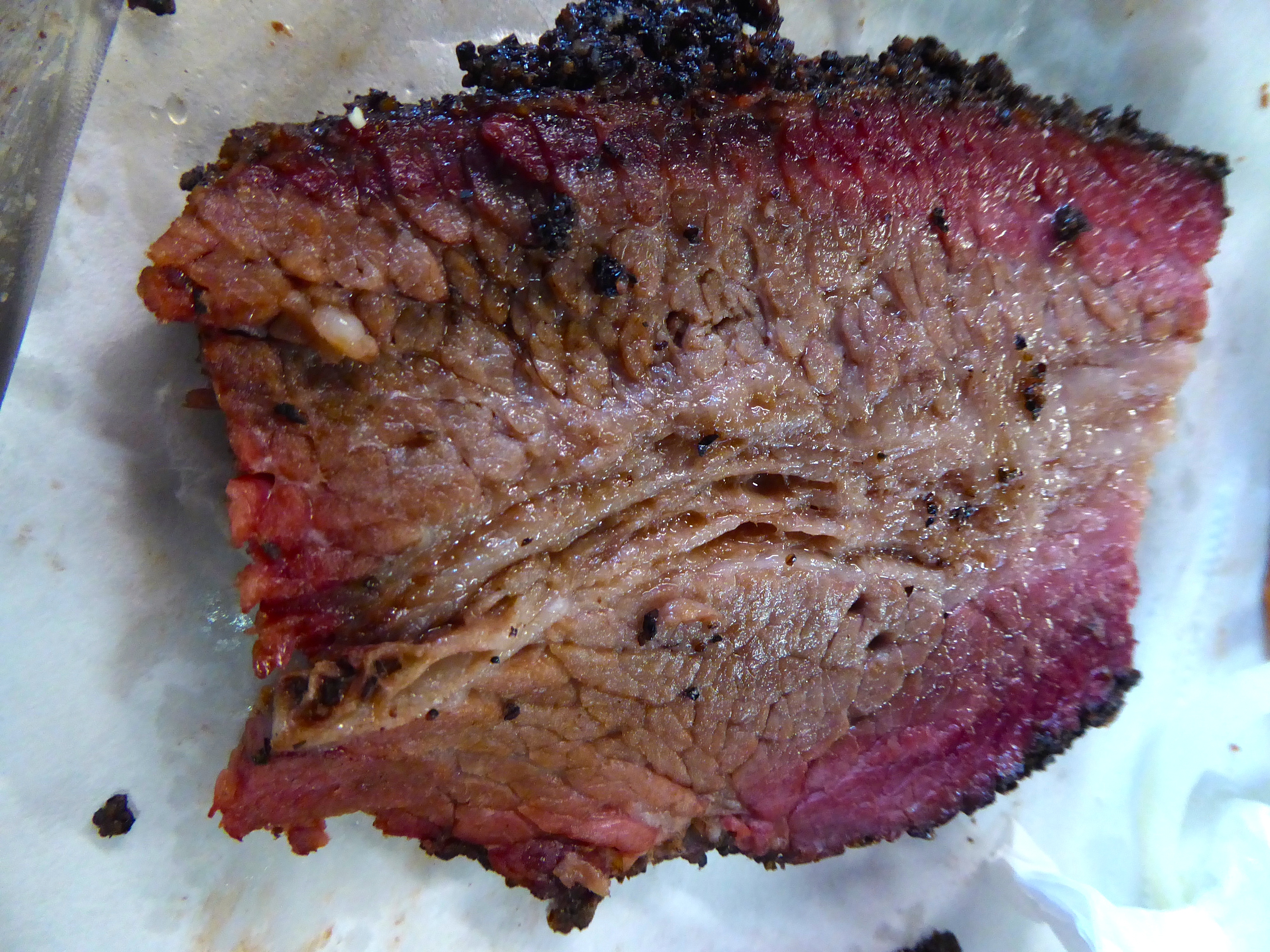