For a while, NYT columnist Bret Stephens has had, as the saying goes, “One foot on a banana peel and the other in the grave.” The banana peel is his columns, which are not only semi-conservative in politics, but also against the policies of the paper itself. (For example, Stephens wrote a column criticizing Dean Baquet’s views on the n-word, with Baquet arguing that uttering the word in any circumstance was a grave journalistic misstep, and “intent didn’t matter”.  Stephens’s column got spiked and then was published in The New York Post.) At the time I wrote that Stephens was “bucking for a pink slip” from his newspaper. The pink slip (or a resignation) is the grave.

That pink slip is closer to arrival now that Stephens has published another contrarian column in his paper.  In this case he will anger his editors in three ways:

a. Stephens calls out the ideological bias of casting the Atlanta spa murders as Asian “hate crimes,” saying that there’s no evidence for that. While that’s true, and while federal prosecutors have so far seen no evidence for a “hate” charge, this doesn’t matter. All the protestors seem to already know the motive. It’s a sign of the times that saying we need more evidence for such a motivation, especially when there is none, is regarded as a racist view.

b. Stephens goes against the way his own paper, as well as others, have reported on the crime, emphasizing over and over again its roots in hatred of Asians. While this is likely true for other attacks on Asians, it may well not be true for the mass shooting in Atlanta. As Andrew Sullivan wrote of the NYT last Friday,

Accompanying one original piece on the known facts, the NYT ran nine — nine! — separate stories about the incident as part of the narrative that this was an anti-Asian hate crime, fueled by white supremacy and/or misogyny.

I believe the count is now closer to a dozen. Stephens, of course, won’t mention this, as they’d either spike the column or make him leave that out.

c. Stephens notes that many (I estimate at least half, though the media tends to hide this fact) of the recent assaults on Asians were done by people of color, mostly African-Americans (see some data below). This goes against the Critical Race Theory view that now dominates the New York Times.

How long will Stephens be allowed to stay on? (I suspect he’s already a pariah in the newsroom.) And will he move to Substack, the refuge for journalists expelled by the Woke? We shall see. It would be odd of the paper didn’t have any  conservative columnists, though!

Click on the screenshot to read the piece; it’s not long. 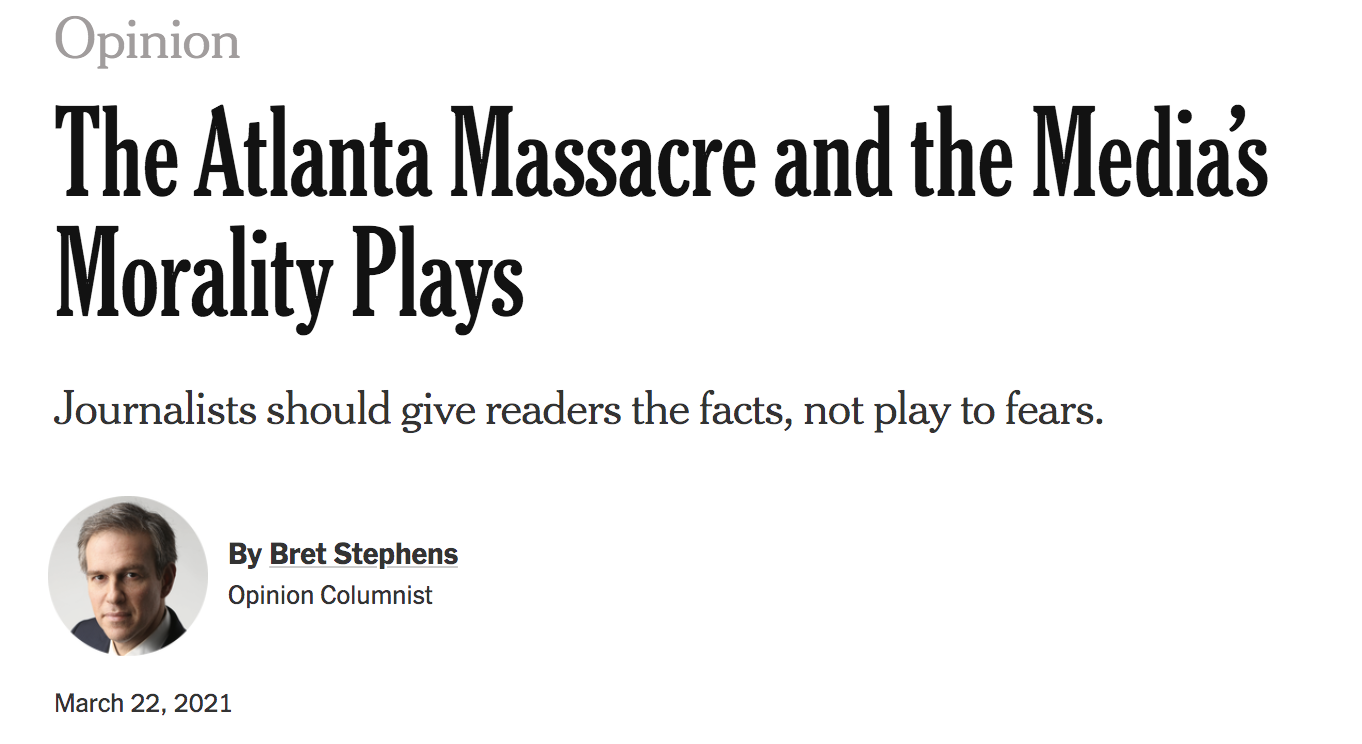 And here’s what he says about a) and c), though he doesn’t go after his paper explicitly:

And the motive, while still requiring scrutiny, is confessed: The killer claims to have been struggling with a sex addiction at odds with his evangelical beliefs. According to The Associated Press, “All three businesses where people were fatally shot Tuesday have detailed recent reviews on an online site that leads users to places that provide sexual services.”

So how do we get headlines like “The Atlanta Spa Shootings and the Year of Hatred Against Asian Americans” on a news story from U.S. News & World Report? And why has reporting of the incident by so many news outlets emphasized the race of six of the victims when there is, as yet, only one rumored bit of evidence (in a South Korean newspaper) that the victims were attacked on account of their race?

The reason is that we have two things that, separately, are important and true, but that are being dubiously conjoined for reasons of ideological convenience.

The two things are:

2.) Donald Trump “stoked anti-immgrant hatreds that very likely contributed to the 2018 massacre at the Tree of Life synagogue in Pittsburgh and the 2019 massacre at a Walmart in El Paso.” And don’t forget his incessant references to the “China virus” and the “Kung Flu.”

And Stephen’s lesson, which will irritate his editors most:

But if the news media should have learned one thing over the past 20 years, it’s to be exceptionally wary of trying to map one truth onto another for the sake of a compelling narrative.

. . . Now we have a rising rate of anti-Asian hate crimes, and a horrific crime in which the perpetrator is white and most of his victims were of Asian descent (although two were white). The powerful ideological temptation is to treat this as yet another shooting in the vein of Pittsburgh and El Paso — or, as one CNN headline put it, “White Supremacy and Hate Are Haunting Asian-Americans.”

Tempting — but mostly baseless. The same study that found last year’s rise in anti-Asian hate crimes also notes that the overall incidence of these crimes is relatively small, both in absolute numbers (122 incidents in 2020, out of a total of 1,717 hate crimes), and compared with other victimized groups. It should go without saying that one hate crime is one too many, but even though reports of these incidents may be a small fraction of the overall crimes, proportions matter.

And while data about the identity of perpetrators is hard to come by, the New York Police Department did keep tabs last year. It found that out of the 20 anti-Asian hate crimes in which arrests were made, two arrestees were white, five were white Hispanic, two were Black Hispanic, and the rest were Black.

Well, had I been Stephens, I would have left out the argument that the overall incidence of crimes is small, as it looks like an attempt to minimize something that angers a lot of people. Yes, it’s true that hate crimes occur less often than most people think, but that’s not all that relevant here. What is relevant is that more blacks than whites committed hate crimes against Asians, and that the proportion of blacks who commit hate crimes on Asians is twice their proportion in the population. This definitely contradicts the white supremacy trope wielded by CRT, and explains, I think, why it’s hard to find from news reports the ethnicity of those committing hate crimes on Asians.

As I wrote a few days ago:

Here’s some data from 2018 on the proportion of different groups who were subject to violent crime, and the ethnicities of the criminal. These were tweeted by Wilfred Reilly. Now the data are three years old, and don’t reflect the uptick in crimes on Asians that’s said to have occurred. At least back then, Asians were not predominantly assaulted by Whites, but Whites, Blacks, and other Asians assaulted Asians with roughly equal frequency.

In 2019, the total population percentage of these groups from Census statistics were:

Stephens does refer to hate crimes from 2020, but only in New York City:

And while data about the identity of perpetrators is hard to come by, the New York Police Department did keep tabs last year. It found that out of the 20 anti-Asian hate crimes in which arrests were made, two arrestees were white, five were white Hispanic, two were Black Hispanic, and the rest were Black.

What can one conclude from this limited data? Not a lot, except that the idea that white supremacy is what haunts Asian-Americans rests on empirically thin ice. Like so much else in public discourse today, it’s another capital-T ideological Truth in search of lower-case-t factual truths to validate its predetermined, overstretched hypotheses. That it has the laudable goal of “raising awareness” and “combating hate” does not relieve journalists of the responsibility to report facts scrupulously, not play to fears in the service of a higher good.

His indictment of journalism is, of course, an indictment of the New York Times as well, as is his last sentence, which he adds after saying that people also want to know how the perp was able to buy his gun on the day of the killing, how religious fanaticism can lead to such a killing, and why local authorities overlook the sex trade that goes on in spas.

All of this would be journalism in which the public could have confidence. Instead we have morality plays.

Here: we’ll have a poll.

42 thoughts on “Bret Stephens in the toaster”