Please send in your photos. I will probably put this feature on hold while I’m in Texas, but, except when I’m gone, the tank is always emptying.

Today’s photos come from regular Tony Eales, an anthropologist in Queensland who loves natural history. Tony’s captions and IDs are indented, and you can enlarge his photos by clicking on them.

Here are a few of the other wonderful organisms I encountered on my brief trip up north to the jungles.

Australian Prismatic Slug (Atopos cf australis). I’m pretty sure there are several species of this slug around, but they all seem to be labelled A. australis. They are predatory slusg with curved teeth in the radula, and they spit acid onto snail shells to help rasp through to the snail inside. 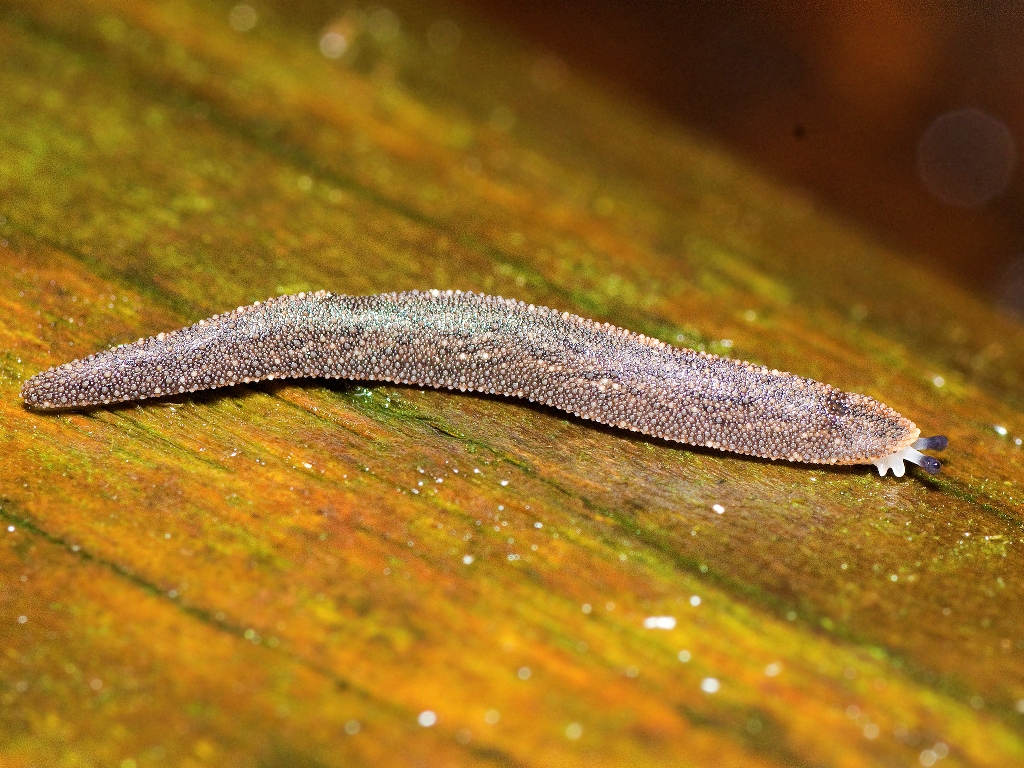 The tracks at Speewah Conservation Park were empty of other humans, which was great for spotting wildlife. I got to approach this Northern Tree Snake (Dendrelaphis calligaster) quite closely without alarming it too much. It’s a slightly built rear-fanged colubrid and presents no danger to humans. 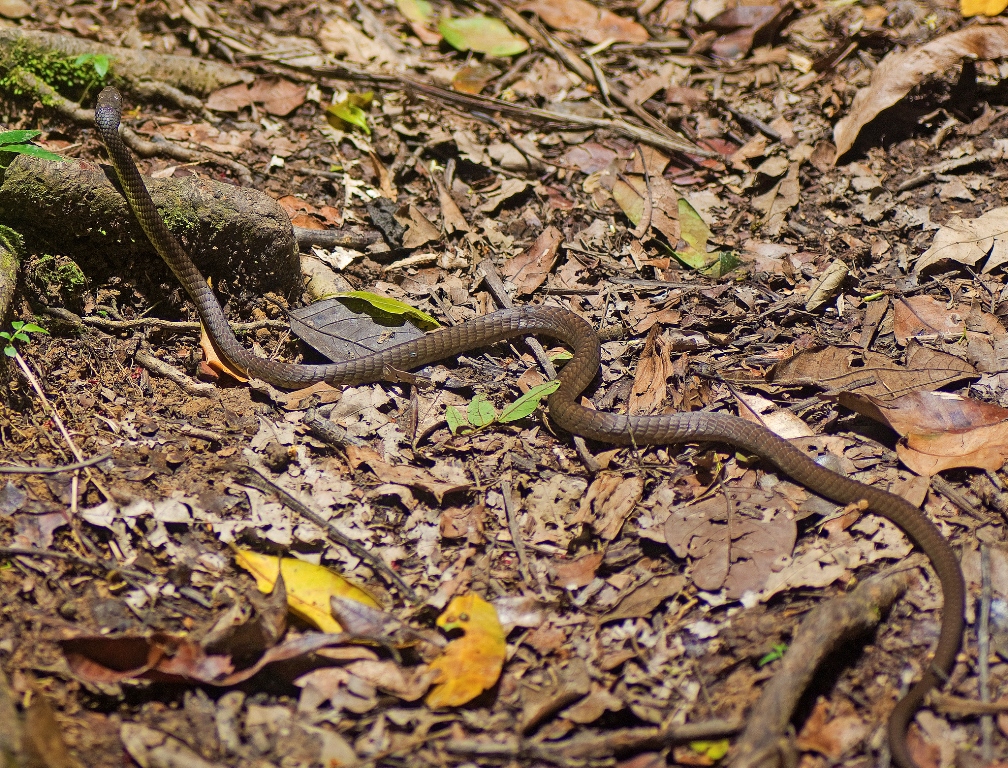 These beautiful Tropical Rockmasters (Diphlebia euphoeoides), a type of flat-wing damselfly, were common around Cairns and the surrounding area. I wish we had such beauties near me. This photo shows a male and female at Lake Eacham. 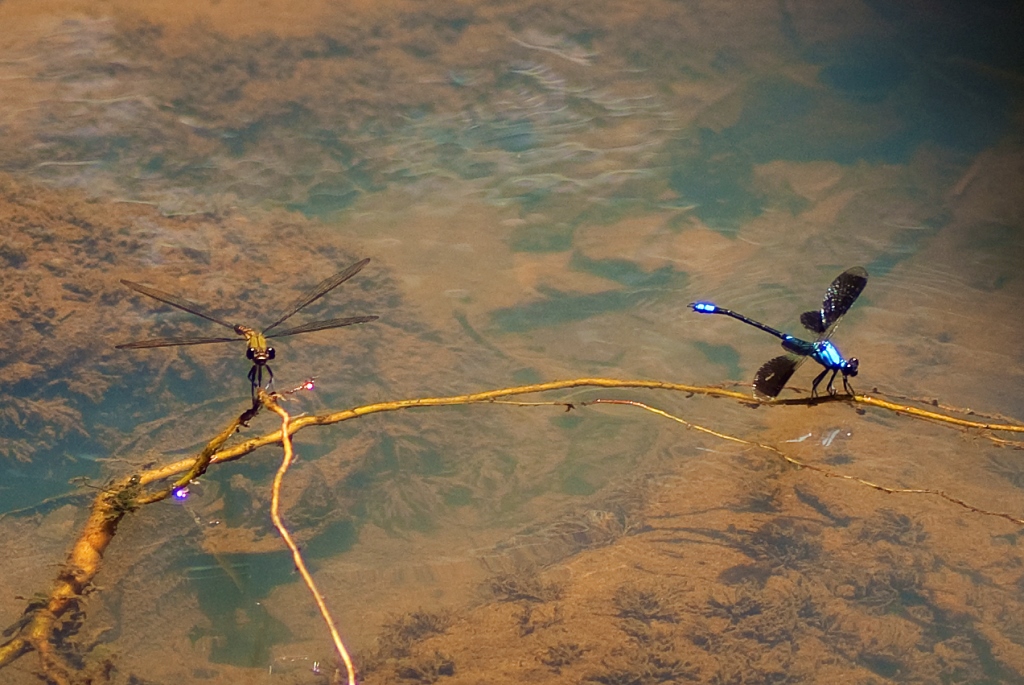 This is a lichen-mimicking caterpillar, Enispa prolectus. These caterpillars fasten small pieces of lichen to their backs with silk as a form of camouflage. 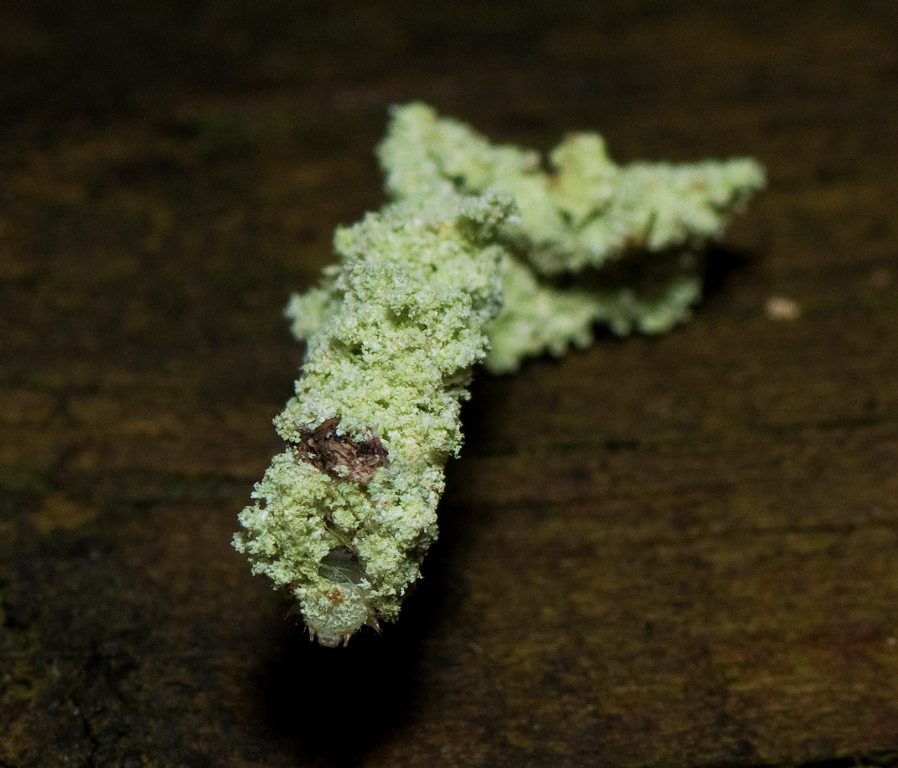 As the area is a tropical rainforest and it was actually raining while I was there, I was inevitably attacked by many, many leeches. However, I spotted this one (Haemadipsa sp.) on a railing at night actively questing, and I was struck by the bright colours. I have to wonder, are these colours signals to each other, warning, camouflage or just random? 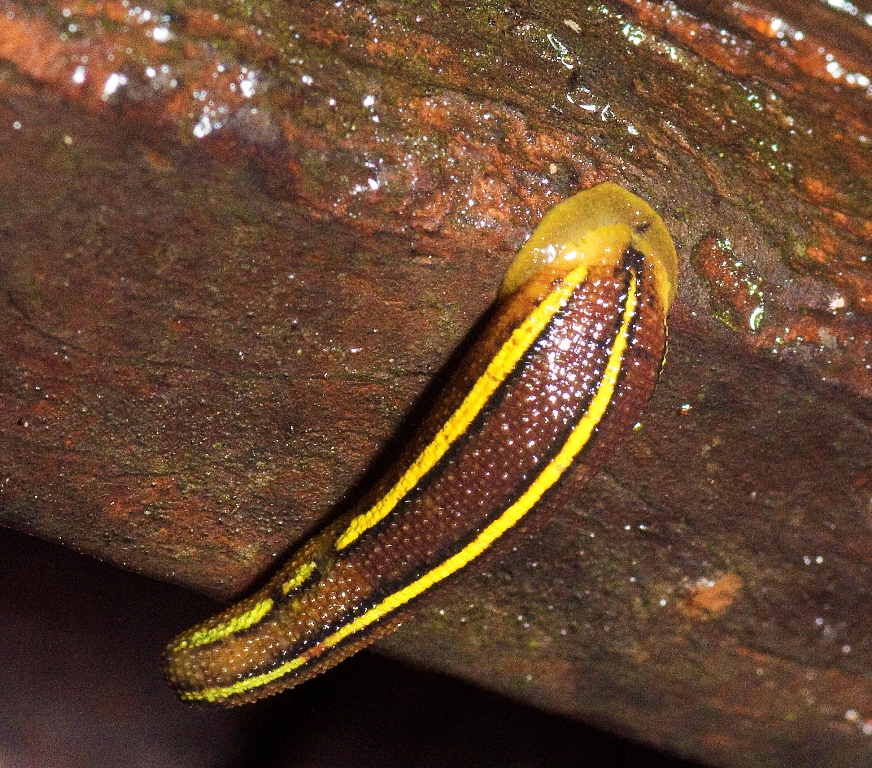 One for Mark Sturtevant: a Pisuarid spider, related to the Dolomedes triton that he featured recently. This one is Hygropoda lineata. These were very common in the north. Rather than living by the water, these spiders make a simple web platform across the surface of broad leaves and sit on top of it, often looking like they are hovering in thin air. 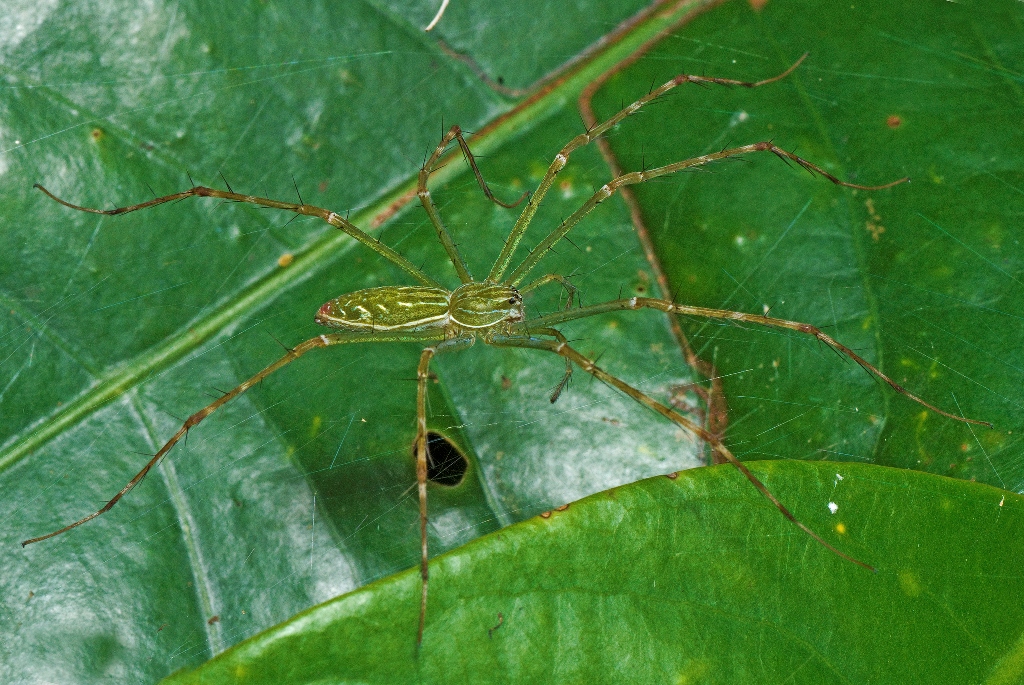 Nephila pilipes, the Giant Golden Orbweaver. These are well named. We have Golden Orbweavers at home, which are big spiders, but these northern ones are mind bending. This one had a body length of about 50mm and was eating a cicada the size of my thumb. The span of the web was about 6 metres from attachment to attachment and the main orb about a metre and a half across.

They are only weakly venomous to humans and very reluctant to bite even when handled, preferring just to climb away. 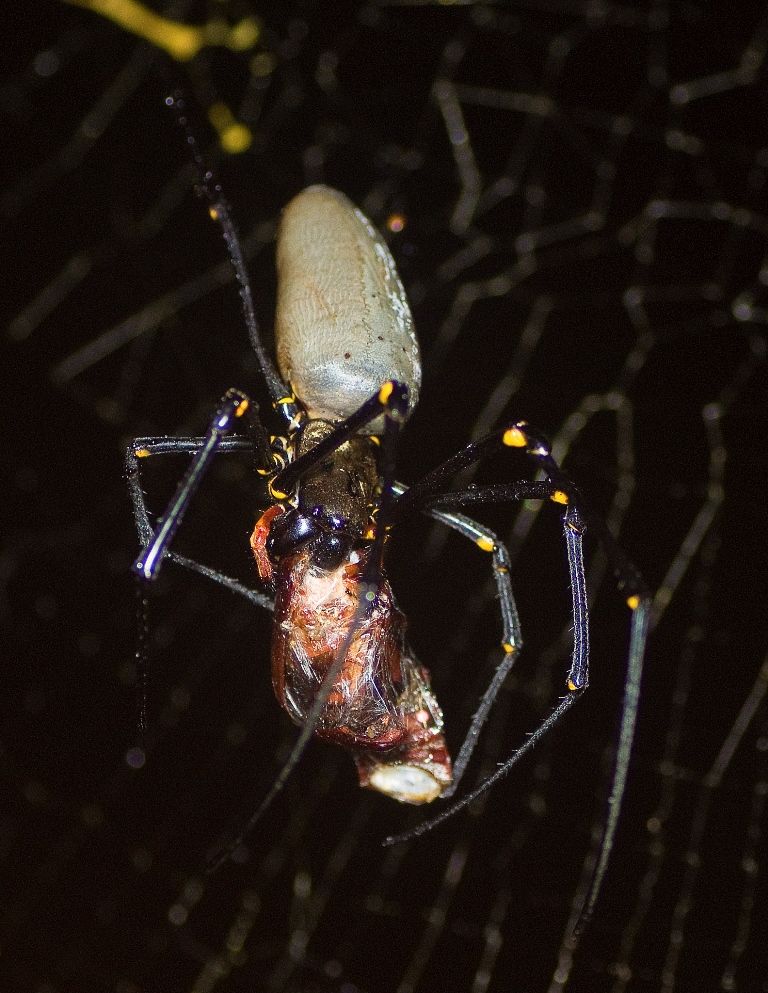 There were a huge variety of amazing ant species to be found in the forests, but by far the most common were the Green Weaver Ants, Oecophylla smaragdina. I was always checking their trails for signs of the spiders that mimic them. Unfortunately, I didn’t find any. I did however observe their interesting behaviour of holding leaves together like living stitches. Inside the ball of leaves larvae are being hatched. The larvae are then taken by workers and produce silk to tie the leaves together more permanently. 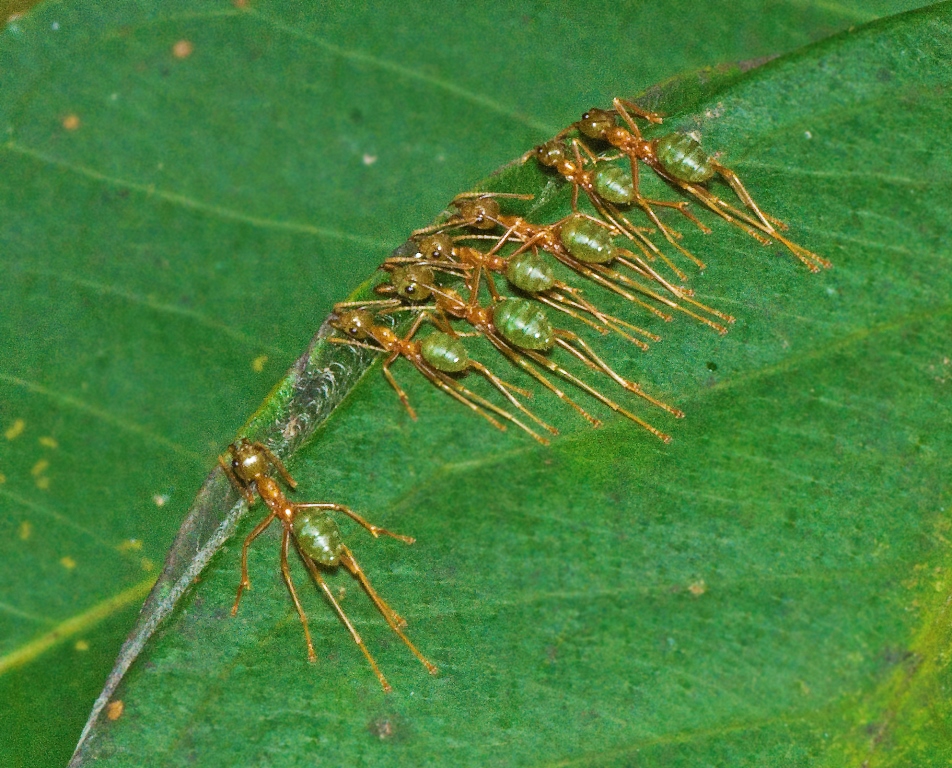 In Speewah Conservation Park there were lots of climbing palms, Calamus caryotoides. The mature stems are festooned with black spines to ward off herbivores. However, these caterpillars, which I’ve yet to ID, use the spines to create a protective home as the crawl around and eat the leaves. 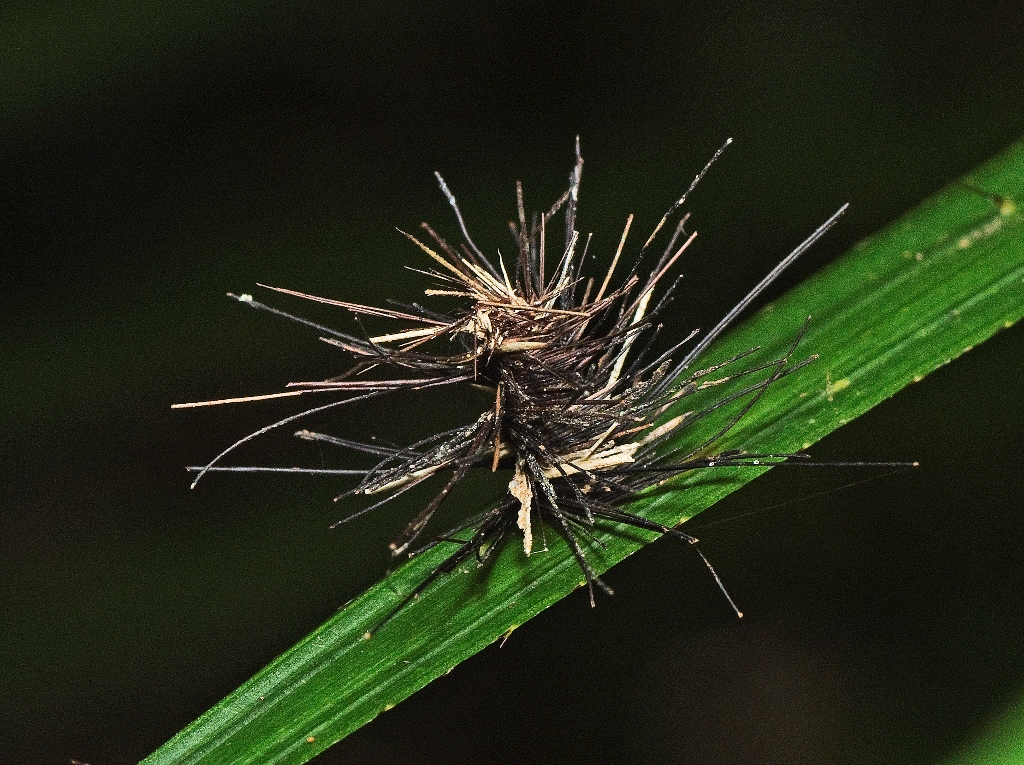 These long-jawed orbweavers, Tetragnatha rubriventris, were very common around Cairns. They have massive hinged chelicerae and the males have large clubbed pedipalps with complicated spiralled spines for placing a sperm packet into the female epigynum. all this weirdness makes them great photo subjects for a really alien look. 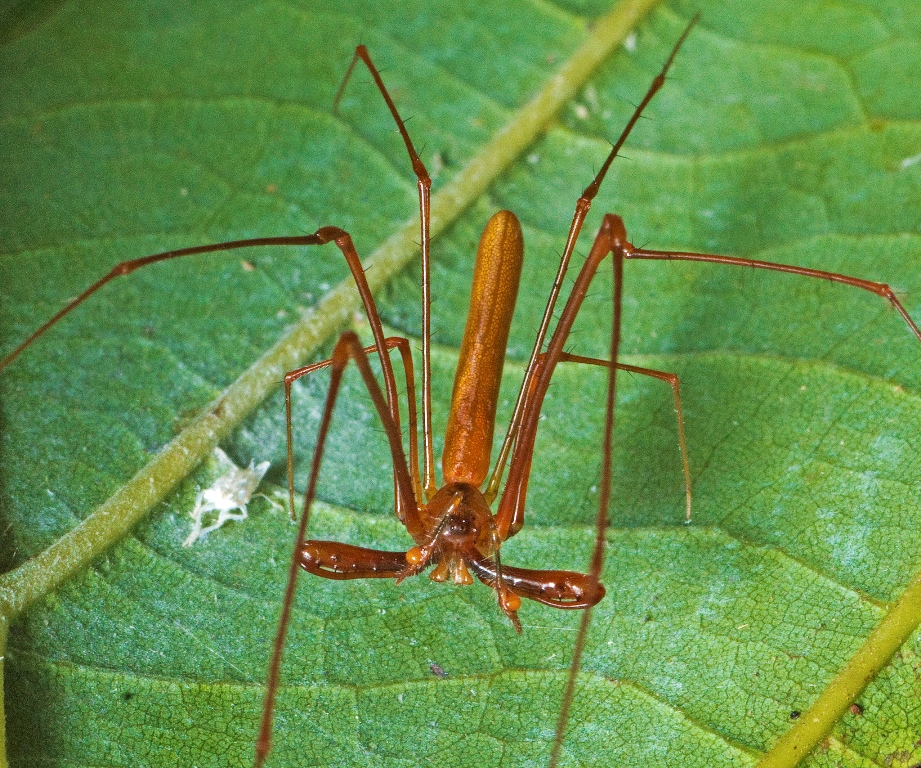 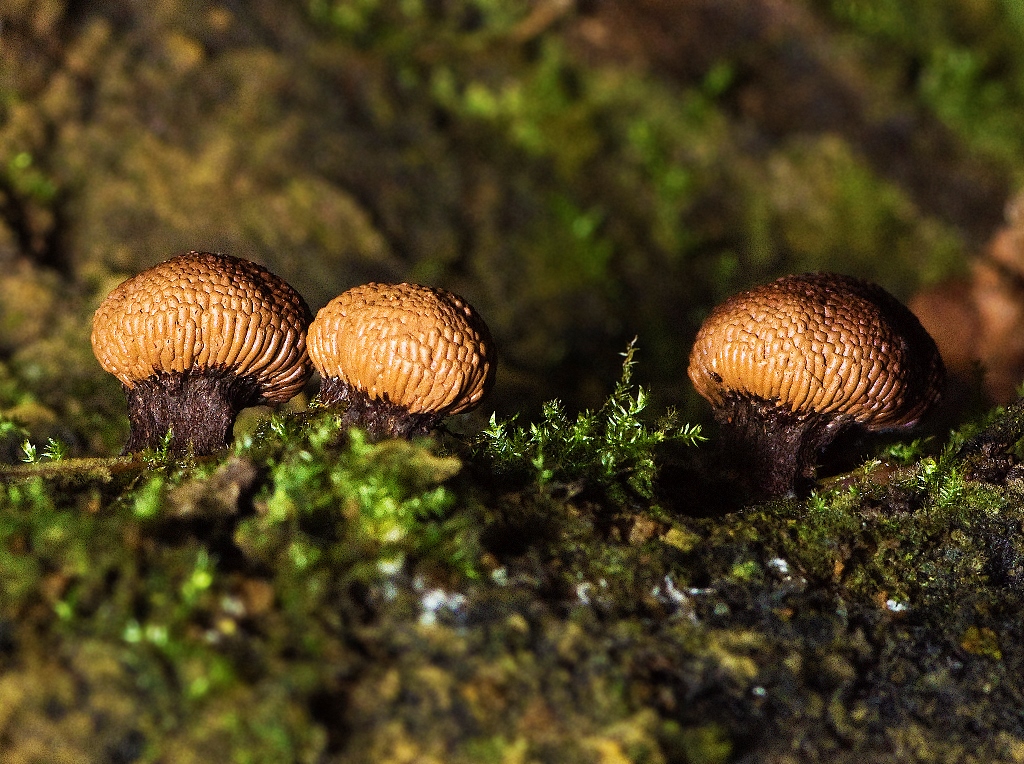 And back at my motel there was a large Peacock Carpenter Bee (Xylocopa (Lestis) sp.) in the flowers of a Monkey Rope vine (Parsonsia sp). 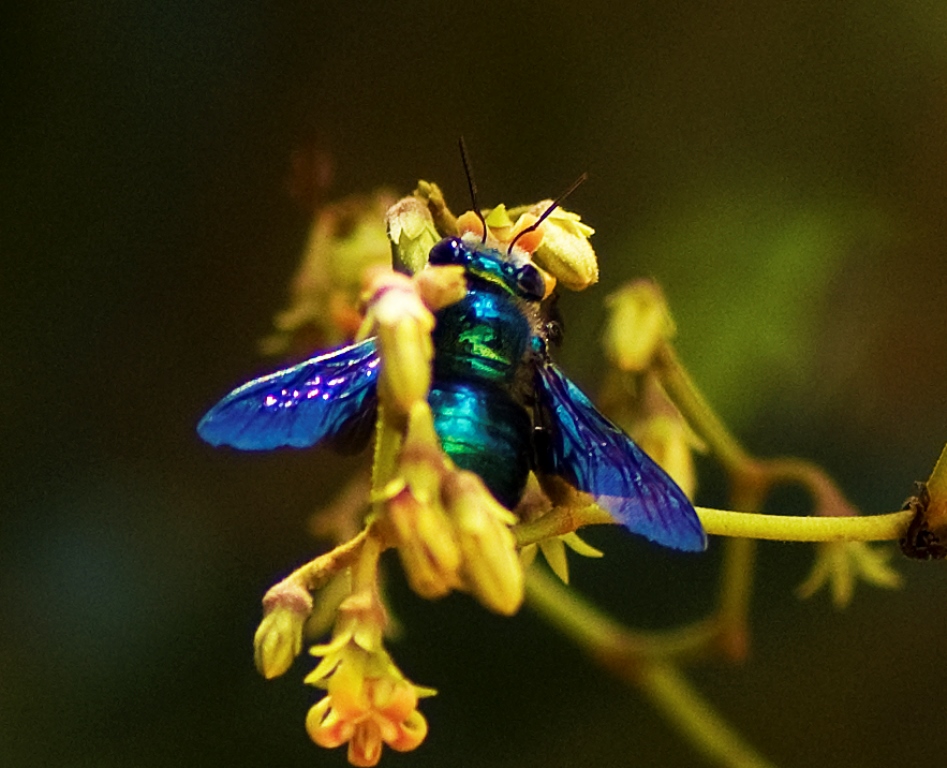