And so we have another New York Times column to ponder, but one that won’t get its author, David Brooks, fired. For it’s just religion-coddling message: “if we want true social justice, the best way is to embrace the Christian religious view, which leads naturally to the healing of society”.

It’s dreck—dreck covered liberally with the maple syrup of feel-good words. It carries no weight, is dubious in its argument, and will lead to no results. I think part of Brooks’s job is to hold down the Be Nice to Religion desk at the paper. But this column is simply a waste of words—a bit of chest-thumping by Brooks about the wonder of faith. 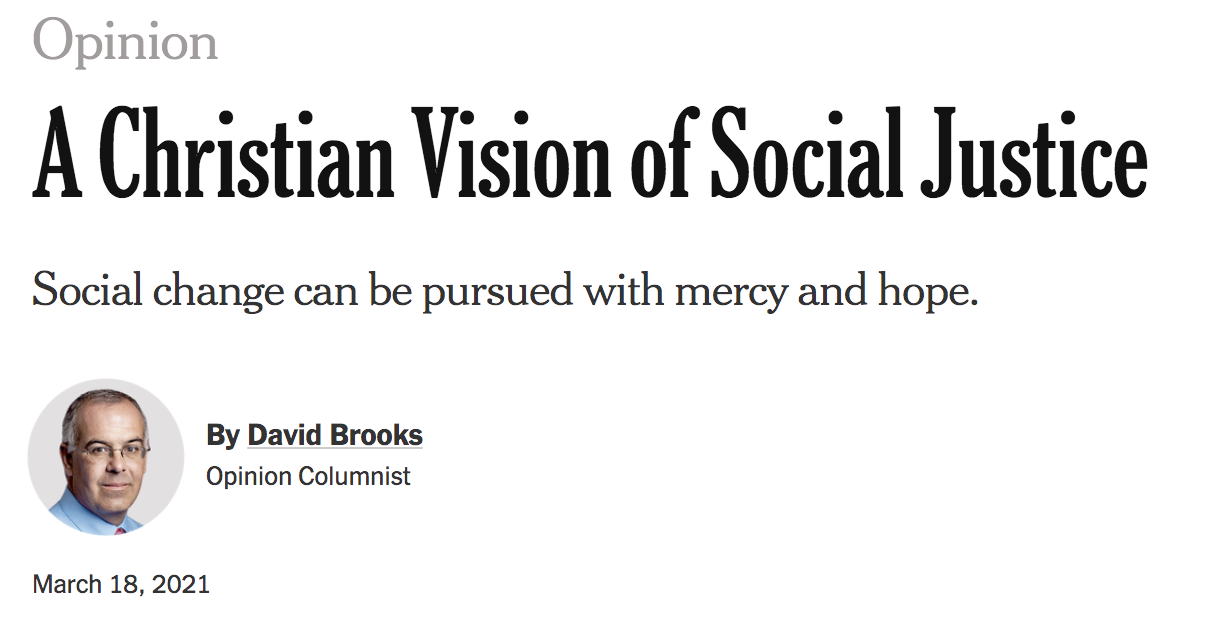 As reader Narendran pointed out, the column is slightly misleading, for Brooks describes his interviewee, Esau McCaulley, who is African-American, as “a New Testament professor at Wheaton College and a contributing writer for New York Times Opinion.” That’s true, but Brooks doesn’t mention that McCaulley is also an Anglican priest. And so he’s preaching in his piece, and Brooks eats it up.

I’ll be brief (or so I always think). The whole schmear rests on the supposition that Christianity is true (e.g., we were created by God). If that’s not the case, there’s no good reason to lean on the Bible and liberal Christianity to buttress genuine advances in social justice. Humanism will serve just as well. But let’s look at McCaulley’s narrative that Brooks found “riveting”.

This vision begins with respect for the equal dignity of each person. It is based on the idea that we are all made in the image of God. It abhors any attempt to dehumanize anybody on any front. We may be unjustly divided in a zillion ways, but a fundamental human solidarity in being part of the same creation.

But we weren’t made in the image of God! Doesn’t Brooks accept evolution? And if this God-given equality just a metaphor, then it’s meaningless. A metaphor for what?

One can better ground equal treatment of people on humanistic morality. Granted, that morality, like all morality, must in the end be subjective, but I’m a consequentialist and happen to believe that accepting equal dignity of each person is the notion that works best for society.

The Christian social justice vision also emphasizes the importance of memory. The Bible is filled with stories of marginalization and transformation, which we continue to live out. Exodus is the complicated history of how a fractious people comes together to form a nation.

Do we really need the Bible to remind us to remember history, especially because much of the history of the Bible, and its stories of “marginalization and transformation” (which include fig trees and pigs) are bogus. Humanism would also emphasize history, but true history.

McCaulley doesn’t describe racism as a problem, but as a sin enmeshed with other sins, like greed and lust. Some people don’t like “sin” talk. But to cast racism as a sin is useful in many ways.

The concept of sin gives us an action plan to struggle against it: acknowledge the sin, confess the sin, ask forgiveness for the sin, turn away from the sin, restore the wrong done. If racism is America’s collective sin then the tasks are: tell the truth about racism, turn away from racism, offer reparations for racism.

Crikey! Why do we need “sin”? (This, by the way, feeds directly into John McWhorter’s view that Critical Social Justice is truly a religion.) You can do equally well with the concept of bad or harmful behavior, which racism is. And the tasks that stem from seeing racism as a “sin” are identical to the tasks broached by humanists, who of course differ (as do religious people) on the question of “reparations.”

It will have crossed your mind that #NotAllChristians are adherents to social justice in the same way as Brooks and pastor McCaulley. How many evangelical Christians marched under the banner of Trump?  Brooks mentions that good things have been done under the aegis of religion (e.g., the Civil Rights movement of the Sixties), and that’s true. But remember the words of Steven Weinberg: