Everybody knows that Robert Aaron Long killed 8 people in Atlanta on Tuesday, 6 of them Asian women who worked at two spas. He apparently was on his way to Florida to engage in more murders, but was fortunately caught by the cops before he could kill again. As far as we know, he wasn’t motivated to kill by hatred of Asians (see below), but it’s early days.  We also know that there are reports that genuine hate crimes against Asians have increased dramatically, said to be a form of “retribution” for the coronavirus.

In this climate, people are already characterizing the Atlanta shooting as a hate crime, even though there’s evidence that if there was hate involved, it wasn’t against a “protected group” per se, but towards women at spas whom Long paid for sex. If this is the case, the murders were not attributable to the victims being Asian per se, but to their involvement in Long’s violating his strict religious upbringing and church membership, which forbad extramarital sex.  Long had reportedly been treated for sex addiction, and, at least to the cops, said he was trying to “eliminate the temptation.”  (If this is true, it would be a case of “religion poisoning everything”, since the killing would likely not have taken place without those prohibitions).  Under Georgia law, this probably wouldn’t be a hate crime, though of course sex addiction is NOT an excuse for mass murder! What’s at issue here is whether Long was motivated by anti-Asian bias or by a twisted cognitive dissonance caused by religion and sex—or both, or something else.

As I said earlier, it seems that many people are eager to cast this as a hate crime. I’m not going to engage in psychologizing about this because that leads one down some unsavory roads. But let me say that HuffPost, at least, has managed to cast Long’s visit to Asian spas as a form of racism (see article below)—even if he wasn’t biased against Asians. (He was “fetishizing Asian women”.) But it’s not clear whether Long even did fetishize Asian women or had sex with them because they were the only ones available at spas (perhaps he abjured prostitutes working the streets). 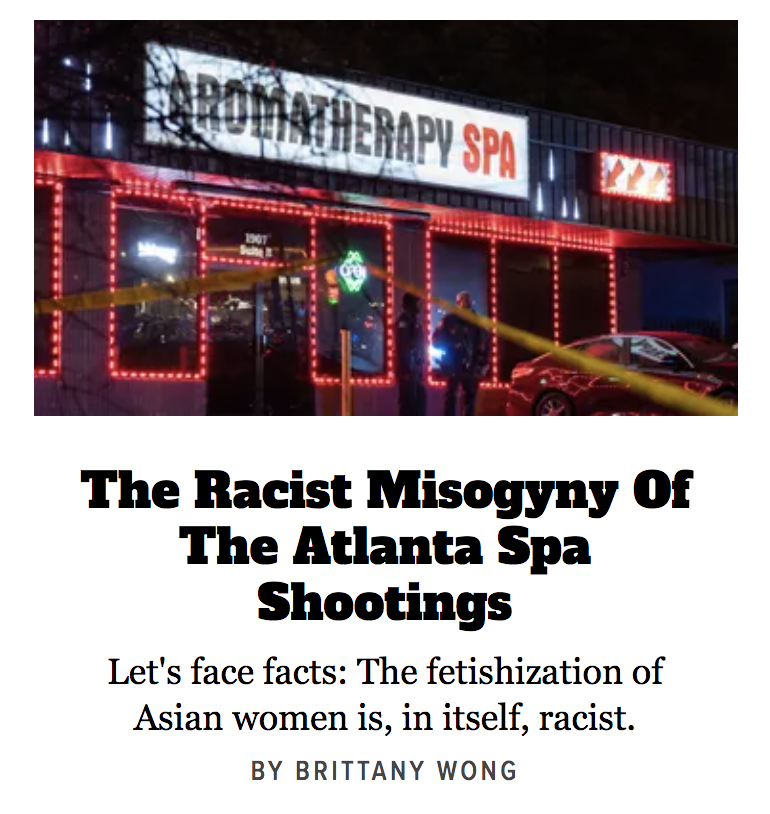 On the NBC Evening News the night before last, they interviewed an Asian woman, and asked her, as I recall, how she knew that the crime was based on bias when there was no hard evidence for that yet. She replied that it was based on “unconscious bias” that is part of systemic racism. In other words, she claimed that a hate crime was committed when the perpetrator didn’t even know he was motivated by hatred—but she apparently did!

These are not helpful claims, since all we know so far is what Long told police and what his friends say about his religious commitment.  It’s way too early to judge this as a hate crime, much less to send out alarms about a mass murder based on anti-Asian bigotry. If that’s not the case, it’s not helpful to scare people unnecessarily.

Here are the questions I asked about this, but haven’t yet answered and probably won’t. I’ll wait for the news to answer them for me (if they ever will!).

A. Is there really an increase in the proportion of hate crimes against Asians? We know that assaults and murders of Asians have increased, but have they increased disproportionately to similar crimes committed on non-Asians? As we all know, there’s been a huge increase in violent crime, including homicide, during the pandemic. I have seen no data on the proportionality in the news, though I’m prepared to believe whatever the data say.

B. What is the racial makeup of those who attack Asians? Long is white, but we’re not sure what his motivations were. I know that some of those who have killed or assaulted Asians are Black, but it’s actually surprisingly hard to find data on this. For several reasons, though, one wants to know who, exactly, is attacking Asians. The most important is that the attacks are said by some to be motivated by “White supremacy.” Yet if most of the crimes are committed by people of color, you can’t make that claim. Further, there’s a well-known animus against Asians among many poor Blacks, for the same reason that many blacks disliked Jews—they were merchants in underserved communities and thus were perceived as exploiting people of color.

C. If there is an increase in the proportion of assaults on Asians, is it because they are Asian per se, or because they are perceived to have money and property? But I am not sure if this question is relevant to the issue of a “hate crime”, and I don’t know how one could answer it except by taking the word of a criminal.

By the way, if you know the answers to questions A and B, by all means weigh in below.

Finally, and this isn’t related to the above but did strike me: are Asian women disproportionately concentrated in sex work in spas? This seems to be the conventional wisdom, but I don’t know the data. But if it’s true, I’d like to know why. Are they driven to this by poverty, is there really a fetishization of Asian women that would cause this, or is it some custom based on where immigrant Asians have found work, perhaps based on those women being exploited?

My point is not, of course, to excuse the accused killer, but to argue that we shouldn’t rush to judgment about why he killed—especially when the evidence we do have does not point towards bigotry. That knowledge is useful in judging the extent of bigotry-based crime, which is the first step in trying to stop it. It’s also important in making sure that we don’t unnecessarily escalate fears, making those of foreign descent feel extra scared or unwelcome.

UPDATE: Here’s some data from 2018 on the proportion of different groups who were subject to violent crime, and the ethnicities of the criminal. These were tweeted by Wilfred Reilly. Now the data are three years old, and don’t reflect the uptick in crimes on Asians that’s said to have occurred. At least back then, Asians were not predominantly assaulted by Whites, but Whites, Blacks, and other Asians assaulted Asians with roughly equal frequency.  (h/t: Luana)

In 2019, the total population percentage of these groups from Census statistics were:

74 thoughts on “The rush to judgment in Atlanta”