In 2018, the right-wing Polish government, apparently eager to burnish their image, passed a law forbidding anyone from “unjustly and incorrectly blaming Poles for crimes committed by the Germans” during World War II. In other words, if you accused Poles of helping the Germans kill Jews, or of doing it on their own, you were breaking the law—unless you could prove that statement with 100% assurance. The penalty for purveying accusations of complicity against Poles that can’t be “proven” was up to three years in prison, but the prison term has since been dropped after an international outcry led by Israel. However, the law still applies, and applies worldwide, which is why one of the accused in the present case is a Polish-Canadian. Whether Poland would try to extradite foreign historians who violate the law isn’t clear!

Now there’s no doubt that many Poles did indeed kill Jews on their own (the Polish police were notorious for this), or helped the Germans with pogroms (viz., the Einsatzgruppen), as well as turning in Jews to the authorities, which of course would lead to their extermination. Some took lots of money from Jews to help them escape or hide them. There is no doubt that many Poles were complicit in the Holocaust, and this is historically documented. (Many Poles also helped the Jews during the war; I’m not implying that every Pole hated every Polish Jew!)

Nevertheless, Poland’s ruling “Law and Justice” party is trying to use the law to perpetrate injustice. The latest manifestation of this form of Holocaust denial, as described in the Guardian article below, is the prosecution of two Polish historians for accusing a Pole of having aided the Nazis by turning in Jews to authorities during the war. Click on screenshot to read. 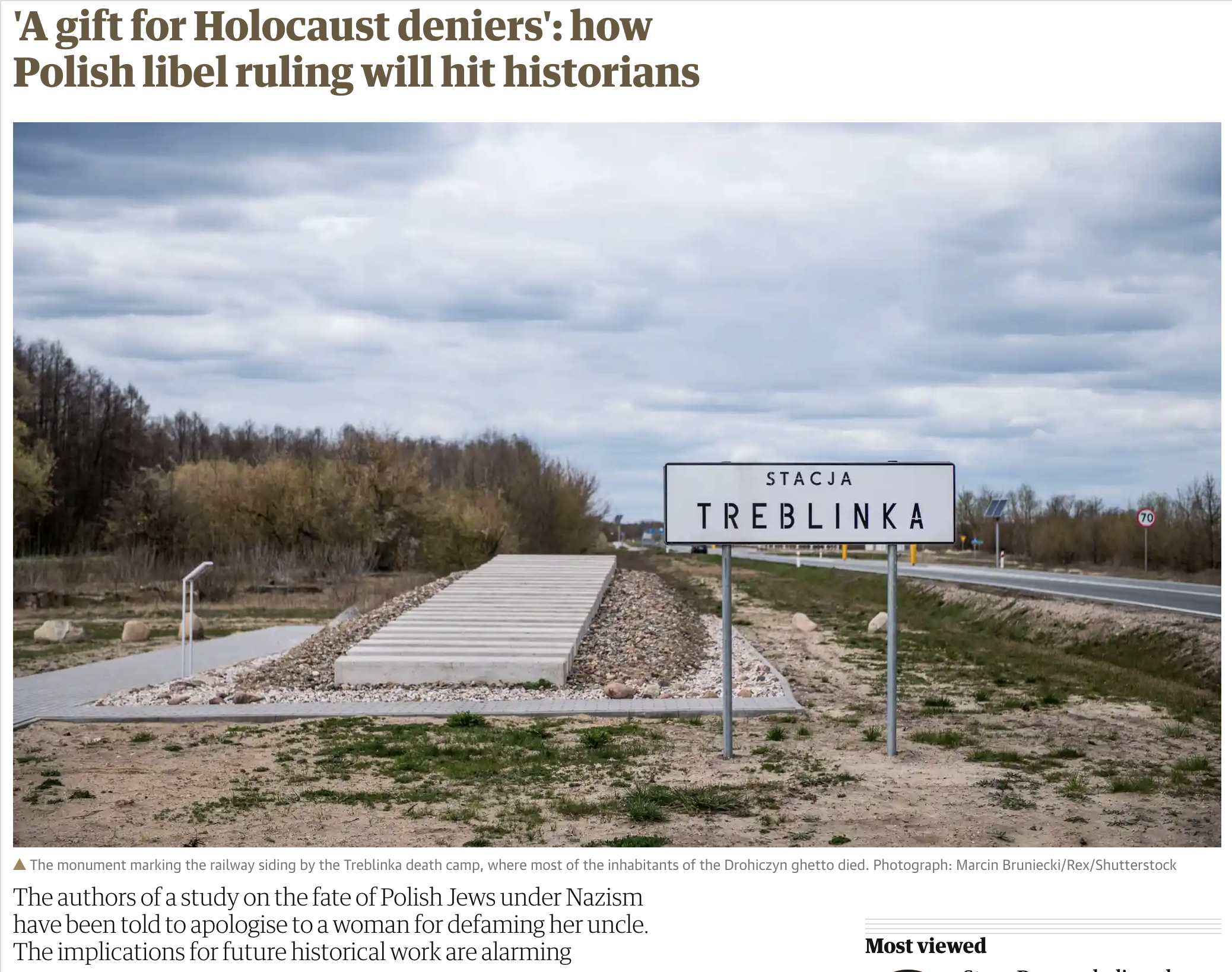 The story is a bit complicated. Two Polish historians, Barbara Engelking and Jan Grabowski (who works in Ottawa) mention in Night Without End, a new two-volume history, that a Pole, Edward Malinowski, denounced 16 hiding Jews to the authorities, who immediately killed those Jews. This comes, however, from the testimony of a woman, Estera Siemiatycka who Malinowski saved.  Her story changed after she left Poland, when she claimed not only that she had paid Malinowski to help her, but also asserted that he denounced 16 other Jews in hiding. Malinowski was tried by the Communists after the war for denouncing Jews, but because Siemiatycka hadn’t yet recanted, found him not guilty.

The historians Engelking and Grabowski present all these stories in their book, but conclude, based on their own research, that Malinowski was indeed guilty of denouncing Jews.  Because of this conclusion, Malinowski’s niece, Filomena Leszczyńska, sued the historians under the new law. She was supported by The Polish League Against Defamation, which is essentially part of the ruling Law and Justice party.

Apparently because historians’ judgment is not good enough (you have to be 100% sure, apparently, and who ever is in matters like this?), the court found Engelking and Grabowski guilty, ordering them to apologize to Leszczyńska (there was no fine or jail term). They refused, and both sides appealed the case to the next highest court. This could go on for a long time, and if the Supreme Court ultimately finds the historians guilty, and they still refuse to apologize, they could be fined or have their books censored.  To be sure, the Court said that the law wasn’t meant to stifle academic research; as the Guardian notes:

Leszczyńska and her backers took a different legal route in their case against Engelking and Grabowski, claiming that the historians had violated her personal rights. The court conceded that the claimant’s right to “respect for the memory of a relative” had been infringed, but threw out the other claims and did not award damages, stating that the judgment was not intended to stifle academic research. The historians are appealing the judgment.

That claim that the government didn’t intend to stifle research is pure cant, for what other purpose would it have than to obscure inconvenient truths?

In the end, whatever your interpretation of the law, two historians were still taken to court, essentially for dissing Malinowski. And others have argued (and I concur) that this will indeed have a chilling effect on historical research. During the murky days of WWII, how often do we have watertight proof that a Pole was indeed complicit in the persecution of Jews? Some criticism of the law:

“I’ve got real doubts about this judgment,” says lawyer Michał Jabłoński, who acted for the defence. “It is dangerous for freedom of speech and academic research. It is unprecedented that the court decides which historical source is reliable instead of researchers. This judgment requires that testimonies of survivors are verified before they are published anywhere, that researchers have to be 100% sure that testimonies are accurate before they publish conclusions, especially if they regard someone’s misconduct. In the view of the court, the existence of other sources that are contrary to a survivor’s testimony should prevent researchers from publishing their research if it interferes with someone’s personal rights. Such a standard makes historical research a dangerous job, in fact impossible, as in most cases survivors’ testimonies can’t be verified.”

International organisations and academics have also been swift to condemn the ruling. Israel’s Holocaust memorial Yad Vashem said it was “deeply disturbed by its implications.” Sascha Feuchert, director of the Arbeitsstelle Holocaustliteratur at the University of Giessen, Germany, said: “For many incidents in the Holocaust, we only have the testimonies from survivors. Of course they need to be checked and discussed in academic debates as far as possible. But this court ruling and its conclusions not only threaten the foundations of research based on survivor testimony, it could also be a gift for Holocaust deniers.”

. . . Mikołaj Grynberg, a writer who has documented Polish-Jewish accounts in his books, believes that the state’s agenda to promote Polish heroism goes against historical truth. “The aim is to feel good and be a chosen people – we are the only nation that has only noble people among us,” he says. “That’s adolescent thinking and bad news that we are not growing to be an adult country. So it will stay like this for years.”

The future of historical research in Poland is thus unclear, especially for someone like the distinguished historian Jan Gross, a Polish-American who has made his career documenting Polish persecution of Jews during and after World War II.  Gross was already subject to a defamation case for saying that the Poles killed more Jews than they did Nazis during the war, though the government dropped the charges in late 2019.

There’s really no doubt that many Poles were complicit in persecuting and killing Jews during the War. (I should add here that 6,000 of them were also honored for saving Jews, and have been awarded the honor of “Righteous Among The Nations” by Yad Vashem in Israel, a title I’d love to have but is conferred only on non-Jews like Oskar Schindler.) The evidence for a Polish animus against Jews also comes from the fact that after the war the Poles continued pogroms on their own, without the Nazis. The 1946 massacre at Kielce is only one example of several instances of pogroms. Further, Poles often refused to give back the confiscated property and houses of Jews who had fled the country after those Jews returned following the war.

The two points here are that the historical record is clear, and that Poland’s government is bent on distorting it to further their own purposes. The government itself is right-wing and authoritarian, and needs to go. But it won’t, as it’s popular with a large number of Poles.

25 thoughts on “New Polish law chills the work of historians; forbids accusing Poles of complicity with Nazis against Jews in WWII”