I’m seriously sleep deprived and am finding it hard to even type.  Like many people, or so I hear, sleeping has become more erratic and disturbed during the pandemic. I’m lucky if I get 5½ hours a night, and I tend to wake up at ungodly early hours. I was going to write posts on the two articles below, but don’t have the ability to think so well today, so I’ll merely call them to your attention, make a few remarks, and pass on. Click on screenshots to access all articles. These two are “contrarian” in that they go against prevailing Woke opinion in dealing with subjects so taboo that one shouldn’t even bring them up.

The first piece, by Douglas Murray at the Spectator, deals with how reviewers—particularly the New York Times—have dealt with Ayaan Hirsi Ali’s new (and fourth) book, shown below (click to go to Amazon site). It came out just last week. 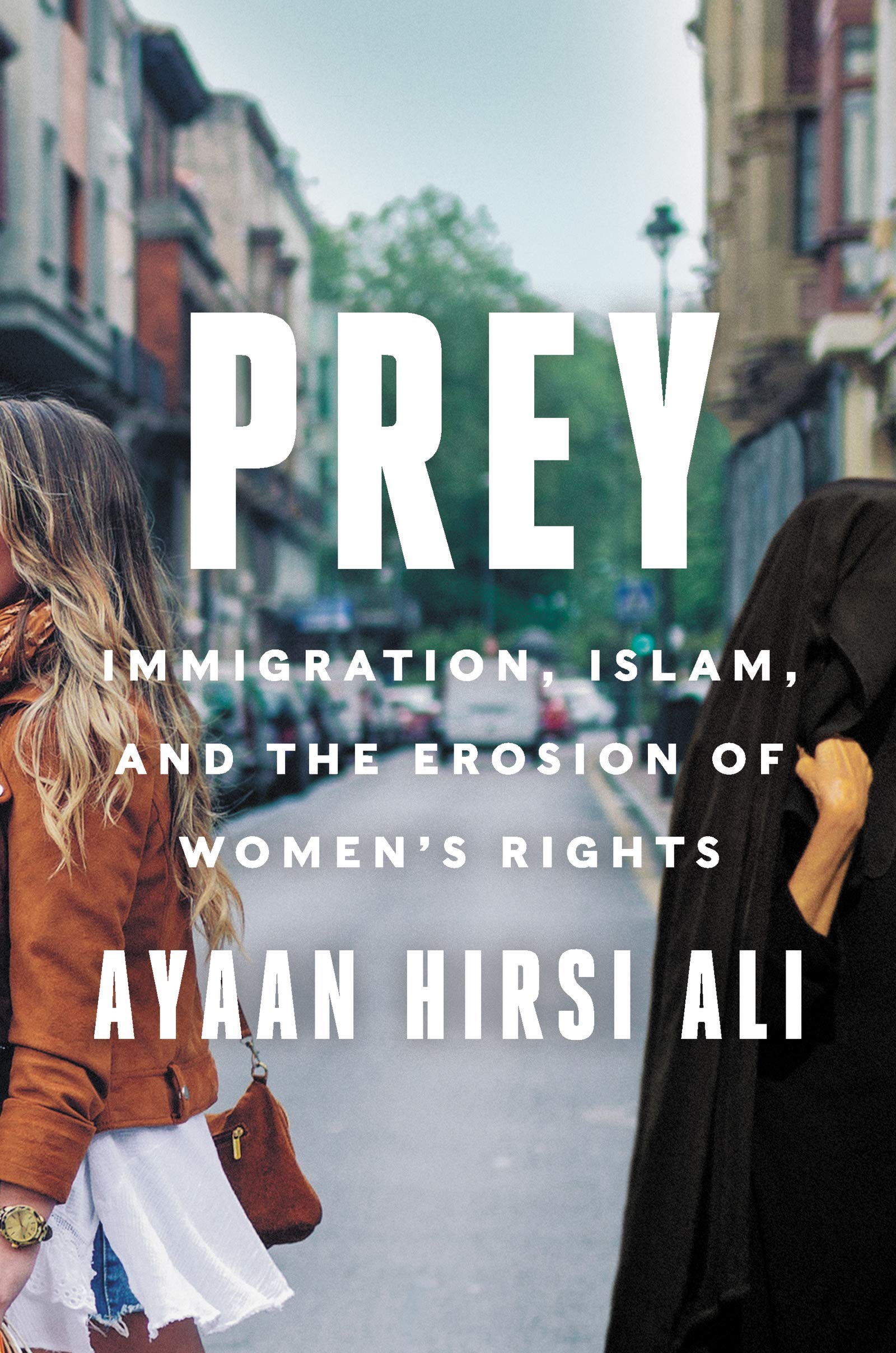 I haven’t read it yet, but will, just as I’ve read all her books. But as Hirsi Ali has been moved to the “alt-right” because of perception that she’s an “Islamophobe”, the reviewers have not been kind. And it’s going to get worse for her after this book, for it tackles the issue of immigration, and what Hirsi Ali sees as the bad consequences of allowing immigration of fundamentalist Muslims to the West. These bad consequences include Britain’s infamous “grooming gangs.” As we know, the liberal British press, and the government, does a lot to hide the fact that these gangs exist, for that admission is seen as Islamophobic.

I don’t know how we should restructure the immigration system to minimize the detrimental effects on a liberal and democratic society of admitting those with cultural norms inimical to its values, but Hirsi Ali apparently has some solutions. I’ll withhold judgement until I read her book.

What Murray does is analyze a New York Times review of Hirsi Ali’s book (click on screenshot below), and make the case that the reviewer, Jill Filipovic, disses the book unfairly, criticizing Hirsi Ali for things she didn’t say, and doing that because Hirsi Ali’s message is not consonant with the NYT’s biases. 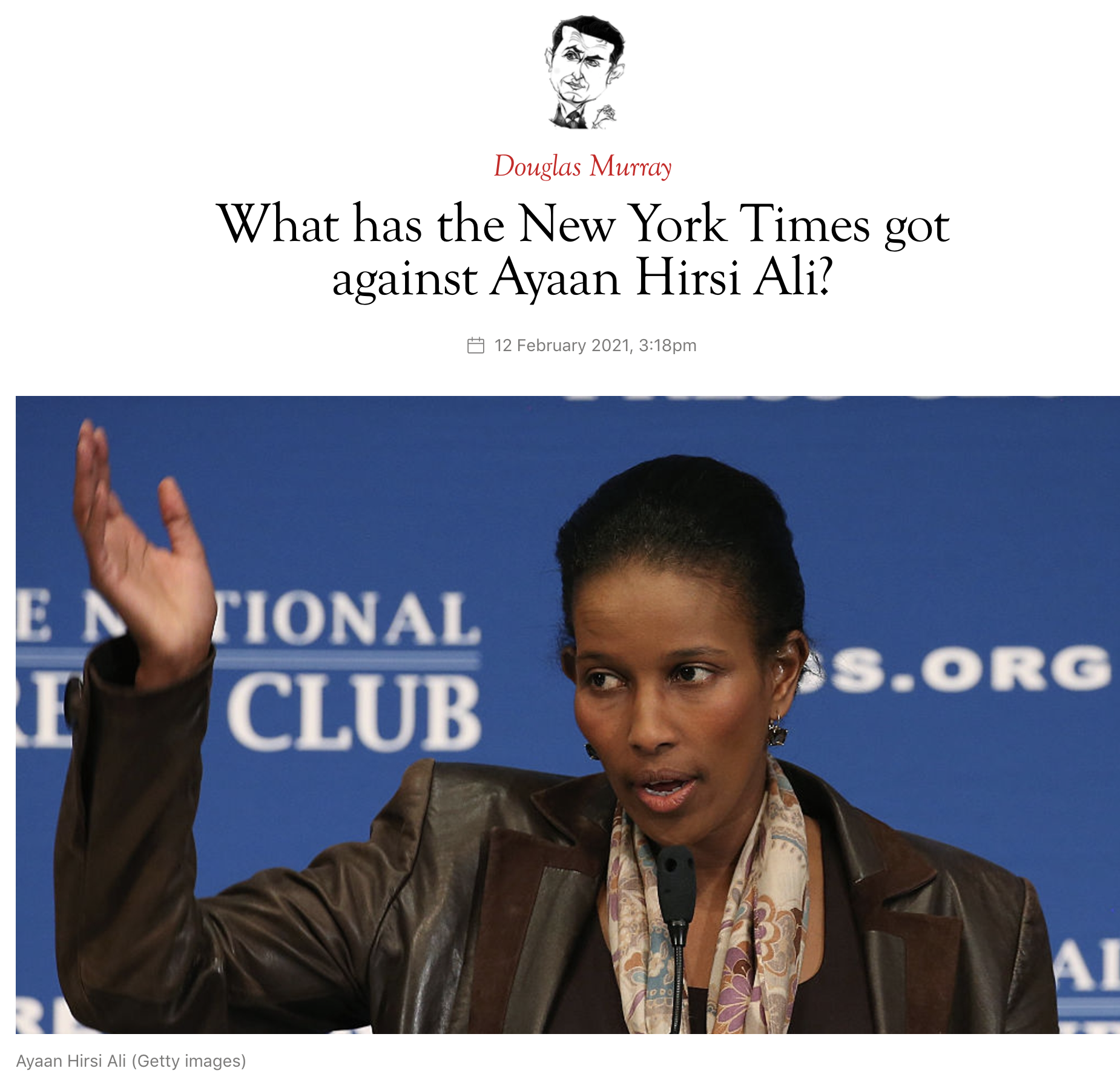 As soon as [Hirsi Ali’s] book came out, The New York Times published a characteristically inaccurate hit-piece to try to kill it at birth. Speaking engagements – even virtual ones – involving Hirsi Ali came under sustained pressure to cancel. The Council on American-Islamic Relations and other Muslim groups started to campaign against the book. And figures like an obscure communist activist called Maryam Namazie, who claims to campaign against Islamism, found common cause with the Islamists in trying to take-out Hirsi Ali. In the latter case, Hirsi Ali was berated for having views that are ‘regressive’, as though one must have ‘progressive’ communist views or have no views at all.

But in the scheme of things, it is the New York Times whose campaign against the book will register with the most. And so it is worth showing just how false and agenda-laden that piece – written by one Jill Filipovic – actually is.

Throughout her review, Filipovic seems intent on using Hirsi Ali’s personal story against her. . .

Murray then goes through a number of Filipovic’s criticisms and argues that they completely misrepresent what Hirsi Ali says. Certainly the excerpts seem to show that when put next to some of Hirsi Ali’s statements, but one needs to read her book to get the full context.

At the end, Murray hypothesizes why the NYT is so hard (and so misguided) on Ayaan’s book, and, knowing the paper, there’s at least a bit of truth in this:

In recent times, the NYT has had a terrible problem – more so than any other mainstream publication – of racism among its staff. The publication has hired writers who make overtly racist comments (Sarah Jeong) and fired other people for allegedly using racist terminology.

I don’t know why the NYT can’t get through a month without an internal racism scandal, but I begin to desire to take it by its own lights and simply accept that the paper in question has a racism problem. And I suppose that a piece like Filipovic’s must be read in this light.

Filipovic seems to think that because Ayaan Hirsi Ali is a black immigrant of Muslim origin she must say only one set of things. When she says a different set of things she must have words put in her mouth by America’s former paper of record. That paper must then muffle the woman’s opinions, defame her and otherwise unvoice her. These have all been tropes in the history of racism. And I suppose that the history of racism is alive, well and continuing at the New York Times. Under the guise of ‘anti-racism’, obviously.

It’s true that Hirsi Ali doesn’t say the kind of stuff that the NYT finds congenial. Indeed, if anyone qualifies as expressing “Islamophobia”, it is her, for she is indeed afraid—not of Islam itself, but of the tenets of Islam that are pernicious and dangerous to men and especially women. Seen in that light, “Islamophobia” isn’t always invidious, but the term is used to slander those who criticize anything about Islam. And the misogynistic, homophobic, and oppressive tenets of Islam are indeed dangerous when transplanted into liberal Western cultures. But we are not allowed to speak of such things, for this subject is taboo.

On February 8, Glenn Loury (most of you know of him; he’s a black economist at Brown) delivered a lecture at the University of Colorado at Boulder; it was part of the Benson Center Lecture Series.  He’s now published the text of the lecture at Quillette (click on screenshot): 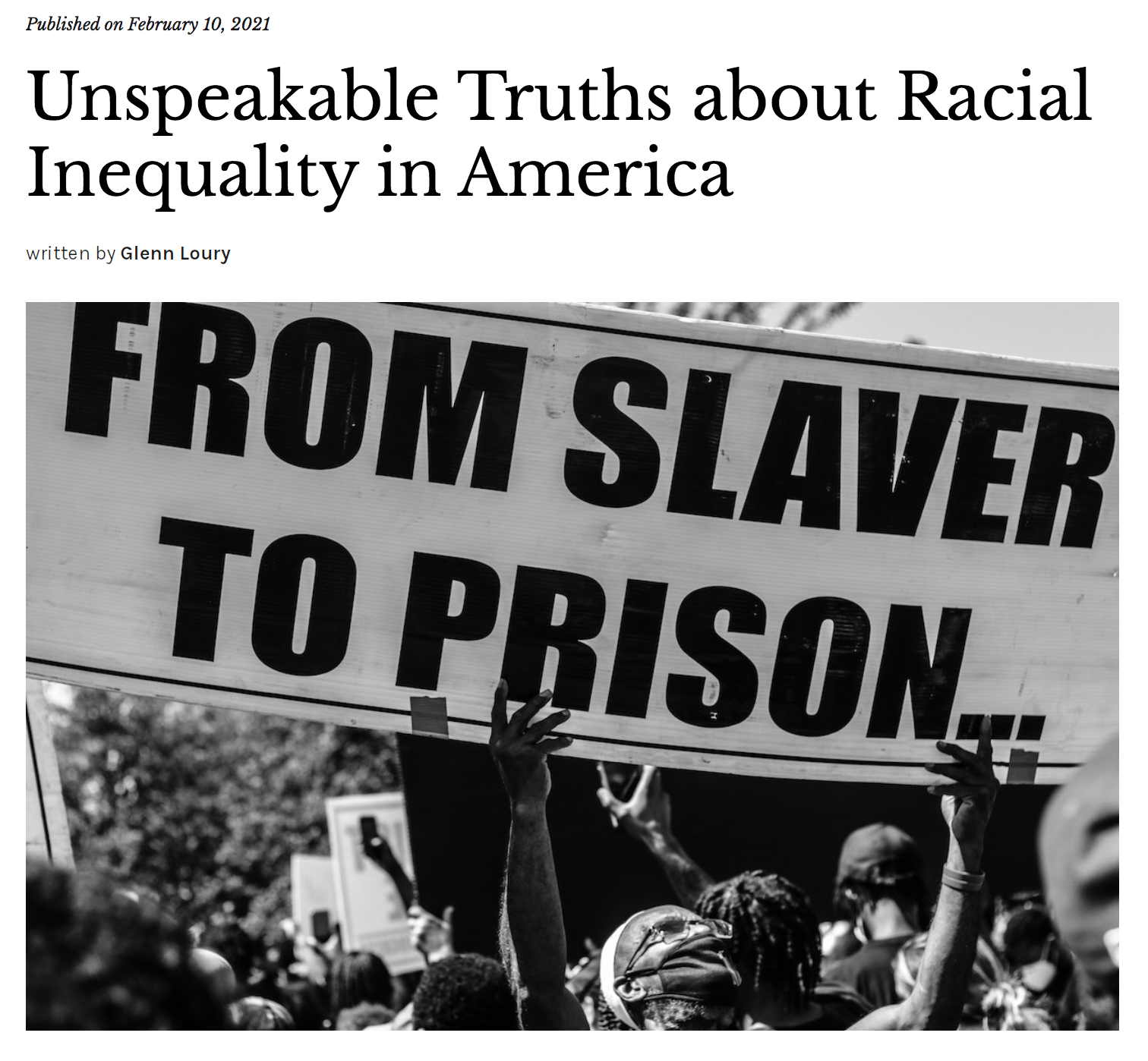 Loury’s “unspeakable truths” involve placing some of the blame for black inequality on the black community itself. While the aspects of “black culture” that he sees as inimical, like single-mother families, may ultimately rest on racism, the family issue has worsened substantially since the 1950’s, and it’s hard to see that as a result of either historical racism or present-day “systemic” racism—which surely has not gotten worse since the 1950s. At any rate, I’ll list Loury’s unspeakable truths and recommend that you read his piece. Here his words are indented:

The first unspeakable truth: Downplaying behavioral disparities by race is actually a “bluff”. Socially mediated behavioral issues lie at the root of today’s racial inequality problem. They are real and must be faced squarely if we are to grasp why racial disparities persist. This is a painful necessity.

Another unspeakable truth: We must put the police killings of black Americans into perspective. . . For every black killed by the police, more than 25 other black people meet their end because of homicides committed by other blacks. This is not to ignore the significance of holding police accountable for how they exercise their power vis-à-vis citizens. It is merely to notice how very easy it is to overstate the significance and the extent of this phenomenon, precisely as the Black Lives Matter activists have done.

Thus, the narrative that something called “white supremacy” and “systemic racism” have put a metaphorical “knee on the neck” of black America is simply false. The idea that as a black person I dare not step from my door for fear that the police would round me up or gun me down or bludgeon me to death because of my race is simply ridiculous.

Yet another unspeakable truth: There is a dark side to the “white fragility” blame game. Likewise, I suspect that what we are hearing from the progressives in the academy and the media is but one side of the “whiteness” card. That is, I wonder if the “white-guilt” and “white-apologia” and “white-privilege” view of the world cannot exist except also to give birth to a “white-pride” backlash, even if the latter is seldom expressed overtly—it being politically incorrect to do so.

The above is the least credible of Loury’s worries, I think, but may contain some truth. I have no idea if the application of Critical Race Theory, for example, has turned some whites into white supremacists.

On the unspeakable infantilization of “black fragility”I would add that there is an assumption of “black fragility,” or at least of black lack of resilience lurking behind these anti-racism arguments. Blacks are being treated like infants whom one dares not to touch. One dares not say the wrong word in front of us; to ask any question that might offend us; to demand anything from us, for fear that we will be so adversely impacted by that. The presumption is that black people cannot be disagreed with, criticized, called to account, or asked for anything.

On achieving “true equality” for black Americans. . . Here, then, is my final unspeakable truth, which I utter now in defiance of “cancel culture”: If we blacks want to walk with dignity—if we want to be truly equal—then we must realize that white people cannot give us equality. We actually have to actually earn equal status. Please don’t cancel me just yet, because I am on the side of black people here. But I feel obliged to report that equality of dignity, equality of standing, equality of honor, of security in one’s position in society, equality of being able to command the respect of others—this is not something that can be simply handed over. Rather, it is something that one has to wrest from a cruel and indifferent world with hard work, with our bare hands, inspired by the example of our enslaved and newly freed ancestors. We have to make ourselves equal. No one can do it for us.

The other day, a black reader made a comment to the effect that I like John McWhorter’s views (which are very similar to Loury’s) because “they let white people off the hook.” That is, by blaming black inequality and “inequity” on the black community itself, those views free whites from guilt, the need for “reparations”, and, I guess, from the need to do anything about such inequalities. I disagree on two counts. FIrst of all, as Americans we are obliged to lend a hand to those less fortunate than we. And that includes the poor and some minorities (groups like Indians, East Asian immigrants, and Nigerians are not disadvantaged). To me this doesn’t mean policing ourselves for language, scrutinizing our souls for implicit bias, or firing people who use the n-word didactically. It means a much larger and harder task, one that both Loury and McWhorter agree with: ensuring that every American has equal opportunities from the very first moment they draw breath. That will take a huge investment and reallotment of money, and I, for one, am willing to take a financial hit for this end.

Second, you can’t blame all those inequities on the perfidies of white people who, mired in their unconscious racism, promulgate “structural racism” everywhere. Things like black-on-black crime, so prevalent in my city, must be tackled by the black community as well: in fact, tackled in the main by the black community. When the commenter I just mentioned told me I was too inclined to let white people off the hook, I couldn’t resist replying that he, too, might consider that he was too inclined to let black people off the hook.

Lagniappe: Bari Weiss has a new piece on her Substack site, “Giano Carano and crowd-sourced McCarthyism“. I haven’t yet read it, but it’s free (consider subscribing, though). It’s about the actress who was fired from a television series for comparing the persecution of American conservatives to the persecution of Jews by the Nazis—a comparison that Weiss admits was stupid and ridiculous.

32 thoughts on “Readings for today: speaking the unspeakable”