Regardless of what you think about canceling book deals with those Republicans who urged an audit of the election—as Simon and Schuster did with Josh Hawley’s book (now picked up by Regnery)— surely most readers can’t agree with the letter below, which says that no publisher should put out books by anyone considered part of the Trump administration. (That also holds for those who stormed the capitol, whether or not they were arrested.)

At least that’s the way I interpret the letter, which is genuine and appeared on the website of Barry Lyga, an author of books for young adults(click on screenshot). Lyga, who did not sign the letter, titled his post “No book deals for traitors“, and I presume is opposed to the letter. But it’s already been signed by more than 500 authors, agents, and people who work in publishing; and miscreants are still signing on here. (Click on screenshot to enlarge.) 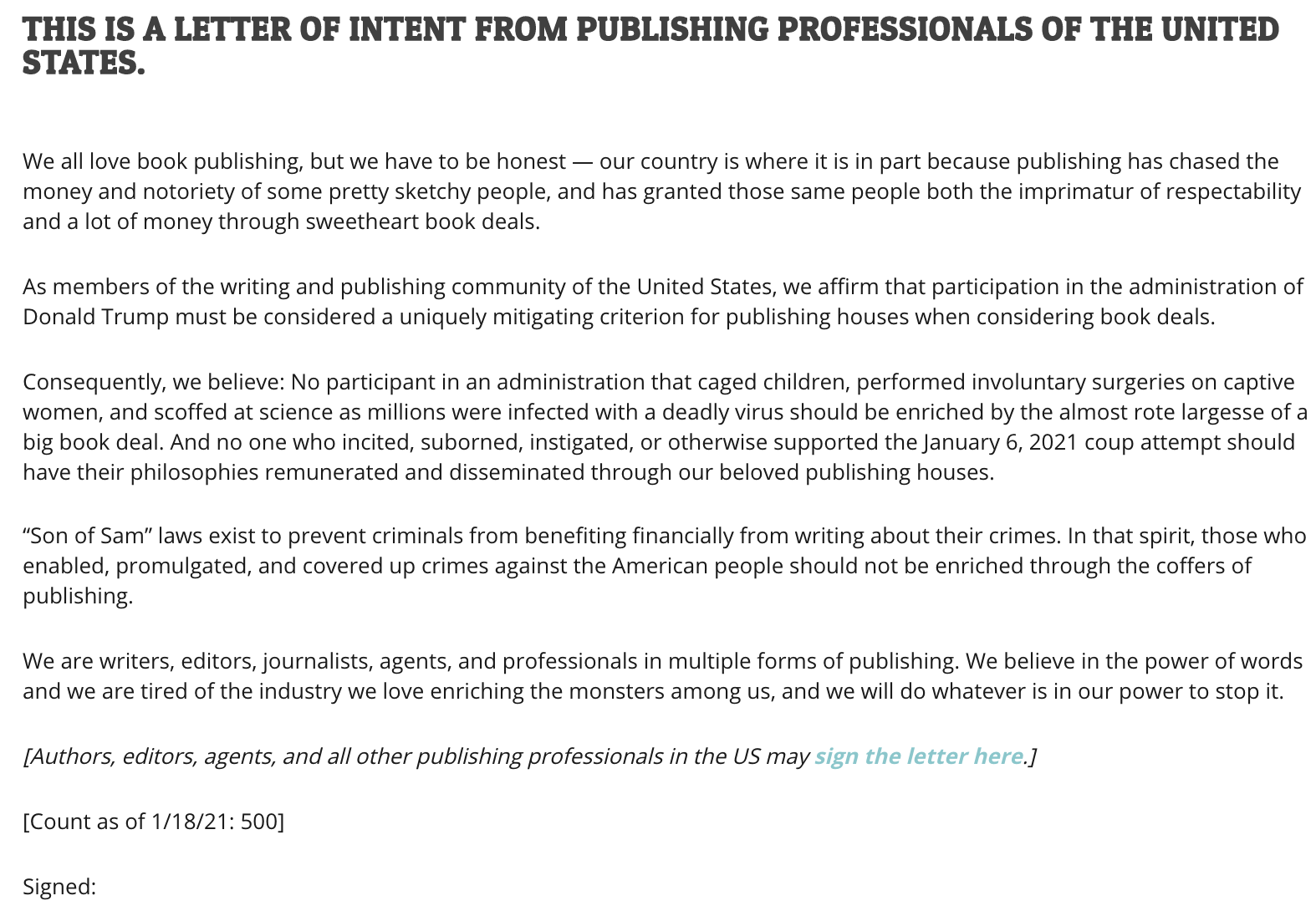 As I’ve said repeatedly, while publishers have the right to publish whatever books they want, and can reject books based on not just their content but their authors, this is completely unwarranted censorship of authors based on their politics. It means, of course, that not only do the signers oppose publishes accepting Trump’s memoirs, but books by anyone who was part of his administration, including Robert Mueller, Nikki Haley, Anthony Fauci (who did not “scoff at science”), Ben Carson, James Mattis, and so on.And not just books about Trump—books about anything.  (Don’t forget that Obama’s administration also “caged children” as well as killing civilians with drones.)

And it assumes that anybody who worked for the Trump administration agreed with all its policies, which is simply a lie.

This is an attempt to censor works by people who have political opinions different from yours. It is an attempt to silence those who disagree with you and to suppress their views. Beside that, it’s an attempt to punish people for being on the “wrong” side politically. Yet think of all the people who worked in the Trump administration and weren’t big fans of his. Some of these people, or even the “criminals” more closely aligned with Trump, may have worthwhile things to say and to hear.

This is an example of Woke Fascism: the worst behavior of the Authoritarian Left. They call anyone associated with the Trump administration a criminal, for those who were part of the administration are accused of “enabling, promulgating, and covering up crimes.” Talk about hyperbole!

I won’t reproduce the list of signers (I don’t recognize any of them), but here are some of the houses with Pecksniffian editors and employees. I’ll stop at the J’s:

I’ll stop now, but have to add that these people do not deserve their jobs in publishing—not when they decide to reject in advance books by anyone who was in the Trump administration. This bodes ill for the future of publishing, for these are reputable houses, and they control a lot of books who go to the public. It’s a metastasis of the cancer of Wokeism.

And if you respond, “Tough. These editors and authors did the right thing in trying to silence Republicans,” then I have no use for you. And I have only marginally more use for those who say, “Nobody’s entitled to a book deal; publishers are doing the right thing by ruling out a priori books by any of these people.” That is an extraordinarily punitive and close-minded point of view.

76 thoughts on “Publishers’ and authors’ manifesto: We won’t publish books by people who were in the Trump administration”