I haven’t found the latest few installments of Andrew Sullivan’s The Weekly Dish terribly exciting, and, truth be told, they haven’t been as thoughtful or engaging as his old tripartite column for New York Magazine. I know his readers enjoy the ability to publish their “dissents”, which is good, and like to guess “where was this photo taken?”, but I prefer his serious, longer-form pieces.

There’s only one such piece per week now, and this week’s is about Joe Biden. It’s pretty good, but I’m wondering if my $50 subscription was well spent. I’m hoping that, after the election, Sullivan will find new and interesting things to write about. I’m not giving up yet.

I think The Weekly Dish is now pay-only, but if you subscribe you can see the post by clicking on the screenshot below. I’ll give a few excerpts, but I have little to say about Sullivan’s take, which is fine but unoriginal.

Do note that this week’s podcast on Sam Harris’s Making Sense site, also reproduced on Sullivan’s page, is a 1.5-hour conversation between the two of them about Trump. I’ll probably listen to it since it’s relatively short for Sam (how can anyone listen to three hours of conversation?), so stay tuned.  If you subscribe to Andrew’s site, the podcast is free there, but if you don’t subscribe to Sam’s site you can listen to only an excerpt. I guess the serious media people on the Left have decided that, in the future, podcasts are the way to go. They’re more lucrative and also more spontaneous, but I’m happy to keep typing.

Sam says this about Andrew on the site:

[Sullivan] is writing a book on the future of Christianity, and his collection of essays will be published in 2021.

Christianity, eh? That should be interesting! 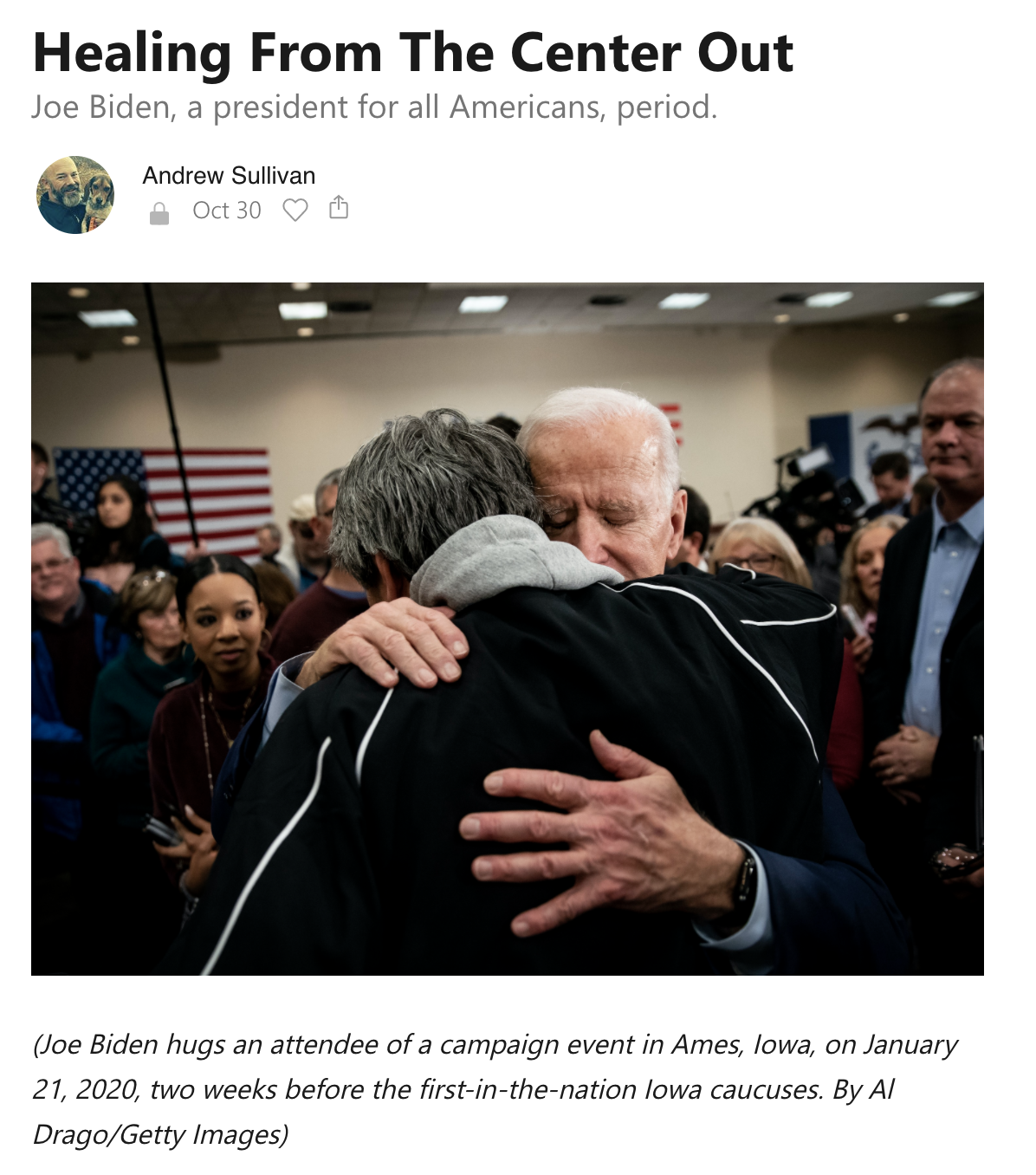 The main lesson from Sullivan’s piece is that Biden is not going to further wokeness in America, and that Uncle Joe turned out much better than Sullivan anticipated. Just a few excerpts:

. . . Biden’s core appeal, as he has occasionally insisted, is that he ran against the Democratic left, and won because of moderate and older black voters with their heads screwed on right. He was the least online candidate. For race-leftists like Jamelle Bouie, he was part of the problem: “For decades Biden gave liberal cover to white backlash.” For gender-warriors like Rebecca Traister, he was “a comforter of patriarchal impulses toward controlling women’s bodies.” Ben Smith a year and a half ago went for it: “His campaign is stumbling toward launch with all the hallmarks of a Jeb!-level catastrophe — a path that leads straight down … Joe Biden isn’t going to emerge from the 2020 campaign as the nominee. You already knew that.” The sheer smug of it! And the joy of seeing old Joe get the last laugh.

. . . His core message, which has been remarkably consistent, is not a divisive or partisan one. It is neither angry nor bitter. Despite mockery and scorn from some understandably embittered partisans, he has a hand still held out if Republicans want to cooperate. In this speech at Warm Springs, where Biden invoked the legacy of FDR, you can feel the Obama vibe, so alien to the woke: “Red states, blue states, Republicans, Democrats, Conservatives, and Liberals. I believe from the bottom of my heart, we can do it. People ask me, why are you so confident Joe? Because we are the United States of America.”

. . . What I grieve is an idea of America that is decent, generous, big-hearted, and pragmatic, where the identity of a citizen, unqualified, unhyphenated, is the only identity you need. I miss a public discourse where a president takes responsibility even for things beyond his full control, where the fault-lines of history are not mined for ammunition but for greater understanding, where, in Biden’s words, we can once again see the dignity in each other. I am not a fool, and know how hard this will be. But in this old man, with his muscle memory of what we have lost, and his ability to move and change in new ways, we have an unexpected gift.

Sullivan is a big believer, as I used to be, in America United—the possibility that someone could bring the ends of the political spectrum together and we’d be One Big Happy Country. While I fervently wish that were possible, and it’s my ideal as well (so long as the Happy Country is a liberal one!), I don’t think that it’s possible for Biden, or anyone, to Superglue the fractures in the American populace. Yes, we may well have a Democratic Senate, House, and President, and that means that things will get done, but don’t expect the evangelicals, the gun nuts, the anti-maskers, and others on the extreme right to come around. And, of course, we’re facing a Supreme Court that will fight liberalism at every turn.