It’s been over two years since I wrote about Linda Sarsour, the odious anti-Semite and ousted head of the Women’s March, and believe me, I don’t miss her. She used to feature on this site quite often (see the collection of posts here), but she’s not in the limelight any more—not after having “resigned” from (been ousted from, in my view) the Women’s March, in which she was one of the co-leaders who tarnished a worthy endeavor with her anti-Semitism and cozying up to Louis Farrakhan. For a while she was a Bernie Sanders “surrogate”, empowered to campaign on his behalf, but that ended when Bernie dropped out. Now she’s back in the campaign news, but not in a positive way.

And although The Daily Beast just reported that  Sarsour and Mallory were “back in the DNC’s good graces,” that doesn’t seem to be the case. Although Mallory spoke briefly at Monday’s DNC Black Caucus, Sarsour’s become a pariah in the DNC, at least according to this Yahoo News article, which seems to have been taken from the National Review and some Twitter statements by CNN correspondent Jake Tapper. (Tapper’s been concerned for years with the Women’s March connection to Farrakhan and the Nation of Islam.) 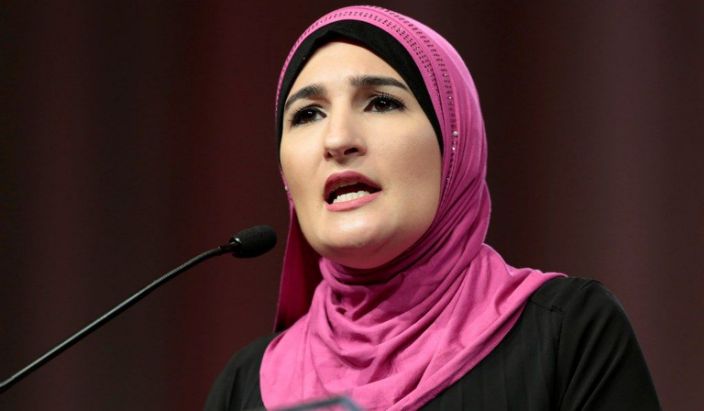 An excerpt from the Yahoo report (I’ve added a link to Jake Tapper’s tweets), which itself links to the and the Democratic platform, including its views on Israel. The best part is the Biden campaign’s statement that she has “no role whatsoever” in their push for the White House (my emphasis):

Democratic presidential nominee Joe Biden condemned the views of former Women’s March co-chair Linda Sarsour, who has been repeatedly accused of anti-Semitism, after she participated in a Democratic National Convention council meeting on Tuesday.

Sarsour, a Muslim activist who endorsed Biden after he announced Senator Kamala Harris (D., Calif.) as his running mate last week, spoke at the DNC’s “Muslim Delegates and Allies Assembly” on Tuesday, sparking disapproval in light of her history of controversial comments on Jews and Israel.

“Joe Biden has been a strong supporter of Israel and a vehement opponent of anti-Semitism his entire life, and he obviously condemns her views and opposes BDS, as does the Democratic platform,” Biden spokesman Andrew Bates said, according to CNN’s Jake Tapper. “She has no role in the Biden campaign whatsoever.”

Bates then pointed out that the official Democratic platform says, “We oppose any effort to unfairly single out and delegitimize Israel, including at the United Nations or through the Boycott, Divestment, and Sanctions Movement.”

I was pleased to see that the Democratic platform is not only anti-BDS, but favors a negotiated two-state solution to the Israel/Palestine conflict, which is my view as well. (Nobody thinks that’s going to be easy!) Here’s what the platform says:

Democrats believe a strong, secure, and democratic Israel is vital to the interests of the United States. Our commitment to Israel’s security, its qualitative military edge, its right to defend itself, and the 2016 Memorandum of Understanding is ironclad. Democrats recognize the worth of every Israeli and every Palestinian. That’s why we will work to help bring to an end a conflict that has brought so much pain to so many. We support a negotiated two-state solution that ensures Israel’s future as a Jewish and democratic state with recognized borders and upholds the right of Palestinians to live in freedom and security in a viable state of their own. Democrats oppose any unilateral steps by either side—including annexation—that undermine prospects for two states. Democrats will continue to stand against incitement and terror. We oppose settlement expansion. We believe that while Jerusalem is a matter for final status negotiations, it should remain the capital of Israel, an undivided city accessible to people of all faiths. Democrats will restore U.S.-Palestinian diplomatic ties and critical assistance to the Palestinian people in the West Bank and Gaza, consistent with U.S. law. We oppose any effort to unfairly single out and delegitimize Israel, including at the United Nations or through the Boycott, Divestment, and Sanctions Movement, while protecting the Constitutional right of our citizens to free speech.

The swipe at the United Nations, whose behavior towards Israel has been unfair, biased, and unconscionable, is especially welcome.  A lot of “progressive” Democrats won’t endorse that part of the platform (AOC and the “squad,” for instance), but I agree with nearly all of it.

At any rate, Sarsour isn’t exactly a big booster of the Democratic ticket, at least according to the New York Post:

Once she finally did, the progressive’s endorsement was less than enthusiastic.

“It’s no secret that I have disagreements with both VP Joe Biden & Senator Kamala Harris. But I know what I need to do – Elect the Biden-Harris ticket and prepare to hold them accountable in the White House,” she wrote on Twitter after the announcement.

After Sarsour was seen participating in the convention event Tuesday, Team Biden was quick to note that she was not involved in the former vice president’s presidential bid.

Sarsour appeared to take offense to the Bates comment and the Biden campaign’s rejection of her.

“@AndrewBatesNC, just came here to remind you that you need a coalition to defeat Donald Trump and that Muslim Americans are an important voter bloc in key states like Michigan, Wisconsin, Virginia, Texas, Pennsylvania & I know a little something about how to organize them,” she said.

Well, that’s a bit of a threat. “Nice victory you have brewing, Joe and Kamala. It would be a shame if anything would happen to it.” Sarsour has always had political ambitions, and sees herself, I think, as the Muslim-American version of Alexandria Ocasio-Cortez. The more distance the DNC puts between itself and Sarsour (and Mallory as well), the better.