After both Tablet and and the New York Times exposed the anti-Semitism present among some Women’s March (WM) leaders dating from the group’s formation in 2016, the organization has been racked with disunity and discontent. None of the leaders, including Linda Sarsour, Tamika Mallory, Carmen Perez, and Bob Bland, were free from the taint of anti-Semitism, and I wrote a bunch of posts on the organization, urging that they dump these leaders in the cause of unity.

Well, that’s finally happened. As the New York Times (below) and Washington Post report, three of the four leaders (Perez is the exception) have “resigned”, though I suspect they were nudged to resign, since none of them previously showed any desire to leave in the face of criticism. (The official WM announcement is here.)

The organization said in a statement that their terms expired and that 17 new board members had been appointed after a national search.

Their departure, earlier reported by The Washington Post, follows complaints from some local women’s march leaders that the New York-based group was too insular to lead a national movement. It comes after two of the earliest organizers of the march on Washington accused Ms. Mallory and a fourth co-chair, Carmen Perez-Jordan, of making anti-Semitic remarks.

. . . The group angered some activists in other parts of the country when members tried to trademark the name Women’s March in the wake of the 2017 march, which was put together by loosely connected volunteers, many of whom found one another on Facebook.

. . .Ms. Mallory’s close ties to the Nation of Islam leader Louis Farrakhan, who is respected in the black community, but is widely reviled in the Jewish community for virulently anti-Semitic remarks, had long raised eyebrows in New York.

The accusations, made public before the 2019 march, heightened a sense of infighting. In some cities, including New York and Philadelphia, two separate women’s marches were held.

There are many new board members, and nobody can accuse the WM of not being diverse. From the Post:

A diverse cast of 16 new board members that includes three Jewish women, a transgender woman, a former legislator, two religious leaders and a member of the Oglala tribe of the Lakota nation will inherit an organization recovering from a failed attempt to trademark the Women’s March name and fractured relationships with local activist groups and the Jewish community.

• Samia Assed, a Palestinian American activist from New Mexico who serves on the board of the Albuquerque Center for Peace and Justice and leads the organization’s New Mexico chapter.

• Zahra Billoo, a civil rights attorney and executive director of the San Francisco Bay area chapter of the Council on American-Islamic Relations.

• Mrinalini Chakraborty, executive director of Men4Choice, who has been a Women’s March organizer and national field director, and founded Women’s March Illinois.

• Rabbi Tamara Cohen, who runs innovation for Moving Traditions, a national organization focused on teens and gender and Jewish identity, who spearheaded the creation of Tzelem, a group for transgender and non-binary youth.

• The Rev. T. Sheri Dickerson, a co-founder of Black Lives Matter in Oklahoma.

• Sarah Eagle Heart, a member of the Oglala Lakota Nation of the Pine Ridge Indian Reservation in South Dakota and the former CEO of Native Americans in Philanthropy.

• Lucy Flores, a former Democratic state assemblywoman from Nevada who made headlines this year for accusing former vice president Joe Biden of inappropriate touching. She lives in Los Angeles, where she runs Luz Collective, an organization focused on empowering Latinas.

• Ginny Goldman, a political strategist who founded the Texas Organizing Project in Houston.

• Ginna Green, who runs the strategy arm of liberal Jewish group Bend the Arc and was among a group of Jewish women to lead the 2019 Women’s March on Washington.

• Shawna Knipper, an advocate for organ transplants who received a kidney donation in 2014 and an organizer with Women’s March Pennsylvania.

• Isa Noyola, a Latina transgender activist who serves as deputy director for Mijente, a national grass-roots hub for activism in the Latino community. She is the former deputy director of the Transgender Law Center and in 2015 organized the first national protest of violence against transgender people.

• Kelley Robinson of the District, who serves as Planned Parenthood’s national organizing director.

• Rinku Sen, an Indian American writer and civil rights activist who is the former executive director of racial-justice group Race Forward and publisher of Colorlines.com.

• Leslie Templeton, a youth activist who has focused on disability, health care and drug policy and has served on the Women’s March Disability Caucus.

Among these, only Billoo (who works for the Council on American-Islamic Relations) poses a potential problem, as she has a history of pretty strong anti-Israel and anti-Zionist (ergo anti-Semitic) remarks, which you can see in this article from the Jewish Telegraphic Agency:

I suspect that any of the previous anti-Semitic shenanigans by the WM will be forestalled this time by the Jews on the board, who include a rabbi.

The bad news is that, according to several sources, including the Jerusalem Post (click on screenshot below), Linda Sarsour, whom I regard as an anti-Semite and an Islamist sotto voce, has been chosen by Bernie Sanders as a “surrogate”. What’s that? According to the Jerusalem Post, it’s “another politician, celebrity or person of influence, campaigning on a candidate’s behalf.” 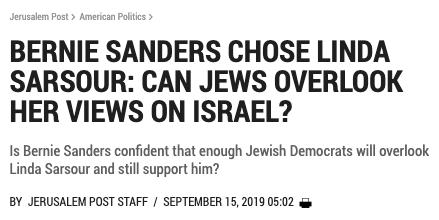 Sanders appears to be like me: a nonbelieving Jew, and that will garner some of the Jewish vote in 2020. But using Sarsour as a surrogate, while not a good way to get votes from Jews (we know what she’s about), may be a good way to get votes from the anti-Israel Left. This choice alone is enough to make me not vote for Sanders in a primary (I would of course vote for him if he ran against Trump), but I don’t think there’s much chance of Bernie being a Presidential candidate next year.

In the meantime, Sarsour is already acting as a surrogate:

"I would be so proud to win, but also to make history and elect the first Jewish American president this country has ever seen and for his name to be Bernard Sanders." –@lsarsour pic.twitter.com/INPRlvmMur

21 thoughts on “The good news and the bad: Sarsour, Mallory, and Bland out as Women’s March leaders, but Sarsour in as a Bernie Sanders “surrogate””