Good morning on Wednesday, April 15, 2020: TAX DEADLINE in the U.S. If you’re hoping for that $1200 Pandemic Reparation, you’d better file by midnight! (Actually, they’ve pushed the deadline back to July 15, but if you want that dosh it’s best to file now.)

It’s snowing in Chicago, and will be cold for several days. I’m worried about my two nesting mallard hens.

As for food, it’s National Ham Day, which of course means that Jews and Muslims are erased as Americans on this day. My entire existence has been nullified with this day that’s both Islamophobic and anti-Semitic. Ham Day in fact makes me feel unsafe, for it’s violence.

The third Wednesday in April is also National Banana Day.

It’s Jackie Robinson Day, honoring the first African-American to play in major league baseball; Robinson started at first base for the Brooklyn Dodgers on April 15, 1947, and of course wound up in the Baseball Hall of Fame (see video below).  Other holidays include McDonald’s Day (Ray Kroc opened the first franchised McD’s in Des Plaines, Illinois on April 14, 1955), World Art Day, and, for curmudgeons like Matthew and me, National Griper’s Day and National That Sucks Day.  Both holidays have interesting origins. For example, here’s National Griper’s Day:

National Griper’s Day was created in 1984 by Jack Gilbert, a freelance writer from Columbus, Ohio, in an effort “to give the disgruntled, disappointed and depressed a new audience.” He thought the creation of the day would help encourage and bring back “old-time personal communication” and “get people to feeling like people again and not afraid of high technology and computers and all that stuff.”

Gilbert published his name, phone number, and address so that people could call him up to gripe. “If I am right that it’s becoming more and more difficult to have people listen to you, the whole idea of having people call is good,” he said. During the first year, people called Gilbert to complain about topics such as consumer costs, space garbage, weather damage, unemployment, and chemicals in food.

Gilbert also said that in the first year some schools, taverns, and communities brought people together to create “griper’s corners,” bulletin boards where complaints were aired. Gilbert got the inspiration for these after stopping at a Speakers’ Corner in London, a spot where soap-box orators are listened to. It was also Gilbert’s hope that small communities would designate the day and have people gather together in their parks.

About the second holiday you can read this:

Bruce Novotny of the website That Sucks created National That Sucks Day after he noticed that April 15 has been an unfortunate day throughout history. It is the date of when President Lincoln died in 1865 after being shot the previous evening at Ford’s Theatre, and it is the date of when the RMS Titanic sank in 1912 after hitting an iceberg the previous night. April 15 is also usually Tax Day. As these things are all considered to suck, Bruce Novotny thought April 15 was an appropriate day to hold National That Sucks Day.

News of the day: The death toll from Covid-19 now stands at 26,061 in the U.S. and  126,681 throughout the world.  And Trump’s behavior gets more erratic: he’s stopped U.S. funding for the World Health Organization (we contribute a bit more than 12% to their coffers) in a lame attempt to put all the blame on them for the pandemic. While Trump claimed just a day or so ago that he had sole power to “re-open” America, he’s walked that back after governors said they’d oppose him and lawyers said his stand was unconstitutional.

But perhaps things are looking up. When I made my daily latte a few minutes ago a propitious pattern formed, purely by accident!: 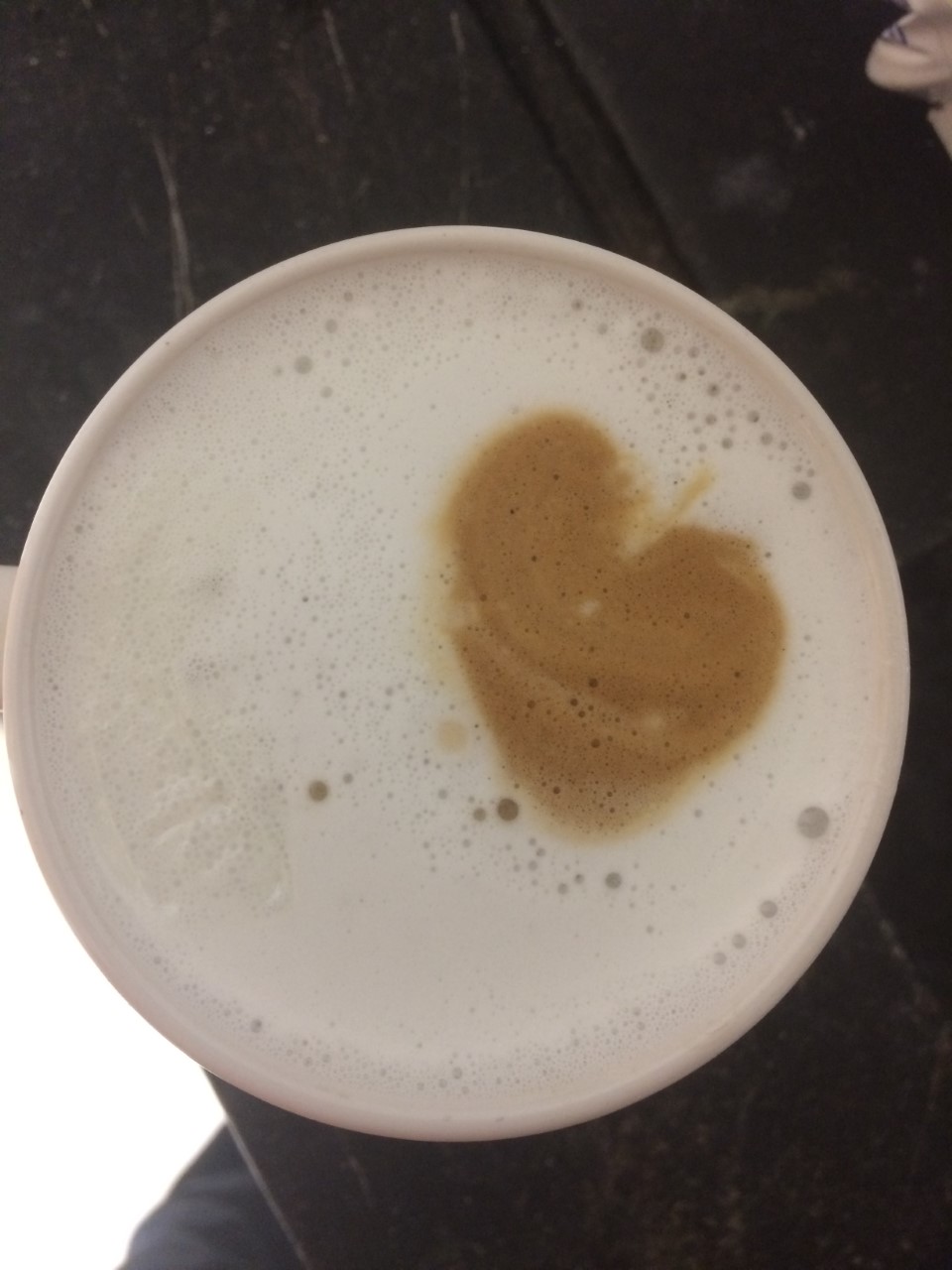 Stuff that happened on April 15 includes this (note that most of these do indeed suck but there’s also some good news):

Arrested for murder during the robbery, Sacco and Vanzetti, who were atheistic anarchists, pleaded not guilty, and their conviction was a travesty of justice. They were electrocuted 7 years after the crime: August 23, 1927. Here’s a photo with the Wikipedia caption:

This is where Anne Frank and her sister died. The Allies found 60,000 inmates, most seriously ill, many from typhus and gastroenteritis. The conditions were indescribable: read about them here.

Here’s a short video of Robin’s debut in the major leagues:

And here’s the first franchised McDonalds, not far from here, though it no longer exists: 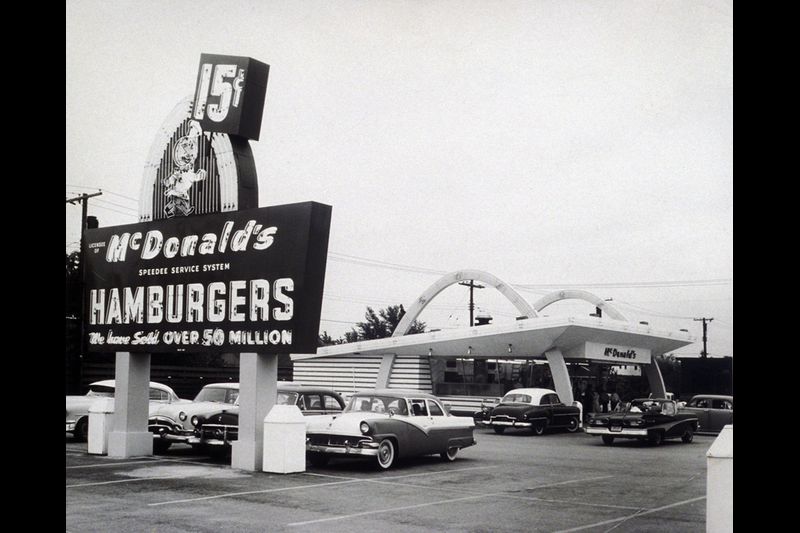 Most Americans don’t know about this, but nearly all Brits do. Here’s a short documentary from the BBC: 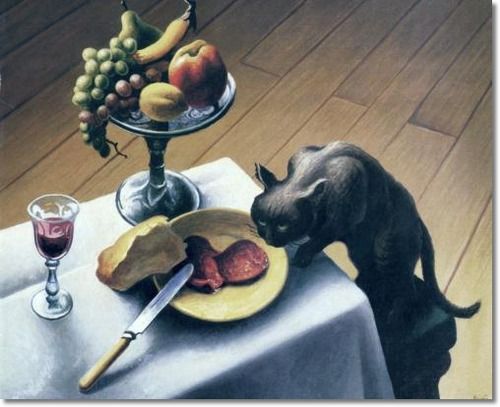 Those who gave up the ghost on April 15 include these notables:

Meanwhile in Dobrzyn, Hili is very pensive, for, along with the rest of us, she’s in the dark about how and when “normalcy” will happen:

A: What are you thinking about?
Hili: I’m trying to imagine the world after the pandemic. 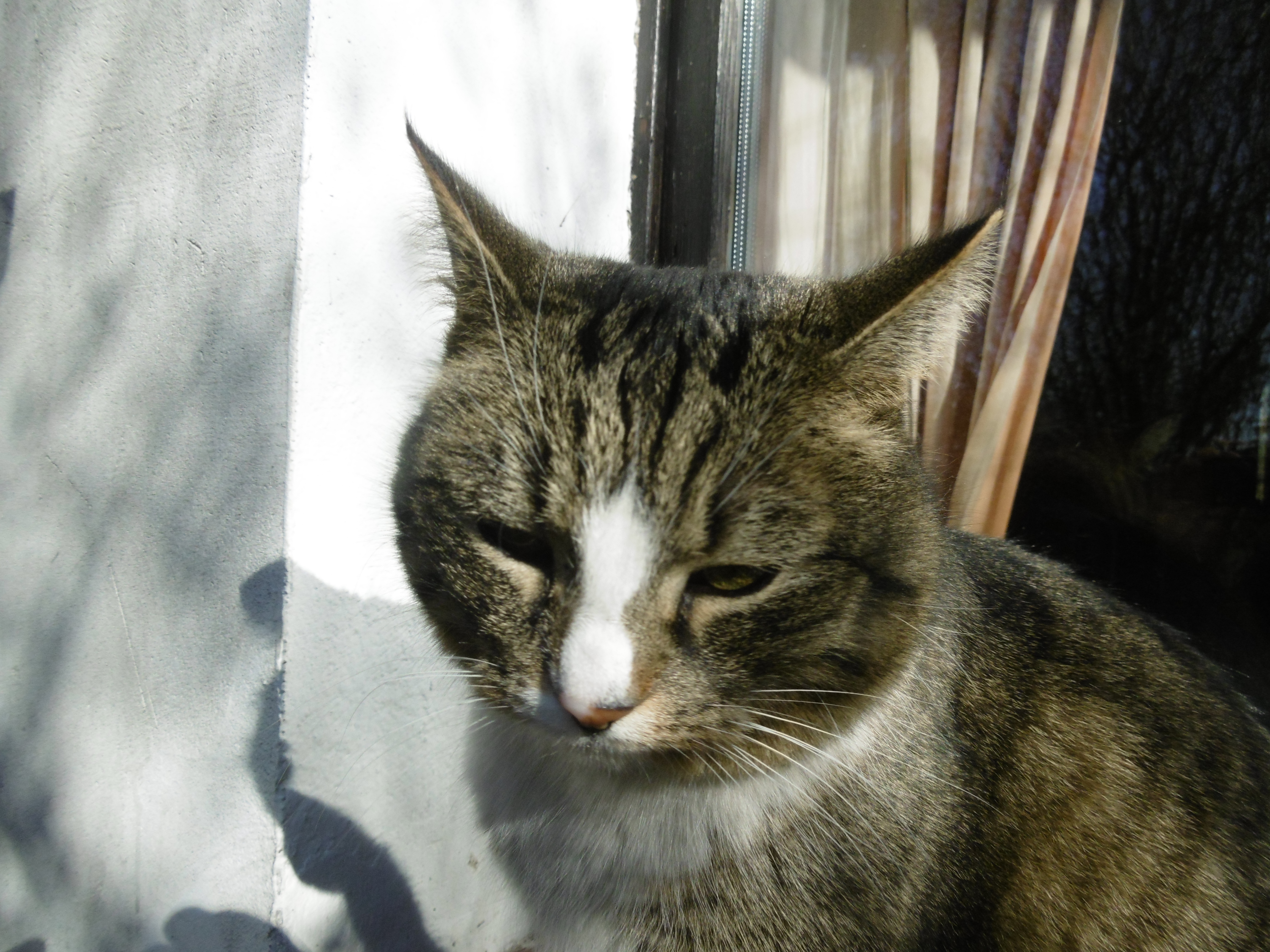 Nearby, Leon, restive from the lockdown in Poland, dreams of his walks last year, and puts up an old picture.

Leon: I’m yearning to be in the forest!

Reader Paul sent a beautiful duck painting called “Just hatched”, by Robert Fuller, whom Paul describes as a “local Yorkshire artist.” Given the quality of his work, he certainly deserves more than just “local” fame. This one was on his Facebook page and it’s lovely (you can buy prints here). I think Honey will have a brood of eight as well. 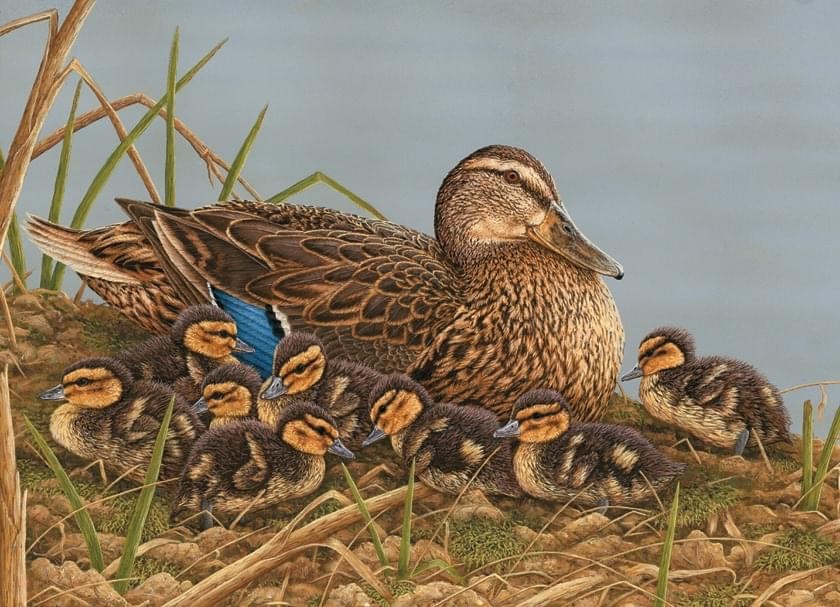 From somewhere on the Internet, ducks in tutus. 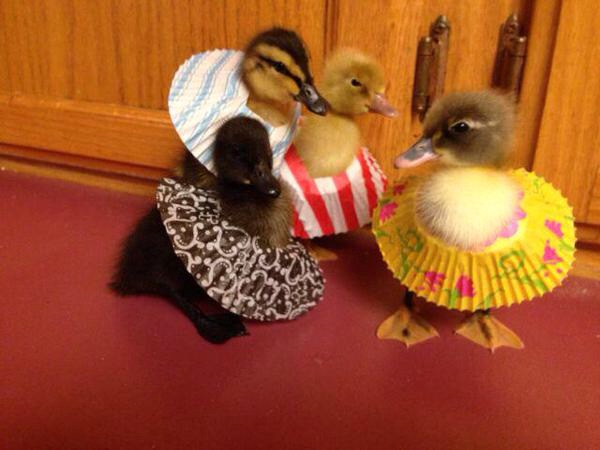 A mock book from The Purrfect Feline Page: 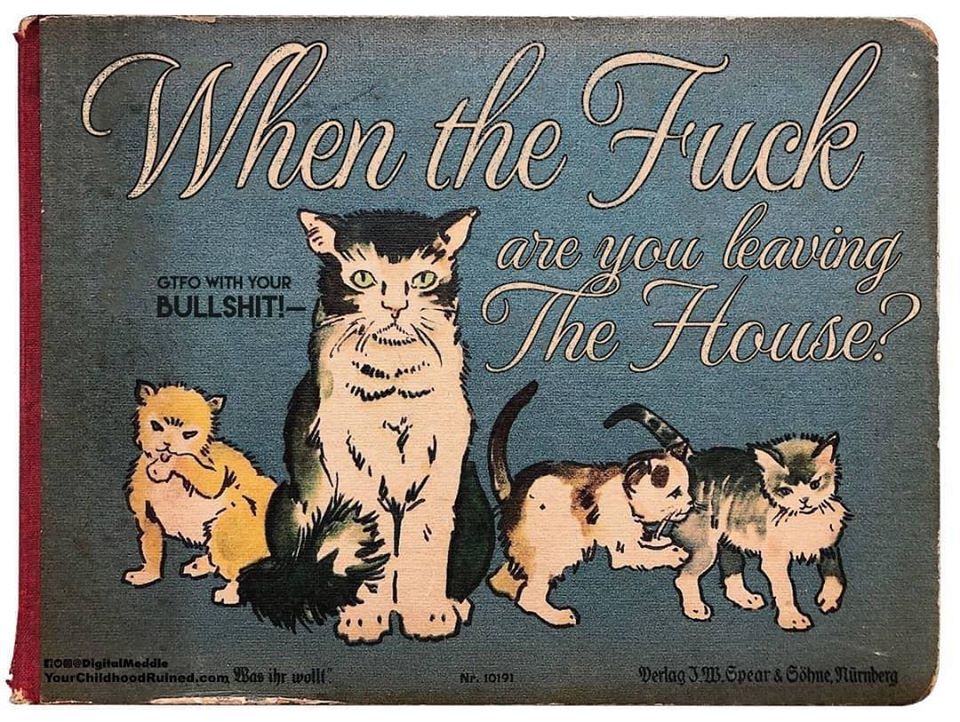 If you read the link to this article highlighted by Titania, you’ll see that the Canadian Army in fact requires the use of “they/them/their” in personnel reports, which MIGHT NOT BE the person’s preferred pronoun. Shame on Canada!

All armies should follow Canada’s lead and ban the use of gender specific pronouns for military personnel.

No amount of combat training can take away the fear of being misgendered.https://t.co/AlQ1ptjLvk

From reader Barry. This is a lovely haul for a dung beetle and, as Barry says, will make a meal that will last for weeks.

Tweets from Matthew. He’s working on his next book, which is about biotechnology involving genetics, and caught this un-prescient statement in Nature:

December 1969, long @Nature editorial ticking off the “doomsdaymen” who worried about the dangers of genetic engineering and singing the praises of technology. Unfortunately, to bolster his case about making a fuss about nothing, the editor included this gem about CO2 levels: pic.twitter.com/I4DINPvhpF

Big stars muff their lines. The first one, with Bette Davis, is great. What a potty mouth!

Do you see any invertebrates here? I don’t, but it’s ghoulish anyway:

In 1679 bishop Winstrup died and was buried in the Lund Cathedral. In 2014 the coffin was opened, revealing a remarkably conserved bishop and burial material. My colleagues at @LundMuseum have here looked at the invertebrate remains in the grave! https://t.co/1NVgtocRna pic.twitter.com/R6X01nwE6D

Of this one Matthew remarked, “He could have done this just on the 40 miles between Manchester and Liverpool, where the accent changes every couple of miles (srsly).”

An amazing demonstration of the skill of Andrew Jack, who died of the coronavirus in March. His accent changes in real time.https://t.co/qhwK1BlF2k

A fine demonstration of how people amuse themselves in lockdown. You will, of course, watch to the end (sound up).

A nice visible demonstration of gravity:

Saturn's moon Prometheus tugging streamers of icy material out of the F ring as it orbits pic.twitter.com/sLehQEVbyi