Reader Ken called my attention to a Guardian article reporting that Florida’s governor Republican governor Ron DeSantis (a Republican, of course) had deemed “professional wrestling”—a “sport” that is fake and scripted—to be an “essential service”. It was banned under the original lockdown, but the good governor changed his mind. As the Guardian reports:

In an order signed on Thursday, the Florida Division of Emergency Management ruled that essential services now include “employees at a professional sports and media production with a national audience – including any athletes, entertainers, production team, executive team, media team and any others necessary to facilitate including services supporting such production – only if the location is closed to the general public”.

A spokesperson for DeSantis’s office told ESPN such services are “critical” to Florida’s economy. WWE started to run live shows, without an audience, on Monday.

WWE is “World Wrestling Entertainment“, a multimedia company. Frankly, I don’t understand the appeal of fake wrestling, but many people love it—apparently a lot of them in Florida.  Well, at least there’s no live audience. But the wrestlers still violate social distancing, of course. (I wonder if they’re tested for the virus).

At any rate, the BBC and The Nation confirm this report, and you can see The Nation‘s article by clicking on the screenshot below 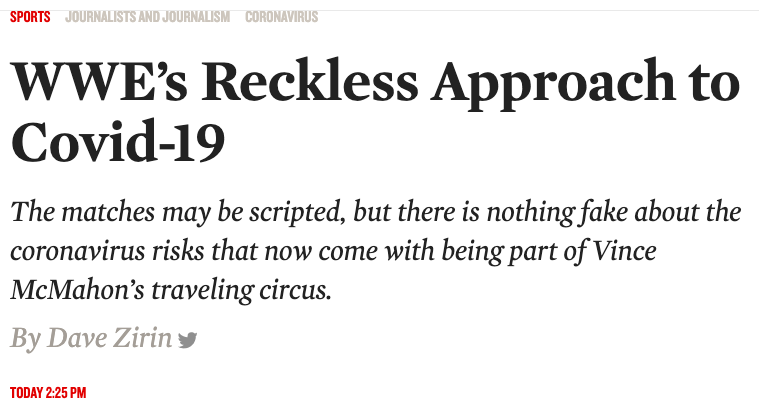 Now why would this gaudy spectacle be deemed an “essential service”. No other sport is, and this isn’t even a sport. Why is “wrestling” considered essential for Florida’s economy while Disneyland, restaurants, and SeaWorld Orlando are not?  Could it be because the CEO, chairman, and majority stockholder of WWE is Vince McMahon, a pal of Donald Trump? As Wikipedia notes,

McMahon and his wife have donated to various Republican Party causes, including $1 million in 2014 to federal candidates and political action committees, such as Karl Rove’s American Crossroads and the research and tracking group America Rising.The McMahons have donated $5 million to Donald Trump’s charity, the Donald J. Trump Foundation.

His wife Linda also happens to be the former head of the Small Business Administration under Trump.

The Nation calls this a “scandal”, pulling out all the stops in its snarky report, which includes this:

Even more fitting for this scandal-ridden company is that the decision to go to live-event programing comes after news this weekend that an unnamed on-air personality has tested positive for Covid-19. The company was quick to assert that this employee infected nobody, never had contact with anyone, and that everything was completely fine—nothing to see here. But there’s no reason to take anything WWE says at face value. McMahon’s care for his workforce is legendarily abhorrent, with a staggering death toll among its stars over the decades due to drugs, suicide, and one in-ring disaster. If any other sport had WWE’s body count, there would be congressional panels decrying its existence.

In addition, McMahon is taking advantage of Florida’s lax laws concerning Covid-19, enacted by their blithering goon of a governor, Ron DeSantis. WWE will be filming its live shows in the corrupt sinkhole of Orlando, where McMahon has received an “essential business” label from the friendly Florida government. It would be difficult to imagine anywhere more dangerous outside of New York for WWE to set up shop. As Alex Nazaryan of Yahoo News tweeted, “Florida now has twice as many coronavirus cases (20,601) as South Korea (10,537). About 30 million more people live in South Korea than in Florida.”

It’s difficult to imagine a more rancid and more dangerous cross-pollination than that of Trump, DeSantis, and the WWE. Sure enough, the same day that McMahon announced that WWE would be doing live tapings in Florida, former Trump cabinet official Linda McMahon’s (former WWE executive and Vince’s spouse, of course) committed her Trump reelection PAC to spending $18.5 million in Florida in 2020.

Well, I doubt we’ll ever know all the connections here, but Florida’s virus-loving governor, who refused to close down the state for so long, is beholden to Trump, and I’m guessing this decision was made after a Trump acolyte gave DeSantis a quiet word. Whatever happened, this glaring exception to the lockdown needs a good explanation.

47 thoughts on “Fake wrestling deemed by Florida’s government to be an “essential service”. But why? Could it be. . . . Trump?”