Today we have an article by Nick Cohen to read, a panegyric by Andrew Sullivan, and an epidemiological website to peruse and fret about. Cohen and Sullivan worry that, although Trump’s response to the viral pandemic has been erratic, hamhanded, and even duplicitous, the Prez could come out of this even stronger. (I predicted the opposite, but what do I know?)

First, a piece by Nick Cohen in the Guardian (is there an American equivalent of this liberal journalist who doesn’t fall prey to wokeness?). Click on the screenshot to read (h/t Jeremy):

Cohen argues, correctly, that both Boris Johnson and Donald Trump, the former described as a “clown in a morgue” and the latter as a “cornered conman,” have grossly mishandled the pandemic, with Trump’s behavior being describe as “close to criminal.” I, for one, have never seen such an blatant display of ignorance, waffling, and lying from a President (including Nixon), and I’m counting on the fact that even benighted Americans can see through Trump’s woeful performance. When they start losing their jobs and the stock market tanks, then Trump loses the only substantial card he had: the economy was doing well. That’s why I bet $100 that he’d lose in November, though most readers seemed to think that was a bad bet.

Cohen goes on to claim that Trump might save his popularity via populism: blaming the virus on the Chinese and thus arousing “America first” sentiments and intensifying the culture wars. A few excerpts:

Instead, an escape attempt began with the right-wing deploying the language policing it so often deplores on the politically correct left. Trump is now insisting that coronavirus should not be called coronavirus but “Chinese virus”.

The side benefits he could expect to bank ought to be obvious. Trump could count on US liberals playing his game by accusing him of being an anti-Chinese racist. Liberals duly walked into the trap and Trump’s supporters were transported from the fear of living in an unprepared country with a demonstrably inadequate leader to the familiar ground of culture war. They could mutter: “Oh, these people call everything they don’t like racist; they’ll be saying it’s racist to call Chinese food ‘Chinese’ next.”

. . . However much critics may want to say Trump is a semi-senile fool – and I do – it is worth remembering that he remains a brilliant political operator, who has destroyed all opponents within and without the Republican party who made the mistake of underestimating him. In this instance his cleverness, and the major benefit he expects to enjoy, lies in shifting the blame for his folly on to the Chinese.

And this is unbelievable:

It does not stop there. If the virus is China’s fault, then domestic critics of his administration are traitors aiding the Chinese communists. You think I’m exaggerating? On 16 March, Trump tweeted a link to an article on the paranoid Federalist site. The author, one Madeline Osburn, was explicit. The Atlantic, a serious American magazine, had joined “China’s anti-American disinformation efforts”, she said. Osburn, who would have had a glittering career on the People’s Daily if she had been born Chinese, cited the work of The Atlantic’s Anne Applebaum, without appearing to know that Applebaum has written two devastating histories of the atrocities of communism. Describing how the pandemic has exposed America’s weaknesses in general, and its president’s weaknesses in particular, made Applebaum a useful idiot at best and traitor at worst, Osburn said.

Well, the “Trump tweeted a link” goes not to Trump but to a tweet by Mark Levin, a conservative commenter, but the article in the Federalist takes us back to the days of McCarthy-ite Red-baiting. Cohen goes on to somewhat extol Trump’s cleverness in deflecting his own incompetence onto the Chinese, and criticizing journalists for “siding with China.” In the end, Cohen is less certain than I about the effect of Trump’s competence on his electability come November. But I’m hoping that America’s pocketbook will outweigh its jingoism.

The hope that events will justify your beliefs is an ineradicable delusion. Surely, now the British will see through Johnson, liberals say, rather than blindly rally to his government in a time of crisis. Surely, the Americans will toss Trump on the scrap heap in November. But political battles do not win themselves. Democrats still have to unseat a sitting president – a feat they have not managed since 1992. Labour still has to turn itself from a serial election-loser into an election-winning machine. As the US shows, coronavirus can become the “China virus”. And what seems an irrefutable argument for a comprehensive welfare state can become an excuse for nationalist tricksters to wrap themselves in their tattered flags.

My own reading of the press, both right and left, doesn’t show this kind of “Chinese excuse”, at least in the U.S., but readers here aren’t so sanguine. My bet is that as the pandemic continues, lasting longer than our public officials are telling us, Trump’s popularity rating will fall, and come November we’ll have Biden in the White House. You may not be elated at that prospect (I’m not), but it sure beats the hamburger-fed tuchas now sitting there.

Every Friday, reader Simon sends me a link to Andrew Sullivan’s weekly column, and every Friday I read it, for Sullivan, however you feel about him, is a man worth reading. His latest, replacing his usual tripartite column, is a meditation on the pandemic—especially poignant because Sullivan (who is HIV positive) lived through the AIDS epidemic of the Eighties. Click on the screenshot to read:

According to Sullivan, the “plague of AIDS” changed people in many ways: making some fearful, others resolute and compassionate, and showing “whom you can trust and whom you can’t, and also reveals what matters.” It also brought gay rights, for which we have no equivalent with coronavirus—except, perhaps, a fix of the healthcare system and greater readiness to deal with these emergencies.

Mourning the lose of closeness (Sullivan says it’s been two weeks since he got a hug), he also tries to find the silver lining, which isn’t all that convincing to me, much as I want to find good in the bad. But there’s no law of nature—only the feel-good homilies of faith—that says that tragedy will be compensated with joy. Perhaps it’s because of Andrew’s Catholicism that he feels this way, and indeed, he gives a shout-out to religion:

Good will happen too. Surely it will. The silence in the streets portends something new. The other day, I realized I’d been texting a lot less and calling a lot more. I wanted to make sure my friends and family were okay, and I needed to see their faces and hear their voices to be reassured. As we withdraw from each other in the flesh, we may begin to appreciate better what we had until so recently: friendship and love made manifest by being together, simple gifts like a shared joint, a head resting on your shoulder, a hand squeezed, a toast raised. And in this sudden stop, we will also hear the sounds of nature — as our economic machine pauses for a moment and the contest for status or fame or money is canceled for just a while. “All of humanity’s problems stem from man’s inability to sit quietly in a room alone,” Pascal said. Well, we’ll be able to test that now, won’t we?

These weeks of confinement can be seen also, it seems to me, as weeks of a national retreat, a chance to reset and rethink our lives, to ponder their fragility. I learned one thing in my 20s and 30s in the AIDS epidemic: Living in a plague is just an intensified way of living. It merely unveils the radical uncertainty of life that is already here, and puts it into far sharper focus. We will all die one day, and we will almost all get sick at some point in our lives; none of this makes sense on its own (especially the dying part). The trick, as the great religions teach us, is counterintuitive: not to seize control, but to gain some balance and even serenity in absorbing what you can’t. [JAC: That, by the way, is taught not just by religions but also by philosophies like Stoicism. “Don’t sweat the small stuff” is not a religious homily.]

All fine and good, but if we were God and could have stopped the plague (clearly an issue for theologians who must explain why he didn’t), we would have. The loss of lives cannot be outweighed by a slight increase in the quality of lives that remain. And the lessons learned about life’s fragility, as when you survive a medical crisis, are often forgotten quickly, and it’s back to business as usual.

Finally, Andrew doesn’t see Trump’s incompetence during this time as having doomed his political prospects, but for reasons different from those given by Cohen:

But a lot is at stake, and I suspect that those who think COVID-19 all but kills Donald Trump’s reelection prospects are being, as usual, too optimistic. National crises, even when handled at this level of incompetence and deceit, can, over time, galvanize public support for a national leader. As Trump instinctually finds a way to identify the virus as “foreign,” he will draw on these lizard-brain impulses, and in a time of fear, offer the balm of certainty to his cult and beyond. It’s the final bonding: blind support for the leader even at the risk of your own sickness and death. And in emergencies, quibbling, persistent political opposition is always on the defense, and often unpopular. It requires pointing out bad news in desperate times; and that, though essential, is rarely popular.

Watching Fox News operate in real time in ways Orwell described so brilliantly in Nineteen Eighty-Four — compare “We had always been at war with Eastasia” with “I’ve felt that it was a pandemic long before it was called a pandemic” —  you’d be a fool not to see the potential for the Republican right to use this plague for whatever end they want. If Trump moves to the left of the Democrats in handing out big non-means-tested cash payments, and provides a stimulus far bigger than Obama’s, no Republican will cavil. And since no sane person wants the war on COVID-19 to fail, we will have to wish that the president succeed. Pulling this off as an opposition party, while winning back the White House, will require a political deftness I don’t exactly see in abundance among today’s Democrats.

Finally, as if you need another reason to be depressed (I’m watching the evening news through my palms, but my hands are clean), reader Charles sent me this ProPublica guide to the readiness of American hospitals to deal with coronavirus.

As Charles wrote, the source seems reputable: “The infection rate scenarios are based on estimates from leading epidemiologist Dr. Marc Lipsitch, head of the Harvard T.H. Chan School of Public Health’s Center for Communicable Disease Dynamics, who made the projections of how many people globally would be infected.”

The metric is what percentage of hospital beds would be filled (from 0% to over 200%) under all nine permutations of infection rate and time: 20%, 40%, and 60% of American infected, combined with those infection rates occurring over 6 months, 12 months, and 18 months. Here’s the scenario for 18 months; you don’t want to look at the others! Anything that is yellow is bad, indicating 100% hospital-bed occupancy. And it’s almost certain that at least 20% of Americans will become infected.

You can also enter your locality and see how ready the hospitals around you are. This is for Chicago. Only under the most optimistic scenario will we not fill more than 100% of the hospital beds. The red line is full capacity. 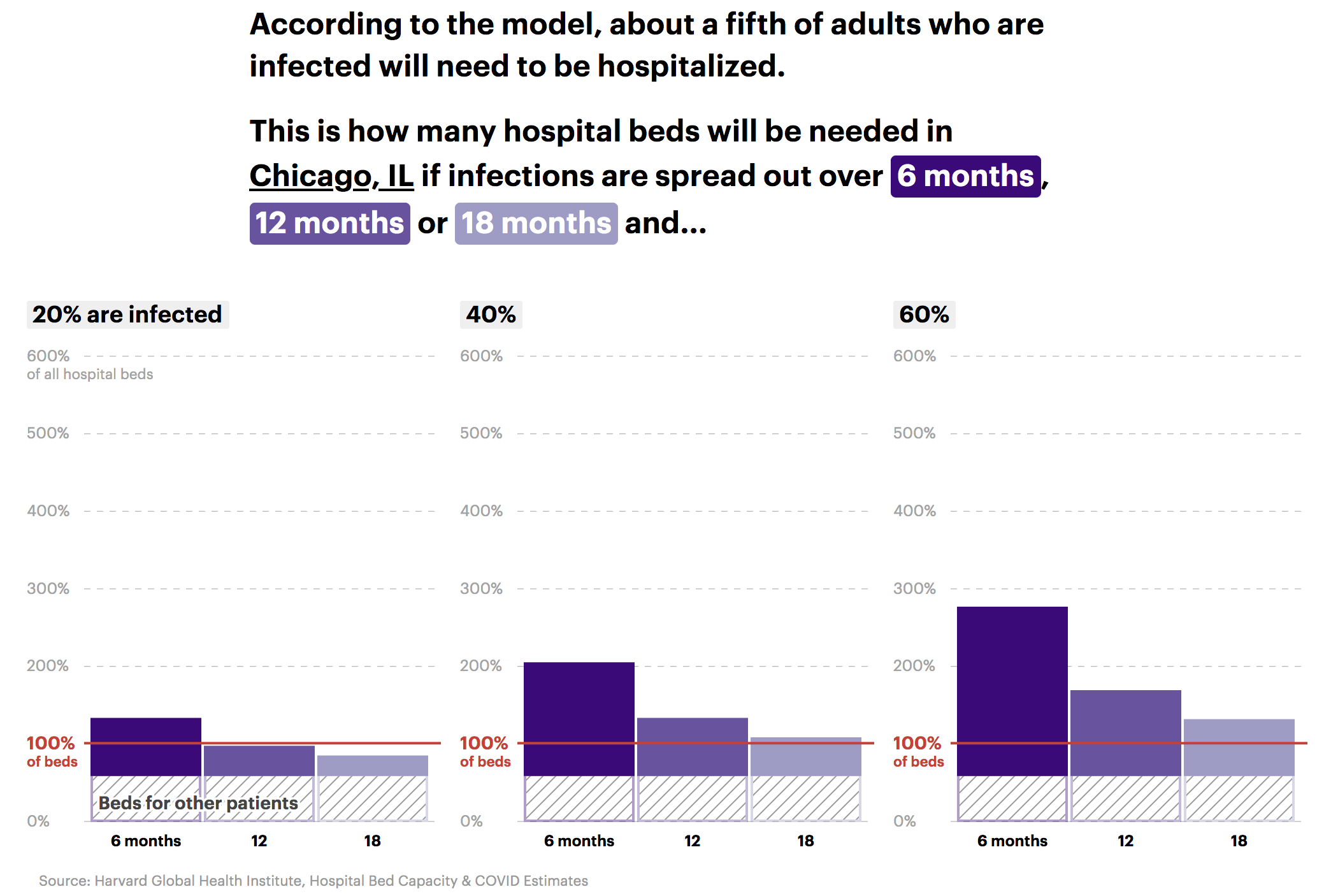