I’m a sucker for good prose, and was thinking about posting some examples of my favorite writing in English, which includes the last page of Joyce’s The Dead, the last paragraphs of The Great Gatsby, and the opening page of The Jewel in the Crown. But rather than look those up, I offer you an hour of great prose read aloud by David Attenborough.

It’s from a book I first wrote about in 2010; I was excited to discover a beautiful classic that hardly anybody knew. And I still consider it the best and most lyrical book about nature ever written. (“Ring of Bright Water” is up there, too.). What I said a decade ago still holds:

The Peregrine, by John A. Baker, may not be the best nature book I’ve ever read, but I can’t think of a better one. And it’s certainly the most beautiful.   The book is not very well known—I came across it in an online review (another is here)—and the author is nearly completely obscure.  We’re not even sure when he died (one report gives 1987), although he was born in 1926.  The book, a short 190 pages, recounts a six-month period, from October to early April, when Baker tramped the fields of Essex near his home, searching for the peregrine falcon (Falco peregrinus).  At the time, the species was severely endangered, for the use of DDT, working its way through the food chain, was damaging the bird’s reproduction.

The book, in its beauty, has the air of an elegy, not just for the falcon, but for humanity in general and perhaps for the author himself:  some say that he went on his falcon quest soon after being diagnosed with a fatal illness.  And the book is hypnotic: day after day Baker goes searching for falcons, usually finding them.  They become sufficiently accustomed to his presence that he can often approach quite closely, and they even follow him on his peregrinations—the bird and the verb have the same Latin root, meaning “to journey”—hoping he’ll flush some prey.

And that’s the plot: man goes out, man watches falcon and other birds, man goes home. You’d think that this narrative, continued over nearly 200 pages, would be boring. It’s not, for it’s sustained by the gorgeous prose and Baker’s unique way of seeing.  If you buy this book, though—and I STRONGLY recommend that you do—don’t read it in one gulp.  That would be like eating five desserts in a row.  I allotted myself twenty pages per night.

Click on the screenshot below to listen to Attenborough. This will be available for 23 more days. 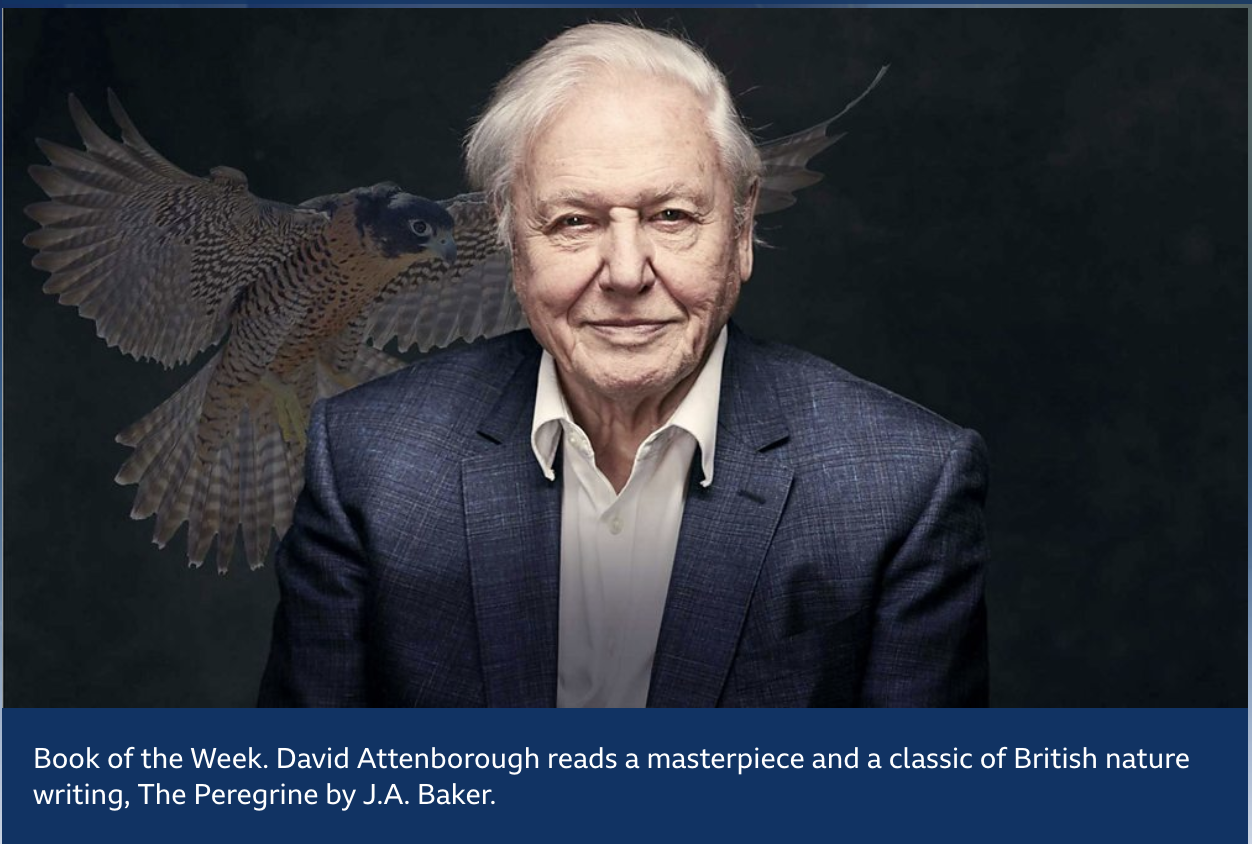 18 thoughts on “Attenborough reads The Peregrine”