In honor of Ceiling Cat’s Day, we have contributions from two readers today. The first is our Official Website Videographer, Tara Tanaka from Florida. (Her Vimeo site is here and her Flickr site is here.) I much regret having my lecture trip to Florida canceled, as I was going to watch birds from her famous blind.

Her notes are indented, and be sure to watch the video on the big screen:

The last two mornings we’ve had large groups of Great Egrets [Aredea alba] that are nesting in our cypress swamp gathering to eat what we think are some kind of large tadpoles, however this morning we had a rare treat – sixteen Glossy Ibis [Plegadis falcinellus] joined them and fed for about 45 minutes before they all disappeared. This was shot from inside the living room, so there is no audio.

And reader Robie sent some photos of a dangerous interspecific interaction near Chicago. Robie’s notes, which include anthropomorphic captions, are indented:

I am a daily reader (but very rare commenter under the name of “Robie”). I have been meaning to send these pictures for a while, because I know you like your squirrel friends (as do I). I took these in November 2013 at the Morton Arboretum. Most of the squirrels I encounter in the woods at the Arboretum are fox squirrels [Sciurus niger] rather than grays.

While walking on a wooded trail I heard a commotion up in a tree, and looked just in time to see a red-tailed hawk [Buteo jamaicensis] land clumsily on a branch. As I admired the hawk, I noticed a fox squirrel right nearby, so I assume the hawk had been attempting to catch the squirrel. The squirrel started boldly pestering the hawk. I watched for almost ten minutes while the squirrel ran all around the hawk, peering at it from every angle, until the hawk left the tree.

“Hey buddy, I’m right behind you.” 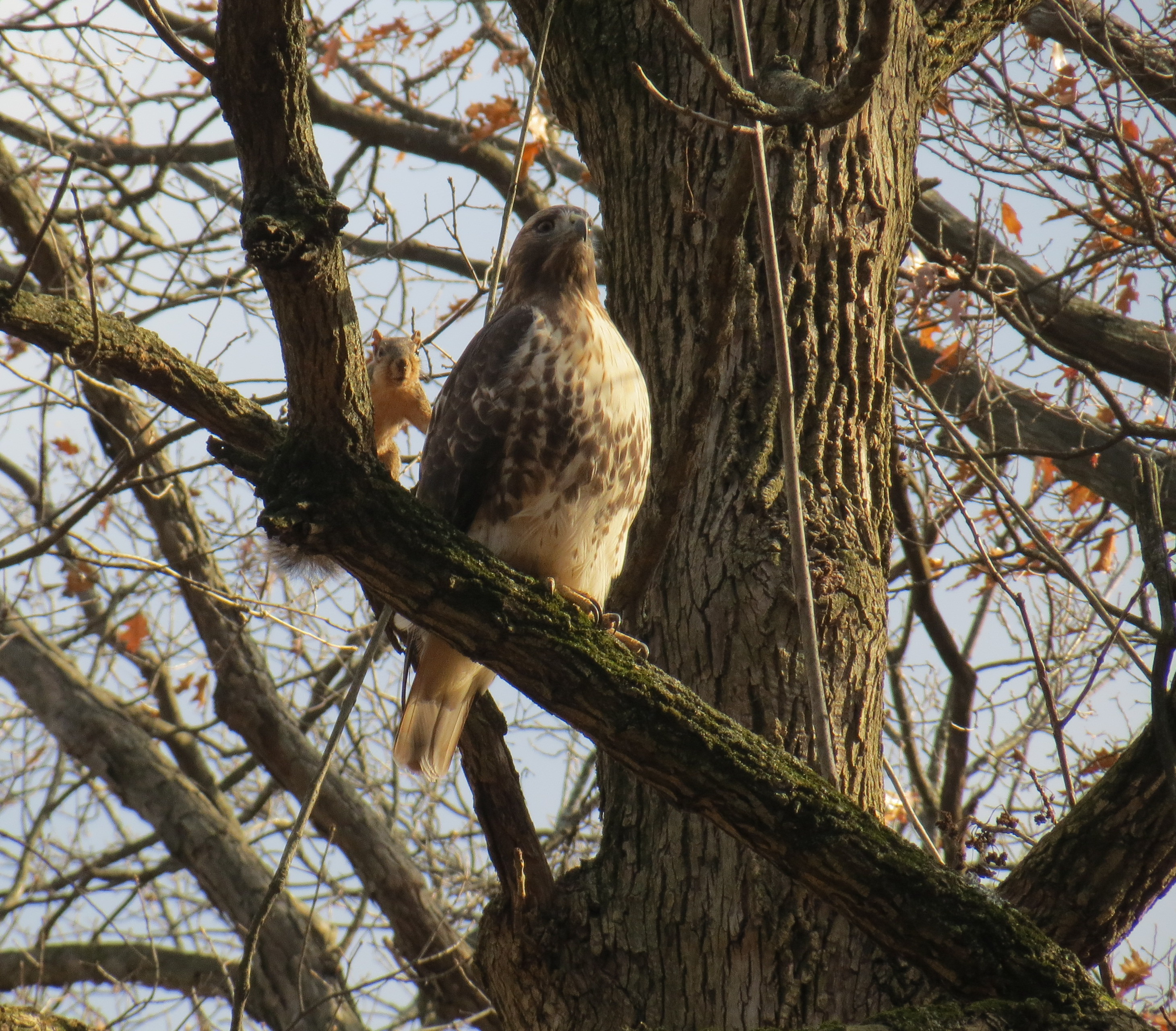 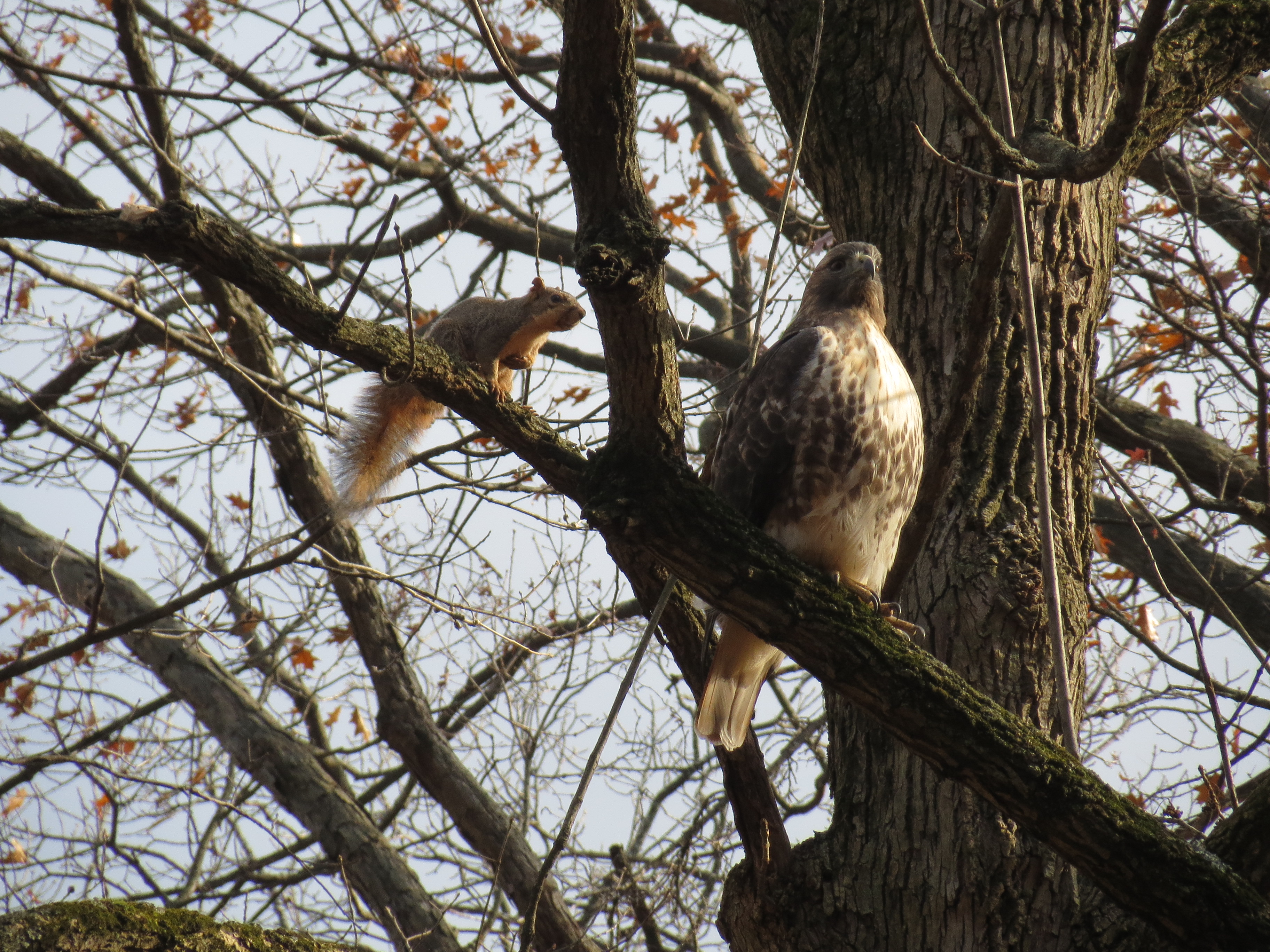 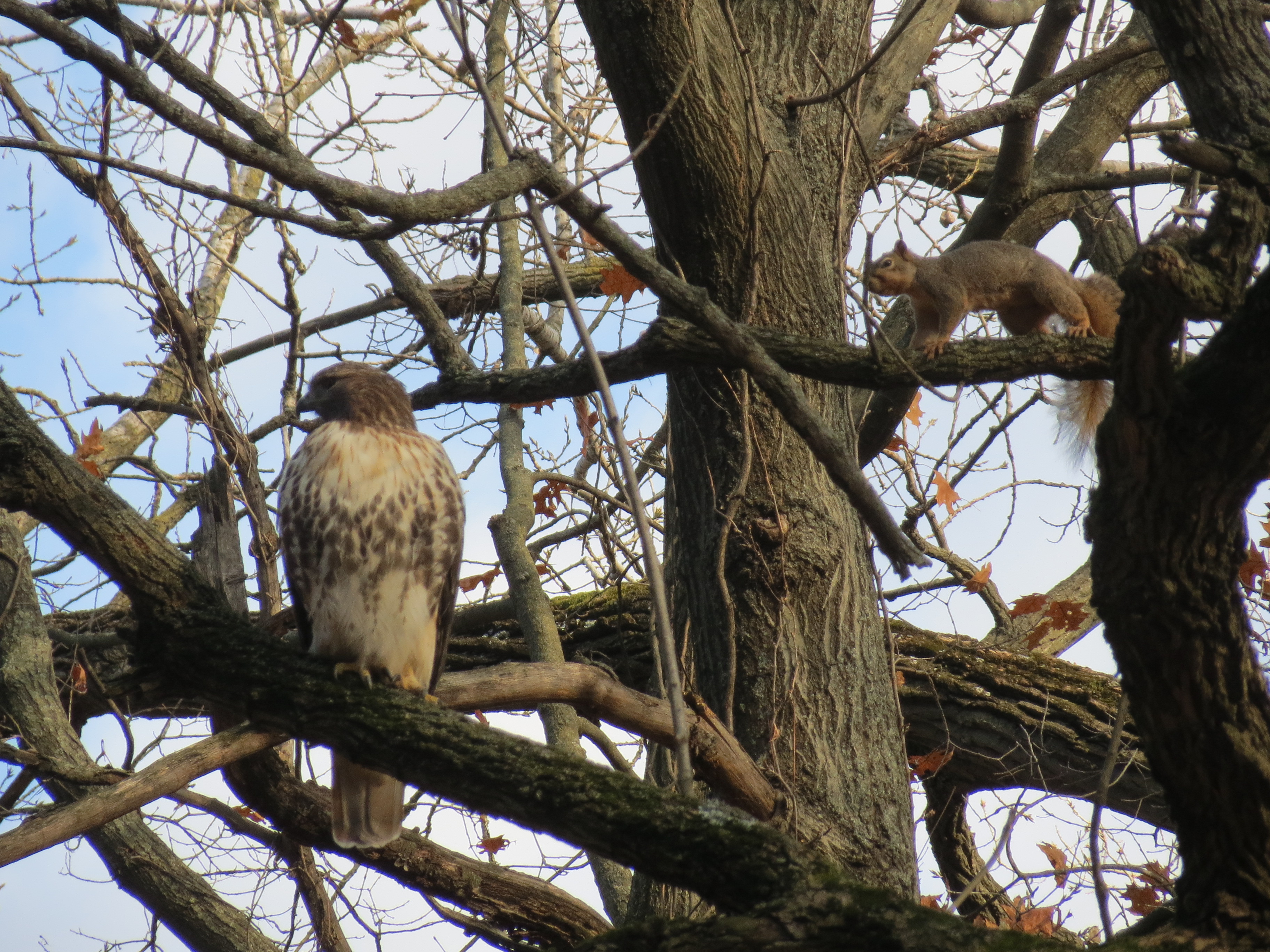 “Oops, I think I’ve been spotted!” 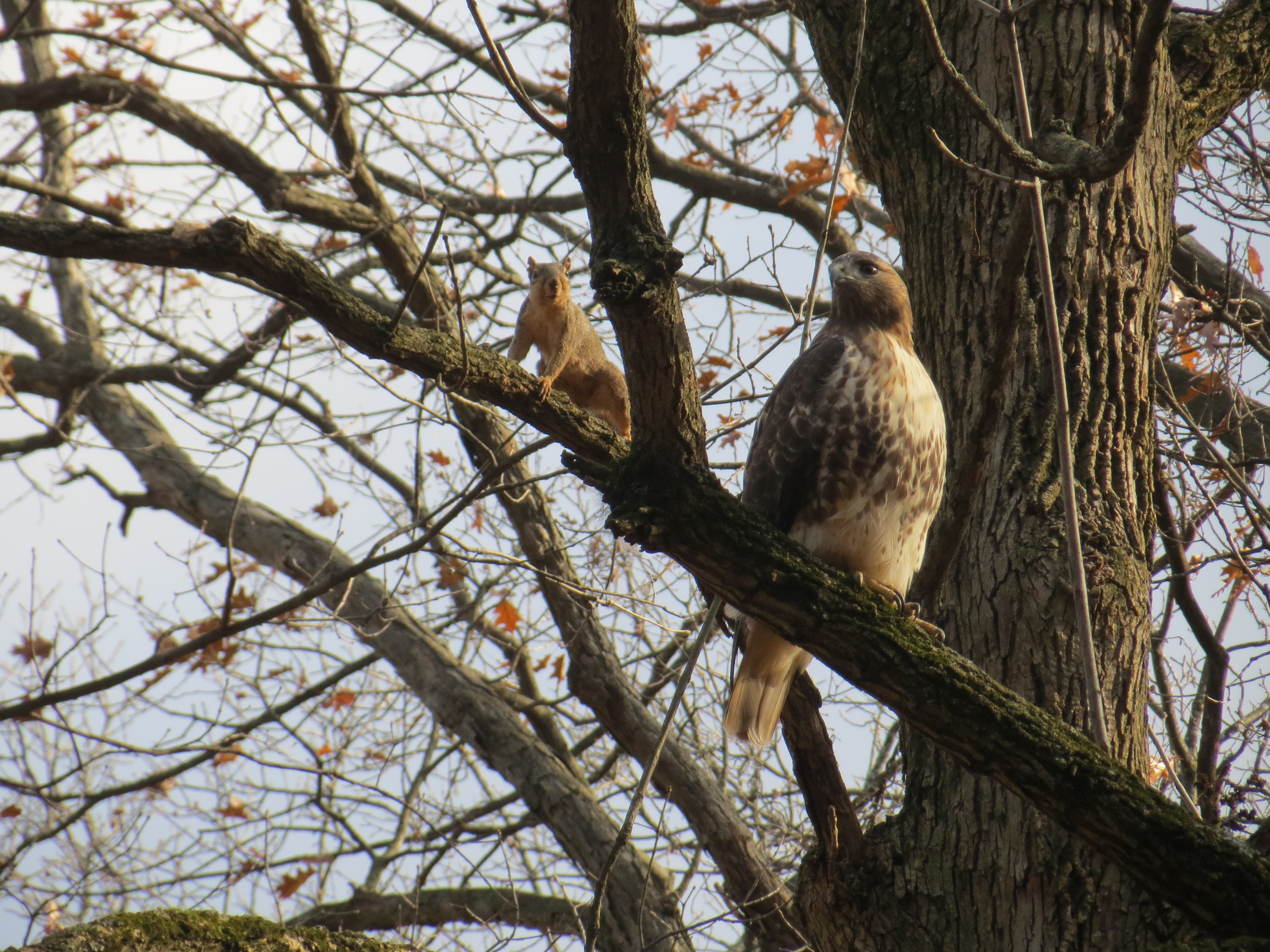 Finally the hawk appeared to tire of this, and it left the branch and flew to the ground. It seemed to have forgotten I was there (or didn’t care), because it landed only about three feet away from me. 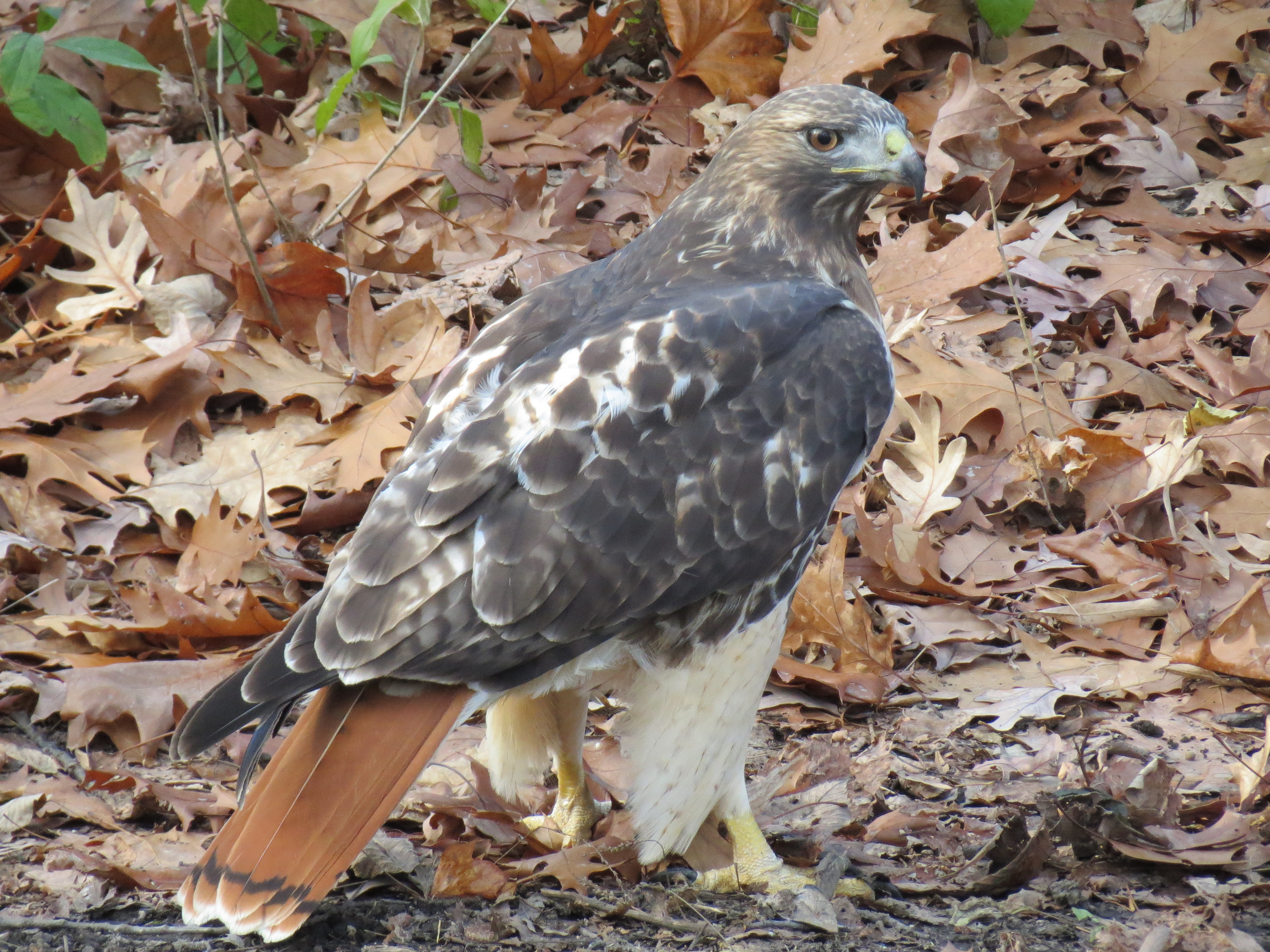 I hope you are weathering the stay-at-home situation without too much boredom. These pictures remind me that outdoor spaces are still open, and (I hope) it won’t be long before we have some fine early-spring weather.