On the NBC News last night, I heard the story of a false racially-motivated bullying report, which reminded me of the Tawana Brawley rape hoax publicized in 1987 by Al Sharpton. I’m not posting this to argue that these kinds of allegations are often false. I don’t think they are, but they do occur and shouldn’t be accepted at face value without verification. Rather, I wanted to briefly note how the New York Times, by changing its headlines after the hoax was revealed, also showed its ideological bias, which, as I’ve argued, is getting not only woker and woker, but woke to the extent that the biases conflate the paper’s journalism with ideology. While the paper retains its liberal slant, I no longer think of it as a source that even tries to strive for objectivity.

Now I must add that the photos below were sent to me by a reader, and I haven’t been able to verify it thoroughly yet, though it appears in an article by conservative Rod Dreher, who includes one tweet. (The second headline is accurate.) For the moment I’ll take it as genuine, and will correct this later if this proves to be “fake news.” (Given the way that the NYT is going, though, I doubt it).

The backstory is that Amari Allen. a 12-year-old girl at a Immanuel Christian School in Springfield, Virginia claimed that three white boys had held her down and cut off her dreadlocks. After police questioning, her story fell apart, the girl admitted she made up the incident (she must have cut off her own dreadlocks), and the school and the girl’s parents apologized. (By the way, Mike Pence’s wife teaches at that school, and it’s also a school that, according to the NYT, “says that it does not accept gay students and that it requires employees to affirm that marriage should be between one man and one woman.”)

Well, those school policies are ridiculous, in line with the poison of conservative Christianity. And I feel sorry for Amari Allen, who must have faked the incident to gain attention. She clearly requires some kind of counseling or help.

But there’s no excuse for what the New York Times did when it found out that the story was a hoax. It apparently changed the headline from the original one that emphasized white-on-black bullying, to a race-neutral one (the new headline is also below): 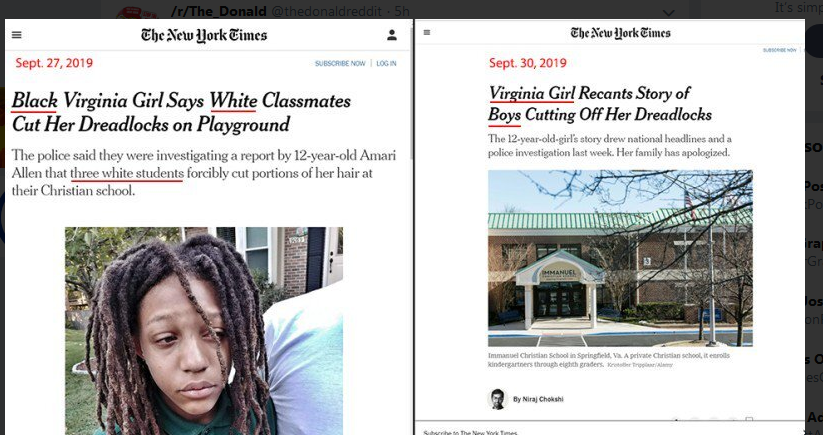 Granted, the revised story, read by clicking on screenshot below, does describe race in its first sentence: “It was a story bound to unleash a storm of news coverage: A black 12-year-old girl reported that three white boys had pinned her down in a school playground and cut off her dreadlocks.”

Yes, and the reason it was bound to unleash a storm of news coverage is because it looked like a hate crime. And the Times, of course, emphasized that in its headline. But if the alteration above is true, then someone at the paper made a conscious decision to de-emphasize race when the black girl’s story was found to be a hoax. “Black” and “white” have been omitted.

The only justification for this I can see is that the paper was trying to stir up outrage by reporting this as a racial hate crime. When the “crime” was found to be bogus, all of a sudden race disappeared. But if race was relevant to the first headline—and you can make the case that it was—it’s also relevant to the retraction, because, as the Times admits, race was the reason that the story got so much play in the first place.

The direction the paper is going in upsets me a great deal. The Times has always been my news source, and, while having a reliably liberal slant in its opinions, kept the news separate from editorializing. That has vanished: now the news, as you can see above, is a vehicle for editorializing. I’m pretty sure this is a conscious decision by its new publisher, A. G. Sulzberger.

The original tweet mentioned in the OP didn’t get what the Times did quite right. There are two stories: the original report, and the recantation. The tweet shows  the headline of the two different stories. This is not a case of a changed headline, but rather that in the second story the headline writer (who is not the reporter–as noted in the OP, race was front and center in the lede of the recantation story) did not use racial terms. Comments on the infection of the Times‘ news operation by its editorial board (i.e. the opinion pages) apply to this choice of wording. (I would also note that the original report article and the recantation article are by different reporters.) 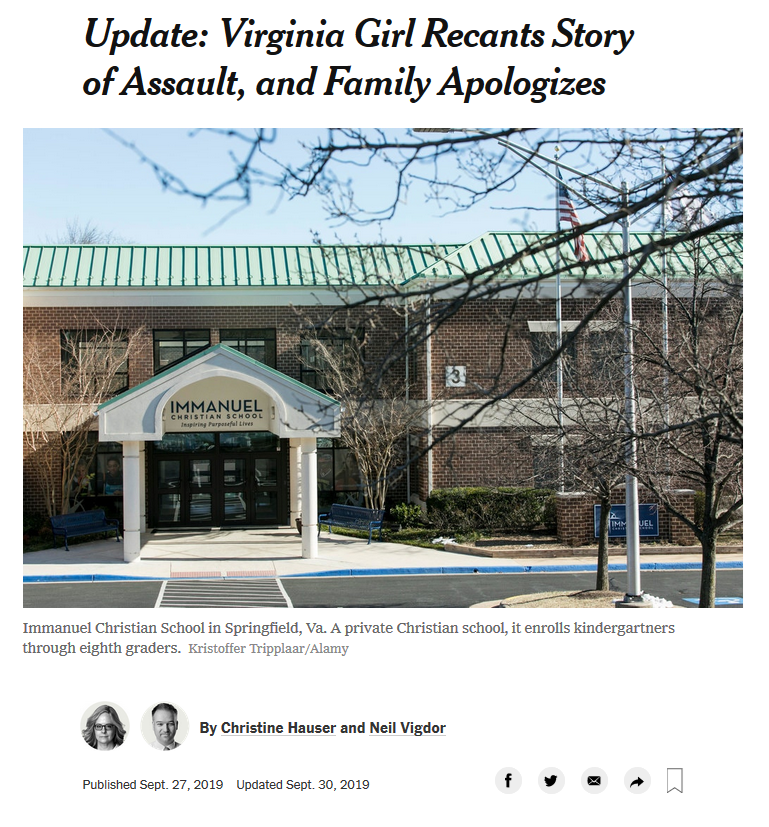 The Times has done two things here. First it changed the headline of an already posted story. This is not that unusual in the age of continual story updates in the digital age. The choice to take race out of it is subject to the critique of the Times Jerry made. What is much more unusual is the second change made– the Times negates the story not just in the headline, but in an update preceding the original article: 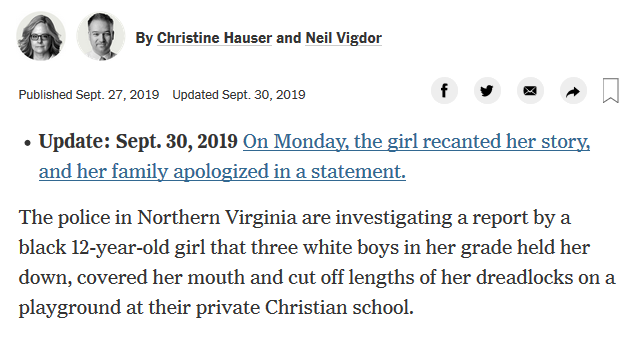 In my experience, the Times hasn’t done this before (or so rarely I’ve never noticed). They do follow up articles, they add corrections at the bottom of the article, but they don’t change already published articles– to do so would be a falsification of history, and correctly, they don’t do such Orwellian re-writing. In this case they have not changed the text of the original article– we can still read the original story as put out by the Times— but they have changed the headline so as to make it clear that the original story is wrong.

So what did the Times do? The headline of the new story, and the altered headline of the original story, do downplay race. But it also in effect “canceled” the original story, something it, at least in general, does not do. It may have done so because it realized how bad it made the Times look, but perhaps also because of how bad it, incorrectly, made the school and its white students look. Sounds like a research project for the Columbia School of Journalism.

I originally thought that the Times “wokeness” was just a series of bad hires for the opinion pages, but such bad hires have gone both ways– who, other than his close friends and family, could care at all what Ross Douthat thinks about anything? Jerry sounded the warning early, and, sadly, it is now clear that he was  right, and that “wokeness” has infected much of the paper’s news coverage.