Today we have the last installment of wonderful photos from Bruce Lyon’s recent trip to Alaska. His photos of sandpiper chicks are about the cutest thing I’ve ever seen.

Here is the last in a series of posts about St Paul Island, one of the Pribilof Islands off Alaska. Four previous posts covered some of the 11 species of seabirds that breed on the island (here, here,  here, and here). Today we meet a shorebird with arguably the world’s cutest babies, a couple of songbirds, and the last two species of seabirds, one of which is famous for its puking self-defense behavior.

Rock Sandpipers (Calidris ptilocnemis) are everywhere on the island, breeding both on the tundra and grassy slopes. This species breeds only on islands in Bering Sea and a narrow strip of coast in Alaska and Russia. The birds on St Paul belong to a distinctive Pribilof Island subspecies with a distinctive plumage.

Sandpipers and (other shorebirds) are interesting because they vary in mating system and parental care patterns (more on that later with some posts about Point Barrow shorebirds). According to literature, at some Rock Sandpiper nests both parents incubate the eggs while at others only the male or female does all of the incubation. Even at the nests where both parents share in incubating the eggs, one parent takes over tending the chicks by themselves about a week after hatching. It is not clear what drives this variation in sex roles.

On a few different days we had lovely encounters with a family of sandpipers who decided that the middle of a dirt road was the best place for hanging out with their chicks. The first time we encountered the family we barely missed squashing the four freshly-hatched chicks that were crouched motionless in a group in the middle of the road, blending in nicely with the gravel on the road. Fortunately, I noticed them just in time and screeched on the brakes. We then had fun watching them at close quarters.

Below: One of the chicks strolls towards me with a parent in tow. The chicks were completely oblivious to us, unusual for shorebirds. Normally parent shorebirds freak out when people are around and they give alarm calls that tell their chicks to crouch and freeze but these parents did not do this so the chicks just wandered about doing their thing while ignoring us. We watched the little guys running around the road, exploring and pecking for food and then, when they got chilled, returning to a parent to be brooded (warmed) under the parent’s body. 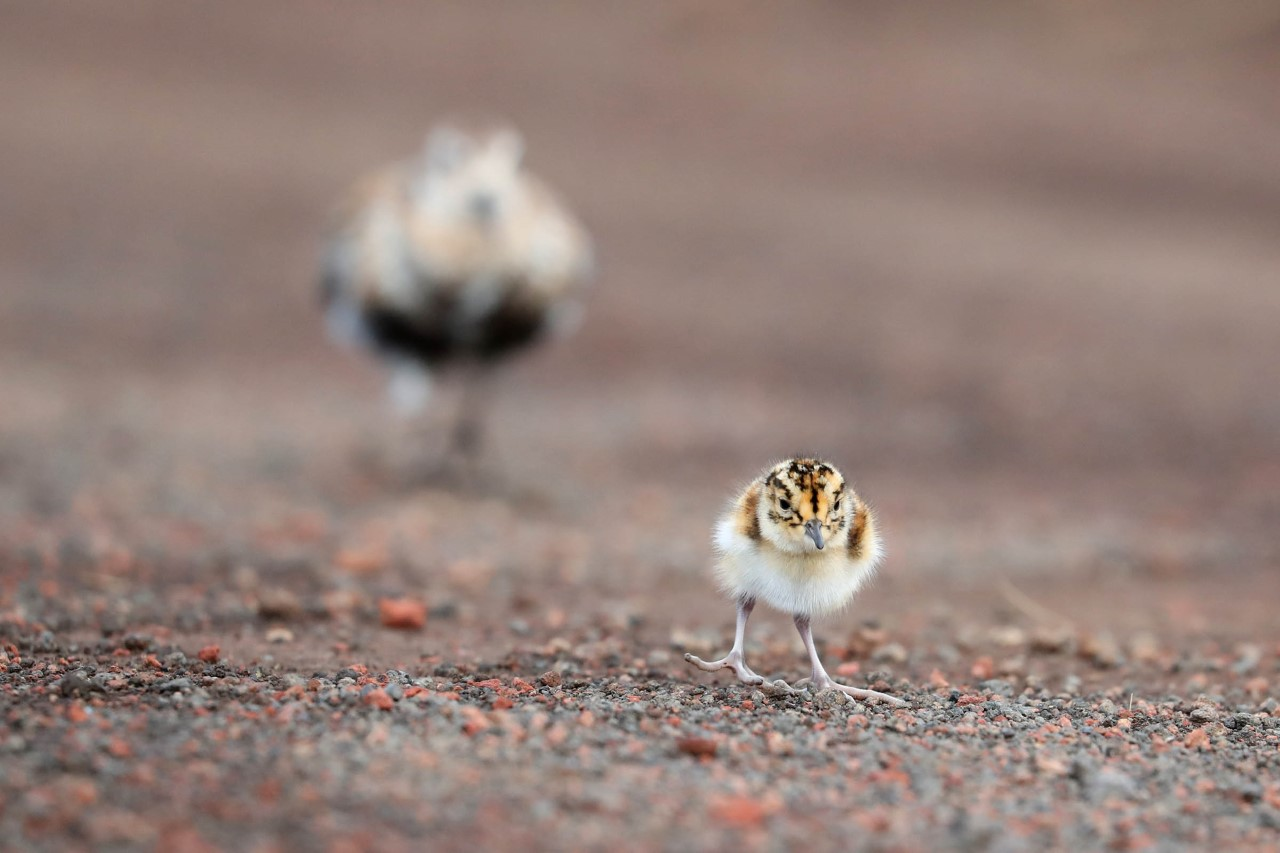 Below: Another photo of a fluffball with a parent standing guard in behind. 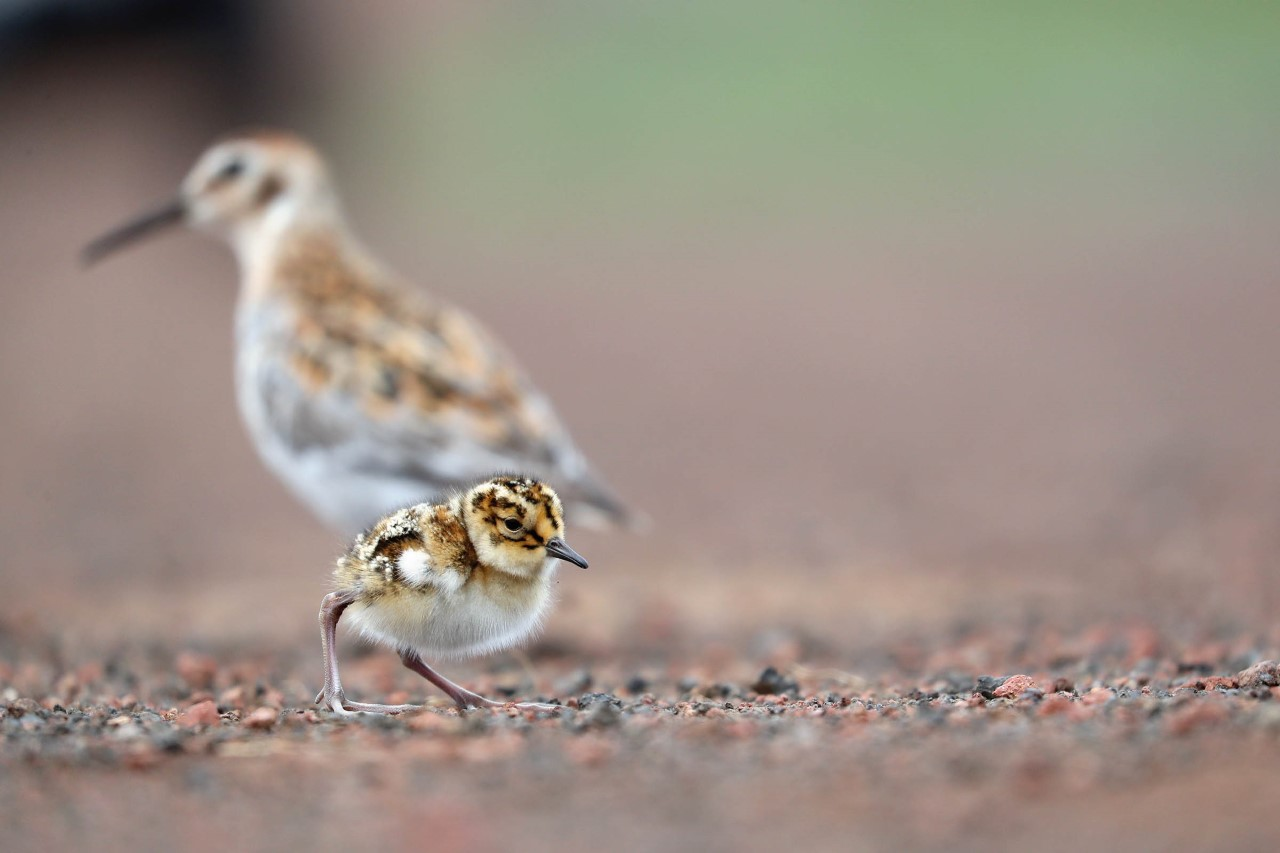 Below: Check out those feet! Baby sandpipers are like little puffs of down stuck on legs. And that gorgeous plumage! Against the tundra this plumage pattern can be almost invisible. Many baby sandpipers look this. [JAC: This has got to be one of our Pictures of the Year!] 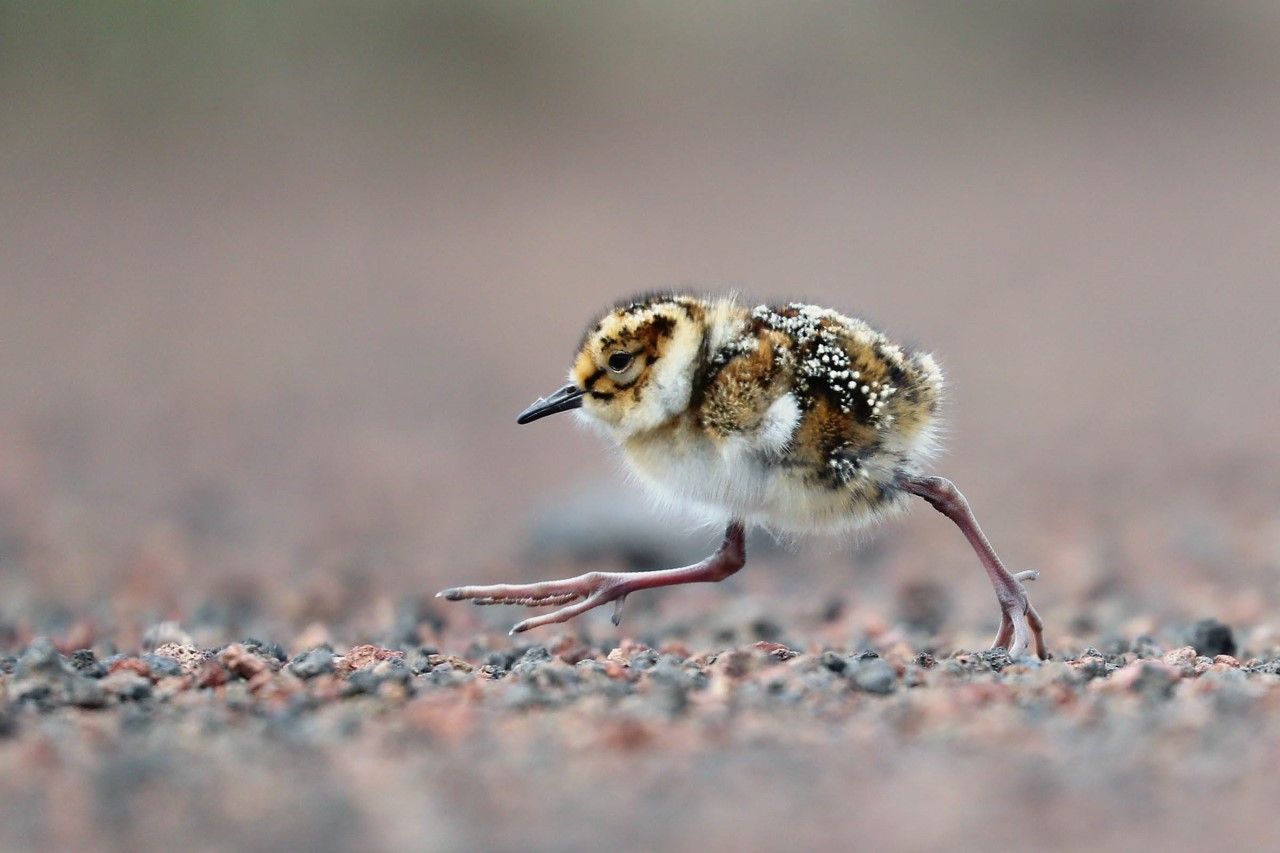 Below: A side by side comparison of the feet of a parent and kid— the chick’s toes are as long as the parent’s, just a little thinner. 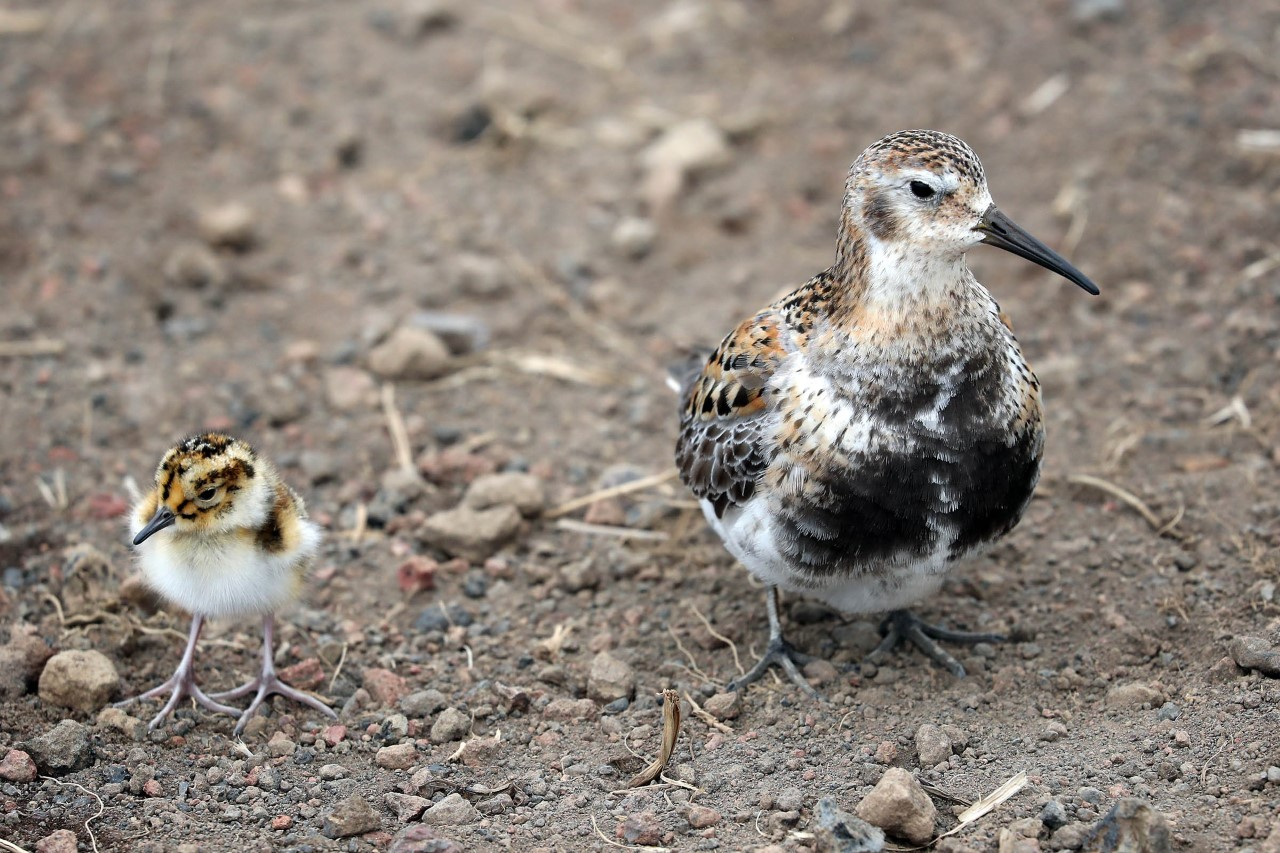 Below: A parent broods two chicks to warm them up. 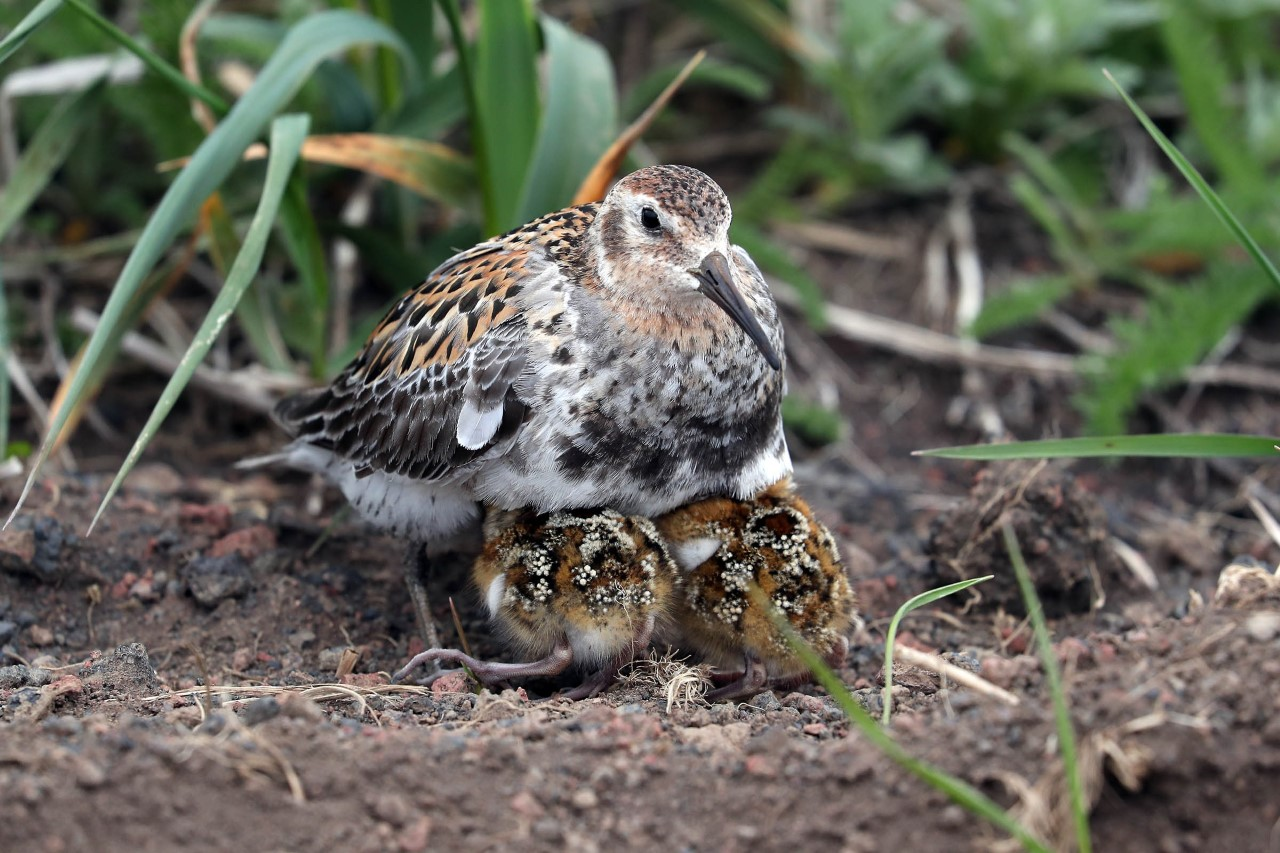 Below. Although the parents never gave alarm calls to make the chicks hide, they did engage in another classic form of ‘nest defense’ behavior that many birds use to lure predators away from their nest or chicks. Many people are familiar with the fake broken-wing display that many shorebirds and other ground-nesting species use to lure predators away from eggs or chicks. Another display also used to fool predators is the ‘rodent run’, shown by the parent below. In a rodent run the parent runs in low crouch, vibrating and flapping its wings and squeaking like a rodent. Rodent runs might work on foxes but they just made us chuckle—after a few minutes of trying to entice us away from the chicks with rodent runs, this bird approached us, climbed up on the edge of the road and promptly took a nap, with its head tucked under its wing. It did not seem too stressed out. What a fun family. 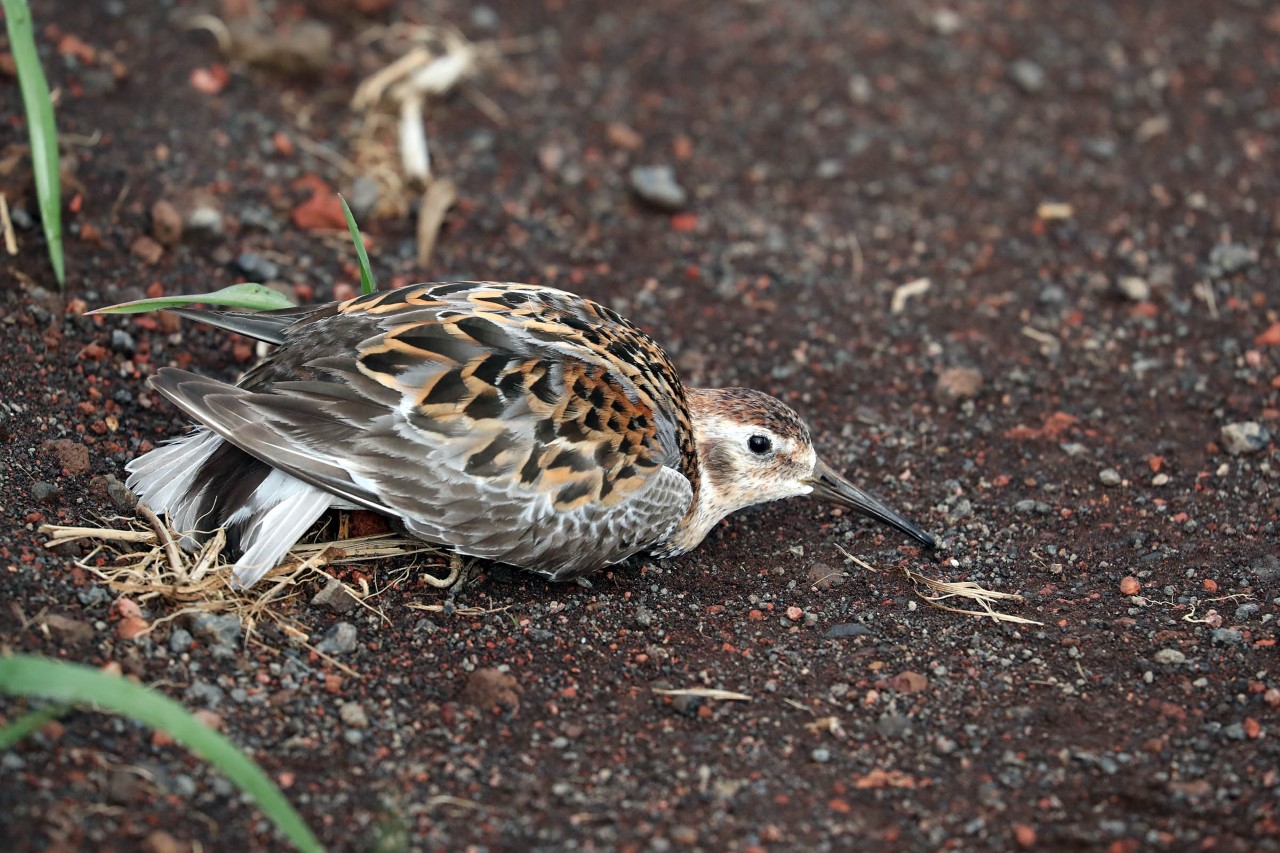 Another lovely bird common on St Paul is the Gray-crowned Rosy-finch (Leucosticte tephrocotis), a songbird with quite striking coloration. There are three species of rosy-finches and they mostly live in the mountains and alpine areas of Western North America. Their breeding behavior can be tough to study because they nest high up on inaccessible cliffs. Gray-crowned Rosy-finches nest on cliffs on St Paul Island as well, but they also nest around people on the island, tucking their nests in crevices in buildings, pipes and even in crevices in an abandoned vehicle. This habit of nesting around people makes them pretty easy to study on St Paul, and my traveling companion Bob Montgomerie and I plan to return to St Paul to study their mating system and parental care patterns. We are hoping that we can bribe them to nest in nest boxes.

Below: We found a couple of female rosy-finches building nests on the seabird cliffs. These females were not only being accompanied by their social mates, but also by other males who seemed to show a keen interest, presumably seeking what are called ‘extra-pair’ copulations with the female. Sex ratios in rosy finches are often extremely biased in favor of males (sometimes five males for every female, reasons unclear) so these extra males have been males that were unable to get a mate of their own. The male in the photo below was the social mate of a female we watched building a nest and he often perched on the cliff near the nest cavity keeping a watch over things. 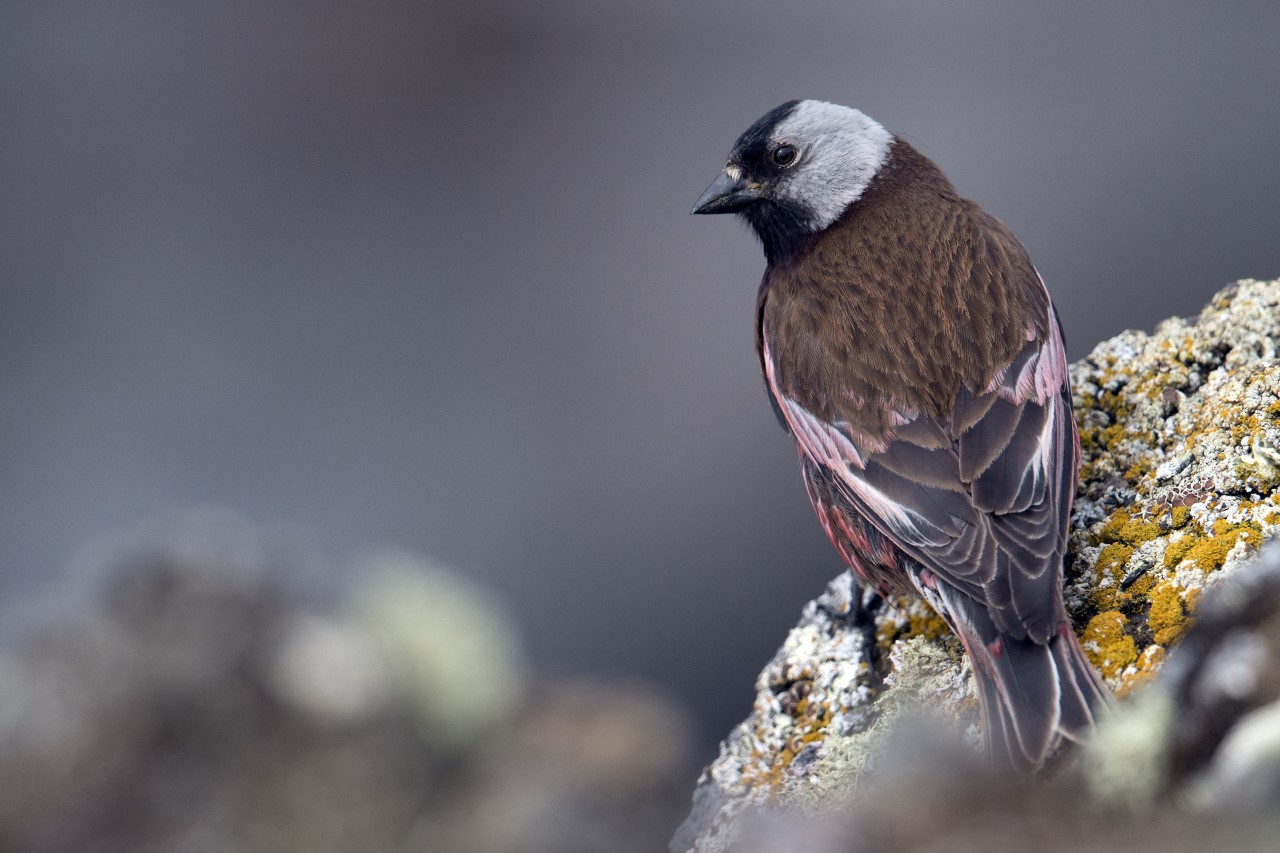 Below: A female rosy-finch taking nesting material into a crevice in the cliff. 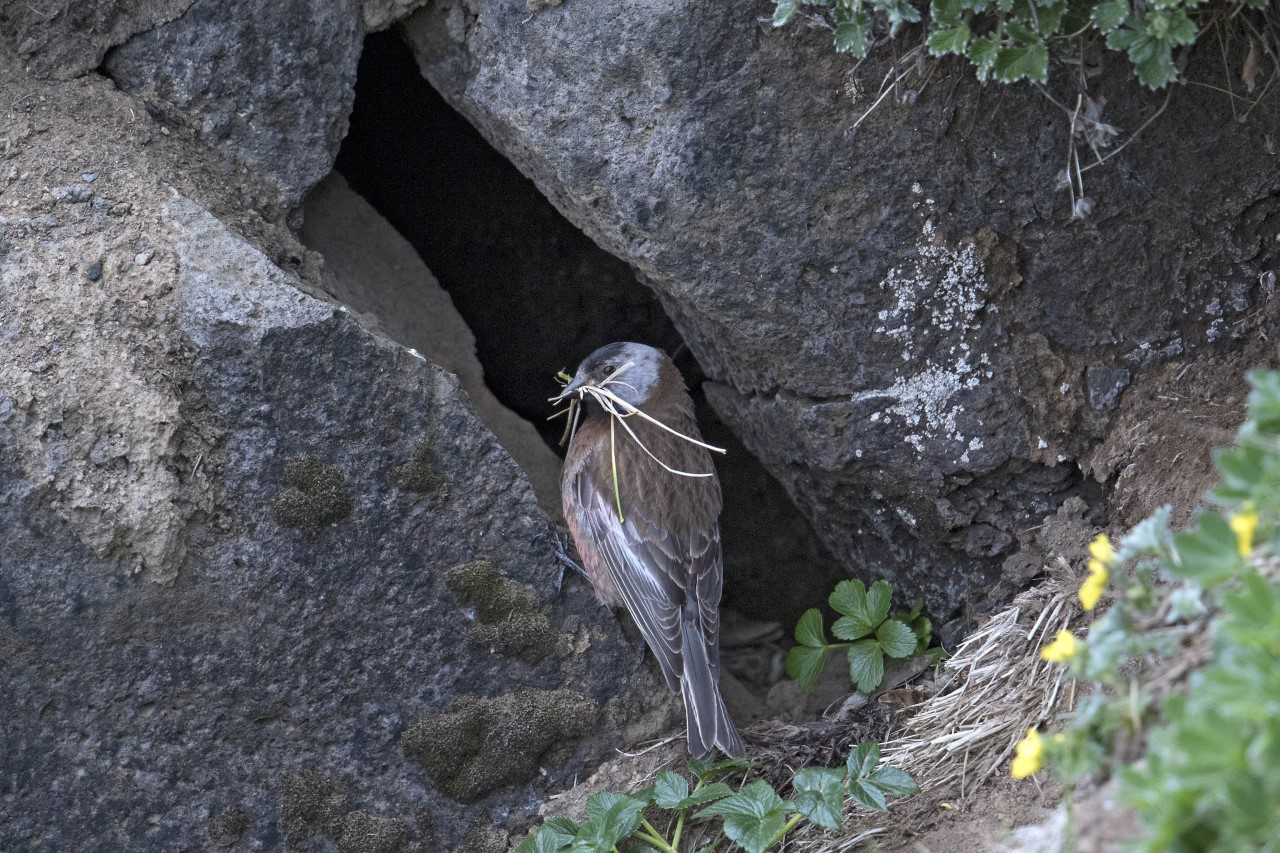 Below: A male rosy-finch displays with nest material in his beak. The funny thing is that males do not actually help build the nest but just pick up material and display with it. We saw two different males do this, very close to the nest site. Why is he displaying? Since the male and female are already paired, it seems that the display is not about attracting a mate. Perhaps the male is weighing in on where he thinks the nest should be built. Or, with all of those other males around looking for extra-pair copulations with the male’s mate, perhaps he is trying to impress his mate with how sexy he is and that she should ignore the other wannabes. I love the colors on these guys and the pink on the wing and rump is very nice. 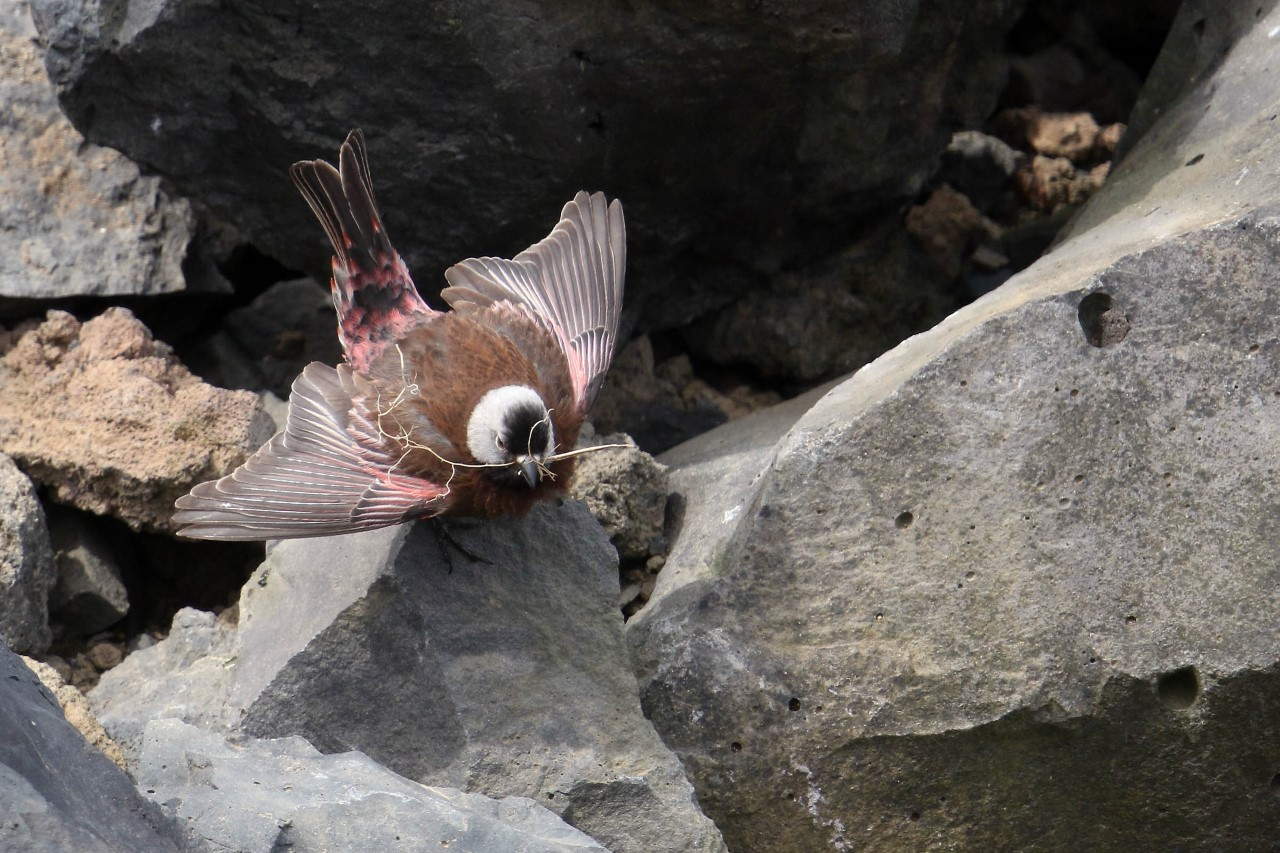 Below: Another songbird that lives on the cliffs with the seabirds is the Pacific Wren (Troglodytes pacificus). Pacific Wrens used to be lumped in with the Winter Wren but got split into a species in the last couple of decades. The bird below is a recent fledgling. The bright yellow line along the base of the beak (gape) is typical for many fledgling songbirds, likely a signal that encourages their parents to feed them more. 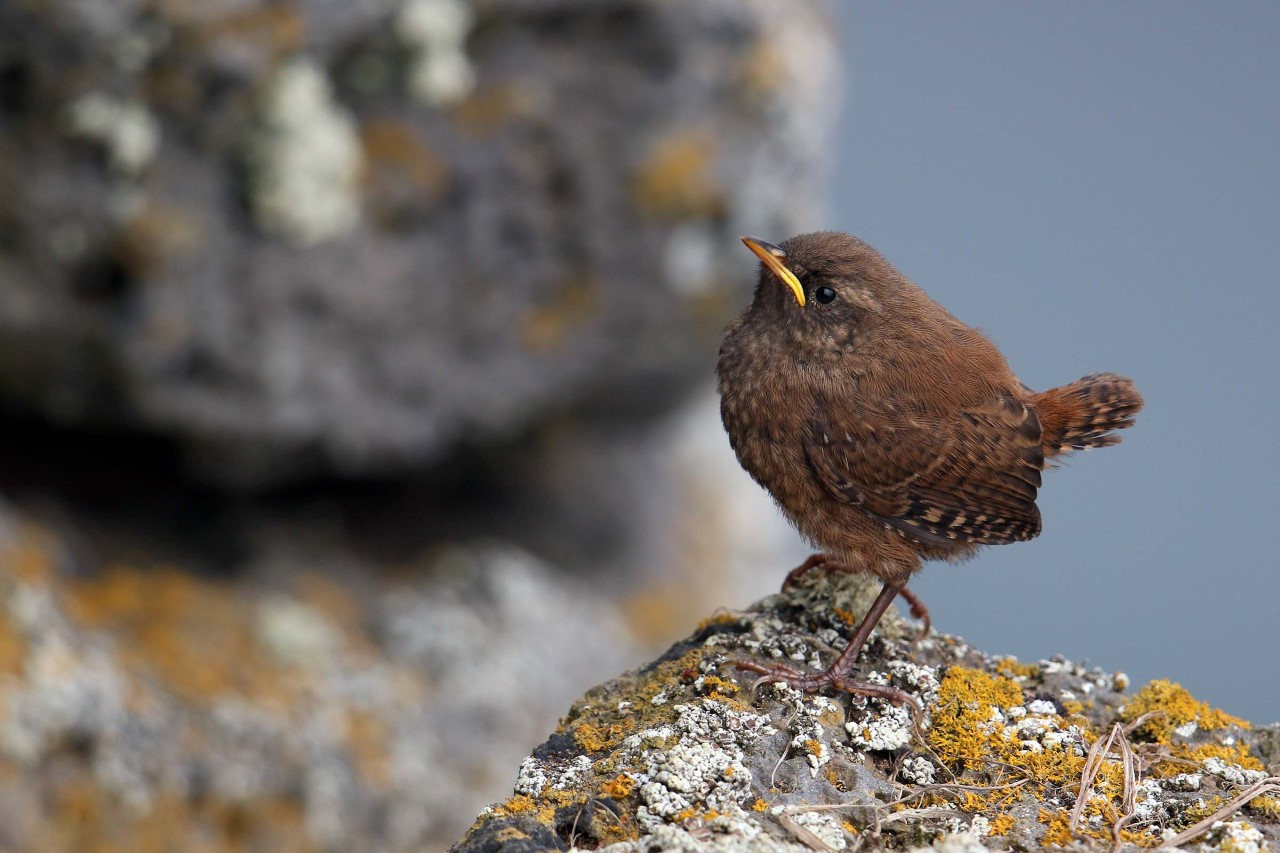 Below: Here is an adult wren singing (presumably a male); note that his gape is orange and not yellow and not as conspicuous as the fledgling. 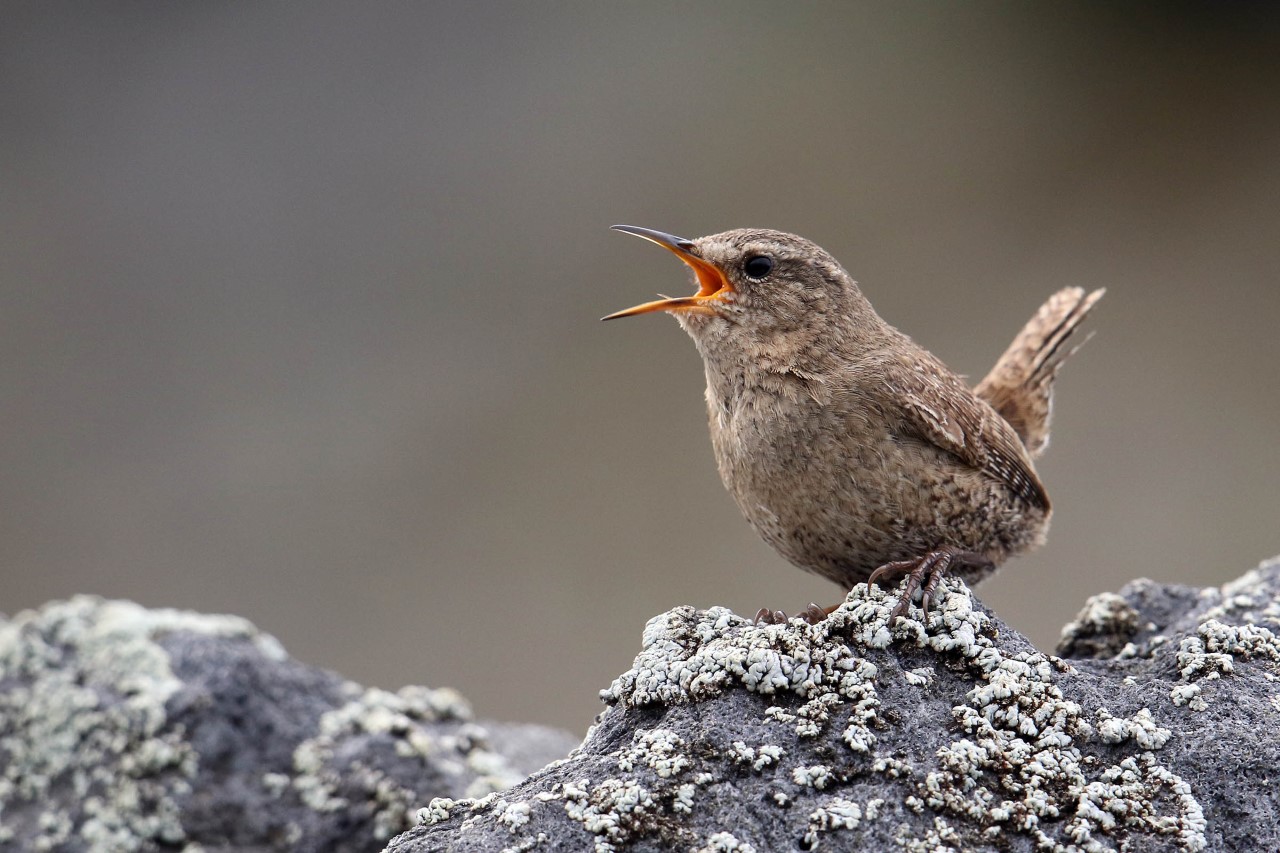 Below: Two final seabirds. This is a Red-faced Cormorant (Phalacrocorax urile), another species restricted to the Bering Sea. It is quite an attractive bird with its bright red face and blue patch at the base of the beak. 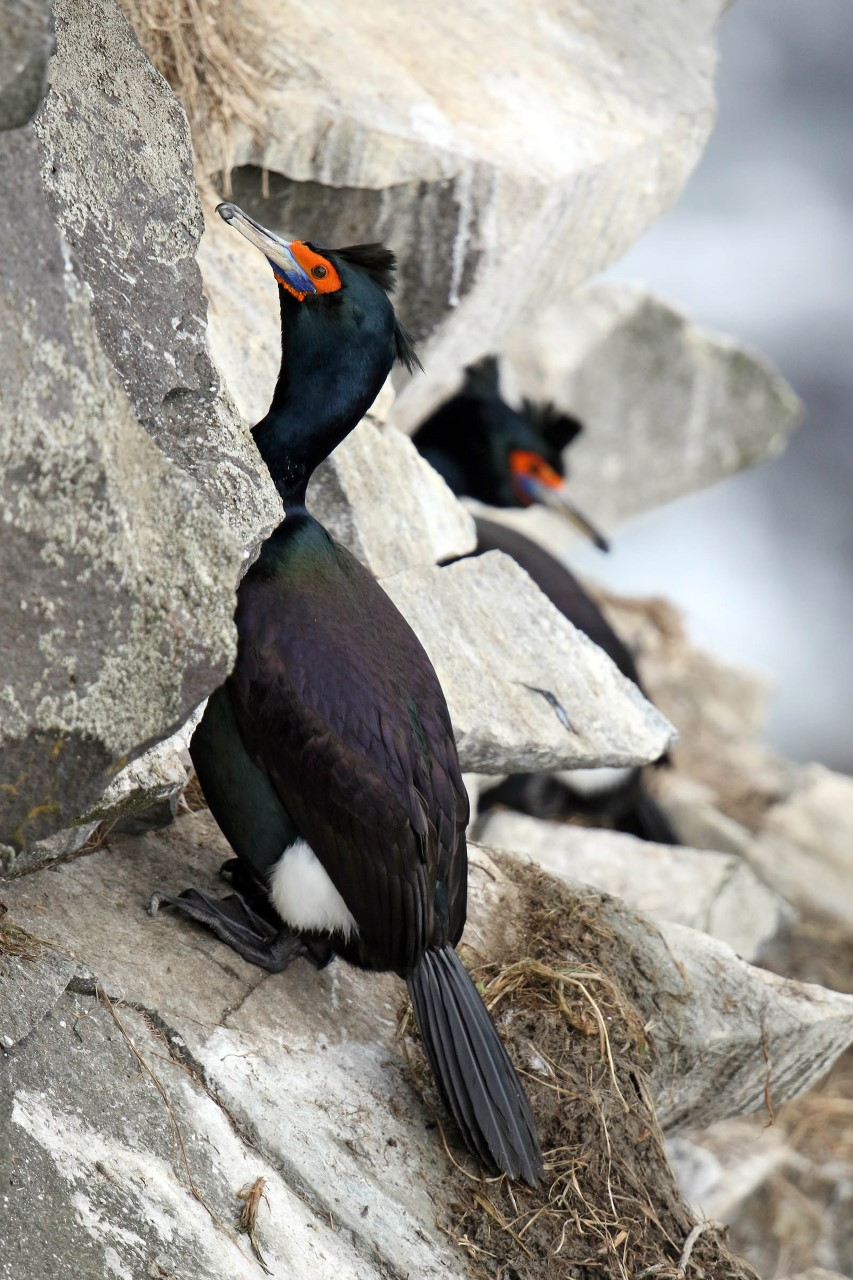 Below. Many of the cormorants were already incubating eggs or has chicks, but this bird was strutting its stuff, presumably to attract a mate. Interesting wing posture and nice display of the fluffy white pantaloons. 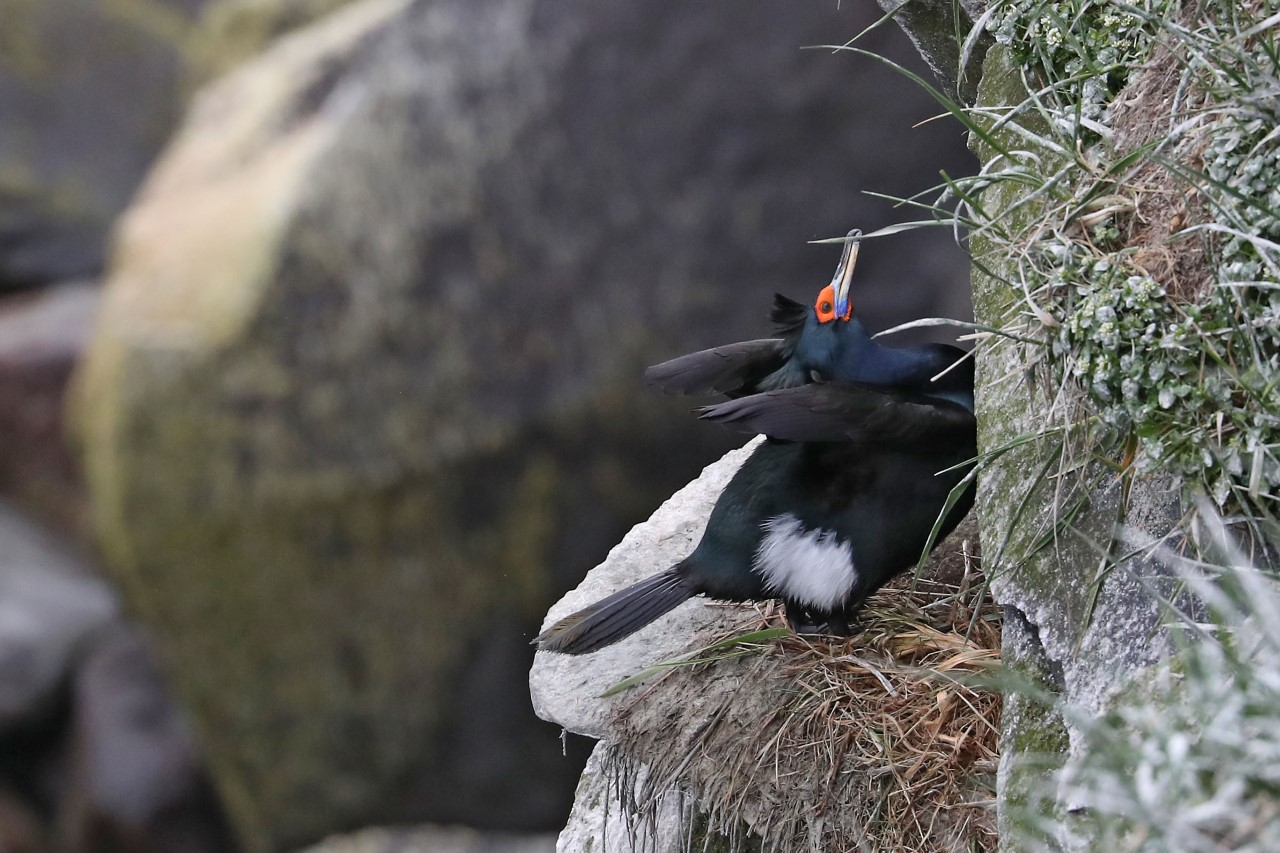 Below: Finally, the last breeding species of seabird on St Paul that I have not yet covered, the Northern Fulmar (Fulmarus glacialis). This is a petrel, a relative of albatross and shearwaters; all of these seabirds (Order Procellariiformes) are called ‘tubenoses’ because of the funky ‘tubenose’ chamber at the top of the beak. The tubenose is easy to see on the top of the beak of this fulmar. All of these seabirds have superb senses of smell which they use to find rich patches of food that are thinly spread over the ocean. Seabird-watching cruises use this behavior to their advantage and can attract lots of tubenoses to the boats by chumming the sea with stinky oils that attract that the birds come in to check.

Fulmars come in different genetically-based color morphs. The bird below is a pale morph individual. The ratios of morphs vary geographically, can have reproductive consequences and appear to be under natural selection. In the Pacific Ocean, pale form birds occur further north than dark morph birds, and the pattern in reversed in the Atlantic Ocean. The bird in the photo seemed to be displaying—it was waving its head back and forth and while calling. 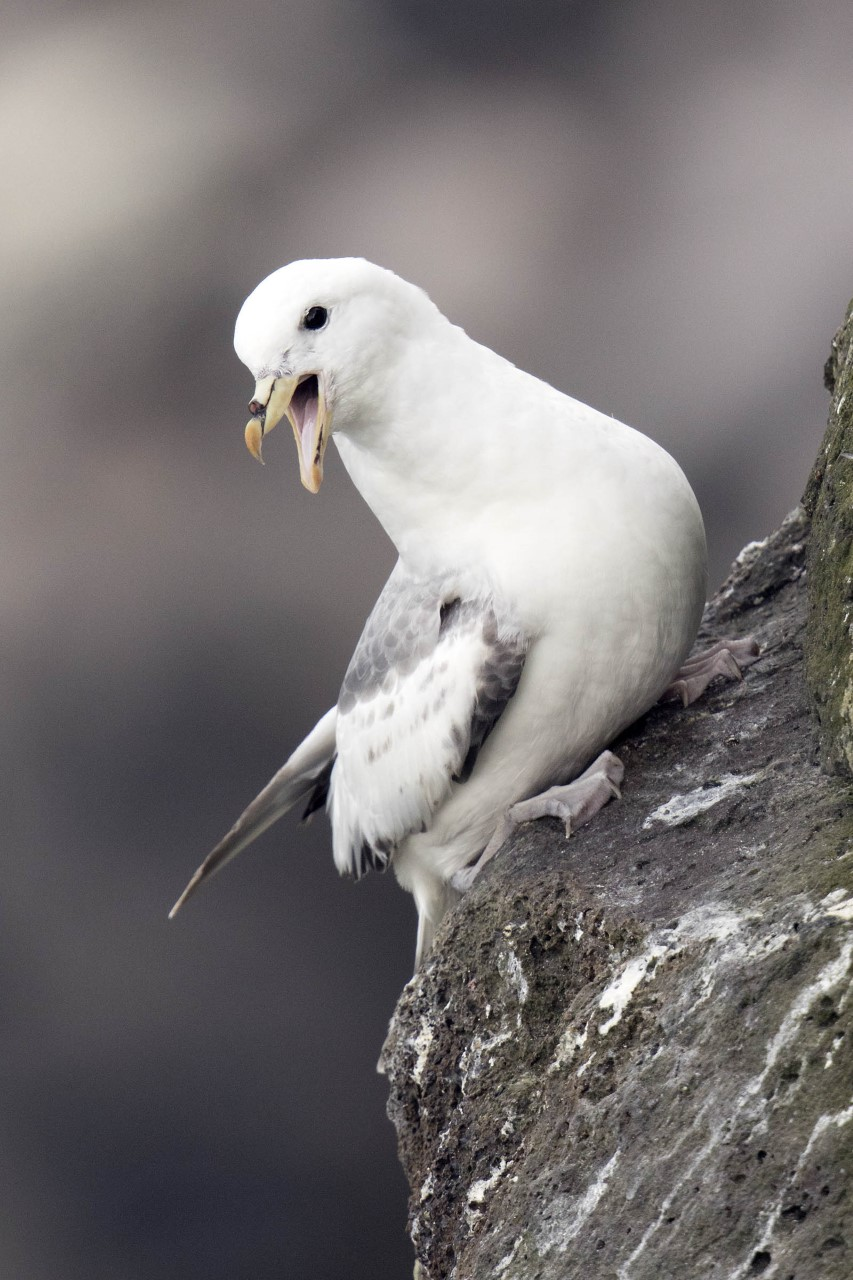 Below: A dark morph individual flies by the cliffs. 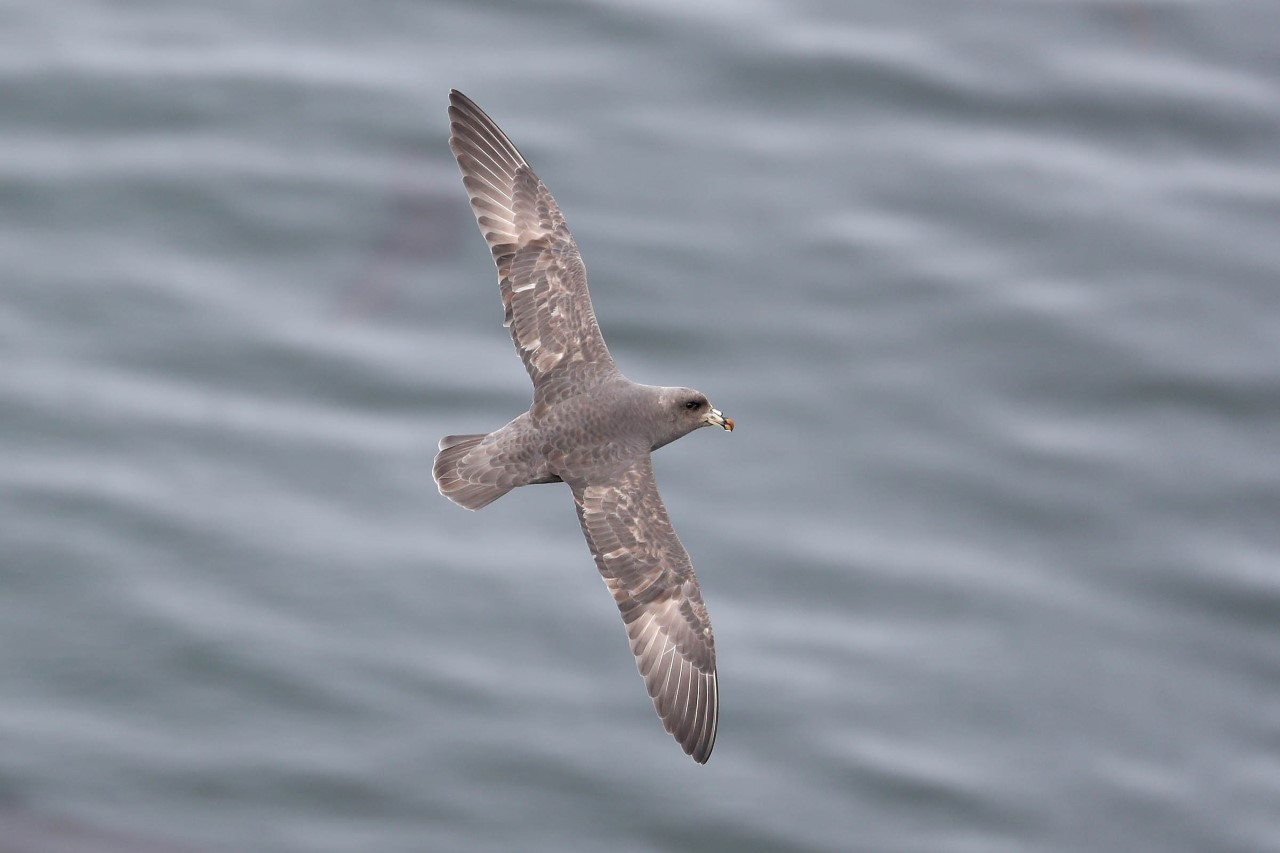 Below: I would be remiss if I did not mention the fabulous puking defense of fulmars. Fulmar chicks defend themselves by squirting a foul-smelling orange oily liquid from their stomach when they feel threatened, threats that can include predators, innocent bystander birds and biologists trying to weigh the chick. A friend of mine worked on fulmars and he had a special fulmar puke coat that he wore when working with the birds, and it apparently smelled awful. This fulmar puke doesn’t just stink—it is nasty stuff that kills birds. I found a couple of papers that listed 20 species of birds, including a lot of raptors, that died from being squirted. The oil is both very sticky, which mats all of the feathers together so that the victim can no longer fly, and it also strips feathers of their waterproofing so that waterbirds become waterlogged and drown.

Here’s a video of a fulmar chick defending itself [JAC: this and the one below are not Bruce’s; he took them from the Web]:

If you liked that, Bruce sent another one.