Today Bruce Lyon continues his odyssey through Alaska with more wonderful bird pictures (and a bonus mammal!). His captions are indented.

Here is another in a series of posts about St Paul Island, one of the Pribilof Islands off Alaska. Three previous posts covered some of the 11 species of seabirds that breed on the island. Today’s post follows on three previous posts (here, here, here) and covers a few more of the seabird species.

Below. A picturesque section of cliff festooned with several breeding seabirds, mostly murres and kittiwakes, the focus of today’s post. 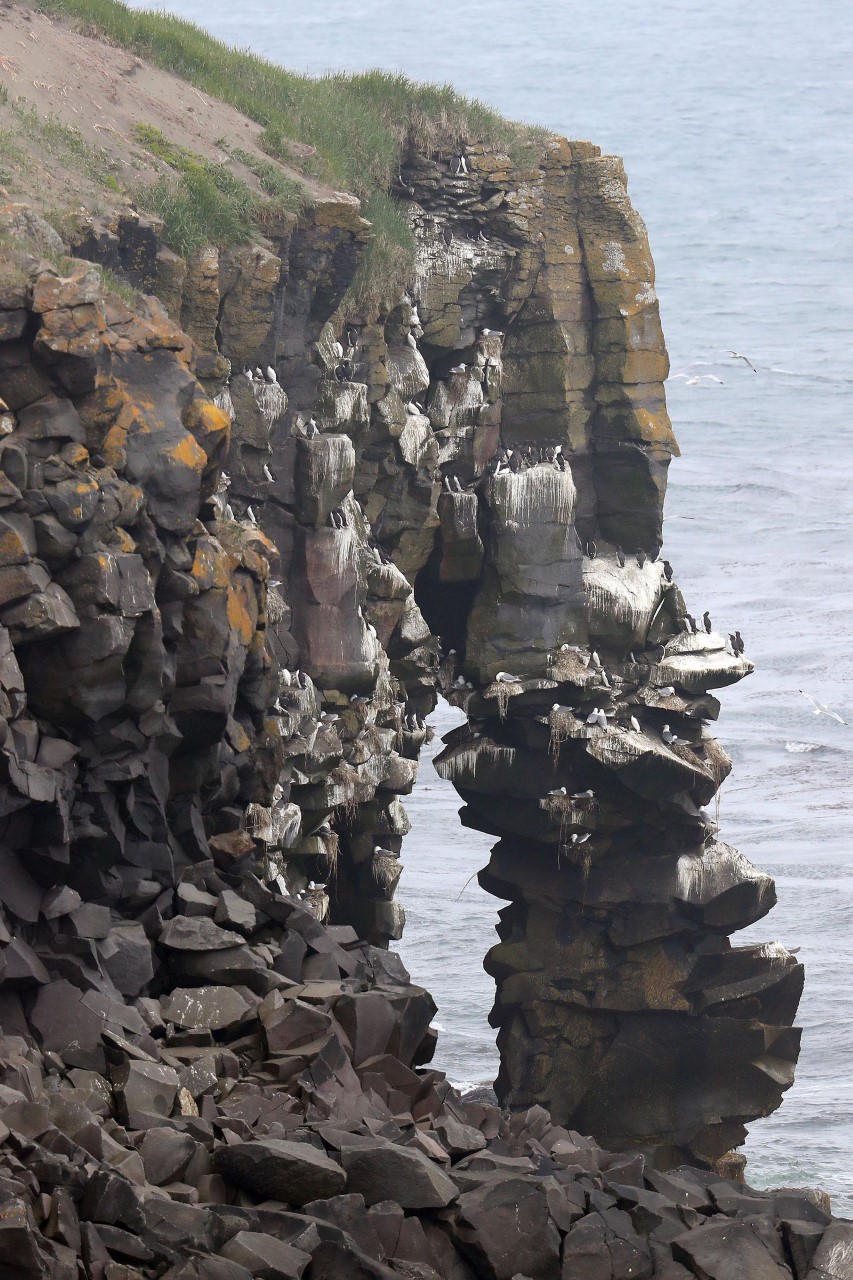 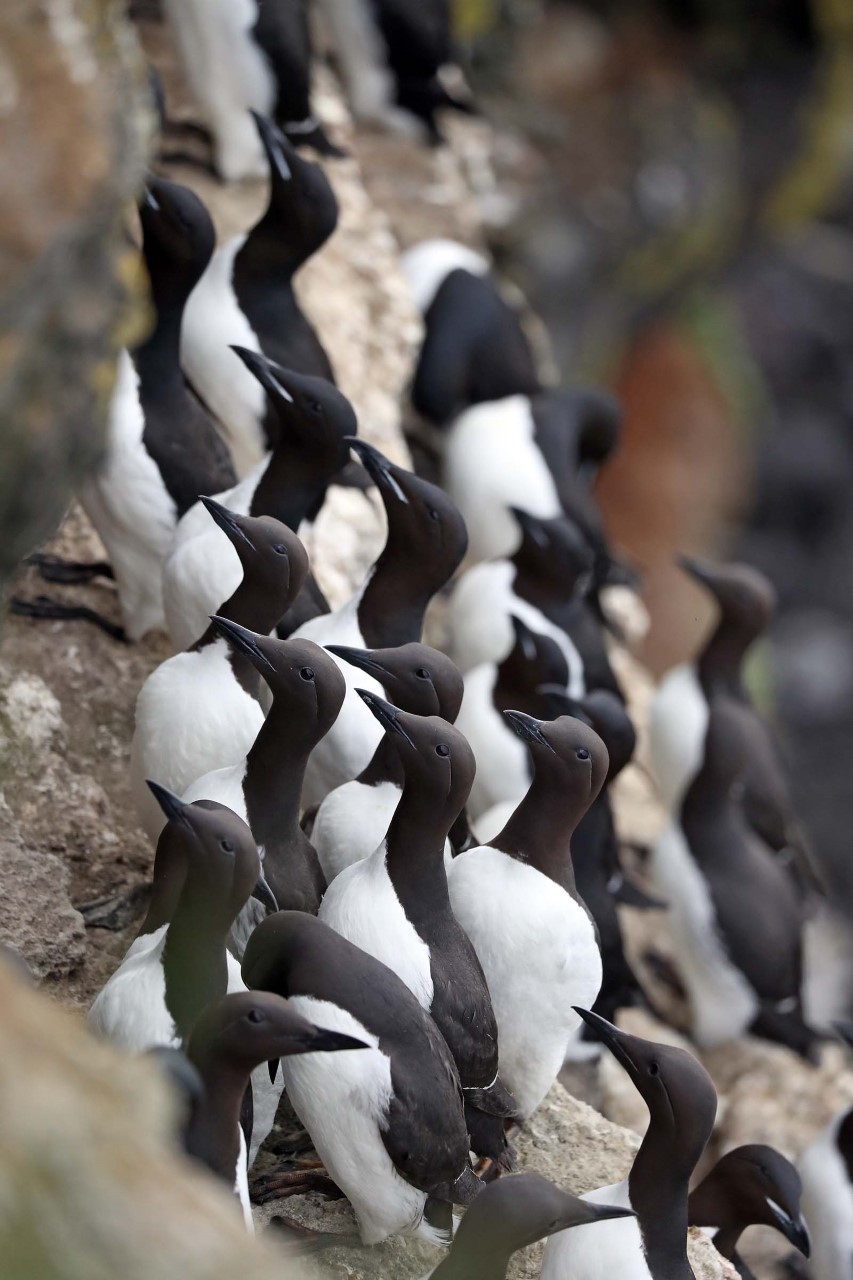 Below: A little collection of Thick-billed Murres. The murres were not nesting yet, but when they nest they lay their single eggs on small ledges like this. Common murres prefer broader ledges. 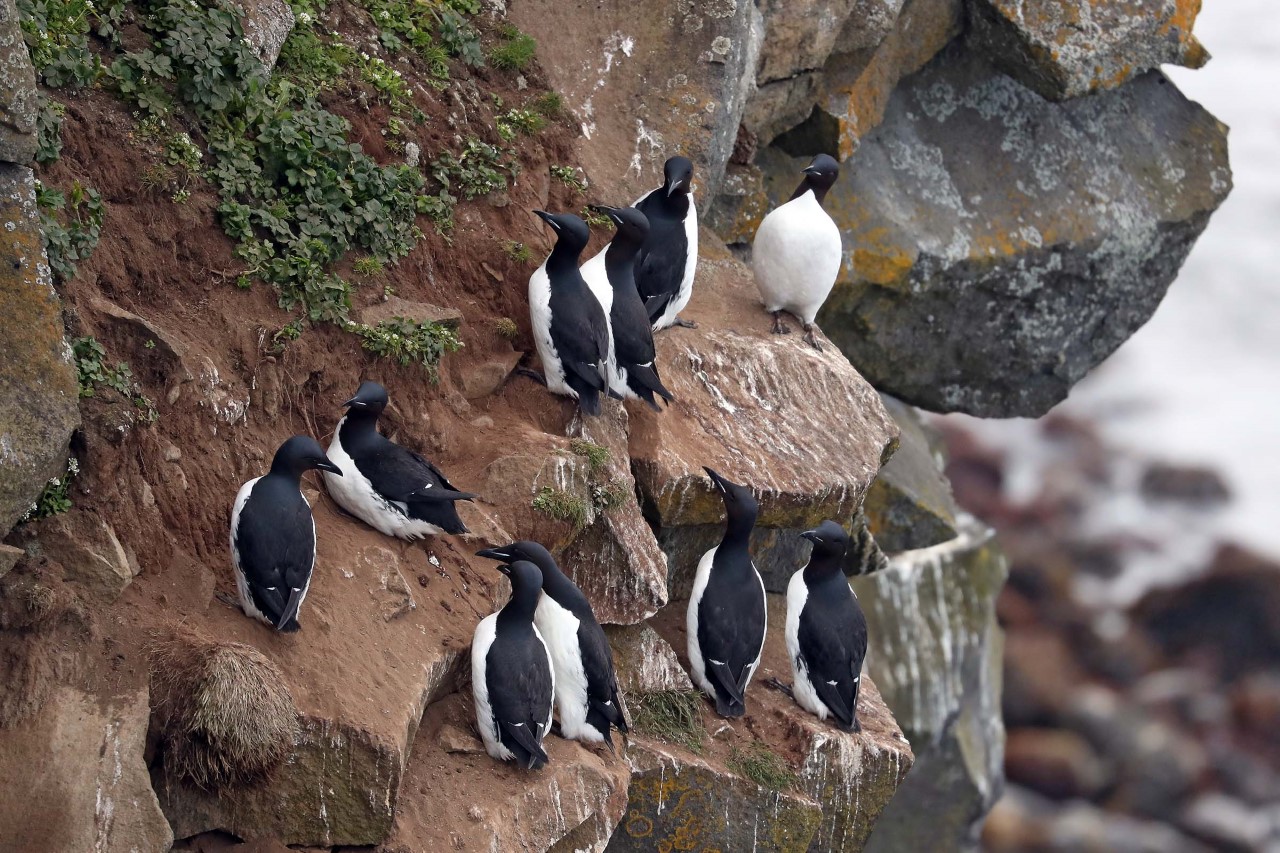 Below: As with the other auks I wrote about earlier, like puffins, murres have dinky wings for their body mass and have to fly fast to maintain lift. Landing is tricky, not only because the birds have to slow down to land (which they do by curving upward and letting gravity apply the brakes) but also because they are often greeted by an ‘unwelcoming party”. Note the dagger-like beaks all directed towards the incoming Thick-billed Murre from the group of birds on the ledge: clearly they are giving the message “don’t even think about landing here”. 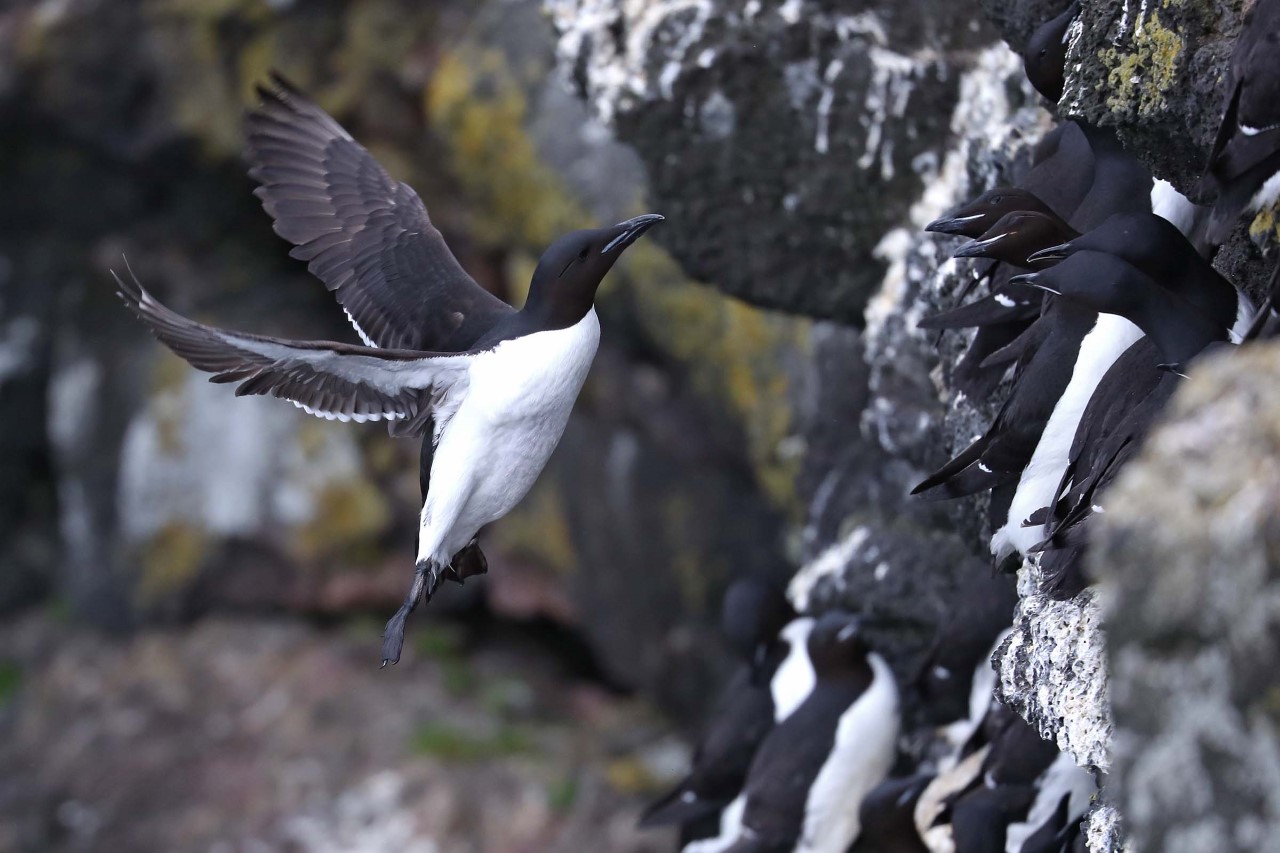 Below: A couple more photos of murres in flight. Note that as they come in for a landing they splay their webbed feet out; presumably they get lift or some sort of stability from this. I think the top one is a Common Murre and the bottom one is for sure a Thick-billed Murre. 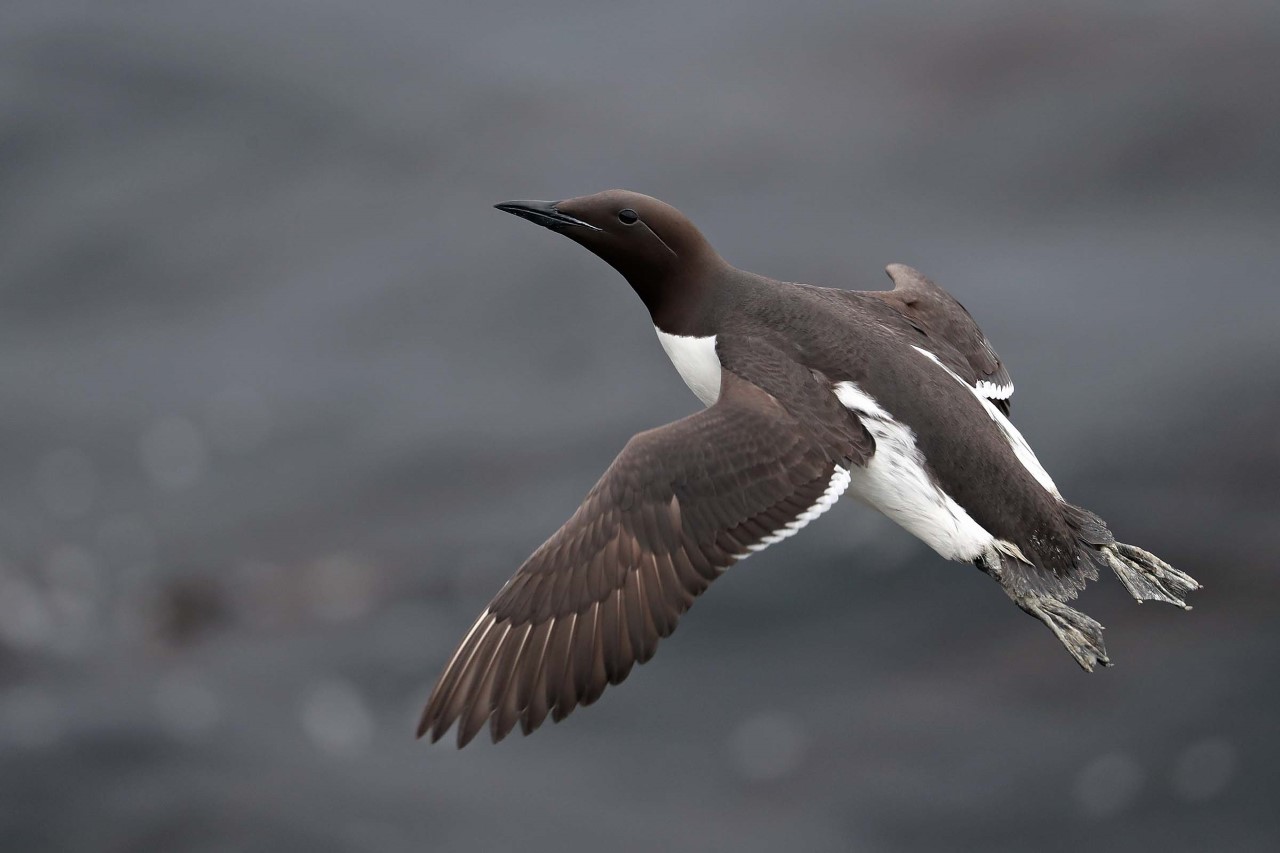 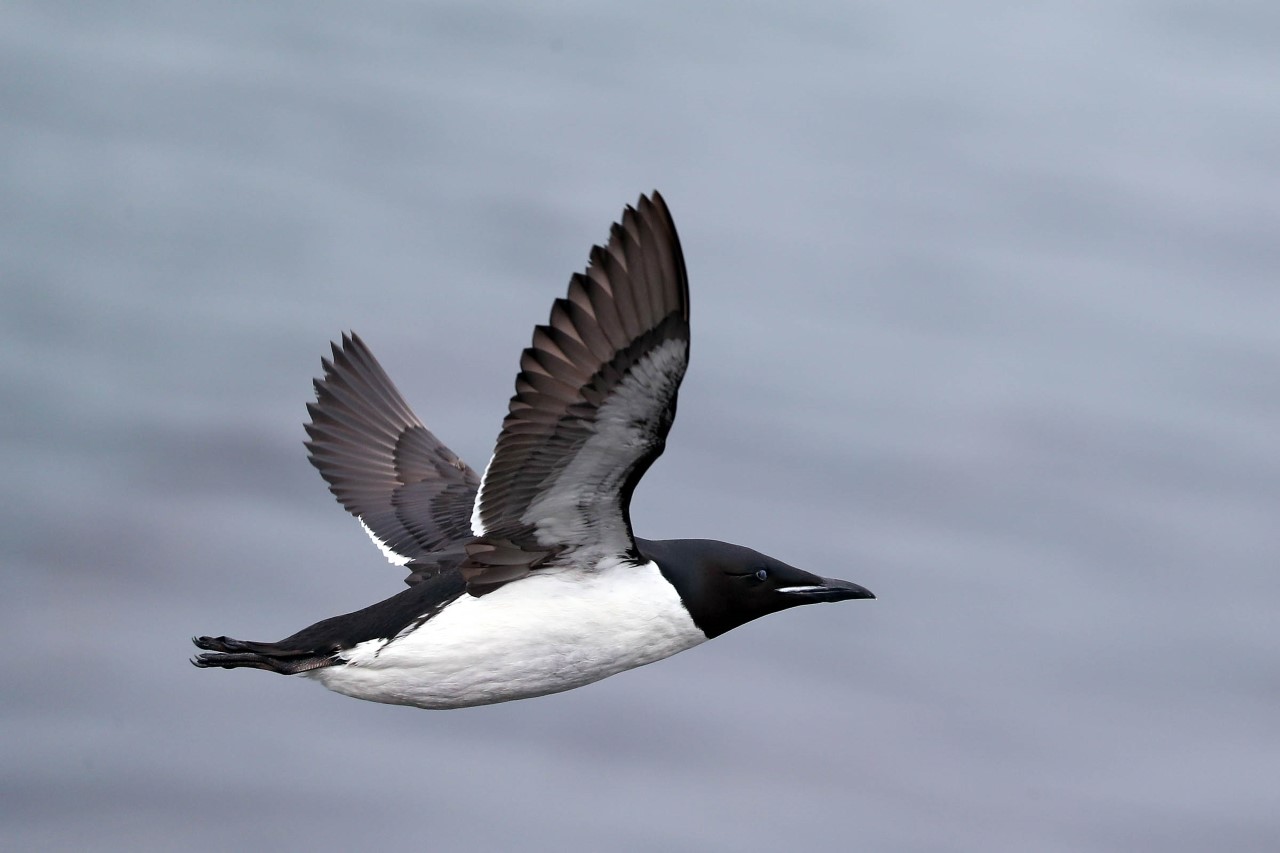 Below: Murres are famous for laying very pear-shaped (pointy) eggs. When I was a kid, the bird books all had a nice adaptive story about how this pointy shape is adaptive for cliff nesting: the idea is that pointy eggs roll in a tighter circle than other egg shapes, reducing the chance that the egg will roll off the nesting ledge if accidentally kicked or dislodged. This idea has recently been challenged and a couple of new explanations have been proposed. My favorite idea is that the shape is adaptive for nesting on sloped ledges—apparently a pear-shape egg is more likely to stay put on a sloped ledge. An experimental study, confirming that egg shape does affect stability on a sloped ledge, by Tim Birkhead, Jamie Thompson and Bob Montgomerie, is described in a blog post here.

Murre eggs are also beautiful and remarkably variable in color and markings. Studies reveal that murres can recognize their own eggs by the color and pattern, so presumably the extreme variation makes egg recognition easier or more accurate for the birds given that they nest in dense colonies. (NOT MY PHOTO, borrowed from online). 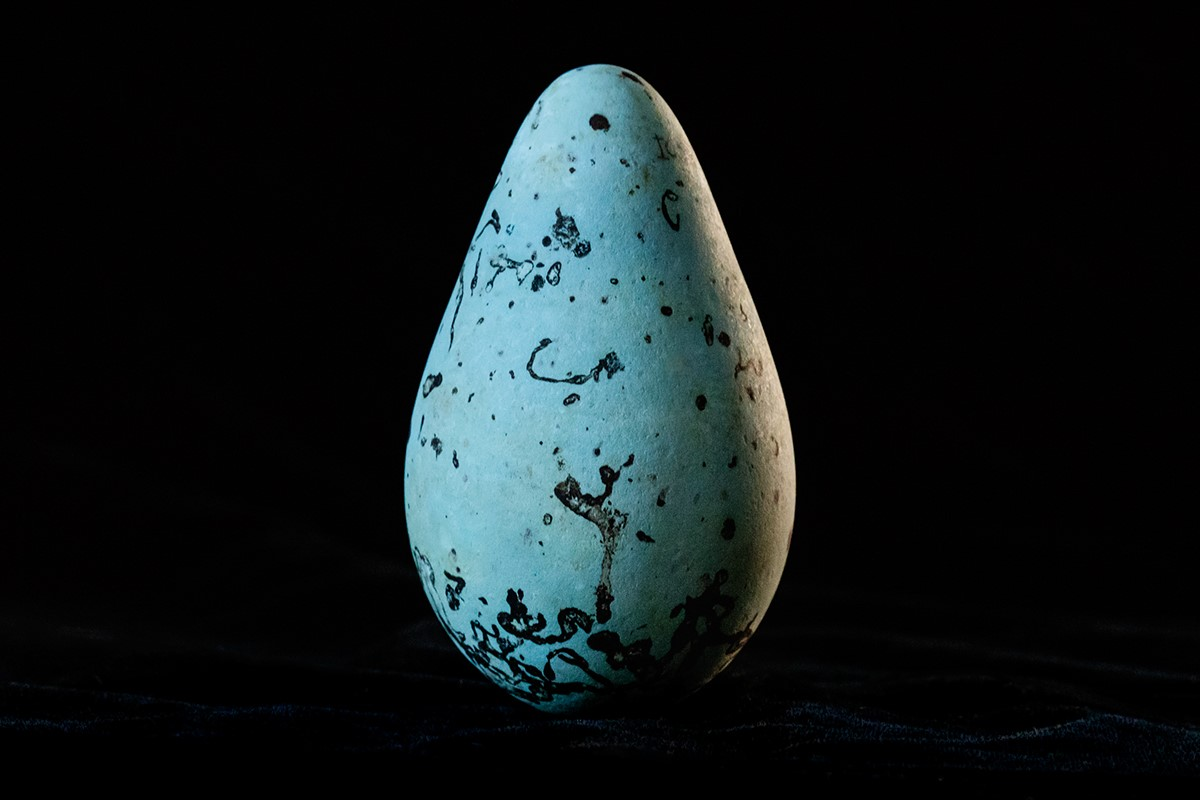 Below: Kittiwakes build nests of seaweed, mud, and grass perched on precarious cliff ledges. This is a Black-legged Kittiwake. Red-legged Kittiwakes were pretty uncommon but the few nests we saw were tucked further back in little nooks and crannies. 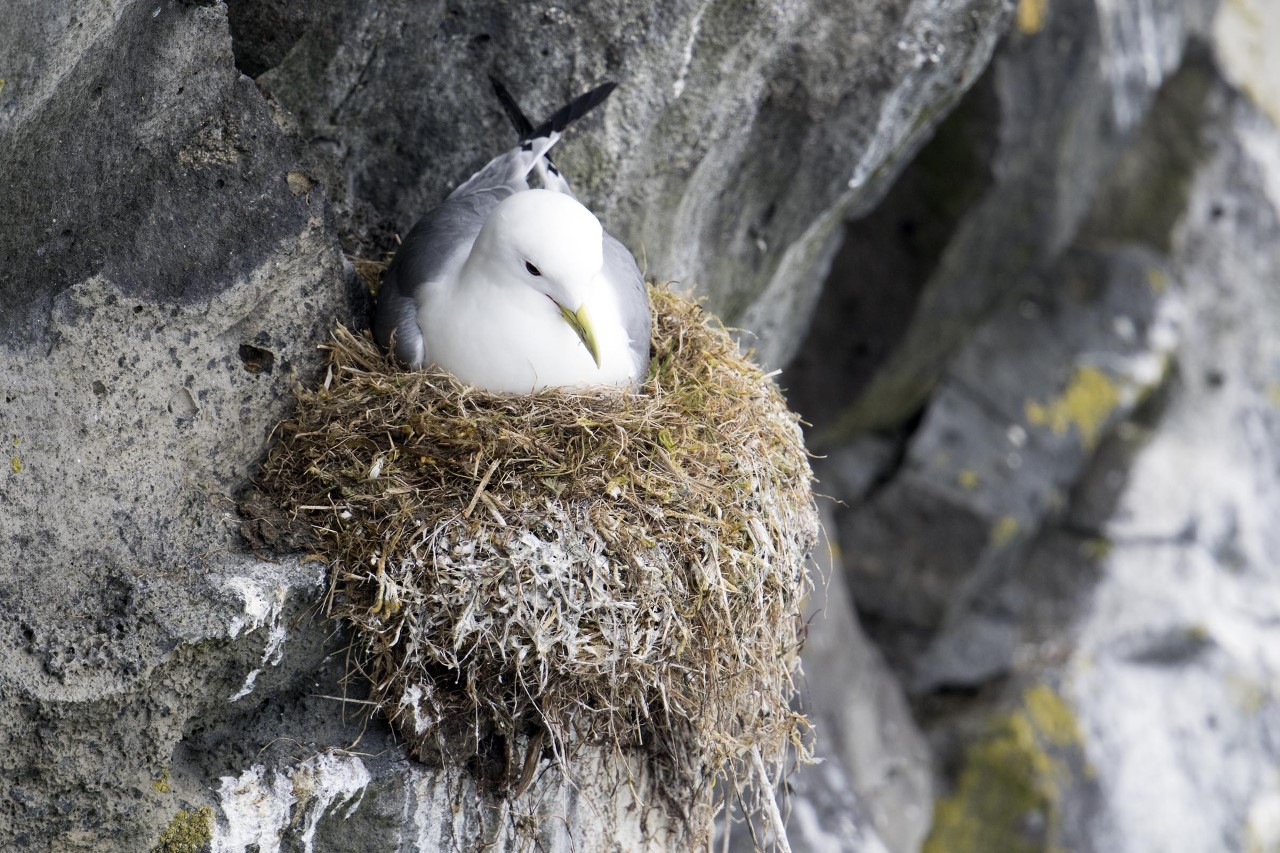 Below: It seemed like peak nest-building season for the kittiwakes, and we had fun watching them fly in groups to their favorite areas for harvesting mud or vegetation for their nests. The area below was visited by so many kittiwakes that they had removed the vegetation and upper layer of soil from a large strip of land. 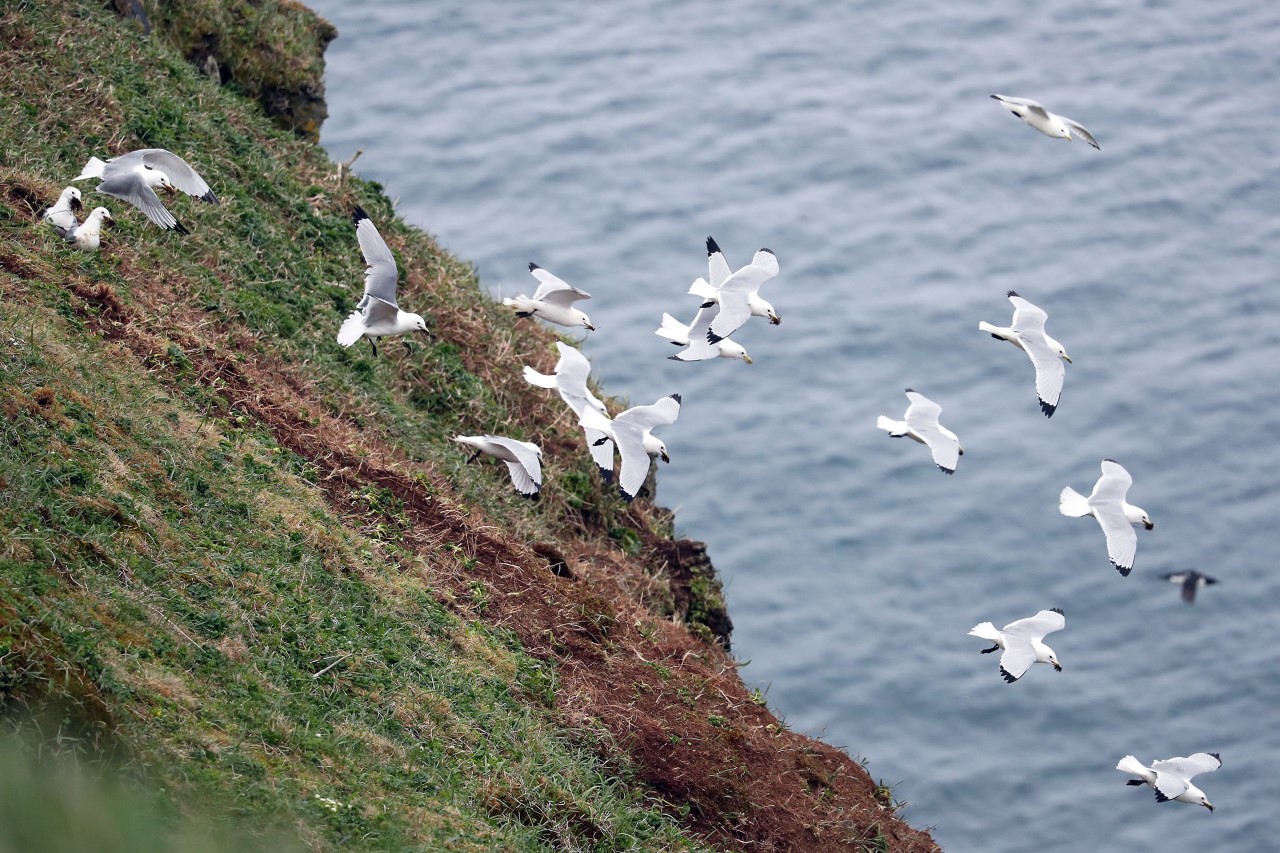 Below: A Red-legged Kittiwake flying with nesting material towards its nest. 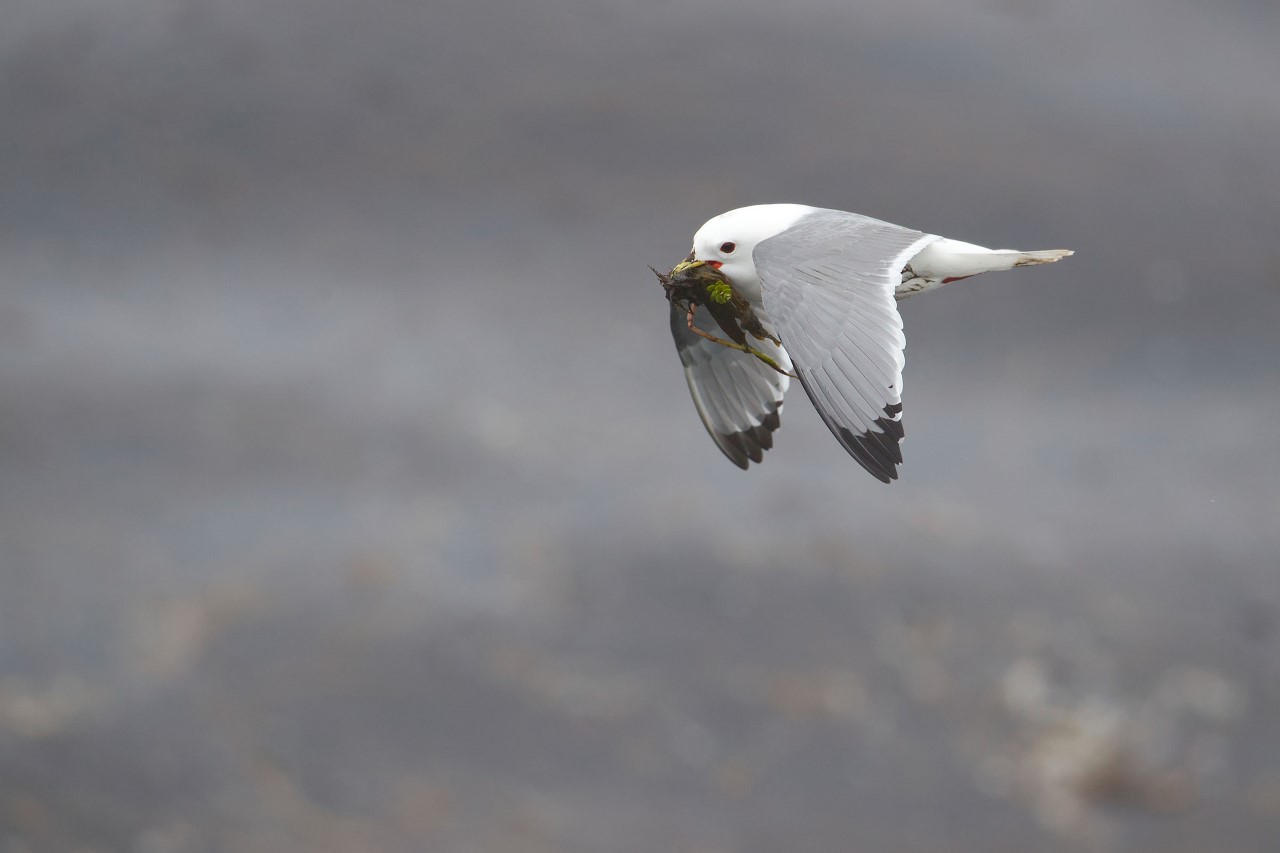 Below: Another Red-legged Kittiwake. In addition to the red legs and feet, this species differs from its black-legged cousin by having darker wings and a considerably shorter beak. 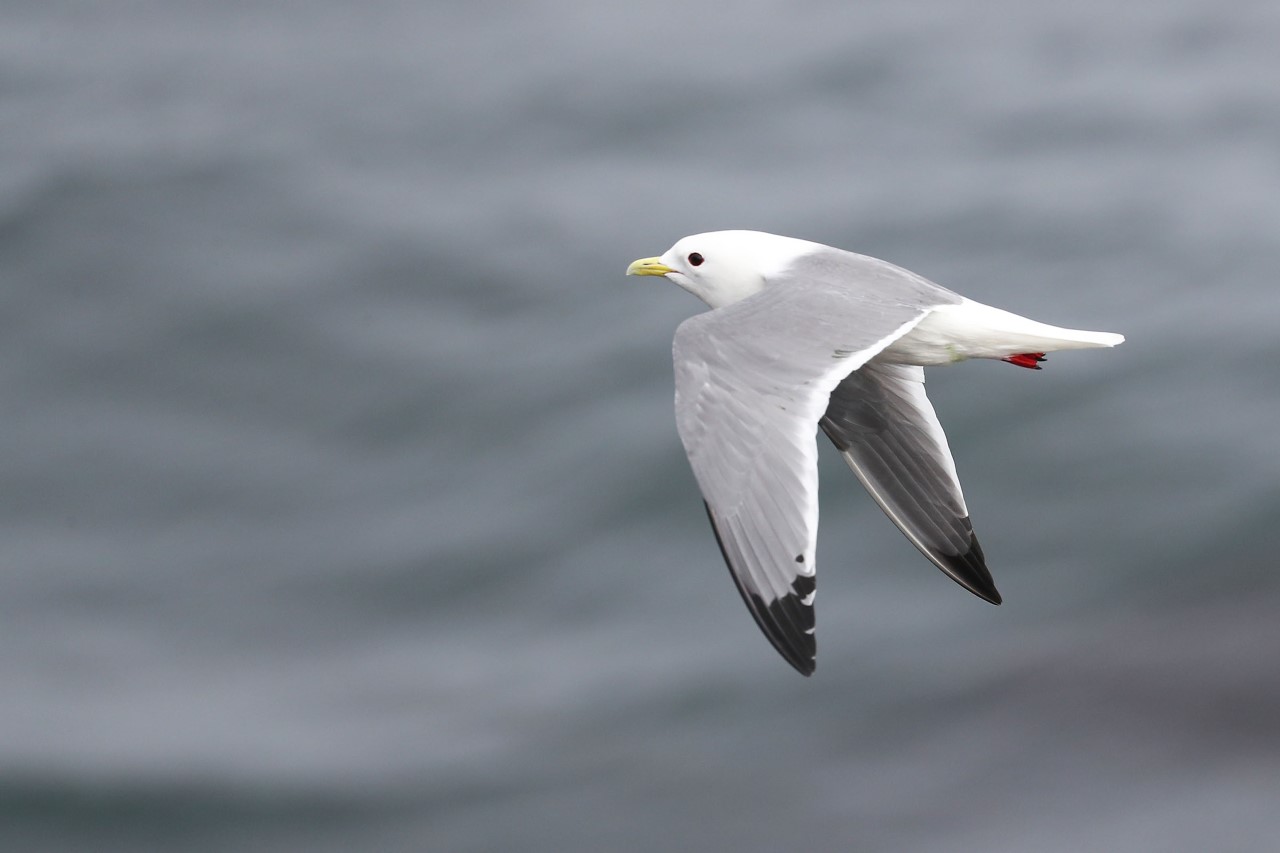 Below: On windy days the air currents close to the cliffs can be wicked. Kittiwakes are masterful fliers and handle this turbulence well, spinning and pirouetting in place as they approach their nests on the cliff face. This is a Black-legged Kittiwake turning on a dime. They often seem to dangle their legs when spinning and dancing in the air—I suspect there is an aerodynamic reason for this. 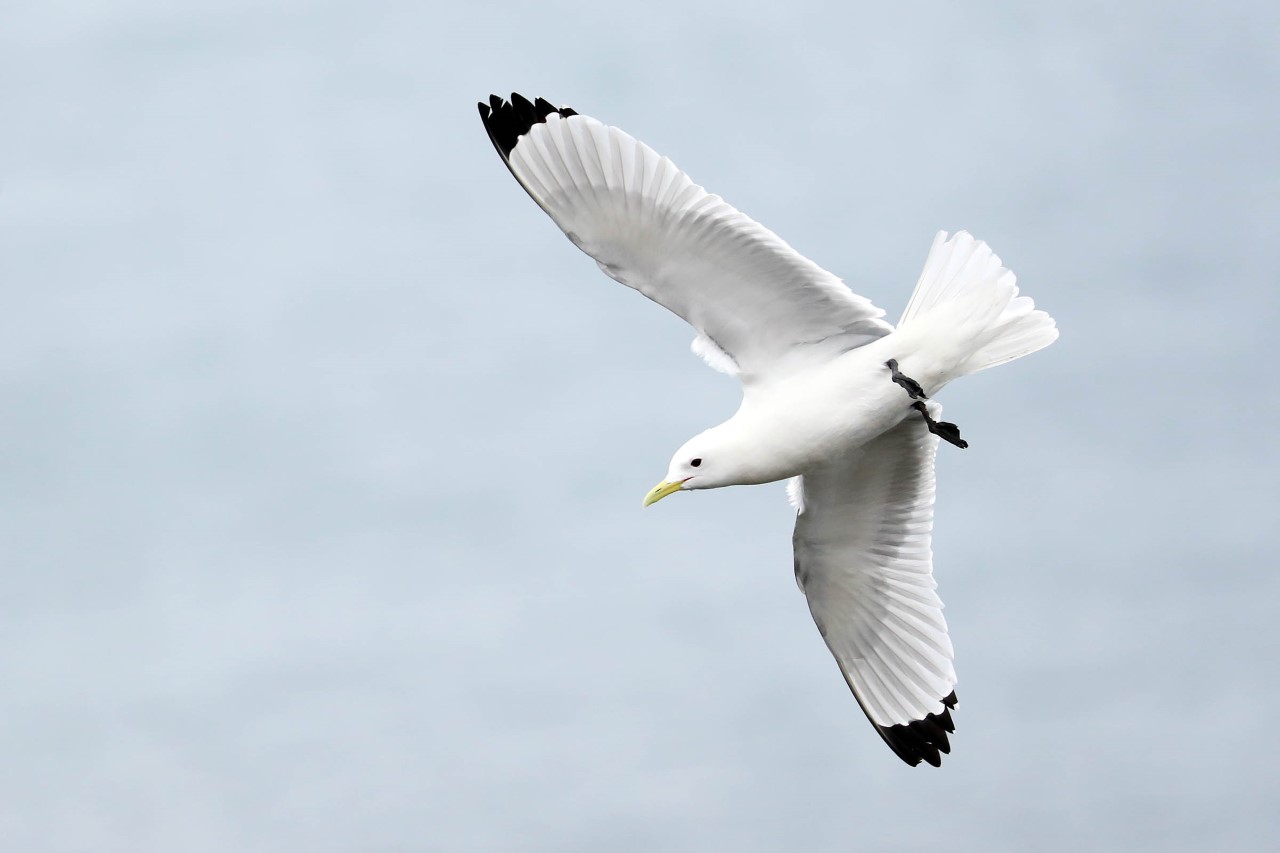 Below: Finally, the elephant fox in the room. Like oil and water, foxes and seabirds do not mix—when foxes are present on seabird islands, the results can be devastating, particularly where foxes are not native and have been introduced by people. However, Arctic Foxes (Vulpes lagopus) do appear to be native on the Pribilofs but not the Aleutian Island chain of islands further south. Arctic Foxes are fairly abundant on St Paul Island, including right in town, where I photographed this individual. 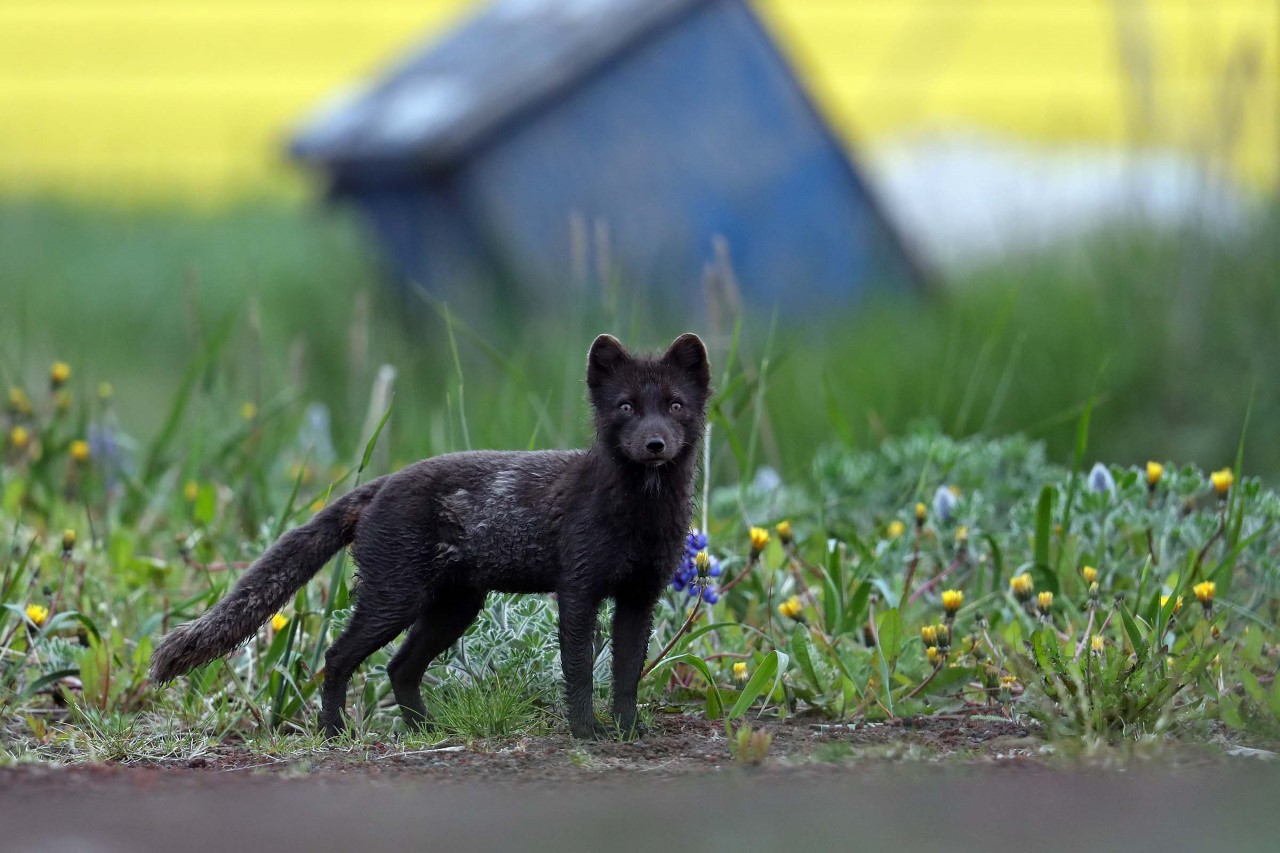 Below: We were surprised to learn how well foxes can climb. While watching seabirds on a cliff we suddenly noticed a fox taking a nap half way up the cliff. This climbing ability, and their voracious appetite for seabird eggs, chicks and adults, must select for the seabirds to use particularly safe ledges compared to islands that are fox free. The Aleutian Islands were fox free until foxes were introduced to over 400 islands in the late 19th century to establish populations for a fur industry. The results were devastating for the seabirds, and had cascading effects for the entire entire ecological communities on the islands.

Not all of the islands got foxes, and comparison of islands with and without foxes creates an experiment to look at the effect of foxes on seabirds and on island ecology generally. My colleagues here at the University of California, Santa Cruz, Don Croll, Jim Estes and Eric Danner, did a lovely study that involved a massive survey of the Aleutian Islands, surveying islands with and without foxes and collecting lots of ecological information. Islands with foxes had far lower seabird densities than islands without foxes (100 times lower densities when foxes are present). The two types of islands also had a very different appearance because the nutrients the seabirds transport from the sea to the islands affects the vegetation. Nutrients from the sea (the birds’ prey) are brought to the islands and deposited as a natural fertilizer in the form of bird guano. Because the seabirds often nest in huge colonies, the amount of natural fertilizer brought to the islands can be massive and can change the vegetation structure in a big way. My colleagues found that islands with foxes and few seabirds had a very different vegetation structure than fox-free islands due to differences in nutrient transport through guano. This is a nice example of the strong ‘top down’ effects that predators can have on entire ecological communities. 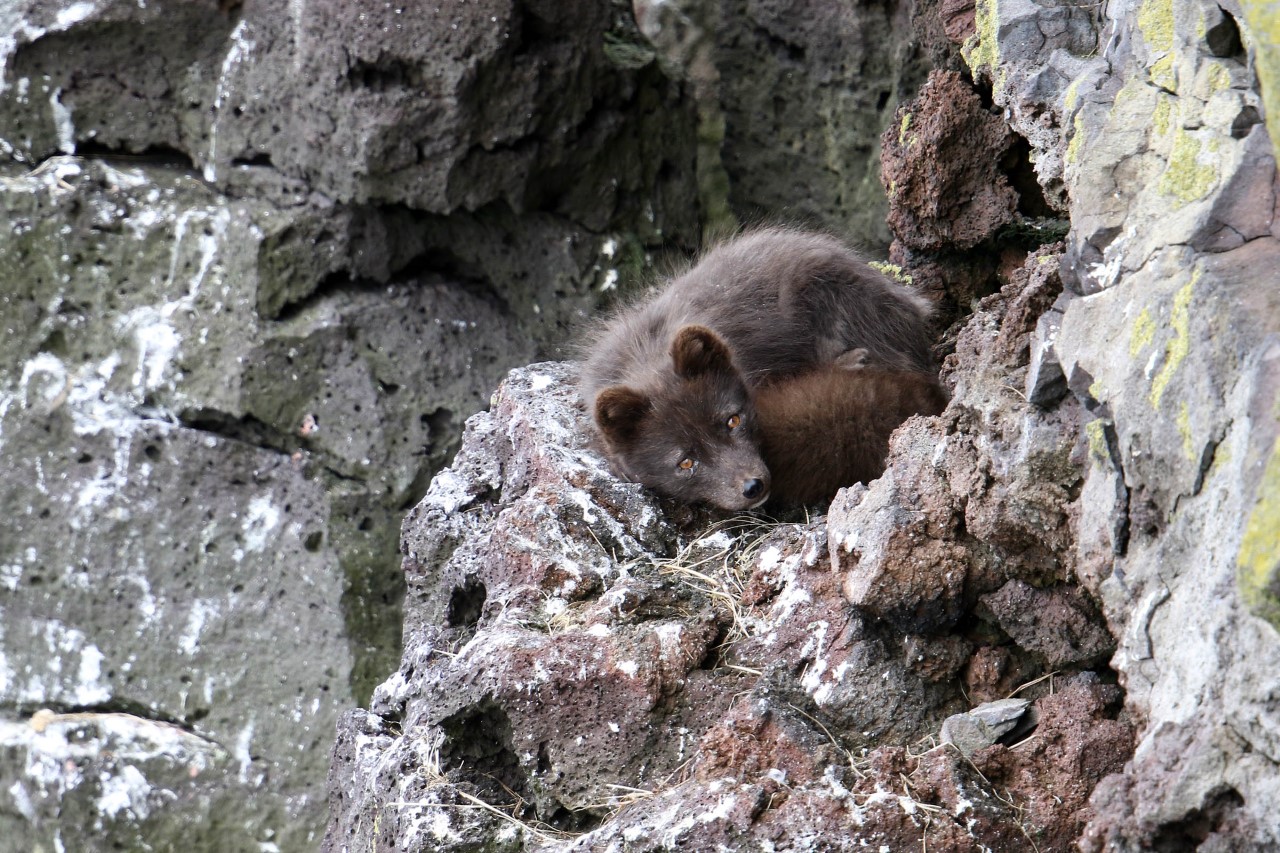