When I put up one of my frequent posts about the ideological follies on American campuses—and yes, these often involve the Left—I’m sometimes told that these follies are irrelevant, and I should pay them no attention. It’s only a fringe element, people say, and the students will grow out of their Wokeness when they graduate. (Another criticism, along the lines of “Why don’t you go after Trump instead?”, is not worth answering today.)

My response has been that campus extremism may involve only a minority of students, but it’s a vocal minority, and that minority is the group that will take over—and has taken over—Leftist politics and media, as well as institutions like the schools themselves. (Campus administrators and professors are about as Leftist a group as you’ll find in “regular” jobs.)

Now I count myself among the Left, too; I’m referring here to Woke, identity-politics Left in which the other side is completely demonized, in which trivial issues like cultural appropriation are argued fiercely, in which personal narratives and victimhood take precedence over injustice to groups, and in which there is a hierarchy of victimhood with greater authority devolving to those on the bottom (or, rather, the top). The dangers I see of the Authoritarian Left (AL) is that it is authoritarian. It has no room for compromise, essential in much of politics, it lacks empathy, it polices the most trivial issues, promoting a loss of perspective on what’s important (viz., the demonization of Israel versus far worse countries like Syria and North Korea, or, for that matter, the Palestinian Territories), and turns everything into an ideological narrative of oppression and oppressors.

And student-inspired Leftism is already dominating the media as the ALs move into newspapers and magazines. I’ve already beefed about the New York Times, and you can see the same AL-ism polluting New York Magazine, the New Yorker, and other liberal venues. So no, the Authoritarian Leftism of college is not something to be ignored. Unless we manage to make it saner, it is the future of the leftist and Democratic politics.

In this I agree with Andrew Sullivan, though he’s a conservative—or claims to be. In his weekly tripartite New York Magazine column, after writing a long and welcome tirade about the insanity of Donald Trump—whom he calls a “malignant narcissist” as well as “bizarre, dangerous, deranged, and ignorant”—Sullivan has a section about the fulminating Wokeness of society. Click the screenshot below: 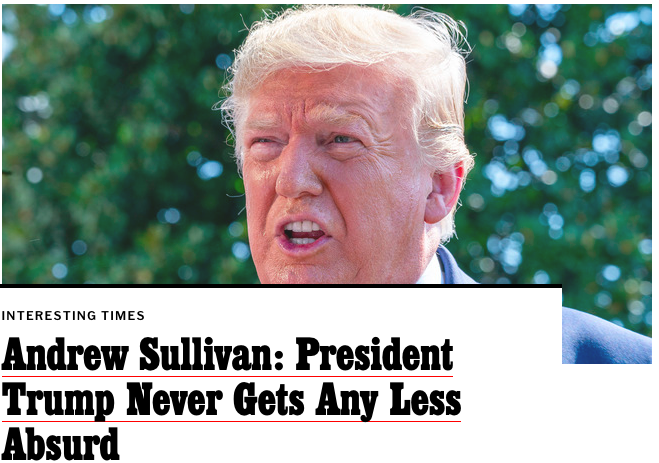 Sullivan’s springboard is something I already wrote about: the proposed K-12 curriculum changes in California, involving an “ethnic studies” curriculum that is Woke in the worst sense. (As of three days ago, that bill had been delayed, but I assure you, something similar will be enacted.) Sullivan sees this, rightly, as a form of indoctrination, and, although he sounds a bit curmudgeonly, he’s right:

For the longest time, whenever I’d raise the alarm about the impact of campus extremism, I’d be told I was hallucinating, that it was only a fringe issue, and that it had no salience beyond a few Ivy League bastions of lefty intent. Critical race, queer, and gender theory were just academic fads — without any real impact on the broader population. The fact that major corporations had adopted these theories as the basis for their employment practices, that the mainstream media presents this ideology as self-evident, and that an entire elite generation has been told that the United States was founded on and is defined by brutal racism, did not seem to count.

I think that in the last bit Sullivan is referring to the New York Times‘s 1619 Project: a well-motivated but poorly executed journalistic series that is becoming into the greatest instance of media virtue-flaunting and mass shaming I’ve seen in my lifetime. But Sullivan goes on about California:

Now comes a proposed K-12 curriculum in California that would enforce these new orthodoxies on the high-school population. It would teach kids in an ethnic studies course how to “critique [sic] empire and its relationship to white supremacy, racism, patriarchy, cisheteropatriarchy, capitalism, ableism, anthropocentrism and other forms of power and oppression.” The aim is to “connect ourselves to past and contemporary resistance movements that struggle for social justice.” Children will learn to spell women as “womxn,” and be versed in what critical race theorists call “misgynoir.”

Now, one might expect New York Times reporters to believe that “racism and white supremacy [are] the foundation of all of the systems in the country,” but you can choose not to buy the Times. Public schools? Mandatory. This is where the real action is in “reframing” the entire idea of America.

And so kids in high school in the biggest state in the country would no longer be learning history, but “hxrstory.” They would be instructed in the reality of “cisheteropatriarchy.” They would be told that there is no debate about race or gender or sexuality, just a choice between siding with oppression or liberation. They would be instructed that capitalism is a function of racism. Since California has mandated that, as of 2024, all kids will have to endure a semester of these “ethnic studies” to graduate, the possibility of mass indoctrination is real.

. . .the closed circle that wrote the report — the 20-member Ethnic Studies Model Curriculum Advisory Group — was simply reflecting what is now the received wisdom in American higher education. Hence the need to include a study of “borders, borderlands, mixtures, hybridities, nepantlas, double consciousness and reconfigured articulations, even within and beyond the various names and categories associated with our identities.” What?

Give me the child from K-6 and I will show you the man—and woman.

As I said, there has been extensive pushback against the California reforms, and the curriculum revision has been shelved—for the moment. (As Sullivan notes, “Even the Los Angeles Times found it to be agitprop masquerading as scholarship.”) Sullivan sees this as a sign of hope, as the rejection of “an ideology that is as totalist as it is intolerant of dissent.”

But I don’t share Andrew’s optimism. One overwhelming reason, which I’ve seen over and over again is this: any pushback against these kinds of changes is met with accusations of racism and bigotry. And nobody on the Left wants to be called a racist or bigot. It’s too easy to demonize yourself when others demonize you, and then you’re cowed into silence. This is the reason why opposition to Wokeness seems futile to me. I continue to call it out when I see fit, and my reward is to be called an “alt-righter” by many. So be it.

Yes, of course there are moral improvements to be made in society. The most important one, I think, is to assure equal opportunity for everyone starting from the outset: infancy. Everyone should have schools of high quality, access to health care, good food, and the like, and an education in which everyone gets a chance to be what they want. But what we are seeing is a push for equal outcomes, and if you don’t favor that you’re a bigot. The fight between those who favor equal opportunities and those who demand equal outcomes is the greatest battle that the Left faces in our era.

If you disagree, or want a palliative, there’s always Sullivan’s first piece on Trump, where you will enjoy prose like this:

His physical appearance is absurd: the fake orange tan, with the white circles around the eyes, the massive, hair-sprayed and dyed pompadour. How many people in public life look anything like that? His endless lies and contradictions are absurd. And his psychological disorder — the narcissism that guards against any hint of his own absurdity — is getting obviously worse. And it was always going to get worse. Someone with malignant narcissism has a familiar path, as Elizabeth Mika presciently wrote the week after his inauguration:

It’s not only that he will never get better, but it is certain that he will get worse. There has never been a case of a malignant narcissist in power whose pathology improved, or even remained stable: They always deteriorate, and often rapidly, as they become drunk on (what they see as) now unlimited power and adulation.