Today we have part 3 of Bruce Lyon‘s birding trip to Alaska; today there’s a lot of science, so be sure to read the text. It’s about mutual sexual selection: a theory meant to explain why, in some species, both males and females are ornamented or brightly colored. (In most species that are ornamented or brightly colored, that adornment is limited to males, which is explained by conventional sexual selection.)

Today’s post follows on two previous posts (here , here) about St Paul Island, which I visited this past June with Bob Montgomerie. The island has a rich diversity of seabirds, including 3 of the 4 species of the Aethia auklets. These small seabirds, endemic to the North Pacific, all have ornamental face plumes and beaks, and some have been the focus of classic evolutionary studies, by Ian Jones and colleagues. Jones is the authority on these auklets, having first started working on them when he did his PhD with Montgomerie in late 1980s.

Below: Parakeet Auklets (Aethia psittacula) were the most common auklet on St Paul.  Like puffins, they nest in crevices in the cliffs. They have an odd bill shape, which gives them their name. This shape is likely related to their diet—they eat slimy prey like jellyfish and comb jellies (ctenophores) as well as small crustaceans like amphipods. 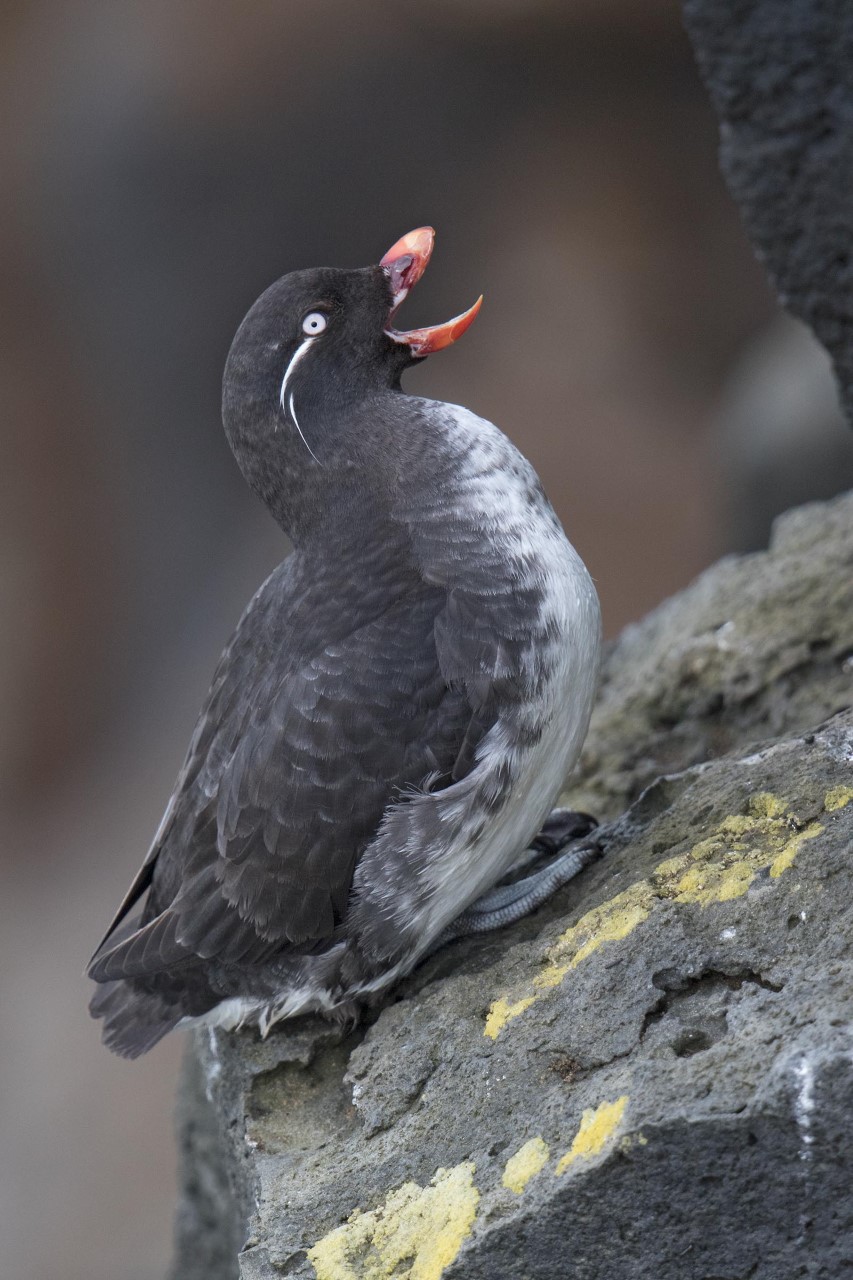 Below: We saw lots of bickering, often involving threesomes. It was unclear whether the commotion was over mates and mating or over nest sites. High quality nest cavities might be limiting and worth fighting over. Parakeet auklets, and both species of puffins, spend a lot of time sitting in front of their nest cavities, and it seems like they are guarding them. 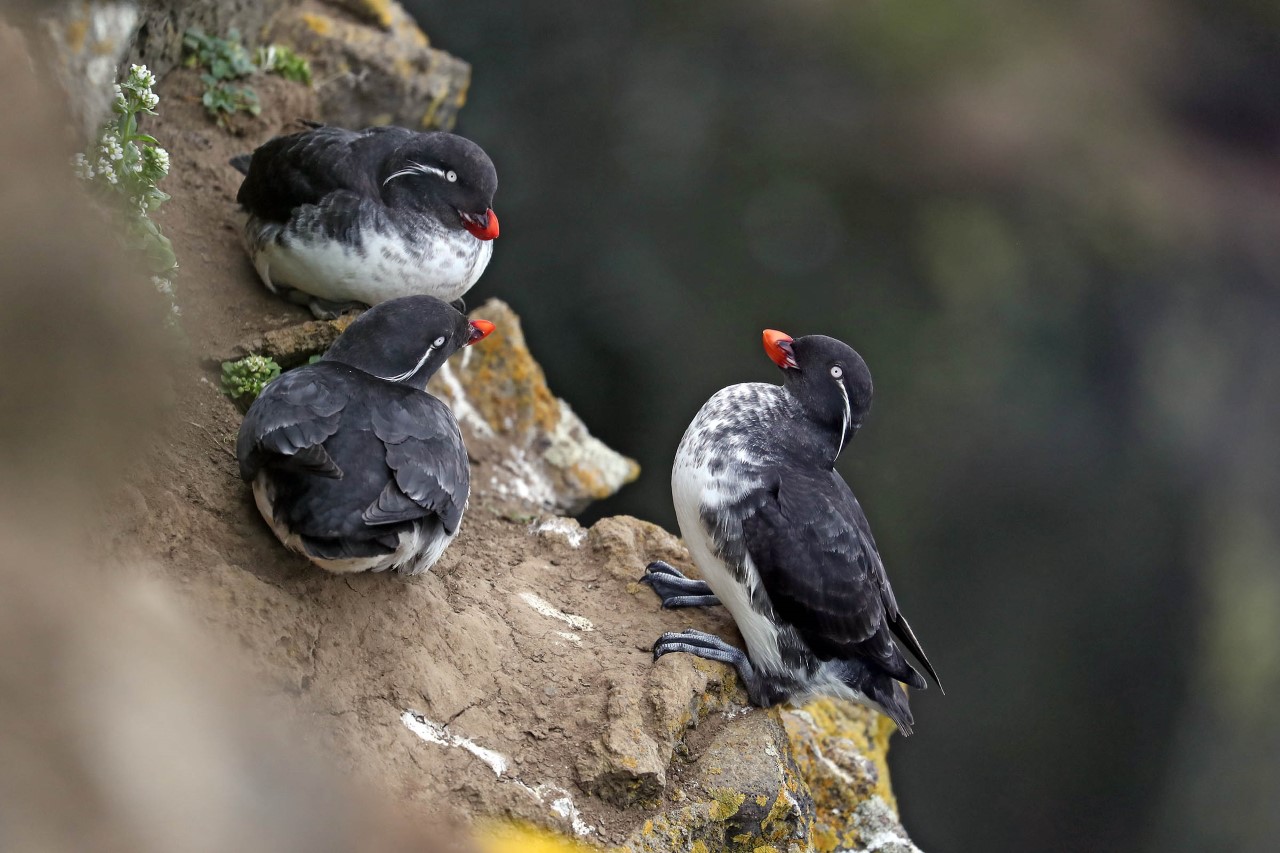 Below: A Horned Puffin (Fratercula corniculata) supplants a Parakeet Auklet from a rocky ledge. Apparently they both wanted the same perch. 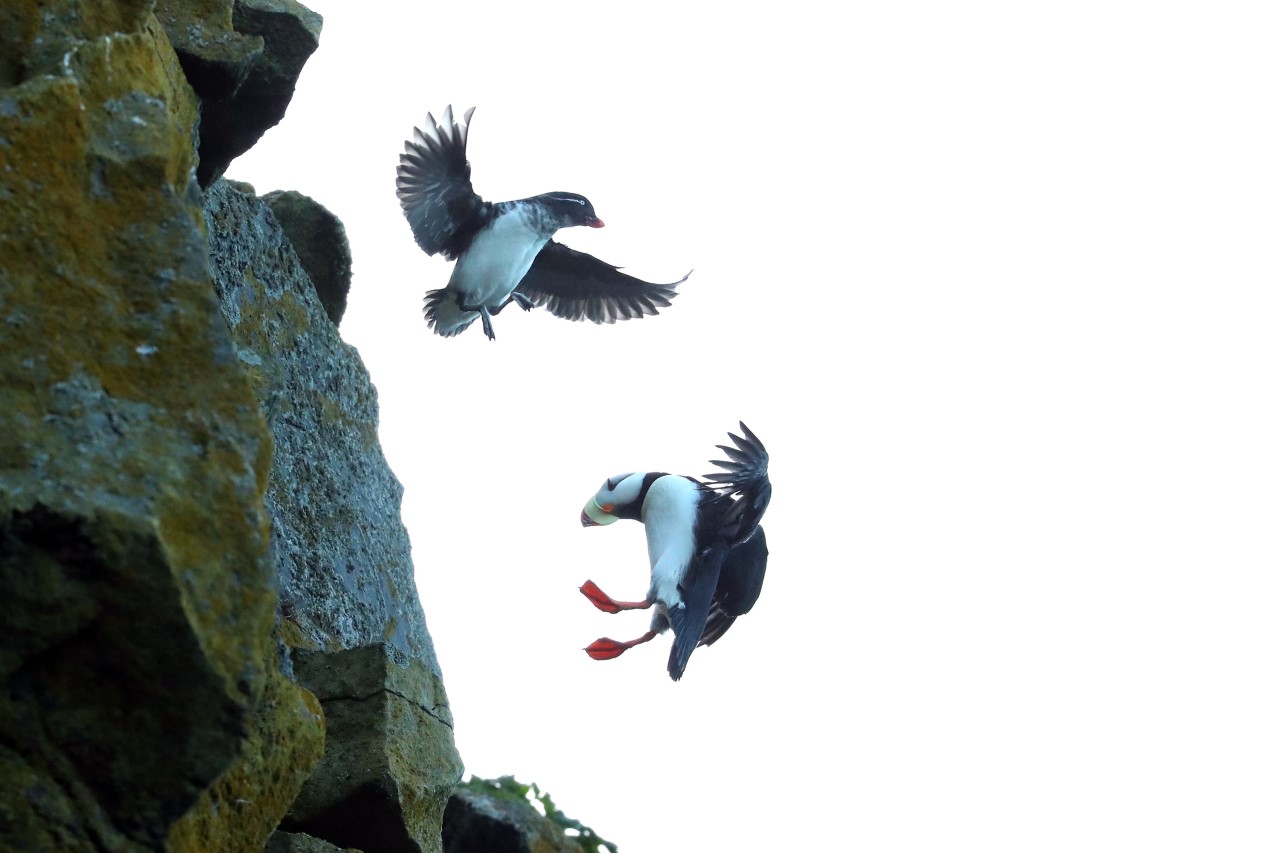 Below: Parakeet Auklet in flight. 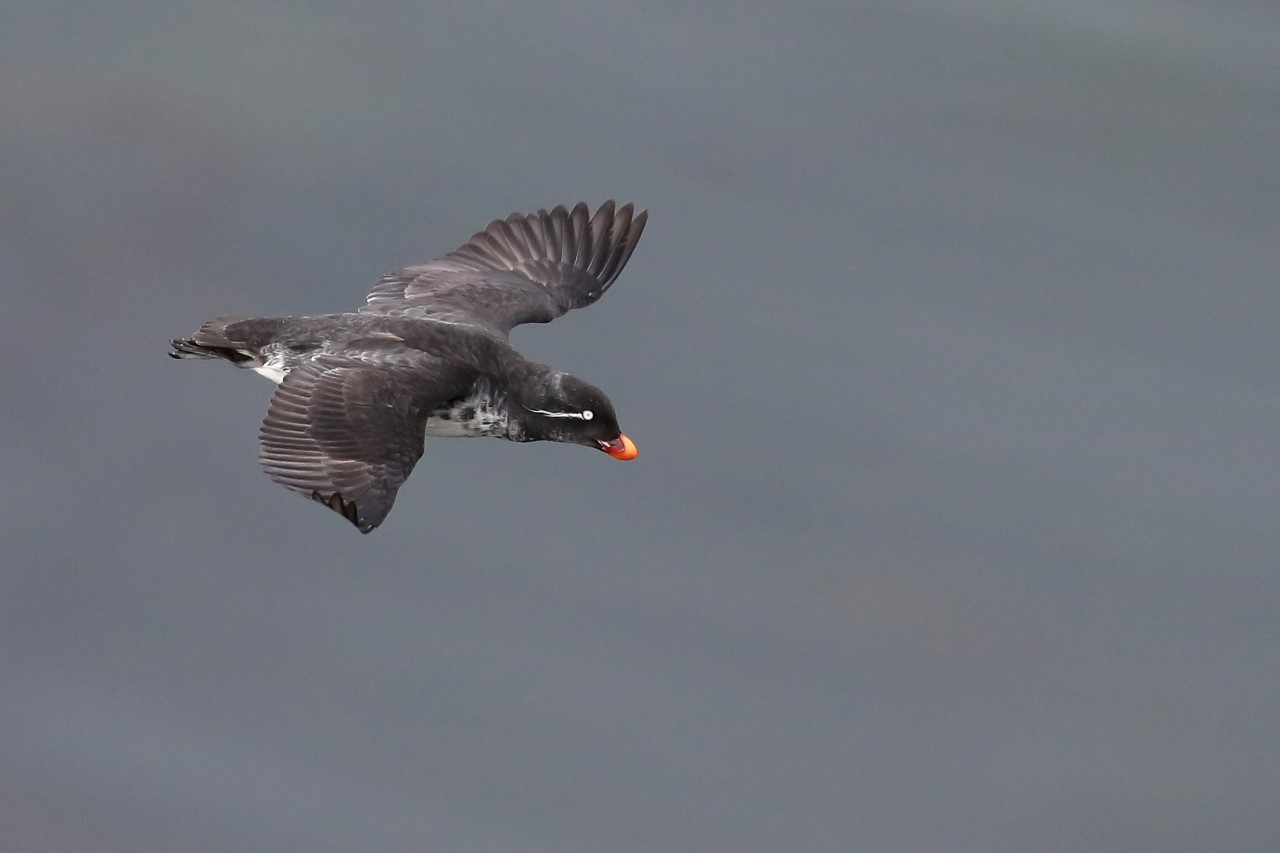 Below: The auklet I was most excited to see was the Crested Auklet (Aethia cristatella), partly because it is so charismatic and interesting, but also because it has been the focus of a now-classic study of mutual sexual selection. They are not very common on St Paul, but we did manage to see them a couple of times. 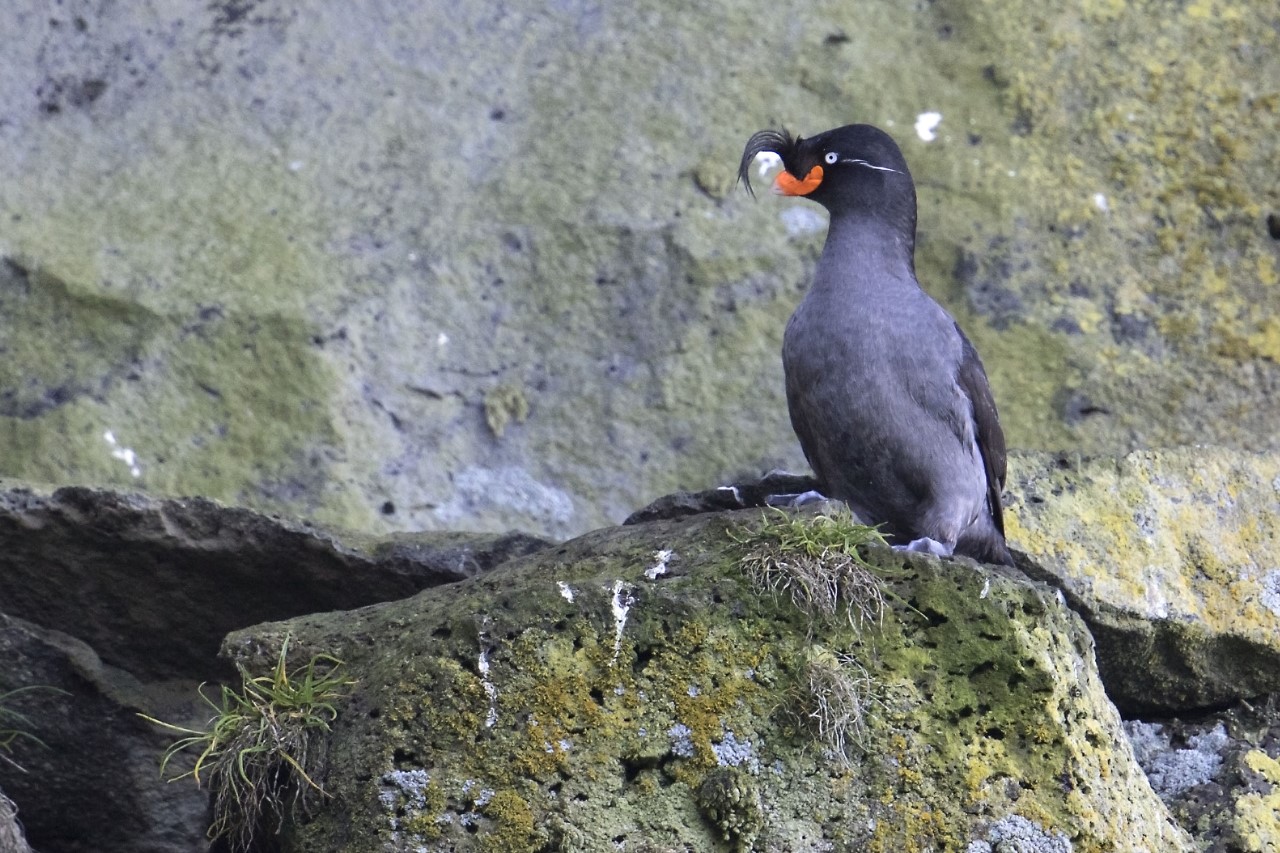 Below: A pair of Crested Auklets framed by three other species of auks. 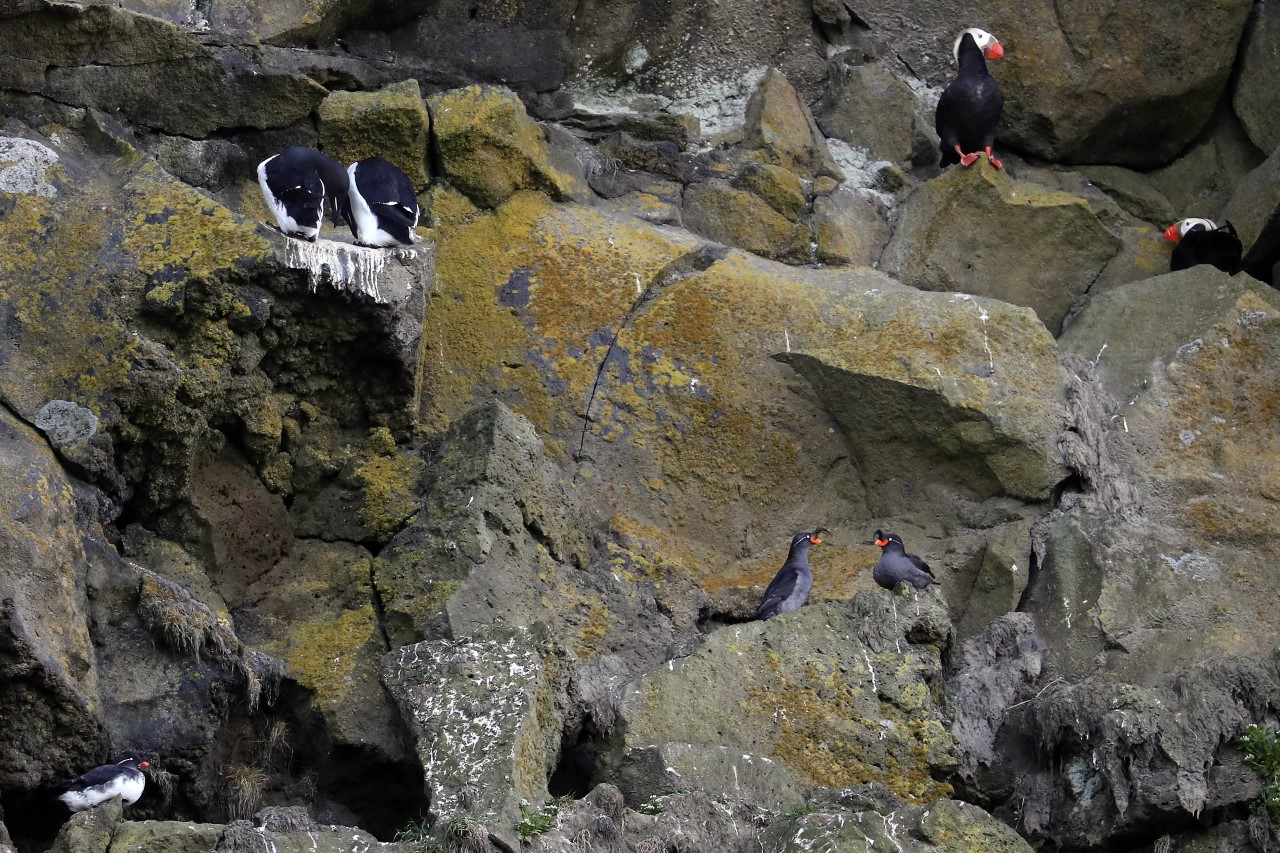 Below: MUST SEE VIDEO! Still photos simply do not do justice to this fabulous bird, so below is a lovely compilation of video by Ian Jones from his studies on Buldir Island, way out near the end of the Aleutian Island chain. Note the courtship behavior, including trumpeting and sniffing each other’s necks. Note also the dense murmurations in flight—likely defenses against the gulls and peregrine falcons that prey on these birds. I think this is one of the most interesting birds in the world. Least Auklets (Aethia pusilla) also make a brief cameo in the video.

Mutual sexual selection: Like puffins, both sexes in Crested Auklets (and many other seabirds) are similarly colorful and ornamented. One possible explanation for this pattern is Darwin’s idea of mutual sexual selection—both sexes have preferences for mating with the most ornamented individuals of the opposite sex. In standard sexual selection, individuals with the sexier traits (ornaments) are favored because they get more mates and therefore more total offspring. Mutual sexual selection applies to monogamous species, so the number of mates does not come into play. Instead, mate quality could be important, and a sexier, high-quality mate could provide one or more benefits to the choosy individual showing the preference for the ornamentation: a high-quality mate allows the pair to breed earlier in the season when there is more food for chicks, or a high-quality mate provides more food to the chick or is better able to defend a high-quality nest site. Darwin outlined the basic idea in his sexual selection book but then quickly shot it down himself in the same paragraph: “But from what we know of the habits of animals, this view is hardly probable, for the male is generally eager to pair with any female. It is more probable that the ornaments common to both sexes were acquired by one sex, generally the male, and then transmitted to the offspring of both sexes”. In other words, females are colorful for no reason other than they inherit genes that are adaptive for males.

It turns out Darwin was wrong about his idea—it can work! The first evidence for the theory came from a lovely experimental study of Crested Auklets at Buldir Island by Ian Jones and Fiona Hunter, both postdocs at Cambridge University at the time. They did experiments using stuffed Crested Auklets—they had male and female stuffed birds (“models”) and each stuffed bird could be given either a small crest or a large crest (replaceable crests!). The researchers placed the models out in the breeding colony at ledges where the birds hang out and socialize, a single model per trial, and observed the responses of males and females to the different models.  It was critical to be able to identify the sexes of the birds that responded to the models. However, because the nesting colony was so large, many of the birds responding to the models were not color banded and individually recognizable. However, the responding birds could be sexed from a distance with binoculars because males and females differ quite a bit in beak size and shape.

The models were courted by lots of individuals, and these individuals showed the same rich repertoire of courtship behaviors that real birds show during courtship, so it seems the birds were at least initially fooled by the stuffed models. Strikingly, males courted the stuffed female models and showed much stronger responses to female models with larger crests than with smaller crests. Similarly, females courted the stuffed male models and showed stronger responses when the models had long crests. Clearly, both males and females are interested in mates with bigger crests, as assumed by mutual sexual selection. The experiment did not reveal how the birds benefit from their preference for long crests—i.e., why be choosy?—but Jones and Hunter speculated that birds with larger crests would pair sooner and gain reproductive benefits from breeding earlier in the season. In a later study, Jones and colleagues showed that crest size increases with age so preference for larger crests may be driven by the benefits that come with an older and wiser mate.

Below: These birds are also unusual in other ways—they smell like tangerines! The photo below, by Ian Jones, shows a mating scrum of Crested Auklets. Two of the birds are performing a ‘ruff sniff’ to smell the crazy tangerine scent that is strongest at the base of the neck. Jones and colleagues did some additional model presentations, adding the tangerine scented compounds to some of the stuffed birds. Although they did not find clear evidence for mating preference for the scent (no sexual displays), the models with scent were approached more closely, by both sexes, suggesting some sort of social function. Other experiments with mazes that offered the birds with a choice of different scents showed the birds orient specifically to the tangerine scent. There has also been some suggestion by other researchers that the scent may function to reduce ectoparasite burden. 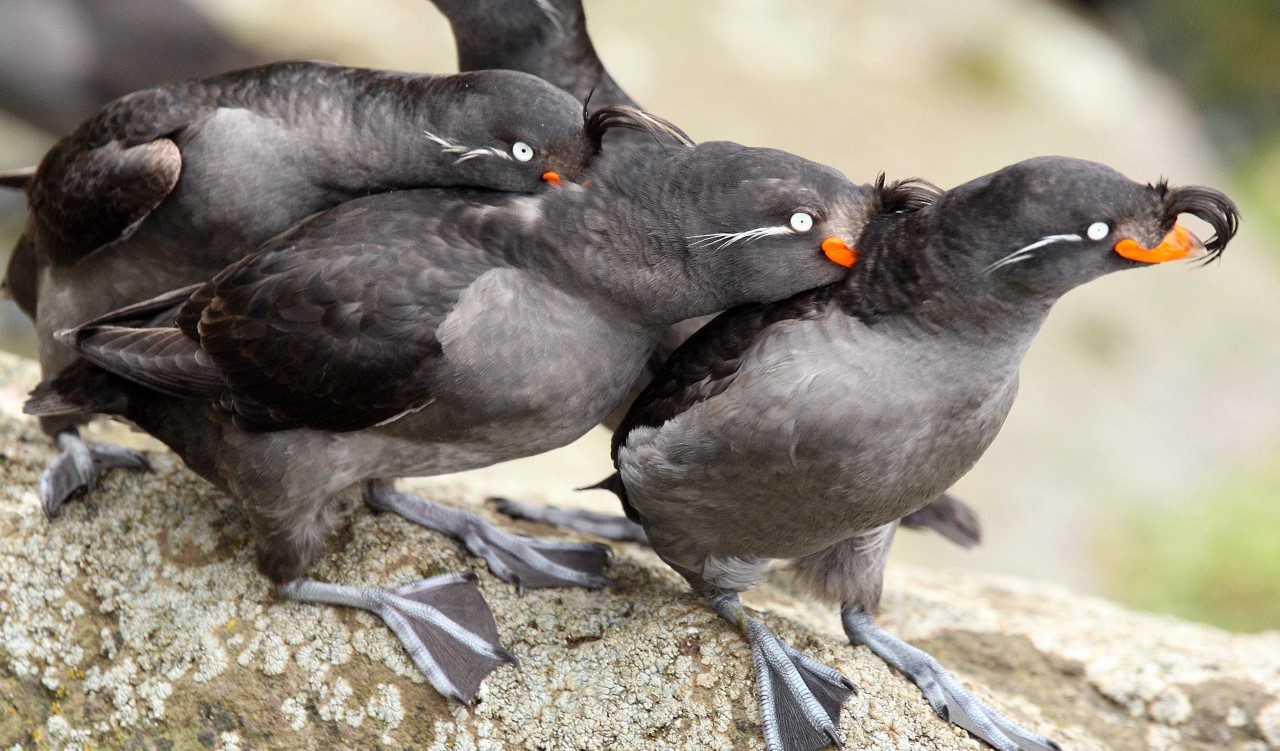 Below: The third species of auklet we saw was the adorable Least Auklet, the smallest of the auks. They are tiny, the same size as an American Robin (80 grams or 3 ounces). These guys mostly nest below the cliffs deep down in the boulders or in boulder fields away from the cliffs. They gather in large numbers and socialize on the tops of the rocks. 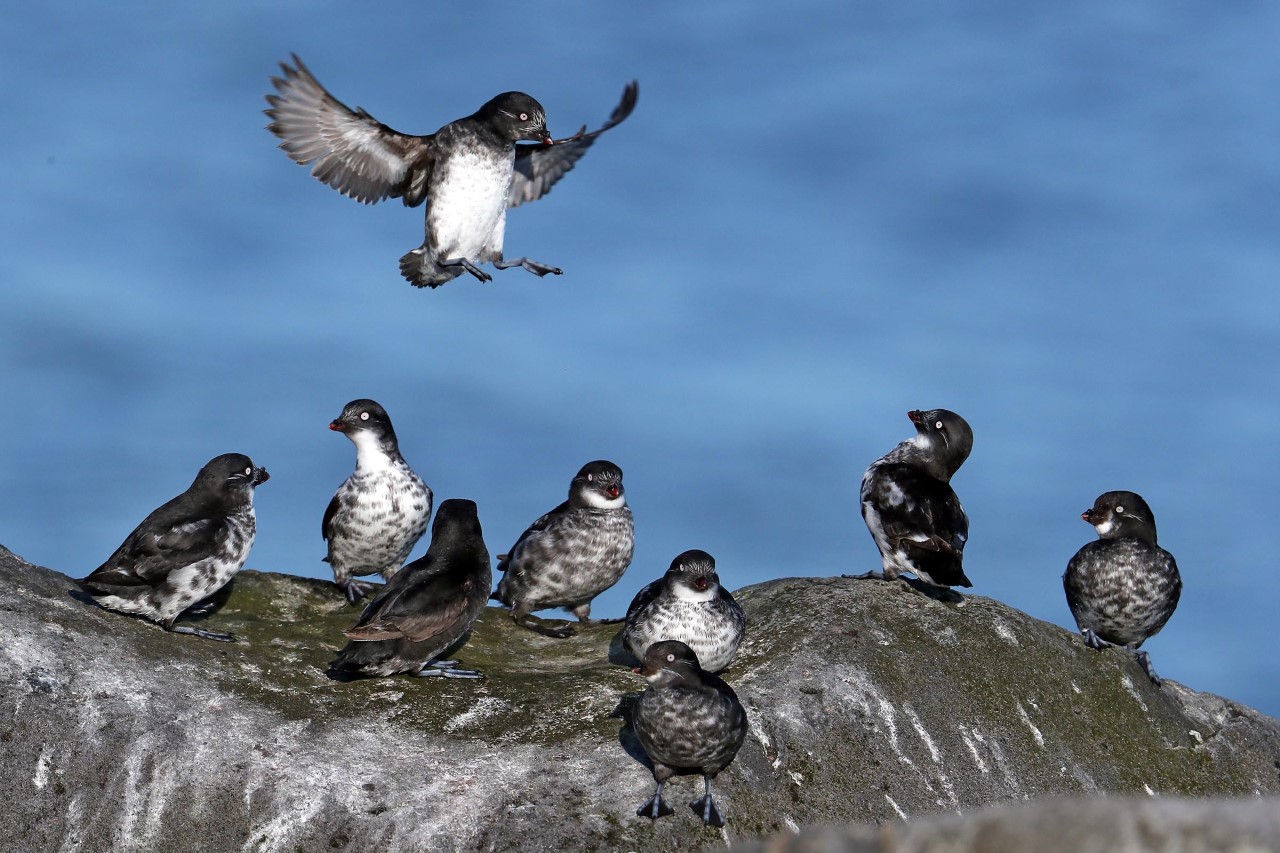 Below: Video I took of auklets hanging out on the tops of boulders.

Below. Another group of Least Auklets socializing on the rocks. Note the plumage variation among birds: one bird is almost pure white in the front, many have speckled plumage and a couple of birds are very dark. In a study at St Paul Island, Jones and Montgomerie found that the birds mate assortatively by plumage color, meaning that dark individuals pair with other dark individuals while pale birds pair with pale birds. In another study, Jones found that plumage color serves as a ‘status signal’— lighter birds appear to be dominant over darker birds. The birds also get lighter with age, so perhaps dominance is related to age as well. 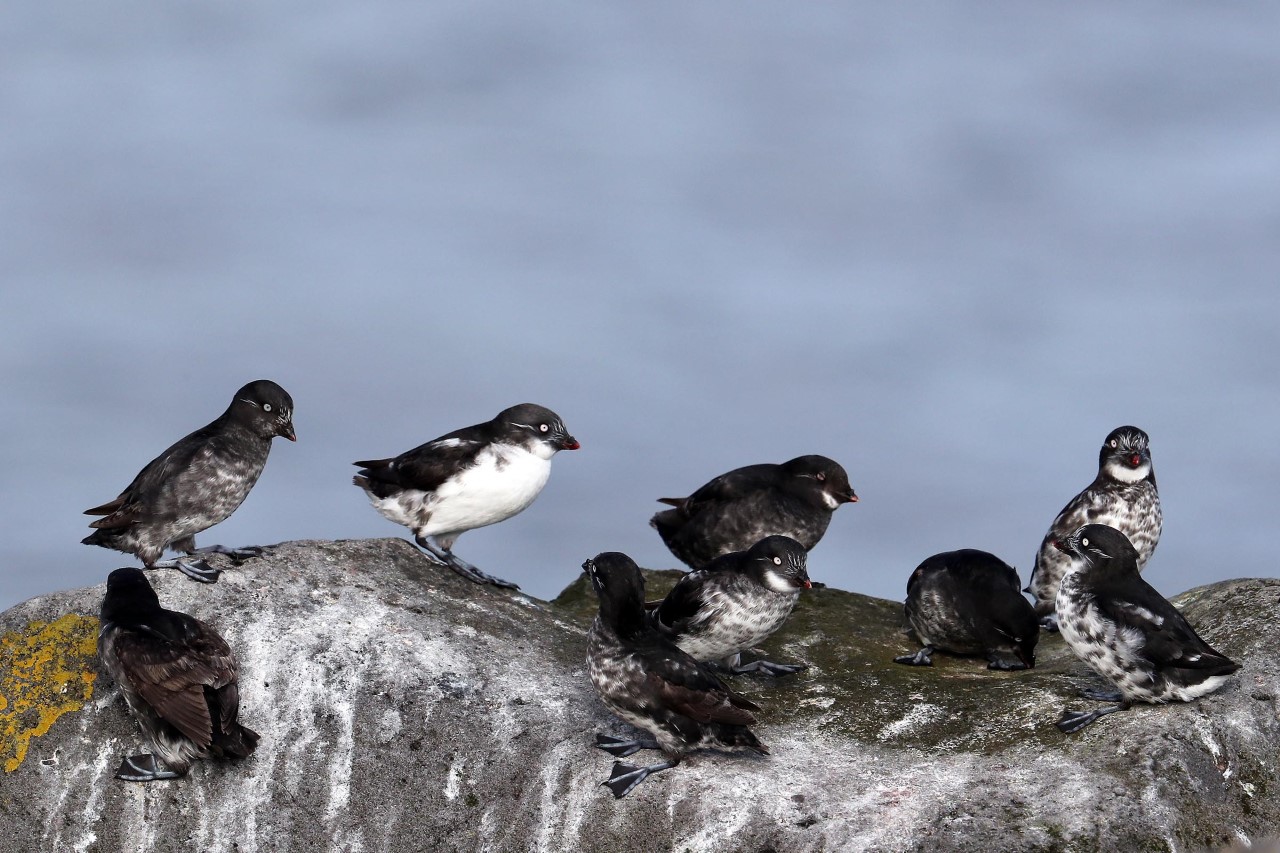 Below: Least Auklet in flight. 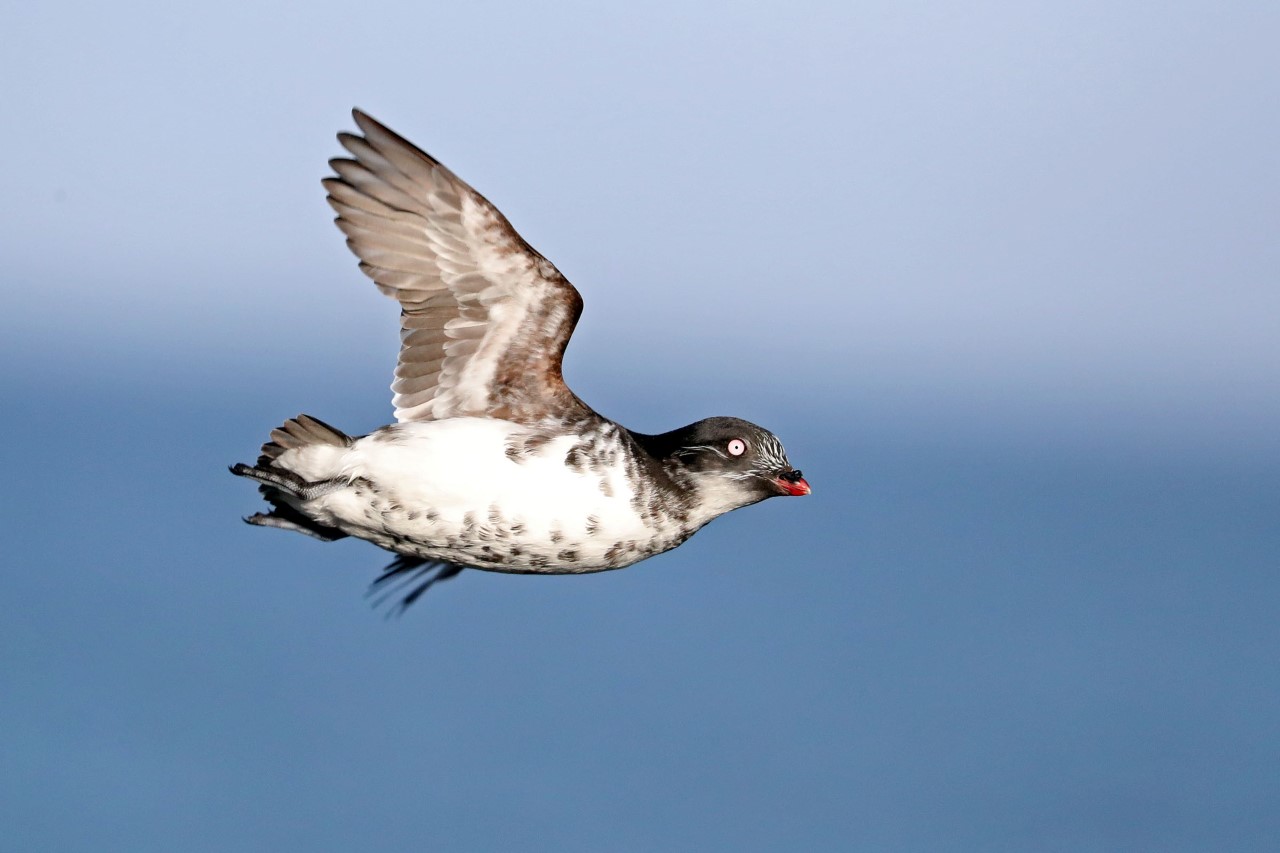