It’s the first Monday of the month: August 5, 2019, and National Oyster Day. Sadly, this is not a day to celebrate oysters, but to eat them alive:

It’s also Work Like a Dog Day (“Work Like a Cat Day” for those of you who aren’t inspired), but yes, I’m working all day. (Why am I doing this? I’m retired!)  Finally, it’s International Traffic Light Day, because “On August 5, 1914, what is considered to be the first electric traffic light was installed in Cleveland, Ohio, at the corner of East 105th Street and Euclid Avenue. It had four pairs of red and green lights, one for each side of the intersection, and a warning buzzer that indicated when the light was about to change. It had to be operated manually by someone in a nearby booth.”

Stuff that happened on August 5 include:

“Executed” is an understatement. First they dragged him a long distance behind a horse, then hung him, but not until he was dead. They then dropped him from the noose, laid him out, cut off his genitals, and then cut out his intestines and showed them to him (you’d think he’d be dead by this point). Then they chopped off his head.  People were very cruel in those days!

Here’s the famous death scene of Wallace from the movie “Braveheart”; fortunately, they don’t show what’s going on below the neck:

Zenger was in prison eight months awaiting a trial that lasted ten minutes. The jury acquitted him, and Zenger, then and now, became a symbol of a free press. The principle was that a statement, however damaging, is not libel if it’s true.

Here’s Marilyn Monroe (real name: Norma Jean Mortenson) at age 15. There were of course conspiracy theories about her death, the most persistent being that she was killed by the Kennedys (she apparently had affairs with both JFK and RFK) to hide their dalliance. 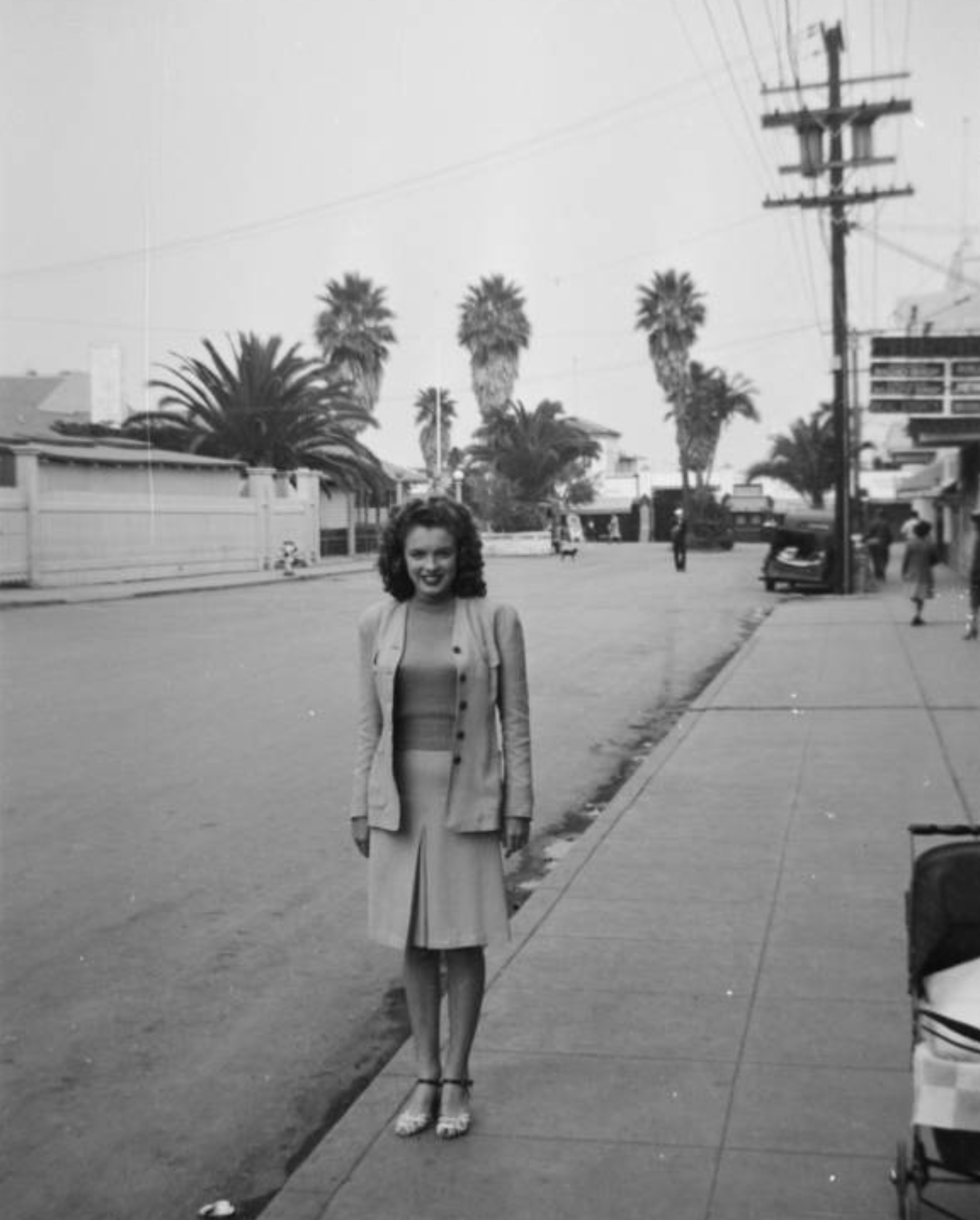 Notable born on this day include:

Those who passed away on August 5 include:

Meanwhile in Dobrzyn, Andrzej and HIli are playing a game: (Andrzej is holding a “cat sausage” much beloved by Hili):

Hili: Is the thing you have in your hand for me?
A: I give you three guesses. 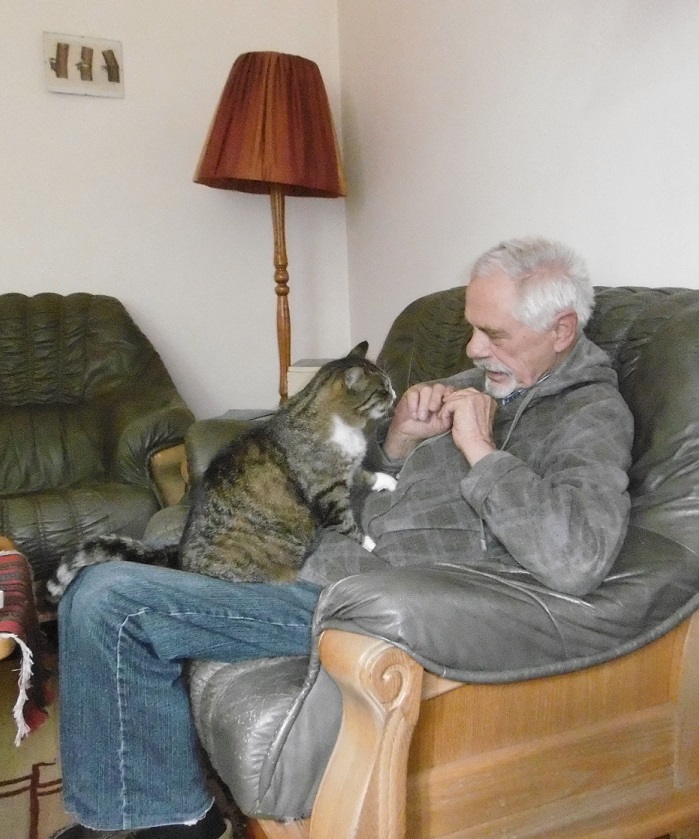 A gif from Gfycat. What a nice man, but where did he get tiny traffic cones?

From Fat Cat Art, we have a real deity receiving its due in a vet hospital: 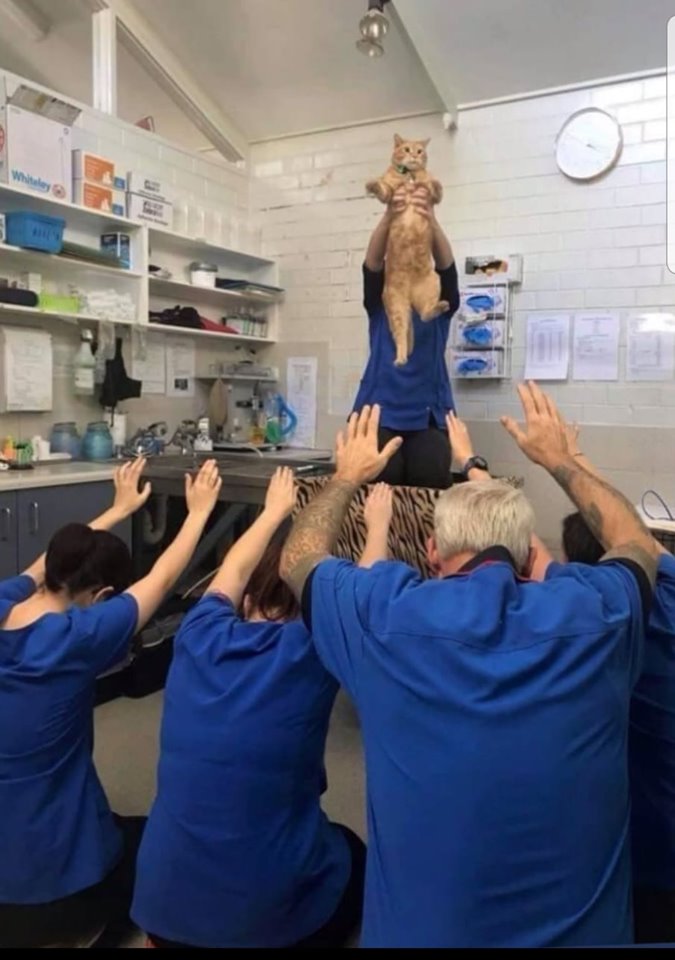 A tweet that Grania sent me on January 8 of this year. The good news is that I found an old email that she sent with lots of tweets, so we’ll be able to remember her contributions for even longer.

The bark is worse than the bite … but the bite hurts too pic.twitter.com/52nvzq0AU1

A tweet sent by Gethyn. Three primates wash a d*g and then themselves:

There hasn’t been a more important video to cross my TL in quite some time pic.twitter.com/o467GgxUcz

A hypno Bengal from reader BJ:

After the death of Frank the Kitten, we need a cat story with a happy ending. This is one, sent by Heather Hastie:

Watch this guy very patiently transform a feral kitten into a cuddly cat 😻 Thank you for sharing @flatbushcats pic.twitter.com/3slszE1vmo

Three tweets from Matthew Cobb. Matthew, like me, has had enough gun murder in the U.S. The piece of art he shows us makes that point eloquently; it must have taken a lot of work to intall:

It took exactly one unnecessary lawn-dart death to get them banned. How many gun deaths will it take to get some gun regulation in place? Or is it because lawn darts are needed for a “well regulated militia” LOL

In 1987, the federal government banned metal-tipped lawn darts because a single child died from one

Cloud-mountain dynamics are so cool to watch. This on Pikes Peak in Colorado.