I am WAY behind in duck reports due to the press of other stuff, so these photos and a video were taken on July 25. But I have more recent photos still in the camera. All will be revealed.

All the ducks are well, and all are lively and eating vigorously: I’ve never seen ducks eat like Daphne’s brood (now fully feathered) did today. Below is one of her ducklings only 10 days ago, still sporting duckling down as it looks for food ashore. Today (August 4) there is no more down—only feathers and tiny wings.

Katie is still here, with her primary feathers growing back in after her molt. One of her brood remains. Anna is starting to molt since her brood of eight has started to fly, though only short hops. And Daphne and her nine are omnipresent, coming up on land to beg for food at my feet. In other words, we have 21 mallards in the pond. I’m going through duck food like there’s no tomorrow.

Note that this foraging specimen of Daphne’s kids, which to me looks like a tiny dinosaur, puts its head down and charges when it sees an insect (0:23 and 0:44). It missed both times, but it’s cute. And by all means do not miss the flapping of tiny wing-stubs at the end!

This is a dinosaur! 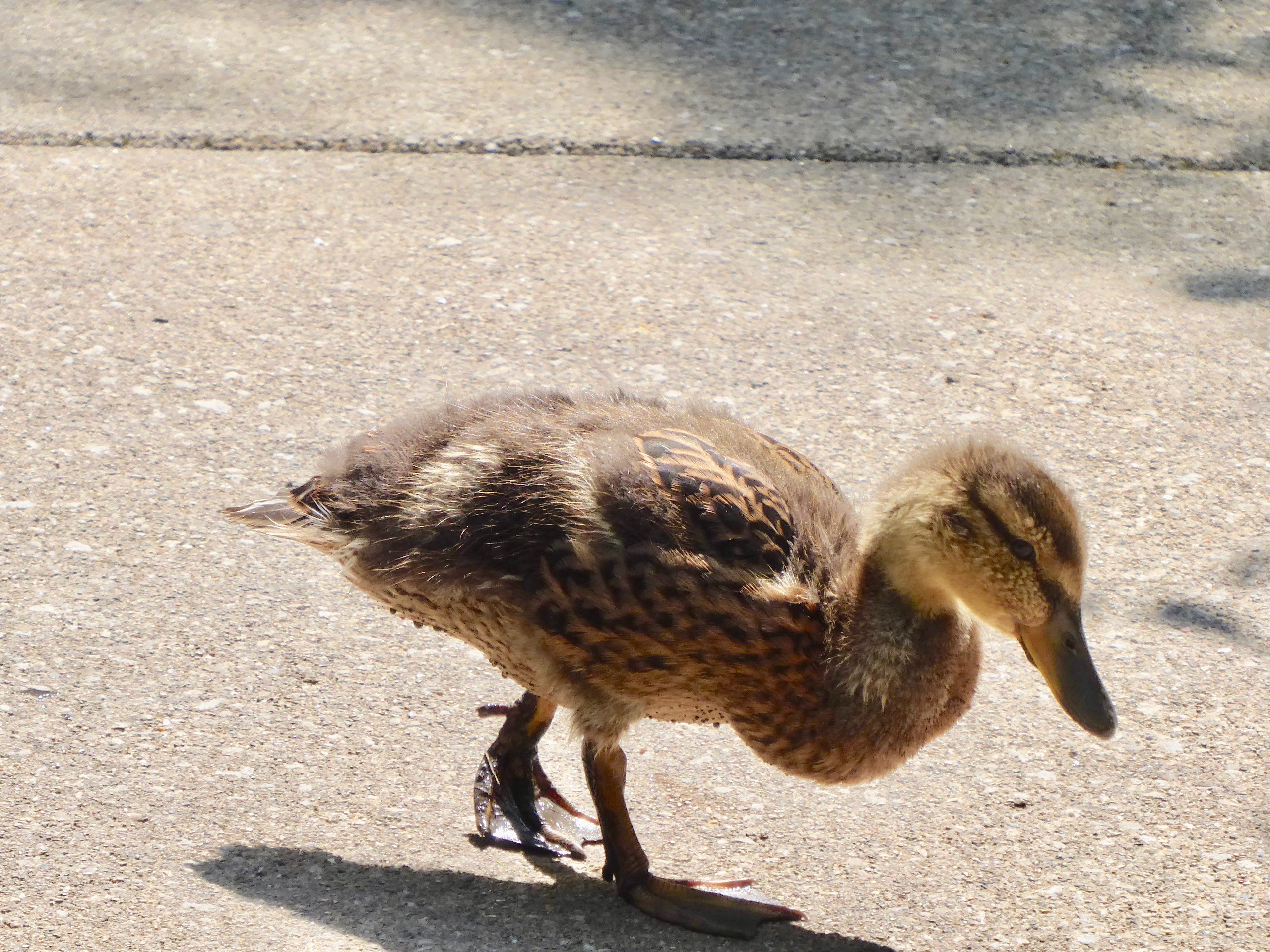 As of today, all the down is gone; they now look like miniature ducks. Note the feather “cape”, as the feathers grow backwards from the neck and down onto the breast, but also forward from the tail. 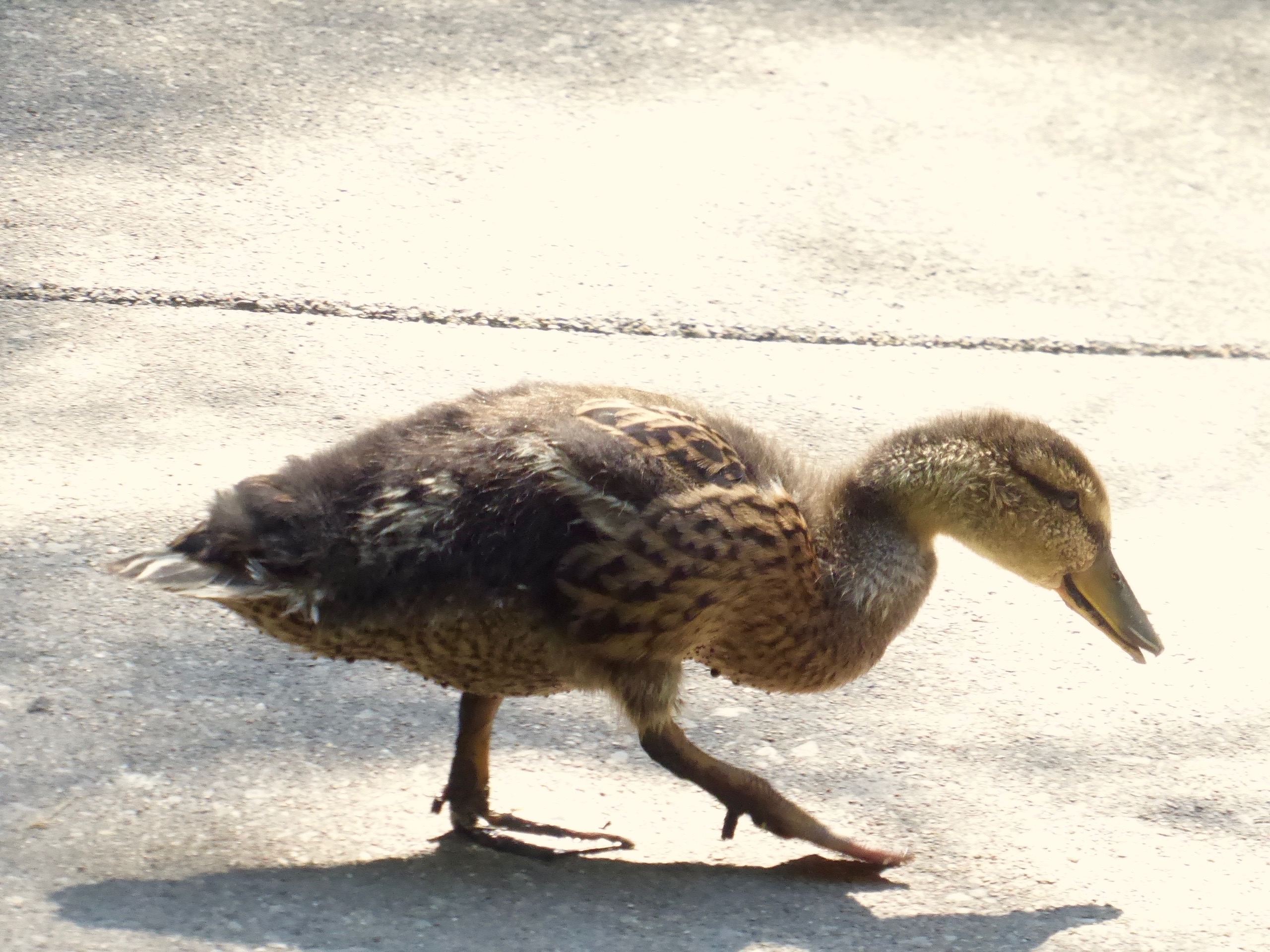 Those feathery bits of the cape are actually its tiny wings: 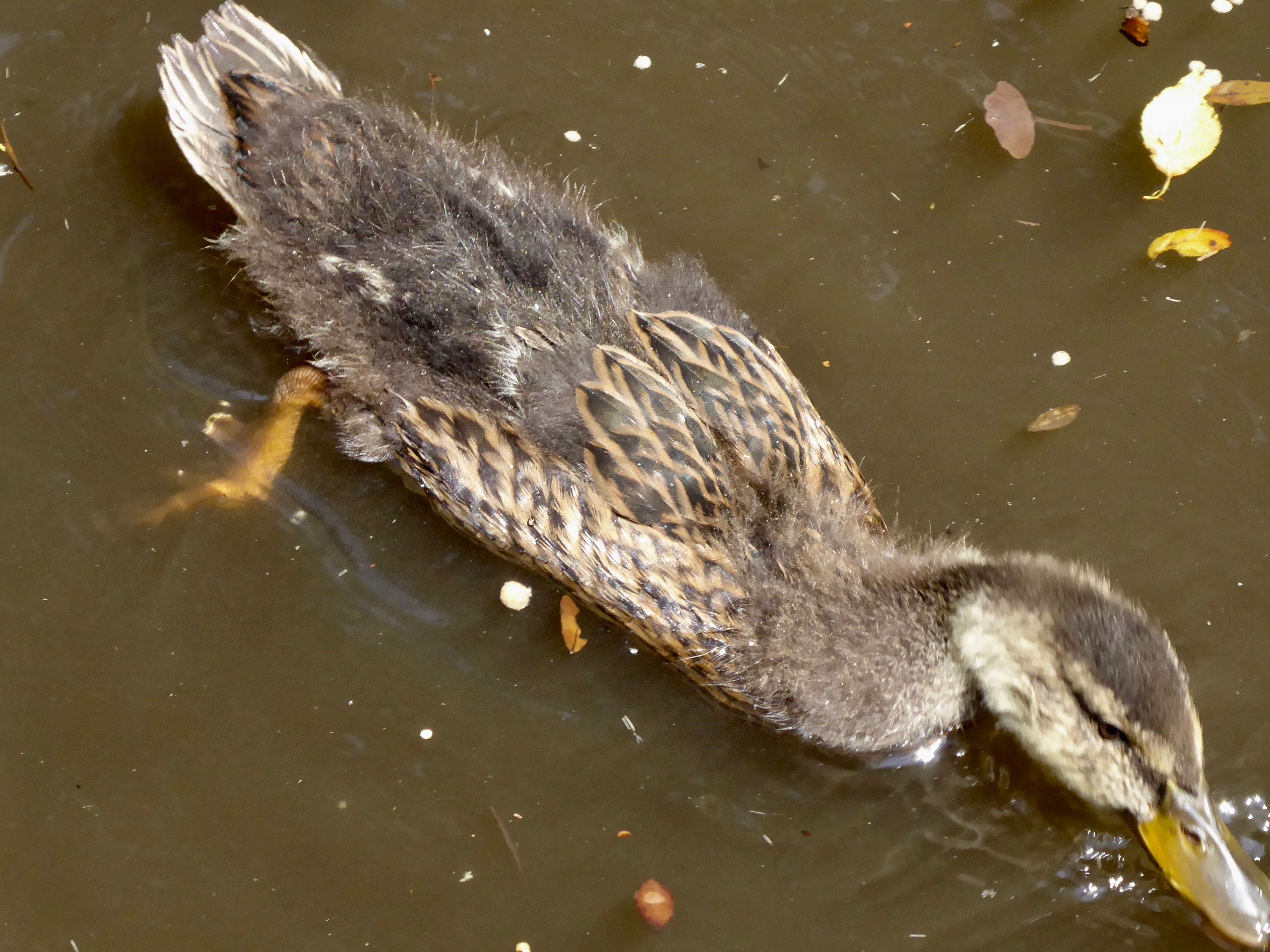 Eight of the nine importuning me for food. Daphne is top left. 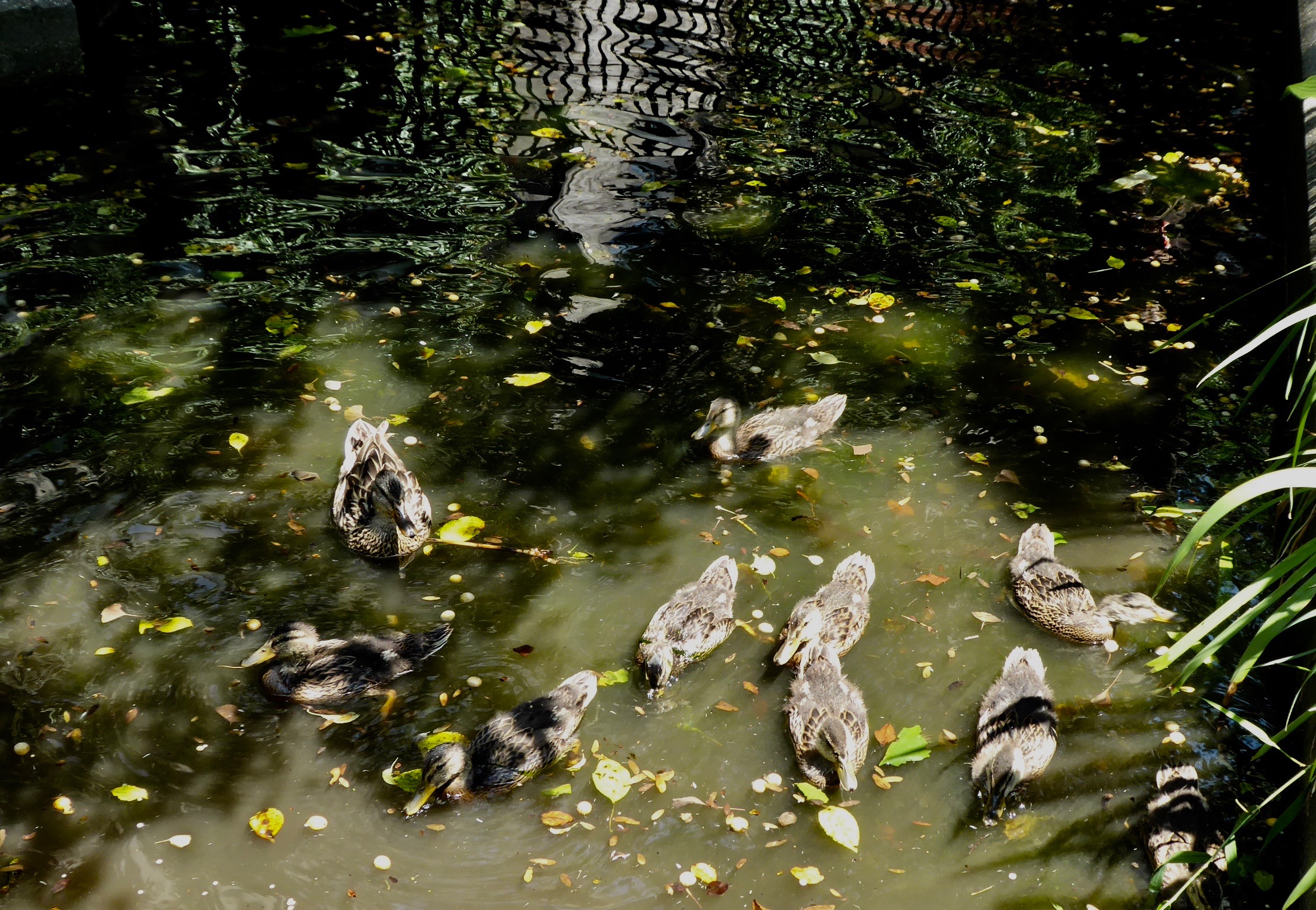 Daphne guarding the brood, with turtles around. The turtles and ducks don’t interact, though occasionally a duck will nibble some algae off the back of a turtle. I like to think of this as a mutualism, as the ducks get a snack and the turtles get streamlined. 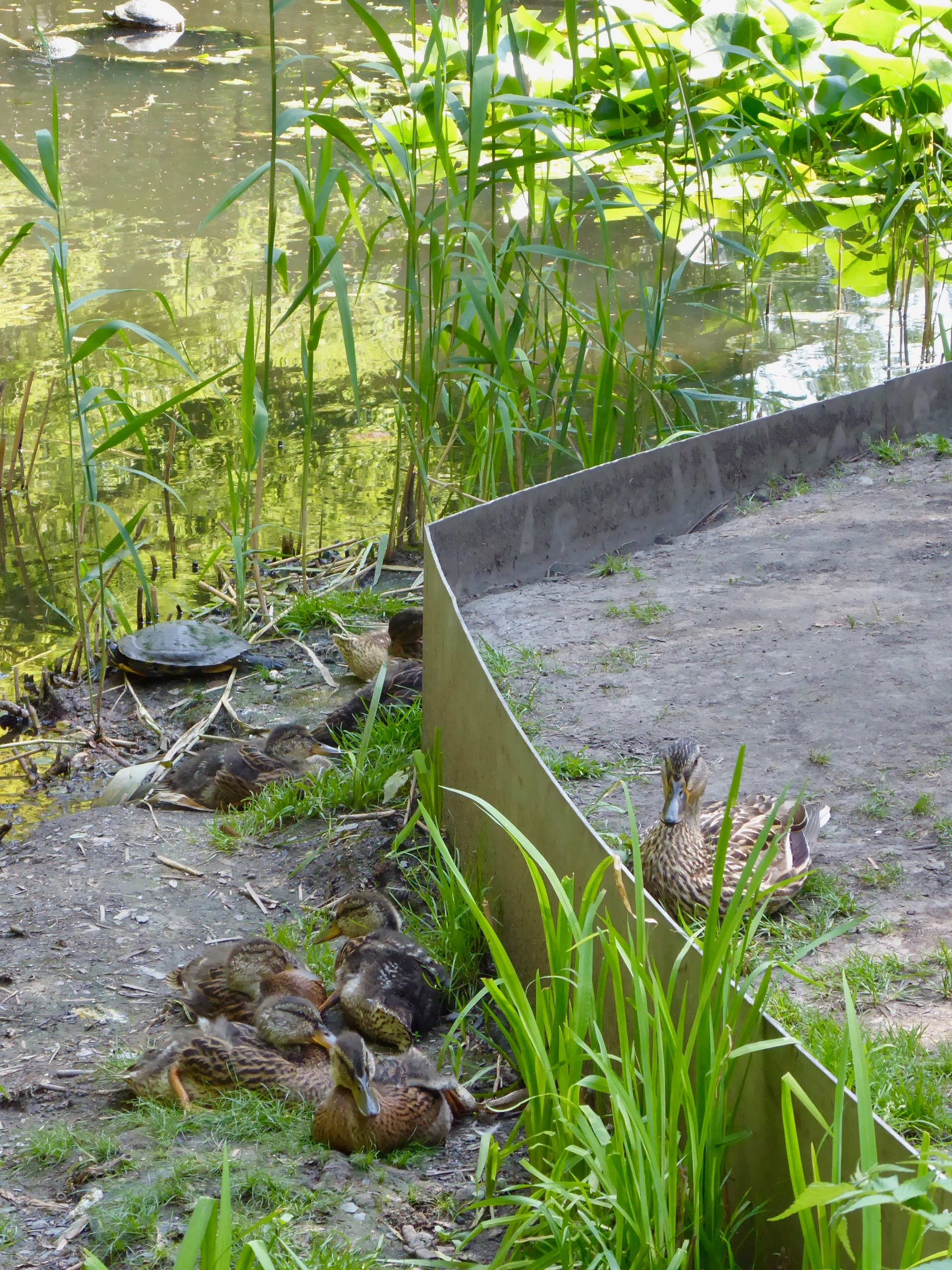 And the lovely Daphne. Check out that blue and purple speculum: 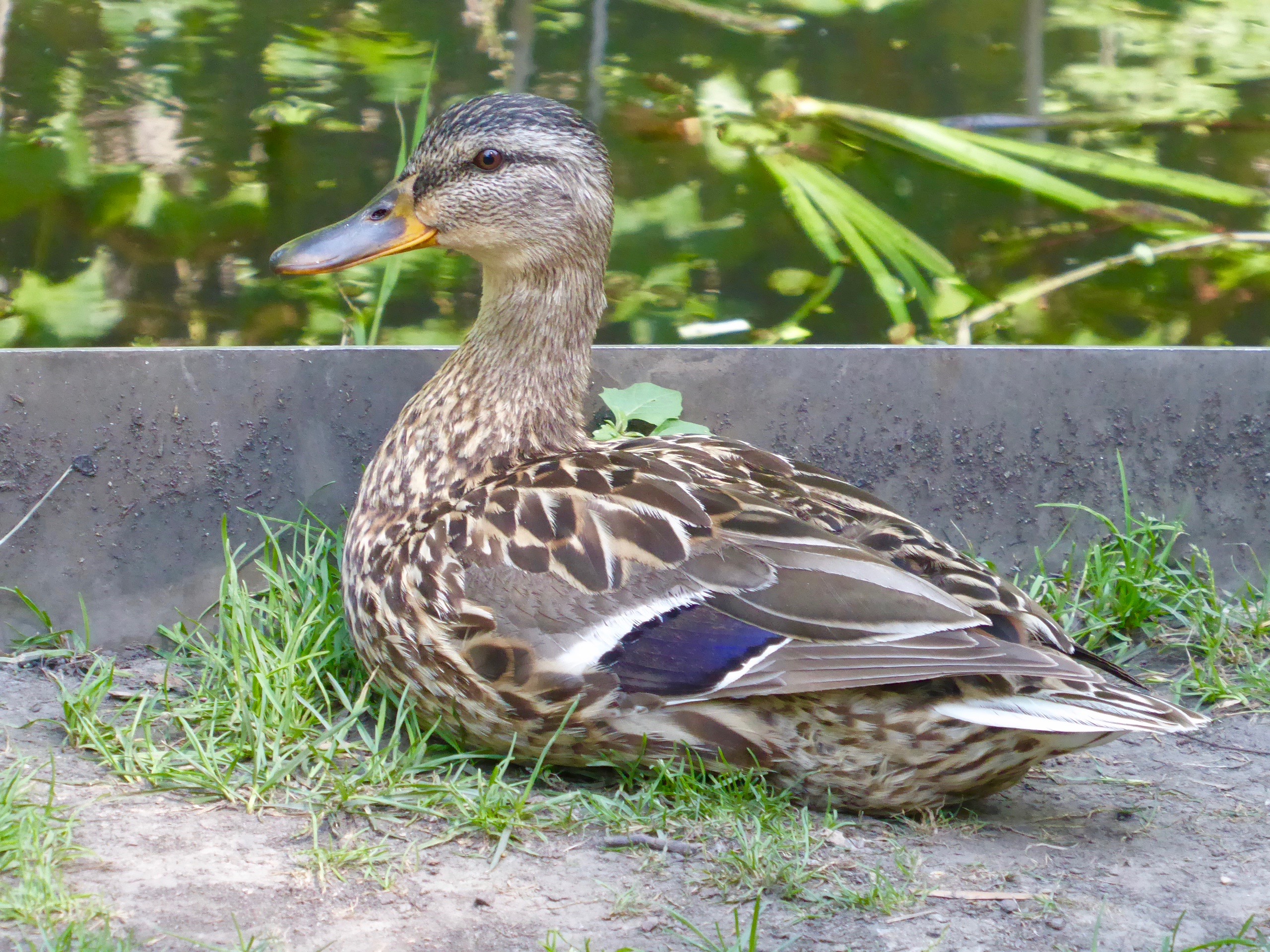 One of Anna’s—the middle brood—resting on the bank. Note that its wing feathers are almost grown in, and the eye is open. 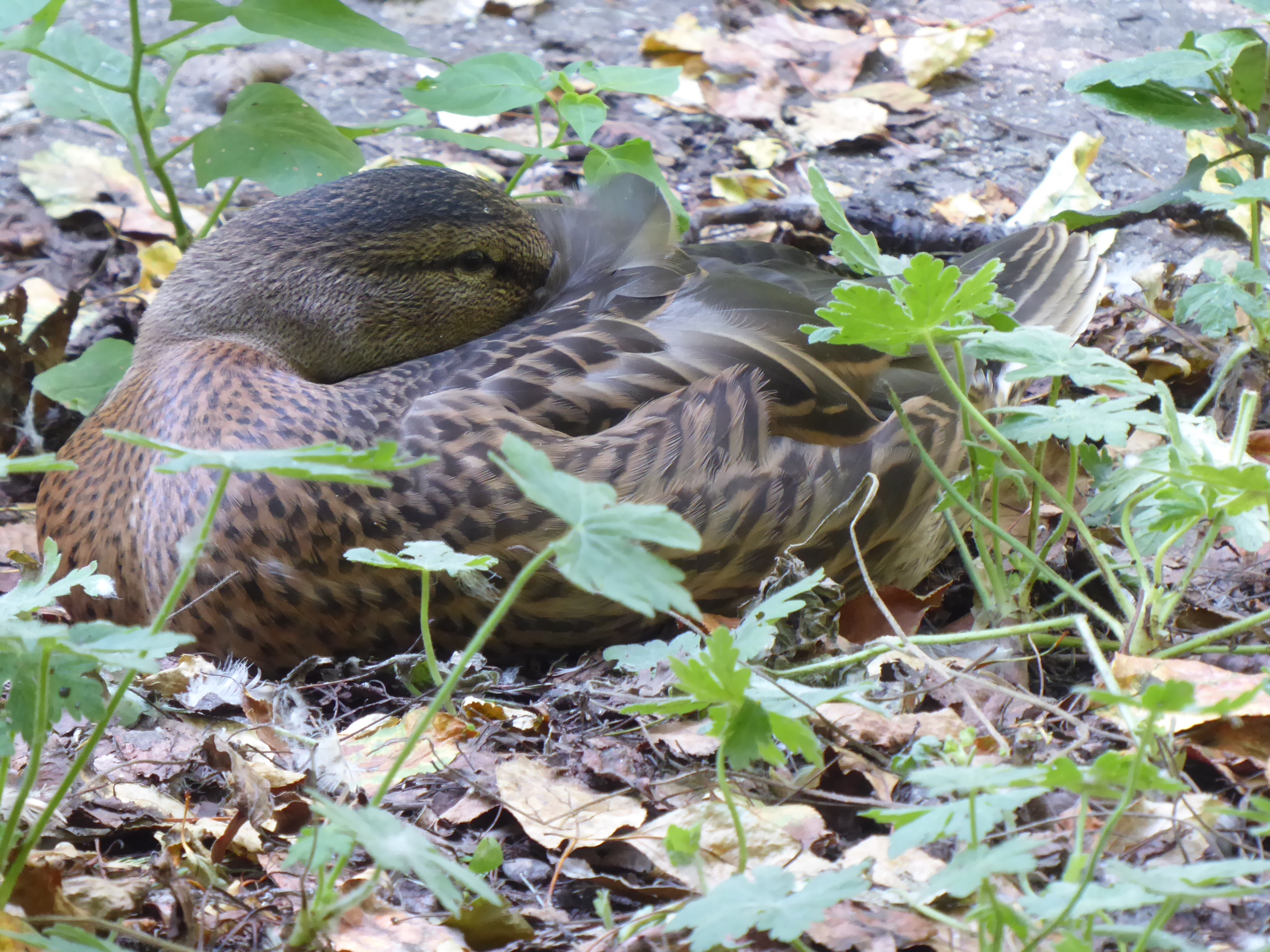 Eye closed with the nictitating membrane: 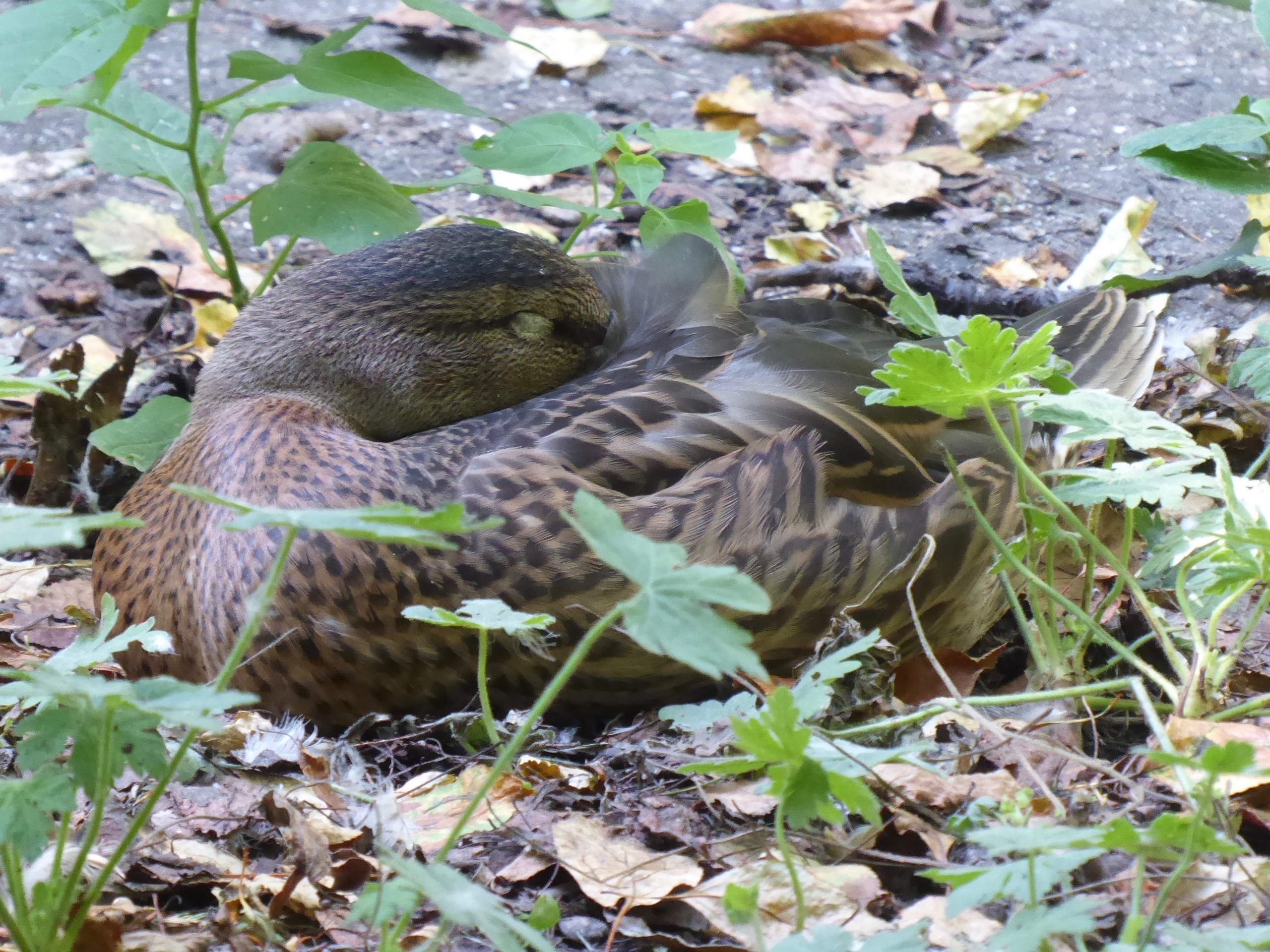 Another one of Anna’s kids. It looks like a freshly-minted duck, all clean and feathery. The primary feathers on the wing are long, but don’t yet cross. At this stage they weren’t able to fly, but they were able to by August 1. 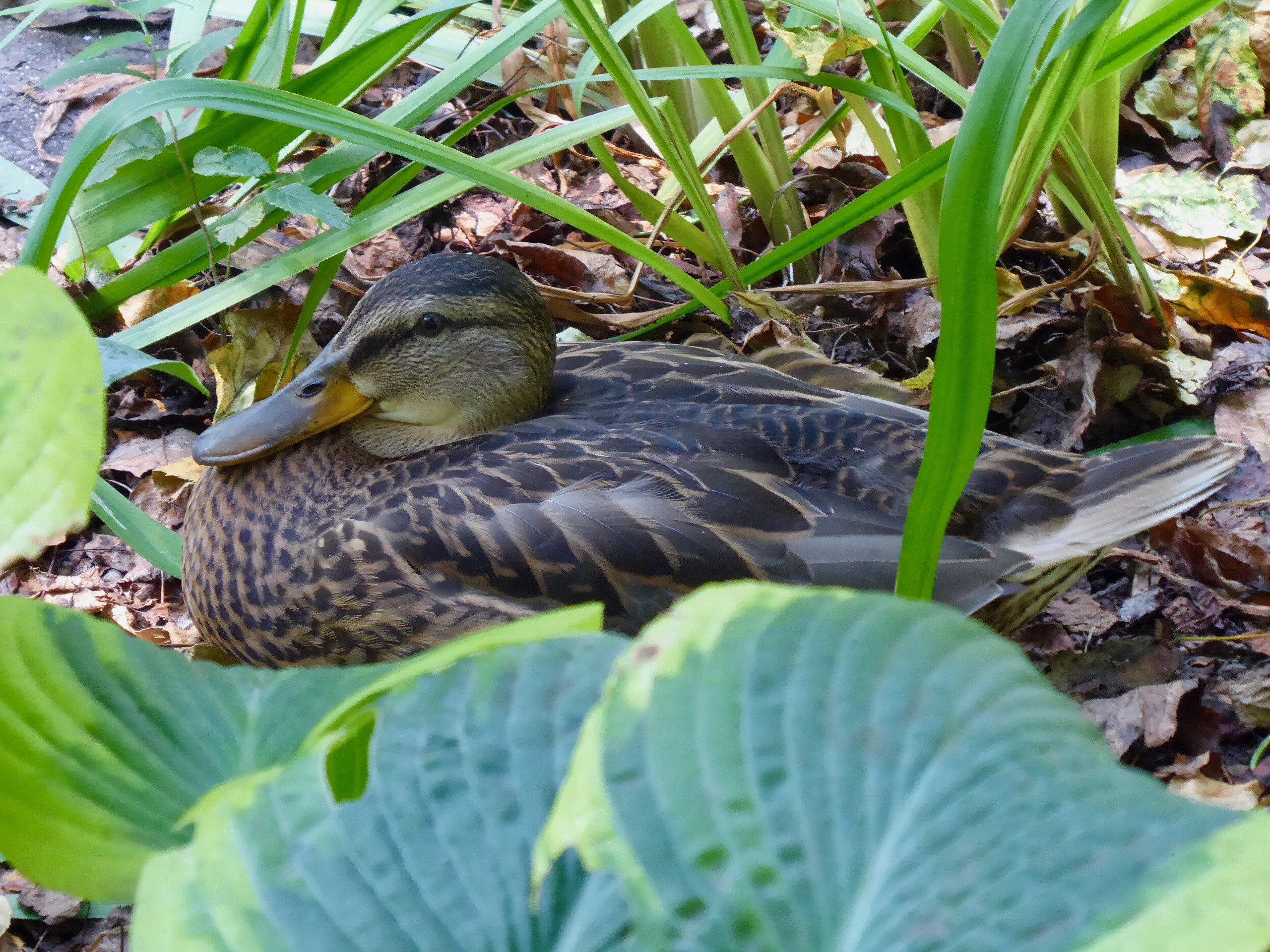 Mallards are cryptic when resting on the leaves. There are at least five ducks in this photograph, though you can’t see them all (I counted them before I took the photo). Note how their feathers match the sun-dappled leaves. 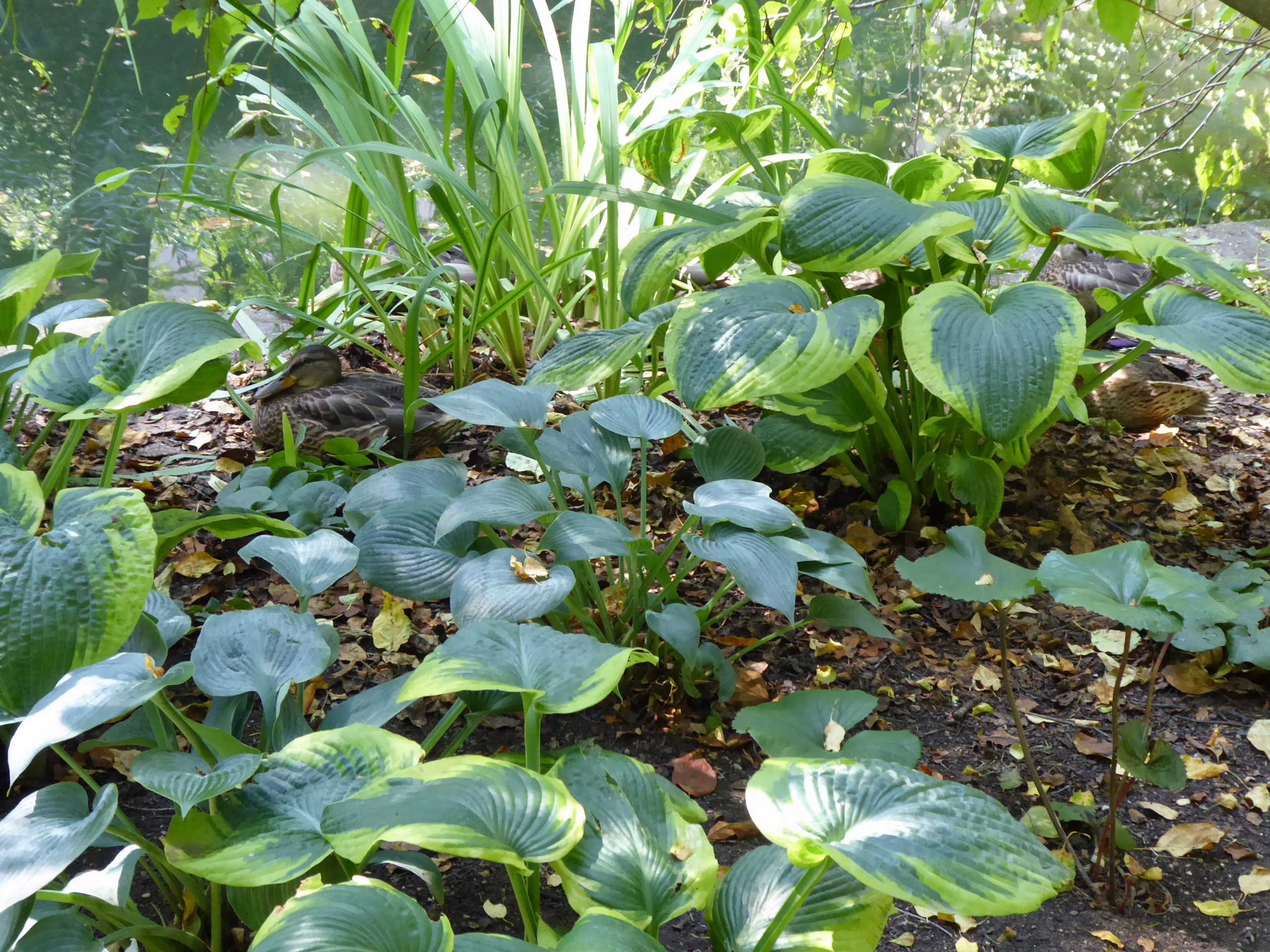 Yes, I know I’m no Bruce Lyon, but these are my waterfowl, which are mine.