Here is another installment of photographs from my recent trip to St. Paul Island, Alaska. Among the 11 breeding species of seabirds, two species always seemed to grab my attention—the two puffins. No matter what I was watching, if a puffin flew by or landed on on the cliffs, my eyes were drawn to them—they are such beguiling birds. The two species breed on St Paul Island: Horned Puffins (Fratercula corniculata) and Tufted Puffins (Fratercula cirrhata). Puffins are auks (family Alcidae), relatives of murres (guillemots for Europeans), the extinct great auk, murrelets and auklets. The auks are all wing-propelled swimmers—they swim under water by flapping their wings, hunting for fish or invertebrates. Other waterbirds, like ducks, grebes and loons, use their feet for propulsion under water.

Below: Puffins are simply stunning in the breeding season—Tufted Puffins have striking bill coloration, a conspicuous red eye ring and lovely golden head plumes that extend well behind the eyes and down the neck. Typically, the puffins perched well down the cliffs by their nest cavities, but a few times I came across birds sitting quietly at the top of the cliff, which enabled me to get some nice photos. 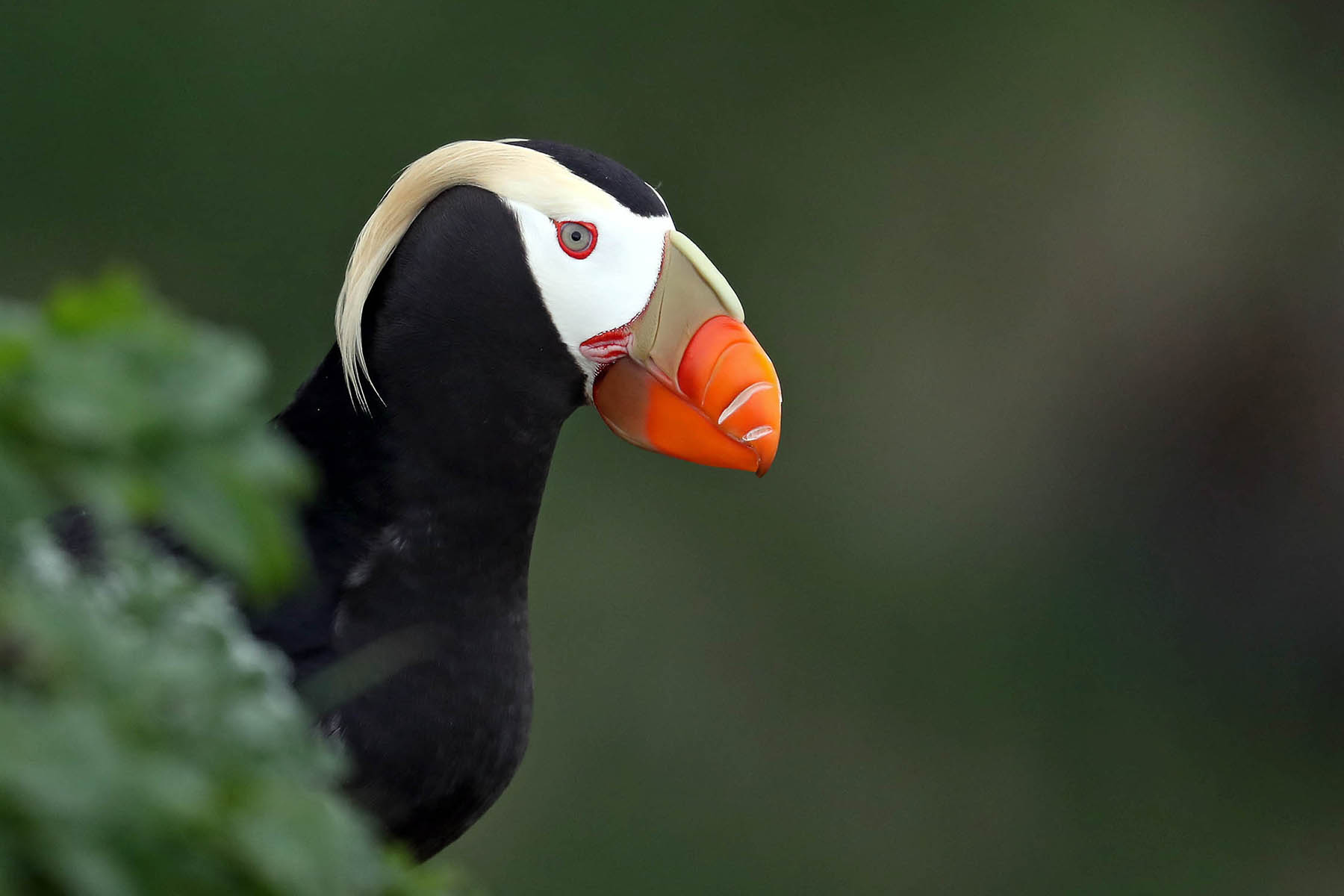 Below: Same bird face on. And what a face! 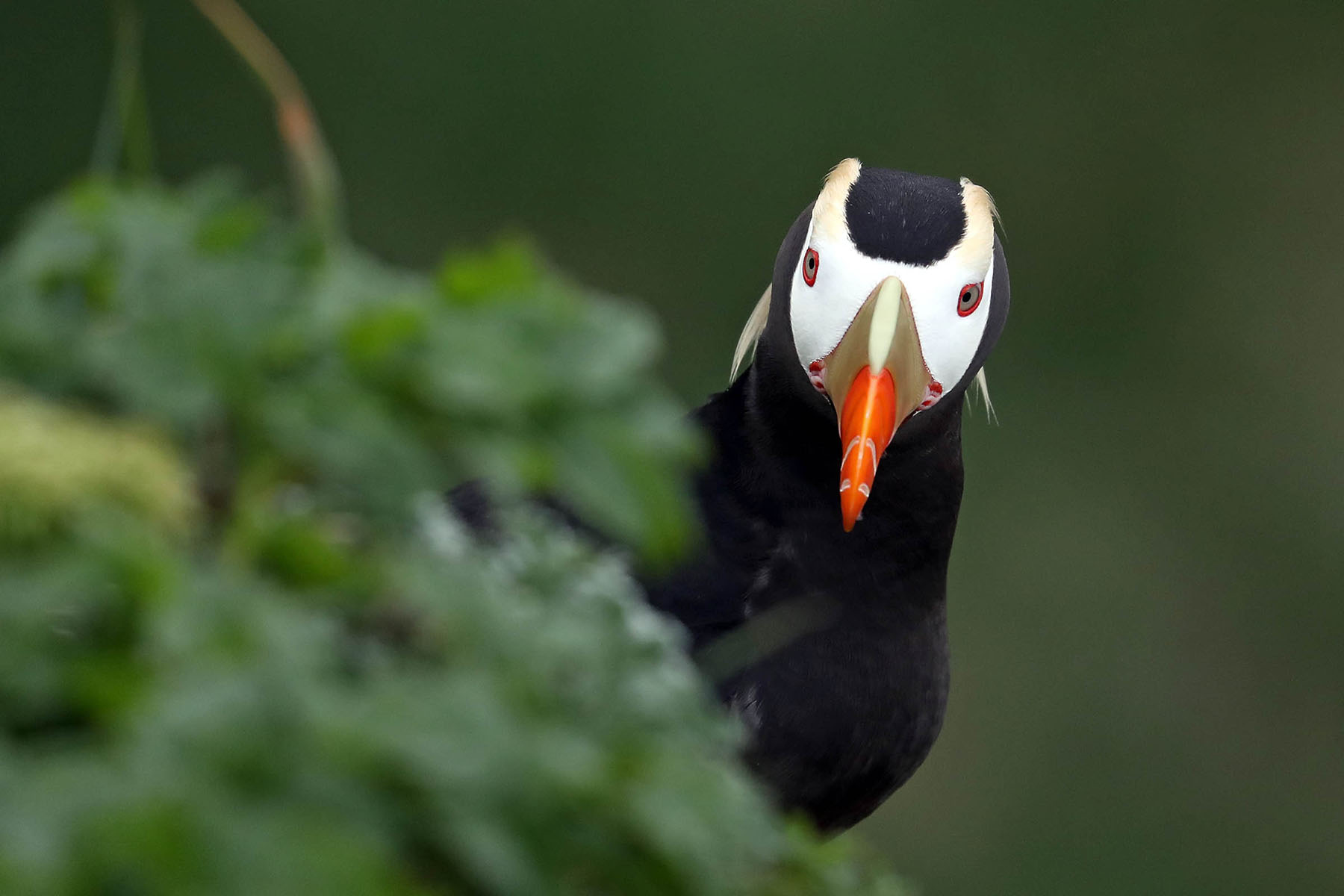 Below: Same bird from a different angle. 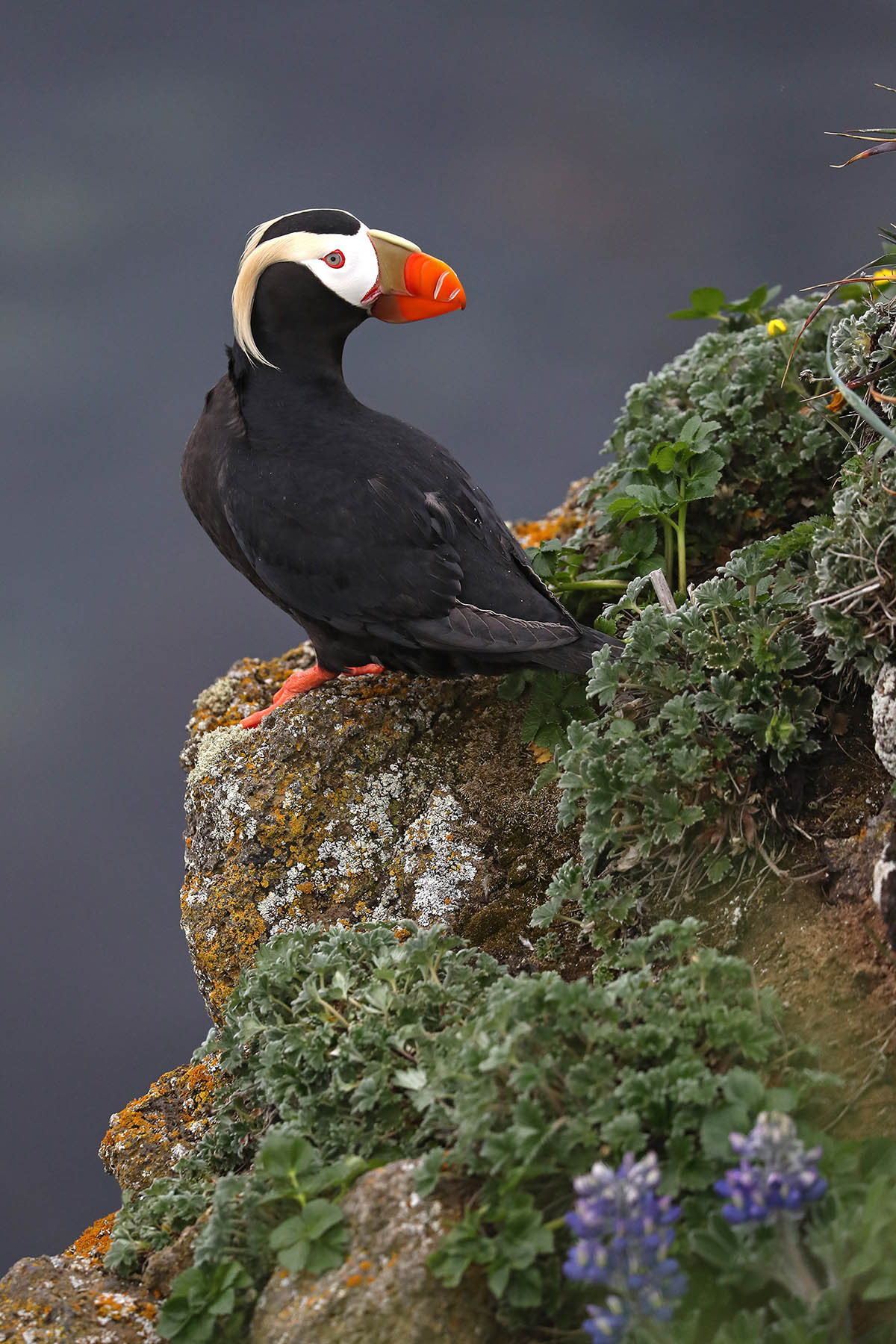 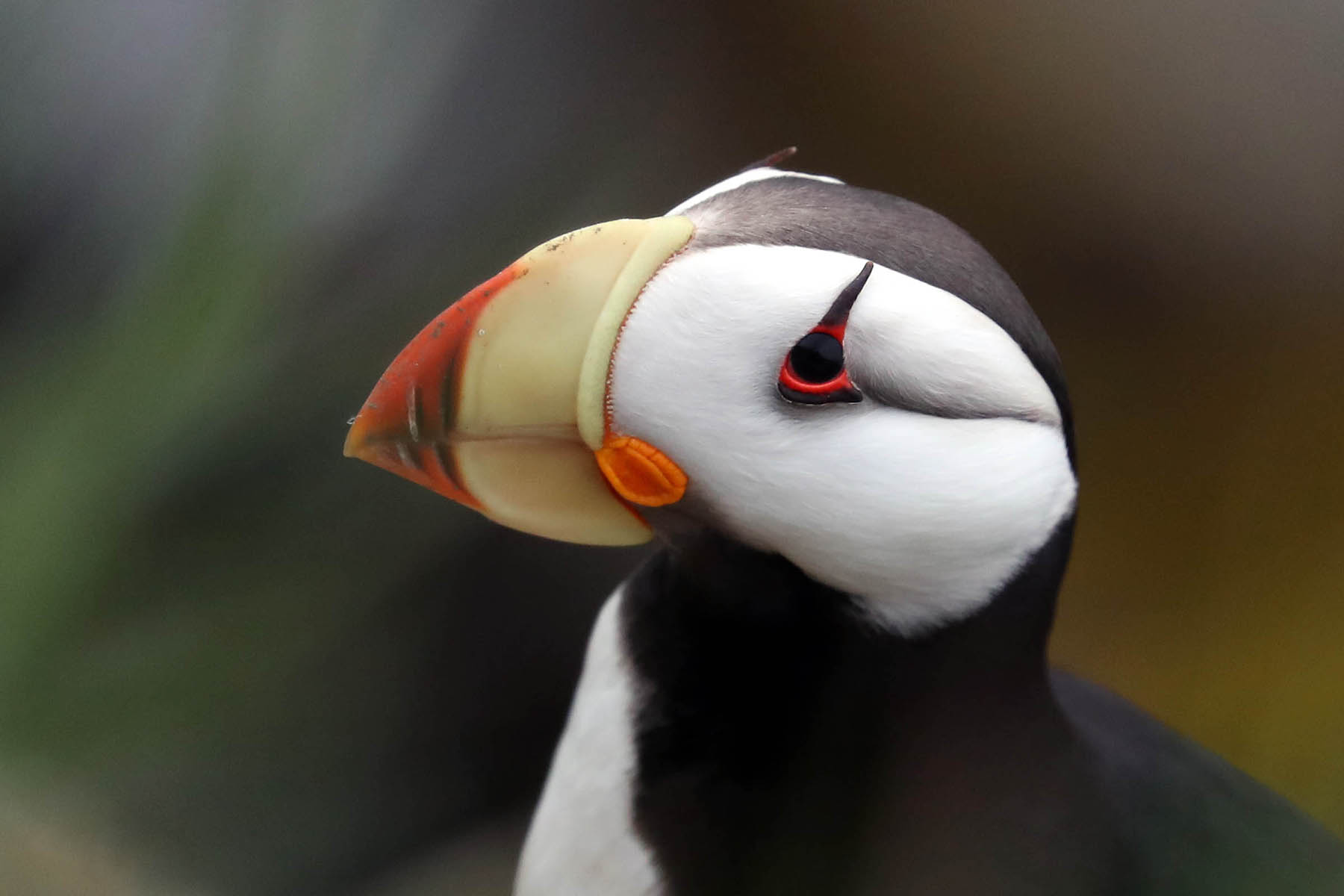 In auks generally, the striking coloration occurs in both sexes and only in the breeding season. In winter, both sexes have drabber plumage and beak colors. Below is a photo of both species in winter, taken by someone at the Monterey Bay Aquarium in California, which has captive Tufted (left) and Horned (right) Puffins that go through their annual cycle in captivity. Many seabirds have this pattern in which both males and females become colorful for breeding.

One potential explanation for this plumage pattern is Darwin’s idea of mutual sexual selection, an idea that has been supported by some nice studies in another member of the auk family (I will cover this in the next post). Photos below are not mine.

Below: A Tufted Puffin flyby. Auks are clumsy fliers—they have to fly fast to stay aloft because they have small wings for their body size. To stay in the air, birds need to generate lift to overcome gravity. There are two ways to achieve increased lift—flying faster and having a large wing area relative to body mass. Auks have small wings for their body mass so they have to compensate by flying fast. One never sees slowly soaring puffins! Presumably the small wings are useful for efficient underwater swimming so puffins (and other auks) have traded off how they use their wings to move through the water against their ability to fly through the air. 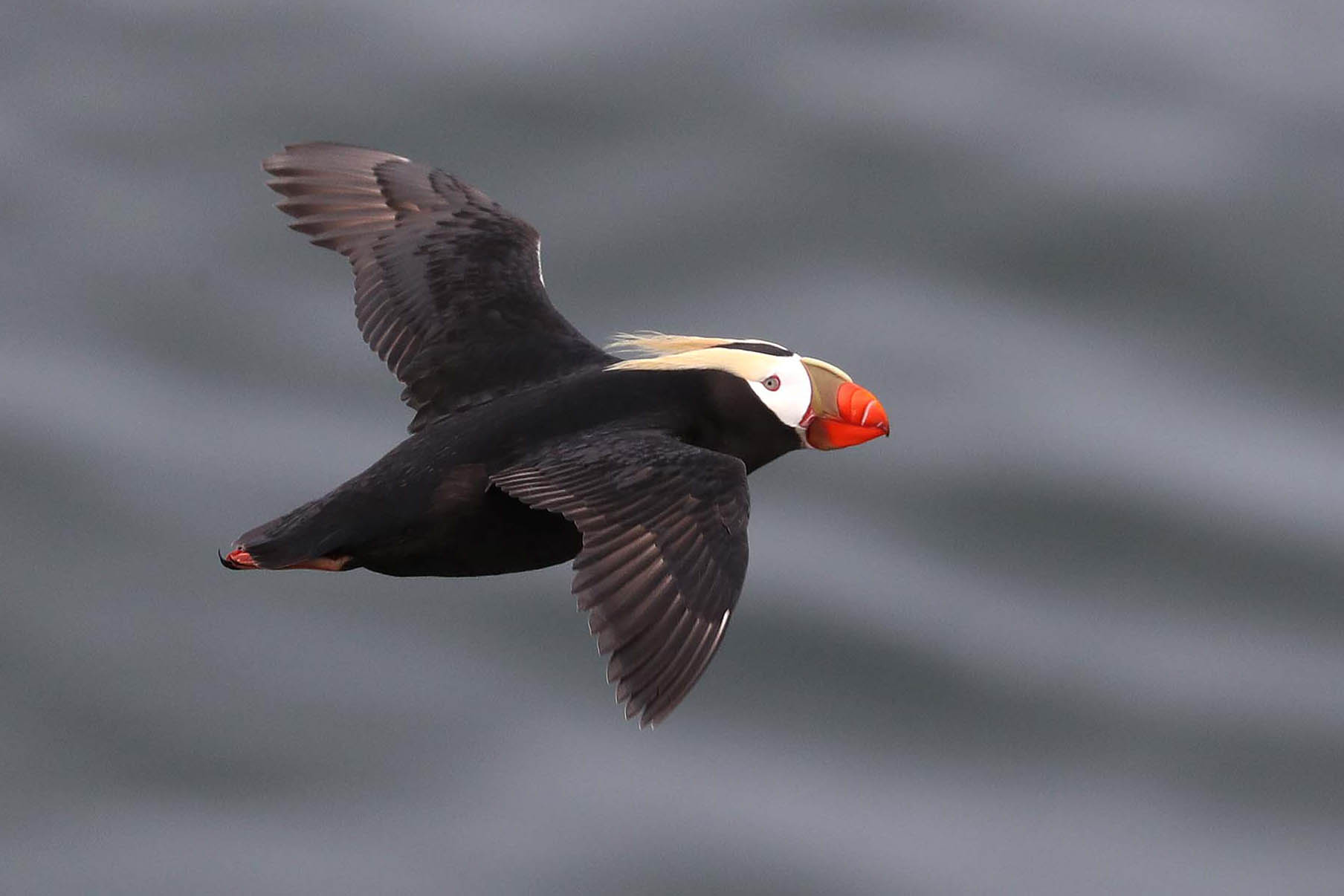 Below: A Horned Puffin in flight. 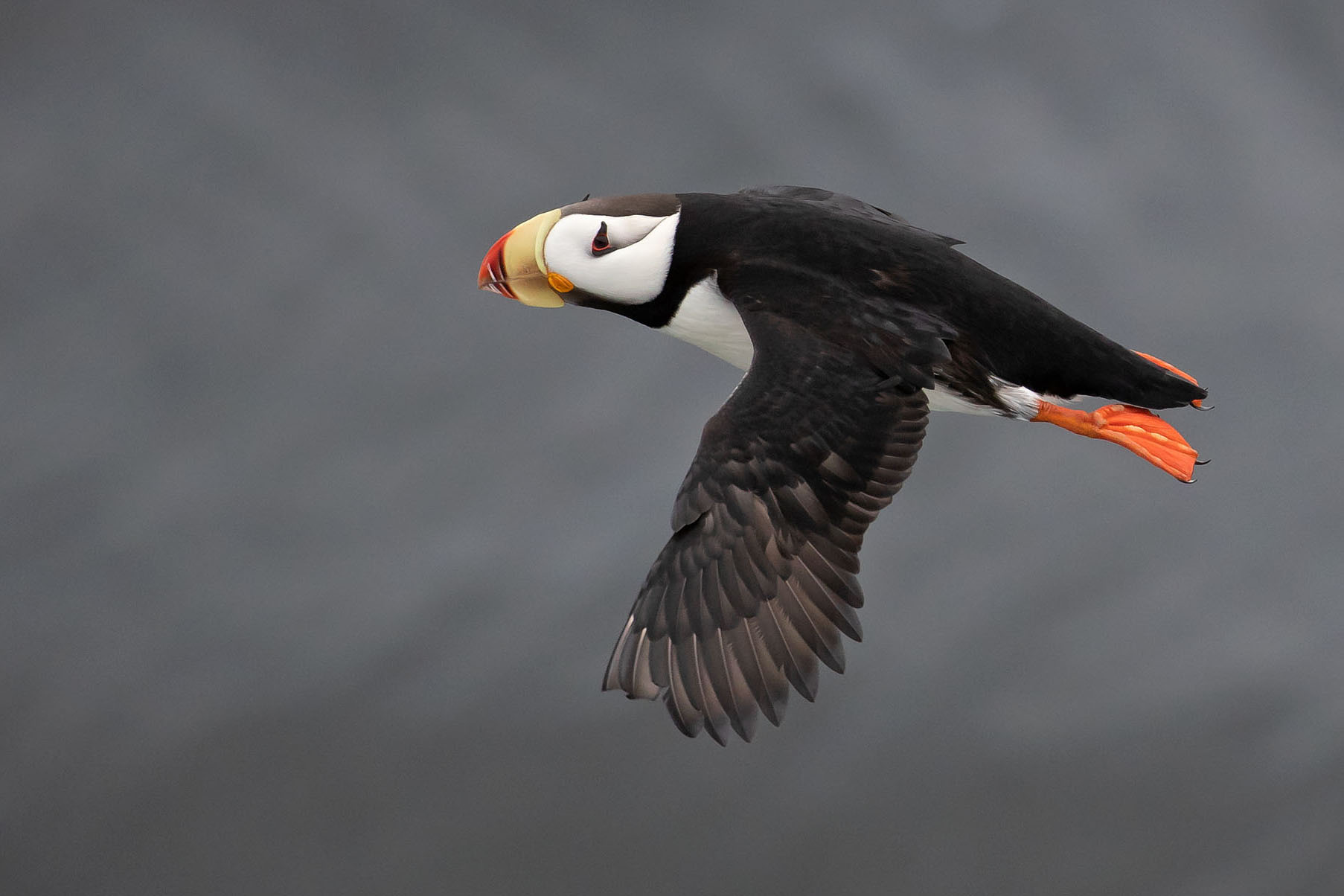 Below: A Horned Puffin thinking about taking flight. It was mostly just stretching its wings but it was a time of day when the puffins were leaving the cliffs to fly out to sea. 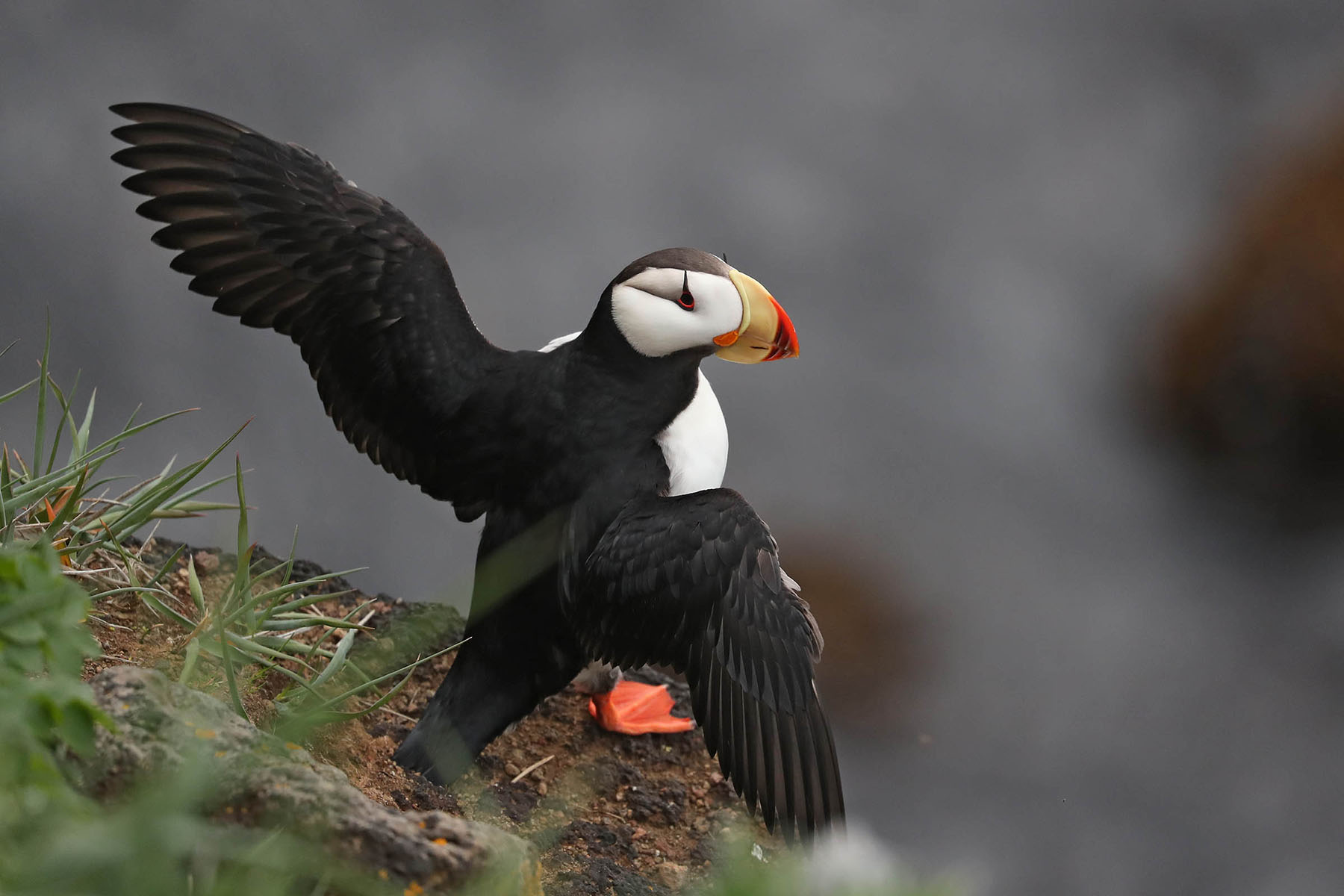 Below: A Tufted Puffin leaves the cliff. Leaving the cliffs is pretty easy because the birds simply drop into a descending glide and quickly pick up speed and build up lift that way. 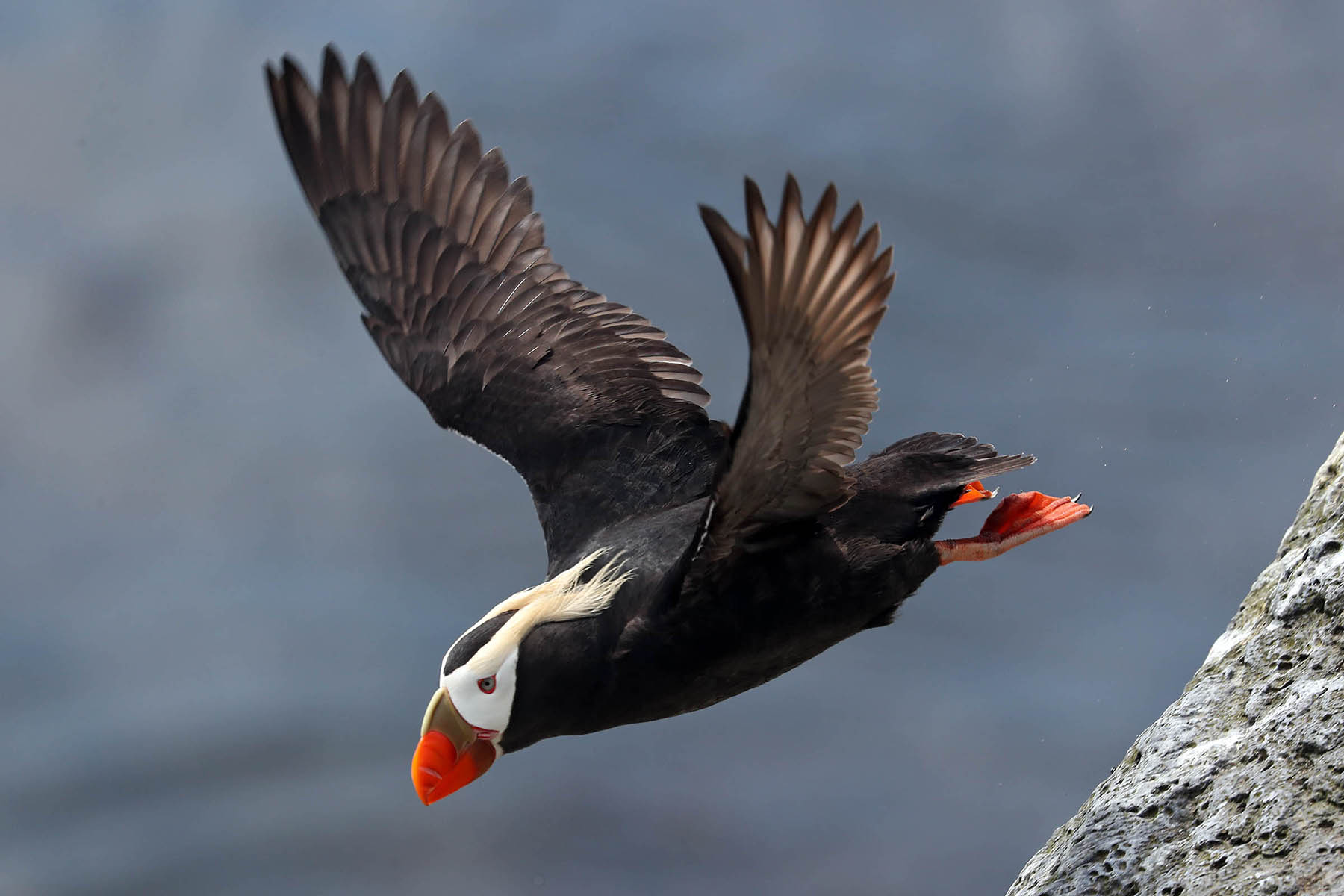 Below: Landing is another thing. Since puffins have to fly rapidly to maintain lift, landing poses a challenge. How do they land on a narrow ledge while flying rapidly—aren’t crash landings a problem? They solve the problem by flying in to the cliffs well below where they want to land, and then glide upwards steeply towards their target, letting gravity serve as the brakes. By the time they arrive at their destination they are going slowly enough for a controlled landing. The Horned Puffin below is beginning the steep part of its ascent. 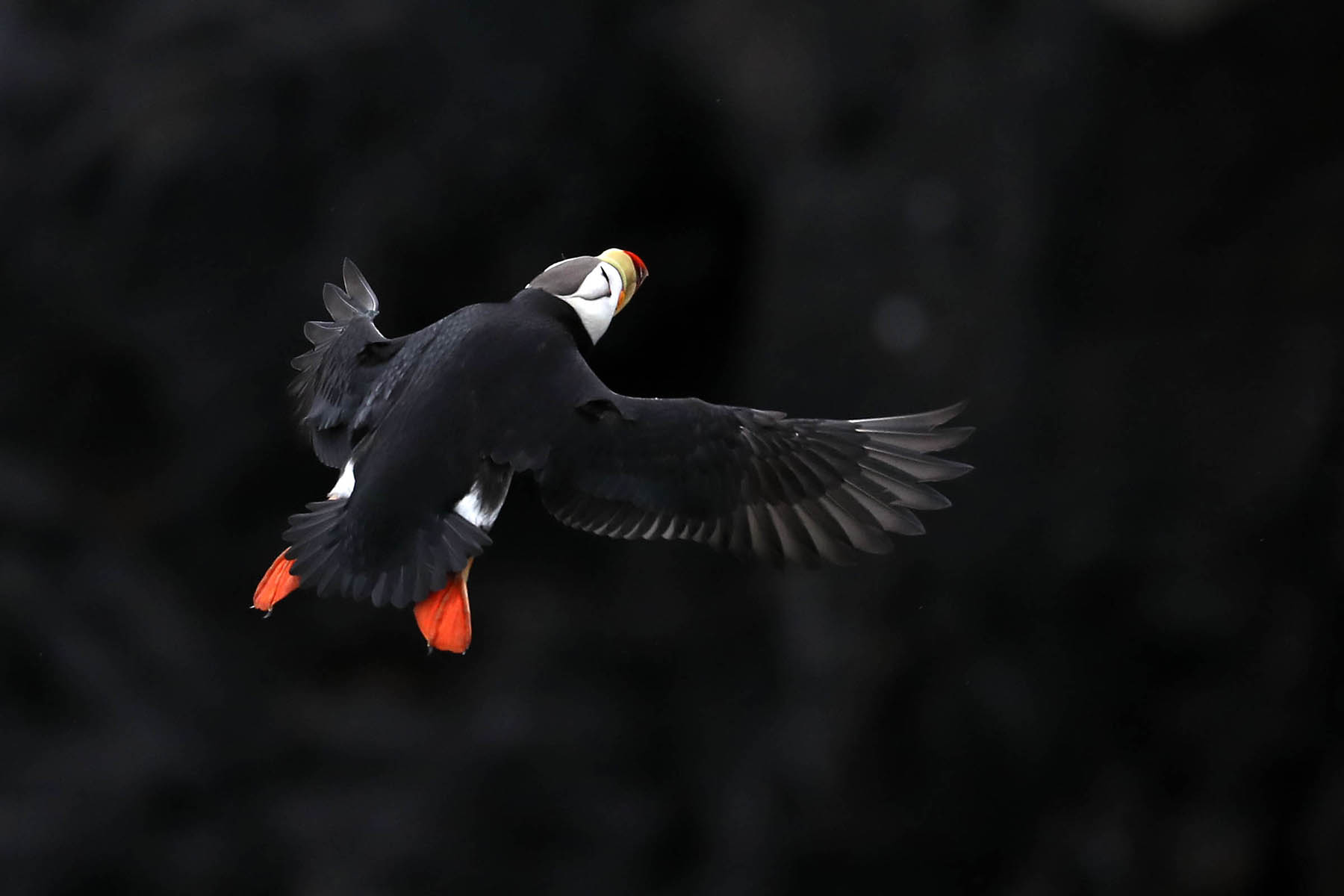 Below: What the approach to a landing looks like from below. Here I was shooting from the base of the cliffs. 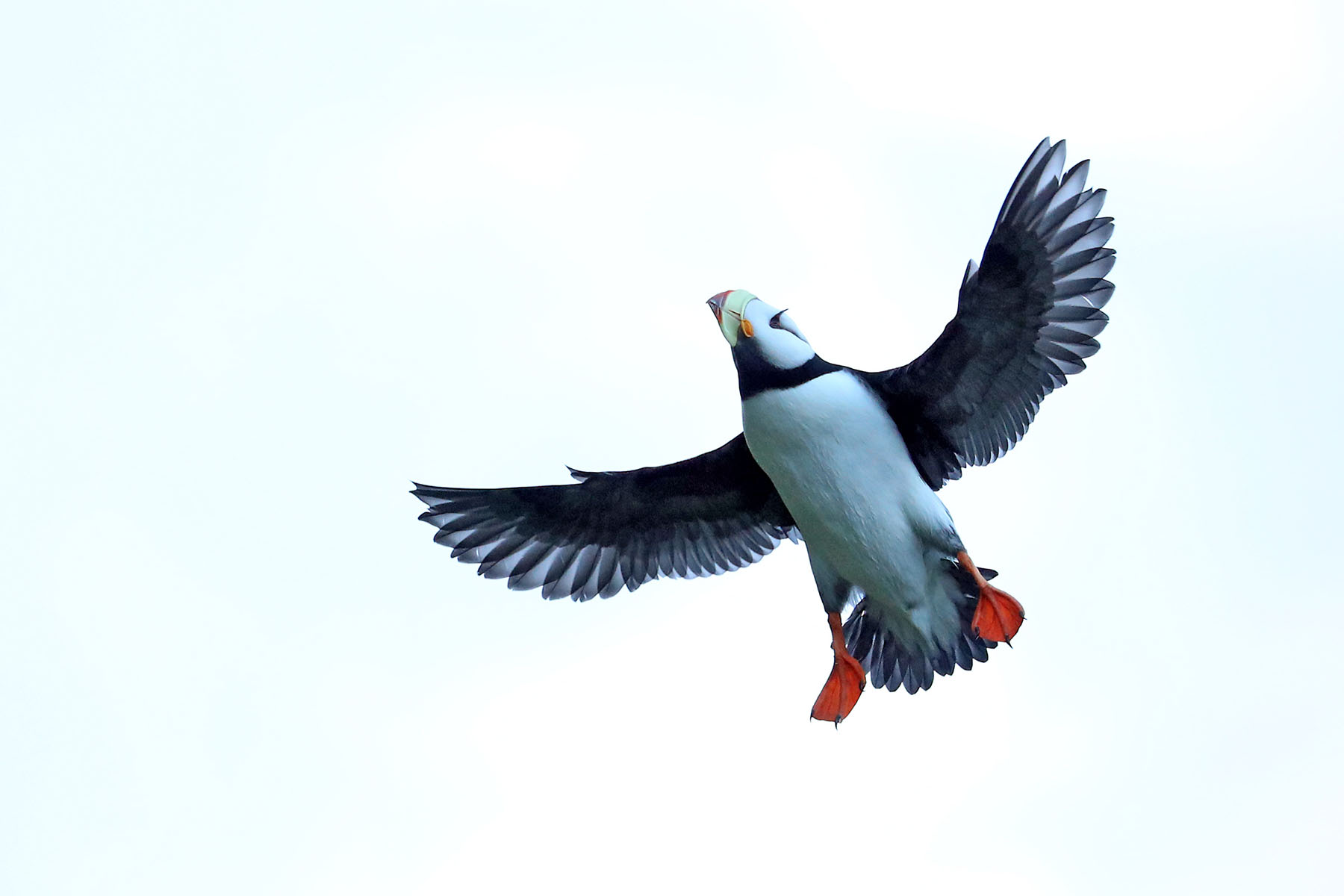 Below. At St. Paul, both species nest in rock crevices. Here a pair of Horned Puffins looks out from the entrance to their nest cavity. We were there early in the season, so the birds were just setting up shop and we saw mostly pairs of bird. During incubation, one bird would be out of sight sitting on the single egg back in the crevices so we would not have seen pairs had we come later in the season.

Although Tufted Puffins nest in rock crevices at St. Paul, further south they nest on flat islands and dig burrows in the soil and nest a few feet under ground. Several decades ago I had my first encounter with a Tufted Puffin burrow, at a nesting colony near Tofino, British Columbia. And what an encounter!  I found a burrow and stuck my arm in as far as it would go to see if the burrow was occupied. I was wearing a thick work glove for protection. The burrow was indeed occupied and a bird clamped on to my glove and wouldn’t let go. When I pulled my arm out a Tufted Puffin came along for the ride, clamped like a vice grip on to the glove. I wanted to see if burrow contained an egg or chick so I tucked the bird under my arm pit and leaned down to stick my arm back in the burrow. Bad idea! As soon as I leaned down, the puffin reached out and clamped onto my nose, hard! The tip of the beak has a bit of a sharp tip so the bird had a very good purchase. The bite was so strong that I could not get the bird to let go with a single hand and I did not want to let the bird go to use both hands because I feared it would flail about and in the struggle rip a giant tear in my nose. My friend was wandering around the island somewhere but I had to spent a good fifteen minutes looking for him, holding on to the puffin for dear life with my nose bleeding profusely. I eventually found my friend and he helped me extract the puffin.  The next year I gave my first natural history slide show, to a local natural history club, and my talk was titled: “There’s a puffin on my nose.” 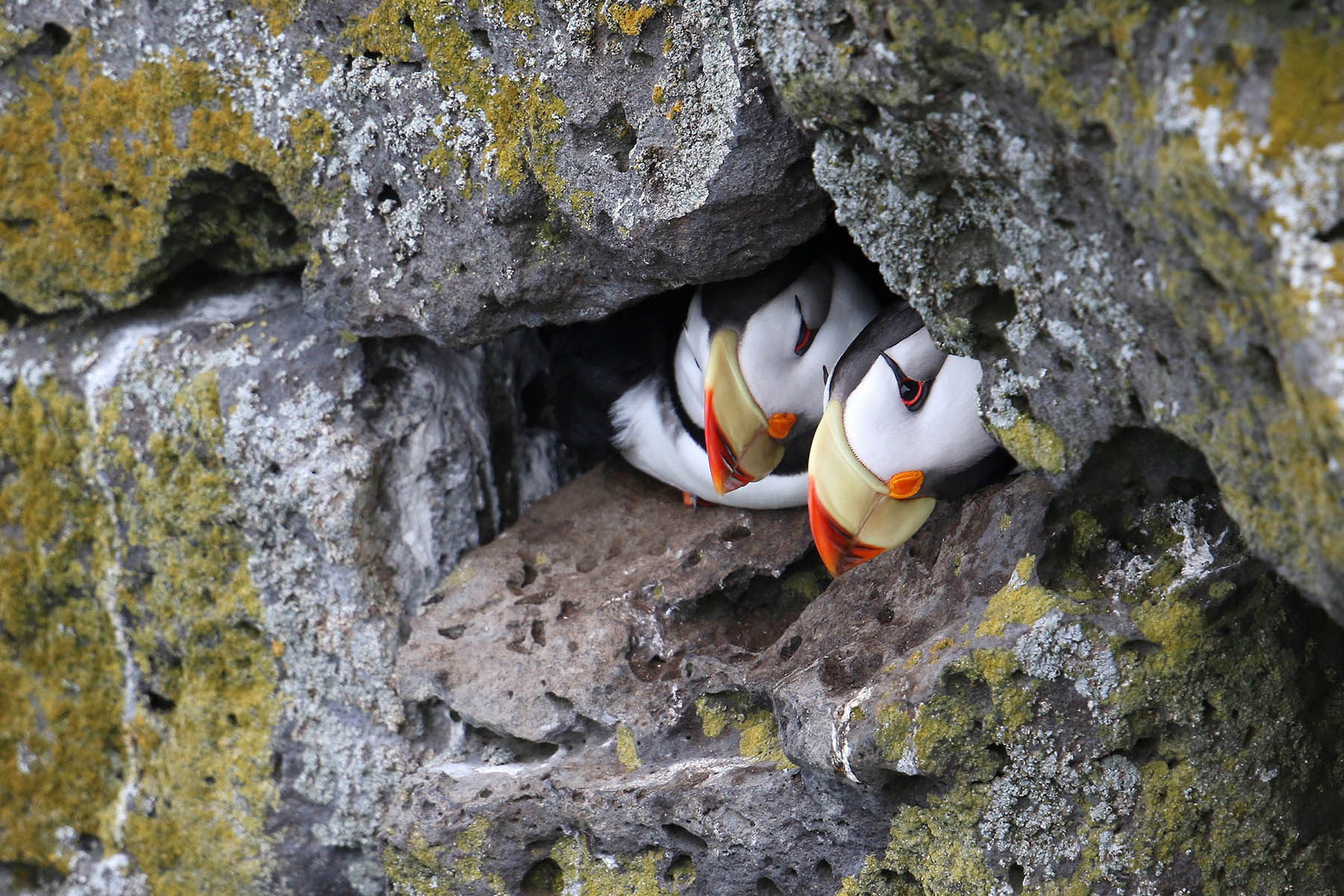 Below: At St. Paul, both puffin species line their nest cup back in the crevice with grass and twigs. The bird on the right had just taken a load of green grass into the cavity and the pair then had what seemed to me like a celebratory ceremonial exchange of the dinky twig the bird on the left is holding. The twig was not taken into the cavity. 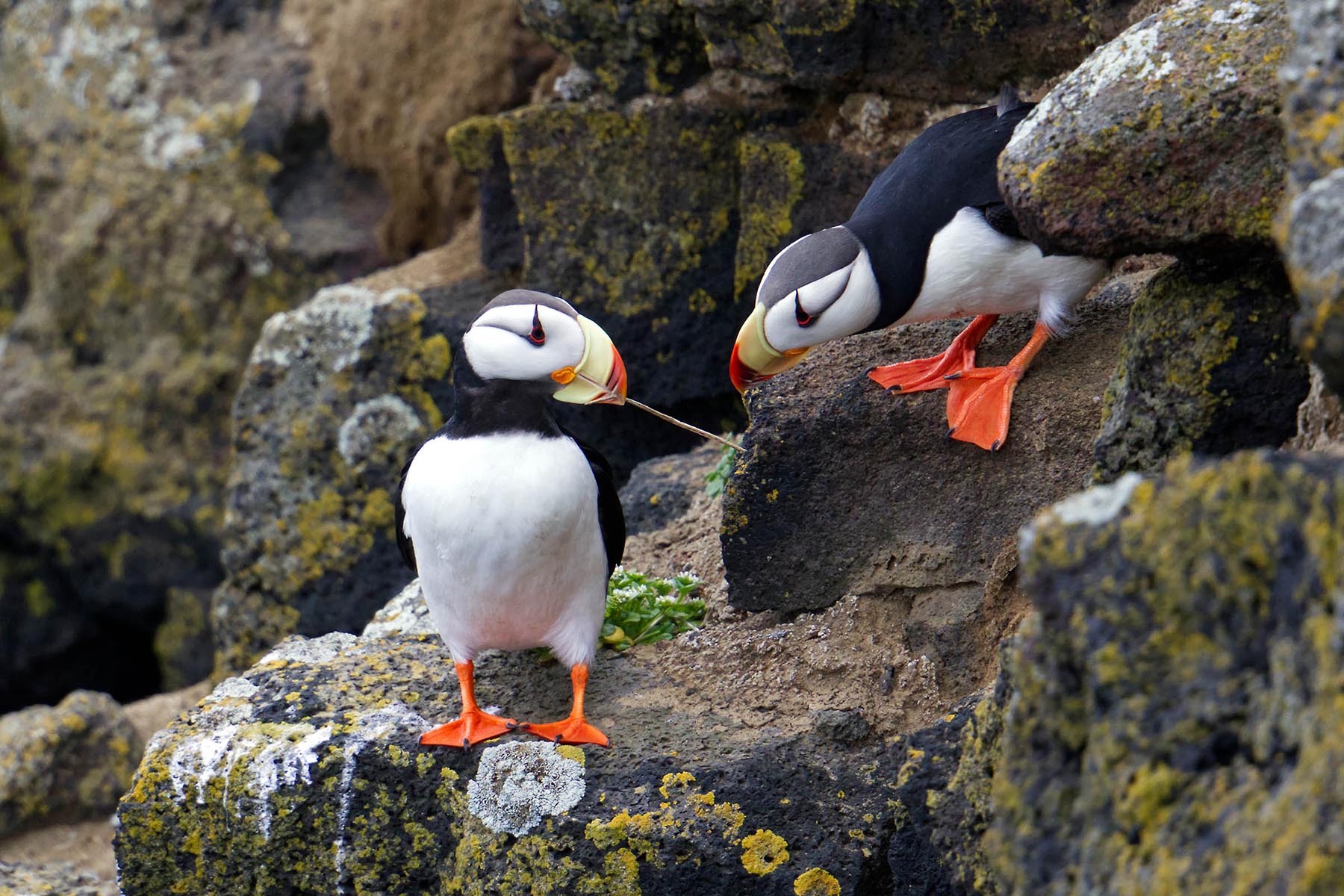 Below: a couple of winsome poses of a Horned Puffin that chose an attractive nest cavity festooned with attractive lichen. 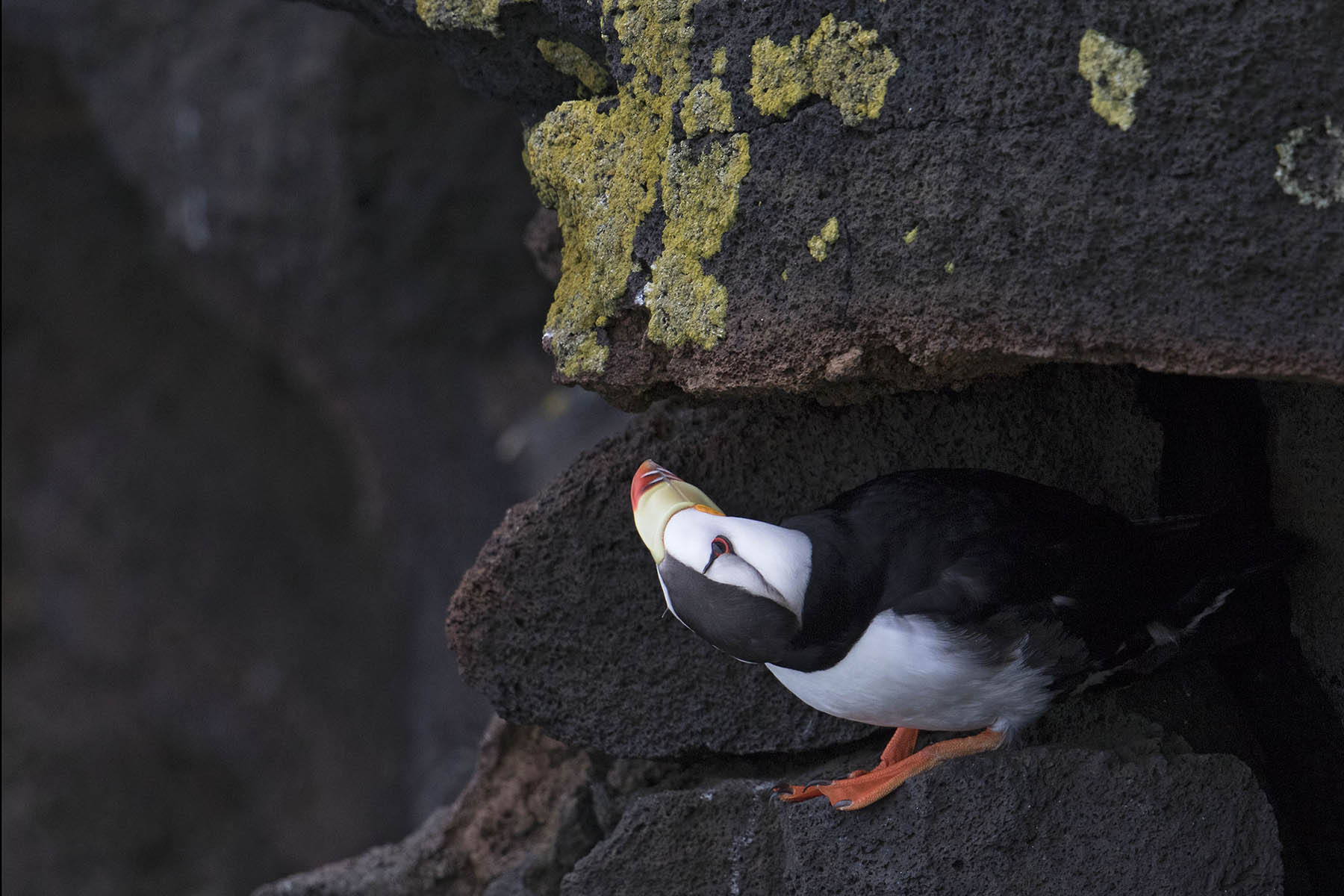 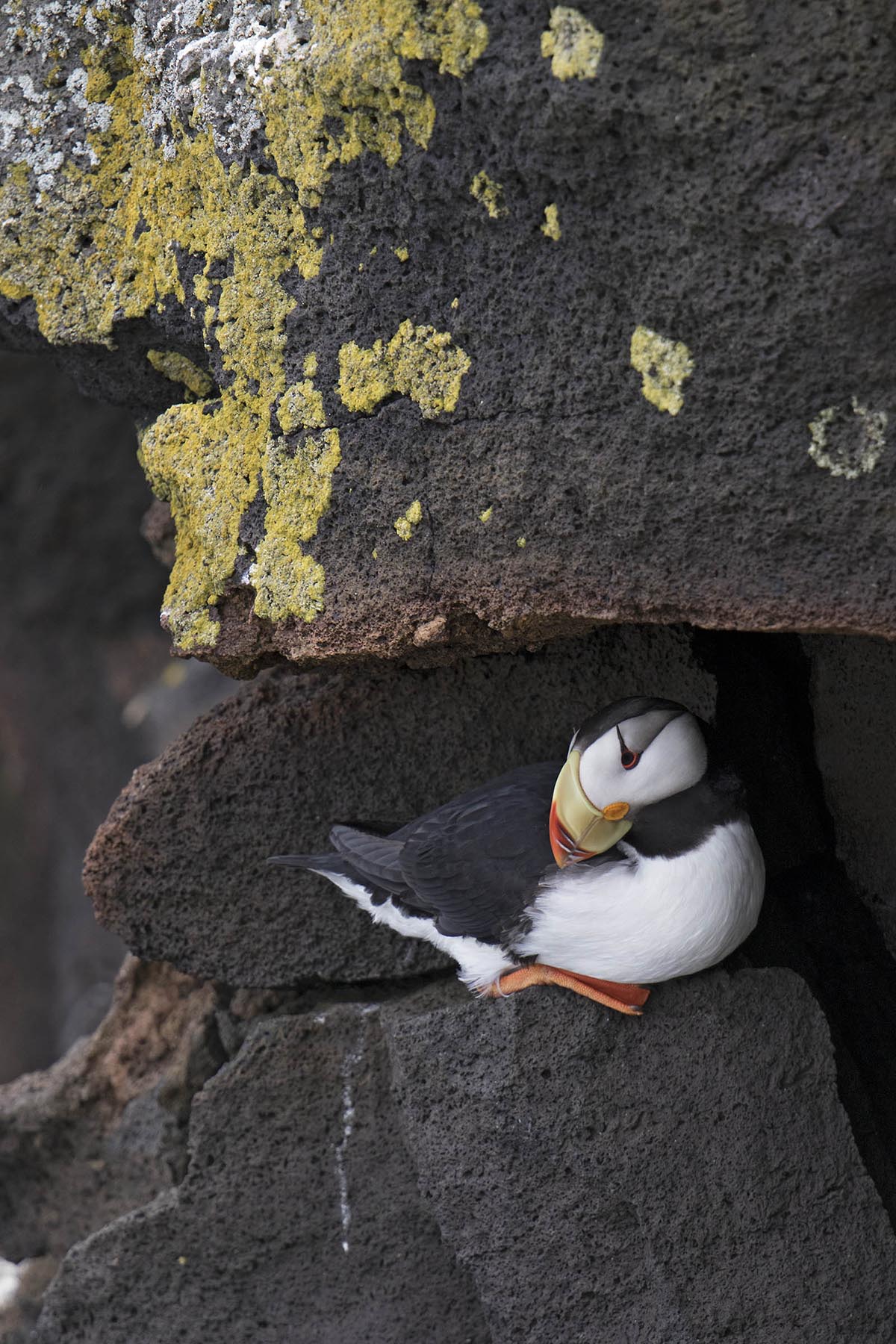 Below: Tufted Puffins on St. Paul Island made international headlines earlier this year, for sad reasons. This past winter (Oct-Jan) there was a massive die off—350 dead seabirds washed up on the beaches of St. Paul Island and 80% of these were Tufted Puffins. Extrapolations of the numbers concluded that overall mortality was somewhere between 3000 and 9000 birds. Carcass analysis showed that the birds had starved, and they were also growing new feathers. There is speculation that the combination of low food availability and molt stress (costs of growing new feathers) did them in. Interestingly, there were no Horned Puffins in the mix, presumably because they winter elsewhere or eat different prey species.

Just prior to the die-off, scientists had noticed a large shift in the zooplankton base of the food web in the area, associated with warming water temperatures. Such shifts in food do occur naturally due to long-term oscillations in sea temperatures (e.g. the Pacific Decadal Oscillation) but a recent paper (open access here) suggests that this particular event may be due to climate change. Apparently, there have been several similar large-scale die offs in the past five years in various parts of the Bering Sea, and some species are showing population declines in the southern parts of their range. There is concern that a lot of these northern seabird species could be severely impacted by climate change. The photo mentioned above. 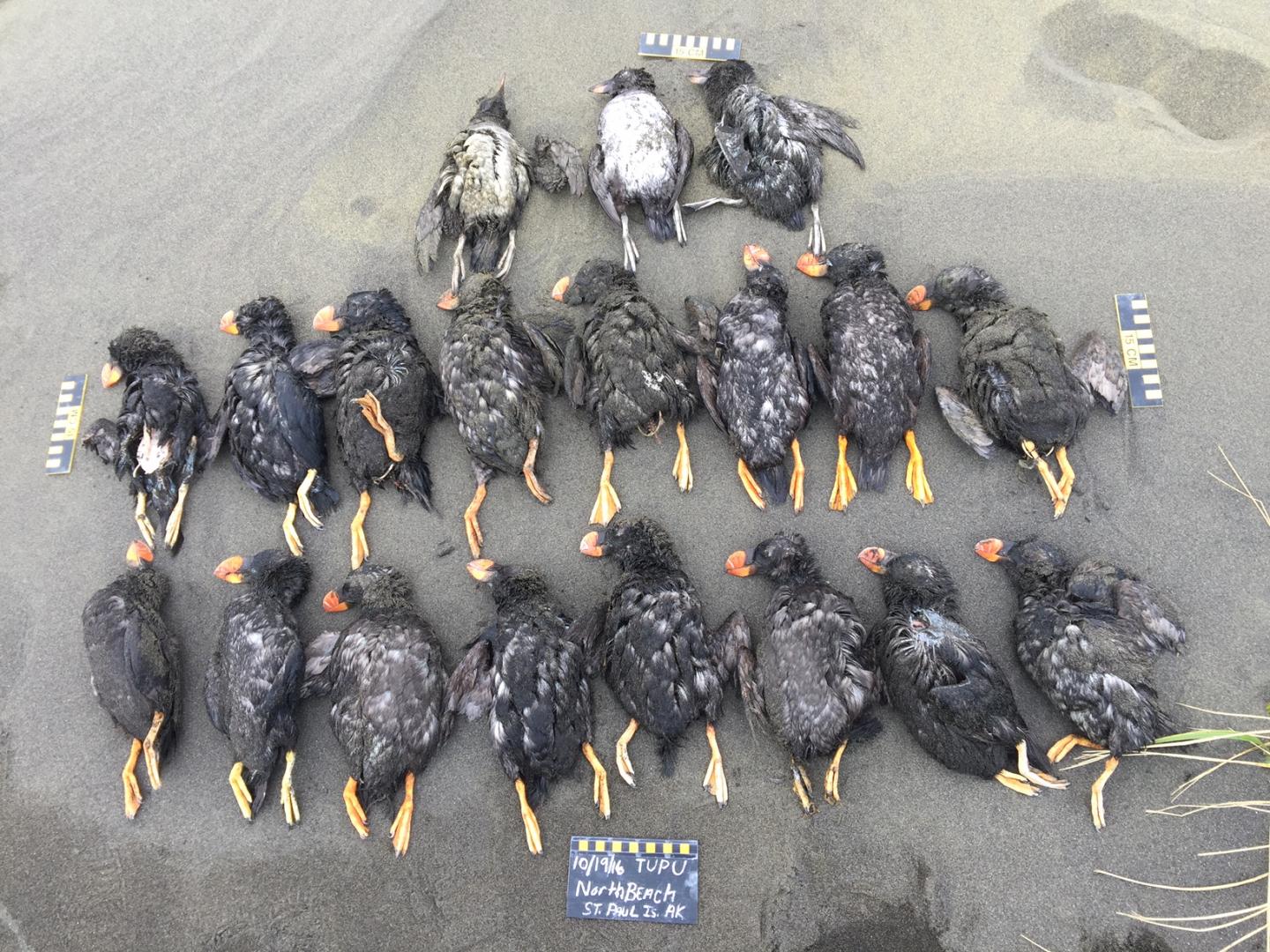