I guess Tyson was trying to make a point about data and how we receive it when he issued the tweet below yesterday, but it was surely ill-timed—and also somewhat misleading.

In the past 48hrs, the USA horrifically lost 34 people to mass shootings.

On average, across any 48hrs, we also lose…

Often our emotions respond more to spectacle than to data.

It clearly looks crass and uncaring. SFgate discusses some of the pushback, including this tweet from a lawyer and writer:

Your data is wrong Neil. In the past 48 hours, 200 people were killed with guns and many more were injured while a powerful organization lobbies to protect its interests.

Maybe you should add some emotion to your game, because your data collection sucks. https://t.co/CLJmiVBlev https://t.co/7qoeIGcaav

I was curious about this disparity, so I looked up the data. It turns out that, according to FiveThirtyEight, there were 33,000 gun deaths per year in America in 2015:  about 90 per day or 180 every 48 hours. Of these, two-thirds are suicides and 1/3 are homicides, so at a minimum there 60 homicides every 48 hours and, in that period, 120 suicides committed with guns. So Tyson was close to the mark, while Vanderpool lumped suicides and homicides as “people killed with guns.” That’s true, but killing oneself differs in several ways from killing somebody else, and lumping them is misleading.

But even if Tyson’s data be correct, it’s simply insensitive to try to make a point like this when hundreds are people are grieving over the three mass shootings we’ve had in the last week. Further, as Vanderpool notes, there are powerful lobbies—most notably the National Rifle Association (NRA)—trying to keep guns, including assault rifles, in the hands of Americans.

In contrast, there are no lobbies trying to promote sloppy medical practice, increase the amount of flu (except, perhaps, for anti-vaxers) or encourage more car accidents. In other words, perhaps the issue of gun deaths is more easily prevented, at least in theory, by direct action—banning or severely restricting gun ownership. Reducing car accidents and medical errors is much more difficult. (Further, restricting the availability of guns would surely cut down on the number of suicides, which give people an easy and quick way to kill themselves on impulse. I have no doubt that strong restrictions on gun ownership would drastically cut back the number of suicides: those who in a moment of depression grab a gun may be less likely to use other methods like taking pills, jumping in front of trains, or leaping off a bridge.)

I say, “in theory” above because while a gun ban is easy to craft, there are too many Americans who love and cherish their guns, and the NRA lobby is too powerful, to help us get strong and sensible gun restrictions. I myself favor a system along the lines of what they have in Britain, with a ban on private ownership of handguns and very strict ownership of rifles.

What makes me sad is that each time there’s a mass murder with guns—and now we’ve had three in a row—there’s a temporary uproar and call for bans or restrictions on guns. But in two weeks or so it all dies down and we’re back to being gun-loving America. 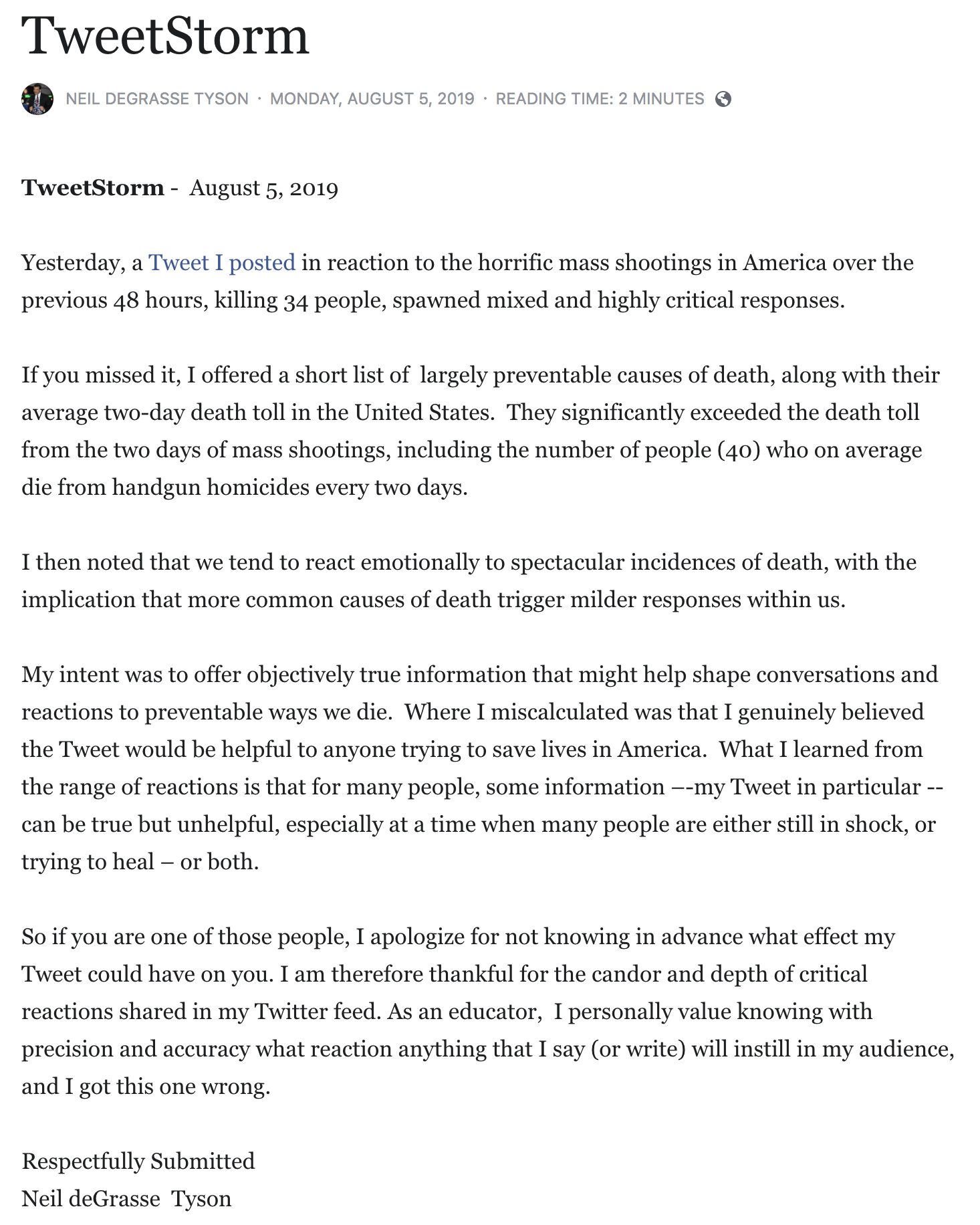 That’s a decent apology, but Tyson, like many people on Twitter and other social media, should have thought before he tweeted. Anyone could have told him that the tweet above would not be received lightly, and that the point it was supposed to make wasn’t really worth making. Given the difference in reasons for gun deaths in America on one hand, and medical errors and car crashes on the other, I’m not sure how helpful his tweet was in “saving lives in America.”

194 thoughts on “An unwise tweet by Neil deGrasse Tyson, and some statistics on gun deaths”