A while back I wrote a critique on this site of computer scientist David Gelernter’s attack on evolutionary theory, itself published in the conservative venue The Claremont Review of Books. Here’s a link to his original piece (click on screenshot): 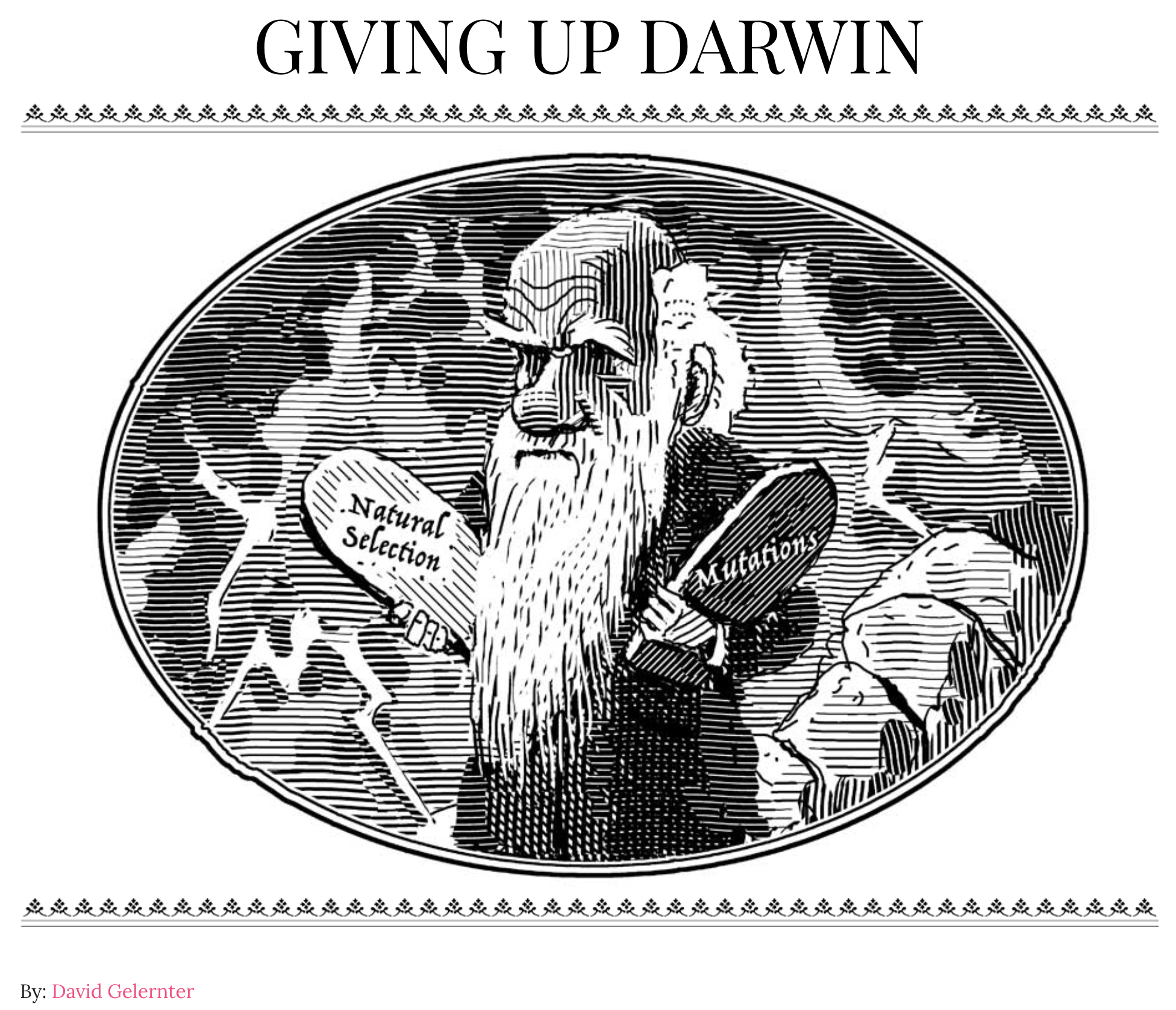 My critique, as is usual with pieces on WEIT, was written quickly, so I didn’t bother to insert references to the many criticisms of Gelernter’s ideas, ideas that are taken without alteration from Intelligent-Design books by Stephen Meyer, William Dembski, and the usual suspects.

When Quillette asked me if I wanted to respond to Gelernter’s piece, I was a bit puzzled. First, I’d already written a response here, and second, Gelernter’s piece came out in May. It turns out that Quillette didn’t know I’d already addressed the piece, and the more recent interest in Gelernter’s piece was apparently because it got a fair amount of publicity from religious, conservative, and Intelligent Design websites, and was touted in a bizarre video featuring Gelernter discussing the fatal flaws of Darwinism with Meyer, David Berlinski, and Hoover Institute flack Peter Robinson.

You won’t learn anything new from the video; the most striking bit is Berlinski’s attire. Somewhat of a fop and always dressed impeccably, here Berlinski dresses like a biker, complete with jeans, a teeshirt, a cut-off jean jacket, boots, and a gold-headed cane (screenshot below). What gives?

Back to the narrative. I decided to accept Quillette‘s invite so I could rewrite the piece from scratch, linking to the many papers that rebut Gelernter’s claims about the sudden Cambrian “explosion”, the improbability of “early-development” genes evolving, the lack of evidence for “speciation” (a process that Gelernter apparently misunderstands), and so on.  And so my piece appeared yesterday (click on screenshot): 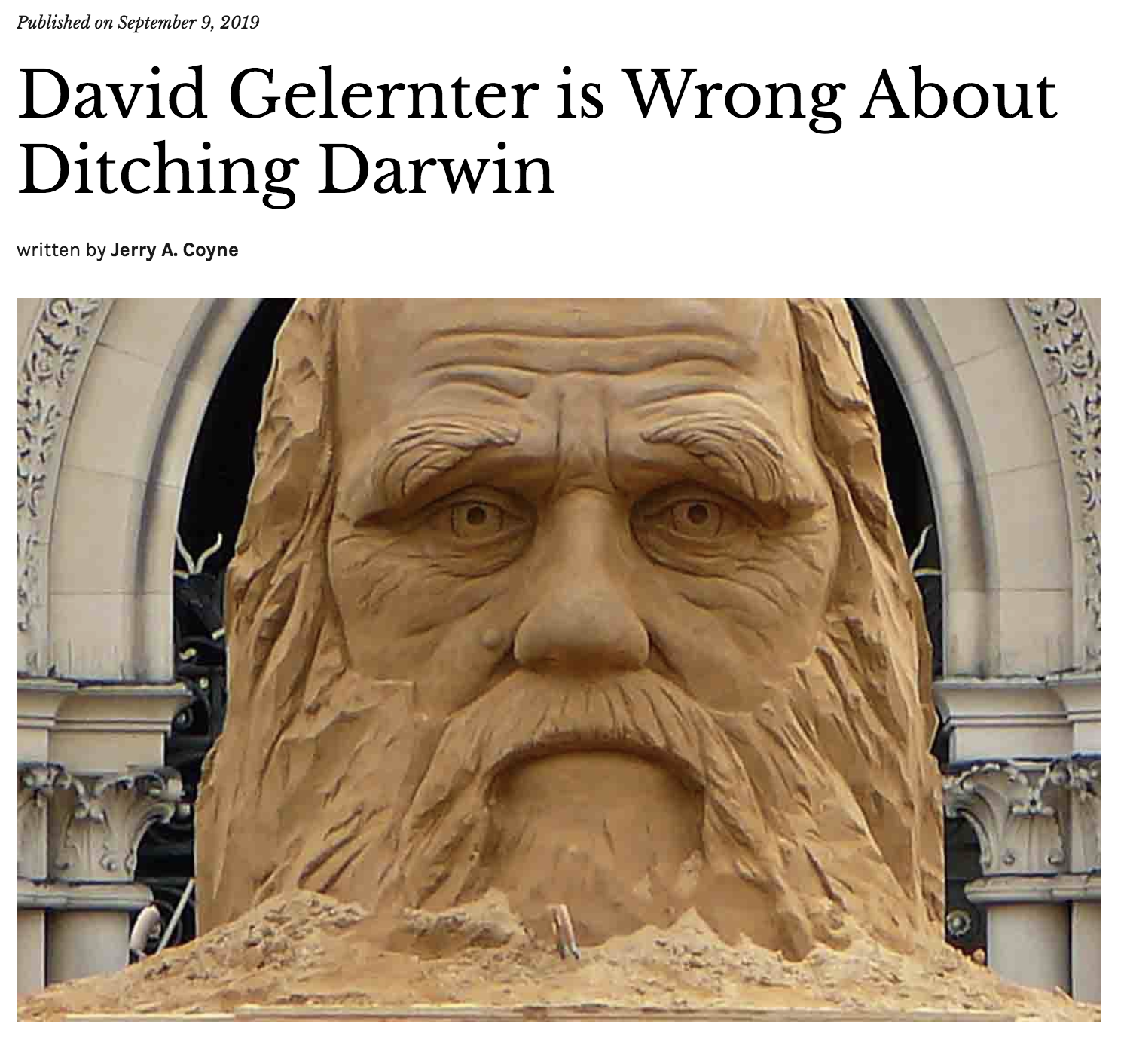 I don’t have anything to add to that piece, except that I left out a lot of references that could have been used as supplemental ammunition (one, for instance, is paleontologist Don Prothero’s scathing critique on Skepticblog of Stephen Meyer’s “Cambrian Explosion Proves ID” book, Darwin’s Doubt: The Explosive Origin of Animal Life and the Case for Intelligent Design).

Here I want to address a few ancillary issues. The first is why Gelernter, who apparently has a high reputation in computer science, would drink the ID Kool-Aid. Seriously, his reputation, regardless of his previous achievements, will forever be tarred by his embracing of ID creationism. Perhaps he’ll join the Discovery Institute.  At any rate, it doesn’t add much to a rebuttal such as mine to speculate in detail about the motivations of someone like Gelernter. But his piece’s references to God and religion, and his own Judaism (apparently not he secular brand) made me think that he’s susceptible to ID because it supports a view of life that, if not explicitly creationist, is at least teleological.

As for why a Yale prof would embrace "intelligent design": Enemy-of-my-enemy-ism. I've seen many smart nonleftists not-so-smartly rebound to whatever they think is the opposite of PC orthodoxy: dogmatic libertarianism, Trump, creationism. https://t.co/8K8Iw0KVkR via @Quillette

And Steve wrote me privately (quoted with permission):

In terms of why Gelernter took this path, I wouldn’t underestimate enemy-of-my-enemy-ism. People fed up with campus PC orthodoxy often lurch to whatever they think is the opposite — sometimes ideological libertarianism, sometimes Trumpism, sometimes ID. After all, they reason, campus leftists hate the Christian right; therefore the Christian right can’t be all bad. I’ve had non-leftist friends ask me hopefully if there is some major flaw in Darwinism, figuring that they have a non-PC ally, and they’re crushed when I say there isn’t.

Indeed, Gelernter has leaned strongly right and has also been a vocal critic of “PC orthodoxy”. Wikipedia says this about him:

Gelernter has critiqued what he perceives as cultural illiteracy among students. In 2015, he commented, “They [students] know nothing about art. They know nothing about history. They know nothing about philosophy. And because they have been raised as not even atheists, they don’t rise to the level of atheists, insofar as they’ve never thought about the existence or nonexistence of God. It has never occurred to them. They know nothing about the Bible.”  Time Magazine profiled Gelernter in 2016, describing him as a “stubbornly independent thinker. A conservative among mostly liberal Ivy League professors, a religious believer among the often disbelieving ranks of computer scientists.” In October 2016, he wrote an op-ed in The Wall Street Journal endorsing Donald Trump for President, calling Hillary Clinton “as phony as a three-dollar bill,” and saying that Barack Obama “has governed like a third-rate tyrant.”  The Washington Post, profiling him in early 2017 as a potential science advisor to Donald Trump, called him “a vehement critic of modern academia” who has “condemned ‘belligerent leftists’ and blamed intellectualism for the disintegration of patriotism and traditional family values.” David Gelernter does not believe in anthropogenic climate change.[14] In July 2019, Gelernter challenged Darwin’s theories. According to Gelernter, “The origin of species is exactly what Darwin cannot explain”.

Regardless of Gelernter’s motives, his critique of evolution is absolutely dreadful, full of holes and misleading claims. He should be ashamed of himself.

At the outset of my piece, I asserted that I wasn’t criticizing Gelernter’s views because he hadn’t been trained in evolutionary biology or even biology (neither were Darwin and Mendel). In a post on his own website, Shtetl-Optimized, computer scientist Scott Aaronson does note the falling-away of Gelernter from even computer science “conservative punditry”:

Speaking of empiricism, if you check Gelernter’s publication list on DBLP and his Google Scholar page, you’ll find that he did influential work in programming languages, parallel computing, and other areas from 1981 through 1997, and then in the past 22 years published a grand total of … two papers in computer science. One with four coauthors, the other a review/perspective piece about his earlier work. So it seems fair to say that, some time after receiving tenure in a CS department, Gelernter pivoted (to put it mildly) away from CS and toward conservative punditry. His recent offerings, in case you’re curious, include the book America-Lite: How Imperial Academia Dismantled Our Culture (and Ushered In the Obamacrats).

Some will claim that this case underscores what’s wrong with the tenure system itself, while others will reply that it’s precisely what tenure was designed for, even if in this instance you happen to disagree with what Gelernter uses his tenured freedom to say. The point I wanted to make is different, though. It’s that the question “what kind of a field is computer science, anyway, that a guy can do high-level CS research on Monday, and then on Tuesday reject Darwinism and unironically use the word ‘Obamacrat’?”—well, even if I accepted the immense weight this question places on one atypical example (which I don’t), and even if I dismissed the power of compartmentalization (which I again don’t), the question still wouldn’t arise in Gelernter’s case, since getting from “Monday” to “Tuesday” seems to have taken him 15+ years.

Finally, although the readers’ comments on my Quillette piece are only starting to accumulate, it’s already devolved into a free-for-all, with several readers making ridiculous claims about evolution’s flaws and a few others defending real science. This one—the very first comment—makes me (as the young folk say) “facepalm”: 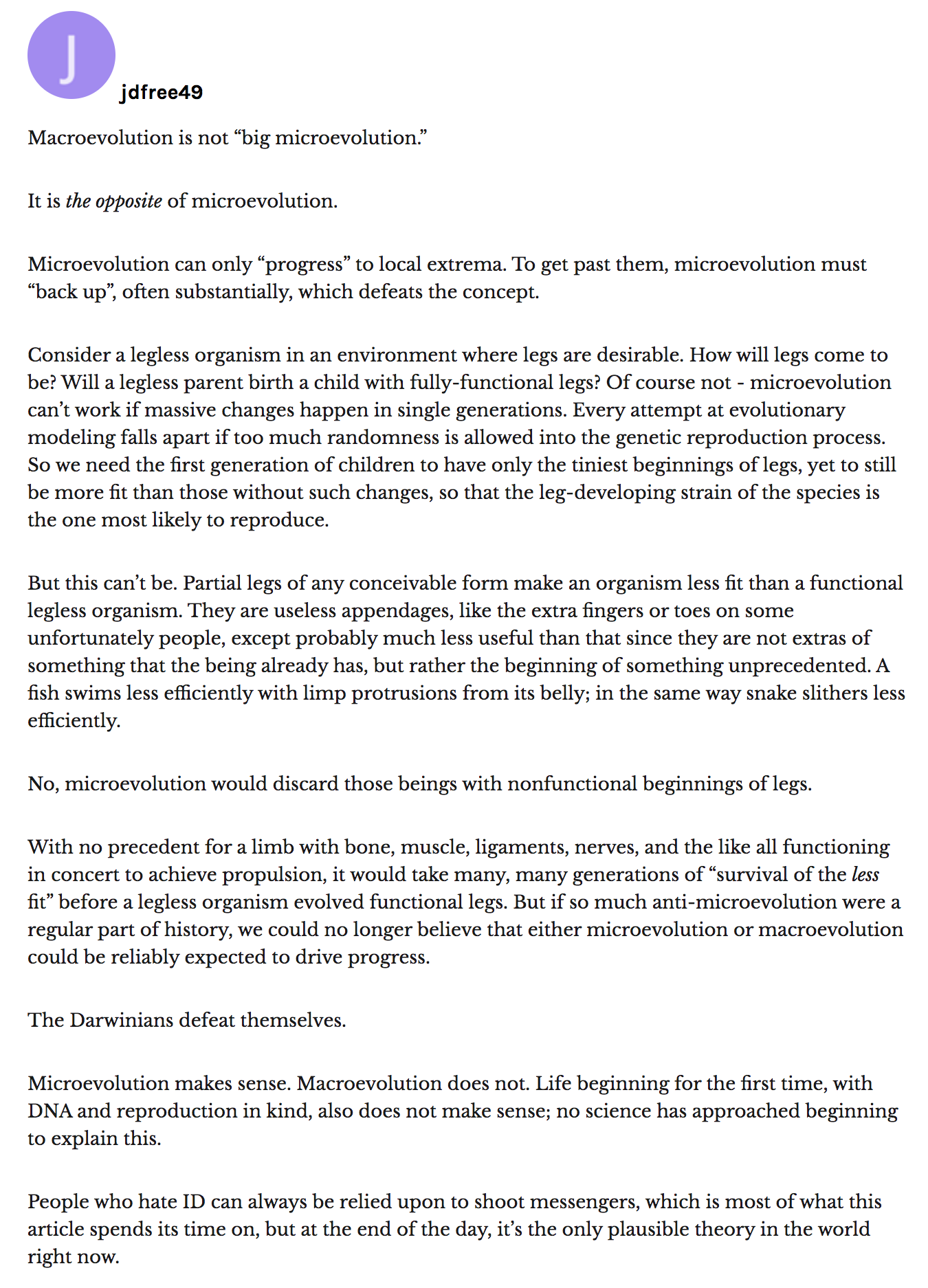 This is complete nonsense. “jdfree49” not only gives no reason why microevolution has to “back up” before making the big leap to macroevolution, like a person jumping a gap, but also apparently knows nothing about the evolution of legs, which appear to have evolved from strong bony fins of lobe-finned fish. Has this person ever heard of Tiktaalik? It is this kind of blather, spouted without any apparent knowledge of the data we have, that infuriates me.

And there’s this one: 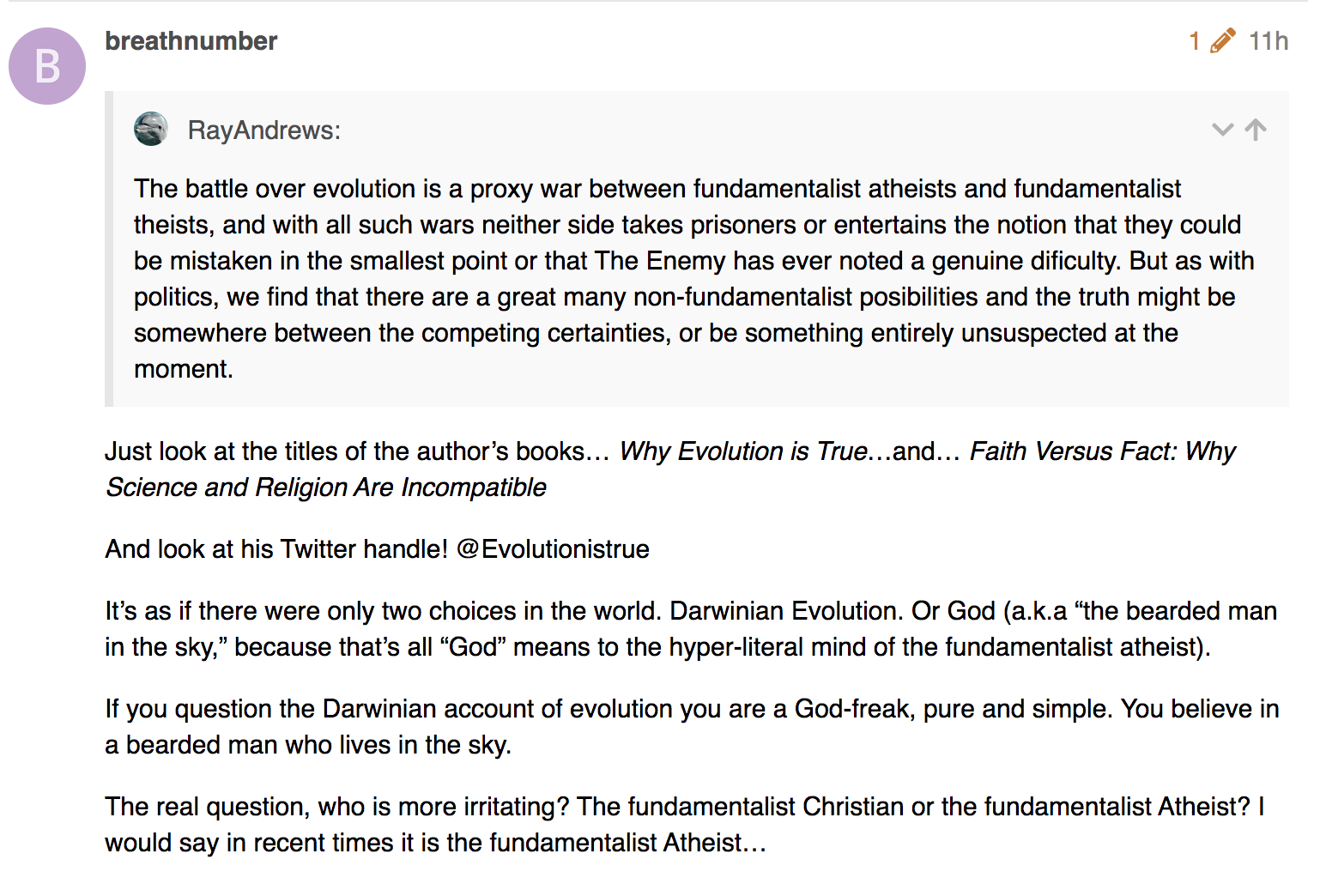 Note that “breathnumber” ignores the fact that my critique of Gelernter is about 90% discussion of the evidence, with a small bit of speculation of how someone as smart as Gelernter could jump the shark. This, I suspect, is how the Discovery Institute will dismiss my article: as a critique of religious motivations rather than of an argument. (They’ll also reiterate Meyer’s flawed arguments.) ID isn’t religious, they’ll say! But of course it is. Every creationist I’ve ever met (and I include IDers in that mix) has been motivated by religion, or at least is religious, with the possible exception of biker David Berlinski.

Like my previous pieces on Quillette, I find that the comments are often quite obtuse—something that surprised me given that Quillette is a more intellectual site than, say, Slate or Salon. Why are the readers so peeved about, and so ignorant of, evolution? Since Quillette often published anti-“PC” pieces, Perhaps Pinker is on to something.

71 thoughts on “More on my Quillette critique of David Gelernter”