David Gelenrter is a well known computer scientist at Yale, famous for his innovations in parallel computing, and is also a writer and artist. He’s a religious Jew, a conservative, and—as of two years ago—a denier of anthropogenic global warming, a view at odds with his scientific background.  In 1993 he was also badly injured in the hand and eye by a mail bomb sent by Ted Kaczynski, the Unabomber.

That was a horrible thing to happen to him, but it can neither explain nor excuse Gelenrter’s science denialism, now manifested in an article in the Claremont Review of Books in which Gelernter tells us that Darwinian evolution is dead, and that Intelligent Design is the happening thing. (Click on screenshot below.)  The article is being trumpeted all over Intelligent Design websites, and I’m baffled as to how someone of Gelernter’s intelligence could buy into thinly disguised creationism. Could it be his religion? I’d call him a “useful idiot” for the ID people, except he’s not an idiot. 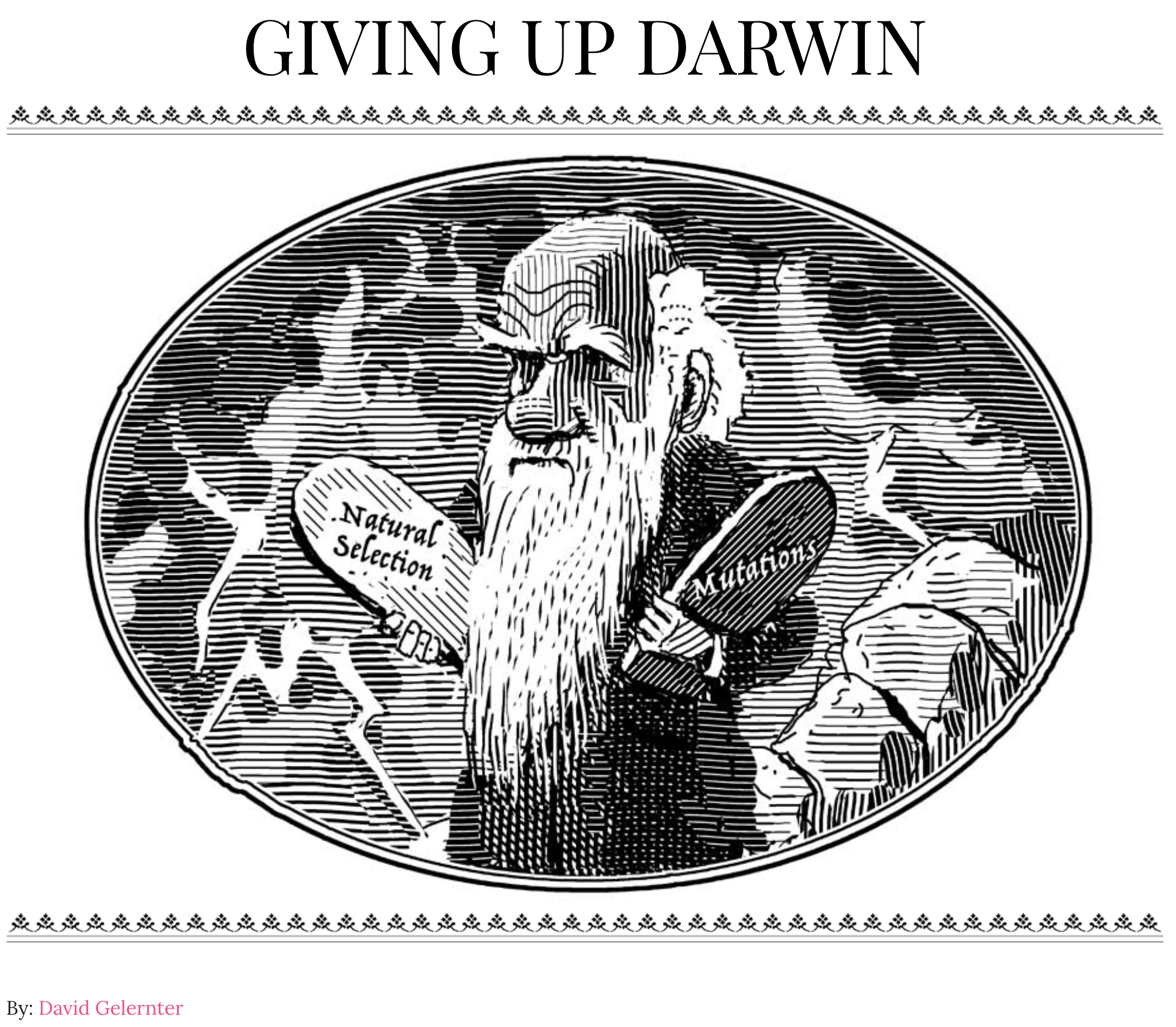 Wikipedia describes the Claremont Review of Books like this:

A typical issue consists of several book reviews and a selection of essays on topics of conservatism and political philosophy, history, and literature. The New York Times described the journal as a “conservative, if eclectic, answer to The New York Review of Books.”

So it’s the National Review of book appraisal. But never mind: the content of Gelernter’s review is disturbing. He begins by telling us that Darwinian evolution is not only wrong, but dead:

Darwinian evolution is a brilliant and beautiful scientific theory. Once it was a daring guess. Today it is basic to the credo that defines the modern worldview. Accepting the theory as settled truth—no more subject to debate than the earth being round or the sky blue or force being mass times acceleration—certifies that you are devoutly orthodox in your scientific views; which in turn is an essential first step towards being taken seriously in any part of modern intellectual life. But what if Darwin was wrong?

Like so many others, I grew up with Darwin’s theory, and had always believed it was true. I had heard doubts over the years from well-informed, sometimes brilliant people, but I had my hands full cultivating my garden, and it was easier to let biology take care of itself. But in recent years, reading and discussion have shut that road down for good.

This is sad. It is no victory of any sort for religion. It is a defeat for human ingenuity. It means one less beautiful idea in our world, and one more hugely difficult and important problem back on mankind’s to-do list. But we each need to make our peace with the facts, and not try to make life on earth simpler than it really is.

Gelenrter then goes on to parrot the familiar tropes of ID, the most prominent being that the Cambrian Explosion could not have been caused by evolution because there are no credible ancestors of the evolved taxa and that the whole thing simply took place too fast to be explained by neo-Darwinian processes. Here he leans heavily on Stephen Meyer’s ID book Darwin’s Doubt, which, says Gelenrter, “convinced me that Darwin has failed.” Presumably Meyer thinks that the Great Designer poofed the Cambrian Explosion into being, although Gelernter may see that designer as Yahweh.

But Meyer’s book has been unanimously criticized by paleontologists as uninformed and tendentious, and, as I wrote before about it:

Those familiar with Meyer’s “theories” of ID, contained in his two books Signature in the Cell and Darwin’s Doubt, will see them trotted out in the video below. I won’t waste time showing how they’ve been rebutted, but will just give you some links to read (you can see other criticisms in the Wikipedia entry for Meyer). Some good rebuttals of Meyer’s creationism can be found here, here, here, here, here, here, and here.

I’ll note two more scathing reviews of the book that Gelernter touts so highly: one by Charles Marshall and the other (a long review on Amazon) by Don Prothero.

Gelernter also falls for many other discredited claims of ID. One is his assertion that “random mutation plus natural selection” are not sufficient to create new protein shapes, which is equivalent to the claim that these processes are not sufficient to create new protein sequences. He commits the same fallacies as do other IDers: assuming there is a pre-specified target protein that must be reached, multiplying probabilities together to convert a starting “gibberish protein” into one folded like a specified target. (By the way, evolution doesn’t start with “gibberish proteins”.) The fact is that there aren’t pre-specified target proteins: all that’s required for evolution to work is that a mutation changes a gene (and its protein product) in a way that that new gene leaves more copies than do other genes. It’s incremental form of improvement, not a narrowing-in on a specific target—a target that may not be reached because another adaptive target was reached instead.

Finally, Gelernter shows his profound ignorance of biology by making the tired old claim that there may be microevolution (changes within “kinds,” whatever they are) but there’s no evidence for macroevolution. And by macroevolution he means not just the emergence of drastically different forms of organisms, but “the emergence of new species”. As he says, “The origin of species is exactly what Darwin cannot explain.”

Well, as I show in my book Speciation with Allen Orr, and in my popular book Why Evolution is True, we do have ample evidence for the origin of new species by evolutionary processes. We’ve even seen new species form within a human lifetime. (True, Darwin himself didn’t explain speciation because his species concept was wonky, but we’ve come a long way since then; we don’t need Darwin as a buttress for all evolutionary facts.)

And we also have evidence for really big macroevolution, for we have transitional forms between early fish and amphibians, between early amphibians and reptiles, between early reptiles and birds, between early reptiles and mammals, and, of course, between our early hairy and knuckle-walking ancestors and modern H. sapiens. We don’t know which genes were involved in most of these transitions, but that’s a red herring brandished by Gelernter. The fact is that we can see in the fossil record the gradual evolution of mammals from reptiles, and so on, showing that macroevolution did indeed take place. Does Gelernter think that the Designer was behind this macroevolution, producing the needed mutations at the right time? If that’s the case, why did the Designer screw up when making dinosaurs and a gazillion other species that went extinct because they didn’t get the right mutations?

At the end, Gelernter pulls back a bit and says that ID does have problems, including a lack of mechanism. He suggests his own mechanism, but it’s an unspecified form of teleology, one that, I suspect, goes by the name Yahweh:

If Meyer were invoking a single intervention by an intelligent designer at the invention of life, or of consciousness, or rationality, or self-aware consciousness, the idea might seem more natural. But then we still haven’t explained the Cambrian explosion. An intelligent designer who interferes repeatedly, on the other hand, poses an even harder problem of explaining why he chose to act when he did. Such a cause would necessarily have some sense of the big picture of life on earth. What was his strategy? How did he manage to back himself into so many corners, wasting energy on so many doomed organisms? Granted, they might each have contributed genes to our common stockpile—but could hardly have done so in the most efficient way. What was his purpose? And why did he do such an awfully slipshod job? Why are we so disease prone, heartbreak prone, and so on? An intelligent designer makes perfect sense in the abstract. The real challenge is how to fit this designer into life as we know it. Intelligent design might well be the ultimate answer. But as a theory, it would seem to have a long way to go.

. . . I might, myself, expect to find the answer in a phenomenon that acts as if it were a new and (thus far) unknown force or field associated with consciousness. I’d expect complex biochemistry to be consistently biased in the direction that leads closer to consciousness, as gravitation biases motion towards massive objects. I have no evidence for this idea. It’s just the way biology seems to work.

No, Dr. Gelernter, that’s not the way it “seems to work”. Maybe it does to you through your Old-Testament goggles, but there’s no evidence for a directionality, much less a teleology, in evolution.

So ID might not be the final answer, but, says Gelernter, evolution certainly isn’t, either:

[Stephen Meyer] now poses a final challenge. Whether biology will rise to this last one as well as it did to the first, when his theory upset every apple cart, remains to be seen. How cleanly and quickly can the field get over Darwin, and move on?—with due allowance for every Darwinist’s having to study all the evidence for himself? There is one of most important questions facing science in the 21st century.

I’ve pondered at great length how a man can be apparently as intelligent as Gelernter, yet so susceptible to the blandishments of Intelligent Design—and so ignorant of the evidence that refutes it. All I can think of is religion. I may certainly be wrong here, but there’s some mental block that the man has against evidence that has convinced nearly every biologist alive.

Gelenrter has no formal training in biology, and I suppose I could say he doesn’t have the credibility to even attack evolution (he does seem ignorant of the fossil record). But I hate to pull rank and use arguments based on authority. All I can say is that his ignorance is both woeful and harmful, and he is serving as a useful idiot-manqué for the Intelligent Design Creationist movement.