UPDATE: Science has now corrected its post by issuing the addendum below.  As you’ll see in the comments below, author Alex Fox credits this post for the correction, which is gentlemanly of him. Thanks to reader Barry for the spot.

It is a truth universally acknowledged that the two most prestigious science journals in the world are Science, published in the U.S., and Nature, published in England. One would think, then, that their science reporting would be more accurate than the slipshod stuff you see in the science pages of the major media (the NYT is an exception). But Science slipped up this time when reporting on the independent evolution of flightlessness on the island of Aldabra twice: in an ancient white-throated rail that colonized the island and went extinct when sea levels rose, and then in more modern times (i.e., several hundred thousand years ago) when birds from the same flying lineage colonized Aldabra again and once again evolved flightlessness. (Islands lack predators and so flying, which is metabolically expensive, can often be dispensed with to gain other advantages.)

A few days ago I wrote about how nearly all the major media—tabloids and respectable papers alike—mis-reported this finding, saying that the two flightless rails were really the same species, one that had been “resurrected” or “had come back from the dead.” In reality, the three white throated rails (Dryolimnas cuvieri) are designated as subspecies, so even that reporting is wrong. But that’s minor compared to the repeated claim (see my earlier post for screenshots of the distorted headlines) that the very same species had evolved twice.

This was a big boo-boo because calling the modern flightless rail and its extinct flightless analogue members of “the same species” depended only on the similarity of two bones: a wing bone and a leg bone. There was no other fossil evidence, of course, about what the extinct rail looked like, how it behaved, or anything about the rest of its skeleton, its habits, its DNA, or its physiology. It’s simply a misleading whopper to assert that the “same species” evolved twice.

Further, the species concept used by nearly all evolutionary biologists deems two individuals members of the same species if, where they meet in nature, they can mate and produce fertile offspring. It’s a concept based on reproductive compatibility and incompatibility. Doing such a test is not possible in this case because the extinct species never had a chance to cohabit with the modern species. Just as we can’t say whether modern Homo sapiens are members of the same biological species as Homo erectus (note that they’re even given different names, but that’s based on physical differences), so we can’t say whether the ancient and modern flightless rails are members of the same biological species—much less subspecies.

As someone who spent his whole career working on speciation, including species concepts, I was thus disheartened to see this news report in the journal Science: 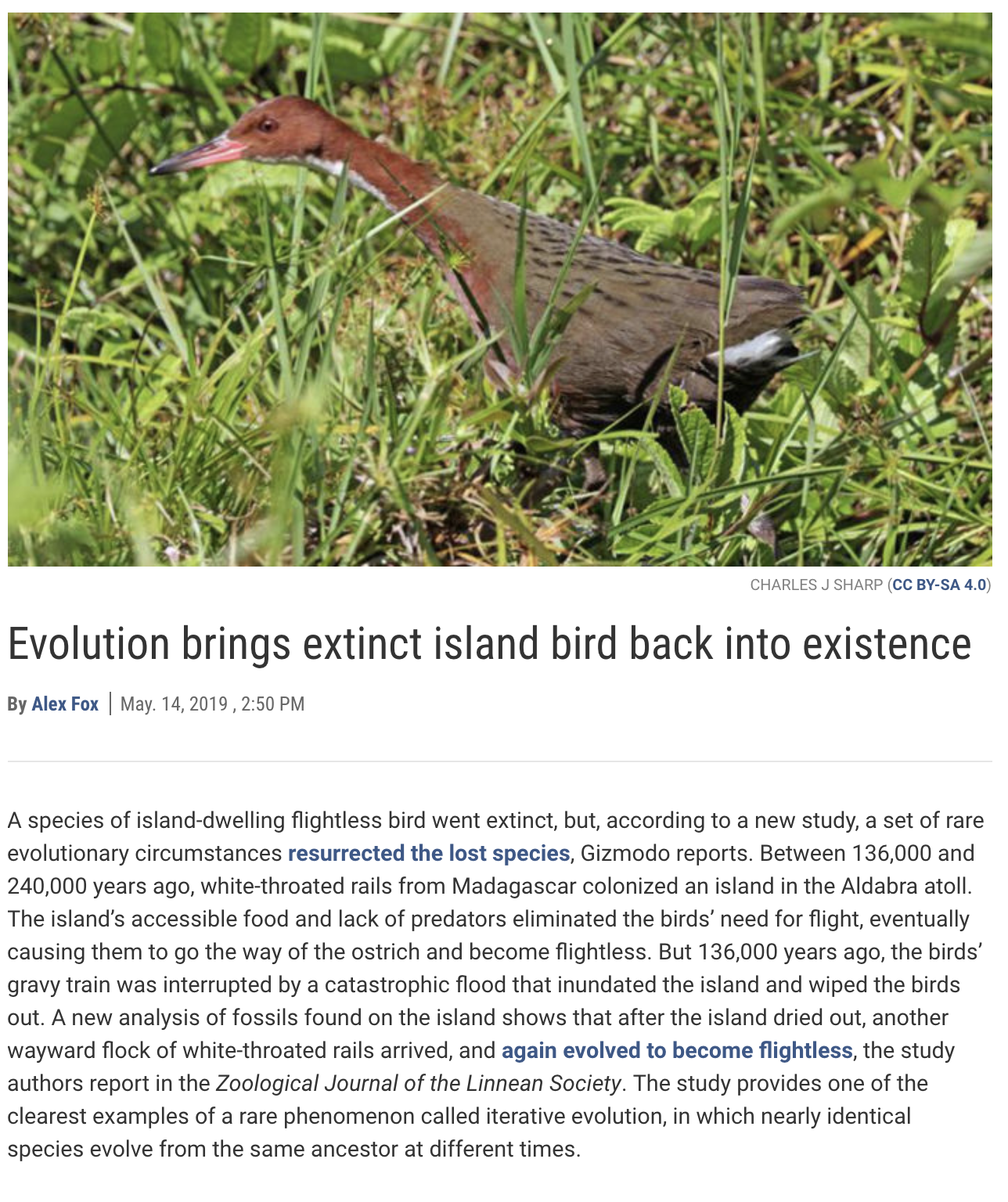 Note that while the report does call this “iterative evolution” (“convergent evolution” would be clearer to evolutionists), and notes the independent evolution of flightlessness, it also passes on Gizmodo’s report that evolution had “resurrected the lost species.”

Nope, that’s not true. We know nothing about the genetics, morphology, behavior, and physiology of the extinct species compared to the new one. Science had no business talking about “resurrection”, but it did.

Of course only a petulant evolutionary biologist who works on speciation would single out this error. But it’s pretty bad when one of the world’s best science journals makes a totally unwarranted claim like this.

35 thoughts on “Railing about rails again: No, Science, it’s NOT THE SAME SPECIES!”