While on the East Coast to attend the Evolution 2019 meetings in Providence, Rhode Island, I also stopped for a few days at the Museum of Comparative Zoology (Jerry’s and my alma mater), and got a chance to visit with Dick Lewontin, Jerry’s Ph.D. advisor, and my de jure Ph.D. advisor (my actual advisor, E. E. Williams, was retired, and so could not officially be my advisor). WEIT readers may recall that Jerry posted greetings for Dick’s 90th birthday earlier this year. I went to see Dick with Steve Orzack, another one of Dick’s Ph.D. students, who took the two pictures below.

We chatted for an hour or two about various things. Steve and I both had some things we wanted to ask Dick about, one of mine being whether Dick’s advisor, Theodosius Dobzhansky, was Russian or Ukrainian. (Wikipedia claims he’s Ukrainian, and I once had a Ukrainian complain to me about an exhibit about Dobzhansky that I curated that referred to him as Russian.) Dick was adamant that Dobzhansky was Russian, noting that he spoke Russian at home with his wife, thought of himself as Russian, and had Russians as his lab assistants and technicians. Historians, friends, and colleagues of “Dodik/Doby” have always called him Russian, so I was not surprised by Dick’s response.

Dick also regaled us with stories of when he worked with Buckminster Fuller on geodesic domes back in the ’50s, when Dick was at North Carolina State. Bucky, he assured us, did not understand the geometry of solids! Dick mentioned that he considered leaving academia to work full time with Fuller, but was now glad he hadn’t, as Fuller’s company went under a few years later. Steve replied that if Dick had joined the company full time, Dick could have saved the company!

Dick has given up essentially all his space at the Museum, and most of his papers (correspondence, etc.) have been taken by the American Philosophical Society, (which also has a considerable trove of Dobzhansky material), and Dick has given his books to the Ernst Mayr Library– the library of the Museum of Comparative Zoology. This is appropriate, as Ernst Mayr, while Director of the MCZ from 1961-1970, engaged in correspondence with Dick on “genetical problems” (Haffer , 2007:265), and pushed for the building of the Museum of Comparative Zoology Laboratories, the MCZ’s lab wing, completed in 1973 (Mayr, 1973), of which Dick’s fly lab was one of the first inhabitants, arriving at Harvard in that opening year. (Dick mentioned that the proximity of the MCZ to his summer place in Vermont, which he’d had to travel to by train from Chicago, was a consideration in moving from the University of Chicago to Harvard.)

Dick’s books are being sorted, and I looked though several of them, finding a number of interesting inscriptions. First, a set of inscriptions from Mayr himself. These show that Mayr was presenting Dick with his books as early as March 1969, prior to Dick’s arrival at Harvard. I’m not sure if discussions involving Dick’s movement to the MCZ had begun this early. 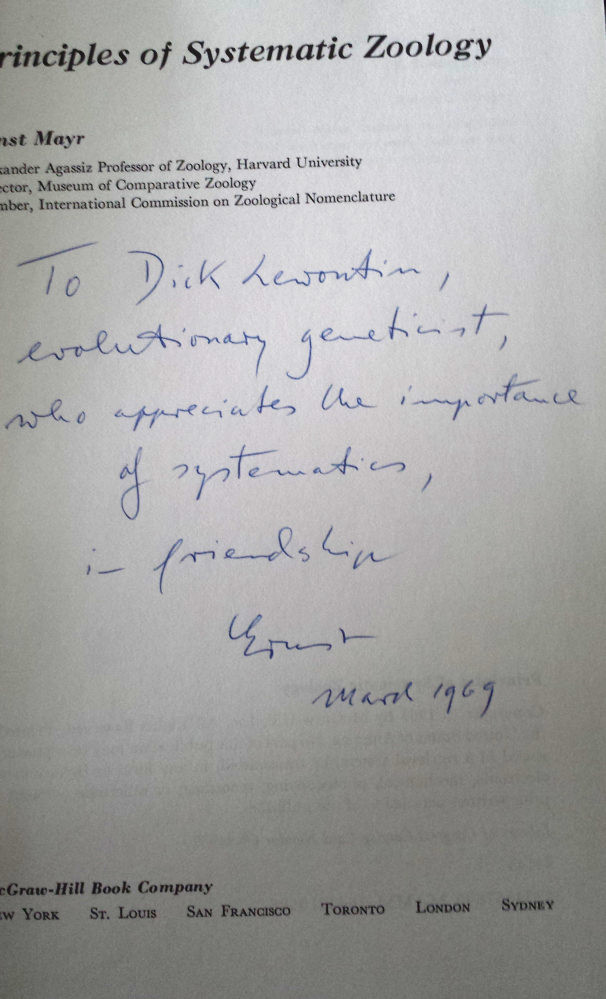 To Dick Lewontin, | evolutionary geneticist, |who appreciates the importance of systematics, | in friendship | Ernst | March 1969

The ISBN stamp on the following cover page (and some further below) are from a cataloging effort in Dick’s personal library, not from the MCZ Library. 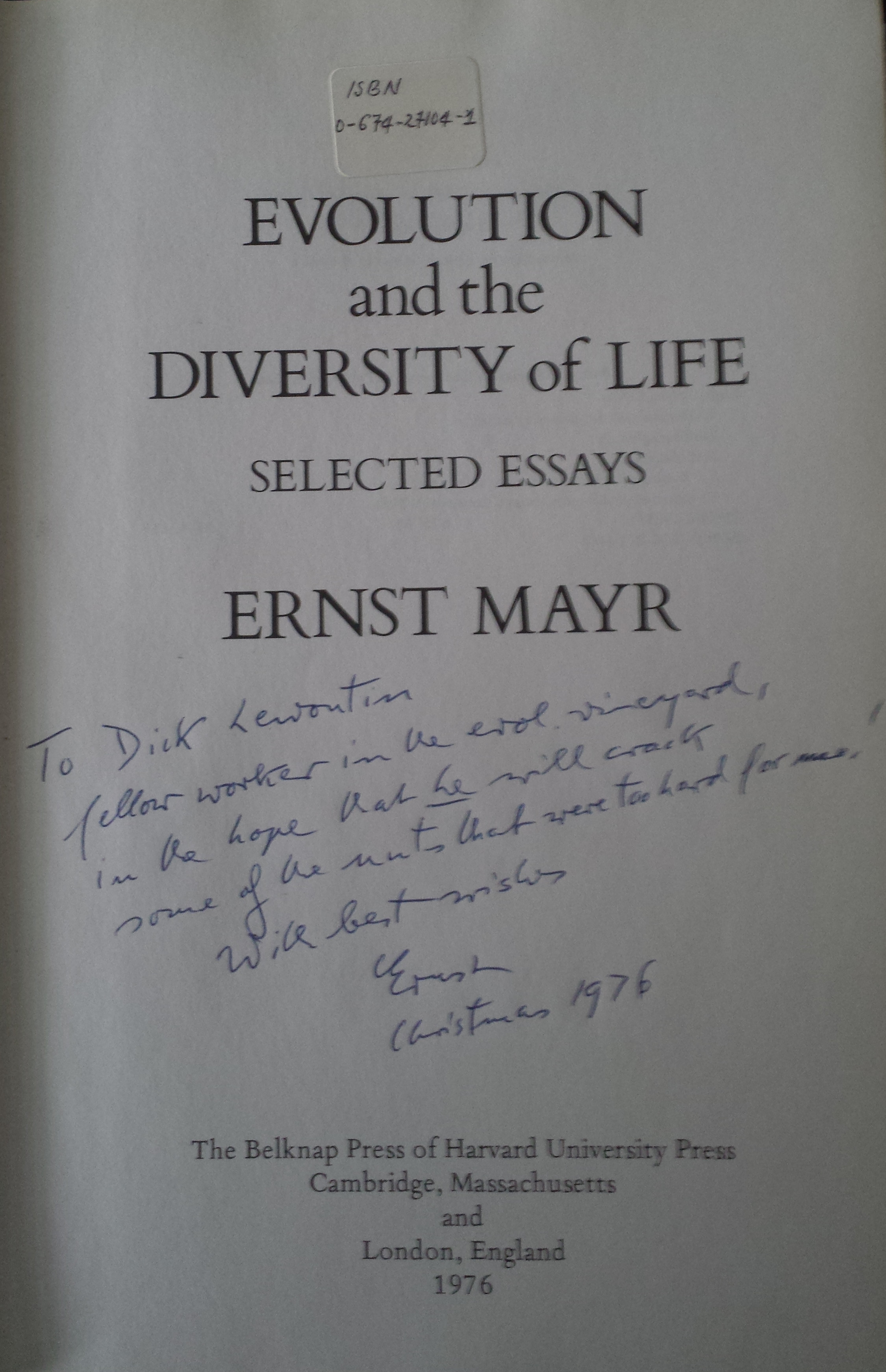 To Dick Lewontin | fellow worker in the evol. vineyard, | in the hope that he will crack | some of the nuts that were too hard for me! | With best wishes | Ernst | Christmas 1976 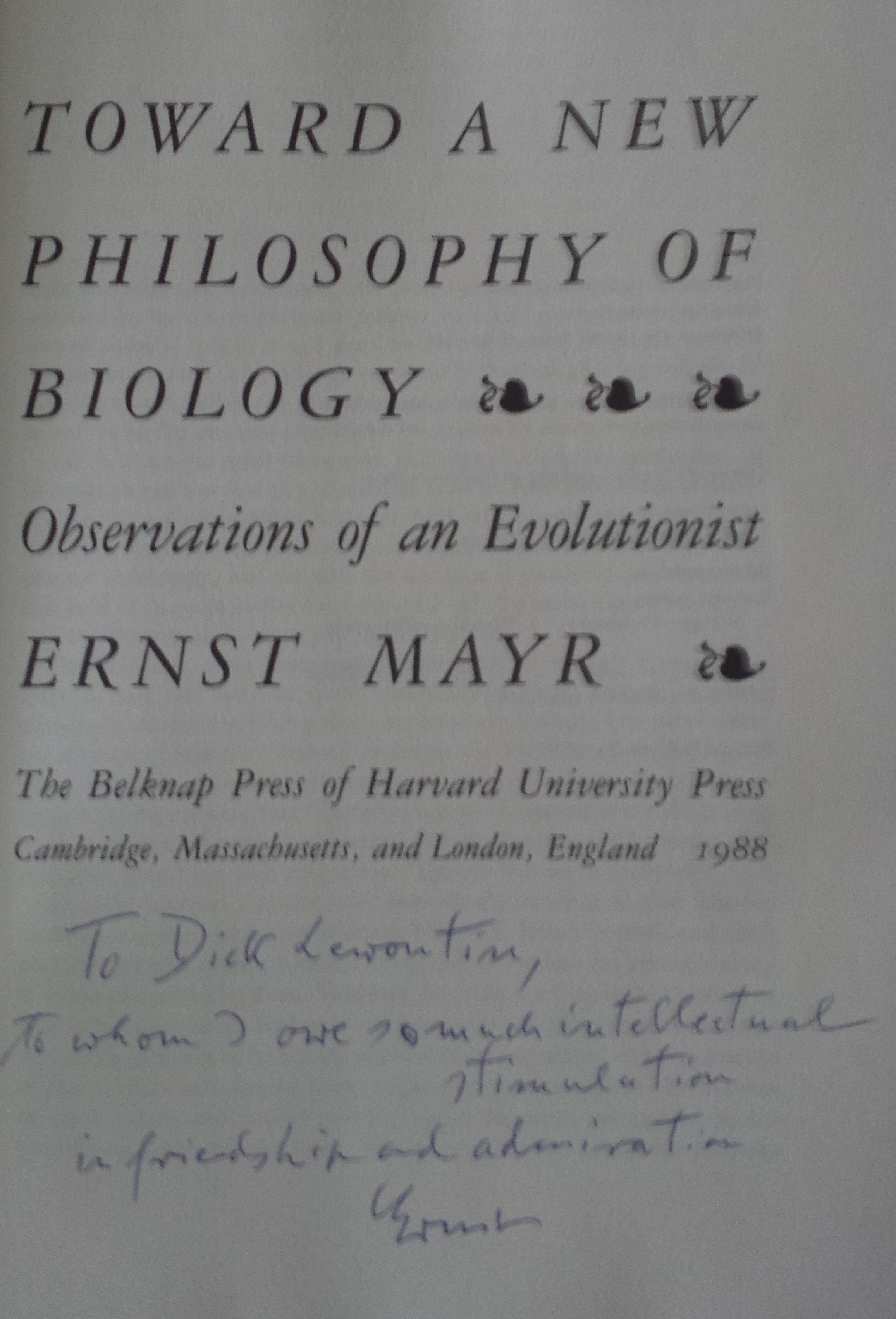 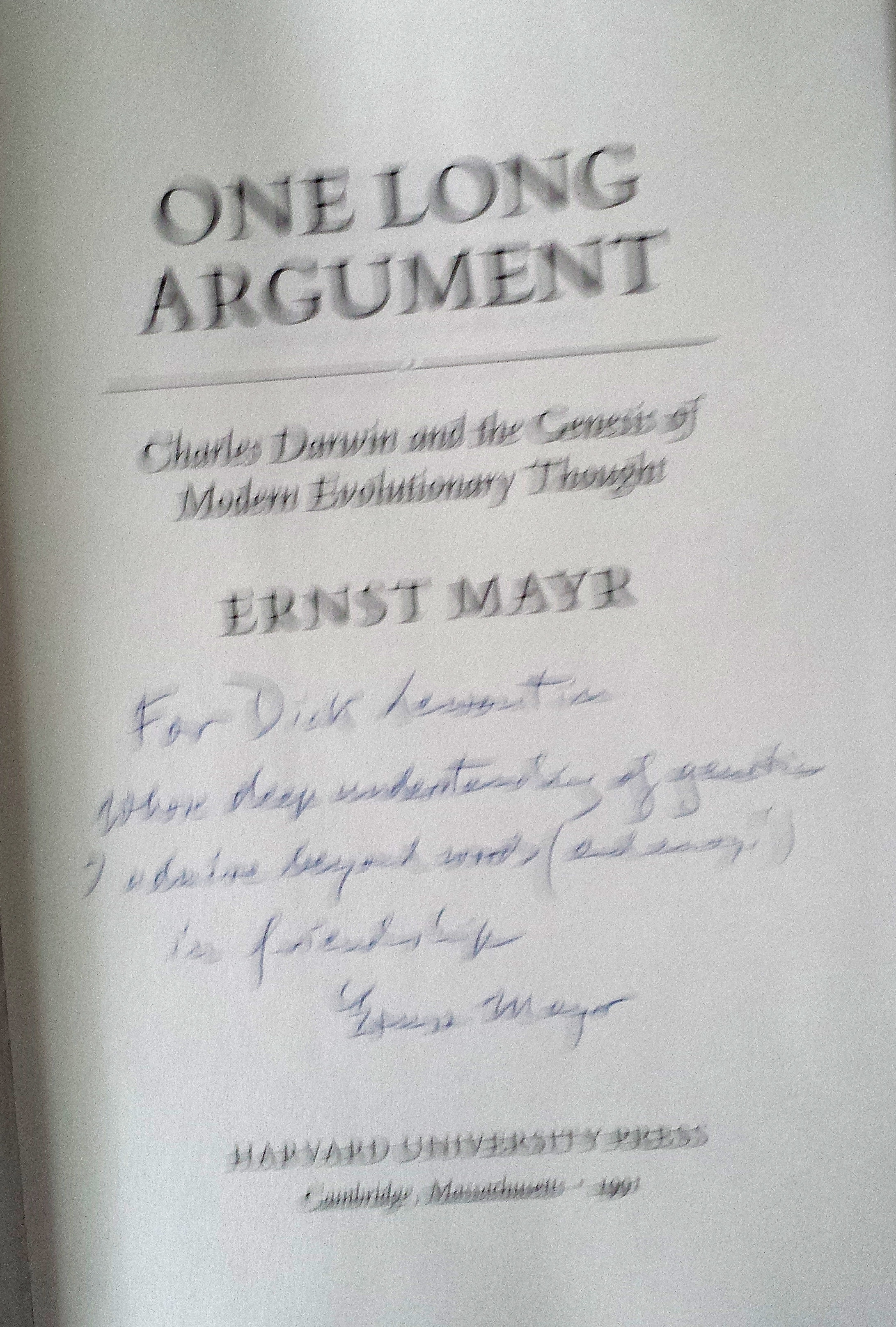 For Dick Lewontin | whose deep understanding of genetics | I admire beyond words (and song!) | in friendship | Ernst Mayr

[I am unsure of my transcription of the final word of the third line, “song”.] 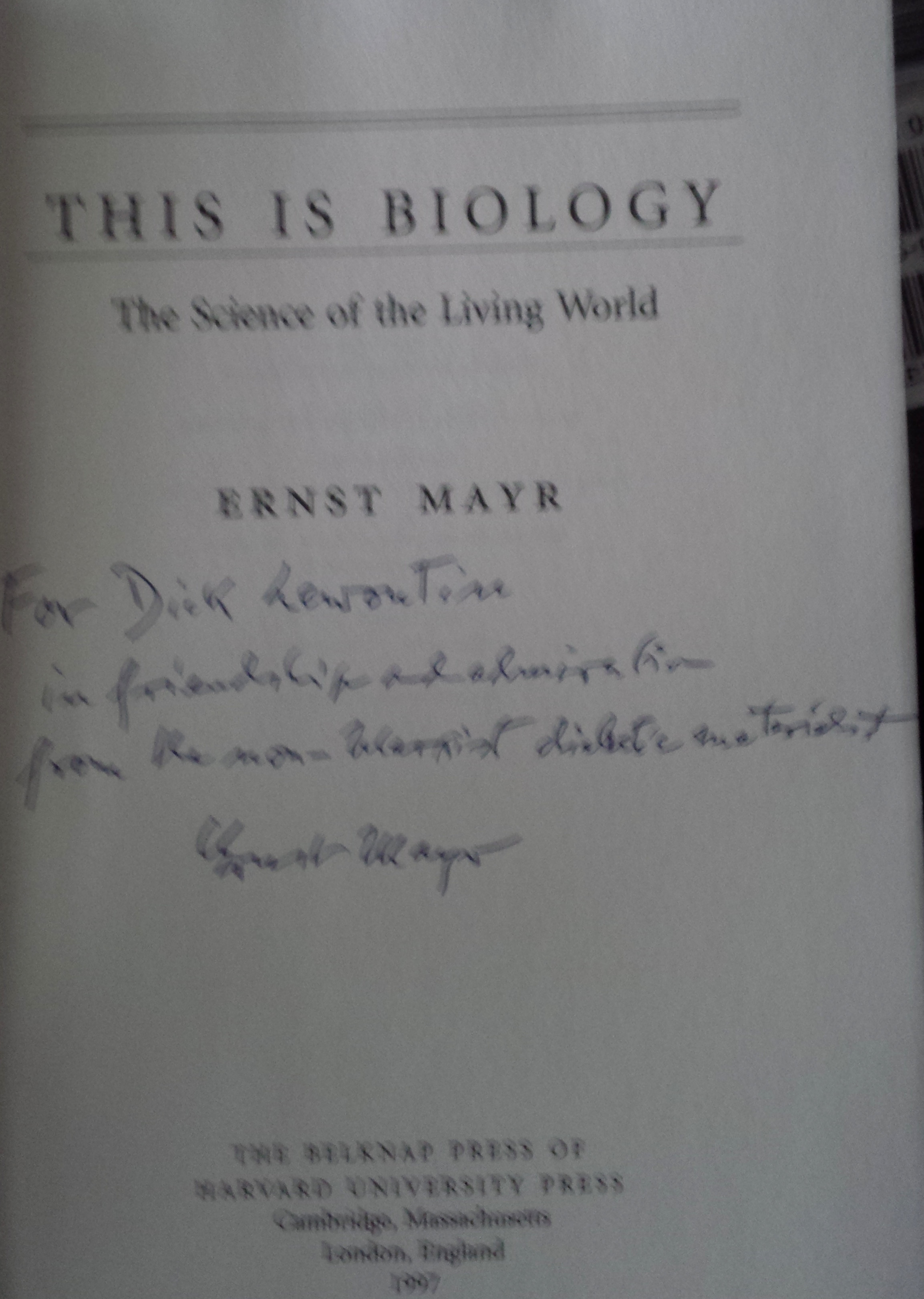 The following is Dick’s MCZ bookstamp, which appears in many, though not all, of his books from his MCZ years.

The following is of interest, coming from Tom Schopf, one of the “young Turks” of paleontology in the early 1970’s, whom I mentioned in my tribute to David Raup. 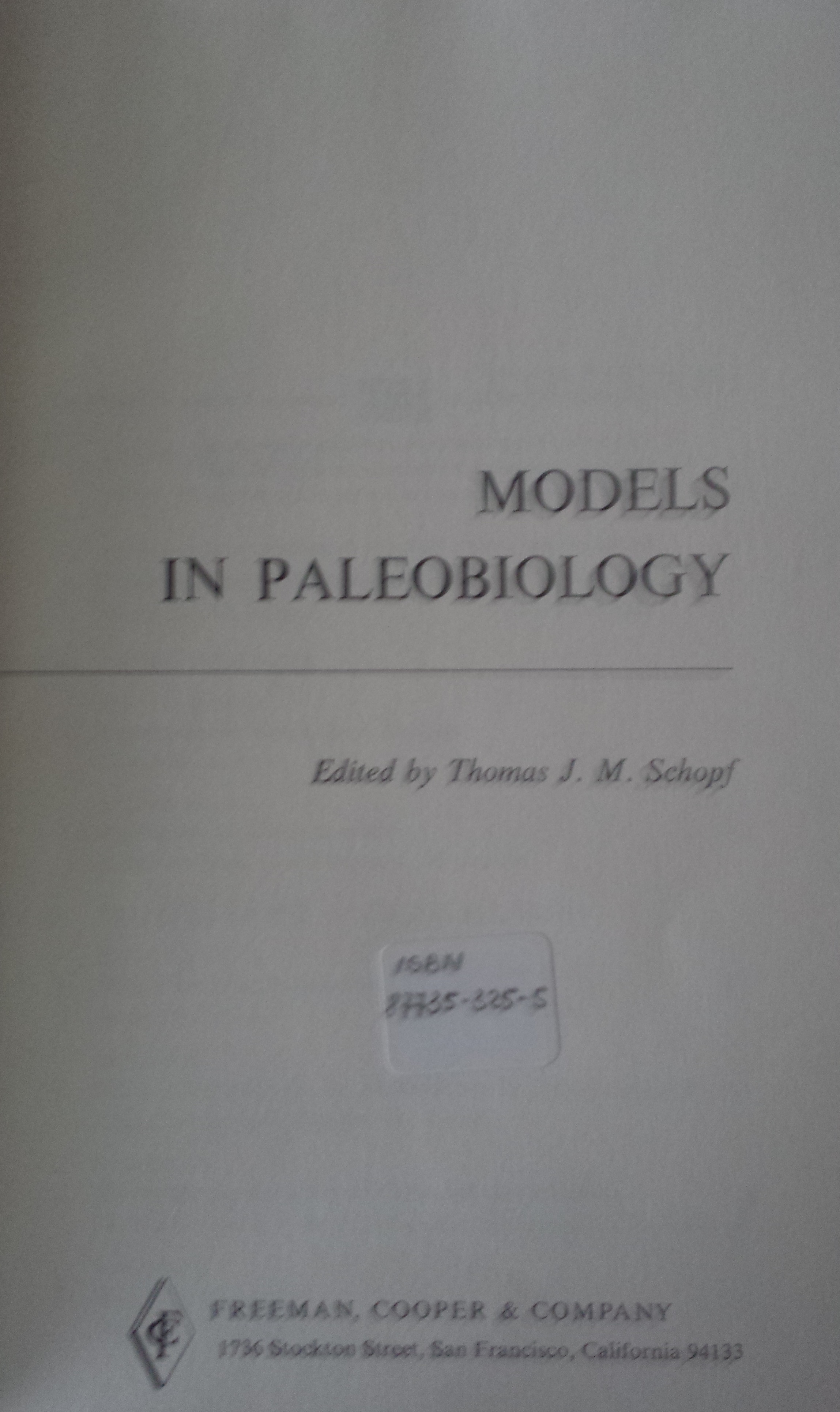 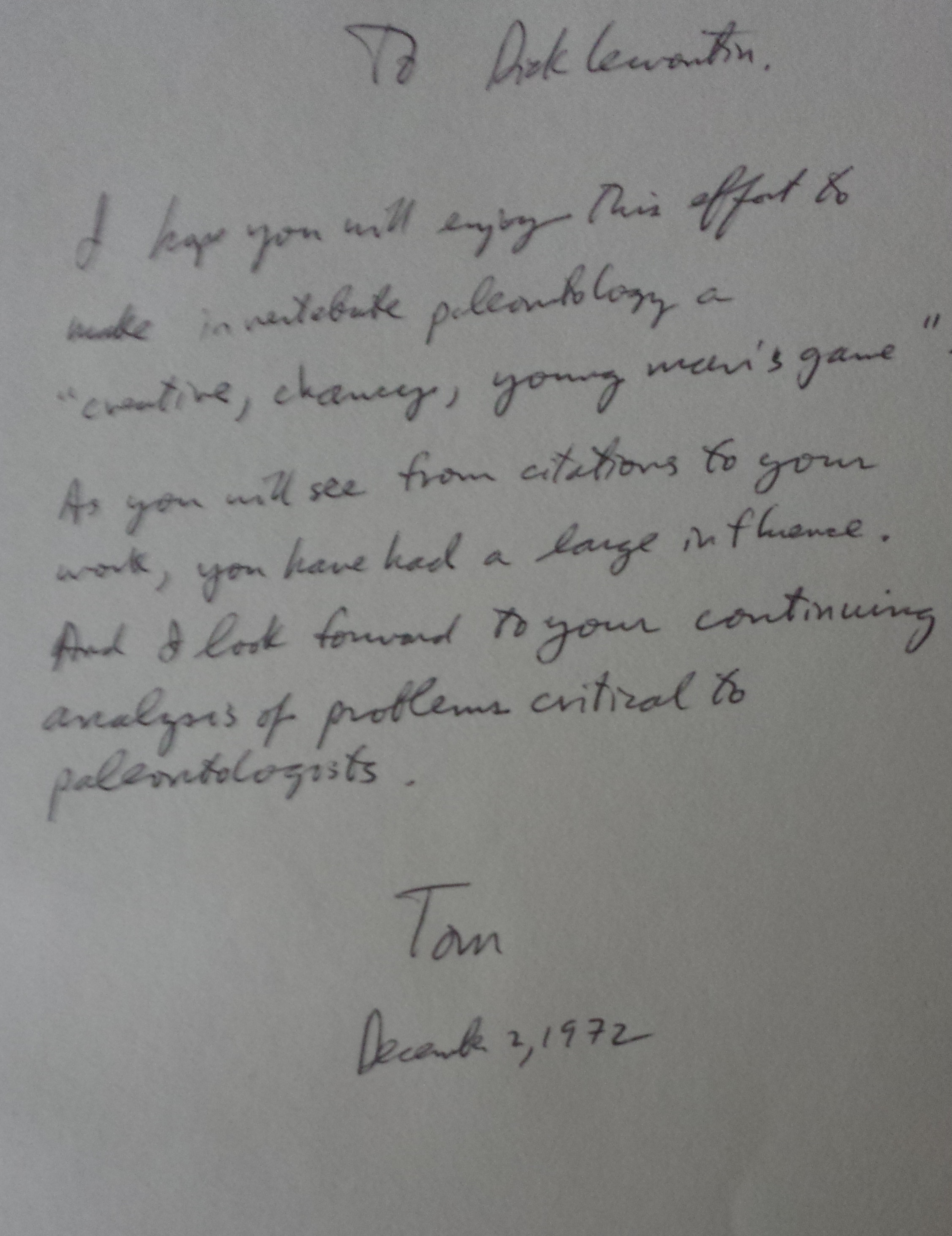 To Dick Lewontin | I hope you will enjoy this effort to make invertebrate paleontology a “creative, chancy young man’s game” | As you will see from citations to your | work, you have had a large influence. | And I look forward to your continuing | analysis of problems critical to paleontologists. | Tom | December 2, 1972

The following is an inscription to Dick from a younger colleague, Jonathan Losos, on his book Lizards in an Evolutionary Tree. Note that Dick had been Jonathan’s intro bio professor! 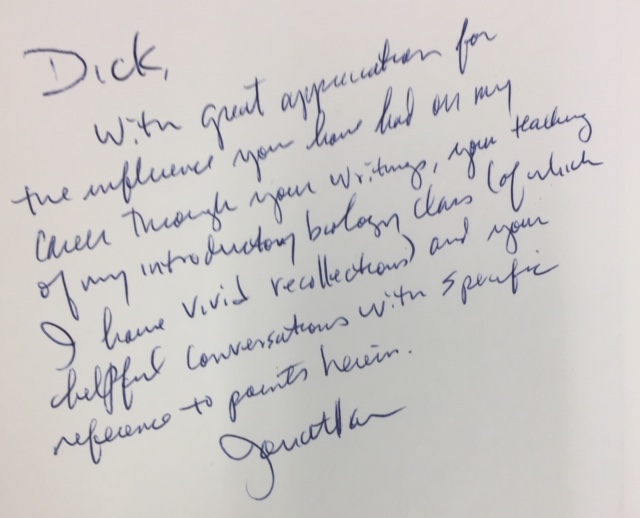 Dick, | With great appreciation for the influence you have had on my | career through your writings, your teaching | of my introductory biology class) of which | I have vivid recollections) and your | helpful conversations with specific | reference to points herein. | Jonathan

And finally, some inscriptions from Dick’s Ph.D. advisor, Theodosius Dobzhansky. These I got from Dick several years ago, when I visited him while preparing my exhibit on Dobzhansky. I used all three inscriptions in the exhibit. The first is on a copy of the third edition of Dobzhansky’s classic Genetics and the Origin of Species. It was published in 1951, which is about the time Dick went to Columbia to work with Dodik. (Dick was in the Harvard class of 1950, but since he had been “rusticated” for a year, he actually graduated in 1951.) The inscription isn’t dated, but it seems to be earlier than the other two, referring to Dick’s “scientific youth”, and his “coming” eminence. According to Dick, Dodik referred to finishing graduate students as “soon to be professor” (as did Dick himself), so this inscription is probably early in Dick’s grad school days. 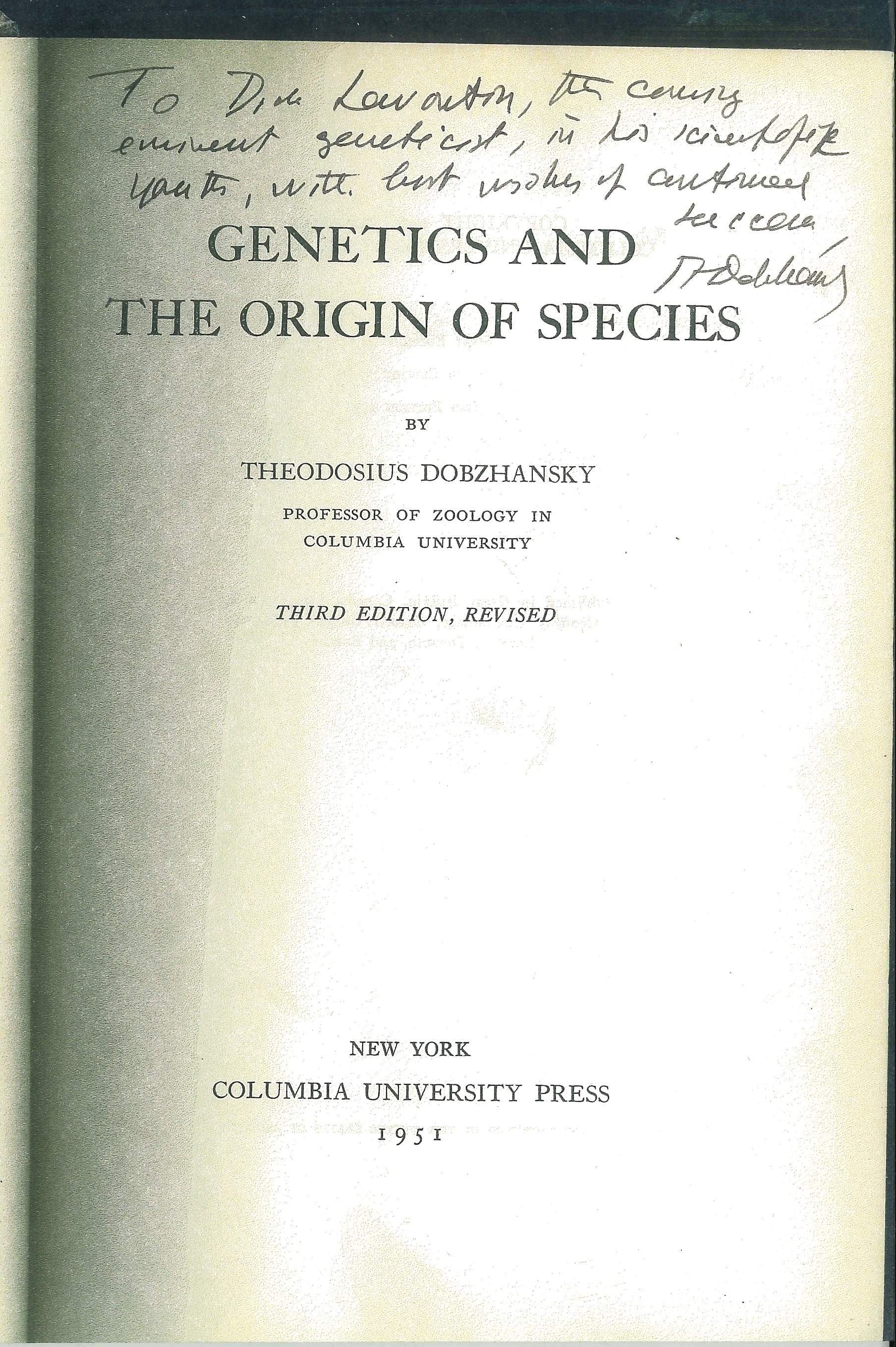 To Dick Lewontin, the coming | eminent geneticist, in his scientific | youth, with best wishes of continued | success | Th Dobzhansky

The next inscription is on a bound set of numbers I to XX of Dobzhansky’s monumental series of paper on “The Genetics of Natural Populations”. These 20 papers were published from 1938 through 1952. It is interesting that Dodik refers to the greater success of succeeding generations; the inscription was made only 5 years before Dick published his groundbreaking papers with Jack Hubby on allozyme polymorphism, confirming Dodik’s long-argued view that genetic variation was abundant and “normal” in natural populations. 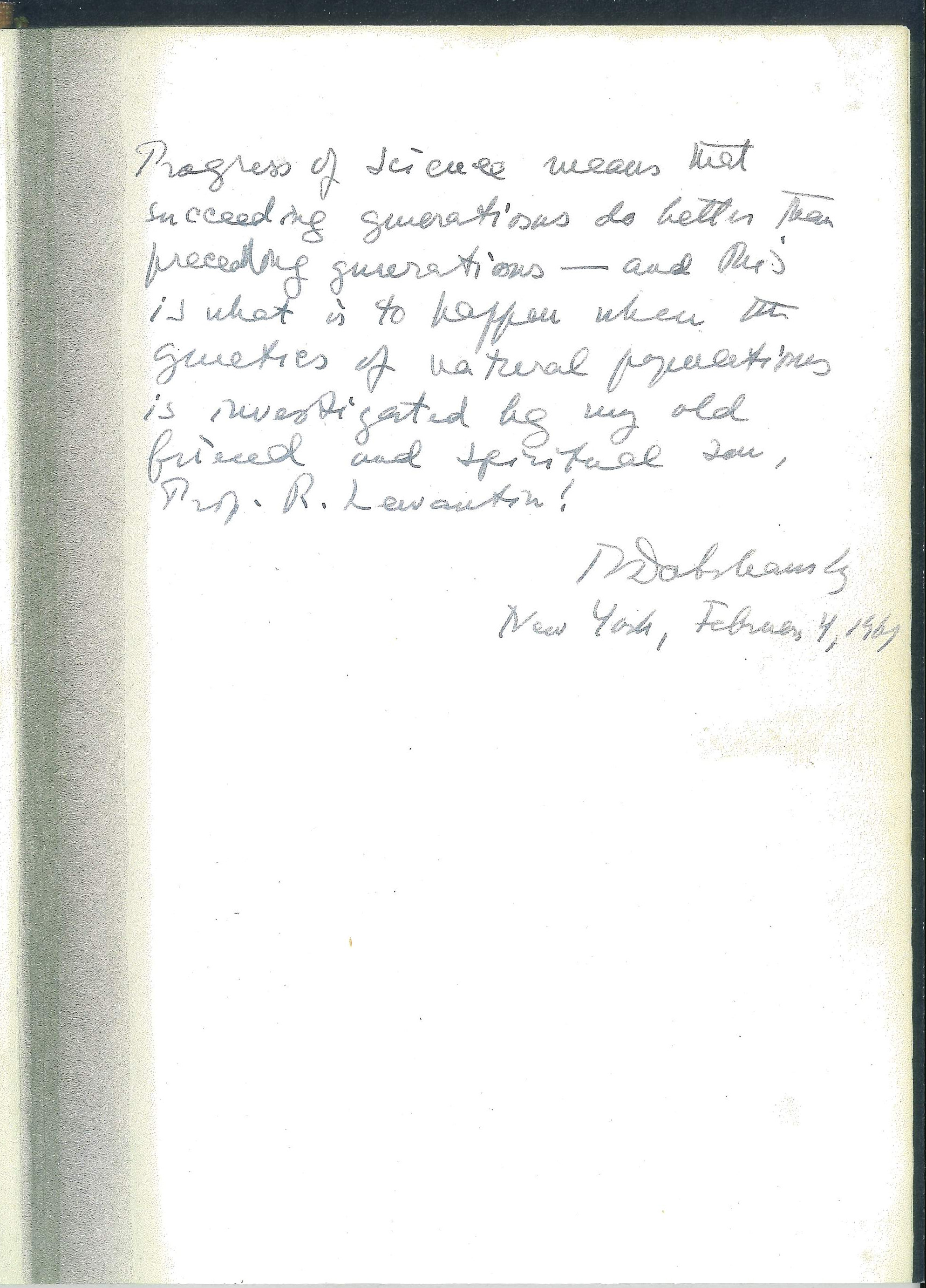 Progress of science means that | succeeding generations do better than | preceding generations— and this | is what is to happen when the | genetics of natural populations | is investigated by my old | friend and spiritual son, | Prof. R. Lewontin! | Th Dobzhansky | New York, February 4, 1961

The final inscription is on a bound set of numbers XXI-XL of “The Genetics of Natural Populations”, published from 1953 through 1968. This inscription is undated but necessarily postdates initial Dick’s work on allozymes. There were three more papers in the series to come, published from 1969 through 1976; for the last, Dobzhansky was a posthumous coauthor, having died in December,1975. (The notation “GNP | XXI-XL” was made by me on the copy I made, and is not on the original.) 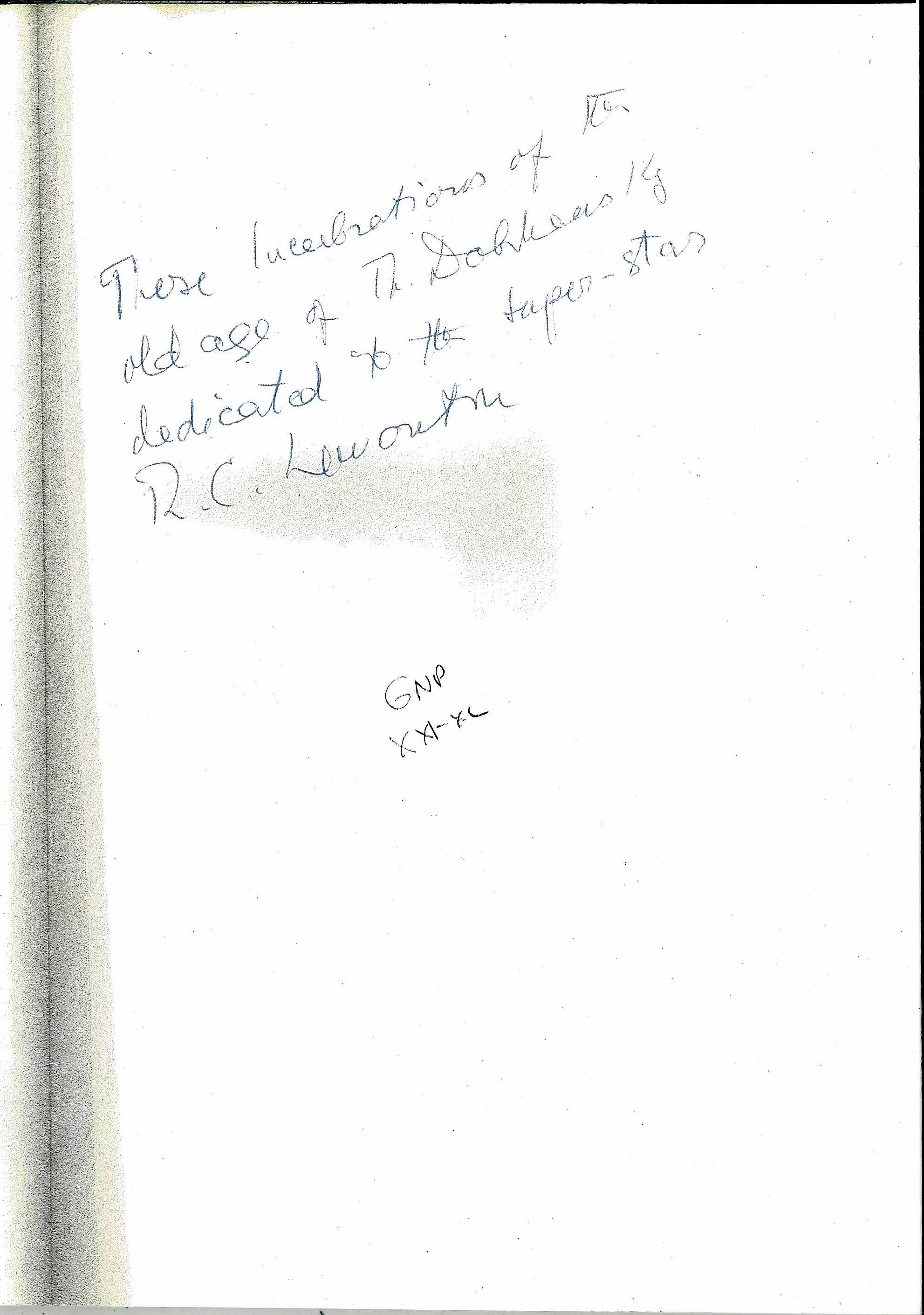 These lucubrations of the | old age of Th. Dobzhansky | dedicated to the super-star | R.C. Lewontin

You can see in these inscriptions the development of Dobzhansky’s appreciation of Dick as a scientist, from promising “youth”, to “old friend and spiritual son” (Dobzahnsky had one child, a daughter), and finally to “super-star”. You can also see Dodik’s colloquial phrasing and sense of humor, also evident in his  aphorism, “Heaven is where, when the experiment is over, you don’t need statistics to figure out what happened.” (Which Dick reconfirmed, on my latest visit, was indeed Dodik’s.)

Hubby, J. L., and R. C. Lewontin. 1966. A molecular approach to the study of genic heterozygosity in natural populations. I. The number of alleles at different loci in Drosophila pseudoobscura. Genetics 54:577-594.

Mayr, E. 1997. This is Biology: the Science of the Living World. Harvard University Press, Cambridge, Mass.

22 thoughts on “A visit with Dick Lewontin”