I learned of Dick Lewontin’s death only Thursday morning— I had been traveling for several days with little internet access. When I checked my email upon my return, I found a message from a colleague on some other matter, and appended to his message were his condolences and an appreciation of Dick’s legacy. I knew of course what this meant, and I immediately went to WEIT, knowing Jerry would have posted a memorial.

Jerry, of course, had been Dick’s Ph.D. student, and knew him very well. I heartily commend Jerry’s memorial to Dick: I learned from it, and in all those things of which I have personal knowledge, it is true in fact and sound in judgment.

Dick, as I have mentioned before here at WEIT, was my de jure Ph.D. advisor. The person who actually advised my thesis work—my de facto adviser—was the great herpetologist Ernest E. Williams. When I was looking at graduate schools to apply to, my undergraduate advisor, Doug Futuyma, recommended working with Ernest as a possibility, and I made a visit to the Museum of Comparative Zoology in the winter of 1979. Ernest was nearing Harvard’s then mandatory retirement age, and so I would need someone to act as my official advisor after his retirement. I think it was Doug who suggested or set it up, and so I met with Dick on my visit, and he readily and generously agreed to serve as my advisor once Ernest retired.

This arrangement reflected a close relationship between the students and postdocs in the departments of population genetics and herpetology within the MCZ, one which both Dick and Ernest supported, though, as usual for faculty at Harvard, they rarely spoke to one another directly. This relationship was both social and intellectual. Jerry (as has been recounted at WEIT) was close friends with and had done tropical field work with Ken Miyata, one of Ernest’s students, and Russ Lande, another of Dick’s students had undertaken an empirical study in the herp collection with Ernest’s assistance of patterns of limb loss in lizards to complement his theoretical studies of phenotypic evolution. I joined this intellectual/social circle, so that even before Ernest retired I was an “associate” member of the Lewontin lab; and Dick’s student Ken Weber and I even worked together in Dick’s lab on one of Ken’s systems of mass selection in flies. After Ernest retired, Dick would sign whatever forms needed signing by my advisor (although if only initials were needed, Dick’s student Lisa Brooks sometimes did it, since she had perfected Dick’s initials and been delegated the task), while my base of operations remained in herpetology.

But Dick and I would discuss my thesis topic. The Anolis lizards which I studied are exquisite examples of adaptive radiation and convergent evolution, and thus not right up the alley of one of the chief critics of the “adaptationist program”. When I told Dick that I could predict the ecology and morphology of the next species of anole to evolve on the island of Jamaica, he didn’t quite wince, but he challenged the notion of pre-existing niches; he argued for “niche construction”, the idea that ecological niches are the result of a contingent interaction of organism and environment, and that the environment does not present problems to be solved. There was much merit in Dick’s view—whales didn’t evolve flippers after some even-toed hoofed mammals were stranded at sea— but we still differed. Now I would refine my predictions of anole evolution a bit, but still basically stand by them.

I also did some multivariate statistics for my thesis, using a computer in Dick’s lab (set up, in part, by one of Ernest’s students, Kurt Fristrup). Dick was dubious about much of multivariate statistics—dismissing the results as “reifications”—and he was a statistical adept; I was fortunate to learn of the power of the analysis of variance from Robert Sokal, and of its limitations from Dick. Dick lamented, in a bemused way, the computer and its ability to let me run analyses quickly as merely enabling the rapid production of conceptual confusions. It is to Dick’s credit that even though some of what I did ran counter to his own inclinations, he put what facilities he had at my disposal, stood up for me during an ugly biology department power play, and provided unintrusive support throughout.

In addition to being a good advisor, I think Dick was the smartest guy I ever met. I once attended with my infant daughter one of the regular Population Biology Seminars which Dick hosted, taking a seat in the back where I could make a quick exit if necessary. To my mortification, Dick came and picked up my daughter, carried her to near the front of the room, and played with her throughout the visitor’s seminar. When it came time for discussion, Dick’s opening question showed that, far from being distracted, he had taken in everything said, understood it, and penetrated to the heart of the matter. On another occasion, Dick once visited a former MCZ student, Bob O’Hara, and Bob was explaining some things he was working on to Dick. Bob reported to me that, in five minutes, Dick understood his ideas more clearly than Bob himself did after six months of thinking about them.

Jerry has commented on the relationship of Dick with Ed Wilson, who were once both part of a group known as the “Marlboro Circle” which sought to conceptually unify ecology and evolutionary biology, but the two later split dramatically over Wilson’s sociobiology. The general consensus is that they never spoke with one another after that. (Natalie Anger avers otherwise). My final act as a graduate student, in winter of 1989, was to bring Dick and and Ed together into the same room.

Almost every Monday at noon the Population Biology Seminar was held in the central meeting area on Dick’s 3rd floor of the MCZ Labs, with attendees gathered around the great table that he had procured for the purpose of bringing people together. The speakers could be local, or visiting luminaries from far and wide. It was there that the public defense of my thesis was held. I titled my defense talk “A theory of island biogeography, with especial reference to the amphibians and reptiles of the West Indies”. This was a deliberate mashup of the title of Wilson’s famous book with Robert MacArthur, The Theory of Island Biogeography, and the title of a monograph from 1914 by Thomas Barbour, an earlier curator of herpetology at the MCZ, “A contribution to the zoogeography of the West Indies, with especial reference to amphibians and reptiles“. The topic of my thesis was much closer to Ed’s interests than to Dick’s; I argued in my talk that MacArthur and Wilson’s equilibrium theory of island biogeography was a special case of a more general theory, and that theirs didn’t apply very well to West Indian amphibians and reptiles.

I made sure, by not just posting the seminar announcement in the usual places, but by placing a copy in his mailbox, that Ed knew about it. (We had had little contact, despite our similar interests.) He did come, and sat at the middle of one side of the great table; Dick was further back in the room. After my talk, among the questions were one or two from Ed. He defended the applicability of his and MacArthur’s theory to broader situations than the ones where it fit best, and, in fairness, one of the virtues of their theory is that they anticipated modifications, expansions, and refinements that would improve it; that’s why I had said there was a more general theory of which theirs could be a special case. After the questions, Ed left; I didn’t see him talk to Dick, but they were in the same room talking in public about the same thing, at least briefly.

The one point of Jerry’s assessment with which I might quibble is whether Dick’s writing could be “caustic”. It could be a matter of definition, but Dick’s criticism could be biting and withering, and his book reviews, in particular, were displays of rhetorical virtuosity and erudition. When he reviewed Charles J. Lumsden and Ed Wilson’s Genes, Mind, and Culture in 1983, he originally titled his review “No genes, no mind, no culture”, a sentiment clearly expressed in the review itself. The editors of The Sciences (a NY Academy of Science publication) thought that title too harsh, and it was changed to “Sleight of hand” in the published version, though this seemed scarcely less harsh. (That this was Dick’s intended title we knew at the time in the lab, and it is documented by Philip Kitcher‘s citation of the phrase as being from the review in his critique of sociobiology, Vaulting Ambition; and by the fact that the phrase is given as the title of the review in John Maynard Smith‘s papers in the British Library [Western Manuscripts Add MS 86661, p. 68 of the catalog of JMS papers]. The phrase does not occur in the published review; Kitcher and Maynard Smith had evidently been in possession of pre-publication drafts.)

And as a final example, Dick’s review in the NYRB of some books by a bunch of sociologists about sexual behavior, “Sex, lies, and social science” is a classic of rhetorical and logical take down. In it, he reached a higher realm of criticism to which few have aspired, let alone reached (Peter Medawar being one of those few). His accompanying exchange with the authors, which is available at the link in its entirety, is not to be missed. This brief excerpt gives some of the flavor:

The Yellow Kid, who made a living from fleecing the gullible, used to say that anyone who could not con a banker ought to go into another line of work. Maybe, but before giving up, they should try professors of sociology.

Over the last some years I’d visited Dick several times, usually in company with another of Dick’s students, Steve Orzack; and Dick provided me with materials for an exhibit at my campus library that I curated on Dick’s own graduate advisor, Theodosius Dobzhansky. My last visit was in 2019, and it seemed that Dick’s vigor, as was inevitable, was declining.  Ernst Mayr, who as director of the MCZ had much to do with bringing Dick to the MCZ in 1973, rose at the end of his 100th birthday party and symposium, and told the assembled family, friends, students and colleagues, “I’ve had a good life”. Dick could say that as well.

JAC: I added this photo of Dick: 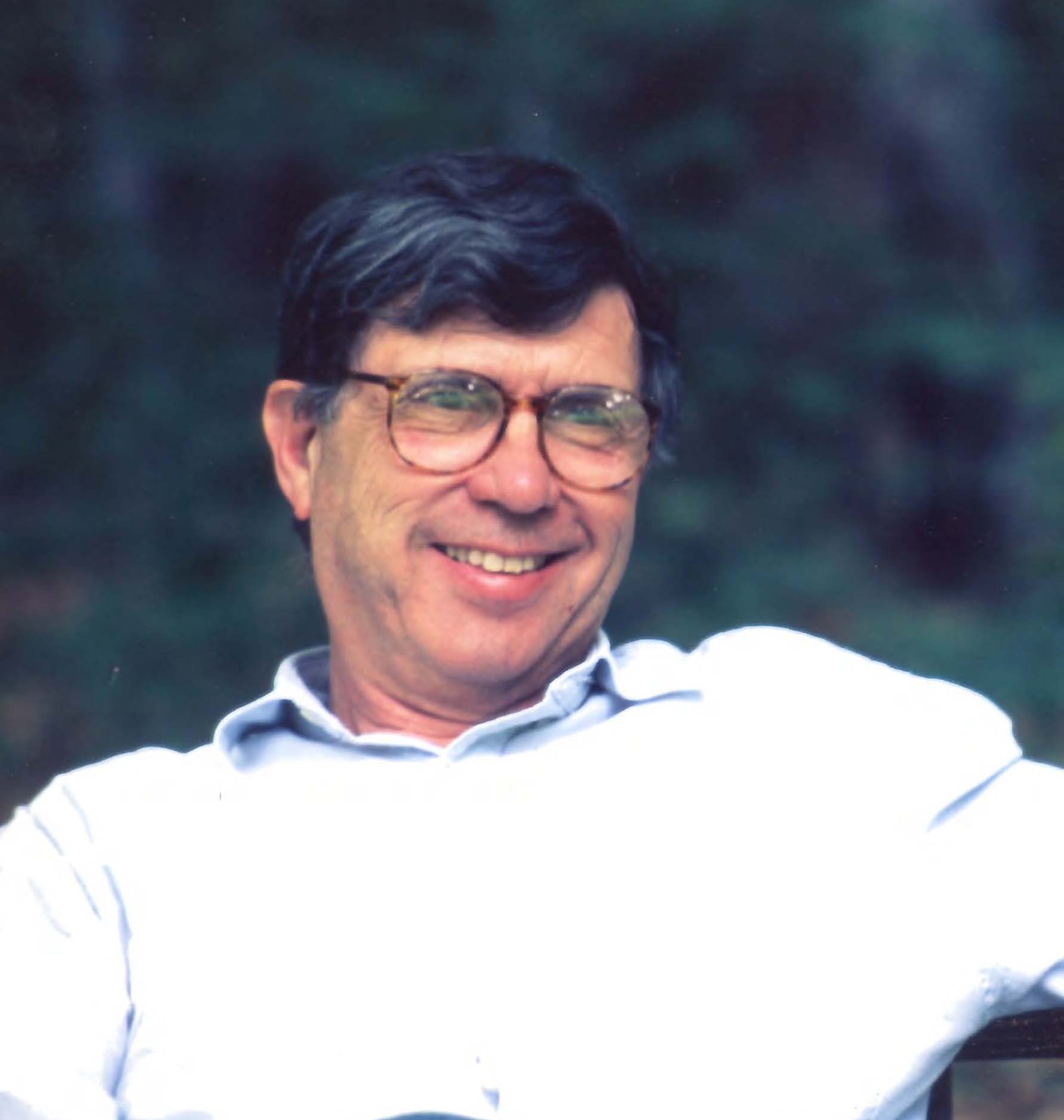