As the end of my life comes closer, though with the same speed that the end of everyone’s life comes closer, I realize that I’m OLD and don’t have many good years left. This makes me think a lot about whether there is anything desirable about dying. Well, maybe if you’re intolerably ill or in pain, but otherwise I can think of nothing desirable about being an ex-Coyne. The only consolation is that I’ll be gone and won’t know it.

A while back I took a survey of readers’ opinions, asking them what they’d decide if they had a chance to be immortal, living in decent health. Surprisingly, most did not; they thought they’d get bored or that global warming would happen and they’d die anyway, or stuff like that. Barring an apocalypse, though, I don’t see a problem with immortality. If nothing else, you can remain eternally curious about “what will happen next.” And something always does. And there are all those books to read, and more to be written!

But lately I’ve had darker thoughts, mostly revolving around what is happening to my beloved Left. Every day I read—and post—about the insanity that the Left is falling prey to, and about the fear of decent, sane people to speak up against the madness. And so I think, “Well, maybe I don’t want to be around when the ‘progressive’ Left morphs into the society described in Nineteen Eighty-Four. I don’t want to be subject to my own side being intolerably authoritarian. I don’t want to be afraid to say what I think without fear that the mob will come to ruin my life. And I am baffled by the degree of insanity promulgated by many on the Left. It’s not all Critical Race Theory (though that’s a part of it), but mostly just a sense that many of my fellow leftists have lost their bearings—and their marbles.

Andrew Sullivan feels the same way (though not about death), mourning what’s happened to the Left in his latest Substack column (click on screenshot below to read it). 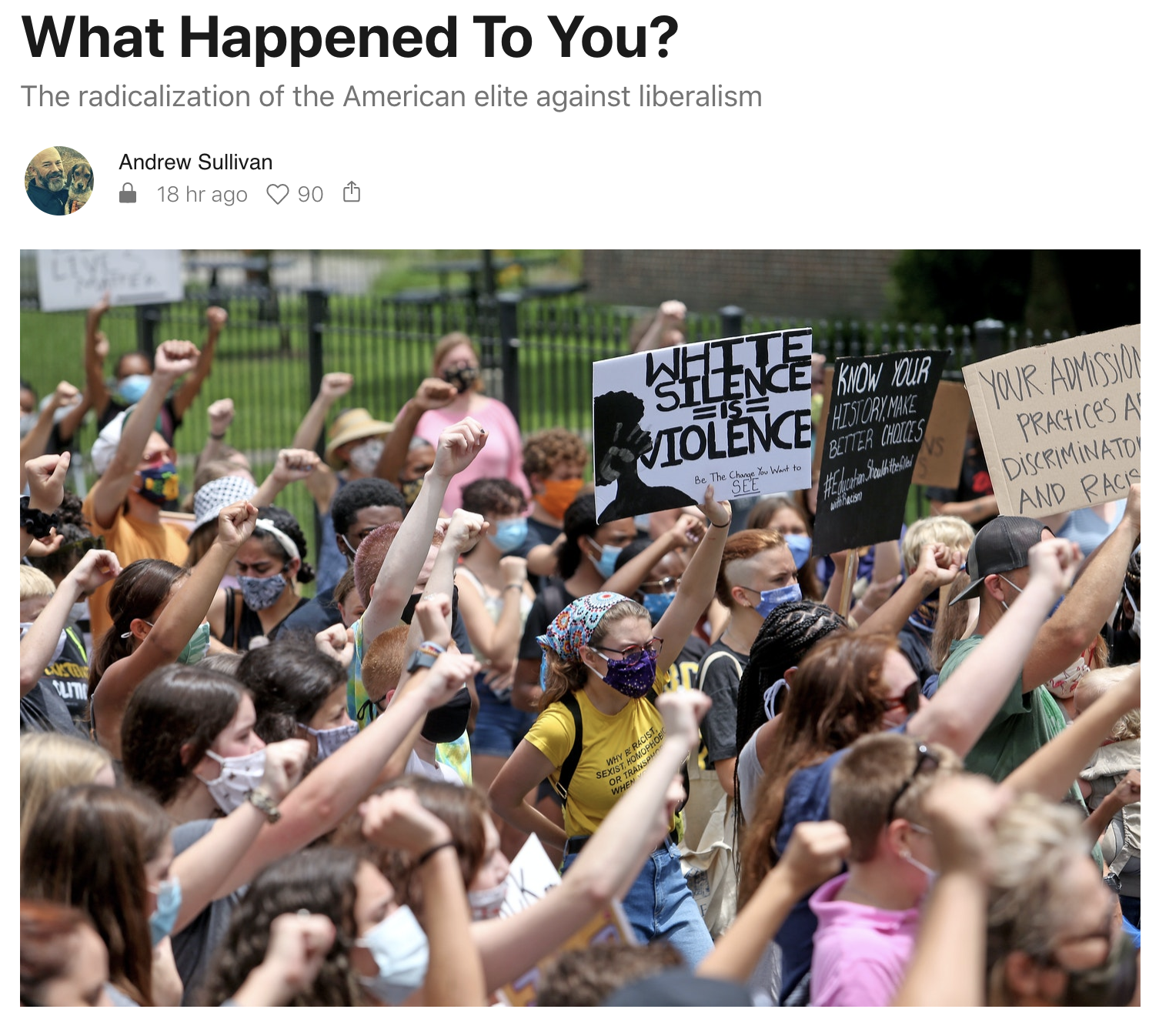 Sullivan gets a lot of flak from his readers about his obsession with CRT, but his plaint is wider: the spread of illiberalism among liberals. So, as in the title, when readers accuse him of having changed, of having moved so far to the Right (singling out his “obsession” with CRT), his response is: The real question is “What happened to you?” While he recognized that the “progressive Left” has some good points, as does CRT, this is what he singles out:

Take a big step back. Observe what has happened in our discourse since around 2015. Forget CRT for a moment and ask yourself: is nothing going on here but Republican propaganda and guile? Can you not see that the Republicans may be acting, but they are also reacting — reacting against something that is right in front of our noses?

What is it? It is, I’d argue, the sudden, rapid, stunning shift in the belief system of the American elites. It has sent the whole society into a profound cultural dislocation. It is, in essence, an ongoing moral panic against the specter of “white supremacy,” which is now bizarrely regarded as an accurate description of the largest, freest, most successful multiracial democracy in human history.

We all know it’s happened. The elites, increasingly sequestered within one political party and one media monoculture, educated by colleges and private schools that have become hermetically sealed against any non-left dissent, have had a “social justice reckoning” these past few years. And they have been ideologically transformed, with countless cascading consequences.

And so we have this:

Look how far the left’s war on liberalism has gone.

Due process? If you’re a male on campus, gone. Privacy? Stripped away — by anonymous rape accusations, exposure of private emails, violence against people’s private homes, screaming at folks in restaurants, sordid exposés of sexual encounters, eagerly published by woke mags. Non-violence? Exceptions are available if you want to “punch a fascist.” Free speech? Only if you don’t mind being fired and ostracized as a righteous consequence. Free association? You’ve got to be kidding. Religious freedom? Illegitimate bigotry. Equality? Only group equity counts now, and individuals of the wrong identity can and must be discriminated against. Color-blindness? Another word for racism. Mercy? Not for oppressors. Intent? Irrelevant. Objectivity? A racist lie. Science? A manifestation of white supremacy. Biological sex? Replaced by socially constructed gender so that women have penises and men have periods. The rule of law? Not for migrants or looters. Borders? Racist. Viewpoint diversity? A form of violence against the oppressed.

Now I don’t agree with Sullivan on everything—his weakness for religion and views on abortion are two—but more and more he’s sounding not like an alt-righter but a moderate Democrat.  He warns, and I’m with him here, that if this keeps up, the GOP may come roaring back in 2022, and where will we be then? A lot worse than we are now! Either way, Nineteen Eighty-Four is just down the pike.

I still think Trump is effectively gone as a potential President, but the people who agree with his despotism and idiocy still comprise nearly half of Americans. When a third of us adamantly refuse to get the COVID vaccination out of sheer ignorance or stubbornness, then we’re cooked.

You can read Sullivan’s column for yourself, but in a few places Sullivan quotes Obama, and those quotes, uttered today, would make Obama a target of the Left. Here are a few of them (Sullivan’s words are indented, Obama’s indented even more):

At the moment, I’m recording an audiobook for a new collection of my writing, from 1989 – 2021, “Out On A Limb,” to be published next month. (More to come on that next week.) It covers the Obama years, including my impression in May 2007 that he’d be the next president and why I found him so appealing a figure. It’s been a shocking reminder of how our politics has been transformed since then:

How much further can you get from the ideology of the 1619 Project — that rejects any notion of white contributions to black freedom? In his Jeremiah Wright speech, the best of his career, this is what Obama said of Wright’s CRT-inspired words, damning America:

They expressed a profoundly distorted view of this country — a view that sees white racism as endemic, and that elevates what is wrong with America above
all that we know is right with America… The profound mistake of Reverend Wright’s sermons is not that he spoke about racism in our society. It’s that he spoke as if our society was static; as if no progress has been made; as if this country — a country that has made it possible for one of his own members to run for the highest office in the land and build a coalition of white and black; Latino and Asian, rich and poor, young and old — is still irrevocably bound to a tragic past.

This is what I still believe. Do you?

And though it will earn me my own flak, I have to say that I think America is still a great country. Of course we have problems but we are not, as, say, The Squad would aver, deeply “problematic”, riddled with inequality, racism, and capitalism.  It may be trite to say this, but if America is so horrible, why are people crowding our borders to get in?

. . . Obama was a straddler, of course, and did not deny that “so many of the disparities that exist in the African-American community today can be directly traced to inequalities passed on from an earlier generation that suffered under the brutal legacy of slavery and Jim Crow.” I don’t deny that either. Who could? But neither did he deny African-American agency or responsibility:

It means taking full responsibility for own lives — by demanding more from our fathers, and spending more time with our children, and reading to them, and teaching them that while they may face challenges and discrimination in their own lives, they must never succumb to despair or cynicism; they must always believe that they can write their own destiny.

To say this today would evoke instant accusations of being a white supremacist and racist. That’s how far the left has moved: Obama as an enabler of white supremacy. You keep asking: what happened to me? I remain an Obamacon, same as I always have been. What, in contrast, has happened to you?

44 thoughts on “Andrew Sullivan on the death of “true liberalism””