Readers may recall that last spring I began what Jerry called a “mini-MOOC” on evolutionary biology. Because I began making posts fairly late in the semester, I got to only seven installments before the semester ended. I’m teaching the same course, BIOS 314 Evolutionary Biology, this spring, and so I’d like to start up again.

In the class I have the students read a series of what I regard to be classic papers or extracts–—one each week—and these are what I want to share with WEIT readers. Each reading is accompanied by a brief biography and illustration of the author, and a small number of study questions, designed to guide the student in understanding the reading. I sometimes assign these questions as homework essays, or include them on exams. When possible, I will provide links to the readings. The installments so far have been Charles Darwin, A.W.F. Edwards, George Gaylord Simpson, Charles Lyell, Alfred Sherwood Romer, Alfred Russel Wallace, and Richard C. Lewontin. We pick up with Theodosius Dobzhansky. Dobzhansky was a key figure in the “Modern Synthesis” of evolutionary biology in the 20th century (as described below). Jerry had intended to do his doctoral work with “Doby” (as he was known later in his career; students from earlier knew him as “Dodik”), but wound up studying with Dick Lewontin, who had been a student of Doby’s, and thus Jerry is Doby’s academic grandchild. 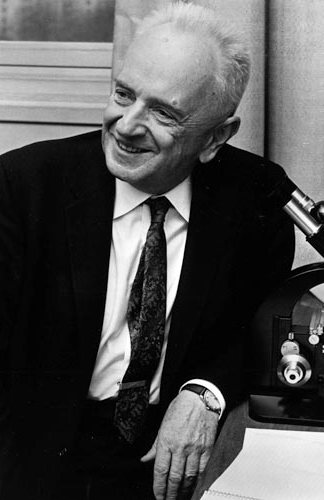 Theodosius Dobzhansky (1900-1975) was a Russian-American geneticist who was arguably the most important evolutionary biologist of the 20th century. Completing (although never formally receiving) an undergraduate degree at the University of Kiev, he began his career conducting field studies of coccinellid beetles and laboratory experiments on Drosophila. In 1927 he received a fellowship to come to America and work with T. H. Morgan at his famed “fly room” at Columbia University. As a geneticist working at the epicenter of American genetics, Dobzhansky was well aware of the important empirical and theoretical advances being made in genetics; as a field worker and experimentalist, he was able to tie these developments more closely into the phenomena of natural populations. He synthesized the theoretical, experimental, and field approaches in his classic book Genetics and the Origin of Species (1937). It was through this book, much more so than through the previous synthetic, but more theoretical, works of Fisher, Haldane and Wright, that the biological community as a whole became aware of the developments in evolutionary biology, and the book inspired an outpouring of work carried on in the same synthetic spirit. Dobzhansky is well known for his two aphorisms, “Nothing in biology makes sense except in the light of evolution”, and “Heaven is where, when the experiment is over, you don’t need statistics to figure out what happened.” His major works include Genetics and the Origin of Species (3rd ed., 1951), Mankind Evolving (1962) and Genetics of the Evolutionary Process (1970). His monumental 43-paper series on the “Genetics of Natural Populations” (1938-1975) has been reprinted, with extensive historical and biographical commentary, as Dobzhansky’s Genetics of Natural Populations I-XLIII (1981), edited by Lewontin, Wallace, Moore, and Provine.

1. What is blending, as opposed to particulate, inheritance? What are the consequences of the two sorts of inheritance for the evolutionary process? What analogy does Dobzhansky use to illustrate the effect of blending inheritance?

2. How does Dobzhansky see the “stored” genetically variability of natural populations and the generally deleterious nature of mutations nonetheless leading to populations being adapted to their conditions of existence?

3. Can a phylogeny be estimated for infraspecific variants? [We usually think of phylogeny being estimated for species, so that we can say, for example, lions and tigers share a more recent common ancestor than either does with the house cat. But could we construct a phylogeny for, say breeds of house cat? Or subspecies of tiger? Or mitochondrial haplotypes of the lion? See Dobzhansky’s Fig. 4 (p. 113 in the reading) for his answer.]