Our sixth installment is a paper by Alfred Russel Wallace. Written while he was still collecting in the Malay Archipelago, it is a foundational work in zoogeography, in which Wallace invokes a long history of evolutionary changes of organisms, and geographical changes of the land and water, to account for organisms’ current distributions and affinities. Readers may recall that 2013 was the centenary of Wallace’s death, and that we posted a series of commemorative posts on Wallace here at WEIT to celebrate his accomplishments during that year.  (Follow this link for many WEIT postings on Wallace.) 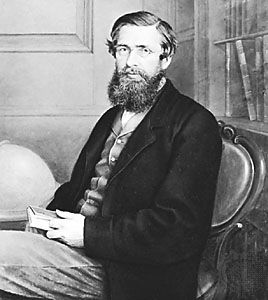 Alfred Russel Wallace (1823-1913) was co-discoverer, with Charles Darwin, of natural selection. A gentleman but from a family of lesser means than Darwin, he was largely self-taught. He first made a name for himself by conducting an expedition to the Amazon (1848-1852) with Henry Bates; unfortunately, most of his specimens were lost when his ship sank on the return to England. Setting out again on a natural history collecting expedition, he traveled in the Malay Archipelago from 1854-1862. It was at Ternate in 1858, that, during a bout of malaria, the concept of natural selection came to him. Wallace is widely acknowledged as the greatest figure in the history of zoogeography. A lifelong friend of Darwin, in later life he became a staunch public advocate of socialism and, much to the chagrin of his scientific colleagues, spiritualism. His books include The Malay Archipelago (1869), Contributions to the Theory of Natural Selection (1870, a collection of his papers, including the important ‘Sarawak’ and ‘Ternate’ papers), his monumental The Geographical Distribution of Animals (1876), Island Life (1880), and Darwinism (1889). Andrew Berry has edited a wide ranging anthology of Wallace’s writings, Infinite Tropics (2002).  All of Wallace’s published works are available at John van Wyhe’s superb Wallace Online.  A modern, scientific biography is Peter Raby’s Alfred Russel Wallace: A Life (2002).

Reading:
Wallace, A.R. 1860. On the zoological geography of the Malay Archipelago. Journal of the Proceedings of the Linnean Society, Zoology 4:172-184.

Study Questions:
1. The comparison of which particular islands’ faunas helped Wallace epitomize the nature of the boundary between the Indian (= Oriental) and Australian regions? What are the geographic, climatic, and geological circumstances of these islands? What are their faunal differences and similarities?

2. What importance does Wallace place on the depth of the sea? Show how he uses it in accounting for the geographical distribution of animals.

3. What explanatory principles does Wallace invoke to explain the phenomena he discusses? What do these principles reveal about Wallace’s thinking at the time he wrote this paper?