Yesterday I reported on the fracas about a Caucasian woman from Utah, Keziah Daum, who wore a qipao (also called a “cheongsam”), a form-fitting Chinese-style dress, to her senior prom. She found the dress in a vintage clothing store and admired it. For this gross breach of propriety, she was called out by many people for “cultural appropriation.” First, here’s the dress on Ms. Daum: 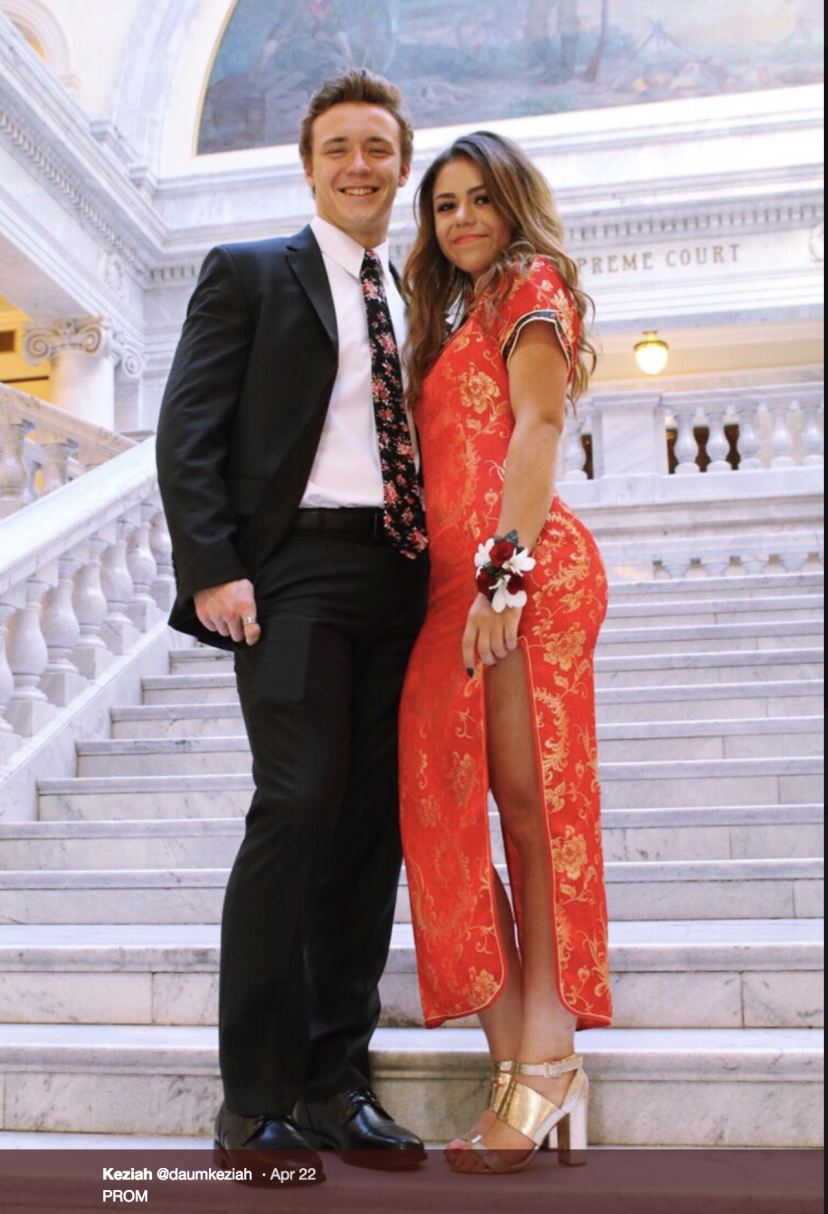 The qipao is a special dress, one invented in Shanghai in the 1920s and worn by socialites of the upper class. Further, I didn’t think of the possibility that its form-fitting nature may actually have been influenced by Western styles, which becomes more plausible if you read about its origins and alterations (from Wikipedia):

The original qipao was wide and loose. It covered most of the woman’s body, revealing only the head, hands, and the tips of the toes. The baggy nature of the clothing also served to conceal the figure of the wearer regardless of age. With time, though, the qipao were tailored to become more form fitting and revealing.

The modern version, which is now recognized popularly in China as the “standard” qipao, was first developed in Shanghai in the 1920s, partly under the influence of Beijing styles. The streamlined and body-hugging cut of the modern cheongsam was popularized by the socialite and one-time First Lady of China Madame Wellington Koo. Voted several times by Vogue into its lists of the world’s best-dressed women, Madame Wellington Koo was much admired for her adaptations of the traditional Manchu fashion, which she wore with lace trousers and jade necklaces. Cheongsam dresses at the time had been decorously slit a few inches up the sides, but Madame Koo slashed hers to the knee, ‘with lace pantelettes just visible to the ankle’. Unlike other Asian socialites, Madame Koo also insisted on local Chinese silks, which she thought were of superior quality.

People eagerly sought a more modernized style of dress and transformed the old qipao to suit their tastes. Slender and form fitting with a high cut, it had great differences from the traditional qipao. It was high-class courtesans and celebrities in the city that would make these redesigned tight fitting qipao popular at that time. In Shanghai it was first known as zansae or “long dress” (長衫—Mandarin Chinese: chángshān; Shanghainese: zansae; Cantonese: chèuhngsāam), and it is this name that survives in English as the “cheongsam”.

If you click the link on Madame Wellington Koo above, you’ll learn that she served as China’s nominal first lady for a year, but was also an international socialite, living in Paris and New York.  (Her Chinese name was Oei Hui-lan, 黃蕙蘭.) She also frequently wore Western clothes (see photo below), but I suppose nobody accused her of cultural appropriation. Well, that wasn’t in vogue back then (though Ms. Koo was in Vogue as a “style icon”), but my point is that it’s certainly plausible that Koo changed the baggier dress to a form-fitting style because she was influenced by Western dresses. In that case the qipao is itself a form of cultural appropriation that’s been “reverse appropriated.”

As for Chinese people wearing jeans, having Western names, and wearing Western suits, a new piece in the Independent explains why that’s okay (click on screenshot):

The author is Eliza Anyangwe, described on YouTube a “Cameroon-born, London-based freelance journalist and founder of The Nzinga Effect.com, a platform to celebrate African women’s stories. She naturalised in Britain but her parents are South African residents, living and working here. She is an example of a phenomena that is called the third culture children, who can’t lay claim to one culture because they are constantly on the move. Eliza joins us in the studio to tell us more about the Third culture Movement.” (my emphasis).  In the video she says that the “third culture” people float between several different cultures, which means they can appropriate elements of any culture. Isn’t that convenient? If I have genes from Ireland, as I might, is it okay if I wear green on St. Patrick’s Day?

As you can tell from Anyangwe’s title, she takes an extreme position—so extreme that she sees wearing a qipao as an element of systemic oppression practiced by whites. But Chinese people wearing suits aren’t oppressing Westerners.  Why? Anywangwe tells us (my emphasis):

Daum does not deserve online abuse, no one does, but the debate her prom pictures have prompted is justified. Cultural appropriation is about power, and to many she’s the embodiment of a system that empowers white people to take whatever they want, go wherever they want and be able to fall back on: “Well, I didn’t mean any harm.”

Yes, the qipao can probably be acquired fairly cheaply anywhere in the world where there’s a Chinese store, and in the same way that jeans are part of US cultural imperialism, there are certainly some in China who would see Daum’s sartorial choice as an extension of Chinese soft power – but whichever way you look at it, it wasn’t “just a dress”.

. . . Of course, it’s not just white people who are capable of appropriation (black people wearing bindis to music festivals has always irked me) – but it is unfair, enraging and a reflection of more deeply rooted inequalities when young people from various ethnic minorities are ridiculed for wearing their traditional dress; when they fight their afro hair into submission or dream of surgery on their eyelids, all so that they fit a white ideal.

Well, there you have it. The adoption of Western clothes by Chinese is the U.S.’s fault—cultural imperialism! But how does that work? Did Levi Strauss force the Chinese to wear their gear? I doubt it. Rather, the Chinese like jeans, either for their comfort or as an appropriation of Western style. Whatever the reason, it’s cultural appropriation—but not to Anyangwe. As the saying goes, “When WE do it, it’s okay!”  Either that or “We were forced to do it by those Western imperialists.”  Her last sentence is simply window-dressing, for the kinds of “black cultural appropriation” she mentions can be imputed to white imperialism.

How ludicrous this is! Are Asians oppressed in the U.S.? And is the qipao an item of clothing ever worn by oppressed Chinese? The answer to both questions is “no.” Anyangwe’s rationale is the same as the rationale for saying that blacks and Hispanics can’t be racist, because racism supposedly equals oppression plus power. To Anyangwe, cultural appropriation equals borrowing plus power. In both cases the “power” part has been added to excuse one group from what they impute to other groups as bigoted behavior. But wearing a qipao is not bigotry—it’s an expression of admiration for a dress style. As Seth Andrews has said, Anyangwe and the other critics of Daum’s dress are practicing “recreational outrage” (something I’ve called “leisure fascism”, but I like Seth’s term better). While some forms of cultural appropriation are worthy of being called out, this isn’t one of them.

For a palliative to the rant of Ms. Anyangwe, read the article below, also in The Independent, by Kassie Draven (click screenshot), who identifies herself as “Samoan, and part German, Dutch and British.”

The qipao itself was culturally appropriated from Western figure-hugging dress designs as early as the 1920s, and was intended to be a luxurious evening gown. Did Keziah not wear it for its intended purpose? If so, how was she being in any way, shape or form disrespectful?

Personally, I think it’s deeply conservative to tell people what to wear, let alone what they can and can’t enjoy, based on their race or outward appearance. As someone who wants equality for all and for racism to end, I find it worrying to hear people discouraging the mixing and appreciation of other cultures. That mixing is actually the driving force towards acceptance and positive anti-racist change.

No culture is ‘pure’, as in completely removed from influences of other cultures around it. Humans have culturally appropriated ideas from each other since time immemorial. We in the West scoff our Pop Tarts (surely descended from the Cornish pasty? Don’t quote me on that!), use maths (which Arabs developed from the ideas of the ancient Greeks and Indians) and enjoy the comfort of electricity (which many different people from all backgrounds contributed towards harnessing) as we tap away on Twitter, quick to forget that what makes us great isn’t necessarily what makes us different; it’s the things we learn and share among each other despite being different.

In other words, what makes us great is cultural appropriation. To oppose it would be madness.

Indeed! Although, as I’ve said, some acts of “cultural borrowing” are unsavory, in general it’s not only harmless but salubrious. Opposing things like eating ethnic food or wearing ethnic garb is madness, and Anyangwe is truly mad—in both senses of the term. Those senses, of course, tend to go together.

76 thoughts on “More on “cultural appropriation” of the Chinese dress”