Some people are permanently poised to be offended; in fact, you’d think they get pleasure out of being offended.

One of the topics that often triggers unwarranted offense is cultural appropriation—the adoption by one culture or ethnicity of food, clothing, music, or other aspects of a different culture.  In principle this could be offensive, as in the use of blackface, but more often than not it’s simply the appreciation by one culture of another. BuzzFeed (click on screenshot below) and other sites like the Washington Post and the BBC describe a particularly ridiculous example: 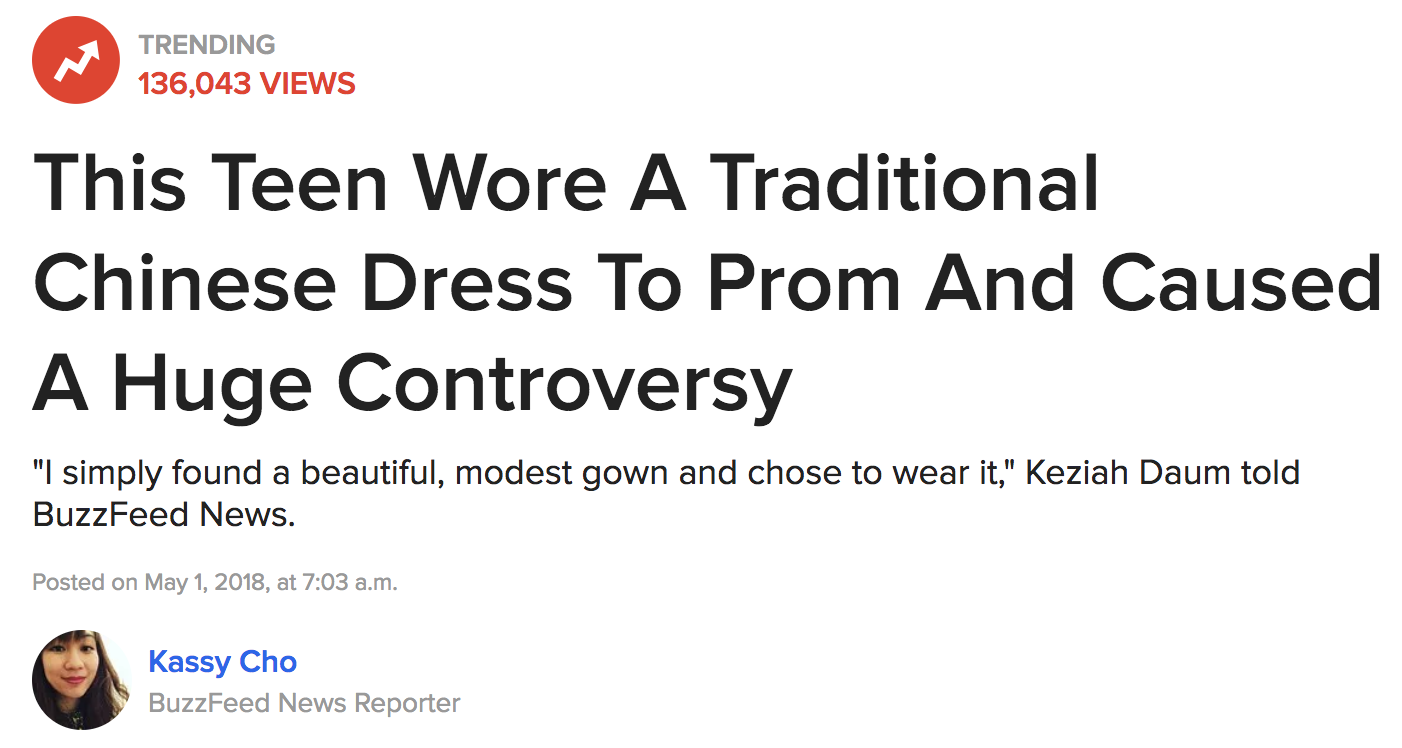 What happened is that 18 year old Keziah Daum, a high school student from Utah, decided to wear to her senior prom a quipao, or traditional Chinese dress with a high neckline and slit skirt. While this was worn in China (and still is by societies that try to preserve the dress style), it was really a form of women’s clothing invented in Shanghai in the 1920s and limited to wealthy socialites. Here, for example, is a quipao society I photographed in a mall in Macao on my last visit to Hong Kong: 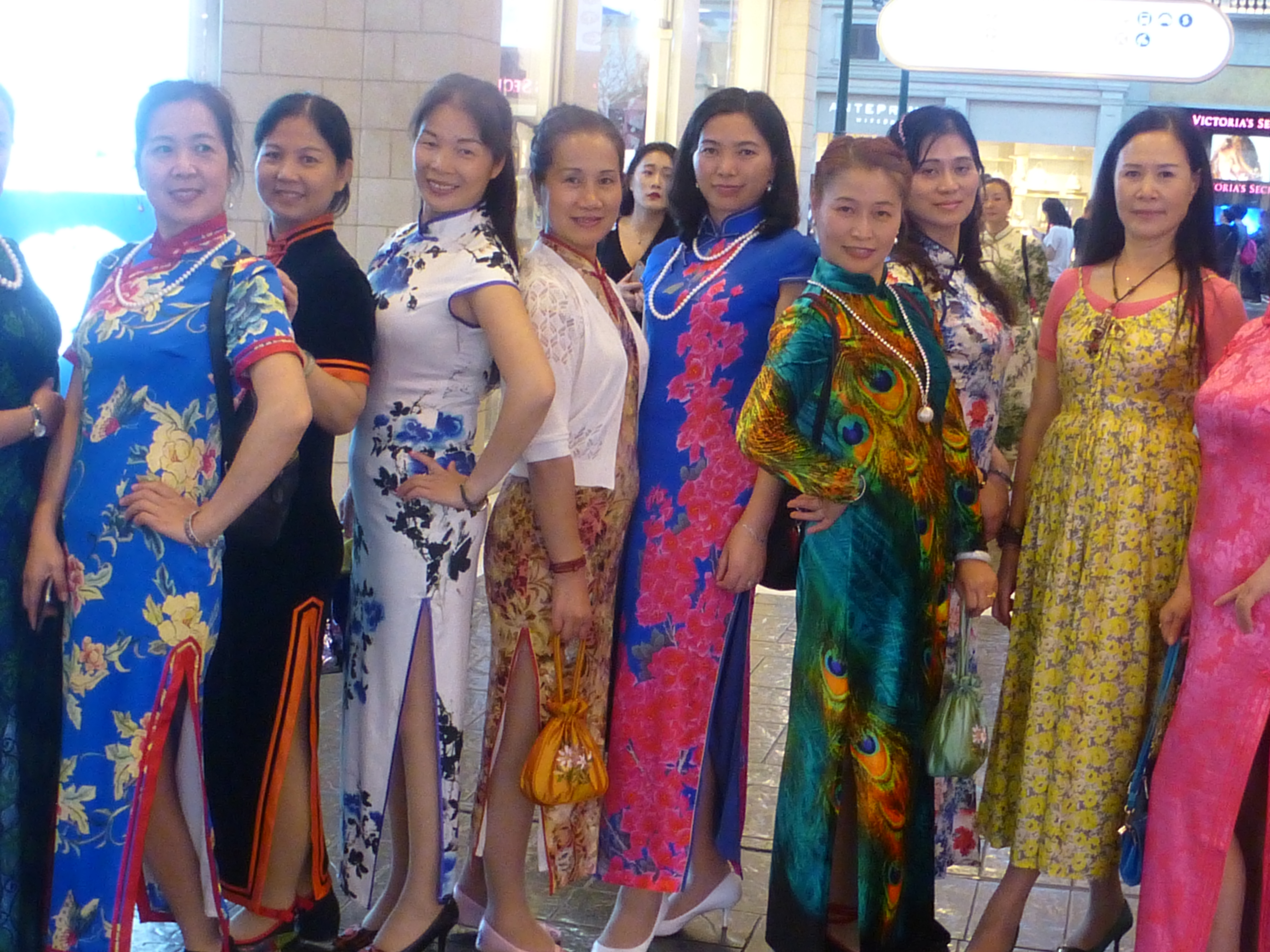 Well, Ms. Daum made the deadly mistake of liking a quipao she saw in a Salt Lake City vintage clothing store, saying that she was “immediately drawn to the beautiful red grown and was thrilled to find a dress with a modest neckline.” She wore it to the prom and posted the following pictures on Twitter.

You can see the four sub-pictures by clicking on her tweet, but here are three of them. Daum looks lovely, though of course the last picture might be considered offensive by some. I don’t, as it’s not making fun of a culture but imitating (I think) a gesture thought to be Chinese (it’s also Indian, Nepalese, and used in many other countries): 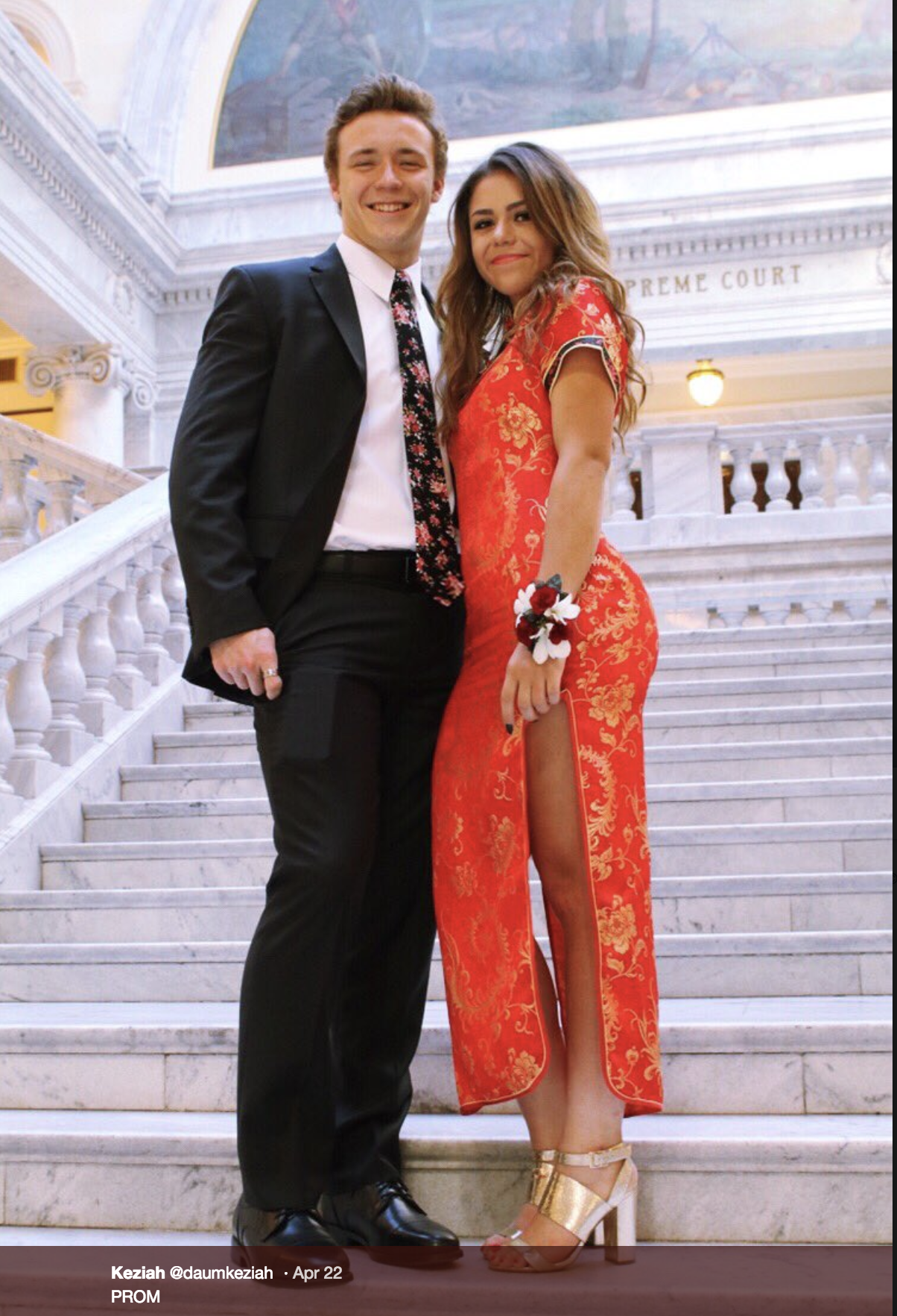 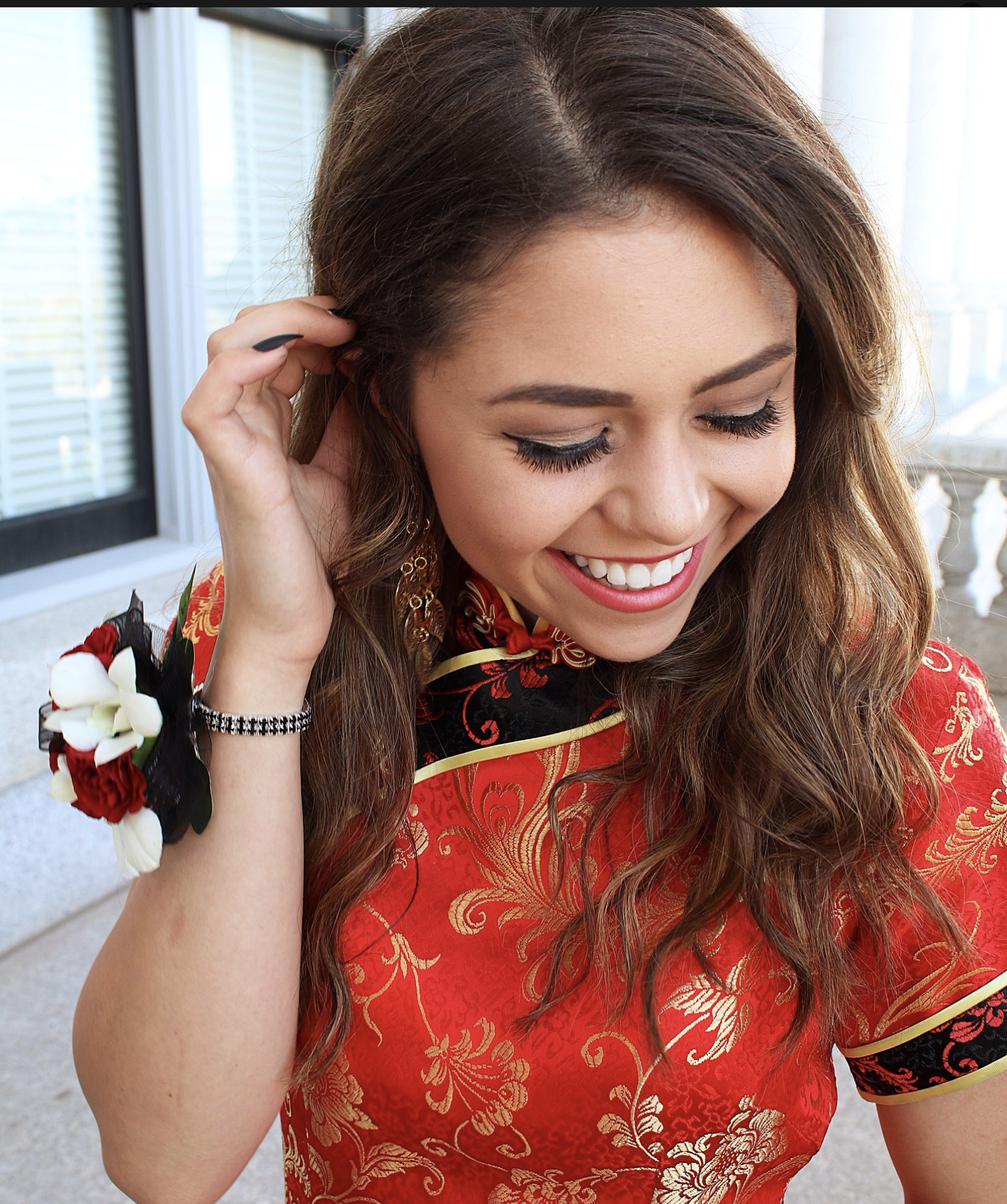 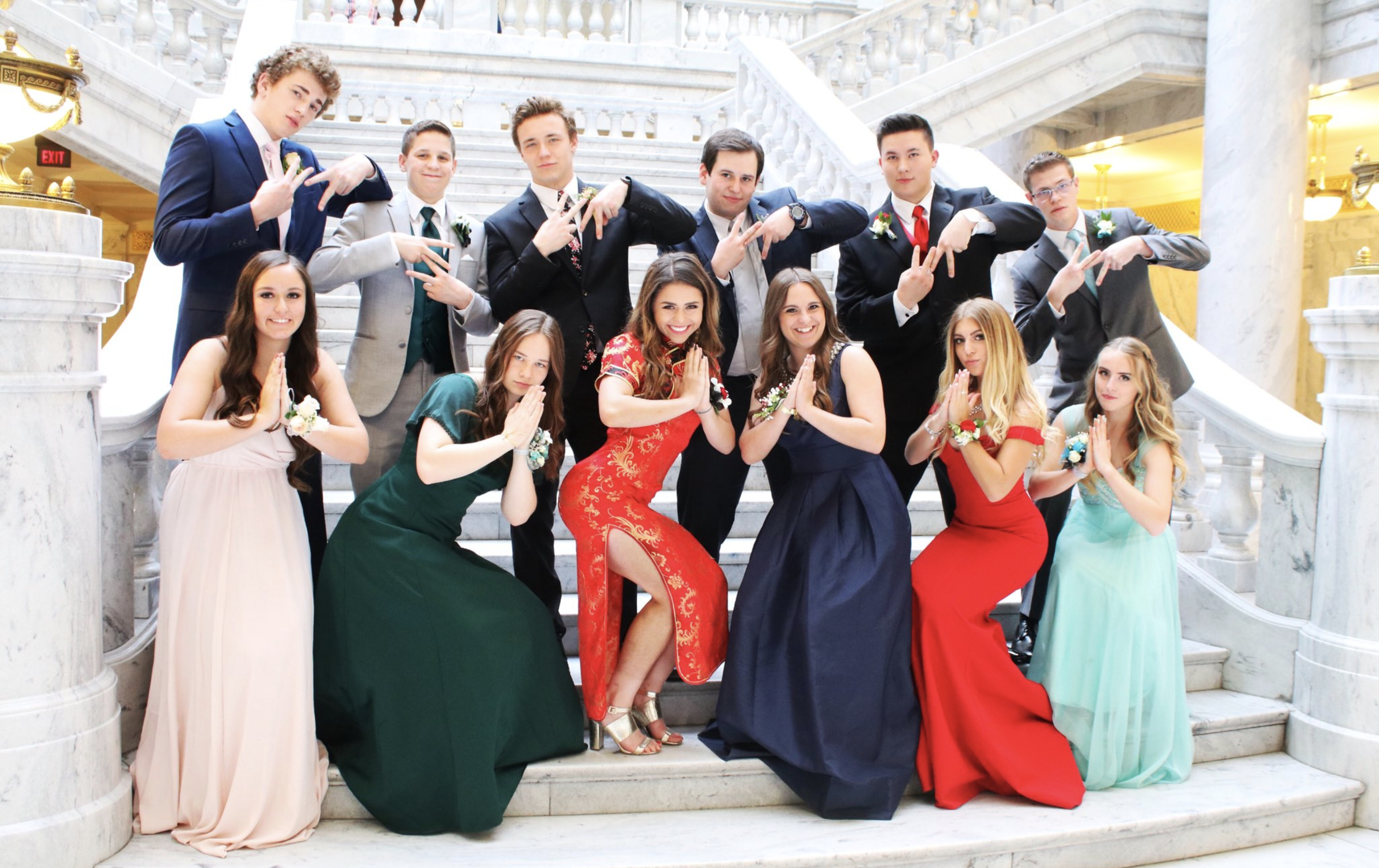 Well, you can question the wisdom of the last photo, but believe me, this fracas would have happened had just the other pictures been posted. Sure enough, Jeremy Lam, a student at the University of Utah, took great offense and posted this tweet: 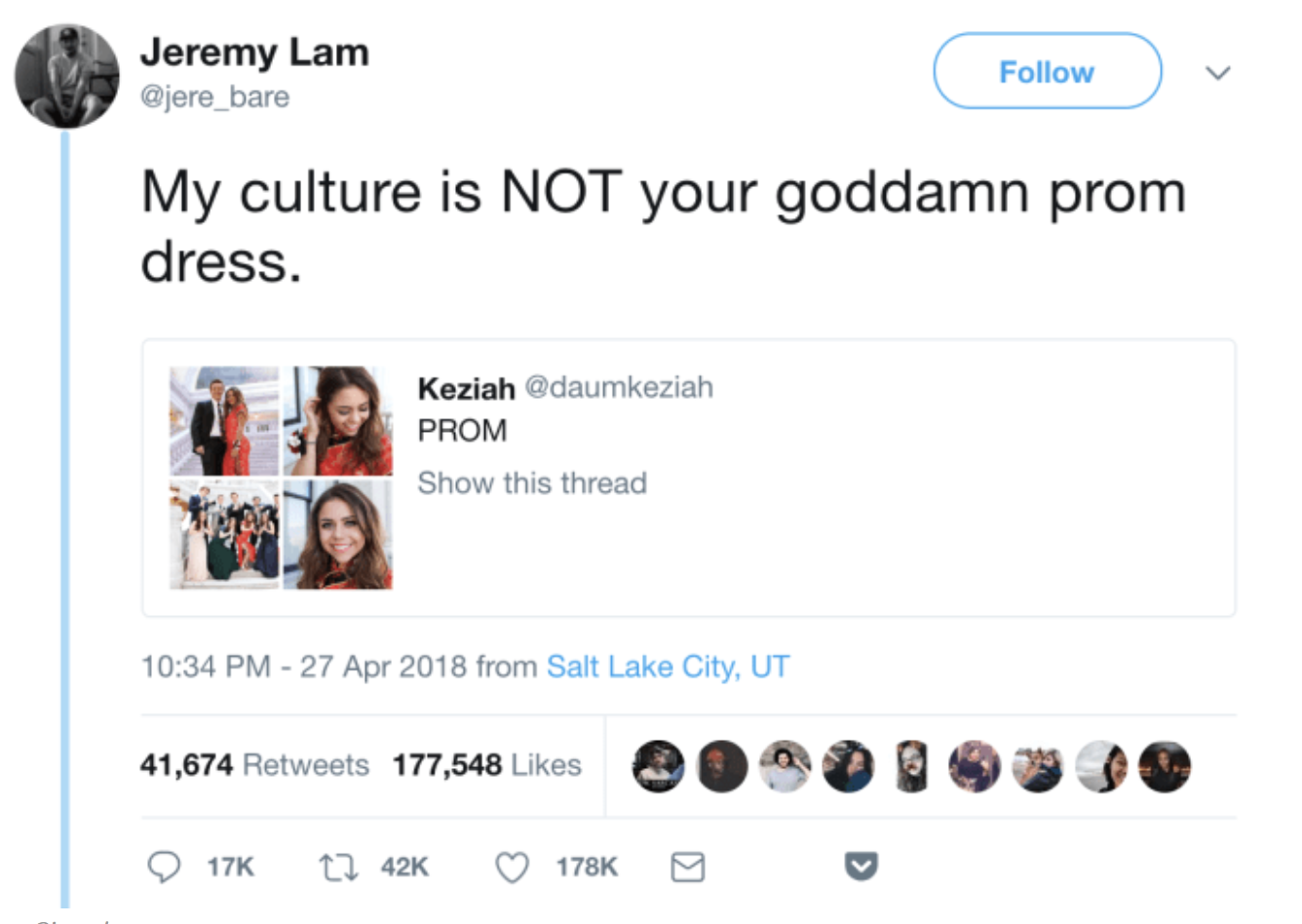 As you see, it got 17,000 comments and was retweeted 42,000 times. As you might expect, though Daum had her defenders, she only got those defenders because of the spate of people who called her out for “appropriating” a “traditional dress with a long history and making it into a fashion statement.” Well, the dress doesn’t have a long history, was limited to the upper classes, and is supposed to be a fashion statement. If the dress represents “Chinese culture”, it is only a very narrow segment of Chinese culture. (If a lower-class Chinese woman wore it, would that be considered “class appropriation”?).

Daum, as might be expected, was sandbagged, not expecting this at all, and was hurt. You can see all the negative and supportive comments at BuzzFeed (it turns out Jeremy Lam had engaged in even more impure forms of cultural appropriation in previous tweets.) But she even tried to be nice about it:

“I never imagined a simple rite of passage such as a prom would cause a discussion reaching many parts of the world,” Daum said. “Perhaps it is an important discussion we need to have.”

She said that she was sorry if she had caused any offense, and that her intent was never to anger anyone.

“I simply found a beautiful, modest gown and chose to wear it,” she said.

No, we don’t need to have a conversation about her wearing a quipao as a prom dress. It’s not insulting and wasn’t intended to be. It was the best kind of cultural appropriation: the adoption of some aspect of culture that you admire. Yes, we can and should talk about blackface, Mexican sombreros, and the like, but if we’re going to talk about cultural appropriation, how about this site, showing Asian workers adopting “dress-for-success” fashion, which happens to be Western? How about if we talk about the limits of “offensive” cultural appropriation? 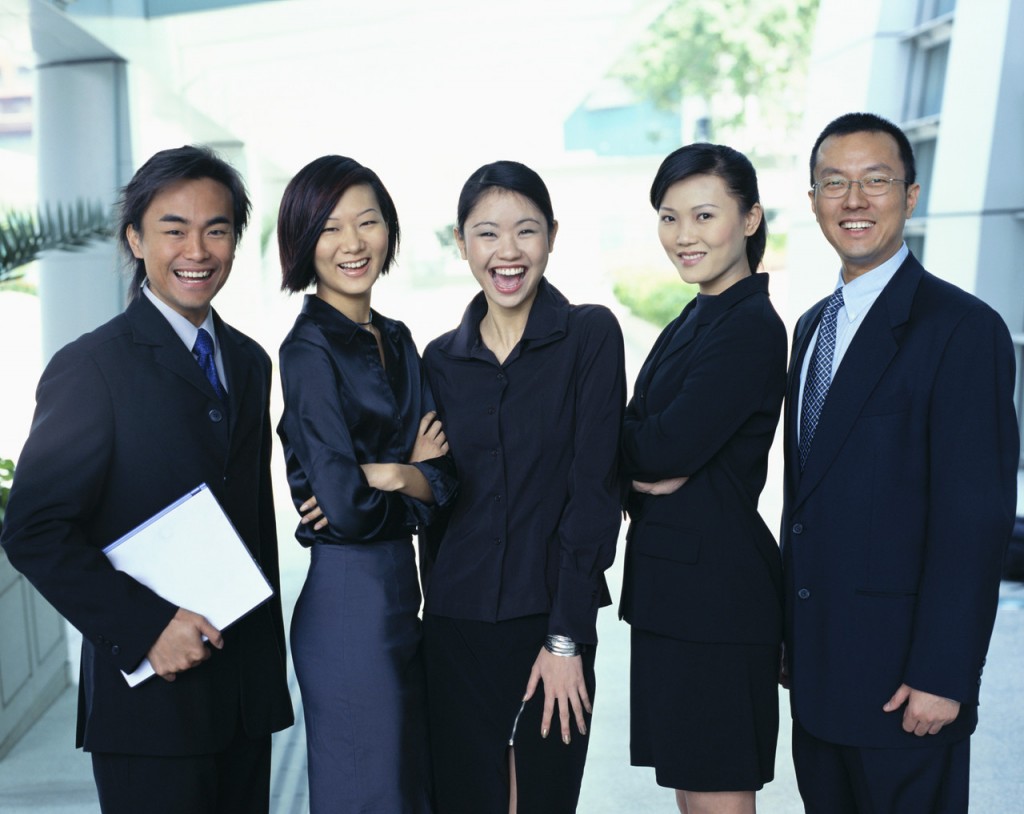 Isn’t the picture above an example of cultural appropriation? If not, why not? After all, at least in the U.S. Asians enjoy a social and academic advantage over Caucasians; so if “punching down” is worse than “punching up”, Asians wearing Western suits would be the graver sin.

But this is all nonsense. Cultures intertwine and enrich each other; I can’t imagine the U.S. without the musical, culinary, linguistic, and artistic contributions of non-Caucasians (I won’t say “other cultures” because all of us descend from immigrants). We wouldn’t have the great musical form of jazz without the African-Americans who invented it, and yet its adoption by cultures worldwide occurred without the supposedly negative aspects of “cultural appropriation.” That’s another example of cross-fertilization of cultures.

Making a poor high school woman feel awful about her choice of dress is something that these misguided Social Justice Warriors like to do. It accomplishes nothing positive; all it does is make the “appropriators” feel bad and the puritans feel good about themselves. Can you tell me if anything positive came out of this?